Military orders and medals of the Soviet Union. Order of Victory

February 20 2014
16
The 1943 year was a watershed year in World War II. This year, after a series of fierce and bloody battles, the Red Army seized the initiative on the Eastern Front and began liberating the country from the Nazi occupiers. The battles for Moscow and Stalingrad, the Kursk Bulge, the liberation of Kiev - these are the milestones that became the key battles of the Great Patriotic War. During this period, it was decided to establish a new military order, which was to become the highest commander's award. Decree of the USSR Supreme Council on the establishment of the highest military order "Victory" was signed on November 8 1943 of the year. Award to the order could only persons of high command.


The samples and the description of the ribbon of the new order, as well as the rules for wearing them, were approved in August 1944. The initial sketch of the award was presented by N. S. Neelov, one of the officers of the rear headquarters. At first it was planned to name the new order “For Loyalty to the Motherland”. However, Stalin rejected this name. General of the Army A. V. Khrulev reassigned the work on another sketch of the order to the head of the Red Army Army, at that time, to the artist A. I. Kuznetsov, who was already noted when creating Soviet awards. In particular, he worked on the creation of a sketch of the Order of Lenin and the Order of the Patriotic War. Initially, at the center of the new order, Kuznetsov wanted to place profile chest bas-reliefs of Lenin and Stalin. That is how Neyol proposed in his project. Also considered the option of placing in the center of the award of the State Emblem of the Soviet Union. However, in the final version in the center it was decided to place an image of the Spasskaya Tower of the Moscow Kremlin, and of all the options presented, Stalin chose the one on which was the inscription "Victory".

Established in 1943, the Victory Order became the highest military order in the country. The Order “Victory” could be awarded to persons of the highest command personnel of the spacecraft for the successful conduct of combat operations on a scale of one or a number of fronts, the result of which radically changed the situation in favor of the Soviet troops. Awarding the Order “Victory” could only be made on the basis of the Decree of the Presidium of the USSR Supreme Soviet. Also, for all those awarded with this order, a memorial plaque was established as a sign of special distinction. On this plaque, which was located in the Grand Kremlin Palace, all the names of the gentlemen of the Victory Order were placed. 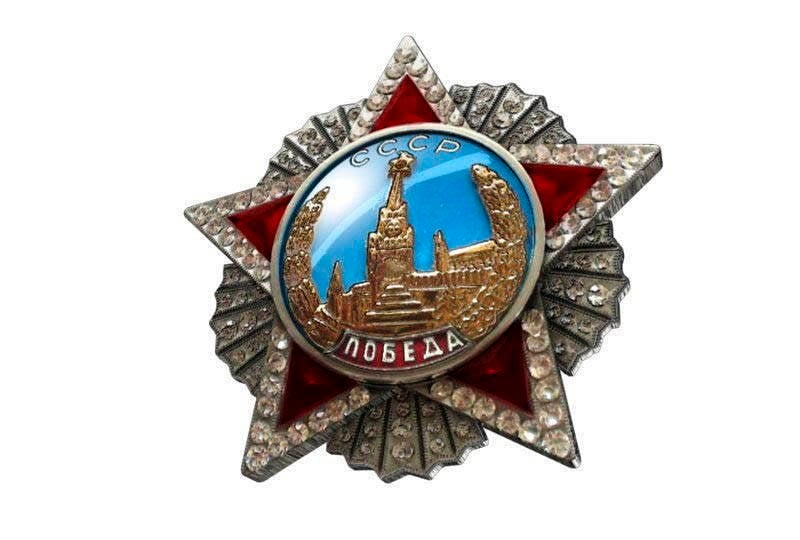 It is worth noting that the Order "Victory" was one of the most beautiful and most expensive among all the awards of the Soviet Union. The Order “Victory” is a five-pointed, bulging ruby ​​star, bordered with diamonds. Between the ends of the five-pointed star there are diverging rays, which are also studded with diamonds. The center of the star is a circle, bordered with a laurel-oak wreath and covered with blue enamel. In its center there is a golden image with a part of the Kremlin wall with Lenin's mausoleum and the Spasskaya Tower located in the center. Directly above this image is the inscription "USSR", made in white enamel letters. At the bottom of the circle on the enamel ribbon of red color, the inscription “Victory” is made (all capital letters are covered with white enamel). The distance between the opposite ends of the star is 72 mm, the diameter of the circle on which the Spasskaya Tower is depicted is 31 mm.

The badge of the order is made of platinum. Platinum, gold, silver, 174 small diamonds, 5 imitation rubies in the star's rays, as well as enamel are widely used to decorate the award. The total mass of the award is 78 g. At the same time, the Victory Order contains 47 g of platinum, silver - 19 g, gold - 2 g. The total weight of diamonds used is 16 carat, the weight of each of 5 rubies is 5 carat.

On the back of the Order "Victory" there is a threaded pin with a nut, which are designed to fasten the order to the uniform and other clothes. A silk moire ribbon with a width of 46 mm, its height 8 mm also relied on the order. There was a wide 15-mm red stripe in the middle of the ribbon. On the sides, closer to the edges of the ribbon, were strips of green, blue, burgundy and light blue colors. Bordered ribbon black and orange stripes. This tape was worn on the left side of the chest on a special plank, located on 1 cm above all the other order ribbons. The Victory Order itself was also worn on the left side of the chest on an 12-14 cm above the belt.

Since the production of this award required a large amount of precious metals, as well as rubies and diamonds, the execution of the order for its release was entrusted not to the Mint, but to the masters of the Moscow jewelry-watch factory. This was a unique case in Soviet practice. It was planned to issue a total 30 orders "Victory". In the process of working on the Order, I. F. Kazyonov, who is a master of the highest qualifications of the Moscow jewelry-watch factory, faced some difficulties. The rubies occurring in nature had different shades of red, so it was simply impossible to collect even one order from them, enduring color. Taking this into account, it was decided to use in its manufacture artificial rubies, from which it was always possible to cut the required number of blanks of the same color. 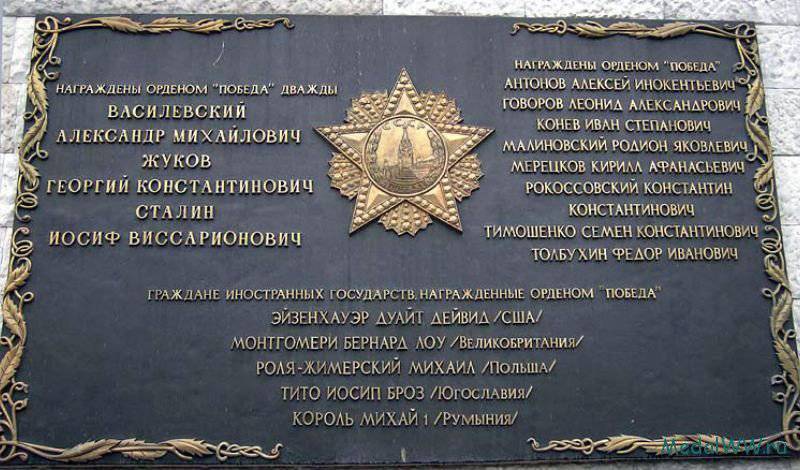 The Order “Victory” for the number 1 was awarded to G. K. Zhukov, commander of the 1-th Ukrainian Front, for the successful liberation of Right-Bank Ukraine. The great Soviet marshal received his second order already on March 30 of 1945, commanding the troops of the 1 of the Belorussian Front (for the skillful accomplishment of the tasks of the High Command). In addition to him, Marshal AM Vasilevsky and Supreme Commander IV Stalin were twice awarded.

A. M. Vasilevsky, Chief of the General Staff (later commander of the 3 of the Byelorussian Front): awarding 10 on April 1944 of the year and 19 of April 1945. The reason for awarding: for the liberation of the right-bank Ukraine and for the planning of military operations and the coordination of actions of the fronts.

JV Stalin, Supreme Commander: awarding 29 July 1944 of the year and 25 June 1945 of the year. The reason for awarding: for the liberation of the right-bank Ukraine and for the victory over Germany.

Marshal I. S. Konev: awarding 30 in March 1945. The reason for the award: for the liberation of Poland and forcing the Oder.

Marshal R. Ya. Malinovsky: awarding 26 on April 1945. The reason for awarding: for the liberation of the territories of Austria and Hungary.

Marshal F. I. Tolbukhin: 26 award on April 1945. The reason for awarding: for the liberation of the territories of Austria and Hungary.

Marshal L. A. Govorov: awarding 31 May 1945. The reason for awarding - for the defeat of the German troops near Leningrad and in the Baltic States.

S.K. Tymoshenko, representative of the Supreme Commander’s Headquarters: awarding 4 June 1945. The reason for awarding: for planning combat operations and coordinating the actions of the fronts.

Army General A.I. Antonov, Chief of General Staff: awarding 4 June 1945. The reason for awarding: for planning combat operations and coordinating the actions of the fronts.

Marshal K.A. Meretskov: awarding 8 September 1945 of the year. The reason for the award: for the successful leadership of the troops in the war against Japan. 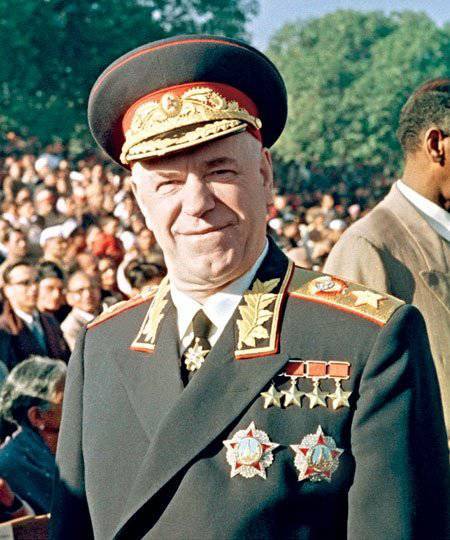 There were among the awarded and foreign citizens. In particular, 5 June 1945 was awarded to field marshal B. L. Montgomery, Supreme Commander of Allied Expeditionary Armed Forces in Western Europe, as well as Army General D. Eisenhower. July 6 1945 was awarded such a high award by the King of Romania, Mihai I. On August 9, the award was given to General M. Roll-Zimersky, the Supreme Commander of the Polish Army. The latest among foreigners (9 September 1945 of the year) was Marshal Joseph-Broz Tito, Supreme Commander-in-Chief of the Yugoslav People’s Liberation Army.

20 February 1978 was awarded the Order of Victory by the Secretary General of the CPSU Central Committee, Marshal of the Soviet Union L.I. Brezhnev. However, after the death of Brezhnev, this award was canceled as a non-statutory award. In total 20 awards were made by the Order of “Victory”, 17 people became his gentlemen. In this case, three were awarded twice, one was deprived of the award posthumously. Marshals Zhukov and Vasilevsky, as well as Stalin were twice awarded the Order “Victory”. All awards, which were presented to Soviet military leaders, as well as the award, which was presented to Marshal of Poland, Role-Zimersky, are administered by the Diamond Fund of Russia. In the private collections today there is only one order, which previously belonged to the Romanian King Mihai I. At present, this order is absent in the award system of the Russian Federation, and the only surviving holder of the order is the King of Romania, Mihai I.