Military orders and medals of the Soviet Union. Order of Glory

February 14 2014
23
The Order of Glory was established on 8 on November 1943 of the year simultaneously with the Order of Victory, at the moment when it became clear that the war would end in victory over Germany. The order was created on the personal initiative of I. V. Stalin and was the most "soldier's order" among all military awards. For the first time, the proposal to create this award was made in June 1943 of the year at a meeting of the People's Commissariat of Defense, at which the draft Order of the Victory was discussed. The main idea of ​​introducing a new order was to reward the rank-and-file and junior commanders of the Red Army for the most diverse heroic deeds committed in battle. This order was issued only for specific achievements, which are strictly regulated by the statute.


The task of developing a new order was transferred to the Technical Committee of the Main Directorate Directorate of the Spacecraft, which at that time was led by Lieutenant-General S. V. Aginsky. The development of the order here began in August 1943 of the year. Above the sketch of the award worked a team of artists from 9. In all, by October 2 of 1943 they prepared the order's 26 projects, of which only 4 was presented to Stalin. As a result, he approved the sketch of the order, which was created by N. I. Moskalev, the author of the medal "Partisan of the Patriotic War", the Order of Kutuzov and all medals for the defense of the cities of the USSR. According to the original plan, the order should have been directly 4 degrees. In this, he had to repeat the pre-revolutionary order of St. George and the "insignia of the military order" - the famous George Cross, one of the most respected royal awards among the people. Initially, the award was planned to be called the Order of Bagration, by analogy with the already existing “commanding orders”. However, Stalin reasoned differently, he offered to call the award the Order of Glory, explaining that “there is no victory without glory,” and also reduced the number of degrees to 3-x by analogy with the “commanding orders”.

The Order of Glory had 3 degrees, the highest of which was considered the first degree. Awarding this order was carried out sequentially: first, the soldier was to receive the order of the III degree, then the II degree and at the end of the I degree. The Order of Glory was awarded to soldiers of the Red Army of sergeants and rank-and-file officers, in addition to this order, servicemen with the rank of junior lieutenant could be represented if they served in aviation. It is interesting to note such a detail: the full cavaliers of the Order of Glory had the right to receive an extraordinary military rank. Thus, ordinary and junior command personnel (corporals and sergeants) automatically became foremen, foremen - junior lieutenants, and junior lieutenants - lieutenants. 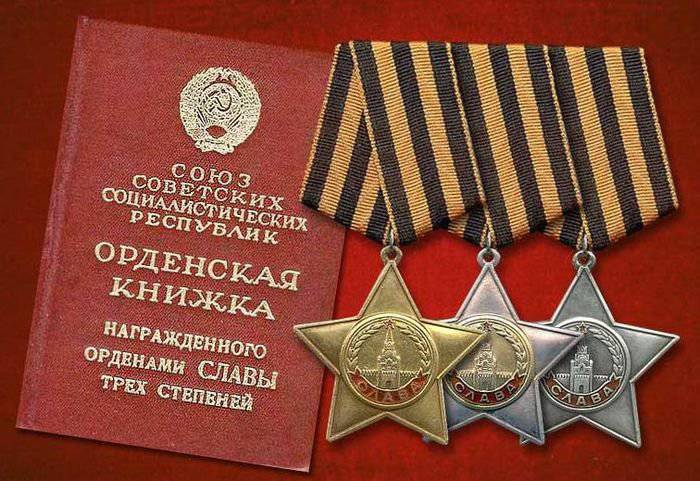 Awarding the Order of Glory was for courage, fearlessness and personal courage shown in a combat situation. The rank and file and junior command staff could be presented to the order for the following committed heroic deeds: with an anti-tank rifle fire disabled at least 2 tanks the adversary; from personal weapons tagged shooting destroyed from 10 to 50 soldiers and officers of the enemy; being in a tanned tank, continued to fight; from personal weapons shot down an enemy plane; after being wounded and bandaged, he returned to service; captured officer of an enemy army; driving a tank, destroyed one or more enemy guns or at least 2 machine gun nests; fighter pilot in one battle that destroyed enemy planes from 2's to 4's; attack pilot for the destruction of a single raid from 2-x to 5-ti enemy tanks. And this is only a small part of the provisions of the statute of this award. In total, there were 32 specific combat situations that suggested awarding the soldier with the Order of Glory.

It is worth noting that the Order of Glory by the Soviet standards was not the most usual order, having a number of features inherent only in it:

1) It was the only Soviet military order that was intended to award only private and non-commissioned officers (and junior lieutenants in aviation).
2) The award of the Order of Glory was made only in an ascending order, from the lowest degree (III) to the highest (I). This order of rewarding in the Soviet Union was repeated only 30 years later in the statutes of the Orders For Service to the Homeland in the Armed Forces of the USSR and Labor Glory.
3) Until 1974, the Order of Glory was the only Soviet order that was issued solely for personal merit and was never issued to military units, organizations, or enterprises.
4) According to the Statute of the Order of Glory, the gentleman of all 3 degrees increased in rank, which was an exception for the entire award system of the USSR.
5) The colors of the order ribbon completely repeated the colors of the pre-revolutionary imperial order of St. George, which for the Soviet Union of Stalin's times was at least unexpected.
6) The design and color of the order ribbon were the same for all 3 degrees of the award, which was also characteristic only for the pre-revolutionary award system and was never used in the Soviet award system. 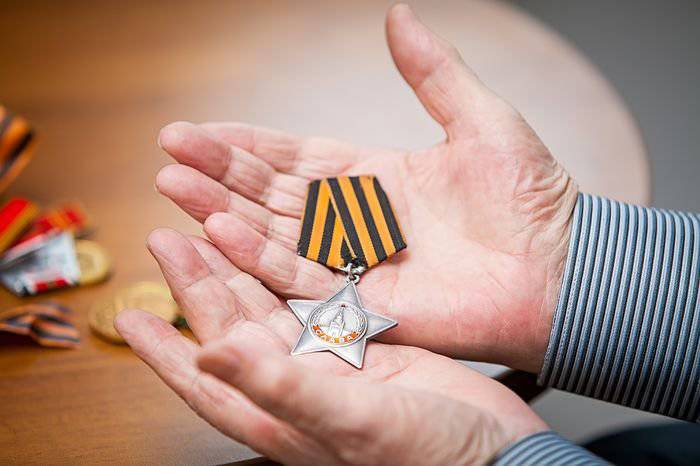 Order of Glory III degree
The Order of Glory was a five-pointed star, the distance between its opposite peaks was 46 mm. In the central part of the five-pointed star was located a round medallion, the diameter of the medallion was 23,5 mm. The medallion depicted the Kremlin's Spasskaya Tower. A laurel wreath passed around the circumference of the medallion. In the lower part of the circle there was an inscription "Glory" (all letters were capitalized), the inscription was placed on a ribbon covered with red enamel. On the reverse side of the award was a circle with a diameter of 19 mm, on which in the middle was the inscription of the USSR. With the aid of the ring and the ear, the reward was attached to a standard pentagonal block, which was covered with a silk ribbon 24 mm wide. The tape contained 5 longitudinal alternating bands: 3 black and 2 orange, the width of the bands was the same. Along the edges of the tape, there was one small orange strip with a width of just 1 mm.

On November 13, the award list was signed on submission to the Order of Glory, Third Degree, sapper senior sergeant V. S. Malyshev, who during the battle managed to get close to the enemy machine gun, which impeded the advancement of the Soviet troops, and destroyed it. Later Malyshev will also receive the Order of Glory II degree. According to other sources, the first award was received by Sergeant G. A. Israelyan, also a sapper. Apparently, Malyshev was the first to present the order, but the award was handed to him later, when Sergeant Israelyan received it. It is worth noting that the orders were sent to various parts of the front in batches, after which they were distributed among the headquarters of the formations, which had the right to award. For this reason, the order that was issued earlier often had a larger number than the award given later. 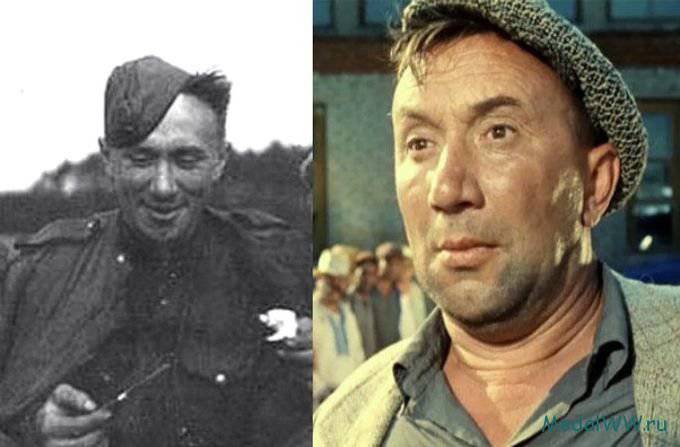 During the war there was a rather interesting case, when a whole subunit - all of its fighters, except for the officers, - was awarded the Order of Glory. This is the 1 Battalion of the 215 Infantry Regiment of the 77 Guards Division. In the battles for the liberation of Poland during the breakthrough of the German line of defense on the Vistula 14 in January 1945, the soldiers of this battalion were able to capture the 3 of a number of enemy trenches and held their positions until the main advancing forces approached. During this battle guard sergeant I.Ye. Petrov repeated the feat of Matrosov, closing the embrasure of the German bunker with his chest. All the rank and file sergeants and sergeants of this battalion became holders of the Order of Glory. The officers also did not remain without awards, platoon commanders were presented to the Order of Alexander Nevsky, company commanders were presented to the Order of the Red Banner, and the commander of the guard battalion, Major B.N. Emelyanov, became the Hero of the Soviet Union (posthumously).

Ctrl Enter
Noticed oshЫbku Highlight text and press. Ctrl + Enter
We are
Diplomats of the People's Commissariat of Defense: on the eve and during the warMilitary orders and medals of the Soviet Union. Medals of the series "For Defense"
Military Reviewin Yandex News
Military Reviewin Google News
23 comments
Information
Dear reader, to leave comments on the publication, you must sign in.