Military orders and medals of the Soviet Union. Order of Nakhimov

January 30 2014
2
For many years there were no special awards for representatives of the Navy in the system of military awards of the USSR fleet, and we are talking about both the pre-war and the war years. The first "marine" awards were established in the Soviet Union only on March 3, 1944. On this day, by Decree of the USSR Supreme Council, two new orders were established: the Order of Ushakov and the Order of Nakhimov. These military awards were intended exclusively for rewarding officers of the Soviet navy, both orders had two degrees, and in the general hierarchy of Soviet military awards they corresponded to the commander orders of Suvorov and Kutuzov. The Order of Nakhimov was the youngest award in relation to the Order of Suvorov.


The idea of ​​developing awards for the officers of the USSR Navy belonged to the commander-in-chief of the Soviet fleet, Admiral of the fleet NG Kuznetsov. Work on the preparation of sketches of new military orders was begun in the summer of 1943. The captain of the 1 rank (later Vice-Admiral) B. M. Khomich, who was the project manager, as well as the captain of the rank 2 N. Volkov, an employee of the Krasnoflotets newspaper A. Diodorov, and a famous Soviet architect M. Shepilevsky. The first sketches of the new orders were not approved by Stalin, who considered that they used too many dark tones. Sketches of awards were sent for processing. As a result, the second version of the Order of Ushakov was immediately adopted and submitted for approval, but the Order of Nakhimov Stalin proposed to decorate with rubies. The wish of the leader, of course, was fulfilled, and the Order of Nakhimov I degree received precious stones, which automatically made him one of the most expensive awards of the USSR. 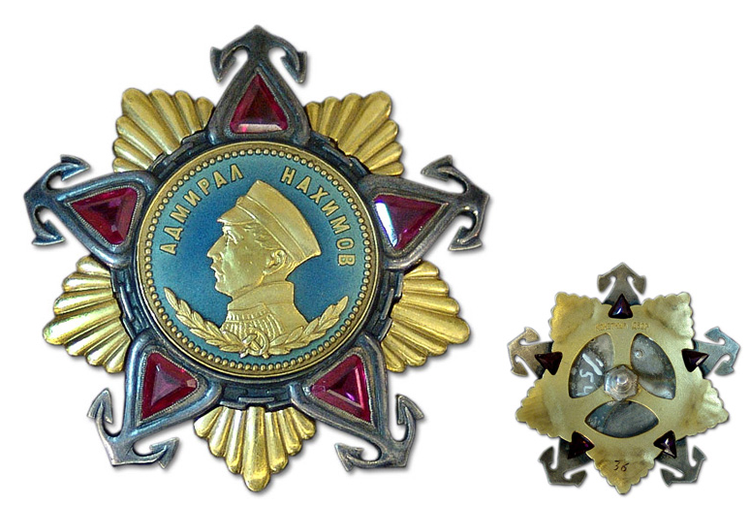 The Order of Nakhimov I degree was a convex five-pointed star, the ends of which were stylized anchors into which rubies were inserted. This star had a black (oxidized) metal edging. The edging and the base of the star are silver. In the middle part of the star there was a round medallion of gold, it was covered with blue enamel. On it in the upper part along the circumference was the inscription "ADMIRAL NAHIMOV" (all capital letters). In the center of the circle there was a gold polished bust of Admiral Nakhimov, the image was embossed. In the lower part of the circle, directly below the admiral's image, there were two laurel branches, in the middle of which there was an image of a sickle and hammer. Between the ends of the ruby ​​star, framing the center of the golden circle, links were laid in the form of an anchor chain, and out of them came bunches of diverging golden rays.

The Order of Nakhimov II degree had the following differences: instead of rubies, the five-pointed star was decorated with red enamel, and the round medallion in the middle of the order, all the images contained on it, as well as beams of rays coming out from under the links of the anchor chain, were made of silver, and not from gold. Both orders had the same size. The distance between the opposite vertices of a ruby ​​star was 56 mm, and the distance from the center of the order to the top of one of the anchors was 29 mm. On the back of the award there was a nut and a threaded pin for attaching the order to the form. 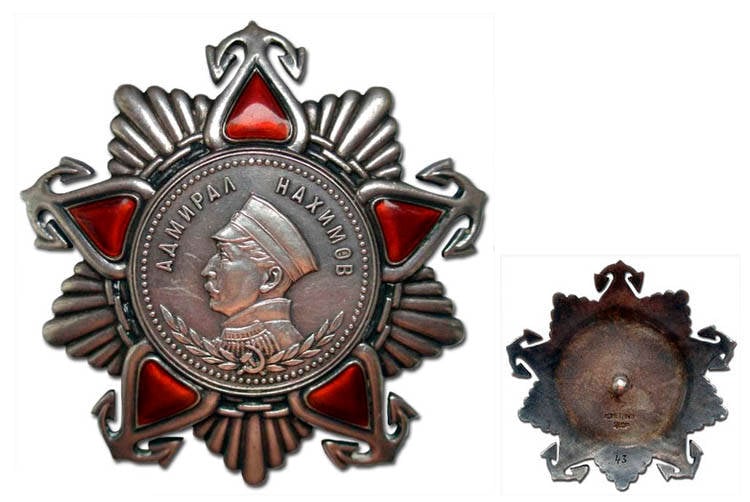 There is one very interesting historical detail that is associated with the order. The first awards were made to them by order of the fleet commander, and not on the basis of the Decree of the Presidium of the USSR Supreme Soviet. For this reason, in the history of awarding the Order of Nakhimov there are many incidents. So the first knight of the Order of Nakhimov I degree 16 of May 1944 was Lieutenant-General P.A. Morgunov, who is the head of the coastal defense of the Black Sea Fleet. He was awarded for assistance in the liberation of Sevastopol. However, the order for the number XXUMX was awarded to Rear Admiral N. E. Feldman, who is the commander of the brigade of the navy ships from the Baltic Fleet. The order was awarded to him on 1 on May 24. The same situation was repeated with the Order of Nakhimov II degree. The first cavalier of this order was Junior Lieutenant N. I. Vasin, the attack pilot of the 1945 attack assault regiment from the Northern Fleet. Vasin was presented to the Order of Nakhimov II degree 46 April 5, but the pilot was unable to receive his award, as he died during the combat departure of 1944 on May 16. As a result, the Order of Nakhimov II degree for the number 1944 1 in July 12 was received by the captain of the 1944 rank G. GN Slizky. 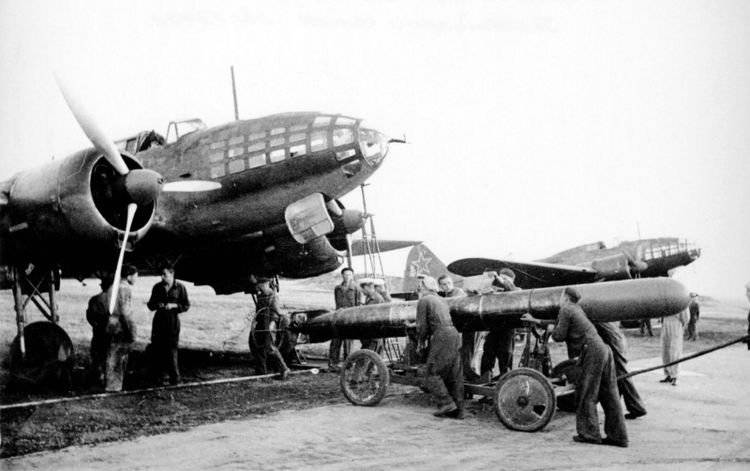 The Nakhimov Order of both degrees was awarded not only to officers of the Soviet Navy, but also to various formations and units of the Navy. Among the awarded parts there is the 51st mine torpedo aviation Tallinn Red Banner Regiment, which was simultaneously awarded both naval orders - Nakhimov and Ushakov.

In total, during the years of the Great Patriotic War, 82 was awarded with the I Degree Order of Nakhimov, including the 4-e combat units and formations of the Soviet fleet. The Order of Nakhimov II degree was made 489 awards, this honor was awarded to two parts of the Soviet Navy. These figures indicate that the Order of Nakhimov is one of the rarest Soviet awards. Today in private collections are single copies of this award. A significant number of these orders are either kept in museum collections or outside the countries of the former Soviet Union, mainly with collectors from Western Europe and the USA.

After the collapse of the USSR, the Order of Nakhimov, along with a number of other Soviet orders and medals, was retained in the award system of the Russian Federation, however, as a Russian award, up to 2010, did not have an official description and statute. To date, only one award has been given in Russia with this order. 28 July 2012 of the Year, the Order of Nakhimov was awarded the Russian nuclear-powered heavy cruiser Peter the Great.