Military orders and medals of the Soviet Union. Order of Ushakov

February 6 2014
4
3 March 1944 in the USSR were established two naval orders: the Order of Ushakov and Nakhimov. In this case, the highest award was considered the Order of Ushakov, which was formally equal to the commander's order of Suvorov. The Order was established in two degrees, the oldest of which was the first degree. Prior to this, naval officers had almost never been awarded with “land” military orders. Therefore, there was an urgent need to prepare and approve special awards for the officers of the Navy. In addition to these two orders, on the same day two “sea” medals were approved, which received the names of the same Russian admirals.


It is curious to note the fact that when working on the statutes of the orders of Ushakov and Nakhimov, their drafters had a debate about which award should be considered the main one in the unspoken "table of ranks". The whole point was that Soviet historians, and even Russian ones, rarely mentioned Fyodor Ushakov, while much more works were written about Nakhimov who lived not so long ago, and besides, he was very well known to ordinary people, as one of the heroes Crimean war. Despite this, the commander of the Soviet fleet Admiral Kuznetsov insisted that the order of Ushakov be recognized as the "main" one. It was enough to note only the fact that during his naval career Ushakov did not suffer a single defeat.

Especially Kuznetsov emphasized the importance of the victory of the Russian fleet over the Turkish, which was won near Cape Kaliakria in the summer of 1791. This Victoria has secured the prestige of the maritime state for Russia and has affirmed Russian interests in the Mediterranean and Black Seas. It was under Ushakov that a very strong fleet was built in our country, reliable fortresses in the Dniester, Bug and Dnepr limans, as well as in the Crimea. As a result, the Soviet commander-in-chief managed to convince the members of the T-bills committee of the State Defense Committee that it is more expedient to put the Order of Ushakov in first place in order of seniority. To familiarize commanders, fighters, civilians with the exploits of Admiral Fyodor Ushakov, special leaflets were released, and after the war ended, a feature film about the famous admiral was released on the country's screens. 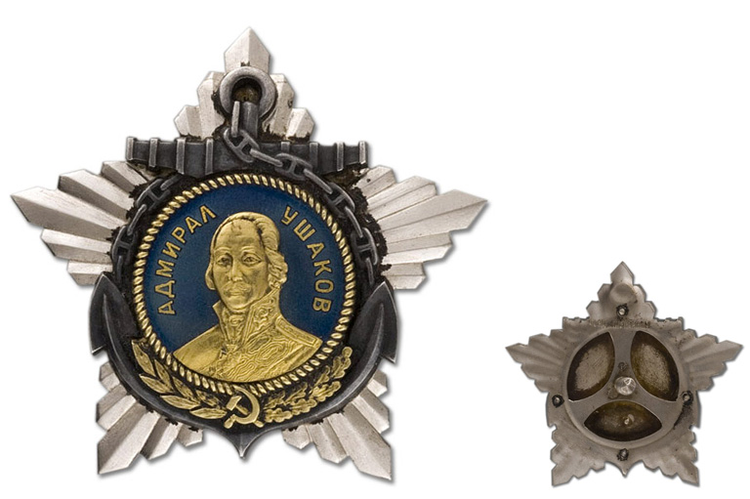 Order of Ushakov I degree
According to the statute of the award, the Order of Ushakov I degree was awarded to officers of the Soviet fleet who could not only plan, but also successfully carry out an operation, the purpose of which was to destroy the enemy’s naval forces, its coastal fortifications and bases, for a military operation conducted on enemy communications, which led to the destruction of a large number of its equipment and ships; for a combat operation, in the framework of which the largest number of superior enemy forces were destroyed, with the least losses for their troops; for planning and implementing a successful landing operation.

According to the statute of the award, the Order of Ushakov of the II degree was awarded to naval officers who supervised and successfully acted during military operations, which resulted in the defeat of much larger than the enemy, for swift and bold raid actions on enemy communications, which caused great losses. in the camp of the enemy; for the destruction of valuable transports and ships of the enemy, which went to escort vessels escort; for planning and directing part of the fleet forces during a successful amphibious operation. It can be summarized: Order of the II degree was awarded for personal participation.

The Order of Ushakov of I degree was a convex platinum five-pointed star, the surface of which was made in the form of diverging rays. In the very middle of this star in the rim, which was made in the form of a cable, there was a circle of gold, which was topped with blue enamel. In the upper part of the circle there was an inscription “ADMIRAL USHAKOV” (all capital letters). In the center of the circle there was a polished bust relief image of Admiral Ushakov. The circle with the rim itself was superimposed on a black (oxidized) anchor, to the clip of which the same oxidized anchor chain was fastened, framing the circle. Immediately under the circle, on top of the horns of the anchor and anchor chain, oak and laurel branches, made of gold, were superimposed. At the junction of these branches there was an image of a sickle and hammer, also made of gold. The Order of Ushakov I degree was made of platinum, with a golden circle in its central part. In total, the order contained 25 g of platinum, 8,55 g of gold and 13,022 g of silver. The total mass of the award was 48,4 ± 2,0. 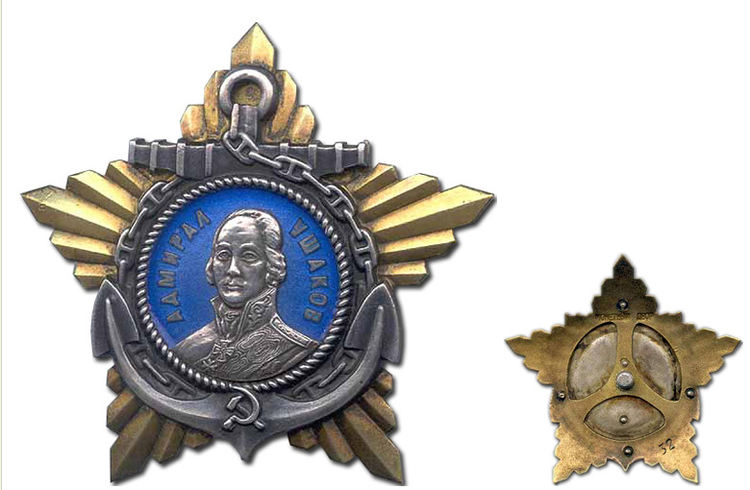 On the reverse side of the awards were a nut and a pin, which were intended for attaching the award to military uniform. A silk moire ribbon with a width of 24 mm was relied on the order. For the Order of the I degree, in the middle of the ribbon was a 5-mm blue strip, closer to the edges were two white stripes (width of each 8 mm), along the edges of the tape there were two stripes of blue color (width of each 1,5 mm). For the Order of the II degree in the middle there was a 11-mm white strip, two blue stripes were located closer to the edges (width of each 5 mm), small stripes of white color went along the edges of the tape (width of each 1,5 mm).

The first award of the new order took place on May 16, 1944. On this day, the Order of Ushakov of the XNUMXst degree was awarded to Lieutenant General V.V. Ermachenkov Commander aviation Black Sea Fleet and Rear Admiral P.I. Boltunov, commander of the submarine brigade of the Black Sea Fleet, both of them were awarded for successful and effective actions to liberate the Crimean Peninsula. Vice Admiral V.F. Tributs, commander of the Red Banner Baltic Fleet, was awarded the Order of Ushakov I degree, number 1, and was awarded on July 22, 1944. It is worth noting that the Order of Ushakov of the 4st degree was also awarded to one foreign citizen - the British Admiral Sir Bertram Home Ramsay, who is the commander of the naval forces of the allied forces in Europe, the award went to him on October 1944, 9. A number of units of the Soviet fleet were presented to the Ushakov Order of the 10st degree, in particular the 1944th assault Ropshinsky Red Banner Aviation Division of the Baltic Fleet and the Red Banner Submarine Brigade of the Northern Fleet. The first awards of the Order of Ushakov of the II degree took place on April 1, 2, the officers of the Northern Fleet received awards: captain 14st rank I. A. Kolyshkin, commander of a submarine brigade, captain XNUMXnd rank V. F. Kotov and others, only XNUMX people . 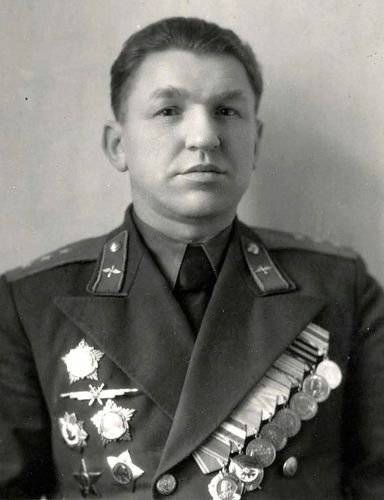 Colonel-General Aviation Yermachenkov VV (1906-1963). Cavalier of two Orders of Ushakov I degree
The last award of the Order of Ushakov took place in 1968 year. This year, the first degree of the order was marked by the Naval Academy, which today bears the name of Admiral of the Fleet of the Soviet Union N. G. Kuznetsov.