Military orders and medals of the Soviet Union. Order of the Patriotic War

January 14 2014
6
During World War II - from 1941 to 1945 - significant changes occurred in the USSR award system. A large number of new military orders and medals were established, which were necessary to commemorate the heroism and courage of Soviet soldiers and officers, as well as civilians who actively participated in the struggle against the German fascist invaders. Another reason for the mass appearance of new awards was the vague statutes of pre-war orders and medals. They were not clearly spelled out what exactly the medal or order should have been awarded; the presentation of the award largely depended on the assessment of the unit commander. For new awards, combat situations were clearly prescribed in the statute for which an award could be presented.


10 April 1942, Joseph Stalin ordered Colonel General A. V. Khrulev, who served as the head of the rear services for the Red Army, to order the development of a new military order. Initially, the award was to be called “For Military Valor,” but then the name was changed. Already on April 10, the artist A.I. Kuznetsov, who was a recognized expert in creating various military insignia, was given the task of developing a sketch for a future award. The new order was supposed to reflect the idea of ​​a nationwide struggle against the invaders. As materials for the new award was planned to use gold, silver and copper.

A similar task was given to another Soviet artist S.S. Dmitriev, who was one of the authors of the Order of Lenin, the medals "For Courage", "For Military Merit" and "XX Years of the Red Army". In just two days, both artists sketched out an order of 30 sketches of a future award. A. V. Khrulev presented all the prepared sketches to Stalin, who selected two works by A. Kuznetsov and S. Dmitriev, but in the end still accepted the sketch by A. Kuznetsov, making minor changes to the appearance of the award. It was decided to give the name “Patriotic War” to the new Soviet order. First time in stories The award system of the USSR had to have two degrees: 1 and 2. 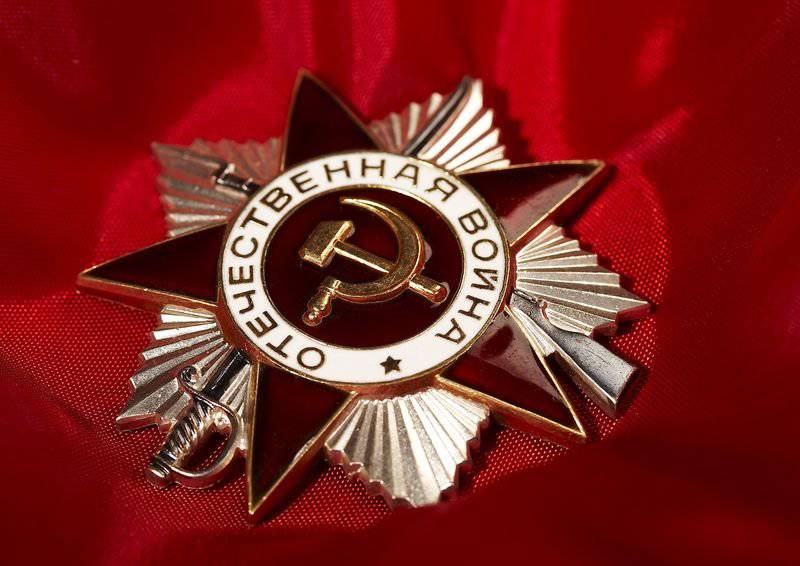 The Order of the Patriotic War was the first award that appeared during the Second World War, as well as the first order in the USSR, which had a division into degrees. In addition, for 35 years, this order was the only military award that was given to the family as a memory after the death of the person awarded with it (all other Soviet orders needed to be returned to the state). Only in 1977, the order of leaving orders and medals in the family was revised, and they were allowed to leave as a relic. 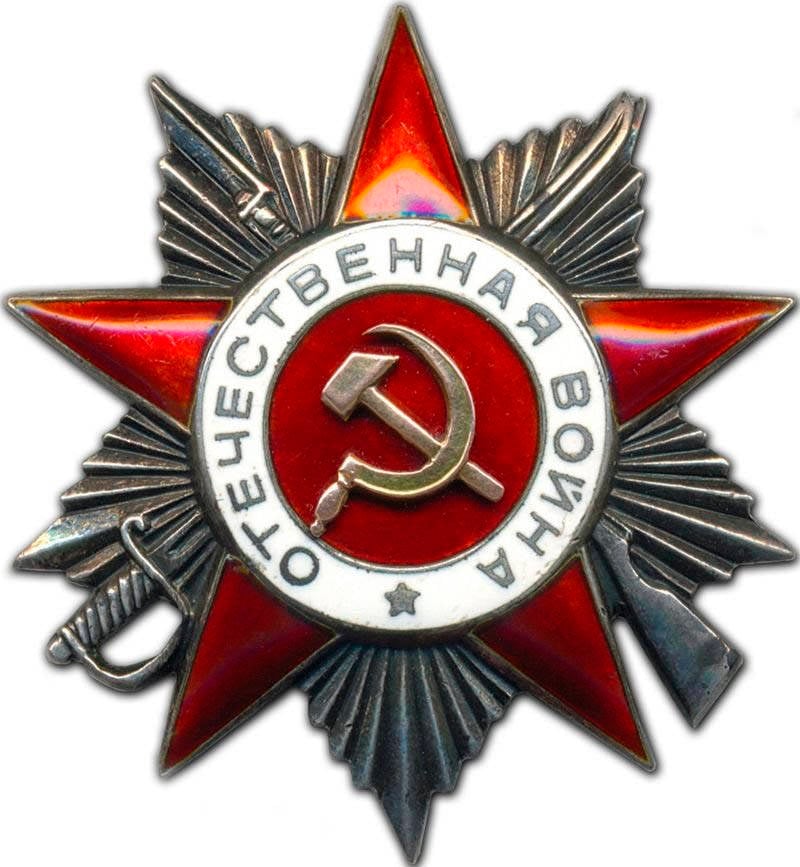 The first cavaliers of the new military award were Soviet artillerymen. By decree of the Presidium of the Armed Forces of the USSR from 02.06.1942 of the year to the Order of the Patriotic War I degree were presented Captain I. I. Krikliy, I.K. Junior Political Officer, A.K. commanded by Captain Krikliy, for 1942 of the day of fighting in the Kharkiv region, managed to destroy the enemy’s 2 tank. Senior Sergeant Smirnov A.V., after all the other numbers for his calculation had died, he continued firing from the gun. He continued to fight even after a fragment of a projectile exploded nearby tore off his hand. Overcoming physical pain, Smirnov continued to shoot, using only one hand. In this battle, he managed to destroy 32 German tanks. The commissar of the division, junior political commander Statsenko IK, during the battle, not only supervised subordinates, but also inspiring the soldiers by personal example, he himself managed to destroy several German tanks. The commander of the artillery battalion, captain Krikliy personally knocked out German tanks 6, but in the battle was seriously wounded and later died in the hospital.

In total, during the years of the Great Patriotic War, about 350 thousands of awards were made with the Order of the Patriotic War of I degree and about 926 thousands - II degrees. At the same time, it is worth noting that this order began to be issued only in 1942 year. At that time Leningrad was under German blockade, and most of the workers of the mint worked in the evacuation. So even the order had to be produced in difficult conditions of wartime. 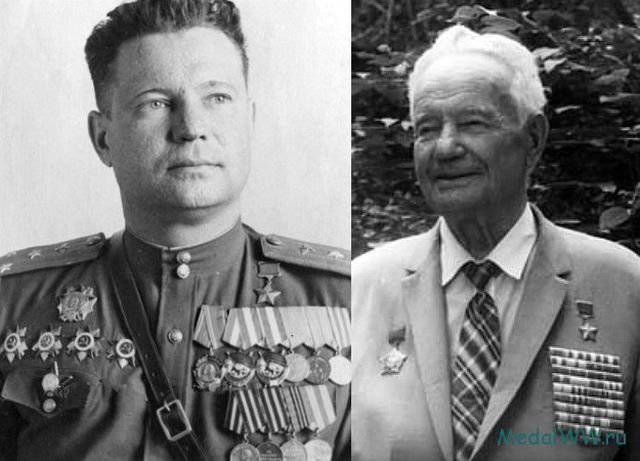 Hero of the Soviet Union I.Ye. Fedorov (1914-2011) Knight of the Five Orders of the Patriotic War
In Soviet history, there are cases of awards when the Order of the Patriotic War received whole military units, units, defense enterprises, military schools and even entire cities. In addition, a large number of foreigners were presented for the award. This order was mainly awarded to soldiers and officers of the Czechoslovak Corps, the Polish Army, as well as French pilots from the Normandie-Neman fighter air regiment, and it was received by British sailors participating in the famous polar convoys. One American was among those awarded with the Order of the Patriotic War, Averell Harriman, who served as US Ambassador to Moscow from 1943 to 1946.

The greatest number of awards for such an honorary award during the war years and for postwar differences was noted by Fedorov Ivan Evgrafovich - at once 5 orders (4 of World War I degree and 1 Order of Patriotic War II degree). In addition, in 1948, Fedorov became the Hero of the Soviet Union. Ivan Evgrafov graduated from the Great Patriotic War with the rank of colonel, he served as commander of the 273-th Gomel Fighter Division (he fought on the Leningrad front). After the end of the war, Fedorov I. Ye. Worked for some time as a test pilot in the well-known OKB Lavochkin. 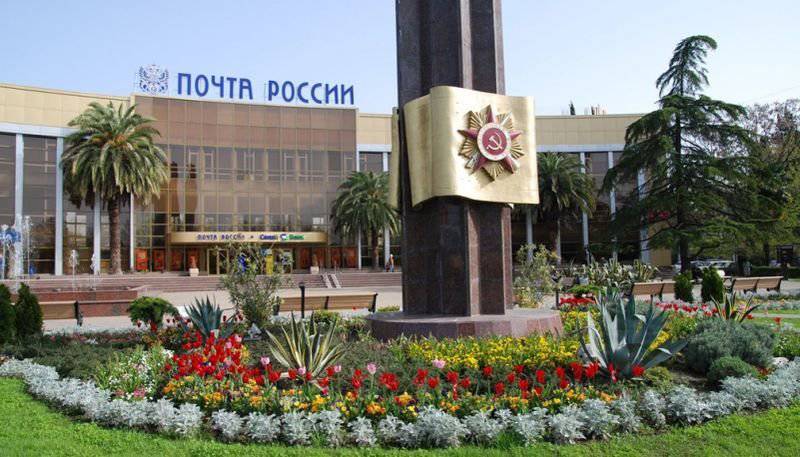 Ctrl Enter
Noticed oshЫbku Highlight text and press. Ctrl + Enter
We are
Diplomats of the People's Commissariat of Defense: on the eve and during the warMilitary orders and medals of the Soviet Union. Medals of the series "For Defense"
Military Reviewin Yandex News
Military Reviewin Google News
6 comments
Information
Dear reader, to leave comments on the publication, you must sign in.