Military orders and medals of the Soviet Union. Medals win

March 5 2014
4
Victory in the Great Patriotic War demanded the release of a special medal, which was the medal "For the Victory over Germany." The medal appeared 9 May 1945, on Victory Day, its full name was "For the victory over Germany in the Great Patriotic War 1941-1945.". However, the war did not end there, while remaining faithful to the agreements reached with the allies, the Soviet Union 9 August 1945 of the year began a war with Japan. Already 2 September 1945, Japan has signed an agreement on unconditional surrender. September 30 in the USSR was established another combat medal - "For the victory over Japan."


Medal "For the victory over Germany"

The medal "For the Victory over Germany" became the most common award of the USSR. This was due to the fact that Soviet citizens both at the front and in the rear took a massive part in the struggle against Hitler's conquerors and the defense of their homeland. Discussion on the preparation of a medal to mark the approaching end of the war began in October 1944, when the victory over Nazi Germany was only a matter of time. More closely, the options for the new award began to be discussed already in 1945 year. At least 20 different sketches were prepared, some of which were quite interesting solutions. For example, it was proposed to establish separate medals for veterans who won the 3-4 of the year, marking the numbers on the award itself.

Work on the development of sketches for the future medal began on 5 in May on 1945, after General of the Army Red Army Khrulyov, the head of the rear of the Red Army, gave the relevant task to the Technical Committee of the main quartermaster department. Soviet artists Barkhin G. B, Ganor I. A, Romanov E. M, Andrianov IK took part in the development of sketches for the future medal. As a result, the last two artists became the sponsors of the approved project of the medal “For the Victory over Germany”. The project of artists Andrianov and Romanov assumed the image on the obverse of the medal of the profile of I. V. Stalin, as well as the phrase “Our cause is just - we won”. It was also planned to transfer the medals to the award block from the Order of Glory, made in orange-black colors. 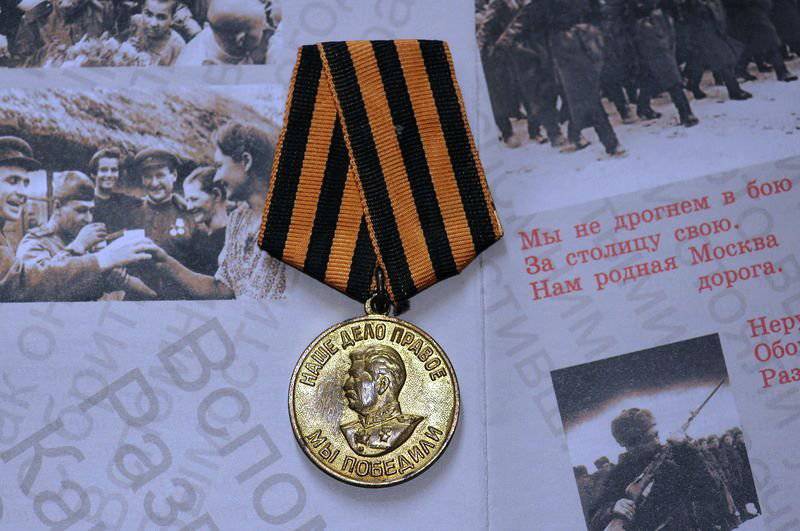 In this form, the award was approved on the basis of the Decree of the Presidium of the USSR Supreme Council on 9 May 1945. This medal could be obtained by all military personnel who took part in combat operations at the front, and also did not take part in military operations, but served for a certain time in the system of the People's Commissariat of Defense. Also, the medal was awarded to personnel of the rear evacuation hospitals of the Red Army and Navy, as well as collective farmers, employees, workers who took an active part in the fight against the invaders behind enemy lines and as part of partisan detachments.

The first medals produced came from the Mint 15 June 1945. They were handed over to Soviet commanders of the highest rank. So the first medals could get marshals Tolbukhin and Rokossovsky, army generals Purkaev and Antonov, colonel-general Berzarin, Gusev and Zakharov.

5 February 1951 of the year was determined by the Decree of the Presidium of the USSR Supreme Soviet that the medal "For the victory over Germany in the Great Patriotic War 1941-1945", as well as the certificate to it after the death of the owner of the award will remain in the family of the deceased as a memory. Prior to the appearance of this Decree, both the medal and the certificate of its delivery after the death of the awarded veteran of the Great Patriotic War were to be returned to the state.

The medal "For the Victory over Germany" was a regular circle with a diameter of 32 mm, it was made of brass. On the obverse of the award was a bosom image of Stalin, who was dressed in a marshal's uniform, the image of Stalin was turned to the left. In the upper part of the award there was an inscription “Our cause is right” on the circumference, in the lower part there was also an inscription “We won” (all the letters in the inscriptions were in capital letters). The inscription “For the victory over Germany in the Great Patriotic War 1941-1945” was placed on the reverse side of the award (all capital letters), a small star was placed at the bottom of the medal. All inscriptions on the medals were made convex. 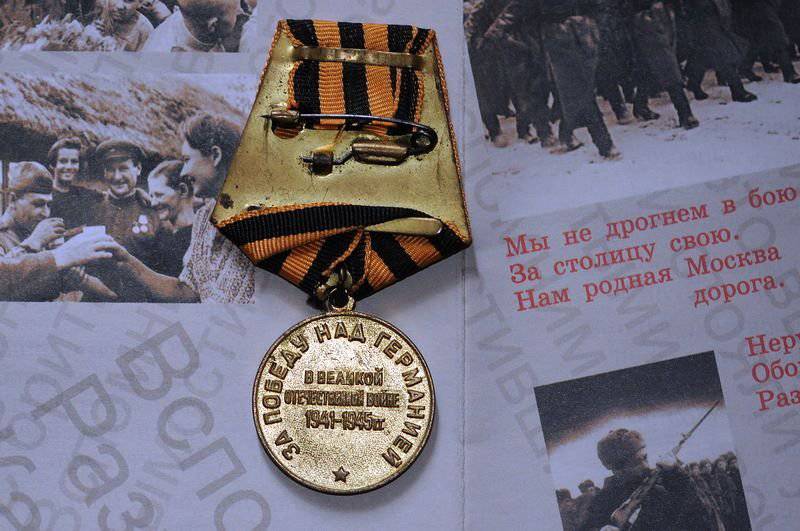 With the help of a ring and an ear, the medal “For the Victory over Germany” was connected to a standard pentagonal shoe block, which was covered with silk ribbon (width 24 mm). On this tape 5 was located equal to the width of the longitudinal strips: 2 orange and 3 black. The edges of the ribbon were edged with small stripes of orange.

Immediately after the end of World War II, this award was awarded to approximately 13 666 000 soldiers and officers. At the same time a significant number of medals were awarded after the war. According to the available statistical information on 1 January 1995, about 14 933 000 people were awarded with the medal “For the Victory over Germany”.

Medal "For victory over Japan"

After defeating Nazi Germany, the USSR, fulfilling the commitments undertaken during the Crimean Allied Conference, declared war on Japan on August 8, 1945, and on August 9 began to launch large-scale military operations. For 3 months, Soviet military units were transferred to the Far East and on the night of August 9 on a wide front, the length of which reached 4 thousand kilometers, went on the offensive on Japanese positions. The Soviet units needed to break up the largest land group of the Japanese army, the so-called Kwantung Army, which consisted of 49 divisions and 27 brigades (about 1 million people), 6260 guns and mortars, 1500 aircraft and 1150 tanks. At the same time, Soviet troops in the Far East, led by Marshal A.M. Vasilevsky, were able to quickly concentrate 1,5 million soldiers, more than 26 thousand guns and mortars, more than 5500 tanks and self-propelled guns, as well as more than 3800 aircraft . 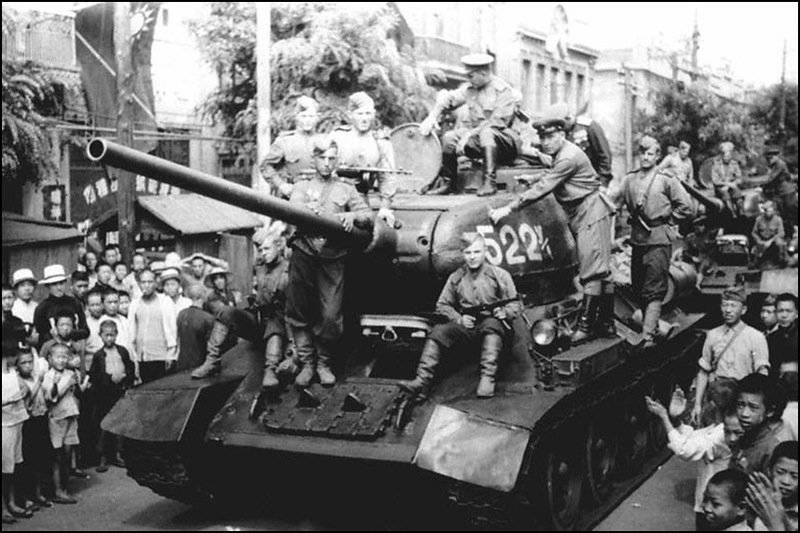 All Soviet forces were divided between the three created fronts - the 1st and 2nd Far Eastern and Transbaikal. Direct support to the advancing troops was provided by the Amur Military flotilla and the Pacific Fleet. Very quickly, the entire Kwantung army was defeated, which significantly accelerated the surrender of the land of the rising sun, which was signed on September 2, 1945. In total, the hostilities between the USSR and Japan in the Far East lasted 24 days. However, this operation in its scale and most importantly, in its results, has become one of the largest and most successful in the entire Second World War. In the framework of this operation, Korea and Northeast China were liberated, while the Soviet Union returned the Kuril Islands and South Sakhalin to their control.

All private traders of the military campaign in the Far East got the right to wear the medal "For the Victory over Japan" in 1945. This award was approved by the Decree of the Presidium of the USSR Supreme Soviet on 30 September 1945. In addition to the direct participants in the hostilities with the Japanese army, a medal was also awarded to military personnel who served in the central directorates of the Red Army and took part in supporting the combat operations of the Soviet troops. The author of the sketch of the medal was the artist M. L. Lukina. In total, more than 1 800 000 soldiers and officers were awarded the medal "For the Victory over Japan".

The medal was made in the form of a circle with a diameter of 32 mm and was made of brass. On the obverse of the award was a biblical image of J. V. Stalin in marshal's uniform. The image was made in profile and turned to the right. On the circumference of the medal there was an inscription: “For the victory over Japan” (all capital letters). On the back of the award in the upper part was a small star, and under it was the inscription: "3 September 1945". All inscriptions on the medals were made convex. 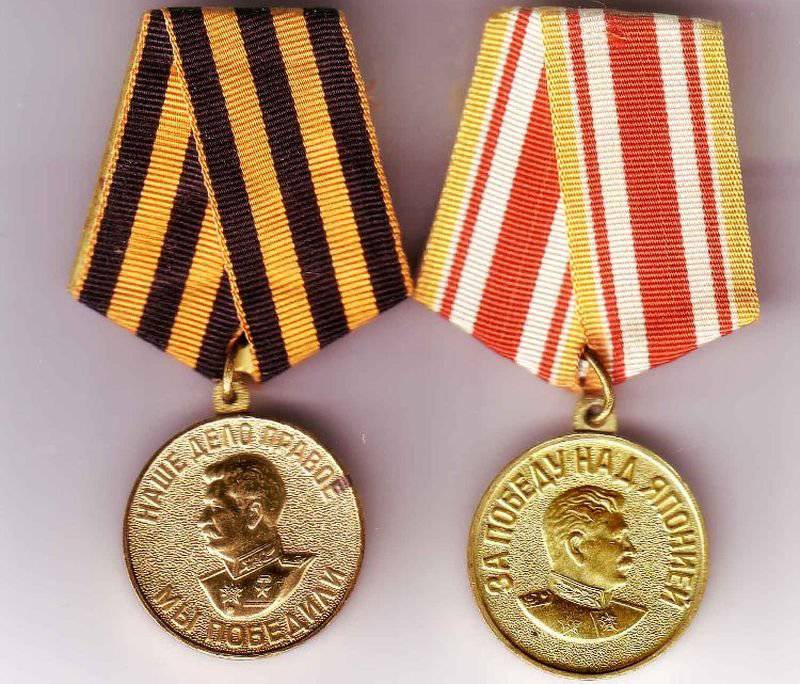 With the help of a ring and an ear, the medal was attached to a standard pentagonal block, which was covered with silk ribbon (width 24 mm). In the middle of the ribbon was the widest strip of red, on either side of it was located along one white strip, along one red strip and a narrow white strip. The edges of the ribbon were edged with narrow strips of yellow.

Ctrl Enter
Noticed oshЫbku Highlight text and press. Ctrl + Enter
We are
Diplomats of the People's Commissariat of Defense: on the eve and during the warMilitary orders and medals of the Soviet Union. Medals of the series "For Defense"
Military Reviewin Yandex News
Military Reviewin Google News
4 comments
Information
Dear reader, to leave comments on the publication, you must sign in.