Military orders and medals of the Soviet Union. Order of Kutuzov

January 17 2014
5
Order of Kutuzov - the only Order of the USSR, different degrees of which were approved at different times. Order of Kutuzov - the second highest order after the Order of Suvorov. The Order was named in honor of the great Russian commander, one of the heroes of the Patriotic War 1812 of the year, Field Marshal Mikhail Illarionovich Kutuzov. The first and second degrees of this award were established by a special Decree of the Presidium of the USSR Supreme Council on July 29 of 1942. However, after several successful winter operations for the Soviet troops (1942 / 1943), it became necessary to expand the circle of commanders who were awarded. Therefore, the Decree of February 8 1943 in the USSR established the Order of Kutuzov III degree, which brought this award in line with the previously established Order of Suvorov (3 degree) for posts awarded to commanders of the Red Army.


It is curious to note that, unlike the Order of Suvorov, the Order of Kutuzov had a more “headquarters”, “defensive” character, which was reflected in its statute. Also interesting is the fact that the order was established by 29 decree of July 1942 of the year during the battle of Stalingrad, the day after one of the most famous wartime orders of Stalin, Order No. 227 “Not one step back!”.

At the very beginning of summer 1942, the Soviet government decided to develop new combat decorations, which were intended to award only the commanders of the Red Army. Among these awards was the Order of Kutuzov. Work on the creation of a sketch of the new order was entrusted to the technical committee of the Main Directorate Directorate of the Red Army. A whole group of artists was involved in the work on the draft of the sketch, including Moskalev N. I., Dmitriev S. I., Telyatnikov I. S., Kuznetsov A. I., as well as three architects: Rudnev P. V., Skokan P. I. and Zholtovsky I. V. Having reviewed the projects submitted by them, the selection committee approved the sketch, which was created by the artist N. I. Moskalev. 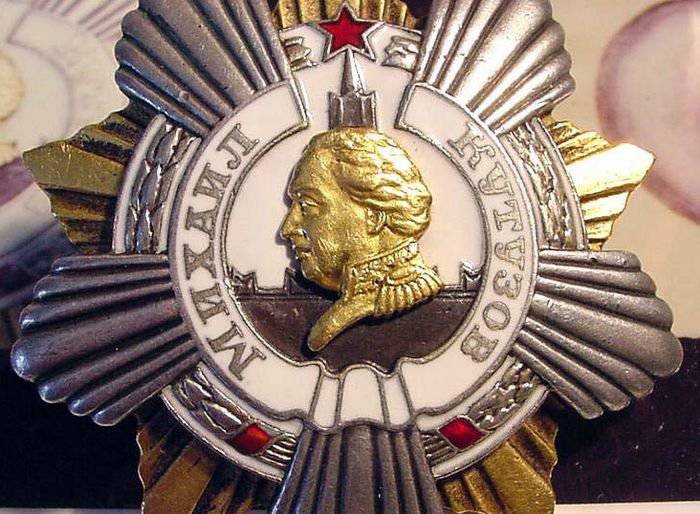 The creator of the sketch of the Order of Kutuzov, artist N. I. Moskalev, was the author of many Soviet orders and medals of the Great Patriotic War. He began his activity while still a Red Army volunteer. Moskalev joined the Red Army in 1918, and eventually connected his whole life with it. According to the sketches of Moskalev, such Soviet orders as the Order of Bogdan Khmelnitsky (in collaboration with the schedule of A. S. Pashchenko) and the Order of Glory were created.

The Order of Kutuzov I degree was made of gold, it was an image of a five-pointed convex star, the surface of which was made in the form of diverging rays. In the middle of the star there was a circle, which was covered with white enamel, on its perimeter there was a laurel-oak wreath of gold, which was intertwined with ribbon, covered with red enamel. In the center of this circle was a golden image of Kutuzov, it was made in relief. Kutuzov was depicted against the background of the silver tower of the Kremlin, which was surmounted by a five-pointed star, covered with ruby-red enamel. The inscription “Mikhail Kutuzov” was made around the image of the field marshal on a white enamel tape. The inscription and ribbons of the ribbon were gold. The gaps between the ends of the five-pointed golden star were covered with five beams of silver rays that went out from under the white enamel ribbon. These rays were made of silver. In the order of Kutuzov I degree was 19,976 ± 0,76 g of gold, 18,952 ± 0,734 g of silver, the total weight of the order was 42,0 ± 1,8 g. 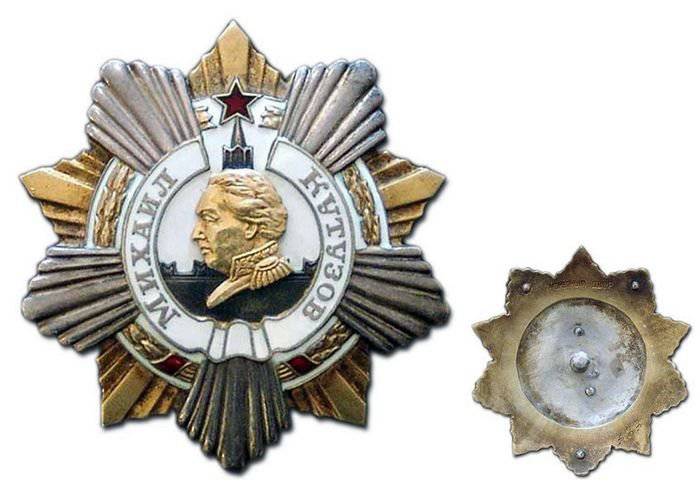 Order of Kutuzov I degree

The Order of Kutuzov, Grade III, did not have white enamel in the center circle, as well as on an asterisk that crowns the Kremlin tower. The image of Field Marshal Kutuzov, the tape that encircles the circle, and the inscription on the tape were oxidized. Order of the III degree contained 24,189 ± 1,369 g of silver, the total weight of the award was 26,2 ± 1,5 g.

The sizes of orders were different. The orders of Kutuzov of I and II degrees were between the end of the five-pointed star and the opposite end of the beam of 50 mm, on the order of the III degree this distance was equal to 44 mm. On the back side of the award badge, a nut with a pin was attached to fasten the order to the uniform and other clothes. A special dark-blue silk moire ribbon (width 24 mm) relied on the order; there were orange longitudinal stripes on the ribbon. For the I degree - one strip in the middle (mm 5); for the II degree - two strips located at the edges of the tape (3 mm each); for the III degree - three strips: one located in the middle and two along the edges of the tape (2 mm each).

The Order of Kutuzov, I degree, was intended to be handed over to commanders of fronts, armies, and their deputies for well-designed, prepared and carried out combat operations, during which the troops were able to completely or partially destroy the superior forces of the enemy with the achievement of the best possible security of the entrusted units. 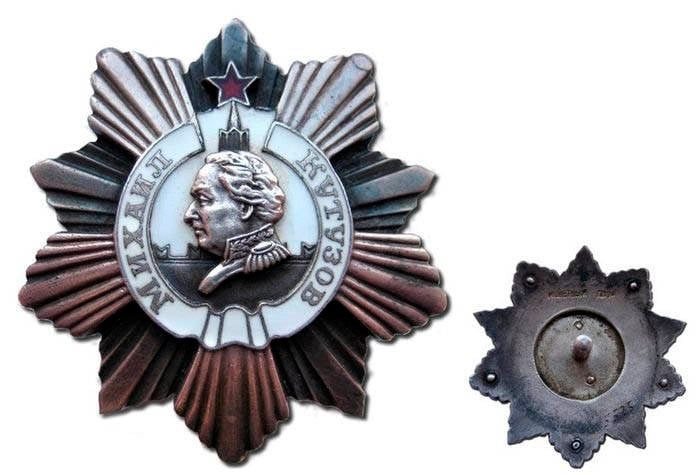 Order of Kutuzov II degree was intended for delivery to the commanders of corps, divisions, brigades, as well as the chiefs of staff for a well-designed and conducted operation to counter enemy troops on the defensive sector of the front, which was accompanied by causing the enemy to cause significant losses, as a result of which the enemy was forced to retreat.

Order of Kutuzov III degree was intended for delivery to the commanders of regiments, battalions, companies, as well as the chiefs of staff of the regiments for a competently drawn up battle plan, preparing, organizing and conducting combat operations as part of the combat missions assigned to the unit: retaining their own and seizing enemy combat positions; blocking large groups of enemy troops; elimination of a blocked enemy. An indispensable condition for receiving this award was the maximum possible preservation of its military equipment and personnel in combat-ready condition.

The first awards of the I degree Order of Kutuzov were held in January 1943. In particular, the orders of the I degree were awarded to the highest Soviet military leaders - Tyulenev I. V (Army General), Zakharov G. F (Lieutenant General), Fedyuninsky I. I. (Major General) and others. In total, 17 was presented for the award major military leaders of the Red Army, most of them were awarded for the successful conduct of military operations in the area of ​​Stalingrad. 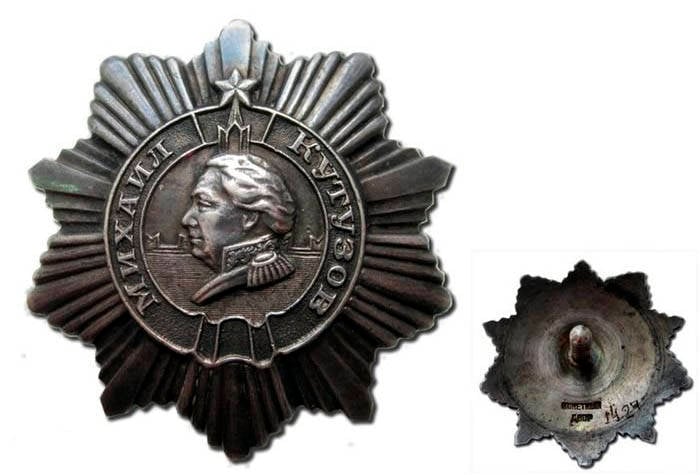 Order of Kutuzov III degree
Order of Kutuzov II degree under the number 1 was presented to A.I. Rodimtsev (Major General), who commanded the 13 Guards Rifle Division. Also among the first cavaliers of this order was the commander of the 58 th army, which fought on the Caucasian front, Melnik Semen Kondratievich (Major General). As a result of long successful defensive battles, the 58 army was able to wear out the Nazis and eventually launched a counteroffensive, breaking through the German line of defense.

The first officers who received the Order of Kutuzov of the III degree were Gubin N. P. (Major) and Parfenov M. T. (Colonel).

The Order of Kutuzov was retained in the system of state awards of the Russian Federation, but as an award to Russia he did not have an official statute and official description until the 2010 year. The appearance of the order was substantially modified.

Ctrl Enter
Noticed oshЫbku Highlight text and press. Ctrl + Enter
We are
Congratulations on the 285 anniversary of the birth of the Great Russian commander Alexander Vasilyevich Suvorov!Military orders and medals of the Soviet Union. Medals of the series "For Defense"
Military Reviewin Yandex News
Military Reviewin Google News
5 comments
Information
Dear reader, to leave comments on the publication, you must sign in.