Military orders and medals of the Soviet Union. Ushakov's Medal

February 7 2014
3
The orders of Ushakov and Nakhimov were supplemented with medals of the same name, which were intended to reward the junior ranks of the Soviet Navy. The eldest was Ushakov’s medal, which was established by a decree of the Presidium of the USSR Armed Forces of March 3, 1944, simultaneously with the above-mentioned orders. The initiator of the establishment of new military awards, which could be awarded to officers and sailors of the Soviet fleet, was Commissar of the Navy of the USSR Admiral N.G. Kuznetsov.


The final decision on the introduction of a new medal was made by members of a special commission, which was headed by the head of the RKKA GPU A.S. Shcherbakov. The project of the Ushakov medal belonged to a group of artists headed by the head of the organizational and mobilization department of the People's Commissariat of the Soviet Fleet, Captain 1st Rank BM Khomich. The artist A.L.Diodorov is considered to be the author of the drawing of the medal. During the Great Patriotic War, the right to award the Ushakov medal was transferred from the Presidium of the USSR Armed Forces to the highest and senior command personnel of the fleet. The right to award the Ushakov medal belonged to the commanders of fleets and flotillas, the air force of the fleet, squadrons of ships, coastal defense areas, as well as commanders of ship brigades, commanders of artillery and aviation brigades, marine brigades and individual regiments. This provision on the right to award a medal existed until February 26, 1947.

The Ushakov Medal could be awarded to soldiers and sailors, sergeants and petty officers, warrant officers and warrant officers of the Navy, as well as naval units of the USSR border troops for personal courage and bravery that they displayed during the fighting. At the same time, isolated cases of awarding the Ushakov Medal to junior naval officers were known; usually, such awards were given at the request of sailor groups. 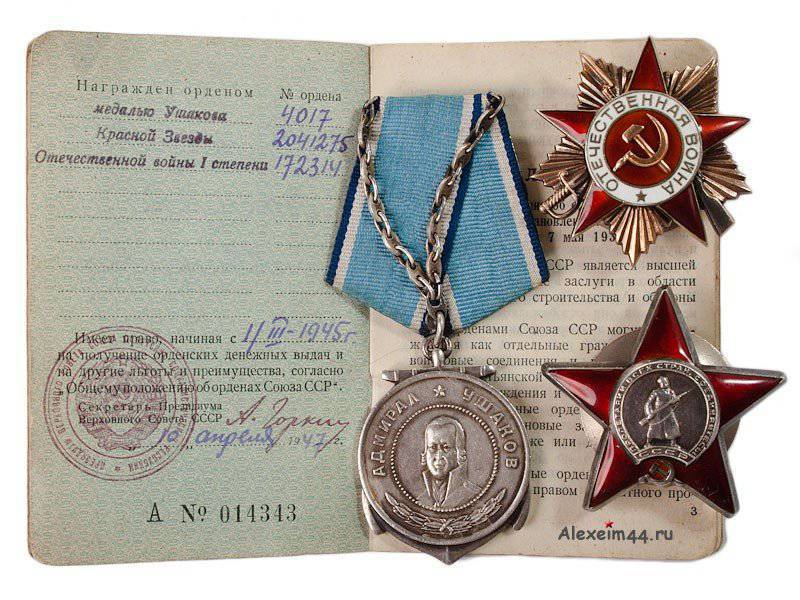 The Ushakov Medal was intended to reward the rank and file sergeant-foreman of the fleet and midshipmen for their bravery and courage: in battles with the enemies of the Soviet Union in maritime theaters of military operations; while protecting the state maritime border of the country; when performing combat missions by units and ships of the Navy and Border Troops; in the performance of military duty in conditions that were associated with a risk to the lives of military personnel.

The Ushakov Medal is a regular circle with a diameter of 36 mm, in the middle of the circle there is a bust image of Admiral Ushakov, it is made in relief. The circumference of the image is framed by convex points (their total number is 84). At the top along the circumference of the medal there is a convex inscription “ADMIRAL USHAKOV” (all capital letters), between the words of the inscription is a five-pointed star. At the bottom of the medal under the relief image of the admiral there are two laurel branches, which are connected with a cross ribbon. On the circumference of the front side of the award there is a bulging side. The circle of the medal was imposed on the anchor, which has a height of 48,5-49 mm (including the ring in its upper part). The medal was made of silver 925 samples. The content of silver in the medal - 31,747 g, the total mass of the award - 34,65 ± 1,0 g.

With the help of a ring and an ear, the medal was attached to a standard pentagonal block, which was covered with silk moire ribbon. On top of the pads was a silver anchor chain, which went from the upper corners of the pad and was attached to the ear of the medal. The tape had a blue color, white and blue stripes (thickness of white — 2 mm, blue — 1,5 mm) passed along its edges, and the total width of the tape — 24 mm.

The Ushakov Medal was an analogue of the well-known military medal "For Courage" and was intended for the rank-and-file and sergeant-foreman of the navy, as well as midshipmen. This award was worn on the left side of the chest and in the presence of other Soviet awards was located immediately after the medal "For Courage". The Ushakov Medal was different from all other USSR military awards, because a miniature anchor chain was placed over the front side of the medal pad, which was attached to the upper corners of the pad and to the ear of the medal. 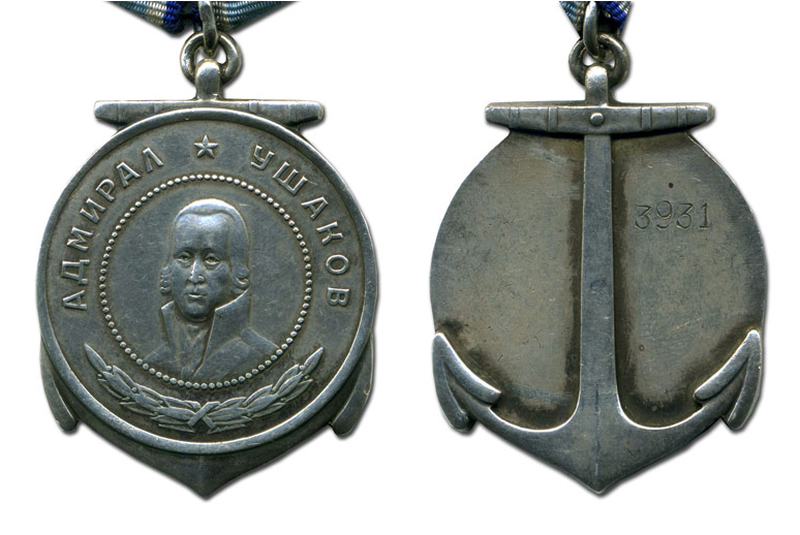 The first Ushakov medals were awarded as early as April 1944. The presentation of the first awards on the Black Sea Fleet took place on 20 on April 1944 of the year, the Warrant officers S. V. Gorokhov and V. P. Stepanenko, as well as the foreman of the 1 9th article V. I. Shevbunov received medals. In the Northern Fleet, the first medal was awarded to 26 on May 1944 of the year, and its foreman was the foreman of the 2-th article of N. V. Fadeev. At the Baltic Fleet, the first awards were awarded on 26 on June 1944 of the year, their owners were the senior sailor AK Afanasyev, the foremen of the 1-th article N. V. Belyaev and E. A. Bychinsky and others. 17 July The 1945 medal of the Ushakov was first presented to foreign sailors, and the medal was awarded to the 5 military personnel of the US Navy.

In Soviet stories There are cases when the Ushakov medal was re-awarded. For example, the holder of the Ushakov medal twice was D. Eremenko, foreman of the 2 article. In addition to him, Alexander Pavlovich Fedorenko, Vasily Borisov, Yevgeny Kutyshev, Pavel Kuzmich Kladiev were awarded two Ushakov medals. Also during the Great Patriotic War, many Soviet sailors were awarded two sea medals at once - Ushakov and Nakhimov. For example, the owner of two fleet medals was Hero of the Soviet Union, foreman of the 1-th article, G. M. Davydenko, who served in the Baltic Fleet, where he commanded the boat trawler from the 7-th battalion of minesweepers. Both fleet-medalists also had A.M. Portnov, who fought on the M-74 and M-102 submarines. Later, Portnov was part of the crew of the underwater mine layer L-3, who managed to sink the German Goya transport, carrying more than 6 thousands of Nazis.

During the Great Patriotic War, the Ushakov Medal was awarded more than 14 thousands of times. From 28 March 1980, a change was made to the statute of the medal that allowed the medal to be awarded both in wartime and in peacetime. Between 1980 and 1991, the year around 1000 was awarded. As of 1, January 1995, the Ushakov Medal was awarded 16080 times. It is worth noting that after the collapse of the USSR, the medal was retained in the award system of Russia. After being preserved in the award system of the Russian Federation, the appearance of the medal has not undergone major changes.

Ctrl Enter
Noticed oshЫbku Highlight text and press. Ctrl + Enter
We are
Military orders and medals of the Soviet Union. Order of NakhimovBorodino battle in the paintings of artists
Military Reviewin Yandex News
Military Reviewin Google News
3 comments
Information
Dear reader, to leave comments on the publication, you must sign in.