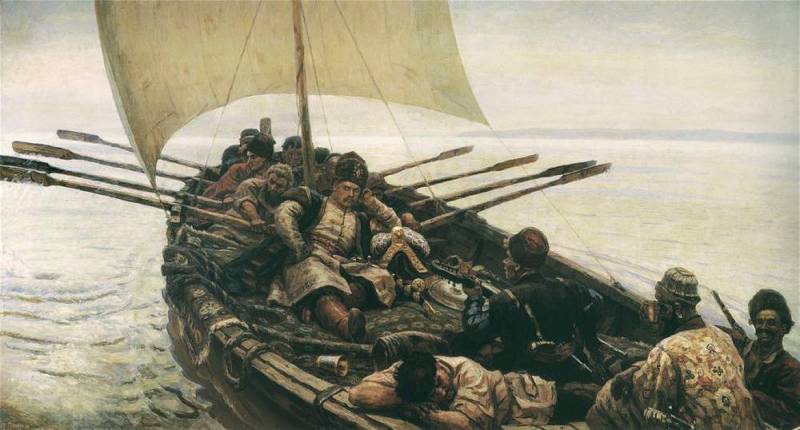 One of the main fronts of the Civil War was the confrontation of power and peasantry. The main part of the Russian people - the peasantry, spoke out against any government at all. The peasants have created their own project - the freemen of the people.


In the days of the Romanovs, there was a dangerous split - the power and the elite separated from the people. There was a westernization (westernization) of the social elite. Nobles appeared in Russia- “Europeans”, for whom the native language was German, French and English, but not Russian. For them, the ideal was Holland, France or England. They preferred to live not in Ryazan or Novgorod, but in Paris, Rome, Vienna or London. The overwhelming majority of the people (the peasants made up 90% of the population of Russia) were enslaved by landowners, the state, given to state-owned factories, etc. And the workers, the same former peasants, lived in terrible conditions, in full power of the capitalists.

As a result, several percent of the population gradually became social parasites, the colonizers of their own people. If the Western colonialists exploited alien peoples and tribes, the Russian nobles and capitalists - their own people. Social justice was destroyed. Earlier, in the Russian (Moscow) Kingdom, in conditions of constant war, a mobilization economy and social structure formed in Russia. The nobles were given land and peasants on the condition of lifelong service and the service of their children. The nobles used the labor of the peasants, but in return they paid with sweat and blood, served the state, defended their homeland. In Russia, the Romanovs were given the opportunity to be social parasites, to eat away the labor of the peasants and not give anything in return. Moreover, they were withdrawing capital received in Russia to the West. They spent money received from estates or enterprises on luxury goods produced in the West. They bought property in the West, lived for years in western cities.

Peasants (people) responded to such universal injustice with war. Already the 17th century became “rebellious” - two peasant wars (Distemper and Razin’s Uprising), not counting many uprisings, riots and riots. As well as the terrible split of the church and the people under Nikon and Tsar Alexei Mikhailovich "Tishayshim." The most passionary, strong part of the people - the Old Believers, went into schism and gradually created their own Russia. The opposition of the people and the authorities began. The people tried to throw off and destroy the alien power at any opportunity.

Under Peter the Great, the people were drained of blood during the cruel confrontation. There has been some lull. A new powerful explosion followed when the nobles were released from compulsory service and they were able to burn their lives, to be social parasites. After a powerful peasant war led by Pugachev under Catherine II, there was a long lull. But it did not mean that the people humbled or social justice was restored. Just the balance of power was in favor of power. The Russian Empire was at the peak of its military power. However, in many respects the development of Russia went past the life of the people and at the expense of the people. The Russian community during this time has not changed. However, the peasants did not forget about injustice. Nothing has changed and the abolition of serfdom. Moreover, the land issue was one of the root causes that destroyed the Russian empire.

A new opportunity to start a peasant war appeared during the incompetent reign of Nicholas II. The contradictory policies of the tsarist government, the defeat in the war with Japan, the 1905 Revolution - 1907, the Stolypin policy, led to a sharp increase in peasant uprisings. Landowner estates again flared. The Stolypin government was able to "tighten the screws," there was some lull. As it turned out, before the storm. Stolypin, Durnovo, Rasputin and other reasonable people, warned the king that a new big war, clashes with Germany, Russia would not survive. There will be a terrible social explosion. All the contradictions accumulated over the centuries will break out. To go to war with a fragmented society struck by mutual hatred is insane. The cadre army, which was the mainstay of the royal power, will be in battle. The throne will be defenseless. The “elite” infected by westernism will surely arrange a palace coup.

Indeed, world war, the clash of the Germans and the Russians in the interests of France, England and the United States, became the fuse that blew up the Russian empire. The confrontation of the people and the authorities again sharply escalated. The government threw people to fight for incomprehensible and alien to him goal. The Russian peasant did not care about the Polish lands in Germany and Austria-Hungary, Galicia, the Black Sea straits, and Turkish Armenia. He was worried about more pressing problems - where to get bread to feed the family, how to give children primary education, etc. For the peasants it was someone else's war. Indeed, in terms of national interests - it was a foreign war, a war in the interests of the owners of the West, who solved their problems at the expense of Russia. The war sharply aggravated the peasant and working life. Every year, the world massacre took away millions of the healthiest and strongest men from the peasant world, many of them would die, others would return cripples, sick people. The economy collapsed, millions of families lost their fathers, sons and brothers, and received nothing in return from the government. All the problems of the village were sharply aggravated - the industry stopped providing essential goods and tools to the village; the government introduced a food list; hands lacked and much more.

The war was also dangerous because from the very beginning all the beautiful plans of the “quick war” (they were built by everyone — the Germans, the French, and the Russians) quickly collapsed. It was necessary to wage a heavy, long and extremely bloody positional war. Mobilize the army millions of former peasants. Throw them to the front, accustomed to constant blood and violence. A huge mass of soldiers will rot in the trenches, feed the lice, hurt and die, cursing power. To rise in suicidal bayonet attacks, which will be organized by generals who do not know modern war. To fight in the conditions of shortage of rifles, guns, shells, equipment and provisions. To fight, not knowing what they are fighting? Meanwhile, representatives of the bourgeoisie, the nobility will burn their lives, eat and drink sweetly. And ordinary people see everything. The question is when the thicket of patience is overflowing.

Stolypin, Durnovo and Rasputin understood this. And Tsar Nicholas is not. He threw Russia to fight for the interests of the Western powers and paid a terrible price for this mistake, including the death of his own family. Therefore, one should not be surprised at the burst of wild, bestial anger, hatred in 1917 and throughout the entire Russian Troubles. She was accumulating for a very long time and reached its peak during the war. Therefore, after February, Russia will explode, it will be a disaster. Soldiers and sailors will tear to pieces their own commanders. Peasants burn property and refuse to obey the authorities. And this is still before October. The peasant war will break out even before the October Revolution. Peasants and soldiers' masses will oppose the government. A personification of alien, hateful, colonial power will be the landowners, the "bourgeois", "goldsmiths", the police and "anti-agents" (intelligentsia). After all, it is these representatives of the “old Russia” who will drive millions of people to the slaughter of world war.

Therefore, millions of people and went for the revolutionaries. For social revolutionaries, anarchists, popular socialists and the Bolsheviks. They offered land and peace. Thus, it was the war that finally rejected the people from power. It has completed this process to its logical end - the war of the peasants against any government. The people spoke out against the government as such.

After October, when the red and white descended in mortal combat, with the participation of the interventionists, nationalists and gangsters, the people did everything to destroy the state on the territory of Russian civilization. The peasantry came up with a special, unparalleled (up to the Hussite-Taborites) draft political structure. It was a utopia - a community of free bread-growers, who received the land in their property and on the basis of simple relations of mutually beneficial neighborhood processing it. In the conditions of the complete collapse of the state, in the conditions of war, the peasantry tried to bring all patriarchal utopia into practice against all.

It was the peasant project and the peasant war that became one of the main reasons for the defeat of the white governments and armies. Whites could offer nothing to the peasantry, except for the return of the power of the landlords and capitalists. The peasants responded with large-scale uprisings. White tried to suppress them with whips, ramrods and outright terror. During the war with the Reds, it was not possible to suppress the peasants' speeches. Russian communists had a project that was in the interests of the majority of the people. However, in order to humiliate the elemental people, it was necessary to use cruel measures. It was one of the worst pages of the Russian Troubles. The peasant world was washed with blood, having lost millions of lives, trying to bring its patriarchal project to life.

It is worth noting that if both white and red lost, and the peasants could realize their project in Russia. For example, in the European part of Russia, in the Urals and Siberia, when the margins fall off. That he was doomed to complete collapse and would have completely killed Russian civilization, in a confrontation with the West and the East. Peasant armies on carts with rifles and machine guns had no chance against the armies of industrial powers - England, France, the USA, Japan, Turkey, and even such young states as Poland and Finland. Heavy type artillery armies tanks, armored vehicles and aircraft would quickly crush peasant Russia. The only chance for the success of Russian civilization and the people was given only by the red project.

How to create a volunteer army
How the battle for the Don began
"Your talk is not needed by the working people. The guard is tired!"
100 years of the Workers 'and Peasants' Red Army and Navy
Who incited the Civil War
White fought for the interests of the West
Anti-Russian and anti-state white project
How "Ukrainian Chimera" incited the Civil War
How to create Ukraine and the "Ukrainian people"
How the red took Kiev
Victory of the Red Army on the Don
Bloody Battle of the Ice Campaign
How Kornilov stormed Ekaterinodar
Destined to die? Died with honor!