The Bolsheviks began to implement a new development project, saving not only Russia, but the whole of humanity 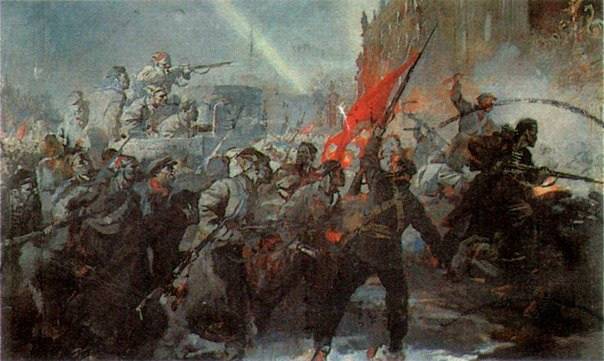 100 years ago, October 25 (November 7) 1917, the Bolshevik Party took power into its own hands. The Great October Socialist Revolution was the greatest event not only of the Russian, but also of the world stories. No wonder China remembers this - the Russian revolution became the basis for the liberation of the Middle Kingdom from colonial oppression, the Japanese occupation and the victory of the Chinese Communists. Following the path of Lenin and Stalin, the Chinese civilization achieved tremendous success, becoming a superpower.


The revolution in Russia eventually led to the collapse of the colonial system. Forced Western masters to move to more hidden methods of controlling Latin America, Africa and Asia - to create a neo-colonial system. Thanks to the Russian Revolution, India, black Africa, the Arab world, etc. gained freedom from the colonialists. The revolution in Russia and the creation of the Soviet project, the creation of a society of service and creation, social justice, forced the Western masters to sympathize with European Social-Democracy, to build general welfare "in Western Europe (a substitute for Soviet society). Make America "sign of capitalism." What allowed a large middle class to appear in the West. For several decades, an ordinary person in the Western world enjoyed numerous benefits shared by the true masters of the West. The existence of the Soviet Union forced the Western "predators and aliens" to restrain their predatory and parasitic instincts. Otherwise, the population of Western Europe and the United States could overthrow the power of corporate and financial oligarchs.

Thanks to October, the great Soviet Union was created, which defeated Nazism and Fascism - the most striking manifestations of the Western masters' desire to create a global slave-owning civilization (eternal Reich, global Babylon), where a handful of "chosen" rule the enslaved peoples, and millions destroy the "subhumans". The Soviet Union showed humanity the main route to a future bright, sunny society - space exploration. He offered mankind a society of service and creation, social justice, instead of Western society of extermination and self-destruction (consumer society). The justice society, and the idea of ​​restoring the renewed Union - 2 - is currently the only salvation for the Russian multinational civilization. Russia-Russia entered the storm of a new world war and was faced with the threat of a new turmoil, since after the 1985-1993. social justice in Russia was violated, and the body of Russian civilization and Russian super-ethnos was torn apart.

On the Great October, many false myths were created. So, was created the myth that the Bolsheviks destroyed the Russian Empire and unleashed a civil war. In reality, the Russian empire was destroyed by the fundamental contradictions that had accumulated over the centuries in Russia. The incompetence of managers and unsatisfactory management during the reign of Nicholas II allowed these contradictions to break through. In particular, the Russian-Japanese and First World Wars became the detonators of the revolution, which Russia could have avoided under wise rule.

Taking advantage of the weakness of the tsarist government, the lack of a powerful and loyal state security system, a strong weakening of the personnel core of the imperial army (died in the unnecessary Russia’s war with Germany and Austria-Hungary), Representatives of the pro-Western liberal bourgeoisie and intellectuals led by freemasons, with the full support of the West, organized a conspiracy and quite easily overthrew Nicholas and destroyed the Russian autocracy. Virtually no one defended the king, but he himself did not resist. Even members of the Romanov family came out against him, the grand dukes sported red bows, becoming revolutionaries of the Februaryists. The entire elite of old Russia literally spoke against the Russian monarchy and Nikolai: grand dukes, aristocrats, generals and admirals, church hierarchs, members of liberal, left-wing and nationalist parties and movements, members of the Duma, industrialists and bankers, liberal intelligentsia (it was almost its own liberal, westernized). Freemasons acted as an organizing force. The February-March coup was actively supported by ambassadors of the Western powers, Western special services.

The Bolsheviks had nothing to do with February. All of their leaders and activists were in exile abroad or in prisons and exiles in Russia. After the Bolsheviks took defeatist positions at the beginning of the world war, their structures in Russia were defeated. They were extremely small, unpopular. They took a place on the sidelines of the political life of the Russian Empire. Lenin generally believed that during his life there would be no revolution in Russia.

Contrary to liberal propaganda and mythology, not the Bolsheviks destroyed the armed forces. Their decomposition began during the reign of the king - due to a number of defeats, “shell, artillery, gun famine,” rear turmoil, poor supply, command errors, etc. Fevralista killed the army in general, starting its “democratization” in a war, and finally collapsing the rear. Already during the Februarylists, the real Peasant War began - the peasants ravaged and burned most of the landed estates, divided the noble lands, killed the landlords. The peasants generally refused to recognize any authority, anarchy swept Russia. We must not forget that the peasants constituted the overwhelming majority of the population of the country. Later, it was the powerful peasant movement in the rear of the white armies that became one of the main reasons for the defeat of the White movement. A red managed to "reassure" the peasants only with great blood, but there was no other way, which was one of the main tragedies of the Civil War in Russia.

The Provisional Government was illegitimate from the very beginning; it had no real political or economic program. Since the February-March coup, which destroyed the autocracy and the rule of the Romanov dynasty, by the fall of 1917, the February-Westernists crushed all the foundations of the state in Russia - the monarchy (sacral power), the armed forces, law enforcement and legal system, the unity of Great Russia. Under the Provisional Government, the great criminal revolution began, with the creation of entire gangster "armies". The separation of the regions of the Cossack Troops, Finland, the Kingdom of Poland, the Baltic states, and Central Asian territories (Turkestan) began. The temporary workers did not even control Kronstadt. The Provisional Government did not have a real power in the country: there were parallel structures of the Provisional Government, the Soviets, the military, the nationalists. Part of the territory was occupied by Austro-German troops. Other territories generally fell into anarchy, did not obey anyone.

Another the myth is that the Bolsheviks launched the Civil War, overthrowing the legitimate government and seizing power in Petrograd. However, the Provisional Government was illegitimate from the very beginning. Formally, the government chose only some of the delegates of the Duma. When they came to power, the "temporary" rulers never wanted to assemble the State Duma, and then they dissolved it altogether. Their rule caused a complete collapse of the entire system of governance and power in Russia. In fact, “old Russia” has already died. The Bolsheviks simply took power. Not surprisingly, in such conditions, the Soviet government for three months was almost bloodlessly installed throughout Russia (the so-called Triumphal procession of Soviet power), with the exception of the Caucasus, the lands of the Cossack Troops and Central Asian territories.

Seeing that they are losing power and property, the Russian bourgeoisie, the capitalists (with their support the White movement will be organized), as well as various nationalists, gangsters and basmachis, tried to organize resistance. However, they all had no chance of unleashing a full-scale war. They could create only individual centers of resistance. Recall that the Volunteer Army of Alekseev and Kornilov had only a few thousand bayonets. The Reds would easily have transferred such foci, resist, with the support of the West, could only national suburbs. And for a large-scale Civil War, organization and resources were needed at a completely different level. The bloody slaughter in Russia was organized by the masters of England, France, USA, Japan (“partners” of Russia), Germany, Austria-Hungary and Turkey. And their "cannon fodder" were made by whites, nationalists and separatists, basmachis and gangsters.

The armed forces of the West and East occupied a part of the Russian land. Under their cover, on the outskirts, whites and national armies and various gangs were formed and armed. For example, under the wing of the Austro-German forces occupying the vast territory of Russia, the White armies, various national formations, etc., were formed. In particular, the Germans armed the Polish and Baltic nationalists, Petliurists gangs to the teeth. And the main goal of the former “allies” of Russia on the Entente was to create as many independent, “independent” state formations as possible on the territory of the former Russian Empire (all of them would become semi-colonies of the West), and direct capture of the most important strategic points (North, Black Sea, Far East ). White armies, fighting for a “united and indivisible” Russia, covered this process. The main initiator of the Civil War was the Czechoslovak Corps, which was supposed to occupy a huge piece of Russian land for the United States - Siberia (along the Trans-Siberian Railway - the only highway connecting European Russia with Siberia and the Far East). Also, the Westerners have armed to the teeth the armies of Denikin, Wrangel, Kolchak, Miller, etc.

Nevertheless, The Red Army defeated all the armies of the whites and the interventionists, most of the national formations and just gangs and saved Russia from complete collapse and destruction. Plans for the owners of the West were destroyed. In Russia, they began to implement a new development project and create the society of the future, saving not only their civilization, but the whole of humanity.

100 anniversary of the February Revolution
What ruined Tsarist Russia?
Nicholas II had no chance of retaining power.?
How Nicholas II abdicated the throne
"Russia plunged into the swamp of a dirty and bloody revolution"
The war for absolute power on the planet
Russian intelligentsia against the "kingdom of darkness"
The myth of the "Jewish Revolution" in Russia
How the Februaryists destroyed the army
How Kerensky became the destroyer of Russia and the Russian army
How the feudalists unleashed a civil war in Russia
How the Februaryists officially "buried" the Russian Empire
October saved Russia

Ctrl Enter
Noticed oshЫbku Highlight text and press. Ctrl + Enter
We are
On the anniversary of the October Revolution without fanaticismWhy Sobchak, Poklonskaya and Kadyrov want to bury Lenin
Military Reviewin Yandex News
Military Reviewin Google News
484 comments
Information
Dear reader, to leave comments on the publication, you must to register.