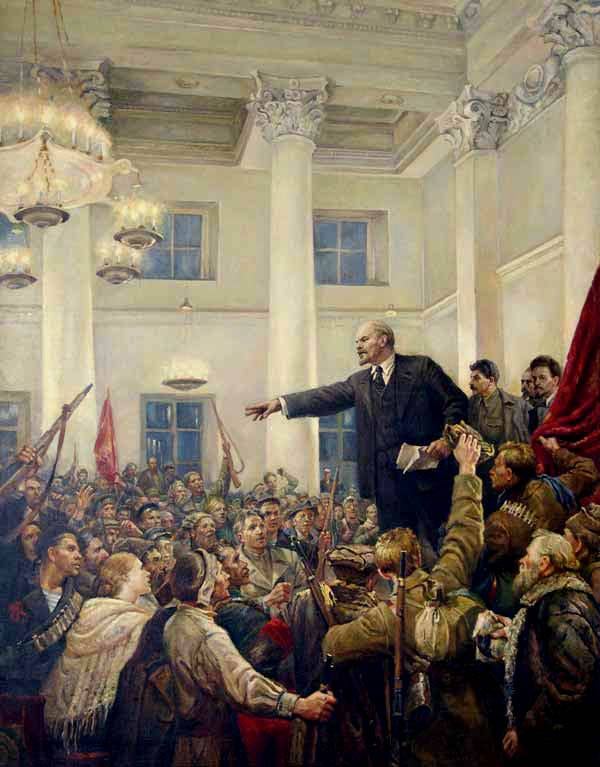 100 years ago, 25 October 1917, the Bolsheviks eliminated the February project to destroy the Russian civilization and the Russian people. According to the plans of the masters of the West (Britain, the USA and France), the feudalist Westerners were to destroy not only the autocracy and liquidate the project of the Romanovs, but also to destroy Russia itself as a unique civilization separate from the Western world.


The victory of February led to the collapse and destruction of the Russian state, civilization and the Russian people.which can flourish and build only within the framework of a strong empire (centralized power). The fevralists, most of the degenerated elite of the Russian empire (grand dukes, aristocrats, generals, representatives of the liberal-democratic and left-wing parties, deputies, members of masonic lodges, bankers, industrialists, representatives of "oppressed" national minorities, etc.) thought knocking down the Russian autocracy, seizing power in their hands, establishing “democracy” (in fact, the power of the wealthy, the owners), they will make Russia a part of “enlightened and civilized” Europe. However, the masters of the West used Russian Westernizers (the Februaryists) to destroy Russia-Russia, their thousand-year geopolitical adversary. As long as the Russian civilization and the Russian people exist, the masters of the West cannot build their own infernal slave-holding “new” world order on Earth.

In the 1914 year, the Russian Empire fell into a mortal trap, skillfully arranged by the masters of the West, entered into a fratricidal slaughter with the great German people (Russians and Germans are the greatest representatives of the Aryan-Indo-European family). The war was used to crush the main foundations of the empire building: the armed forces and the autocracy. The fevralists (freemasons, Western liberals) plotted a plot and, during the February-March coup of 1917, were able to overthrow the tsar and eliminate autocracy. After that, the Provisional Government, partly by design, partly by stupidity, lack of experience and understanding of the foundations of Russian statehood, finished off “old Russia”.

Before the October Revolution, the fevralists would finish off an extremely weakened, demoralized army, almost devoid of the old personnel core. In fact, the royal army will die along with the autocracy and the empire. Its decomposed residues will not be the backbone of the government, but another factor of unrest and anarchy. Even before the Bolsheviks, the former law enforcement, police system was utterly destroyed. Against the background of the hardest world war and many thousands of armed deserters in Russia, a criminal revolution began. Large gangs were formed, terrorizing entire cities and towns. Later, the Bolsheviks and the Red Army will have to wage a separate war with the "green" (bandits).

Under the Provisional Government, the collapse of Great Russia will begin, various separatists and nationalists will receive complete freedom. The rapid growth of various nationalist parties and movements will begin, they will form their "armies" and governments. What will be one of the main factors already beginning of the Civil War. Various nationalists (Finnish, Polish, Ukrainian, Crimean-Tatar, Caucasian, etc.), as well as aliens - Hungarians, Czechoslovakians, Chinese, Japanese - will cruelly cut the Russians. In the same row, the forerunners of modern jihadists are basmachis. The Russian Communists will have to endure the fiercest battle with the nationalists, separatists and Basmachis, who tore Russia apart, saving the unity of the Russian state.

With the February lists, another front will appear in Russia - the Peasant War. The peasants, who for centuries have been accumulating hatred for the landowners, will be freed from the royal power (sacral power), which restrained them. There will be no army that could calm them down with harsh punitive measures (following the example of the 1905-1907 revolution). The peasants after February 1917 will start their own war, destroy landlord estates and divide the land. They will not want to supply the city and troops with food at the prices offered by the authorities. And the surplus will begin under the tsarist and Provisional governments, even before the Bolsheviks. The Soviet government will also have to fight peasant freemen who do not want to submit to any authorities. The peasant war with its all-destroying fire and anarchy was one terrible threat to the state, and it was possible to eliminate it with a lot of blood, which was one of the biggest tragedies of the Revolution and the Civil War in Russia. Within the framework of this great tragedy, the fate of a special part of the Russian people - the Cossacks. The Cossacks also felt free, as centuries ago, began to create their own governments and autonomous (independent) areas-troops. Participated in the collapse of a united Russia, fought for the whites, and for the red.

The Provisional Government ended the other foundations of a single state — the transportation network was paralyzed, barely working, the supply of cities collapsed; in a number of places, people began to starve, in others, peasants hid bread "until better times"; industry degraded, etc. The Austro-German armed forces easily occupied the western regions of Russia. The masters of France, England, the USA and Japan divided Russia into spheres of influence, preparing to divide the “skins of the Russian bear”.

Thus, February killed the “old Russia” - the Russian autocracy, the Romanov empire, the state itself. There was a terrible disaster. Russian civilization and the people were on the verge of complete decay and destruction. The masters of the West - “aliens and predators” - would not give Russia any chance of rebuilding, even under the guise of “Russian democracy,” a part of “enlightened Europe.” They did not need Russia — neither tsarist, nor democratic, nor socialist. Russia was awaited by the fate of a semi-colony, the existence of a pitiful separatist Bantustan under the protectorate of the great powers of the West and the East. And the complete extinction of the identity of the once great Russian people.

All kinds of Westernist feudalists — Kerenskys, falcons, Milyukovs, Guchkovs and others — destroyed Russia and killed it (unfortunately, their ideological heirs, Gaidar, Chubais, Sobchaks, won during the counterrevolution of 1985-1993). It remained quite a bit until the complete collapse of Russia. However, there were people who decided to take power into their own hands and to offer the peoples of the Russian civilization a new development project in which there would be no social injustice, oppression and exploitation by a few parasites of the majority. They were Bolsheviks, Russian communists. They had a development project in the interests of the overwhelming majority of the people, an idea, a program and a will. Therefore, they were able to defeat the whites (proteges of the losers of the feudalists, the bourgeoisie and capitalists, the West and the East), and the nationalists, and the Basmachis, and the Cossacks, the peasant freemen, and bandit formations, and throw the interventionists from Russia. They created the greatest in stories mankind Soviet project and civilization, the mighty Soviet Union. They offered the world an idea of ​​a society serving I and creation, social justice and the domination of the ethics of conscience. October saved Russia.

Thus, the Russian Communists offered mankind an image of a just world order, without parasitizing the few “chosen” over the masses. It was the society of the future - “beautiful far.” Therefore, Russian (Soviet) people were so loved and respected in Cuba, Vietnam, China, North Korea and other parts of our planet, where people and ordinary people have already experienced the horror of the domination of slave owners, Western "predators and strangers."

It is worth noting that many of the successes of modern China (which has become the second economy of the world and the new center of power on the planet) are connected precisely with the fact that the Celestial Empire adopted the Soviet experience, primarily the Stalinist empire.

It is clear that the Bolsheviks were not united. The core of the Russian Communists dreamed of a better world, social justice. They were supported by a mass of simple Bolsheviks. But there were "Agents of influence" of the West, the so-called. Trotskyist internationalists, led by Trotsky, Sverdlov, and others, who were supposed to complete the plundering and pogrom of Russian civilization, finish off Russia. Also, according to the Western masters, they conducted field tests of a new model of slave-holding civilization in Russia, in order to spread it over the entire planet - the pseudo-communist (Marxist) system of a crowd-elite society. With such a model, people were deceived by the images of the “bright future”, large-scale repression and terror were used against the dissenters. And in fact, everything remained as before: the domination of the caste of the "elect" over the masses of the people. However, the Russian Communists, led by Stalin, broke this sophisticated plan of the owners of the West. Hence the mystery of the “great cleansing of 1937 of the year” and the inconsistency of repression, when at first the masses of innocents fell under the knife, and then the initiators of mass terror themselves.

100 anniversary of the February Revolution
What ruined Tsarist Russia?
Nicholas II had no chance of retaining power.?
How Nicholas II abdicated the throne
"Russia plunged into the swamp of a dirty and bloody revolution"
The war for absolute power on the planet
Russian intelligentsia against the "kingdom of darkness"
The myth of the "Jewish Revolution" in Russia
How the Februaryists destroyed the army
How Kerensky became the destroyer of Russia and the Russian army
How the feudalists unleashed a civil war in Russia
How the Februaryists officially "buried" the Russian Empire

Ctrl Enter
Noticed a mistake Highlight text and press. Ctrl + Enter
We are
Results of the week. "In the queue, sons of bitches, in the queue!"Results of the week. "Well, do not change me because of every idiot!"
332 comments
Information
Dear reader, to leave comments on the publication, you must to register.