Mystery of the Russian Horde and Great Tartary 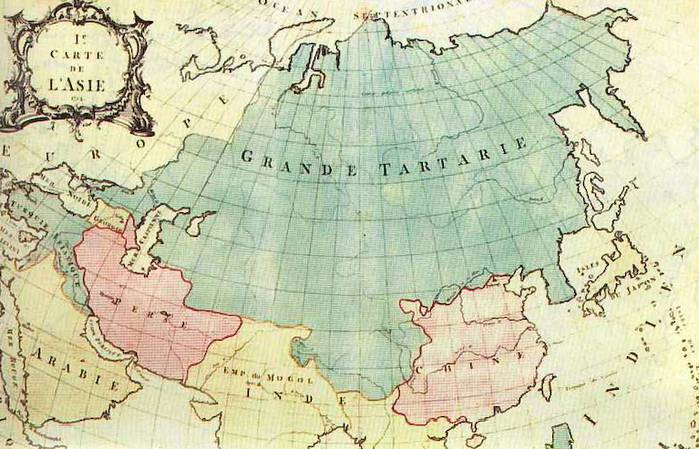 Tales about "Mongols from Mongolia" were created in the West in order to confuse Russians, cut off and distort history Rus. To forever destroy the memory of "Tartaria" - the Russian-Horde Empire, which was the direct heir of the great northern civilization - Great Scythia.

Russia and the Horde

Contrary to the myth created in the Vatican and supported by all the information and ideological power of the West (including the Westernizers in Russia itself), the "Mongols-Tatars", and before them the Polovtsians, were not representatives of the Mongoloid race. Anthropological studies of the XNUMXth – XNUMXth centuries. show the complete absence of the Mongolian element in Russia. There was no Mongol invasion of Russia. And the Mongol empire never existed (The myth of the "Mongol-Tatar" invasion; Part 2). The invasion itself was, there were battles, storms of cities, robberies, fires, thousands of captives and tribute. There were "labels", contracts, joint campaigns.

To understand who conquered the Rus of the steppe (Polovtsy, Alans) and the Rus of the forest-steppe and forest zone, and before that Central Asia, China, the Caucasus, it is simply necessary to define the people, the ethnocultural, linguistic community that has inhabited Northern Eurasia for thousands of years. From legendary Hyperborea and the land of the Aryans to Great Scythia, Sarmatia and Novgorod-Kievan Rus. In the strip from the Black Sea region to Altai and Sayan and further to the Pacific Ocean, there was no other force, except for the late Rus-Siberians, heirs of the vast and mighty Scythian-Siberian world. This topic (with sources and facts) is disclosed in more detail in the works of N. I. Vasilyeva, Yu. D. Petukhov "Russian Scythia", Yu. D. Petukhov "Secrets of the Ancient Rus", Yu. D. Petukhov "Antiquities of the Rus", etc. .d.

The ancestors of the modern Mongols were then at a low level of development (shepherds, hunters), approximately like the North American tribes of the Indians. They had neither the military, nor the economic, nor the spiritual and cultural potential to make a number of large-scale campaigns and create a continental empire. Only hundreds of clans of Rus, united by one language, thousands of years of spiritual traditions, including the military, an appropriate economic base (in particular, developed metallurgy), possessed such a potential. The real "Mongols" were the Rus, fair-haired light-eyed warriors in many generations. Hence the legends about the fair-haired blue-eyed Genghis Khan, the myths about the distant ancestors of the present peoples of Asia - tall, fair-haired giants.

It was the Rus of the late Scythian-Siberian world that created the great "Mongol" empire, the "Tartaria" of European sources. It included the Polovtsian steppe, Ryazan, Vladimir, Novgorod, Kiev, Chernigov and Galician Rus. No Mongols. Caucasians-Rus and Caucasoids-Tatars, who not so long ago isolated themselves from the general cultural and linguistic community and did not lose the characteristics common to the northern tradition. Tales about the "Mongols from Mongolia" were created in the West in order to confuse the Russians, cut off and distort the history of Russia. To forever destroy the memory of "Tartaria" - the Russian-Horde Empire, which was the direct heir of the great northern civilization - Great Scythia. To erase the Rus-Russians from the history of the Ancient World. 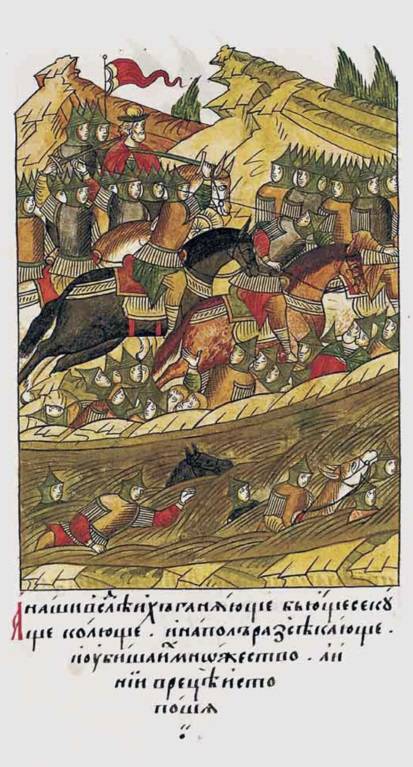 Battle on the Vozha River in 1378. Source: Miniature from the Observational Codex of the XNUMXth century. Miniatures of historical sources show that the battles were fought by representatives of the white race (Caucasians)

Around the time of Dmitry Donskoy, the Horde (Rod) began to degenerate and degenerate. This was caused by the total Islamization and Arabization of the northern state. It was promoted by a powerful flow into the Golden (White) Horde of the Arabs. The top of the Horde was Islamized, the part that resisted was destroyed. Culture has undergone Arabization. This was the root cause of the turmoil and the collapse of the mighty empire. And the history of the Eurasian empire has come down to us in the "crooked mirrors" of Western and Muslim sources.

If we realize that in the late Middle Ages, as well as in the early and ancient times, the entire continental part of Northern Eurasia, “Great Tartary” from the Dnieper, Don and Volga to Siberia was inhabited by the Rus, direct descendants of the Aryan-Scythian-Sarmatians, then it is clear why in Western Europe the concepts "Russia" and "Tartary" meant the same thing. As before, the Greek (Byzantine) chroniclers identified the Rus with the "Taurus" and "Scythians", and Russia with Scythia. For a long time Russia on European maps was designated as "Tartaria", Russians were called "White Tatars". Cossacks, that is, the military estate of the steppe regions of Russia, back in the XNUMXth century. were called "Tatars". The "Cossacks" were ordinary members of the Horde.

Thus, most of the subjects of the Horde were Rus (Alan Rus, Polovtsian Rus, Siberian Rus, Ryazan Rus, Muscovite Rus, etc.). All the wars of this period in the Horde are internal wars, strife. Like a fight between Moscow and Ryazan, Tver and Novgorod. The Russians fought, killed, plundered, and took away Russians. No "Mongols". Tatars, Tatars-Bulgars (Volgars), however, were a genus close to the Rus, Caucasians. Therefore, the Horde, "Tatar" nobility, warriors easily switched to the service of the Russian and Russian-Lithuanian princes. They entered into marriage unions, became part of the elite of the Russian state. In particular, one third (or even half) of the aristocracy of Moscow consisted of "Tatars". No "Mongolian" signs. " The Horde easily entered the new northern empire, the center of which was Moscow.

The birth of a new Eurasian empire was caused by strong pressure from foreign, southern traditions. The nobility of the Horde converted to Islam. This caused a sharp rejection of the main population of the horde-clans. They still continued to be faithful to the ancient faith. Thus, in the "Tale of the Mamayev Battle", a Russian literary monument of the XNUMXth century, the gods worshiped by the "Tatars" are mentioned. Among them are Perun, Khors and Rekliy. The mysterious "Reklius" is most likely the hero of the Rus mythology, who became a god for the Tavro Scythians - Hercules. This name comes from the Russian Yaro-Slav - Herakleos ("kleos" - "glory"), which in related languages ​​sounds like Irakl, Irakli. The cult of Hercules-Heraclius had strong positions in Taurida and the Northern Black Sea region.

That is, at the end of the XIV century, Islam was not the dominant religion in the Horde. The degradation of the Horde (Rod) led to the rise of a new political center of the Rus - Moscow. Another possible center for the unification of all Russian lands was the Great Lithuanian and Russian principality, with the state Russian language, the predominance of Russian lands and the Russian population. However, the gradual Westernization and Catholicization deprived the Grand Duchy of the chance to become the center of the unity of the Russian lands. The Horde plunged into turmoil and degraded due to Islamization and Arabization. Gradually the elite of the Horde lost the support of the people. Simple warriors-Cossacks and many representatives of the nobility reached out to Moscow, Ryazan, Lithuania. Russian Christianity, which absorbed much of the ancient Russian faith (paganism), became Orthodoxy - "the glory of Pravi-Pravda", was much closer to the ordinary Horde-Cossacks than Islam.

As a result, the Kulikovo field, when Dmitry Ivanovich defeated the hordes of Mamai, showed that a new center of gravity had emerged for all Russians, including the Cossack Horde. The center that inherited the thousand-year traditions of northern civilization. For a century and a half, this center was able to restore the main core of the Eurasian empire. Tsar Ivan the Terrible united most of the lands of Great Scythia - Great Tartary. The empire was rebuilt and again became a counterweight to the West. Gradually, Russia became an empire again, which stretched from the Baltic, Carpathians and the Black Sea to Mongolia and further, to the Pacific Ocean.

How the Russians converted to Islam
The Mystery of Russian Khazaria
"Slavic Atlantis" in Central Europe
Arsa-Artania - the ancient power of the Rus
The myth of the Tatar-Mongol yoke
There were no Russians? The mystery of the origin of the Russian people
The roads of the gods. Why Russians Crossed Out From Ancient History

Ctrl Enter
Noticed oshЫbku Highlight text and press. Ctrl + Enter
We are
"Imaginary Eurasia"“Without Horde”
491 comment
Information
Dear reader, to leave comments on the publication, you must to register.