A helicopter against the tank. Standoff more than half a century long

The history of the formation of confrontation

The experience of the Second World War clearly showed the power of mobile armored units. In the considered variants of military confrontation between the USSR and the NATO countries, armored formations were assigned the leading role in the implementation of deep breakthroughs in the territory of the countries of Western Europe, with access to the English Channel as soon as possible. 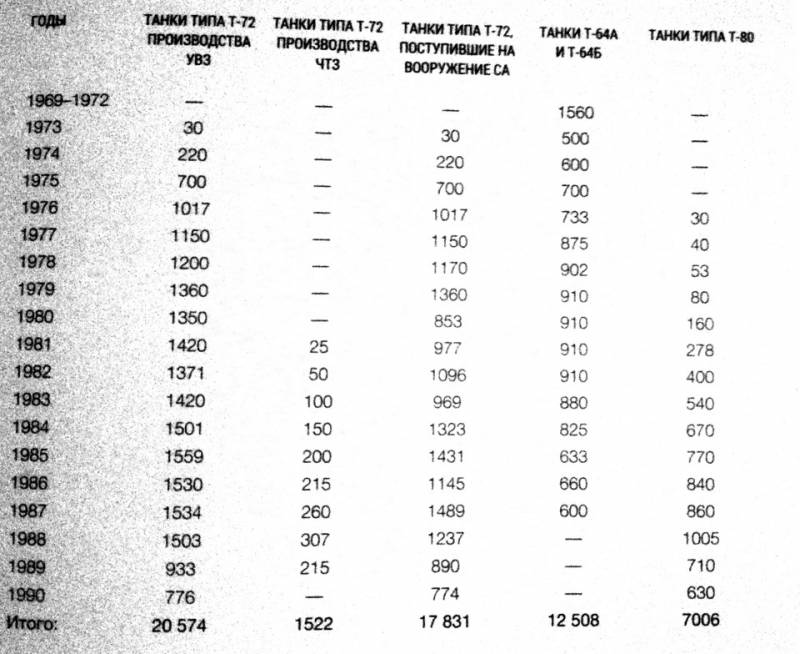 Overclocked during the period of the Great Patriotic War, the production of tanks in the USSR and after the end of the war did not slow down much. By the time of the collapse of the Soviet Union, the number of tanks in service and in storage was, according to various estimates, about 63 — 69 thousand units, the number of infantry fighting vehicles (BMP) and armored personnel carriers exceeded 75 thousand units.

Of course, such a threat demanded that the armed forces of Western countries search for solutions to neutralize it. One of the most effective ways to counter the Soviet tank threat was the creation of combat helicopters with anti-tank guided missiles (ATGM).

The first X-7 Rotkäppchen ATGM (“Little Red Riding Hood”) appeared in Nazi Germany during the Second World War, but their use was not systematic. At about the same time, the first serial helicopter appeared - the American Sikorsky R-4 Hoverfly. It was as a result of the "crossing" of the helicopter and the ATGM that the most effective anti-tank weaponfrom all existing.

Conventionally, combat helicopters can be divided into two types. The first includes combat helicopters, created on the basis of multi-purpose vehicles, which, during the revision, hung ATGM and elements of the guidance / control system. The lack of machines of this type is often a lack of security, a limited set of weapons and over-weight due to the cargo-passenger cabin (if the basis was a transport helicopter). Examples of such helicopters include the German multipurpose and attack helicopter Bo 105 or the British Westland Lynx.

The first such helicopter was the American Bell AH-1 Cobra, adopted in 1967. The design of the helicopter was so successful that its modified versions are still used by the US Marine Corps, the armed forces of Israel and other countries of the world. The Bell AH-1 Cobra helicopter was primarily intended for aviation support, but its anti-tank modifications could carry up to four TOW ATGMs, and in the latest versions of the AH-1W and AH-1Z helicopter can carry up to eight completely modern AGM-114 Hellfire ATGMs. 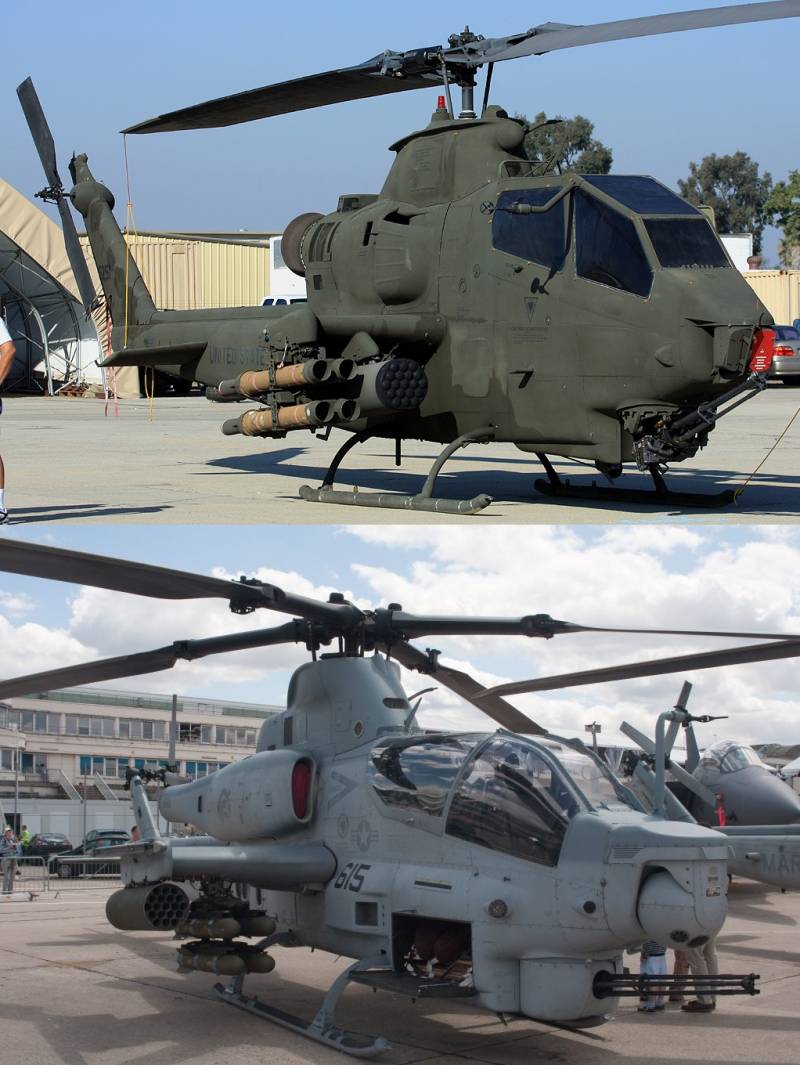 The imperfection of the guidance systems and the ATGM of that time ensured the likelihood of armored vehicles being hit by a helicopter from a helicopter with a probability of about 0,5 — 0,6, but this was only the beginning.

The main threat to Soviet armored vehicles was the latest AH-64 Apache attack helicopter, adopted in the 1984 year. This helicopter was originally intended to fight enemy tanks at any time of the day and is capable of carrying up to 16 the latest AGM-114 Hellfire ATGMs with a firing range of 7 km in earlier versions and 11 km in the latest versions. The AGM-114 Hellfire provides several homing heads - with semi-active laser or active radar homing. At the moment, AH-64 Apache in versions “D” “E” remains the main combat helicopter of the US Army and no direct replacement is expected. In the AH-64D modification, the helicopter received a sub-submarine radar, which allows for reconnaissance and use of weapons from behind the jump, and in the AH-64E modification, the ability to control the UAV’s slave. 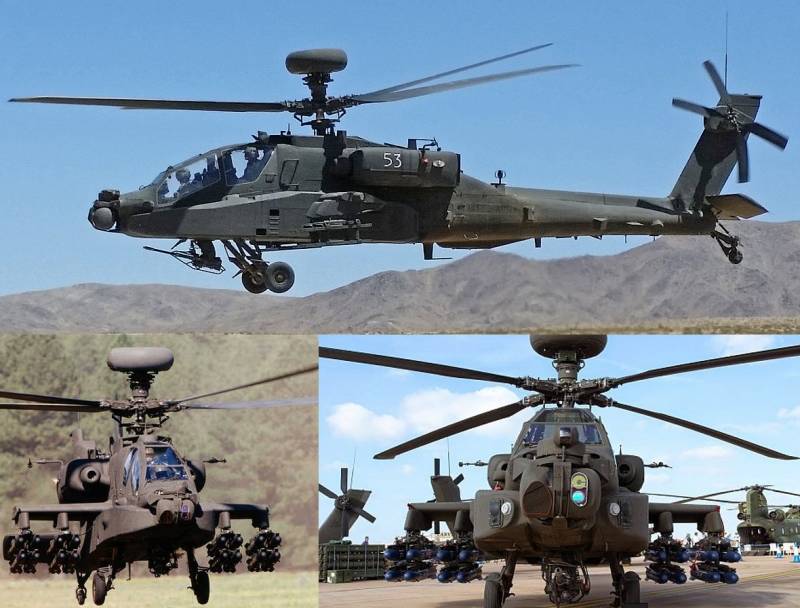 Attack helicopters of varying degrees of success have also produced other countries, of which we can mention the Franco-German helicopter Tiger (Tiger) of the company Eurocopter, the Italian A129 Mangusta of the company Agusta and the South African AH-2 Rooivalk (Kestrel).

In principle, the title of the article “A helicopter against a tank” is not entirely correct, since in fact the tank cannot oppose anything to the helicopter, not considering an anti-aircraft gun of 12,7 mm caliber as an effective means of defense. Even setting remotely controlled weapon modules (DUMV) with 30-mm gun will not allow the tank to effectively confront modern military helicopters.

Exercises conducted in 80-ies of the XX century, showed the ratio of the losses of combat helicopters to armored vehicles as 1 to 20. In addition, Assault Breaker-type reconnaissance-strike complexes (ARMs), capable of striking armored vehicles with high-precision submunitions, loomed on the horizon. As a result of the emergence of the above-mentioned threats, the view was increasingly heard about the decline of tanks as a class of combat vehicles.

The response to increase the survival of armored vehicles on the battlefield, was the development of military air defense.

Anti-aircraft self-propelled units (ZSU) of the Shilka type could not effectively deal with helicopters due to the small firing range. The Strela-60 and Strela-70 anti-aircraft missile systems (ZRK) developed at the end of the 1-X-beginning of the 10-s as the main guidance mode used the selection of a contrast target against the sky (photocontrast mode). This did not allow attacking targets against the background of the earth, which is relevant when repelling the threat posed by combat helicopters. In the Strela-10, the infrared guidance mode was used as a backup, but its operation required the cooling of the infrared homing head (ICGSN) with liquid nitrogen located in the body of the missile container. If IKGSN was activated, but subsequently the launch was canceled, for example, if the target left the zone of visibility, then it was no longer possible to reuse the infrared targeting mode due to the absence of nitrogen. Thus, the above air defense systems cannot be considered a full-fledged protection against helicopter gunships with anti-tank missiles.

The Tunguska anti-aircraft missile and cannon system (ZRPK) and the Tor-M1 air defense system became the first effective military air defense systems capable of fighting helicopter gunships. A special feature of the Tunguska air defense missile system was the possibility of hitting targets with anti-aircraft guided missiles (SAM) in the amount of 8 units, at a distance of up to eight kilometers, and two twin 30-mm automatic cannons, at a range of up to four kilometers. Guidance is carried out both by data from a radar station (radar), and by data from an optical-location station (OLS). Supersonic flight speed Zur provides defeat carrier (combat helicopter) earlier than the ATGM, which our opponents are mostly subsonic, will be able to hit the target. In case the anti-tank guided missiles are not equipped with an autonomous homing head and require carrier tracking of the target during the entire rocket flight, this makes defeat of the armored vehicles they protect unlikely.

The Tor-M1 complex can hit targets vertically with launching missiles at a distance of up to twelve kilometers. 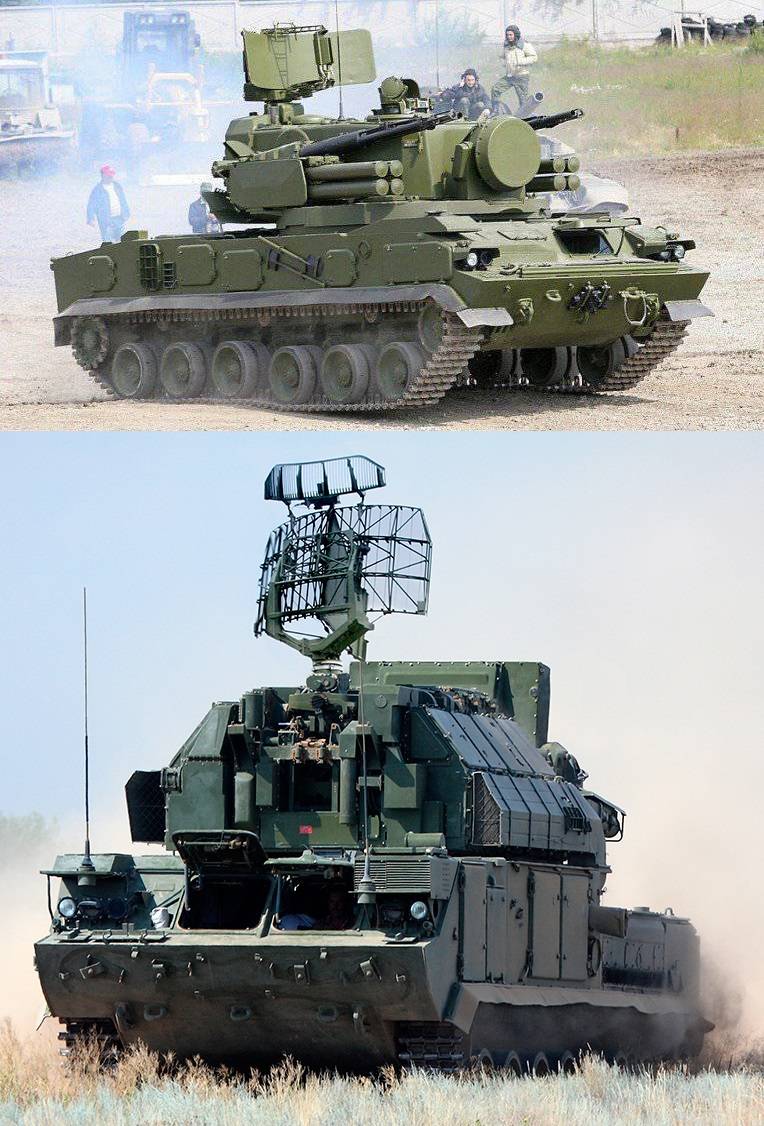 
In general, the Tunguska air defense missile system and the Tor-M1 air defense system allowed for some time to significantly increase the combat stability of armored formations, protecting them from air threats in general, and from combat helicopters with an anti-tank missile system, in particular.

Current trends in the confrontation "a helicopter against a tank"

However, time does not stand still. In the confrontation of armored vehicles and combat helicopters, the latter have new advantages.

First of all, the range of use of anti-tank guided missiles increased significantly. For new US JAGM ATGMs (Joint Air-to-Ground Missile), designed to replace AGM-114L Hellfire Longbow ATGM, the launch range of 16 kilometers when launching from helicopters and up to 28 kilometers when launching from airplanes is declared, which allows it to be used outside the military range Air defense. The JAGM ATGM includes a three-mode homing head with infrared, active radar and laser guidance channels, which makes it possible to hit targets with a high probability in a difficult jamming environment in the “started and forgotten” mode. The purchase of JAGM ATGM for the US Army is planned from 2020 onwards. 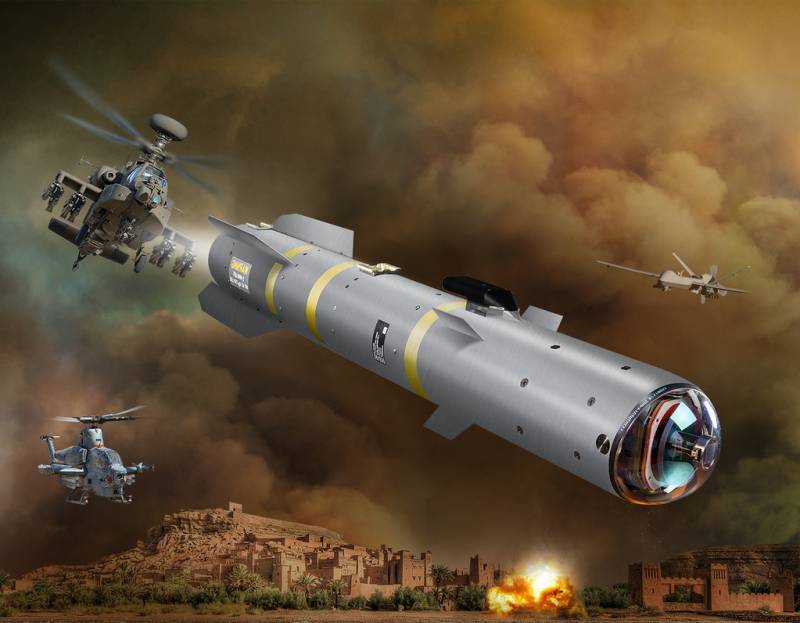 Since the advent of the AGM-114L Hellfire Longbow ATGM equipped with an active radar homing head, AH-64D Apache helicopters have been able to hit targets using the “jump” mode. In this mode, the combat helicopter gains altitude for a short time to search for and capture a target, after which it launches an ATGM from ARLGSN and immediately decreases, hiding in the folds of the terrain. In the homing mode ATGM does not require continuous tracking of the target carrier, which significantly increases the survival rate of the latter.

A radical solution could be the use of missiles with ARLGSN, capable of hitting helicopters hiding in the folds of the terrain. Only the development and use of such missiles as part of the Tor family or the Pantsir-SM air defense system (or any other short-range air defense system) can effectively deal with helicopters capable of attacking targets. The absence of missiles with ARLGSN as part of short-range complexes will require the involvement of at least medium-range air defense systems for solving problems of protecting armored vehicles from attack helicopters, which can hardly be considered an effective solution.

An alternative is the radar on the air defense system to a height sufficient to detect hidden targetsIn this case, the task of controlling the missile defense outside the ground radar should be solved (the transfer of the task tracking and missile guidance from the ground radar to the radar stationed on a quadrocopter or helicopter type UAV). The advantage of this solution is the lower cost of hitting the target, since the cost of a missile defense missile system with ARLGSN is higher than the cost of a missile with radio command guidance. The downside is the limited number of channels simultaneously accompanied by goals.

Partly to protect the tank from air strikes can active defense systems (KAZ), gradually gaining their place on the tank armor. Given that the majority of the ATGM of the likely enemy is subsonic, they may well be intercepted by the KAZ. The most difficult target for the KAZ is the ATGM attacking in the upper hemisphere, and of course the problem of oversaturation of the active defense complex capabilities to repel simultaneous attacks with several ammunition will not disappear anywhere.

Do not forget that in the United States are actively developing projects of promising combat helicopters capable of moving at a speed of about 500 km / h. At the moment, these machines are at the testing stage, but their appearance in service with a potential enemy can be considered only a matter of time. This means that after the launch of the ATGM, they will be able to quickly change their position, which will allow them to leave the capture zone of the ARLGSN before the missile defense system moves closer to a confident target. 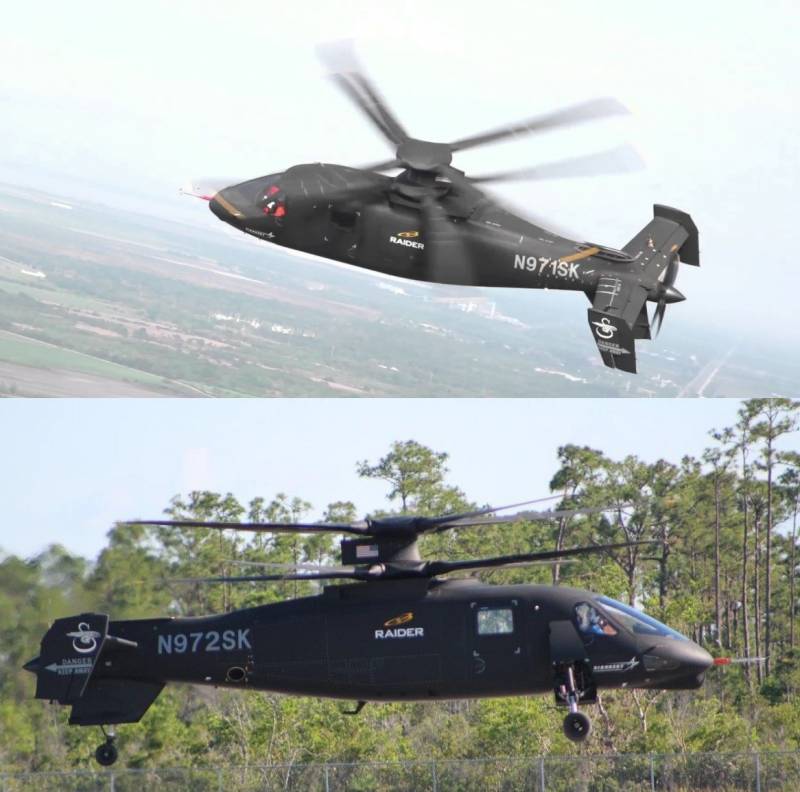 The prospect of the emergence of high-speed combat helicopters emphasizes the importance of creating a missile defense system with hypersonic flight speed on most of the trajectory. At the site of work ARLGNS, the speed can be reduced to prevent the formation of a plasma layer that prevents the passage of radio waves (if the problem of permeability of such a layer has not been solved yet). 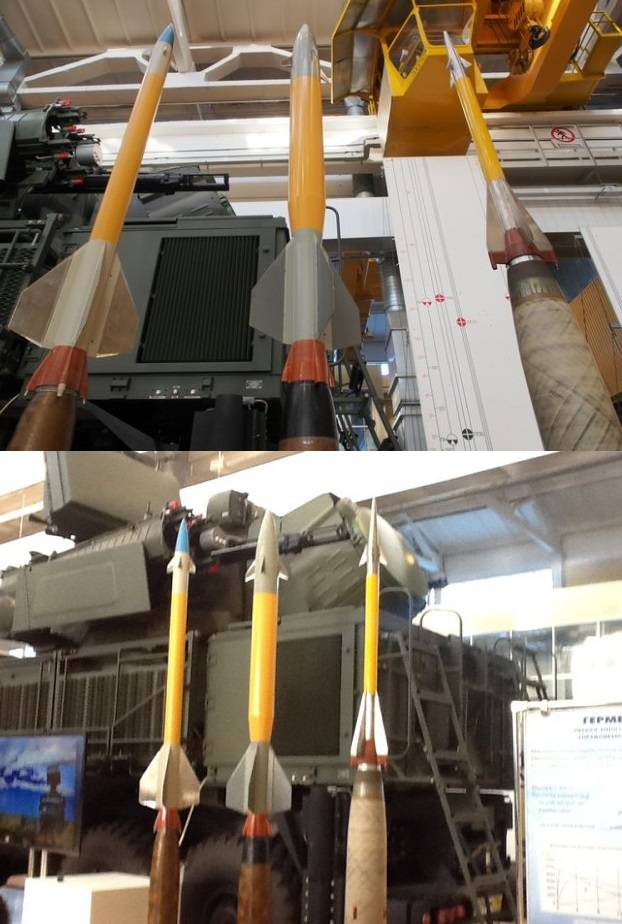 Presumably, hypersonic ZURK / ZRPK Pantsir-SM (right) with a firing range of up to 40 km, on the left, an anti-tank missile system at the Pantsir-S, in the center - the Hermes-S ATGM

At the moment, for armored vehicles, the main threat is not enemy tanks, but masked manpower and aviation. This situation has persisted for a long time, and it is unlikely that it will change in the near future. In the end, this can significantly affect the composition of weapons, the structure of active protection complexes and the reservation scheme of main battle tanks, which we will discuss in future materials.

Ctrl Enter
Noticed oshЫbku Highlight text and press. Ctrl + Enter
We are
Family BTR-60 / 70 / 80 in combatIs the "old" well forgotten to become the "new"? Part-2. At the call of honor and duty
Military Reviewin Yandex News
Military Reviewin Google News
195 comments
Information
Dear reader, to leave comments on the publication, you must sign in.