Air reconnaissance assets will always have an advantage over ground based, at least for the reason that the range of ground equipment is limited by curvature of the surface, natural (mountains, hills, forests) and artificial (buildings and structures) obstacles. Accordingly, the worse the review - the more uneven terrain, green spaces, buildings, the greater the threat this terrain poses to ground forces. This is confirmed by numerous local conflicts, when the greatest loss of armored vehicles carried in the mountains or during the storming of settlements. In the absence of advanced reconnaissance, armored vehicles can only rely on high reaction rate on the attack and its ability to “take a punch”.

Proposals for the destruction of cities by massive artillery strikes or even nuclear weapons hardly worth considering seriously, because it may be unacceptable for political and ethical reasons. In addition, a situation may arise when the enemy carried out an operation to seize the city, in which case the non-evacuated population would become his “human shield”.

At the moment, the best solution is the combined actions of infantry and armored vehicles, but this is largely reduces the mobility of ground forces (it is easy to imagine how much the speed of movement of the columns will decrease when accompanied by their infantry).

Air Force can provide additional intelligence information to the ground forces, but their priorities will always be shifted towards solving their own tasks, while manned vehicles operating at low altitude and low speed are extremely vulnerable to enemy fire from both small arms and weapons. and from man-portable air defense systems. In other words, to ensure continuous air support of the ground forces of the Air Force will not be able to at all desire, and the ability of aviation to detect a disguised enemy will be limited by the height and speed of the flight of the aircraft. In addition, air support is more effective against enemy armored vehicles than against dispersed and disguised manpower.

In fact, what they usually like to compare Tanks the armed forces of the countries of the world, that is, a “tank-against-tank” confrontation, can be considered the least likely scenario of a military conflict, since the main threat to the tanks is precisely aviation and the masked enemy manpower with anti-tank weapons.

A distinctive feature of the armed forces of the XXI century is their saturation of unmanned and remotely-piloted aircraft (UAVs and UAVs), ground, surface and underwater robotic complexes.

The tasks of unmanned and remotely-manned complexes range from actions in the interests of individual servicemen, launched for the UAV from a Black Hornet micro-helicopter, to solving strategic tasks with extremely complex systems such as the American strategic reconnaissance UAV RQ-4 Global Hawk or the Russian submarine “Submodon” ".

In the interests of armored vehicles, small, relatively low-altitude UAVs with long duration of flight can carry out reconnaissance, such as, for example, the Corsair UAV, developed by JSC Luch. The possibility of a long stay in the air will allow the UAV to “hang” over the battlefield, promptly providing intelligence to the ground forces. The survival of the UAV should be ensured by their low visibility in the radar, infrared and optical range. 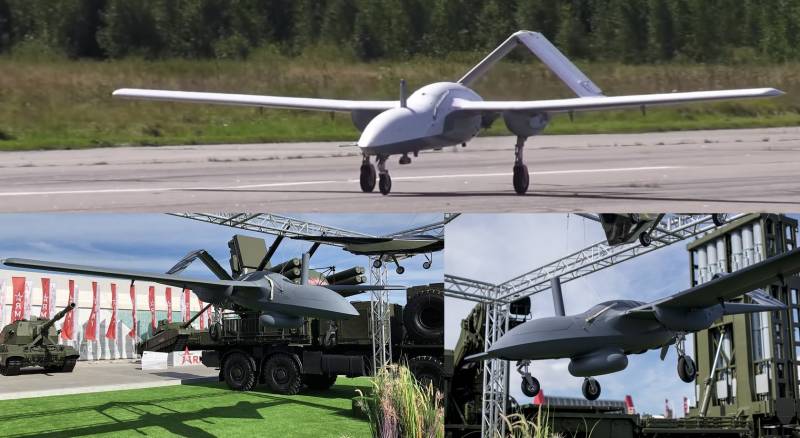 Nevertheless, despite all the benefits that can be brought to the UAV type "Corsair" they can not be considered the solution to all problems in providing armored vehicles with intelligence information. Such UAVs can act in the interests not of each specific unit of armored vehicles, but only in the interests of a group of armored vehicles. At the same time, the high rate of change of the situation on the battlefield can make the intelligence provided by the UAV obsolete even when it is transmitted in real time.

UAV on the tank

The miniaturization of the UAV allows you to consider the possibility of placing them directly on the tank. In particular, the option of placing such a UAV on armored vehicles of the Armata platform is being considered. The drone must take off with a special mount on the body and return to it. The UAV control and its power supply should be carried out using a flexible cable. The development of the Pterodactyl UAV for the Armata platform is carried out by the Aviation Robotic Systems Department of the MAI.

Another similar complex is a quadrocopter (hexacter / octacopter) type UAV, first introduced in 2016 year and intended for use in armored vehicles as a highly mobile reconnaissance vehicle. 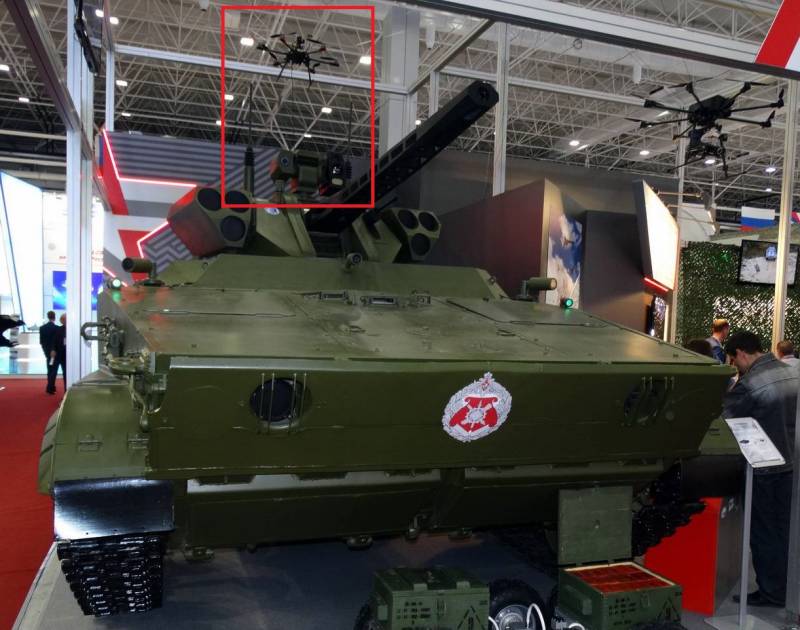 UAV "Whirlwind" on a flexible cable above the armored vehicle

Given the pace at which the quadcopter type UAV market is growing, it can be assumed that their design will be rapidly improved. Therefore, the emergence of this type of UAV as part of the standard intelligence equipment of armored vehicles can only be considered a matter of time. 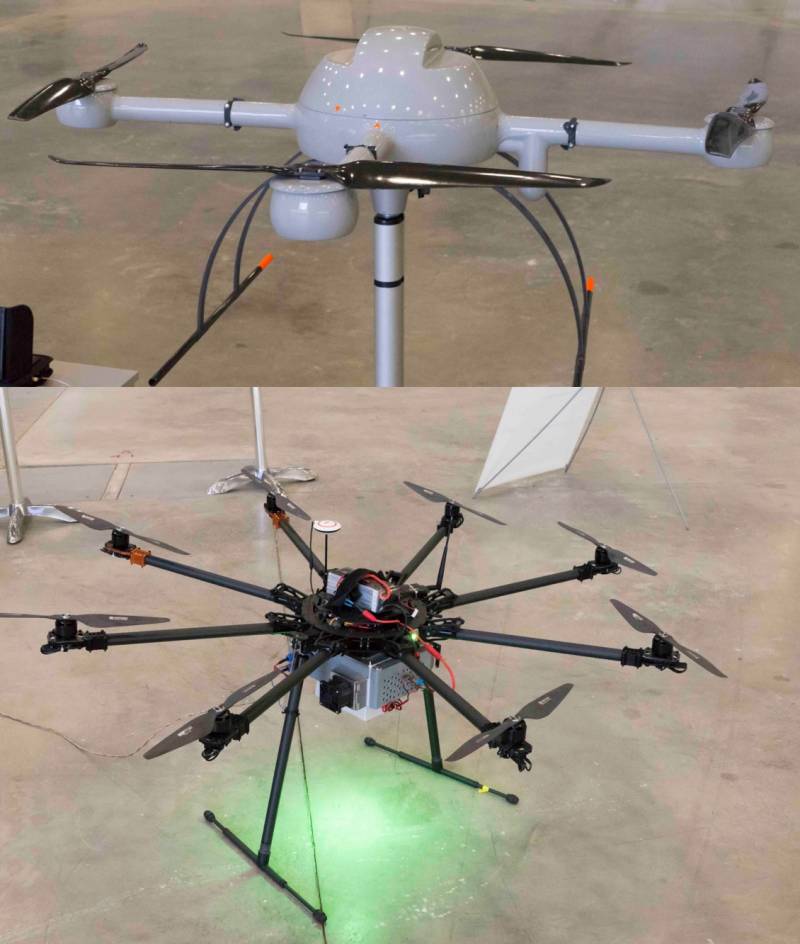 It can be assumed that the “tank” UAV will differ from its civilian counterparts in a reinforced design. Providing power to the UAV via a flexible cable will increase the drive power and capacity, which can be used to increase the security of the UAV from fragments and collisions with obstacles. In case of cable breakage or the appearance of the need to go beyond its length, the UAV should be equipped with backup batteries for 5-10 flight minutes and a backup radio channel for data exchange.

In the previous material we said that improving situational awareness, optimizing the ergonomics of the crew cabs and using high-speed guidance drives would allow one of the crew members to be abandoned without loss of combat effectiveness. In this case, you can combine the position of commander and gunner. However, the emergence of UAVs as part of armored reconnaissance assets requires a separate operator to control it. It is on the commander of the armored vehicle that this task should be assigned. The expanded overview, which the UAV will provide to the commander of the armored vehicle, will allow him to timely detect targets hidden by terrain, natural or artificial barriers, and mark their position on a digital map of the terrain.

This article does not consider ground-based robotic systems, since from the point of view of situational awareness, they will not give the armored vehicles significant advantages, and the implementation of existing solutions raises certain questions. Perhaps we will return to the ground reconnaissance and combat robotic complexes in a separate material.

The influence of the UAV on the tactics of armored vehicles

In addition to the early detection of the enemy, "eyes in the air" will allow armored vehicles to use weapons outside the zone of visibility of ground reconnaissance assets. The main armament of armored vehicles operating directly on the battlefield (we do not yet consider artillery and various missile systems) is designed to hit targets with direct fire, but it can also be used to effectively defend targets, consider several options:

1. When an armored vehicle moves in urban development, the commander, using a UAV, finds sheltered rocket launchers on the upper floors of the building, waiting for an opportunity to attack from the rear hemisphere. Gunner using DUMV with a caliber gun from mm 30 can destroy rocket launcher calculations using projectiles with a contact fuse or remote blasting on the trajectory, or armor-piercing feathered subcaliber projectiles (BOPS) capable of penetrating the walls of most modern buildings with the formation of a field of secondary attack elements (brick and concrete chips).

2. When driving over rough terrain, with the help of a UAV, an ATGM calculation was discovered, hidden from the main assets of the armored reconnaissance by a natural barrier. Depending on the distance to the target, it may be hit by projectiles of rapid-fire cannons or a tank gun with remote disruption on a trajectory or an anti-tank missile with a missile also with the implementation of a remote disruption mode on a trajectory.

3. When driving in urban development UAV detected firing point or armored vehicle of the enemy, located around the corner or on the other side of the building. In this case, the option of defeating the target of the BOPS tank gun can be considered. According to some reports, when firing a tank guard in the end of the building, he punches him to the fourth entrance. Theoretically, this allows you to hit lightly armored targets, and possibly tanks (in side projections) placed behind the building. Of course, this will require tests to confirm the possibility of hitting targets behind an obstacle in terms of energy and the accuracy of hitting the projectile after flying through a building. In an alternative embodiment, the armored vehicle is put forward to defeat the target from the side that is worse controlled by the enemy (the weapons and observation devices are turned away).

Shooting for the horizon

Guided high-explosive fragmentation (RP) projectiles can be used as weapons of a tank for hitting targets out of sight, which can be easily adapted for 125 caliber mm guns. In case of adopting a 152 caliber mm gun from it, existing Krasnopole guided artillery shells (UAS) with a range of about 25 km can be used.

From the armament of infantry combat vehicles (BMP), anti-tank guided missiles (ATGM) of the Kornet type can be used with a firing range of up to 10 km or the promising Hermes long-range ATGM. Of course, for the use of the above ammunition, the UAV must be equipped with the appropriate equipment. 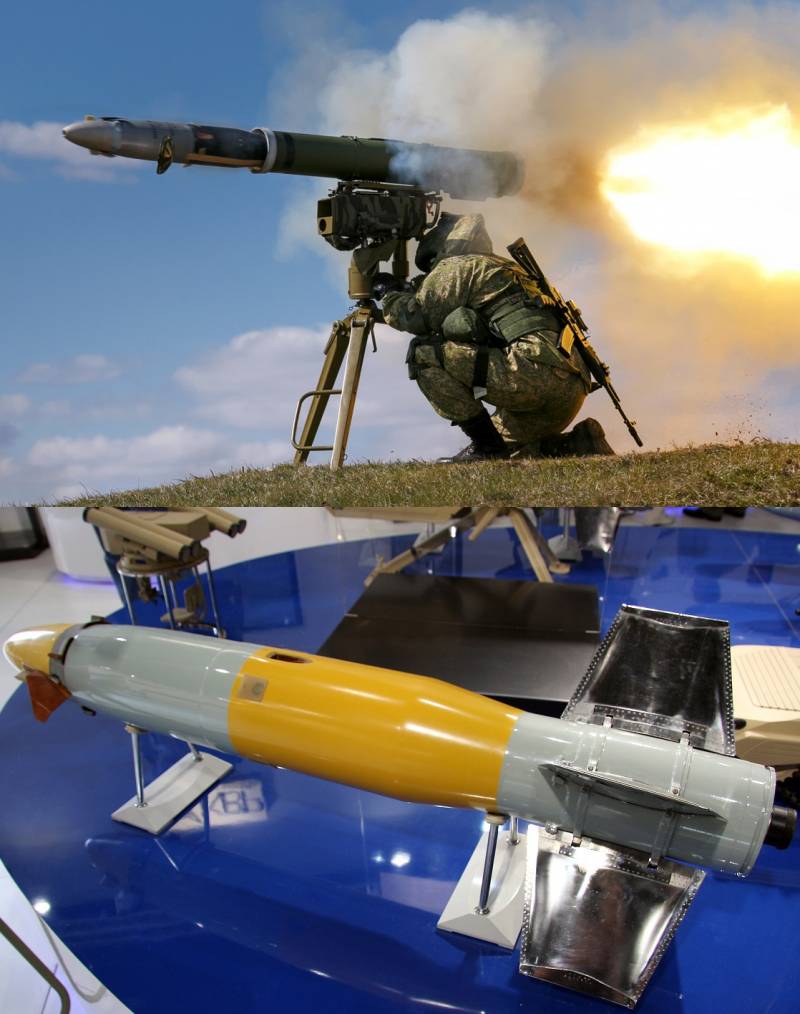 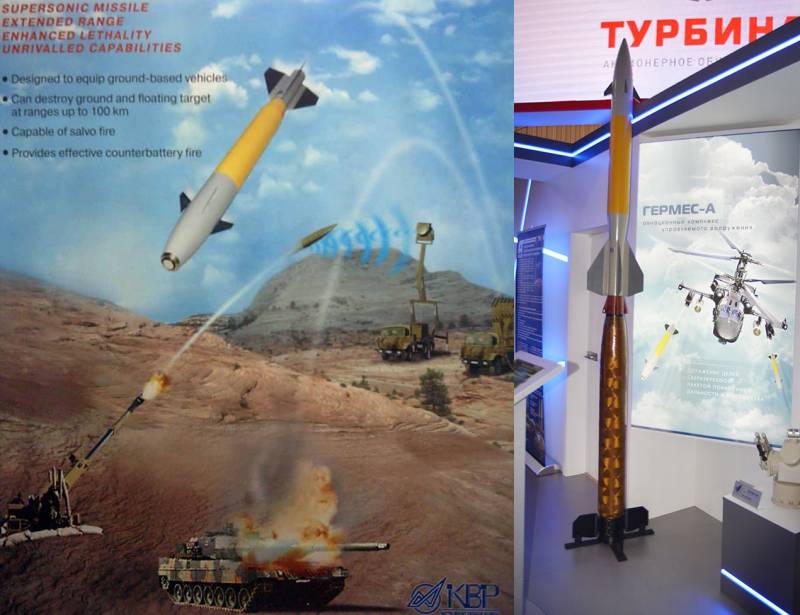 Perspective ATGM "Hermes". Based on the appearance of the prototype models of the ATGM, it can be assumed that it combines the technology of the missiles of the Pantsir anti-aircraft missile-cannon complex (ZPRK) and Krasnopol, on at least one of the missile variants.

Another model of weapons that allows to fire at targets with indirect aiming is mortars. The Israeli armed forces successfully use a 60 mm caliber mortar as part of the Merkava tank armament. The implementation of automated systems based on small-caliber mortars in combination with the capabilities of the UAV for reconnaissance of targets can be an effective solution to combat some types of targets. 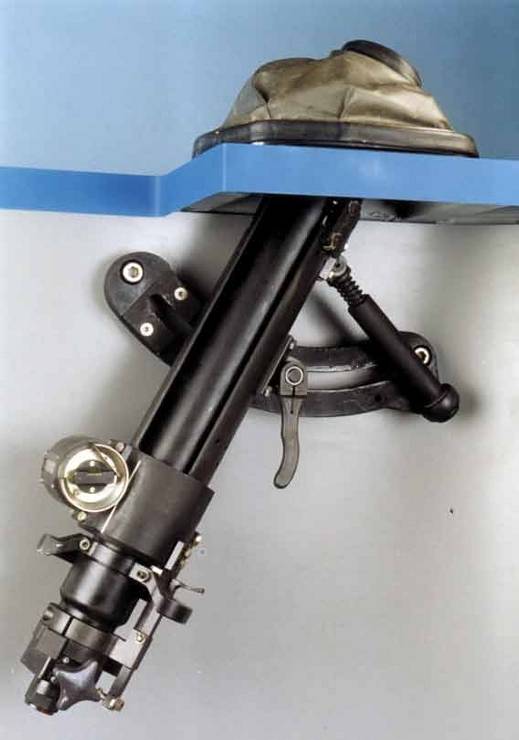 Mortar Soltam caliber 60-mm, placed on the tank "Merkava", is used to fight the enemy, firing from behind shelters

The question arises, is there any point in using long-range weapons on armored vehicles designed to operate at the forefront of hostilities, in particular on tanks? The answer will definitely be positive. The increase in the range of use of weapons occurs simultaneously with the development of means of concealment and the network-centric principles of command and control of armed forces. Under these conditions, threats to armored vehicles can arise in the immediate vicinity, which requires armor, active protection and high reaction speed, and in the distance, which requires the availability of appropriate weapons, allowing you to “reach” remote targets. It should be borne in mind that equipping armored "front edge" long-range weapons should not become an end in itself to the detriment of the main characteristics.

The presence of a UAV integrated into the design of promising armored vehicles and managed by the commander will potentially make it possible to push the boundaries of review by several tens of kilometers, provide an opportunity to conduct reconnaissance of targets in buildings, beyond natural and artificial obstacles, provide the possibility of using weapons with a long range of fire.

In the next article, we will look at various options for the composition and layout of weapons that can be implemented on advanced armored vehicles.