From the very beginning of the development of armored vehicles there was a problem of poor visibility. Requirements for the maximum protection of armored vehicles impose severe restrictions on survey devices. Optical instruments mounted on armored vehicles have limited viewing angles at low pointing speed. This problem concerns both the commander and the gunner, and the driver of the armored vehicle. The author personally had the opportunity to ride a passenger on the BTR-80 and see how the driver in some parts of the route, got out of the hatch, deftly driving the armored wheel with his foot. Using this method of control clearly characterizes the visibility in this armored vehicle. 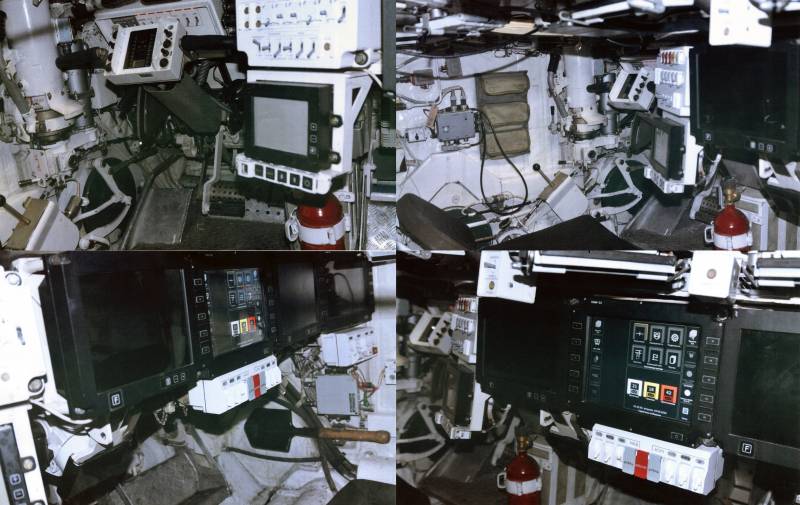 In the 21st century, it became possible to radically improve the capabilities of armored vehicles for orientation in space and search for targets. There were high-resolution video cameras, high-performance night-vision devices, thermal imagers. Nevertheless, there is still some skepticism regarding the radical increase in the capabilities of domestic armored vehicles in terms of surveillance and reconnaissance of targets. To detect targets, it still takes considerable time to turn around the observation devices, followed by pointing weapons on target.

Perhaps there is a shift in the conceptually most advanced T-14 tank on the Armata platform, but there are questions about the capabilities of all-round cameras, the presence of night vision channels, speed, and guidance controls.

A very interesting solution is the IronVision helmet project by the Israeli company Elbit System. Like the helmet of the pilot of the fifth-generation American fighter F-35, the helmet IronVision will allow the crew of armored vehicles to see through the armor. The helmet provides the crew with a high-resolution color image that allows you to distinguish objects both in the vicinity and at a distance from the armored vehicle.


The work of the helmet system Iron Vision

It is necessary to dwell on this technology in more detail. The problem with the implementation of “transparent armor” is that it is not enough to hang the armored car with video cameras and put a helmet on the pilot with displays or projection of the picture into the pilot's eye. You need sophisticated software that can "stitch" information from neighboring cameras in real time and mix, that is, overlay layers of information from different types of sensors. For such complex software, an appropriate computing complex is required.

The total size of the F-35 fighter software source software (software) exceeds 20 million lines, almost half of this software code (8,6 million lines) conducts the most complicated algorithmic processing in real-time mode for pasting all incoming data from sensors into a single picture of the theater of operations.

The onboard supercomputer of the F-35 fighter is capable of performing 40 billion operations per second in continuous mode, thanks to which it provides multitask execution of demanding advanced avionics algorithms, including processing of electro-optical, infrared and radar data. The processed information from the sensors of the aircraft is displayed directly into the pupils of the pilot, taking into account the rotation of the head relative to the body of the aircraft.

In Russia, a new generation of helmets are being developed as part of the creation of the fifth generation fighter Su-57 and the Mi-28HM “Night Hunter” helicopter. 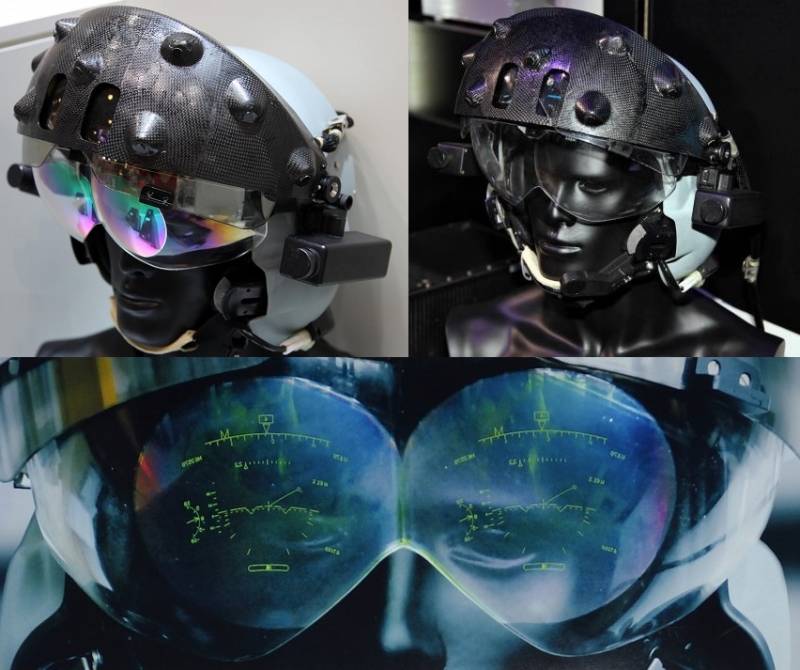 Perspective helmet of the pilot

The main technical characteristics of the pilot pilot helmet:
- the optical system of the helmet-mounted indicator of the binocular type;
- number of video display elements, not less than 1024х768;
- brightness - not less than 2000 cd / m2;
- the range of angular coordinates of the helmet position: in azimuth - from minus 90 to + 90, in elevation - from minus 60 to + 30;
- the frequency of updating the coordinate information is at least 100 Hz;
- the delay in issuing the coordinates of the current measurement is not more than 20 ms;
integral helmet weight - no more than 2 kg.

Based on the available information, we can assume that the technically promising Russian pilot’s helmet is capable of displaying graphical information, but at the same time it is primarily focused on the output of character graphics. Displaying the image from optical and thermal imaging intelligence can be inferior in quality to the image displayed by the F-35 pilot’s helmet, given the complexity that is required to adjust the latter. F-35 pilot helmet fit takes two days for two hours, the display of augmented reality should be located exactly in 2 millimeters from the center of the pupil, each helmet is designed for a specific pilot. The advantage of the Russian approach is most likely the ease of helmet adjustment compared to its American counterpart, and the Russian helmet can most likely be used by any pilot with a minimal setting.

A much more important issue is the ability of the combat vehicle software to provide a seamless “gluing together” of the image coming from the all-round cameras. In this case, the Russian systems are most likely still inferior to the systems of the likely enemy, ensuring that the image is displayed in a helmet only from surveillance devices located in the nose of the aircraft. However, it is possible that work in this direction is already underway in the relevant institutions.

How much is equipment of this type demanded as equipment for armored combat vehicles? Ground combat is much more dynamic than air combat, of course, not from the point of view of the speed of movement of military vehicles, but from the point of view of the sudden appearance of threats. This is facilitated by the difficult terrain, and the presence of green spaces, buildings and structures. And if we want to provide crews with high situational awareness, then aviation technologies must be adapted for use on armored vehicles, and the above example of the IronVision helmet by the Israeli company Elbit System clearly shows that their time has already come.

When using display systems in a helmet, it is necessary to take into account the fact that a person is not an owl, and cannot turn his head at 180 degrees. If we use the image from the sensors located in the nose of the aircraft or helicopter, this is not so critical. But when providing the crew with a circular review, it is necessary to consider various solutions that reduce the need for crew members to twist their heads to maximum angles. For example, compressing an image into a sort of 3D panorama, when turning the head 90 degrees, the image is rotated to 180 degrees. Another option - the presence of quick-change direction buttons - when you press one of them, the center of the image shifts to the top / side / rear hemisphere. The advantage of digital image display systems is that several options for controlling the review can be implemented, and each member of the crew of the armored vehicle can choose the most convenient method for themselves.

The main method of targeting weapons to the target should be the guidance of the eye. In this mode, several control algorithms can be implemented - for example, when a target is detected, the operator seizes it, then a command is given to use weapons, then the CIDA automatically turns around and fires a target. In another scenario, the DUMM performs a turnaround and tracking of the target; the operator for opening the fire is given by the operator additionally.

Theoretically, information from external viewing cameras and other reconnaissance equipment can be displayed on large-format displays in the cockpit of a combat vehicle, in this case, the guidance of weapons will be provided by assault target designation systems (SCS) similar to those used in the cockpits of Su-27, MiG-29 fighters, helicopters Ka-xnumx. But the use of such solutions will be a step back, because the convenience and quality of outputting information on large-format displays will in any case be worse than when displaying a helmet-mounted display, and the failure of large area displays during a fight is more likely than damage to a helmet destroyed most likely only with the head of the carrier.

In the case of using screens as a backup information display tool, guidance can be carried out by specifying a point on the surface of the touch screen, in other words, act according to the principle “point the target with your finger”.

Judging by the latest information, such panels of the Russian industry are quite capable. 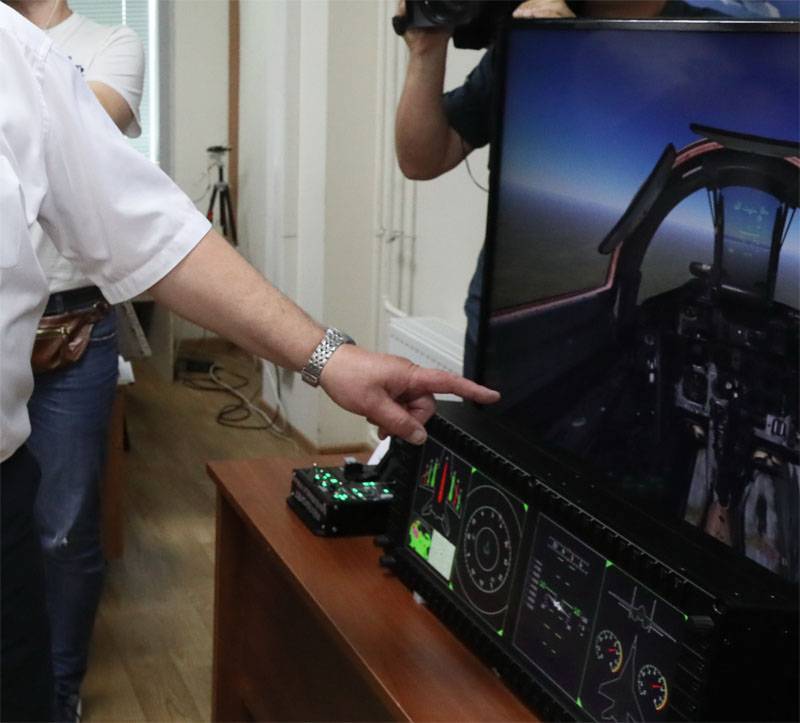 Dashboard Su-57 with the integration of large-format displays.

As mentioned earlier, compared to display systems in a helmet, displaying information on screens can be considered a less promising direction of development. On the example of the development of aircraft instrument panels and helicopters, it can be seen that for some time LCD screens coexisted with mechanical indicators. Later, as they got used to the screens and became convinced of their reliability, they gradually began to refuse mechanical indicators.

A similar process in the future can occur with screens. As helmet technology will be improved with the ability to display images, the process of setting them up will be simplified and automated, a complete abandonment of displays in the cockpit of military equipment is possible. This will optimize the cockpit ergonomics in view of the vacated space. From the point of view of redundancy, it is easier to put a spare helmet in the cab and make a backup line to connect it.

Currently, the technology of reading brain activity is rapidly developing. There is no talk about reading thoughts, first of all these technologies are in demand in the medical field for people with limited mobility. Early experiments implied the introduction of small electrodes into the human brain, but later devices appeared, placed in a special helmet, and allowing control of a prosthesis or even a character in a computer game.

Potentially, such technologies can have a significant impact on the control systems of combat vehicles. For example, when the distance to the observed object is changed, the person refocusing the eyes intuitively, without additional mental or muscular efforts. In a helmet with image output, brain activity recognition technology can be used in conjunction with pupil position tracking technology to instantly change the magnification of guidance devices according to the operator’s “mental” intuitive desire. In the case of using high-speed intelligence guidance drives, the operator will be able to change the field of view as quickly as a person can, simply looking around.

Combination DUMV with high-speed drive drives and modern information display systems in the helmets of the crews of armored vehicles, with the guidance of their weapons, will allow the armored vehicles to acquire previously inaccessible situational awareness and the highest response rate to threats.

In the next article we will talk about the ergonomics of the workplaces of ground combat vehicles and what the tank needs a supercomputer for.