Ergonomics of workplaces and combat algorithms for promising armored vehicles

21 2019 June
31
In previous articles we looked at ways to increase the situational awareness of armored vehicles и the need to increase the speed of targeting weapons and reconnaissance equipment. Equally important is the provision of effective intuitive interaction of crew members with weapons, sensors and other technical systems of combat vehicles.

At the moment, the jobs of the crew members are highly specialized - a separate driver's seat, individual jobs of the commander and gunner. Initially, this was due to the layout of armored vehicles, including a rotating tower and optical observation devices. All crew members had access only to their own controls and surveillance devices, not being able to perform the functions of another crew member.

A similar situation was previously observed in aviation, as an example, we can cite the workplaces of the pilot and navigator-operator of the MiG-31 fighter-interceptor or the Mi-28N combat helicopter. With this arrangement of the workspace, the death or wound of one of the crew members makes the fulfillment of the combat mission impossible, even the process of returning to the base itself became difficult.

Currently, developers are trying to unify crew jobs. This was largely due to the emergence of multifunctional displays, to which any necessary information can be displayed, from any intelligence equipment on board.

Unified pilot and navigator operator jobs were developed as part of the creation of a Boeing / Sikorsky RAH-66 Comanche reconnaissance and attack helicopter. In addition, the pilots of the RAH-66 helicopter should have been able to control most of the functions of the combat vehicle without taking their hands off the controls. In the RAH-66 helicopter, it was planned to install the Kaiser-Electronics helmet-mounted integrated sighting system capable of displaying an infrared (IR) and terrain television image from the front hemisphere viewing systems or a three-dimensional digital map of the terrain on the helmet display, implementing the "eyes outside the cockpit" principle. The presence of the helmet-mounted display allows you to fly a helicopter, and the weapon operator can search for targets without looking at the dashboard.

The RAH-66 helicopter program was closed, but there is no doubt that the achievements obtained during its implementation are used in other programs for the creation of advanced combat vehicles. In Russia, the unified workplaces of the pilot and navigator-operator are implemented in the Mi-28HM combat helicopter based on the experience gained in the creation of the Mi-28UB combat helicopter. Also for the Mi-28HM, a pilot's helmet is being developed with the image displayed on the face shield and our helmet target designation system, which we discussed in the previous article.

The appearance of helmets with the ability to display information, unmanned towers and remotely-controlled weapons modules (DUMV) will allow to unify workplaces in ground combat vehicles. With a high probability, the workplaces of all crew members, including the driver, can be unified in perspective. Modern control systems do not require a mechanical connection between controls and actuators, so a compact steering wheel or even a lateral low-speed control knob — a high-precision joystick — can be used to drive an armored car. 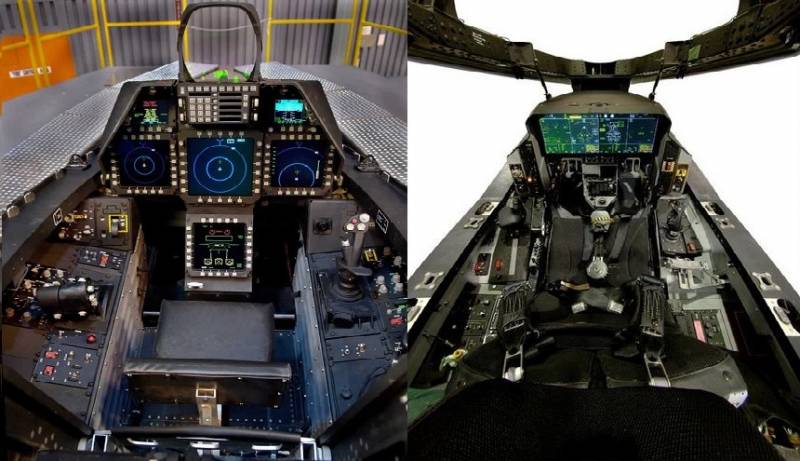 According to unconfirmed reports, the possibility of using a joystick as a replacement for a steering wheel or control levers was considered since 2013 when developing a control system a tank T-90MS. Also, the Kurganets infantry fighting vehicle control panel (BMP) was allegedly made in the image of the Sony Playstation game console gamepad, but it has not been disclosed whether this remote control is designed to control the movement of the BMP, or only to control weapons.

Thus, for controlling the movement of prospective combat vehicles, an option using the side low-speed control knob can be considered, and if this option is found unacceptable, then the steering wheel retracts in an inactive state. By default, the controls of the movement of the combat vehicle must be active with the driver, but if necessary, any crew member should be able to replace him. The main rule in the design of control elements of combat vehicles should be the principle - “hands are always on the controls”.

The unified workplaces of the crew members should be located in an armored capsule, isolated from other compartments of the combat vehicle, as implemented in the Armata project.

The location of the crew in the project "Armata"

Chairs with a variable angle of inclination, fixed on the shock absorbers, should provide a reduction of the effects of vibrations and shaking when driving on rough terrain. In the future, active shock absorbers can be used to eliminate vibrations and shaking. The crew seats may be provided with ventilation integrated with multi-zone climate control.

It may seem that such requirements are redundant, since a tank is not a limousine, but a combat vehicle. But the reality is that the time of armies staffed by untrained recruits is irretrievably gone. The increasing complexity and cost of combat vehicles requires the involvement of their respective professionals, who need to provide a comfortable workplace. Taking into account the cost of armored vehicles, amounting to about five - ten million dollars per unit, the installation of equipment that increases the comfort of the crew will not greatly affect the total amount. In turn, normal working conditions will contribute to increasing the efficiency of the crew’s actions, which do not need to be distracted by domestic discomforts.

One of the most difficult issues of automation is to ensure the effective interaction of man and technology. It is in this area that there can be significant delays in the NORD cycle (Observation, Orientation, Decision, Action) at the stages of "orientation" and "decision". To understand the situation (orientation) and make effective decisions (decision), information for the crew should be displayed in the most accessible and intuitive form. With the increase in computing power of hardware and the advent of software (software) using, among other things, information analysis technologies based on neural networks, some of the tasks of processing intelligence data previously performed by humans can be assigned to software and hardware systems.

For example, when attacking an ATGM, the on-board computer of the armored vehicle can independently analyze the image from the thermal imager and cameras operating in the ultraviolet (UV) range (rocket engine trace), data from the radar, and possibly from acoustic sensors, detect and capture the ATGM launch, select the necessary ammunition and notify the crew of this, after which, the destruction of the ATGM calculation can be made automatically, with one or two teams (reversal of weapons, shot).

The on-board electronics of prospective armored vehicles should be able to independently identify potential targets by their thermal, UV, optical and radar signatures, calculate the trajectory of the movement, rank the targets according to the degree of threat and display information on the screen or helmet in a convenient form. Insufficient or, on the contrary, redundant information may lead to delays in decision making or to the adoption of erroneous decisions at the stages of “orientation” and “decision”.

Detection of a fighter in camouflage in the UV range

An important help in the work of crews of armored vehicles can be mixing information from different sensors, and displayed on the same screen / layer. In other words, information from each surveillance tool placed on an armored vehicle should be used to form a single image that is as comfortable as possible for perception. For example, in the daytime, video from high-resolution color cameras is used as the basis for building the picture. The image from the thermal imager is used as an aid to highlight the warm-contrast elements. Also, additional elements of the image are displayed according to data from the radar or UV cameras. At night, the video image from night vision devices becomes the basis for building the image, which is accordingly complemented by information from other sensors.

Combination of the image received from various industrial sensors

Such technologies are currently used even in smartphones with several cameras, for example, when a black-and-white matrix with a higher photosensitivity is used to improve the quality of the image obtained by a color camera. Apply technology combining images and for industrial purposes. Of course, the ability to view images from each surveillance tool separately should remain as an option.

Under the action of armored vehicles in the group, the output of information can be carried out taking into account the data obtained by the sensors of the neighboring armored vehicles on the principle of "sees one - see everything." Information from all sensors placed on reconnaissance and combat units on the battlefield should be displayed on the upper level, processed and provided to the higher command in a form optimized for each particular level of decision-making, which will ensure highly efficient command and control.

It can be assumed that in advanced combat vehicles the cost of creating software will be a large part of the cost of developing the complex. And it is the software that will largely determine the advantages of one combat vehicle over another.

Displaying images in digital form will allow for the training of armored vehicle crews without the use of specialized simulators, directly in the combat vehicle itself. Of course, such training will not replace full-fledged training with the shooting of real weapons, but it will still significantly simplify the training of crews. Training can be done individually, when the crew of the armored vehicle acts against AI (artificial intelligence - bots in a computer program), or by engaging a large number of different types of combat units within one virtual battlefield. In case of conducting military exercises, the real battlefield can be supplemented with virtual objects, using the augmented reality technology in armored software. 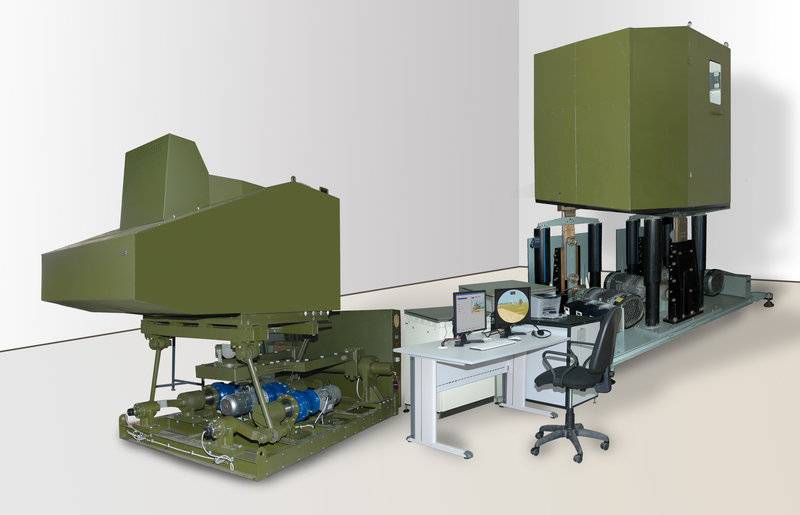 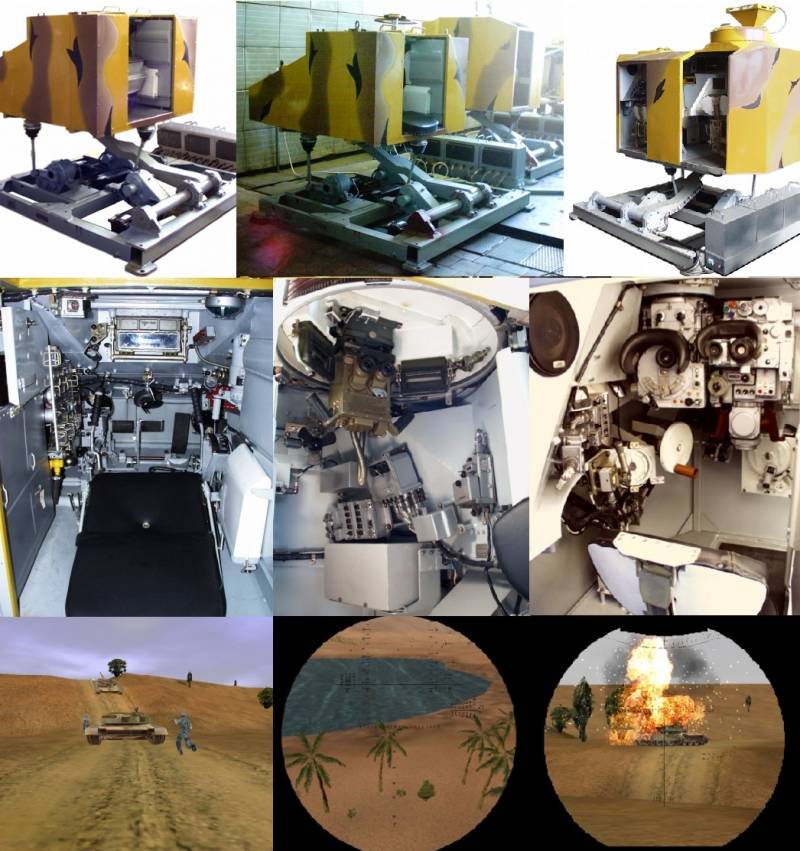 The immense popularity of online combat equipment simulators suggests that training software for advanced armored vehicles, adapted for use on conventional computers, can be used for preliminary training in the form of a game for potential future servicemen. Of course, such software must be amended to ensure the concealment of information constituting state and military secrets.

The use of simulators as a means of increasing the attractiveness of military service is gradually becoming a popular tool in the armed forces of the world. According to some reports, the U.S. Navy used a computer game-simulator of naval battles Harpoon to train officers fleet back at the end of the XNUMXth century. Since then, the possibilities of creating a realistic virtual space have grown many times, while the use of modern combat vehicles often becomes more and more like a computer game, especially when it comes to unmanned (remotely controlled) military equipment.

Crews of prospective armored vehicles will be able to make the right decisions in a complex, dynamically changing environment, and implement them at a significantly higher speed than is possible in existing combat vehicles. This will be facilitated by unified ergonomic workplaces of the crew and the use of intelligent systems for processing and displaying information. The use of armored vehicles as a simulator will save money on the development and procurement of specialized training tools, provide all crews with the opportunity to train at any time in a virtual combat space or during military exercises using augmented reality technology.

It can be assumed that the implementation of the above solutions in terms of improving situational awareness, optimizing the ergonomics of the crew cabs and using high-speed guidance drives will allow you to abandon one of the crew members without losing combat effectiveness, for example, you can combine the position of commander and gunner. However, the commander of the armored vehicle may be assigned some other promising tasks, which we will discuss in the next article.