Armored vehicles against infantry. Who is faster: a tank or an infantryman?

9 2019 June
122
In the first article, we looked at the effectiveness of tank fire support, the Terminator BMPT in the context of the OODA cycle (NORD - observation, orientation, decision, action) by John Boyd. Based on the analysis of the solutions implemented in the design of the support combat vehicle tanks (BMPT) "Terminator-1/2", there is no reason to believe that with its help the task of fire support of tanks against tank dangerous personnel will be solved effectively.


This is primarily due to the fact that the BMPT has the means of reconnaissance and weapons guidance comparable to those used in modern main battle tanks (MBT), infantry fighting vehicles (BMP) and armored personnel carriers (APCs), as a result of which the BMPT will not have advantages in the situational awareness of the crew compared with the crew of the MBT. Secondly, the speed of targeting weapons BMPT on the living force of the enemy is also comparable to the speed of targeting weapons tank or BMP, and much lower than the speed with which the infantryman can carry out targeting anti-tank weapons.

Is it possible to somehow increase the situational awareness of the crews of armored vehicles and the speed of use of weapons? To begin, consider the speed of the guidance and use of weapons, that is, the phase of the “action” of the NORD cycle.

Ammunition speed is limited. When firing from a tank or rapid-fire automatic cannon, the initial velocity of their projectile (750-1000 m / s) is substantially higher than the initial speed of an anti-tank guided missile (ATGM) or a grenade launcher, since the latter need time to accelerate. However, the greater the firing range, the more the velocity of the projectile decreases, while the marching speed of the ATGM (300-600 m / s) may remain unchanged throughout the flight range. An exception is the armor-piercing feathered sub-caliber shells, whose speed (1500-1750 m / s) is significantly higher than the speed of high-explosive fragmentation (RP) shells, but in the context of fighting armored vehicles with manpower, this does not matter.

In the medium, in the possible and in the short term, hypersonic ATGM will appear, sometimes it comes to hypersonic bulletsIn the future, electrothermochemical and electromagnetic (rail) guns may appear (“railgun” on armored vehicles is more likely a distant future). 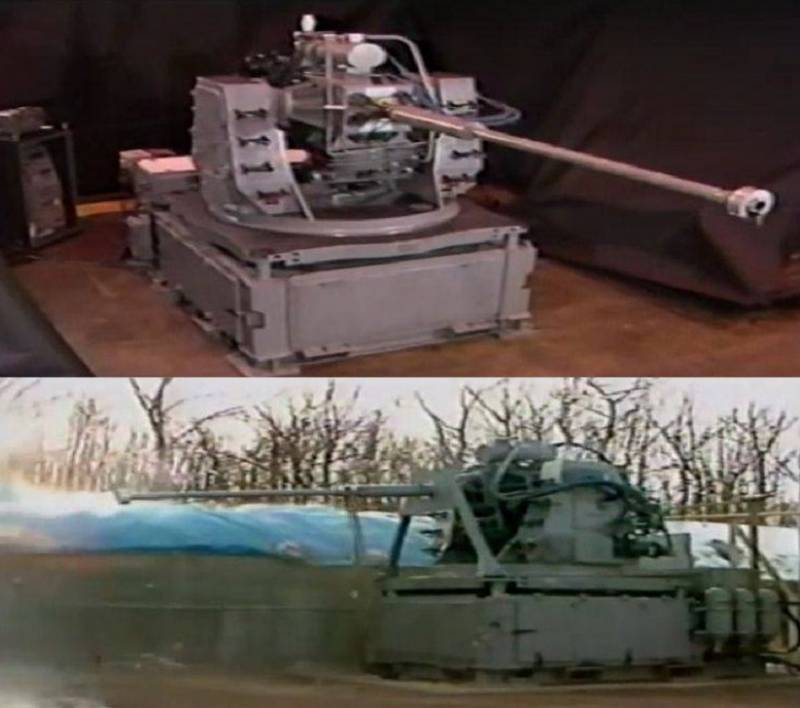 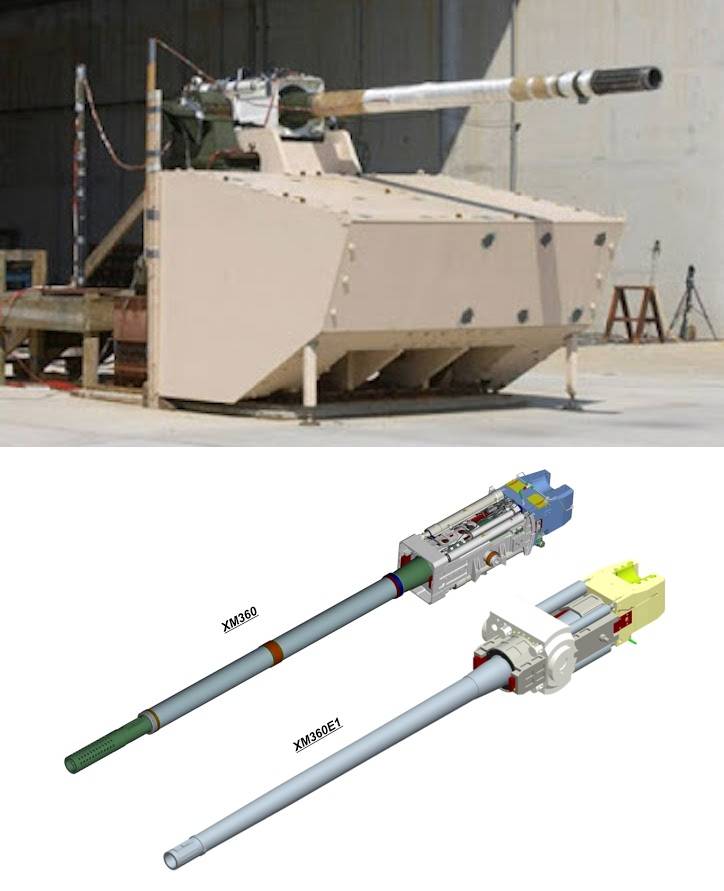 However, the increase in the speed of rockets and shells is unlikely to drastically change the situation in the confrontation of armored vehicles and manpower. Electrothermochemical guns with hypersonic projectiles will appear in armored vehicles, and hypersonic ATGMs in infantry will appear. At present, it can be generally considered that the average flight speed of projectiles and anti-tank missiles / rocket-propelled grenades is comparable, and the advantage of one type of weapon depends on the range of use of specific weapons, and most likely the situation will continue in the future.

However, in the “action” phase, not only the shot itself occurs, but also the weapon targeting process that precedes it.

Thus, based on the characteristics of the pointing devices and the speed at which the weapons of the combat vehicles turn, it can be assumed that the time of the pointing phase of the weapons to the previously detected target (when shifting to 180 degrees) is about 4,5-6 seconds, while the projectile / ATGM / RPG shot speed at a distance of 1 km will be about 1-3 seconds, that is, the speed of aiming and pointing weapons in the "action" phase play a greater role than the speed of the munition (although the speed of the munition is important and its value increases with increasing firing range).

Is it possible to increase the speed of targeting weapons? Existing technologies quite allow to do this. For example, the speed of movement of the axes of a modern industrial robot can exceed 200 degrees / s, ensuring the accuracy of the repetitive movements of 0,02-0,1 mm. At the same time, the length of the “arm” of an industrial robot can reach several meters, and its mass is hundreds of kilograms.


The speed of movement of industrial robots

It is hardly possible to implement similar speeds of turret rotation and pointing guns of a tank of caliber 125-152 mm due to their considerable mass, and as a result of high moments of inertia, but increasing to 180 degrees / s of the speed of turning and pointing weapons of unmanned remote-controlled weapons modules (DUMV) with a cannon caliber 30 mm can be quite real.

High-speed weapon modules with an 30-mm automatic cannon can be installed on both infantry combat vehicles (BMP) or their heavy modifications (TBMP) and on armored personnel carriers (APCs). Due to the current downward trend DUMV with 30-mm automatic guns, such complexes can be placed directly on the OBT turret instead of the 12,7 mm machine gun, drastically increasing its ability to combat tank-dangerous manpower, especially in combination with remote-controlled shells on the trajectory.

The possibility of implementing DUMVs with high-speed pointing drives based on 30-mm automatic cannons can be their advantage compared to larger caliber implements (for example, DUMVs based on 57-mm guns), the achievement of high pointing speeds of which will be limited by an increase in weight and size characteristics. And, of course, the implementation of high-speed targeting is possible only in unmanned combat modules, due to rotational overloads.

Another highly effective means of defeating tank-dangerous manpower can be laser weapon power 5-15 kW. Currently, lasers of such power already exist, but their dimensions are still quite large. It can be expected that in the near future, along with the increase in power of combat lasers, the dimensions of less powerful models will decrease, which will allow them to be placed on armored vehicles as a separate weapon module first, and then as part of the DUMV, combined with an automatic gun and / or machine gun . 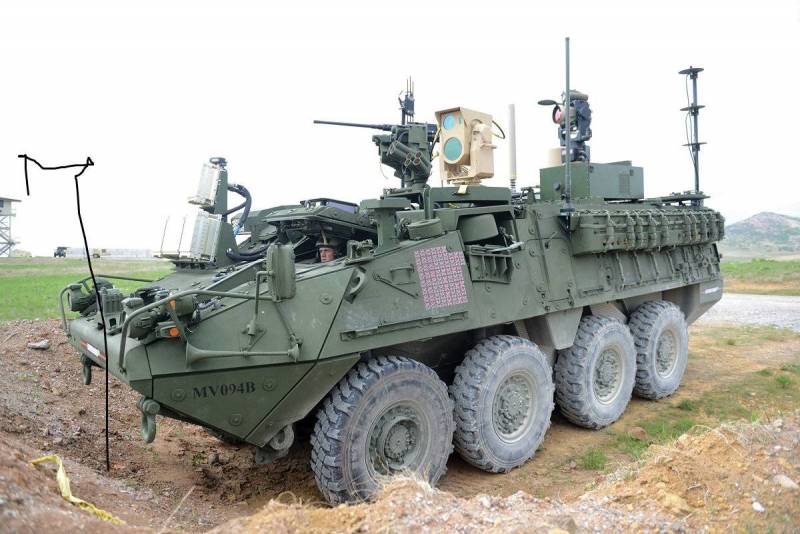 BTR Stryker MEHEL with a laser power 2-5 kW, previously planned to increase power to 18 kW, in 2021, the US Army plans to test on a BTR Stryker laser power 100 kW

To guarantee damage to manpower by a laser, it will be necessary to develop effective guidance algorithms. Modern body armor can be a serious obstacle to the laser beam, so it is necessary that the guidance system automatically defeats the target in the most vulnerable places - the face or neck, just as face recognition occurs in modern digital cameras.

It must be noted here that laser blinding is contrary to the fourth protocol of the Geneva Convention on “inhumane” weapons, but it must be understood that a 5-15 kW laser beam entering an unprotected face or neck is highly likely to cause death. Protecting an infantryman from such a laser is very difficult if you hide it in a closed suit with an exoskeleton and with a helmet with optical isolation, that is, when the image is captured by cameras and displayed on the eye screen or projected into the pupil. Such technologies, even if implemented in the near future, will be of high cost, therefore they will be available to a limited number of military personnel of the world's leading armies. 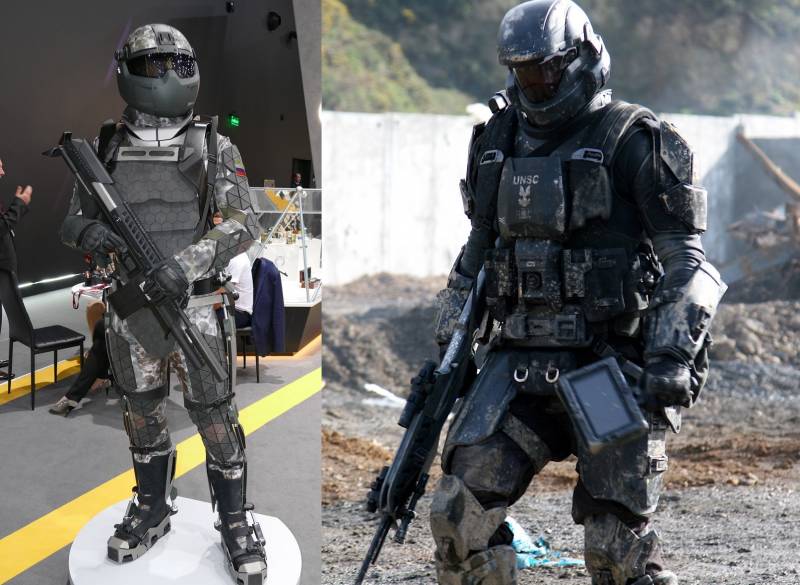 Thus, an increase in the effectiveness of the battle of armored combat vehicles with enemy manpower in the “action” phase can be achieved by installing high-speed weapon guidance drives, and in the future using laser weapons as part of combat modules.

The ability of armored vehicles to direct their weapons at the highest speed inaccessible to humans will in many respects contribute to reducing the threat posed by enemy manpower. The “action” phase, that is, targeting and shooting, is preceded by the “observation”, “orientation” and “decision” phases, the effectiveness of which is directly dependent on the situational awareness of the crews of armored vehicles.

On ways to address the lack of situational awareness of the crews of armored vehicles will discuss in the following material.