April 17 2013
8
In previous articles, we met the main competitors of the AKS74U at the Modern competition, went over the main differences between Ksyusha and the full-sized Kalashnikov machine gun, and, apparently, it’s time to get round this series of articles. I think that the best final will be a brief overview of those samples. weapons, based on the AKS74U, and there are a lot of them. Well, I propose to begin with a silent rifle-grenade launcher complex under the name "Canary".

Frankly, this rifle complex is not a new weapon at all, but the same AKS74U with additional devices installed on it, but nevertheless the weapon turned out to be quite interesting and replaced the “Silence”, standing out for its small dimensions and weight. The Canary is based on the AKS74U without any changes in the weapon itself, however, instead of a flame arrester, a multi-chamber silent-shooting device PBS-4 is installed, which prevents abrupt emission of powder gases into the atmosphere, and, therefore, eliminates this cause of the shot sound. In addition, 5,45x39 cartridges with a subsonic bullet can be used in the weapon, or rather they can not, but should be used, since only with them the firing of the weapon will correspond to the declared characteristics in terms of the sound of a shot. 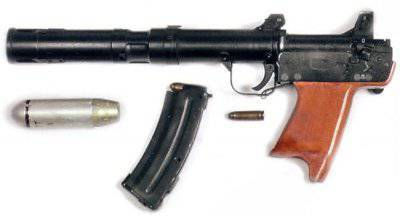 The under-barrel grenade launcher is fired by VOG-T shots, these armor-piercing-incendiary shots can be thrown to a distance of 100-150 meters, with a very favorable set of circumstances, you can throw them over a distance of 300 meters. This is the only combat version of the ammunition for this grenade launcher. In addition to him, there is also a training shot, which, in fact, is just an ordinary blank. The shots are stabilized in flight by rotation, while the movement along the barrel rifts is carried out along the already prepared grooves on the grenade launcher.

In addition to the silent cannon and grenade launcher complex "Canary" (after all, we know how to give names to weapons), there is another version of the AKS74U, which is designed for firing in low light conditions. This version of the weapon has the designation AX74UN2, and the machine gun itself is no different from the original, except the seat for the NSPUM night sight, therefore we will not dwell on this version of the weapon. 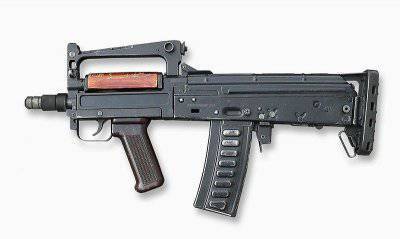 Much more interesting variant of the development of AKS74U is the automaton in the bullpup layout, namely the well-known “Thunderstorm”, which, although it has almost a complete external difference from the progenitor, but many common features are clearly visible. It is noteworthy that in this case the cartridge 5,45х39 was rejected, preferring 7,62x39 (Thunderstorm-1) and 9x39 (Thunderstorm-4) and the last version of the weapon has a barrel the entire length of 240 millimeters and this is despite the layout of the bull-papa weapon.

But you won't be fed up with some machine guns, AKS74U became the basis for many submachine guns, including "Bison", respectively, "Vityaz", "Tiss" and, I think, this is not the final, and AX74U in one form or another will be used as the basis for a new weapon.

This finally completes the series of articles about Ksyusha.

Ctrl Enter
Noticed oshЫbku Highlight text and press. Ctrl + Enter
We are
AKS74U - to whom "Ksyusha", and to whom ... TKB-0116 main competitor (part-2)AKS74U - to whom "Ksyusha", and to whom ... Competition "Modern" (part-1)
Military Reviewin Yandex News
Military Reviewin Google News
8 comments
Information
Dear reader, to leave comments on the publication, you must to register.