April 16 2013
30
In previous articles about the AKS74U machine you can get acquainted with its main competitors presented at the Modern contest, as well as with the reasons for creating the machine in very compact dimensions. Almost all samples weapons could become an excellent means of delivering lead to the body of the enemy, if not for one “but”, which consisted in the widest distribution of the Kalashnikov machine gun. Actually, the presence of a full-fledged version of the AK in service was the decisive factor in choosing the winner in the Modern contest, because production was established just under the AK, plus some unification of weapons, it only remained to reduce the size and weight of the weapon to the required ones, but it turned out so simple. 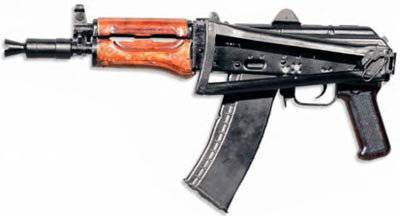 On the one hand, upgrading an already finished sample is an incomparably simpler task than creating weapons from scratch, but adjusting an existing sample to specific requirements, as it turned out, is not always as simple as it seems, and just drunk the barrel with an automatic, so that it becomes shorter, is not the best option. In order to get a sample of weapons, even being close to the requirements of the Modern competition, many problems had to be solved, and although AKS74U fundamentally does not differ from its full-size progenitor, many details are changed in its design in order to ensure the normal operation of the machine gun and reduce its size.

Naturally, the barrel of the weapon was shortened to 255 millimeters in the first place. This step led to the fact that the powder charge of the cartridge 5,45x39 did not have time to completely burn through with all the ensuing consequences. In order for this phenomenon to at least partially compensate, a modular device in the form of a volumetric cylinder was developed. The gas chamber had to be carried back, which required a reduction in the length of the piston rod. In addition, the sample submitted to the competition was also distinguished by sights. So, the rear sight was replaced with a simple reclining, and the butt of the arms was folded up. I repeat once again that this was the first version of the weapon, and not the AKS74U in the final version. Then came the long process of improving these weapons. So, it was decided to trim the barrel with another millimeter 35, butt was replaced with AKMS stock, but the most difficult work was done with the flue unit and the constriction device. In the end, they came to the result that everyone knows, with an even shorter barrel length of 206,5 millimeters. It seems that everything is simple and fast in words, and there is nothing complicated, but if you try to repeat it all, recalculate every detail, and even think up new ones, the result will be quite serious work, maybe not equal to creating a new small-sized automaton. ” from scratch, but very close to that. 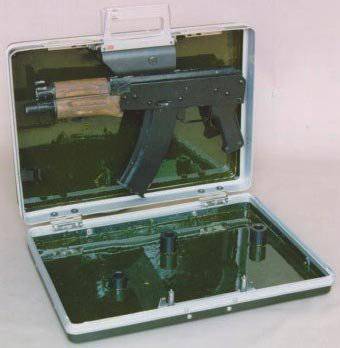 Unfortunately, it was not possible to adjust the weapon fully to the requirements of the competition. The reason for this is not that it was impossible to do this, but when reducing the machine to the required dimensions, interchangeability with the full-sized version of the Kalashnikov machine of most parts would be completely lost, and this would mean high costs in production. Therefore, the length of the weapon with the folded butt is not equal to 450 millimeters, but 490 millimeters, but with the butt spread out, the length of the weapon is 20 millimeters less than the required one - 730 millimeters. The weight of the weapon is also significantly exceeded by 285 grams (2,485 kilograms without a magazine). Due to the changes associated with a decrease in the length of the piston rod and other factors, the rate of fire of the weapon increased to 700 rounds per minute. In addition, the barrels of weapons differ not only in their length, but also in the groove pitch. In the shortened version of the machine, the groove pitch in the barrel is equal to 160 millimeters, while in the full-length groove pitch is equal to 200 millimeters. This was done to ensure that the bullet after taking off from the barrel better stabilized in flight. It should also be noted that a smaller rifling step significantly increases the voltage on the bullet shell, and when the barrel is overheated, which is itself a very, very bad phenomenon, this resistance on the bullet shell manifests itself, becoming one of the reasons for “spitting” the weapon. In general, on the one hand, the AK seems to be the same, but already a bit different.

It is noteworthy that the airborne troops received the first shortened version of the Kalashnikov assault rifle, although it seems that this weapon was created more as a self-defense weapon for those who only need the rifle in an extreme case and are not the main means of influencing the enemy. Naturally, there AKS74U did not get accustomed and did not become the main weapon in view of its specific features. Although it should be noted flattering reviews about the small weight and dimensions of the weapon, which was quite important in this case. But neither weight nor dimensions could compensate for the low accuracy of firing and a small effective range of use. Nevertheless, the weapon was the most widespread, which could get, and not even where necessary (police, police, although sometimes they need this weapon, but obviously not in the same amount as it is now and not universally distributed). Having a fairly widespread distribution, the AKS74U machine gun was not only used in its original form, but also received a kind of development. On the basis of this assault rifle a rifle-and-grenade launcher complex was created, but this weapon is already in another article.