April 10 2013
10
In the previous article, we began to consider the basic models of small-sized automata that competed with AKS74U at the Modern competition. Three models were considered. weaponswhich could really contend with the shortened version of the Kalashnikov, but this is far from all the weapons of the modernist competition. Even if one runs “at a gallop across Europe” and does not dismantle all the weapons of this competition, then at least one more model of a small-sized machine gun, namely, the weapon proposed by Igor Yakovlevich Stechkin, should be considered.

This compact machine is not much different from many others in its appearance, but this weapon has its own peculiarity, which is enclosed in stories creation, and most importantly in the design of the machine. Igor Yakovlevich, when designing his small-sized machine gun, in order for him to satisfy the requirements set before the designers, he went by a somewhat different method than his colleagues. The designer understood that it was much easier to upgrade than to do it “from scratch”, because at first a version of the weapon was created that significantly exceeded the specified limits in terms of dimensions and weight. Then this weapon was brought to failure-free operation, and only after that the process of reducing the size and weight was started. It should be immediately noted that the path chosen by the gunsmith was somewhat erroneous, since too often it is precisely the reduction of the details of the weapon that seriously affect its reliability and performance. Nevertheless, the designer managed to closely approach the specified parameters.

The length of the machine TKB-0116 is 458 millimeters with a folded butt (8 millimeters more than the required), with the butt spread out, the length is equal to 743 millimeters (7 millimeters less than the required limit). The weight of the weapon was 2,31 kilogram, which is 0,11 kilogram more than the weight specified by the conditions of the competition. The weapons were fed from detachable box magazines with a capacity of 20 and 30 cartridges, while the machine’s rate of fire was 850 shots per minute, which can be considered a negative quality, since the rate of fire differs from the usual 600 shots per minute, which means you had to get used to the weapon. 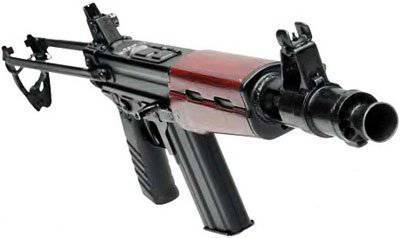 Weapon automatics are built according to a completely unusual pattern for machine guns, namely the use of recoil energy in the short course of the barrel. Naturally, despite the designation of the same name, this scheme of automation differs from automatic pistols, where such a system is used quite widely. Automatic weapons worked as follows. When fired, the powder gases pressed on the bottom of the sleeve, trying to push it out of the chamber, but since the sleeve itself was reliably supported by the bolt, the bullet did not leave the barrel. However, the momentum that the bullet received from the powder gases was sufficient to move the bolt coupled to the barrel. Moving back, the barrel of the weapon turned around its axis, thus leaving the clutch with the bolt, freeing from it, the barrel stopped, but he did it not only when hitting the receiver, but when it passed through the levers to the remaining speed. The shutter, which received additional acceleration, removed the cartridge case, threw it through the window to eject the cartridge cases from above the weapon, and under the action of the return spring moved in the opposite direction. When moving forward, the bolt picked up a new cartridge from the magazine, inserted it into the chamber and rested against the barrel of the weapon, forcing it to move forward, which caused the barrel to turn, and therefore its engagement with the bolt. With the next shot, everything was repeated anew.

The appearance of the machine is quite ordinary and does not give out its design, except that the window for ejection of spent cartridges looks very interesting. On the right side of the weapon located switch fuse and modes of operation of the machine, as well as the shutter handle. The forearm of the weapon is wooden, not plastic. Sights open, consist of a pillar and front sight. Butt, folding up, not interfering with the retention or aiming in the folded position. In general, everything is quite ordinary.

On tests, this machine showed a much better grouping of fire than the future Ksyusha, a reduced sound of the shot was noted separately, thanks to a rather tricky muzzle device that was both a flame arrester and a DTC and an accelerator for the barrel and a little bit PBS as it turned out. Despite this, the weapon could not boast of a long survivability of mechanisms, which was the official reason for the loss. Apparently, Igor Yakovlevich tritely did not have enough time to finalize his sample to the ideal, well, after the competition no one was interested in these weapons, and therefore it was pointless to work with him. 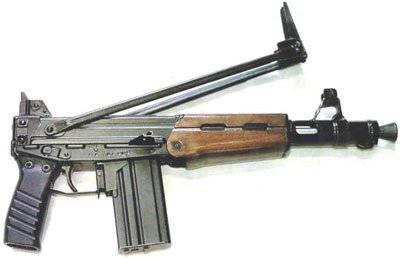 I think it is clear why it was this sample that I decided to single out in a separate article, rather than crumpling everything together. In addition to the 4 weapons models described, other automata took part in the competition, but we will not be distracted by the Modern competition, we will manage only the main competitors of Kalashnikov, all the same articles about Ksyusha and proceed directly to meeting the winner of the competition. And this weapon is far from the most idle time and I’m sure it will be interesting to read something about it, starting from what monsters the machine turned into by means of a small factory tuning and ending with the fact that this model participated in the competition as PP-1. But this is all in the following articles.

Ctrl Enter
Noticed a mistake Highlight text and press. Ctrl + Enter
We are
AKS74U - to whom "Ksyusha", and to whom ... Competition "Modern" (part-1)Small-sized automata (Article I): MA Dragunova, AO-46 Tkacheva, TKB-0116 Stechkina
10 comments
Information
Dear reader, to leave comments on the publication, you must to register.