Vyborg is ours. Moscow treaty that saved Leningrad 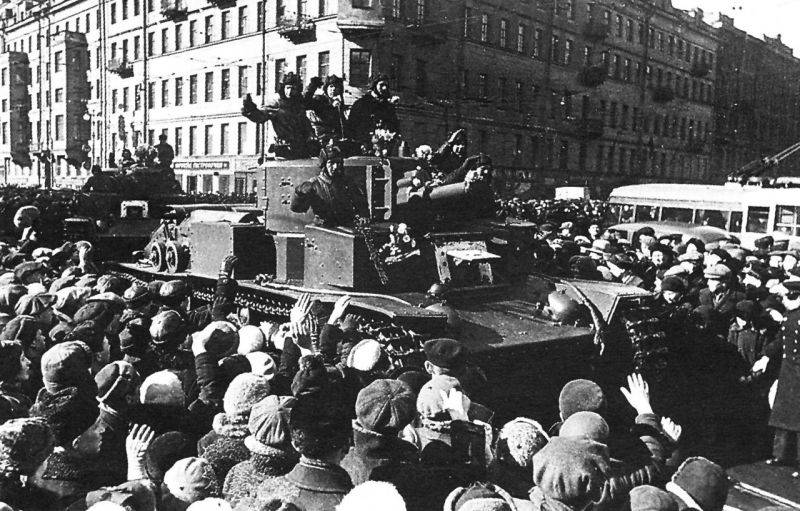 80 years ago, on March 12, 1940, the Moscow Peace Treaty was signed, which ended the Soviet-Finnish War of 1939–1940. Russia returned part of Karelia and Vyborg, lost as a result of the collapse of the Russian Empire. Stalin decided to strengthen the defense of the northern capital - Leningrad.

Moscow's attempts to stop the war with Finland

Throughout the Winter War, Moscow made efforts to reason Helsinki and resolve the conflict peacefully. The Stalinist government reacted positively to the first peaceful probe launched by the Finnish government through the writer H. Vuolioki. On January 8, 1940, she had a conversation with the Soviet Plenipotentiary in Stockholm, A. M. Kollontai, about the beginning of peace negotiations with a view to resolving the Soviet-Finnish conflict.

Moscow accepted Sweden’s offer, expressing a desire to accept the role of mediator in order to facilitate an unofficial Soviet-Finnish exchange of views on the peace agreement. On January 29, 1940, a statement was sent to the Swedish Foreign Minister H.E. Gunther, stating that the Soviet Union, in principle, does not object to concluding peace with Helsinki, but wants to know what concessions the Finns are ready to begin.

However, unofficial Soviet-Finnish contacts were complicated by the policies of England and France. Western democracies at this time did everything to drag out the Soviet-Finnish war. London and Paris decided to attack the USSR (How the West was preparing a "crusade" against the USSR) Finland was actively supplied weapons and ammunition. Finns also supplied arms and ammunition to the United States. The Americans helped Helsinki and financially, providing a loan for the purchase of weapons. In Scandinavia, the Anglo-French expeditionary forces were preparing to land for assistance from the Finnish army. Also, Westerners were preparing an attack on the USSR in the Caucasus (a blow to the oil fields). On the southern flank, the West planned to draw Turkey into the war with the USSR.

In addition, the Finnish army has not yet been defeated. The war seemed to drag out. In these conditions, Helsinki was in no hurry with the start of peace talks. On the contrary, the Finns were looking for an opportunity to continue the war. Finnish Foreign Minister Tanner visited Stockholm three times in February 1940 and asked Sweden to send 30 volunteers for help. body. Sweden has already provided Finland with all kinds of military assistance, and supplied arms and ammunition. It did not stop thousands of volunteers from fighting on the side of Finland. The issue of the passage of the Anglo-French troops through Sweden to Finland was also decided. Therefore, the Finnish government of Ryuti took time and invited Moscow to communicate the Soviet conditions of the world.

Moscow perfectly understood the game of Helsinki. The Soviet side again took the initiative and communicated its peaceful conditions through Kollontai on February 23, 1940. At the same time, Moscow turned to the British government with a request to transfer these conditions to the Finns and take on the role of mediator in the establishment of Soviet-Finnish negotiations. The Soviet government thus tried to neutralize the British efforts to prolong the war. On February 24, London refused to take on the role of mediator.

The meeting of the Red Army units, who returned from the Karelian Isthmus, at the Kirov bridge (currently the Trinity bridge) in Leningrad. March 30, 1940

Meanwhile, the situation on the Soviet-Finnish front has fundamentally changed. The Red Army in February 1940 broke through the main strip of the Mannerheim Line. The Finnish army was defeated and could no longer offer serious resistance. On March 4, the Commander-in-Chief of the Finnish Army Mannerheim reported to the government that the troops in the Karelian direction were in a critical situation. Helsinki, deprived of the opportunity to continue to drag out the war and wait for help from England and France, expressed his readiness to enter into peace talks.

The government of Ryti informed Kollontai that, in principle, it accepts the conditions of the USSR, considering them as the basis for negotiations. However, under pressure from London and Paris, the Finnish government instead of sending a delegation to Moscow for negotiations on March 4 asked Moscow to clarify the passage of the new Soviet-Finnish border and the amount of compensation that Finland could receive from the USSR for the ceded territories. On March 6, the Soviet government again invited Helsinki to send a delegation for peace talks. This time, Finland agreed and sent a delegation led by Ryti. The first official meeting of the Soviet and Finnish delegations on the conclusion of a peace treaty was held on March 7, 1940. After listening to Soviet proposals, the Finnish side asked for time to consult with Helsinki.

Meanwhile, the West again made clear to Helsinki that it was ready to support Finland. The head of the British government, Chamberlain, speaking in parliament, said that England and France would continue to support Finland. London and Paris reminded Helsinki that if Helsinki wished, the Anglo-French expeditionary forces would be immediately dispatched, Norway and Sweden would not be asked again. However, the problem was that the Finns could no longer conduct military operations. The martial law of Finland demanded immediate peace. 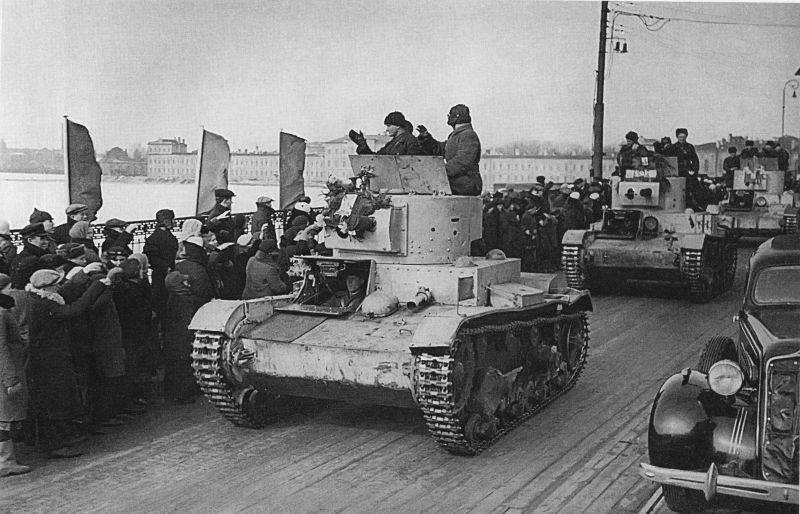 Leningraders on Liteiny Bridge meet a column of OT-130 tanks (a flamethrower tank based on the T-26 tank) that have returned from the Karelian Isthmus. March 30, 1940 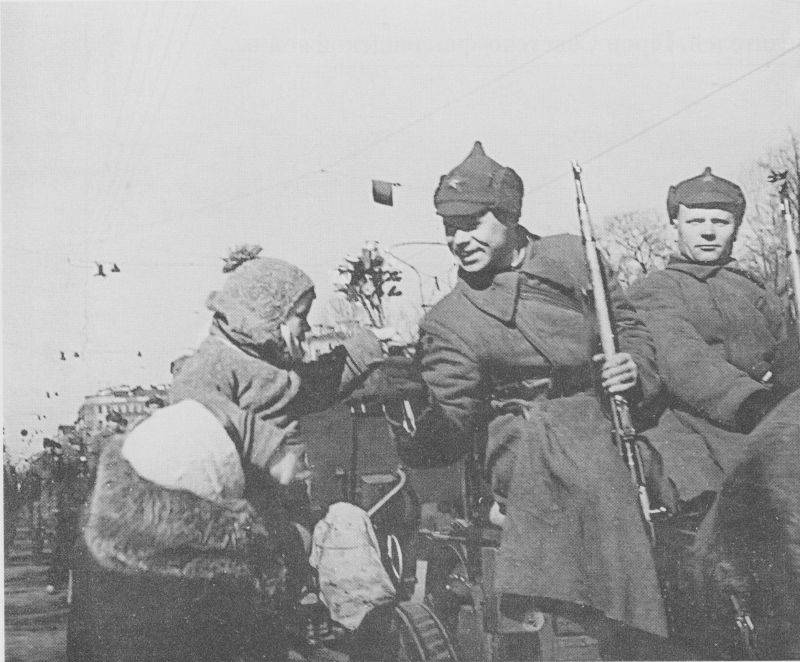 The negotiations ended on March 12, 1940 with the conclusion of a peace treaty between the USSR and Finland. It was signed by the Chairman of the Government (SNK) Vyacheslav Molotov from the Soviet state, Andrei Zhdanov, member of the Presidium of the Supreme Soviet of the USSR, and Alexander Vasilevsky, representative of the General Staff. The agreement was signed by Finland: Prime Minister Risto Ryti, Minister Juho Paasikivi, General Headquarters Karl Walden, Member of the Foreign Policy Committee of the Parliament V. Vojonmaa.

According to the Moscow Treaty, the Karelian Isthmus with Vyborg and Vyborg Bay passed to the Soviet Union; a number of islands in the Gulf of Finland; the western and northern shores of Lake Ladoga with the cities of Kexholm, Sortavala, Suoyarvi, as a result, the entire lake was completely within the borders of the USSR; part of the Finnish territory with the city of Kuolajärvi, part of the Rybachy and Sredny peninsulas. Moscow leased part of the Hanko Peninsula (Gangut) with adjoining islands for a period of 30 years (annual rent was 8 million marks) to create a naval base on it that protects the entrance to the Gulf of Finland. Finland pledged not to contain armed vessels with a displacement of more than 400 tons in the Barents Sea and to have no more than 15 armed vessels there for defense. The Finns were forbidden to have a submarine fleet and a military in the North Aviation. Also, Finland could not create military and naval bases and other military installations in the North. Both parties undertook to refrain from attacking each other, not to enter into alliances and not to join coalitions directed against one of the contracting parties. True, the Finns soon violated this point, becoming allies of Nazi Germany.

In the economic part of the Soviet Russia agreement, the right of free transit through the Petsamo region (Pechenga) to Norway and vice versa was granted. At the same time, freights were exempted from customs control and were not taxed. Soviet citizens and planes had the right of free passage and passage through Petsamo to Norway. Finland granted the Soviet side the right to transit goods to Sweden. In order to create the shortest railway route for transit from Russia to Sweden, Moscow and Helsinki pledged to build a part of the railway, each on its own territory, to connect the Soviet city of Kandalaksha with the Finnish city of Kemijärvi. They planned to build the road in 1940.

Additionally, on October 11, 1940, an agreement on the Åland Islands was signed between the USSR and Finland in Moscow. The Finnish side undertook to demilitarize the Åland Islands, not to build fortifications there and not to provide them for the military forces of other countries. Moscow received the right to maintain its consulate on the Åland Islands to verify compliance with the agreement.

Thus, the Stalinist government, in anticipation of the war with the Reich, decided to increase the defense capability of Leningrad, the second capital of the USSR, the country's largest industrial and cultural center. It is possible that it was the transfer of the border from Leningrad that saved the city from its capture by the Nazis and Finns during the Great Patriotic War. Moscow returned the lands of Karelia and Vyborg, which belonged to the Russian Empire and transferred to the Grand Duchy of Finland, when it was part of the Russian state. The Soviet Union secured the only railway to Murmansk. The Gulf of Finland was actually turning into the inland sea of ​​our state.

The war showed Stalin the real state of affairs in the army and aviation, their readiness for military operations with a serious enemy. The armed forces, despite all the successes in improving the country's defense capabilities in recent years, were still “raw”. It took a lot of work on the bugs.

The victory in the war with Finland strengthened the position of the USSR in Eastern Europe. Small border states, previously hostile to the USSR, were forced to moderate their ambitions and make concessions. So, in the summer of 1940, Russia without war returned to its Baltic countries - Estonia, Latvia and Lithuania. Also in the summer of 1940, Moscow without war returned Bessarabia and Northern Bukovina to the USSR. Romania had to give in. 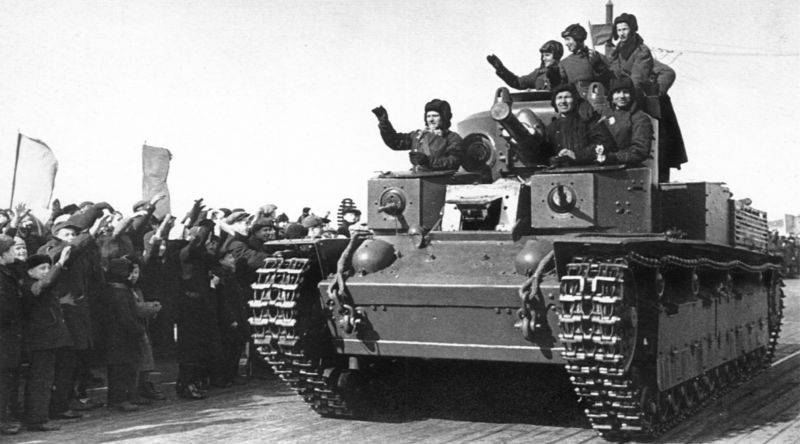 Residents of Leningrad welcome tankers of the 20th heavy tank brigade returning from the Karelian Isthmus to the place of permanent deployment. Pictured is a 1938 release car. April 1940

We are in Yandex Zen
Karelian-Finnish SSR
Stalin and Finland
120 comments
Information
Dear reader, to leave comments on the publication, you must to register.