How the Red Army broke into the Mannerheim Line 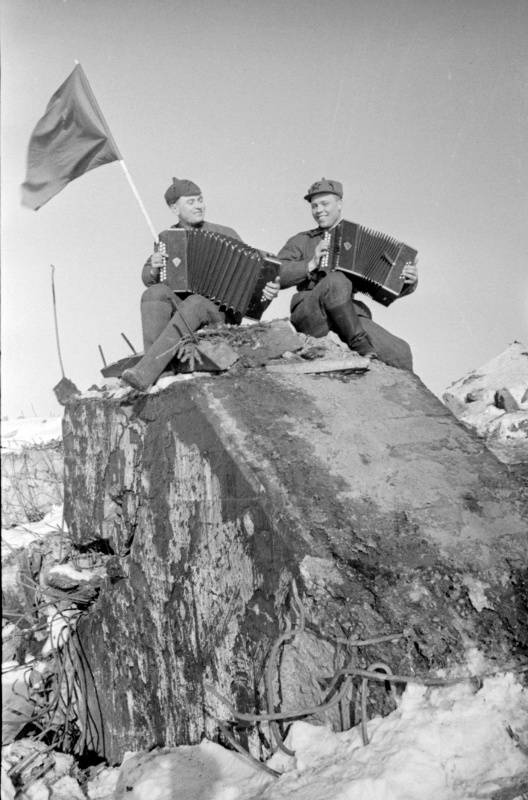 Two fighters of the Red Army with accordions on an exploded Finnish bunker in the Summa-Khotinen area. 1940

Winter war 80 years ago, on February 11, 1940, troops of the North-Western Front under the command of S. K. Timoshenko began a breakthrough of the Mannerheim Line. Finnish concrete fortifications were destroyed by heavy artillery, explosives, flamethrowers and aerial bombs.

The Red Army failed to break through the Finnish army’s defense line the first time. At the same time, the beginning of the war against Finland was chosen by the supreme Soviet command correctly. The area in the Finnish direction was distinguished by numerous rivers, streams, lakes, swamps. In December, the soil was captured by frosts, numerous reservoirs froze. But there was still little snow. That is, the Red Army could use its advantage in mechanization.

The Red Army could well break through the Mannerheim Line. The Finnish line of defense was far from perfect. Most of the long-term structures were single-story, partially buried in the ground with reinforced concrete structures in the form of a bunker, which was divided into several rooms. Three pillboxes of the "millionth" type had two levels, another three - three levels. The Finns did not have the usual underground galleries for France, Germany and Czechoslovakia that connected the bunkers. There were no underground narrow gauge railways. The Mannerheim Line, in comparison with other similar lines of defense, had a lower density of bunkers per 1 kilometer, inferior to the number of artillery bunkers. Finnish artillery bunkers had no guns that could hit any Soviet tank of that time. That is, the "Mannerheim Line" was not "impregnable."

The main problem of the Red Army was the lack of intelligence on Finnish fortifications. There was only fragmentary data about the Mannerheim Line. As Marshal Shaposhnikov noted: "For us, such a depth of defense was a well-known surprise." In particular, there was no information about the late fortifications of 1938–1939. Another important factor of failure is the balance of power in the initial period of the war. Hacking the Finnish defense required decisive superiority in forces and means, but it was not there. The head of the General Staff of the Red Army, Tymoshenko wrote that intelligence reported that the Finns would have up to 10 infantry divisions and 15 separate battalions. In reality, the Finns deployed much more; before the start of the war they generally planned to advance. The Finns deployed 16 divisions and a significant number of individual battalions. We started the war with 21 divisions. Thus, the Red Army had no decisive advantage at the beginning of the war. Already during the war we brought forces on the Finnish front to 45 divisions and ended the war with 58 divisions.

In December 1939, only five Soviet divisions of the 7th Army were sent to three enemy divisions in long-term fortifications on the Karelian Isthmus. And the standard ratio of forces advancing and defending in the direction of the main strike is 1: 3. Later the ratio became 6: 9, which is also far from the norm. In terms of the number of battalions and troops, the picture is still obvious: 80 calculated Finnish battalions versus 84 Soviet; 130 thousand Finns against 139 thousand Soviet soldiers. It is clear that the Red Army had a strong advantage in armored vehicles, aviation and artillery. But the infantry is not in vain "the queen of the fields." In addition, Soviet divisions were not brought into battle all at once. As a result, the forces of the parties on the Karelian Isthmus were approximately the same, but the Finns sat in long-term fortifications. But the Red Army did not have complete information about the pillboxes, and experience in their assault. Hence the corresponding result.

The picture in secondary directions, for example, between the Ladoga and Onega lakes, was similar. Here attacked five divisions of the 8th army. These are 43 calculated battalions. On the Finnish side, two infantry divisions and a network of separate battalions were defending — 25 battalions. That is, the ratio of forces is 1: 3 and not close. The same balance of power was between the Finnish army and the Soviet troops allocated for the offensive. The Finns had 170 military battalions, the Red Army - 185 military battalions. Obviously, the Soviet high command underestimated the enemy and did not provide decisive superiority of forces at the beginning of the war. Errors corrected already during the war. 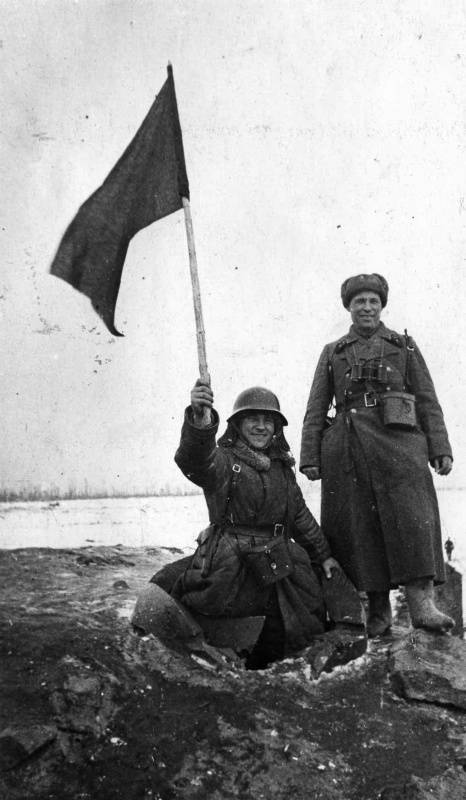 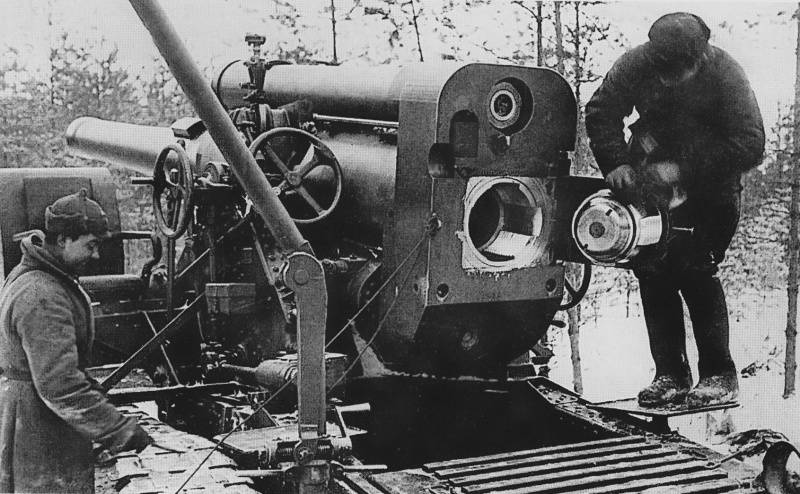 Red Army soldiers cleaning the 203-mm howitzer B-4 on the Karelian Isthmus. February 1940 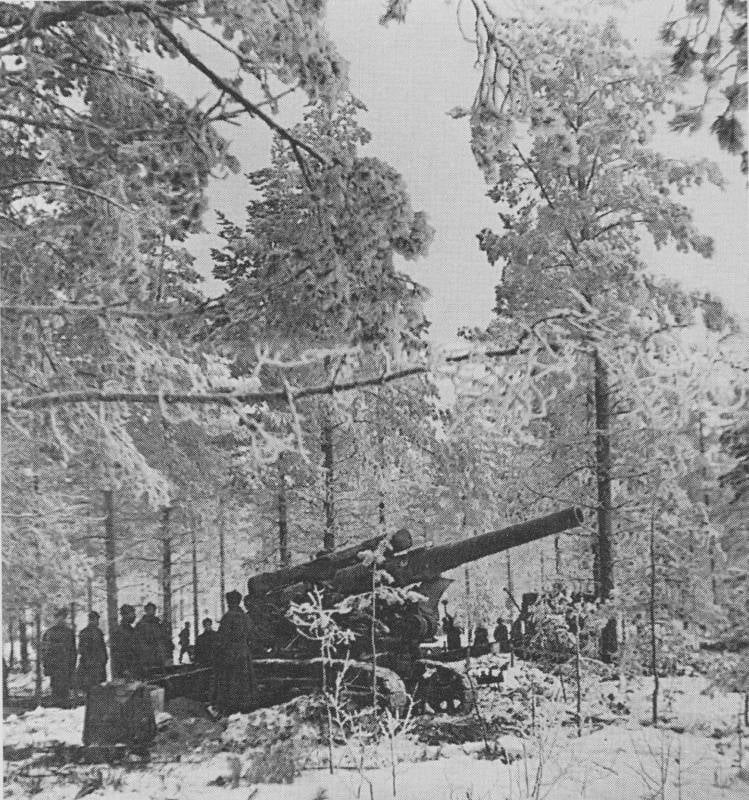 Soviet 203-mm howitzer B-4 at a firing position on the Karelian Isthmus. February 1940

Storm on all the rules

After it became obvious that the Finnish defense could not be broken right away, the Red Army had strong fortifications and the Finnish military-political leadership under arms all who it could put, and even attracted foreign volunteers (there was also the prospect of the British and French arriving at the front ), it was decided to storm the "Mannerheim Line" according to all the rules of military art. The troops in the Karelian direction have significantly strengthened. From the troops of the right wing of the 7th Army, a new 13th Army was formed. The 7th Army was brought up to 12 divisions, the 11th Army - 9 divisions, 2 divisions were in reserve front, 3 divisions - in reserve Headquarters. Increased artillery.

As a result, the correlation of forces compared with December 1939 to February 12, 1940 began to comply with the standard 1: 3. The Red Army now numbered 460 thousand people against 150 thousand Finns. Soviet troops on the Karelian Isthmus now totaled 26 divisions, 1 rifle-machine gun and 7 tank brigades. The Finns had 7 infantry divisions, 1 infantry, 1 cavalry brigade, 10 separate infantry, rangers and mobile regiments. Of the 80 Finnish battalions, 239 were Soviet. Soviet troops were superior in artillery with a caliber of 122 mm or more by 10 times. The Soviet troops had four divisions of great power for the destruction of reinforced concrete fortifications.

Thus, when the appropriate forces and means were accumulated for the destruction of the Finnish fortified areas, the Red Army hacked the Mannerheim Line, despite the winter, snow and Finnish stubbornness. Bunkers and bunkers were destroyed artillery caliber 152, 203 and 280 mm. Finnish soldiers called the 203-mm howitzer of the 1931 model (B-4) “the Stalinist sledgehammer”, and ours called the “Karelian sculptor”, as they turned long-term structures into bizarre ruins of concrete and steel (“Karelian monuments”). To destroy the bunker, from 8 to 140 kilogram shells of these guns were required. In this case, the pillbox usually lost its combat value at the beginning of the process. But only complete destruction convinced the infantry that one could go further.

For example, in the 123rd Infantry Division of the 7th Soviet Army, which stormed Summayarvi, in February 1940 there were 18-mm “Stalinist sledgehammers” and 203-mm mortar “Br-6”. They used up 280 shells during the preparation of the offensive in the first decade of February, having achieved 2 direct hits. Dot "Popius", which stopped the division in December 4419, was destroyed by 247 direct hits. Also for the elimination of enemy fortifications, explosives were actively used. So, the second powerful fortification of the Summayarvi Dot No 1939 site was blown up, laying a mountain of boxes with explosives on it. At first, the artillery defeated the Finnish infantry around the bunker, the Soviet arrows completed this process, the sappers planted the explosives. The explosion on the roof of the western casemate forced the Finnish garrison to flee. Next, the pillbox finished off with two tons of TNT, laid under the walls.

They also dealt completely with other engineering structures of the line with quite ordinary means. The hollows were undermined by explosive charges, shifted tanks T-28, destroyed by armor-piercing shells. Passages in minefields and wire fences were carried out by artillery and mortars. Severe frost and deep snow did not save the Finns. 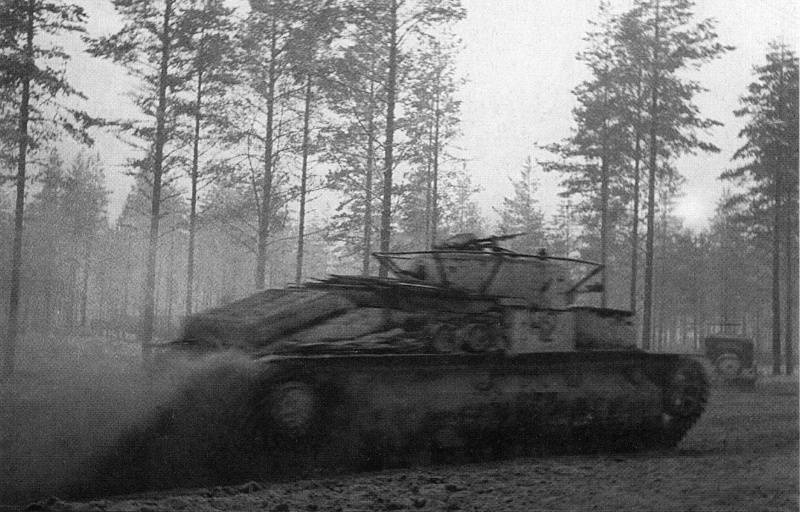 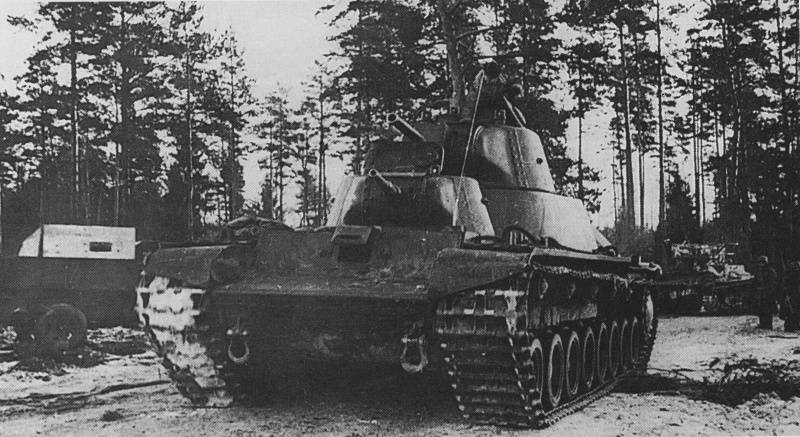 Soviet heavy tank T-100 from a special group of heavy tanks on the Karelian Isthmus. February 1940 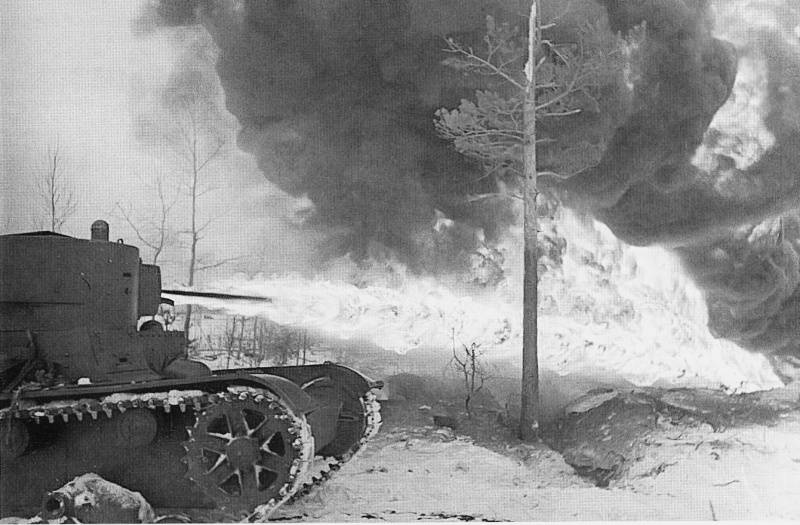 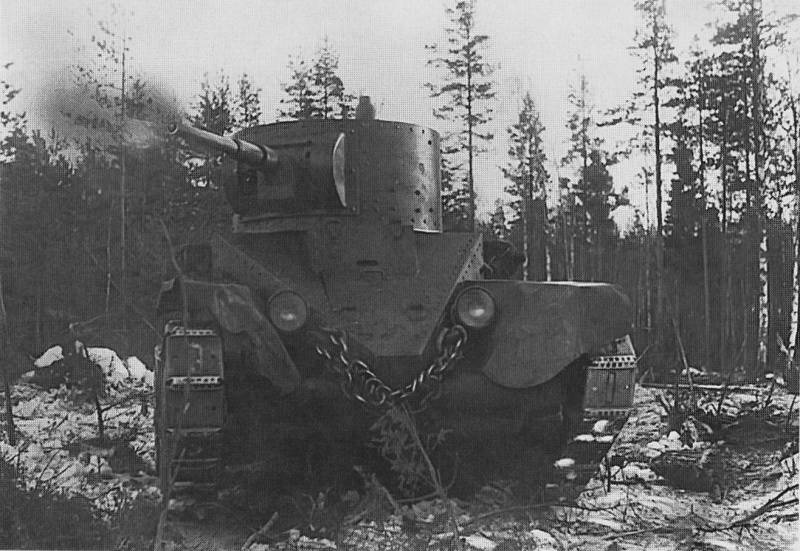 Soviet tank BT-5 fires on the Finnish bunker on the Karelian Isthmus. February 1940

February 11, after a strong artillery bombardment began a general offensive of the Red Army. The main blow was inflicted on the Karelian Isthmus. After a three-day assault, the 7th Army divisions broke through the first line of defense of the line. Tanks were introduced into the breakthrough. The Finns, in order to avoid being surrounded, retreated to the second line of defense. By February 21, our troops reached the second defense line; on March 13, they entered Vyborg. The defense was broken through, the Finnish army was defeated, further resistance was pointless. Finland had no choice but to ask for peace.

The stop of the Red Army in the Winter War was associated with errors in command and intelligence, and underestimation of the enemy. It was necessary to carry out work on the mistakes, to accumulate strength and resources and to storm the "Mannerheim Line" in accordance with all the rules of military art. After eliminating the mistakes, the accumulation of forces, the Finnish defense was hacked at a good pace.

The Red Army has shown that there is no “impregnable” defense for the modern army. During an operational pause, the location of all enemy fortifications was clarified. Concrete fortifications were destroyed by heavy artillery, explosives, flamethrowers, and air bombs. In addition, the Finnish army had weak artillery, aviation and tank units and could not provide effective counteraction.

As a result, the Finnish campaign revealed both shortcomings in the command of the Red Army and the possibility of the Red Army as a fully modern army in 1940, mechanized, with a lot of artillery, tanks, aircraft, special and engineering units. The Soviet army could break through a strong enemy defenses, develop success by attacking tank formations and infantry.

True, the "world community" was left impressed by the first stage of the war - unsuccessful for the Red Army. In January 1940, Churchill declared that Finland "had revealed to the whole world the weakness of the Red Army." This erroneous opinion was shared by Hitler and his entourage, which led to fatal errors in the Reich military-political strategy towards the USSR. 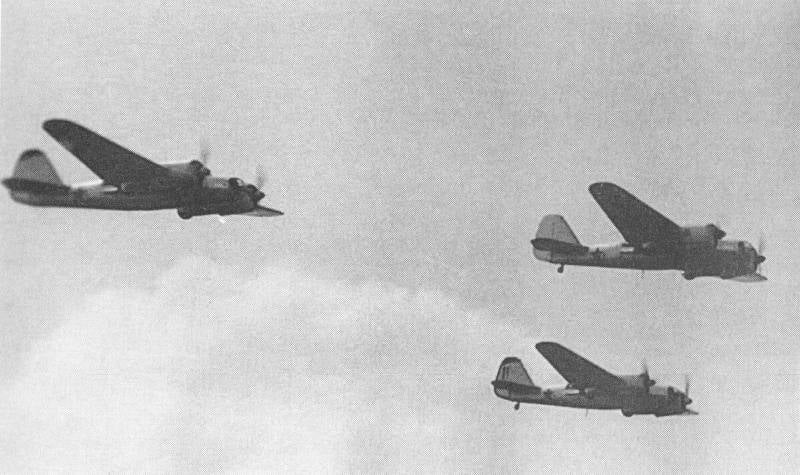 The link of the Soviet SB bombers in flight. February 1940 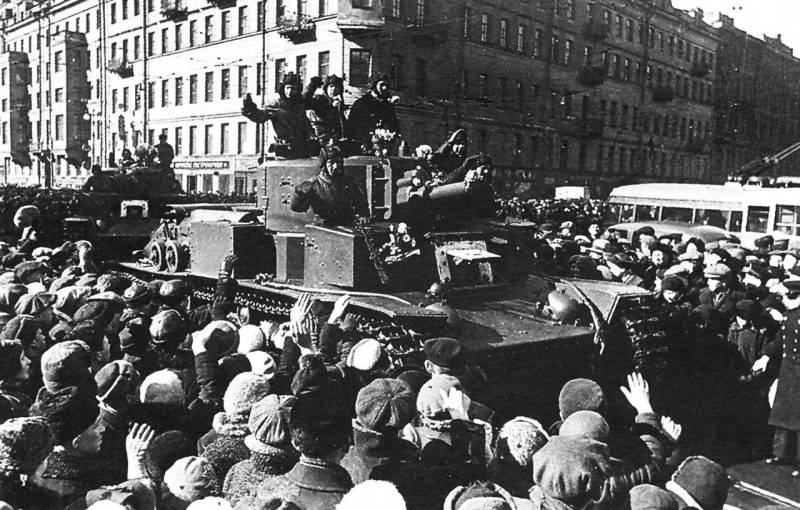 Residents of Leningrad welcome tankers of the 20th Tank Brigade on T-28 tanks returning from the Karelian Isthmus. 1940 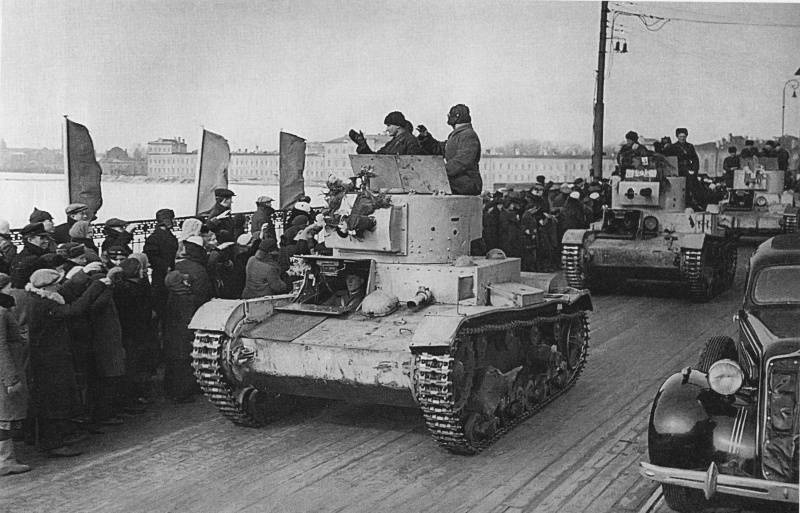 Leningraders on Liteiny Bridge meet a column of OT-130 tanks (a flamethrower tank based on the T-26 tank) that have returned from the Karelian Isthmus. March 30, 1940

We are in Yandex Zen
Myths of the Great Patriotic. Papier mache helmet
Stalin and Finland
169 comments
Information
Dear reader, to leave comments on the publication, you must to register.