The appearance of the atomic bomb gave rise to a new class of weapons - strategic. Some time after the advent of nuclear weapons (NF) in the USA, and then in the USSR, it was considered as a weapon of the “battlefield”, scenarios of its use were actively worked out, large-scale exercises were conducted. It was believed that the use of nuclear weapons in the course of real hostilities was only a matter of time. 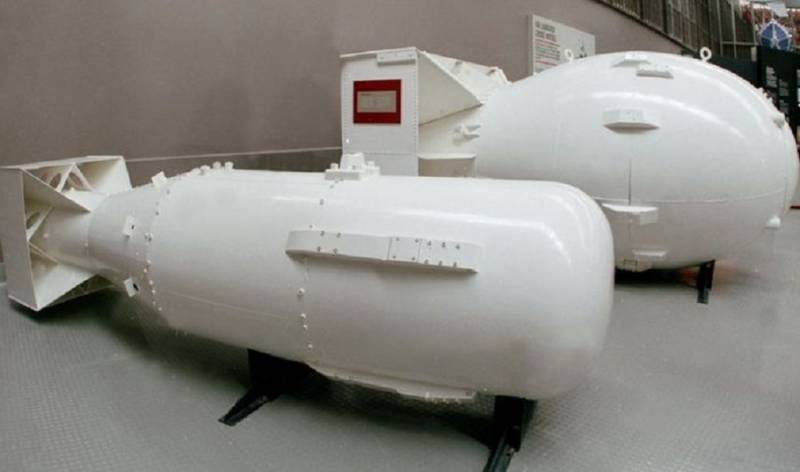 Meanwhile, the number of nuclear weapons in the United States and the USSR was growing rapidly. At a certain point, it became clear that its use threatens not only the mutual annihilation of the warring parties, but also the emergence of significant risks for the very existence of human civilization. Nuclear weapons have transformed from “weapons of war” to “weapons of intimidation”, nuclear parity has been achieved that does not allow the Cold War to go into the hot phase. At the peak of the Cold War, the number of nuclear warheads in the United States was about 30 000 units, in the USSR - 40 000 units.

Despite the fact that there was a cold war between the USA and the USSR, “hot” military conflicts took place almost continuously in the world, in which both superpowers were directly involved and often suffered very noticeable losses. However, not a single superpower, apart from the bombing of Hiroshima and Nagasaki, has ever used nuclear weapons in military conflicts. Thus, nuclear weapons became the first weapons that are not actually used, but at the same time the costs of their creation and maintenance are very high.

Depending on the carriers, nuclear weapons are either allocated as a separate type of armed forces, as is done in Russia - Strategic Missile Forces (Strategic Missile Forces), or is part of the Air Force / Air Force fleet (Navy). There is also a tactical nuclear weapon (TNW) for various purposes, however, one way or another, in the existing conditions, its use can be justified only in the event of a global conflict, so that it can also be attributed to some extent to strategic weapons.

One of the interesting directions is the creation of the so-called “clean” nuclear weapons, which ensures minimal pollution of the surrounding area with the products of radioactive decay, however, apparently, such studies are currently at a dead end. In attempts to reduce the size of nuclear weapons, various exotic fissile materials, such as the hafnium isomer 178m2Hf, were considered as “fillings," but for various reasons no real weapons were created on the basis of these studies.

Former chief of staff of the US Air Force, General Norton Schwartz, said that America has a high-precision tactical nuclear weapon with a low emission of radiation and with the minimum possible "incidental losses" for the civilian population. Obviously, what was meant was not a “clean” nuclear weapon, but the latest modification of the B61-12 nuclear bomb with an accuracy of hit from 5 to 30 meters and with a TNT equivalent power adjustable from 0,3 to 300 kilotons. 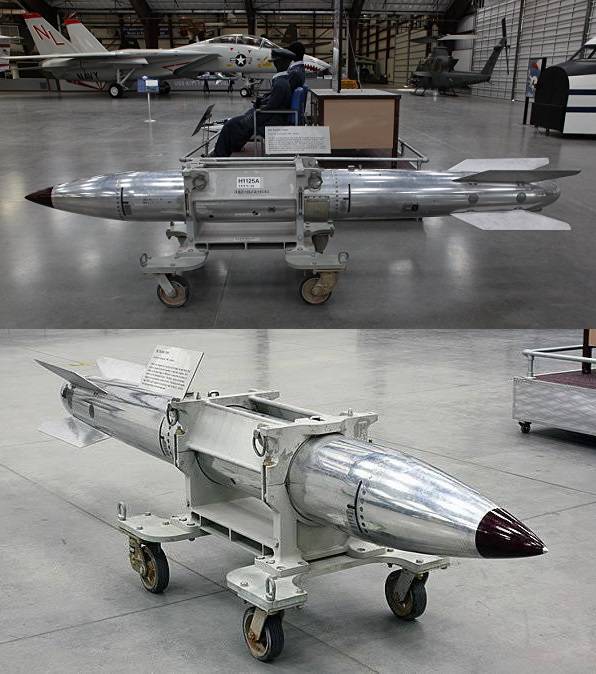 Despite the optimism of the US military, it is likely that low-power nuclear bombs will remain in storage, unless of course the situation in the world does not go “apart”, since their use will lead to extremely negative political consequences and can cause a global conflict. If the United States nevertheless decides to use nuclear weapons, then this will automatically release “genie from the bottle”, which is possible for one, then it can be for others, after the USA, other countries can start using nuclear weapons as well - Russia, China, Israel.

In addition to the nuclear charges themselves, strategic nuclear forces also include their carriers. For the Strategic Missile Forces and the Navy, such carriers are intercontinental ballistic missiles (ICBMs), located respectively in mines, on mobile ground platforms or on strategic missile submarine cruisers. For the Air Force, the carriers of nuclear weapons are primarily strategic missile-carrying bombers.

The greatest involvement in local wars is played by strategic bomber bombers, which are actively used to deliver massive strikes against the enemy with free-falling and guided munitions with conventional warheads. It can be noted that from the point of view of nuclear deterrence, missile bombers are the most useless component of the nuclear triad, primarily because in the event of a sudden attack, aircraft with a probability close to 100% will not be refueled and equipped with nuclear weapons. Given the compact basing of missile-carrying bombers at several air bases, this will allow the enemy to destroy them with a first disarming strike. In addition, their weapons - long-range cruise missiles (CR) can be detected and destroyed by almost all types of tactical aircraft aviation and air defense equipment of the enemy. Part of the situation can be corrected by the development of long-range aeroballistic missiles with a nuclear warhead, but taking into account the remaining problem of destroying carriers directly at airfields, the feasibility of this can be called into question.

The most active in local conflicts use their US bombers, to the extent that some aircraft are completely withdrawn from the strategic nuclear forces and are intended only for delivering conventional weapons. 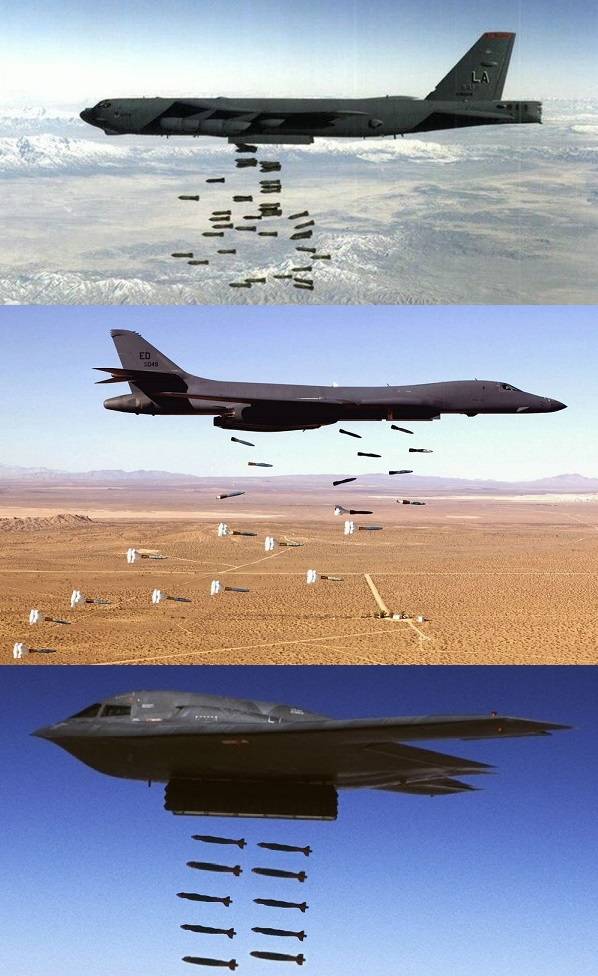 Russian strategic aviation was also noted during the military operation in Syria, using cruise missiles (which can be considered as field tests and a demonstration of force) and free-falling bombs. 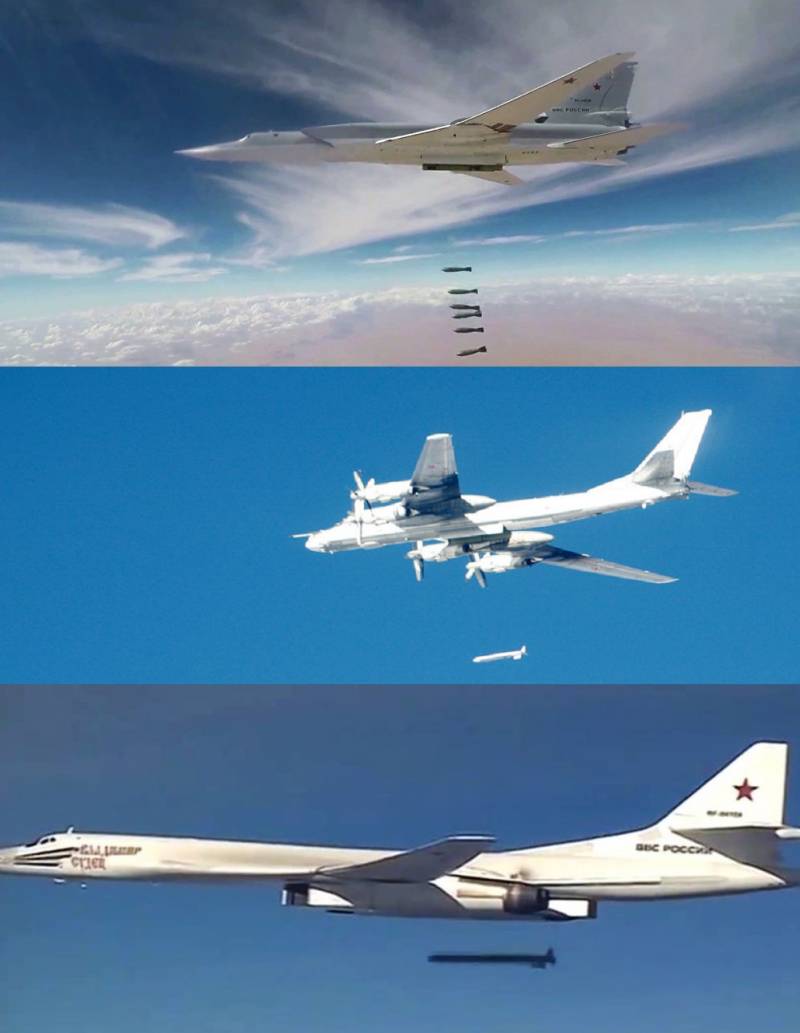 Using ICBMs in local conflicts is much more complicated. In the USA there is a program “Fast global strike” (BSU). Within the framework of the BSU program, it was supposed to provide the US armed forces with the opportunity to strike at a target anywhere in the world for 60 minutes from the moment the order for destruction was issued. As the main means of defeating BSU, ICBMs in non-nuclear equipment, hypersonic weapons and space platforms.

The creation of space-based strike platforms is currently apparently undergoing preliminary research, although it could be a serious threat in the future. The first samples of hypersonic weapons are being tested and can be put into service in the coming years.

However, the simplest solution is non-nuclear ICBMs. The United States is considering the possibility of equipping strategic Ohio submarines of the Trident II ICBM with a non-nuclear warhead, including four warheads with a satellite navigation system and several thousand tungsten rods or a monoblock warhead weighing up to two tons. According to the calculations, the speed of approach to the target should be about 20 000 km / h, which eliminates the need for explosives, ensuring the destruction of targets by the kinetic energy of the damaging elements. When using warheads with striking elements in the form of tungsten pins directly above the target, warheads are detonated, after which a tungsten shower is likely to destroy all life on an area of ​​about one square kilometer. 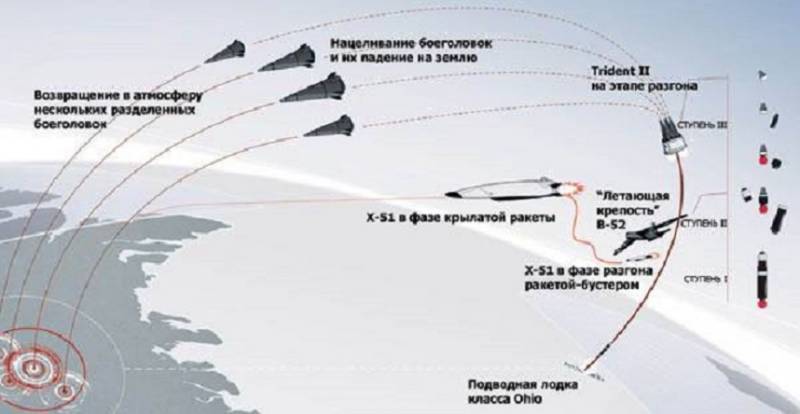 In addition to technical difficulties, political obstacles arose in the implementation of the BSU concept. In particular, the use of US ICBMs in non-nuclear equipment in some situations can provoke a massive retaliatory strike by Russia or China. Nevertheless, developments in this direction are continuing, in the START-3 agreement non-nuclear ballistic missiles are counted as ordinary ICBMs with nuclear warheads. According to the US command, the number of ICBMs in non-nuclear equipment will be limited, so they are not able to significantly weaken the defensive capabilities of the United States, while the real threat of using such weapons will give far more military and political dividends.

Until plans to deploy ICBMs in non-nuclear equipment are realized, their only real use is the infrequent launch of satellites into orbit, and disposal by launch as part of the exercises. 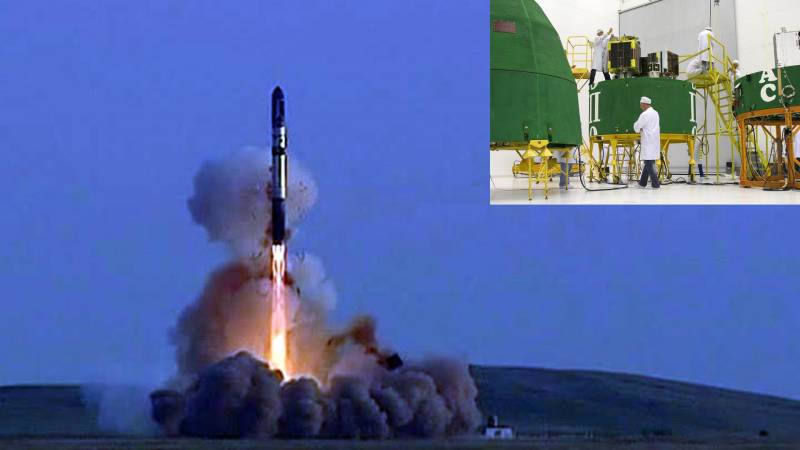 To what extent can the use of strategic weapons in non-nuclear equipment be effective in the framework of the activities of the Russian armed forces? It can be assumed that in some cases the effect that restrains from hostile actions, achieved by equipping strategic carriers with conventional warheads, may be higher than from nuclear weapons.

The recognition by the leadership of any unfriendly non-nuclear country that it can at any moment be destroyed by weapons, from which there is practically no protection, will greatly contribute to their adoption of reasonable and balanced decisions. The objectives of the second level can be considered a military base, ships at the pier, large industrial facilities, infrastructure elements of the fuel and energy complex.

Thus, the objective of strategic conventional weapons can be formulated as causing damage to the enemy, significantly reducing their organizational, industrial and military capabilities from a distance that minimizes or excludes the likelihood of a direct military collision with the enemy’s armed forces.

Based on the task to be solved, an approximate composition of forces and means can be formed that can be effectively used to solve problems with strategic conventional weapons, which we will discuss in the next article.