Results of the week: Stalin is not on us


Almost no one in Japan, not primarily in the United States, remembers the missing pilot. Much more important for the same Washington is the wreckage of the F-35 and its on-board recorder. At the same time, paranoia is gaining momentum, and individual “experts” added up to the fact that “it would be better for the plane to feed the fish than at least some fragment of it went to the Russians or the Chinese.” After all, Russian hackers from the secret underwater laboratories of the GRU are already walking along the seabed with torches and rakes in search of debris. 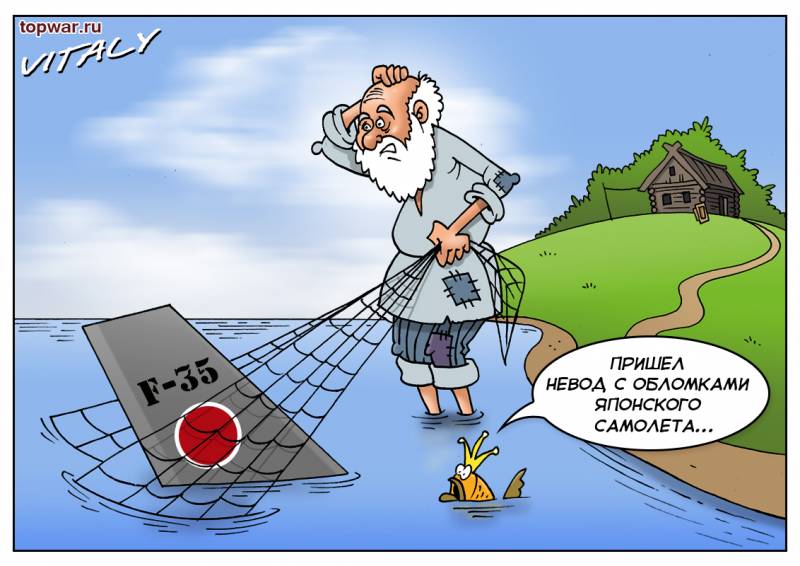 F-35 fallen into the sea from the submarines of Russia and China are protected by dozens of ships
If it is found, go to F-15: the reaction in the United States to a possible search for F-35 RF and PRC

Surprising readers of the Western media spying. Okay, spying, but the densest stupidity shines through the comments. From the fact that Russia and China can get all the “secrets” of the plane to the small wreckage to “I hope that all the raisins on the plane will quickly decompose into salt.”
Or maybe the "highlights" will float in the Russian or Chinese waters? Let them twitch, and at the same time spend a lot of money, guarding what Russian-Chinese submarines are so "torn", and divers scribbling along the bottom in search of the treasured piece.

Stalin comes to us

And why are we all discussing Stalin? Stalin is not with us! ..

And the growth of the Stalinist "rating" is understandable. When reports come every day that an official stole a couple of billions, when the size of a bribe sometimes exceeds the 10-year salary of the average state employee, when “not completed, not completed, not finalized, because the money was spent in an inappropriate way” when the bureaucrats, telling about patriotism, children serve in the ranks of American power structures, then the image of Stalin ... he somehow ... by itself ... 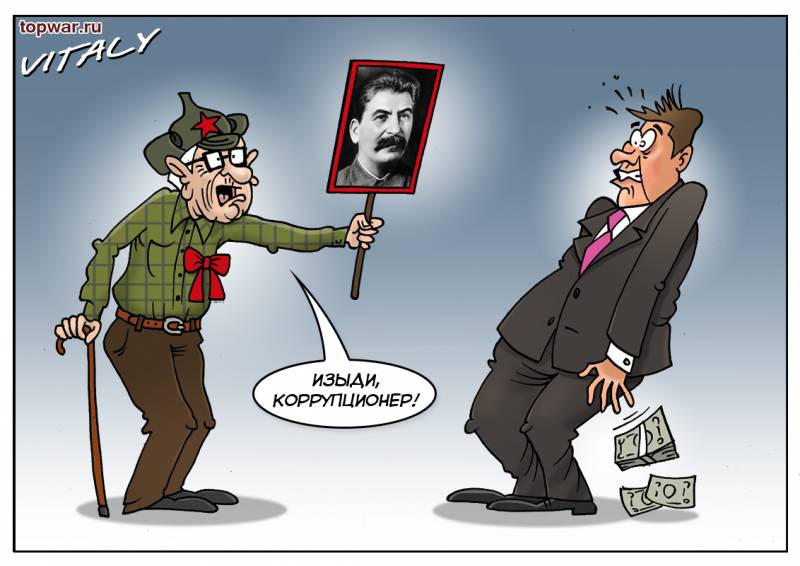 Under the Soviet regime, I was not a special supporter of Stalin, but, having lived with the Yeltsin and Putin democrats, I became an ardent Stalinist ...

No wonder. We work strictly according to the “ecological” rules - first the forest is cut down at the root, then big people appear and, accompanied by young naturalists and cameras, they bury the seedling in a prepared hole. So with the ships. First, cut everything, then think what to build, how much to build, where to get the money and how much was stolen even before they started to build something. It's a shame. 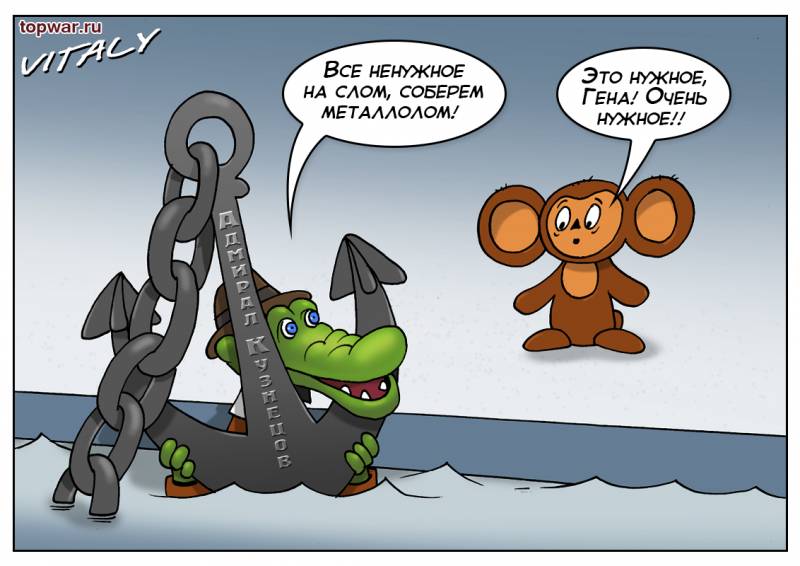 A look from the West: the Russian Federation is better to cut the aircraft carrier on the metal than to shame
"Eagles" go for disassembly

The problem with the patriots is that they do not see and do not believe in obvious things. For them, we are still the best in space, we have a modern aircraft carrier, the 5 generation aircraft is also the best, though not in the series, but still, also with Armata, etc., but in fact - we modernize the Soviet equipment.

All progressive humanity survived until the second round of the presidential elections in Ukraine, when a person democratically seized power during a democratic coup in the country is preparing to democratically lose to a democratic protege of another oligarchic branch. As you can see, dear friends, democracy is literally in everything. And because Washington approves. And, this should happen: again, these Russian saboteurs, saboteurs with shoulder straps and scouts with crusts, wanted to hinder the democratic procedure, but the vigilance of the SBU saved Ukrainian democracy. 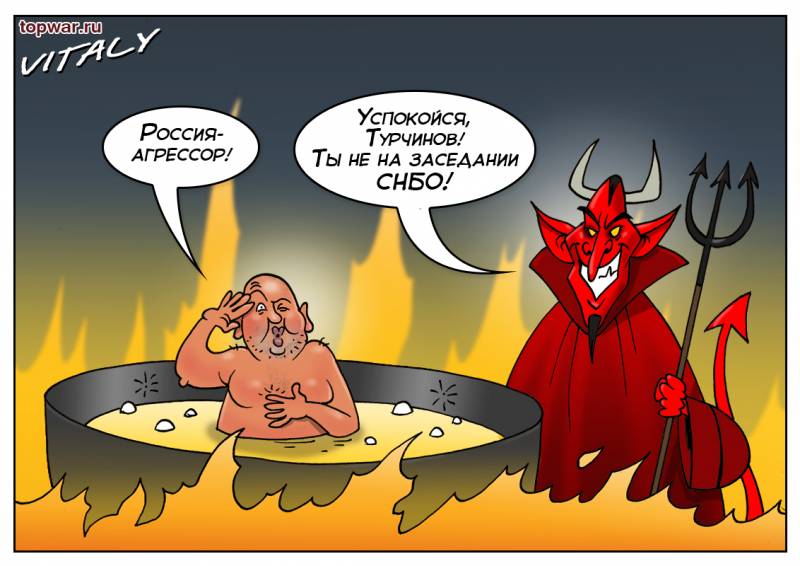 Poroshenko will help, only an attempt on himself!

The quality of Russian anti-aircraft missile systems today, few in doubt. As proof - a queue of customers of the same C-400. Moreover, customers are even ready to receive on the top of the United States, but they do not refuse from their contracts (and why refuse, if for the same Turkey a contract is still for the funds of a Russian loan ...).

But quality is one thing, quantity is another. The pace at which new aircraft are riveted both in the West and in the USA, by definition, cannot be alarming. When a quantitative advantage aviation potential enemy is estimated as "at times" over our air defense systems, this can not but alarm. 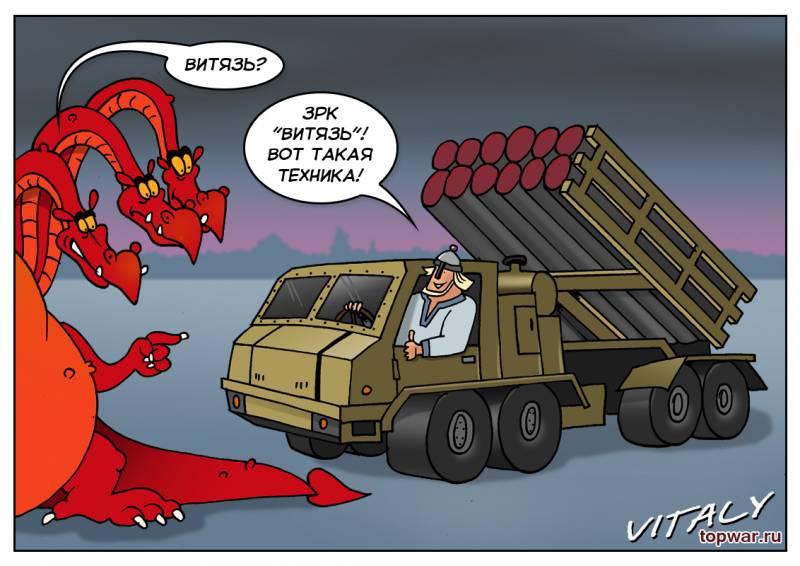 The question of the effectiveness of modern air defense systems against modern low-profile aircraft remains open, and considering that in a decade f-35 will be the most widespread issue in NATO, it is very important, so far it is clear that stealth will be noticed at a much shorter distance than the 4 generation, but how much and how successfully they will be captured by air-to-air missiles and ground-to-air missiles is incomprehensible, while every sandpiper praises its own swamp and there is no objective data. This is me to the fact that it would not have happened that at some moment all our air defense suddenly turns out to be useless rubbish.

Of course, the fire in Notre Dame is a tragic event for the whole world culture. But the following fact looks even more tragic: at a meeting with representatives of French business, Russian President Vladimir Putin declares his readiness on the part of the Russian Federation to provide all possible assistance to France in connection with a fire in Notre Dame Cathedral, and at this time the French authorities decide to transfer their tanks and BMP closer to the Russian borders - to Estonia. What's this? Rudeness and unscrupulousness ordinary? Or already beyond? Or for Macron - a fire option to save the rating in both cases ... 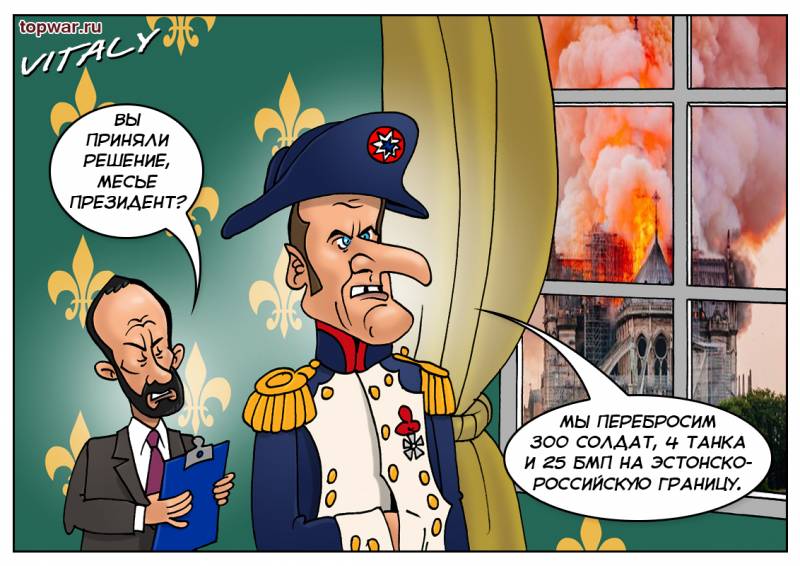 You can now build a mosque on the site of the cathedral. Anyway, no one believes in God there, except for Muslims.