Combat identification systems of coalition forces. Is the process going? (Part of 1) 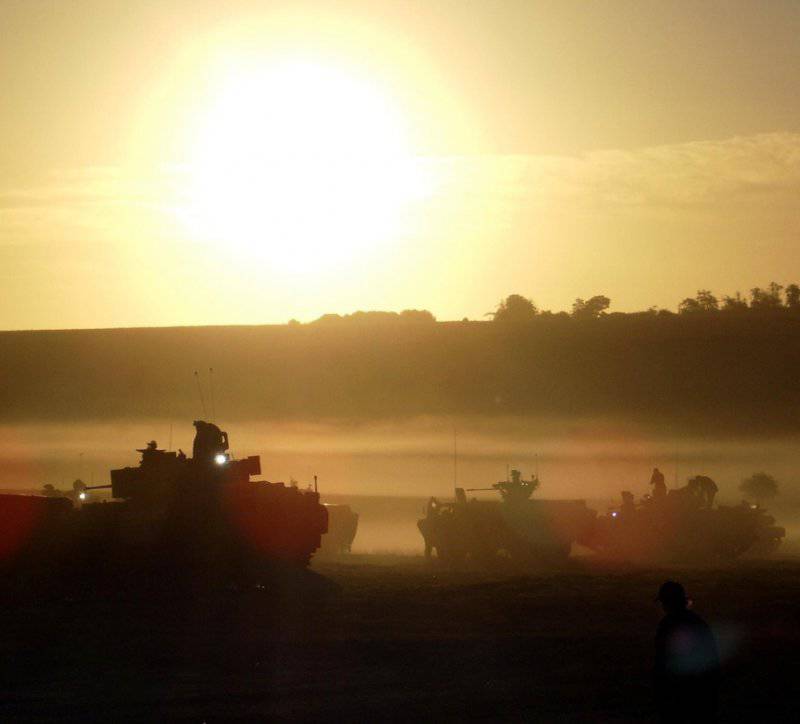 Throughout stories armed conflict fratricide was a recurring problem for all parties to the conflict. The US command of combat training and doctrines defines fratricide as "the use of friendly weapons and ammunition with the intention of hitting the enemy or destroying its weapons or material base, which leads to unforeseen and unintentional deaths or damage to its personnel." Cases of friendly fire occurred in all types of combat, including air-to-air, air-to-ground, ground-to-air and ground-to-ground battles. Preventing fratricide is a complex problem and does not have a simple solution.

The importance of mitigating cases of friendly fire has never been so important as it is now in the international arena, when the role of coalition operations is growing. The strategic and operational importance of such events prompted all combat armies to put fratricide on the top of their agenda; accordingly, there is a good reason for finding solutions not only to reduce the incidence of erroneous firing, but also to minimize friendly fire everywhere.

The prevention of fratricide cannot be studied and understood without considering the main cases of fratricide and, therefore, assessing why modern combat operations have a very high percentage of cases of friendly fire.

Applying the appropriate basic doctrine of firing to prevent fratricide at first glance is quite simple:
- Track the movement of their own forces, constantly reporting on their movement and location, which is performed by the control points;
- Determine the location of the enemy by collecting information in real time;
- Separate their own and others, ideally at the expense of aiming complexes or at the expense of other special systems;
- When positive identification is set to shoot to kill.

Unfortunately, the definition of this in practice is one of the most difficult tasks, especially in a modern combat environment. All this is based on several factors:
- Modern military offensive operations are carried out at a very high rate and around the clock, sometimes the troops move across inconspicuous terrain with limited visibility conditions;
- Many skirmishes occur in motion with shelling of fast moving targets at long distances;
- Especially in desert conditions, virtually unlimited combat ranges usually affect the shooter’s ability to determine positive target identification, even if he has thermal sights;
- Accurate real-time knowledge of one’s own location, as well as the disposition of one’s own and enemy forces, is determined not only by visibility conditions, but also depends on disorientation and the commanders ’lack of time to draw up regular reports with full engagement in combat.

Thus, a common cause of fire in its own way is the absence of Situational Awareness (SO). When studying fratricidal incidents, almost every case is due to some lack of CO soldiers involved in the operation. In turn, errors of CO may be due to inadequate instructions or lack of clarity of orders (understanding), they may include navigation errors of combat air or ground units or may be caused by external conditions.

Another common mistake contributing to fratricide is inaccurate combat identification or positive identification. This can be particularly difficult in the space of coalition forces, which increasingly exceeds the norm. Insufficient airspace management or coordination of fire often contributes to fratricide. Finally, mistakes of firing, for example, the interruption of discipline in its conduct or the violation of the rules of a collision with an enemy are often the causes of fratricide.

All of the above clearly shows that the prevention of fratricide includes various measures, ranging from technological developments to appropriate forms of training, tactics and methods (OTM), shooting rules and rules of warfare. While this article will focus on modern progress in combat identification systems, it is necessary to understand that they should not be considered separately and it is necessary to carefully avoid the fact that this or that technology is a complete and self-sufficient solution. And even with regard to combat identification in itself, it is achieved by raising and combining situational awareness and identification capabilities of the target. Combat identification is not just gadgets (useful devices) and technology; its goal is to enable soldiers and commanders to make decisions quickly and correctly. The most effective way to do this is to have solid doctrinal concepts that are the basis for effective OTM forms.

This is all the more so because even the most sophisticated and efficient and reliable on 100% combat identification system for air-to-air applications can apparently completely exclude cases of fratricidal fire for its own and coalition forces, but can make very small contribution to prevent collateral damage or attacks on unintended civilian targets. The latter are too common during asymmetrical conflicts, such as during ongoing operations in Afghanistan and not even to mention humanitarian considerations that have a very powerful negative political influence. Adequate forms of OMT are only medicine. 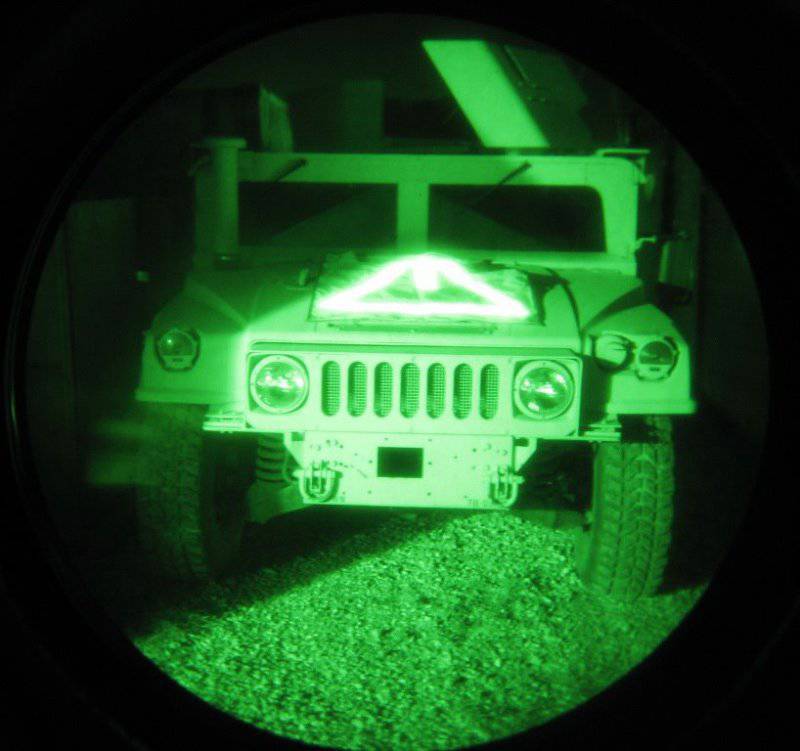 A military vehicle marked with the Target Recognition Notice I system (a small lane in the center) and the TRON III system is shown through night-vision goggles during an operation near the air base near Bagram. TRON's Joint Identification Technology was developed by the Air Force Research Laboratory in collaboration with the civilian industry to support coalition forces. 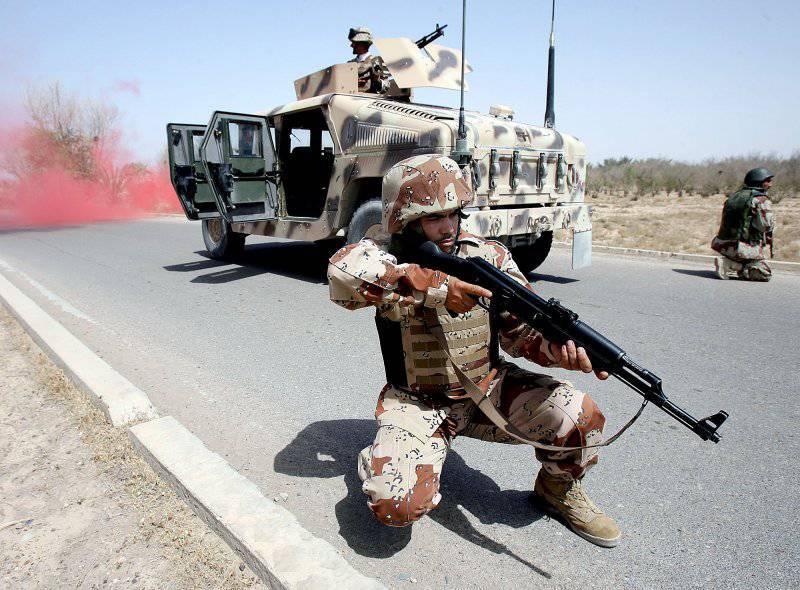 Iraqi soldiers work in a situation that simulates damage to a car during an exercise. There is a check of the Lightweight Mobile Tracking System, a simplified version of the automatic tracking system on its own. The system is designed to enable Iraqis to work independently, while knowing that emergency assistance is called at the touch of a button.

Concepts of recognition of "friend or foe" and combat identification

The development of communication channel channels and combat identification devices, such as, for example, using the “friend-foe” (IFF) definition technology (with the aim of giving operators a common operational picture) essentially increased the CRs of both already given orders and those that are executed, thus influencing the root cause of fratricide.

IFF systems are used on almost all aircraft in the US and coalition forces; today, frequencies are standardized on 1030 MHz for polling and 1090 MHz for answering.

It must be understood, however, that IFF is the wrong name for what concerns army applications. The identification of a stranger is impossible using existing technology, rather, existing systems can identify their own or unknown on the battlefield, thus unknown can be friendly forces with a non-working transponder or, without having it at all, a neutral or enemy machine. This restriction may indeed be accepted for normal air-to-air operations (although visual confirmation of a goal is increasingly seen as the norm in asymmetric conflict situations), but the limits of the errors it entails are too large to be acceptable for ground operations and air-ground operations. 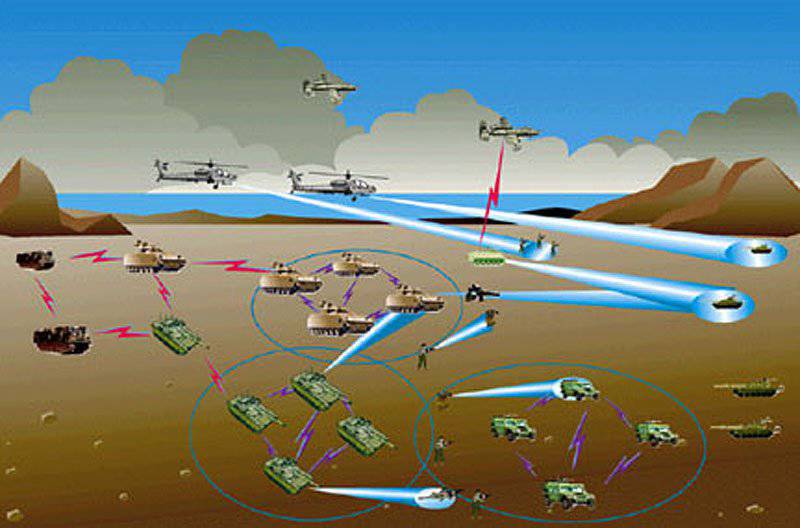 The goal of combat identification is to ensure the positive identification of its own and coalition assets involved in air-to-ground combat operations. 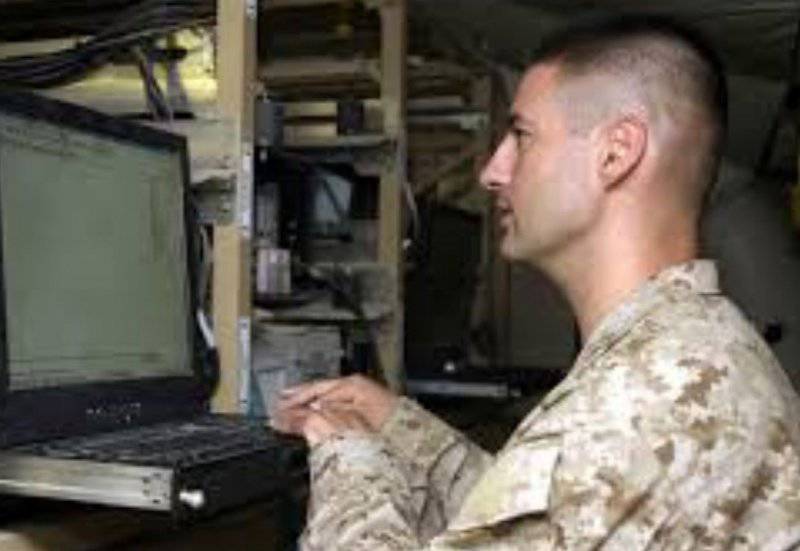 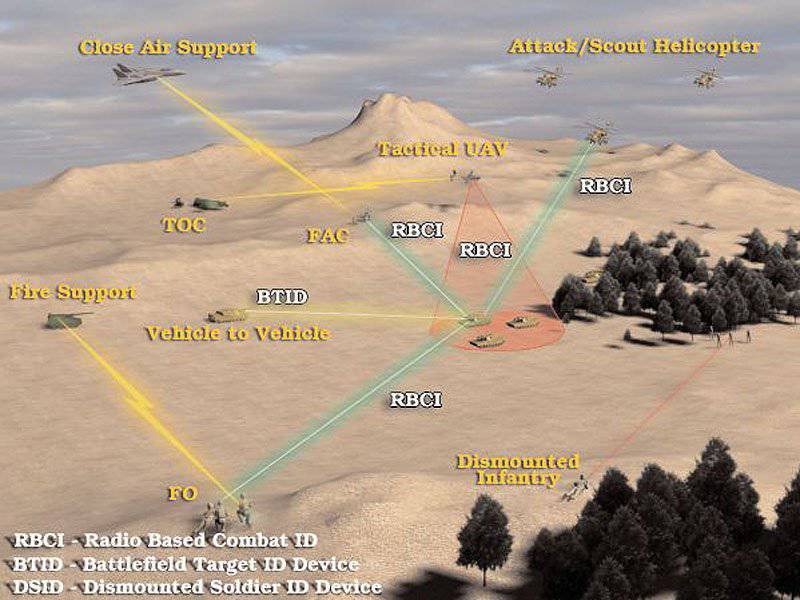 Shortly after Desert Storm, the Pentagon conducted research on the development of a combat identification system (CID) for ground vehicles. The system, known as Battlefield Combat Identification System BCIS (Battlefield Combat Identification System), used an encrypted transmitter and receiver that could interrogate other machines that have a system similar to the IFF system. However, the system was ultimately rated as overly expensive, over 40000 dollars per car, and so the program was closed in the 2001 year.

The United States continued to develop a tracking system, which, in the end, was delivered to ground forces during operations in Iraq and Afghanistan. American infantrymen worked with the MDACT tracking system (Mobile Data Automated Communications Terminal). MDACT consists of a clear line-of-sight encryption communication system, which depends on the EPLRS data transmission station. Units can send their location and the location of enemy forces that are confronted in their combat area through a tactical data network to obtain a general operational picture for the forces operating in the same area. Unfortunately, the size of the combat area of ​​the Marine Corps and the rapid proliferation of combat units caused the troops using MDACT to exceed the capabilities of the system’s direct visibility. In accordance with the lessons learned in the Iraqi operation, the MDACT system requires appropriate advanced training for operators and network engineers. In addition, MDACT information was not compatible with other systems that provide information to develop a common operational picture.

The second type of tracking device, known as the Force XXI Battle and Command Brigade and Below (FBCB2) or the friend or foe system, uses a commercial L-band communication system that is used by the US Army to transmit position information via text messages or its tracking devices. and includes a graphic display showing the position of their forces, as well as the forces of the enemy. Although the system is easier to use than MDACT and is not limited to direct visibility, it still had several drawbacks. The bandwidth restrictions did not allow the transmission of large amounts of data transmitted through the satellite system. The transfer of files and images was too slow so that they could be used during the fighting. Also, it was noted that there was a delay (known as latency) when transmitting data to command center receivers. Some delays in updating the location lasted for five minutes and such delays in updating the position of their forces could be fatal. This latency has increased further due to the rapid ground operations. The user was also able to remotely bring the system into an inoperative state when it fell into the hands of the enemy, but it was not known whether the system was captured by the enemy or it was in the hands of its forces.

But, in general, ground forces using the “friend or foe” system are very proud of its characteristics. However, the system remains incompatible with the data transmission systems of other systems, including the US Air Force and other ground-based coalition forces, but excluding the British army.

Programs and research on combat identification are also conducted in some other countries. The UK has developed a constantly emitting beacon using an M-band (94 GHz) transmitter, whose signals are received by other fire platforms equipped with high gain directional receivers. The French DIC (Dispositif d'Identification au Combat) is similar to BCIS technology. The German system (based on the D-Band / 1,090 GHz transponder) includes a laser interrogator, which emits coded light pulses produced by a low-power solid-state laser. Coalition platforms are equipped with IR detectors that produce D-band encrypted radio frequencies transmitted from a D-band directional antenna. Israel introduces the Combat Identification System (CID) for infantry and the ASTS automatic soldier recognition system, which automatically creates a situational picture of all forces in a certain area.