Explosives on NATO armor. Investigation of the "Bulletin of armored vehicles" 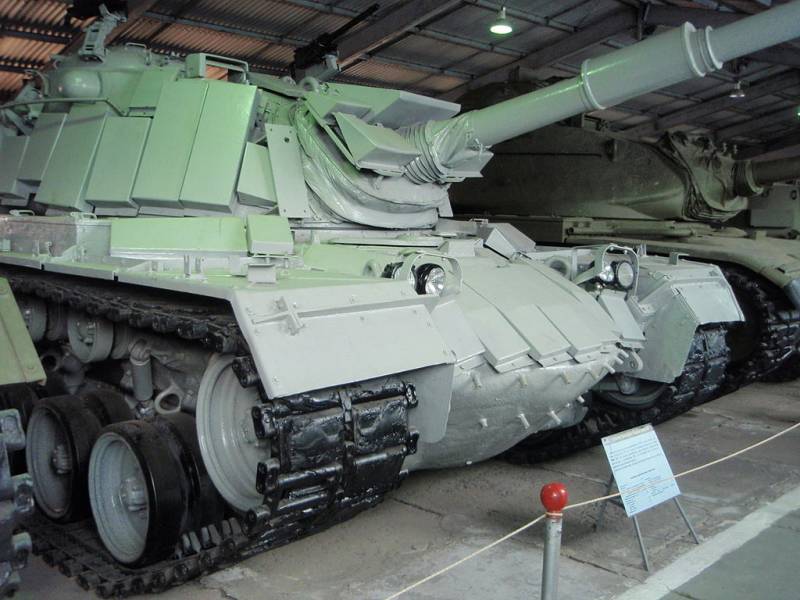 It's worth starting the material with a good news... At the conference "History development of domestic tank building ", held at the end of August at the forum" Army-2020 ", the idea of ​​reviving scientific and technical collections for industry specialists was expressed. This was hinted at in his speech by the head of the GABTU Sergei Vladimirovich Bibik. It is quite possible that the legendary "Bulletin of armored vehicles", whose history began during the Great Patriotic War and ended with the collapse of the country, will also be among the revived ones. It was in this edition that such grandees of domestic tank building as Joseph Kotin, Nikolai Kucherenko, Leonid Kartsev and others worked and published. However, even in the event of a revival of such a publication, materials from it will only be available to the general public in a few decades. We invite you to familiarize yourself with the articles that the Cold War era left us. 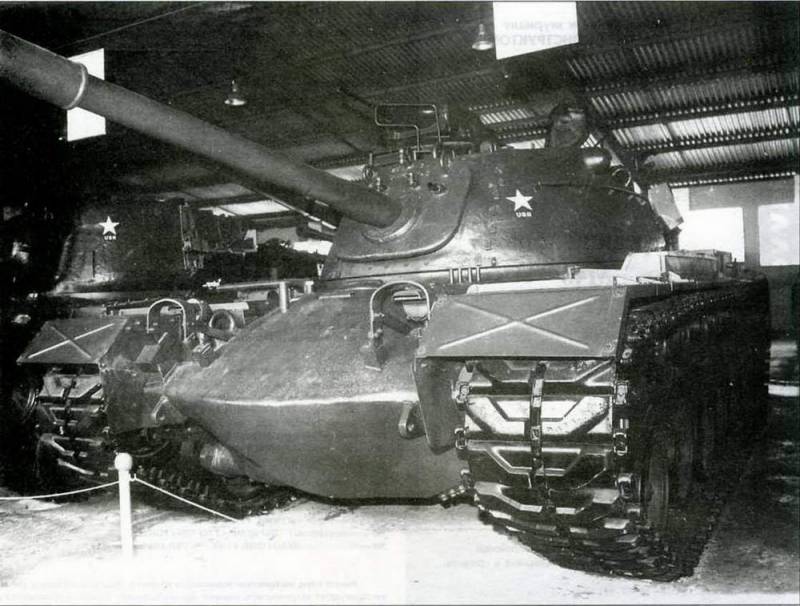 Trophy M-48A3 from Vietnam. Tank Museum in Kubinka. Source: arsenal-info.ru
In previous parts the cycle dealt with American tanks M-48, M-60 and theoretical calculations of domestic engineers. In this part, the story will be devoted to the M-48A3 tank, as well as its Israeli modification "Magah-3". Until a certain point, both vehicles were kept in a museum in Kubinka, but four years ago, an Israeli tank was sent home. Tel Aviv agreed to exchange for a similar, but not covered with such history, armored vehicle. The fact is that the M-48A3 was lost in battles with the Syrians near the Lebanese village of Sultan Yaakub on June 10, 1982. The fate of three of the four crew members is still unknown to the Israeli side: Zvi Feldman, Zachary Baumel and Yehuda Katsem. Obviously, a museum piece from Russia will become a kind of monument to the missing heroes of the Israel Defense Forces.

But the M-48A3 in the American specification ended up in the USSR during the Vietnam War in the late 70s. These vehicles were among the main victims of the confrontation: according to some estimates, the Americans lost at least 500 of these tanks in battles. The M-48A3 so often fell into the hands of the North Vietnamese that they were able to assemble a whole battalion from tanks, which was sent to the GDR. According to one version, the sabotage unit was equipped with tanks in East Germany. In addition, one car from Vietnam was sent to Moscow (we will talk about it), and one to Cuba.

The American tank did not make much of an impression on the engineers of Kubinka. Only the high-quality casting of the armor of the turret and the hull and the arched bottom, providing increased mine resistance, were highly appreciated. An interesting toolkit was used in Kubinka to study the armor of an American tank. In the simplest cases, a vernier caliper was used, and in hard-to-reach places, the DUK-6V flaw detector was used, measuring the thickness of the armor using the ultrasonic location method. The angles of inclination of the armor were estimated with an artillery goniometer KO-1. A portable Brinell device was used to determine the hardness of the tank's armor. The chemical composition of the armor was determined by shavings taken from various parts of the hull and turret. Studies have shown that cast parts are thermally treated to a low hardness, and rolled parts to medium hardness. The hull and tower are cast from chromium-nickel-molybdenum-manganese steel. Additional sides of the power compartment of the tank hull were cast from chromium-nickel-molybdenum-vanadium steel. As a result, the armor of the М48А3 was recognized by domestic engineers as insufficient for its time (the tank was not even fired upon). But the Israeli modification of the tank with Blazer reactive armor containers left a different mark on Soviet tank building.

In order to fit the elements of dynamic protection on the complex shapes of the cast hull and turret of the tank, the Israelis had to create 32 standard sizes of Blazer blocks at once. At the same time, six basic types of remote sensing elements were distinguished. It was these elements that were the main value of the M48A3 Magah-3 tank transported by the Syrians to the USSR. Some authors suggest that it was the appearance of a captured tank with reactive armor in the USSR in 1982 that prompted the development of such domestic technologies. Say, if not for the Blazer, then the famous DZ "Contact" on Soviet tanks appeared much later. In fact, the decision to start state tests of the secret DZ at the start of the Lebanese war had already been made. That is, samples of protection were already ready, experimental design work was carried out, and technical documentation was created. The presence of a highly effective DZ Blazer on American armor only confirmed the correctness of the chosen path by domestic engineers, and also pushed gunsmiths to develop new types of cumulative ammunition.

But back to the Israeli M48A3 Magah-3, the frontal projection of which was 80% covered by Blazer blocks, placed with a gap of no more than 7 mm. Dynamic protection had a mass of 876 kg, of which about 56 kg accounted for fasteners and 38,4 kg for explosives. The engineers separately emphasize that if all this mass were spent on a banal thickening of the tank's armor, then the final protection would increase very slightly. Therefore, in terms of the mass / efficiency ratio, dynamic protection was out of competition in comparison with armored steel.

Each block of DZ Blazer contained from 288 to 429 grams of explosive. Chemical analysis by thin-layer chromatography and infrared spectroscopy revealed that the explosive consists of 91,5% RDX, 8,5% polyamide-type polymer, mineral oil (8,5%) and blue organic dye. Chemists suggested that copper can determine the blue color (remember blue copper sulfate), and carried out a qualitative reaction to the ions of this metal. But it wasn't copper. And among the properties of the dye, only the ability to dissolve in ethyl alcohol and not dissolve in water was determined. The final composition of this dye has not been disclosed. As a result, the explosives were identified as an analogue of the S-4 plastic, which was widespread in the NATO troops at that time. BB was a crystalline blue mass, similar in consistency to ordinary plasticine. The machine oil in the composition added a characteristic smell to the explosive and left greasy marks on the paper. C-4 was melted from the Blazer explosive reactive armor at a temperature of 164-166 degrees. 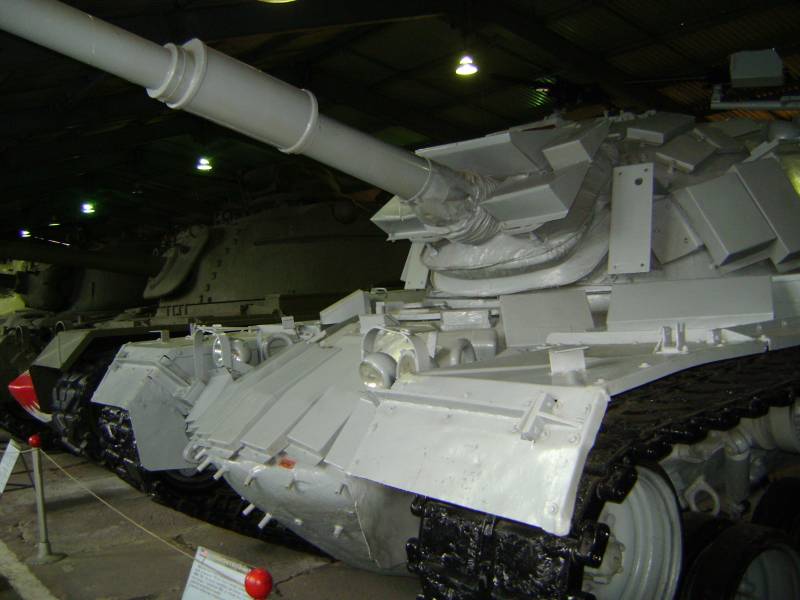 Israeli M-48A3 in the tank museum in Kubinka. Source: wikipedia.org 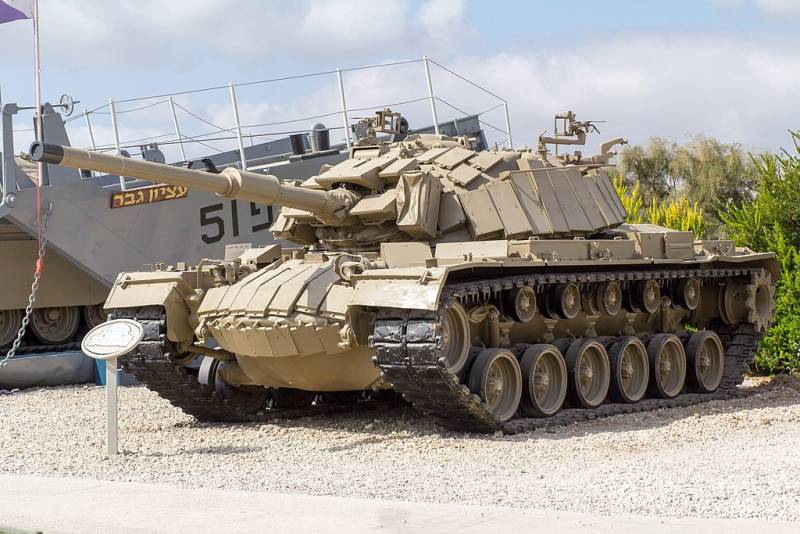 The same tank, but already returned to Israel. Source: wikipedia.org
After laboratory studies of the newest protection of the old man M-48A3, it should have been fired at with cumulative grenades. We chose SPG-9 "Spear" with its 73-mm ammunition and 93-mm grenade PG-7VL "Luch" from RPG-7. Before testing, the elements of dynamic protection were dismantled from the armor of the tank and installed on a special machine in front of the rigidly fixed cumulative grenades. The blasting was carried out with an electric detonator, and the efficiency of penetrating the DZ block was determined by the depth of the caverns from the metal stream on the armor installed behind the Blazer elements. 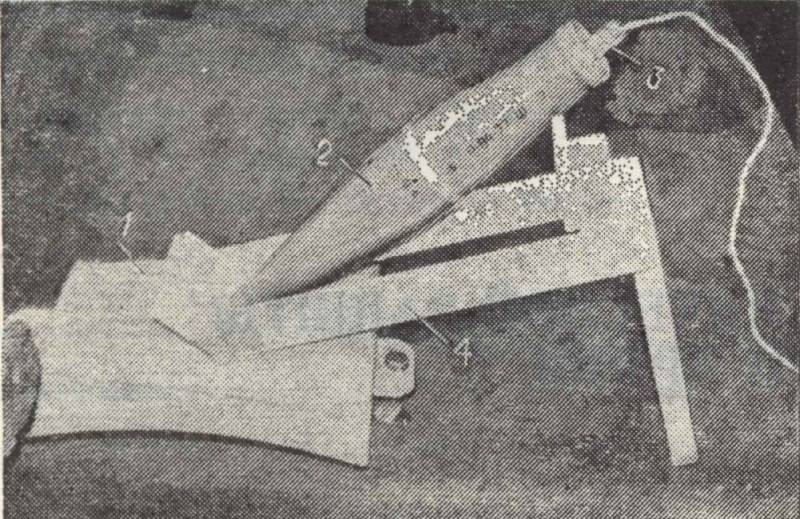 Installation diagram of the container of the warhead of a grenade: 1 - container; 2 - warhead; 3 - special assembly for detonating a grenade; 4 - stand. Source: "Bulletin of armored vehicles"
In total, 24 shots were fired at different meeting angles (from 20 to 65 degrees). They showed that the Israeli DZ significantly reduces the possibility of hitting a tank with domestic grenade launchers. Without explosive reactive armor, the M-48A3 armor could be penetrated with hand grenade launchers even in 127-mm places, the most thick-armored. And in the early 80s, when trophy armor was tested, the tank was not hit in the forehead by a single cumulative grenade at course angles of fire up to 30-40 degrees. Only the sides and stern remained vulnerable (it was generally deprived of DZ) at heading angles of meeting with ammunition over 40 degrees. In the material, the authors cited theoretical calculations, according to which the DZ blocks increase the resistance of the tank's armor to the cumulative jet by an equivalent thickness of 80-300 mm! And if you spend a lot of reactive armor on a simple thickening of the armor, the gain would be a meager 16 mm. Incommensurate ratio: The Blazer was cheap, durable and very lightweight.

Ctrl Enter
Noticed oshЫbku Highlight text and press. Ctrl + Enter
We are
"Bulletin of the tank industry." Tank technology classified as “secret”Secret "Contacts"
18 comments
Information
Dear reader, to leave comments on the publication, you must to register.