Disruption of the tower. Expert opinion of the Bulletin of Armored vehicles about the Cold War tanks 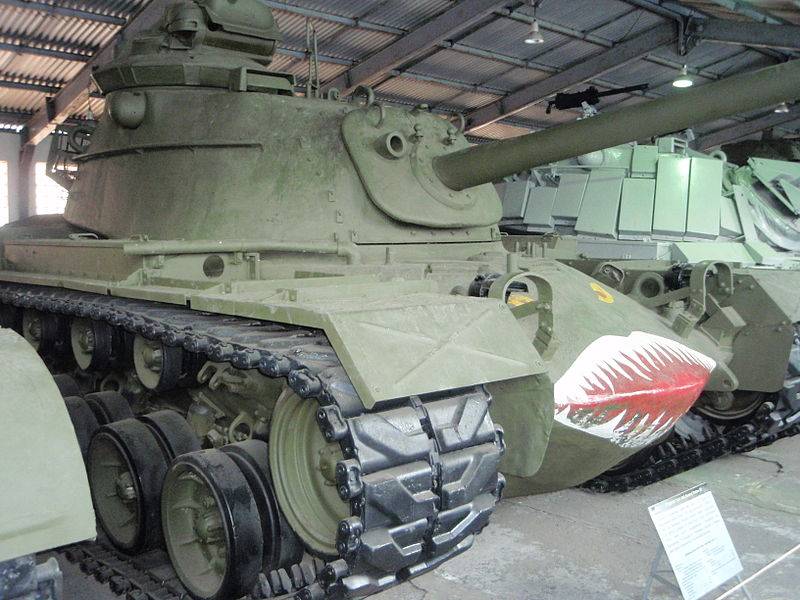 В previous section the material referred to the secret edition of the Bulletin of Armored vehicles, which has now become invaluable historical source.

Tank troops have always been in the forefront in the Soviet Army, and it is only natural that the branch publication in the post-war years was only gaining popularity. In the 50s, the publisher was the Authority of the Main Directorate of Tank Production of the Ministry of Transport Engineering. And after 10 years, the journal is considered scientific and technical and is published under the auspices of the USSR Ministry of Defense Industry. To be completely accurate, the publisher was the Leningrad VNIITransmash of the 12th Main Directorate of the Defense Industry. However, on the covers of the magazine invariably appeared the inscription: “Moscow”, and this was a simple explanation: the editorial office was located in the capital at ul. Gorky, 35. Since 1953, for 20 years, the renowned tank designer, winner of three Stalin Prizes Nikolai Alekseevich Kucherenko became the chief editor of the magazine.

In 1961, the secret publication turned to readers with a request for a timely subscription. At that time, the pleasure of reading such a magazine cost 180 rubles a year. “Bulletin of armored vehicles” came to subscribers every two months. Naturally, only persons with appropriate access were allowed to use such literature. An interesting situation with the circulation of the publication. In the post-war period, information on the number of issued copies appears sporadically (from 100 to 150 copies). The level of secrecy of the Bulletin is evidenced by the fact that each journal was affixed with the serial number of the copy. 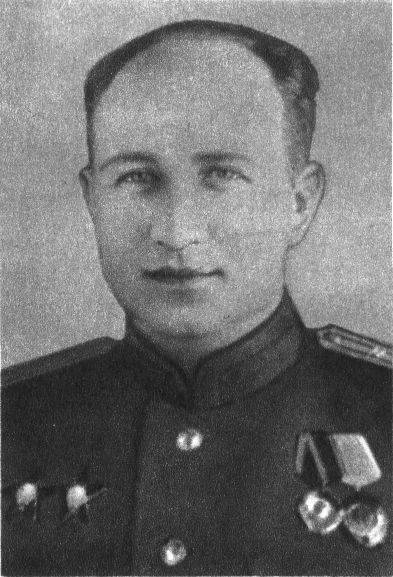 Nikolai Alexandrovich Kucherenko, laureate of three Stalin Prizes, a famous tank builder, editor-in-chief of the Vestnik from 1953 to 1973. Source: ru.wikipedia.org
At the end of the 60s, the following sections of the journal took shape: “Design. Tests Research ”,“ Armament. Equipment. Devices ”,“ Technologies ”,“ Materials ”,“ From the history of armored vehicles ”and“ Foreign military equipment and industry ”. The last section is of the greatest interest. 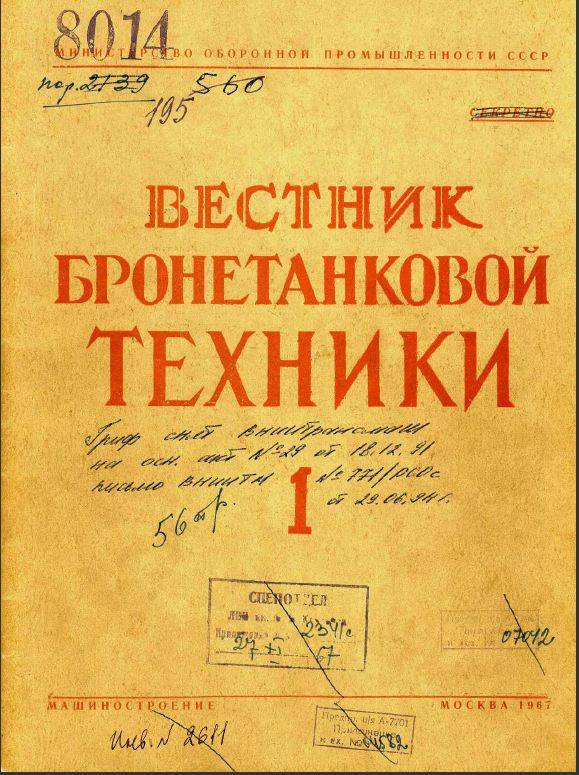 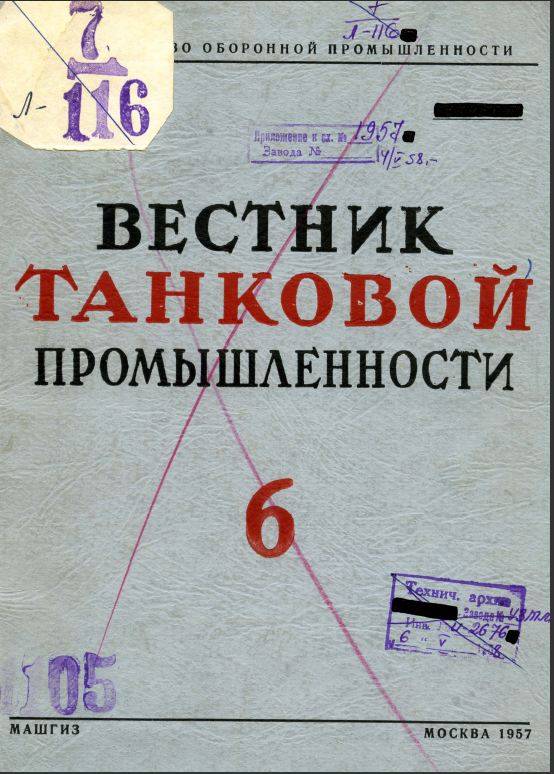 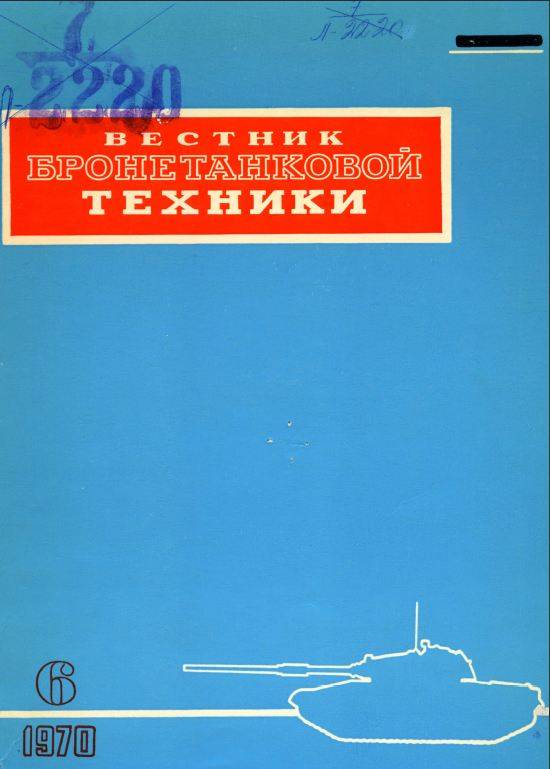 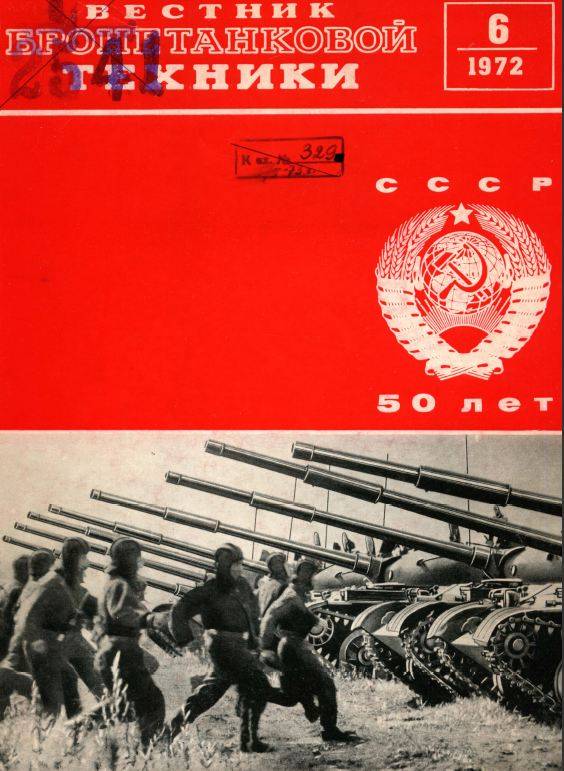 The evolution of the covers of the magazine "Bulletin of armored vehicles"
The fact is that in the post-war twenty years this section published almost exclusively the results of its own research by VNIITransmash, VNII Steel and military unit No. 68054. The last object is currently the 38th Research Testing Order of the October Revolution, the Red Banner Institute named after Marshal of the Armored Forces Ya. N. Fedorenko, or NIIIBT Polygon in Kubinka. Research engineers conducted on the basis of these institutions a detailed study of foreign models of armored vehicles that entered the USSR in various ways. In particular, the M-41 light tank, which entered the country from Cuba, was studied in detail (it will be discussed in the following publications). But part of the research was purely theoretical.

The Bulletin of Armored Vehicles in 1958 (No. 2) published an interesting article by Lieutenant Colonel Engineer A. A. Volkov and Captain Engineer G. M. Kozlov about the armor protection of the American M-48 tank. It is worth recalling that this armored vehicle was put into service in the USA only in 1953, and a few years later it was "fired" in Kubinka. The tank, by the way, didn’t have time to really war. The authors were impressed by the solid-cast hull and turret of the tank, as well as the seriously enhanced armor compared to the predecessors of the M-46 and M-47. Due to a serious differentiation of the thickness of the armor, on the one hand, it was possible to increase the projectile resistance, and, on the other, to reduce the weight of the tank (in comparison with the M-46). As the authors note,

“The manufacture of solid cast hulls of the M-48 tank was organized in the USA by the in-line method with the widespread use of mechanization of such heavy and labor-intensive work as flask filling and casting. The quality of the castings is controlled by a powerful betatron installation. The production capacities of the American industry, in particular, the availability of specialized foundries, allow, in turn, to increase the productivity of tank enterprises. ”
This frees up part of the rolling and pressing equipment, and also reduces the consumption of armored steel and electrodes per unit of output. All these factors, according to engineers, are very important in wartime conditions when mass production is required. It also discusses the organization of such a thing in the USSR. Given the realities of Soviet industry in the late 50s, the authors propose not to cast the whole body, but to weld it from individual cast elements.

Now about the resistance of the American tank to Soviet shells. The authors were guided by both technical intelligence data and the "Proceedings of the Stalin Academy of Armored Forces", which states that the "American" armor is homogeneous of low hardness. It is practically no different from the armor of the M-26 and M-46 tanks, which were investigated in reality in Kubinka. And if so, then the results can be completely extrapolated to the new tank. As a result, they “fired” M-48 with armor-piercing 85-mm, 100-mm and 122-mm shells. The 85 mm caliber was expectedly powerless in front of the molded case and the M-48 turret. But the 100 mm and 122 mm completely coped with their task, and in the first case, the most effective was the blunt-headed armor-piercing projectile. Further quote from the article: 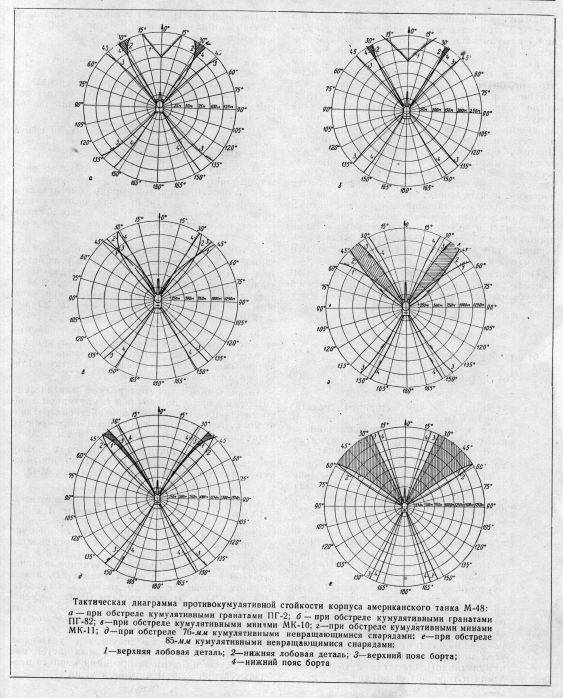 Tactical diagram of the cumulative resistance of the American tank M-48
And if you hit the tank with a cumulative shell? Here, the authors had to take a timeout of two years. Only in 1960 did they publish an article in the Bulletin of the Journal “The Cumulative Resistance of the Armored Corps of an American M-48 Medium Tank”. In this case, the "shelling" was carried out by 85-mm and 76-mm cumulative non-rotating shells, as well as the MK-10 and MK-11 mines. According to the theoretical calculations of Volkov and Kozlov, these anti-tank weapons penetrate the tank from any angle and from any range. But the cumulative grenades PG-2 and PG-82 (from the ammunition RPG grenade launcher), the authors could not penetrate the upper frontal part of the tank. In fairness, we note that from all other projections the M-48 was successfully hit by grenades.

If such an article were published now, and even by a youth publication, then it would be called "How to tear down a tower from a tank?" But in 1968, the Vestnik published material with the long title “Comparative assessment of the possibility of breaking down the towers of some tanks of capitalist states under the influence of a shock wave of a nuclear explosion.” Then no one was striving for screaming headlines. Obviously, the authors (engineers O. M. Lazebnik, V. A. Lichkov and A. V. Trofimov) considered the collapse of the tank tower to be the most important consequence of a nuclear strike, if the explosion energy was not enough to turn the car over. During the study, not a single tank was injured, but there were a lot of them: the French AMX-30, the American M-47 and M-60, the Swiss Pz-61, the British Centurion and Chieftain, as well as the German Leopard. The reference point was taken the stability of the tower T-54, which breaks at a load of 50 tons. All the authors' calculations were built precisely around this value, they assumed that foreign tanks would break the tower at a 50-ton load. 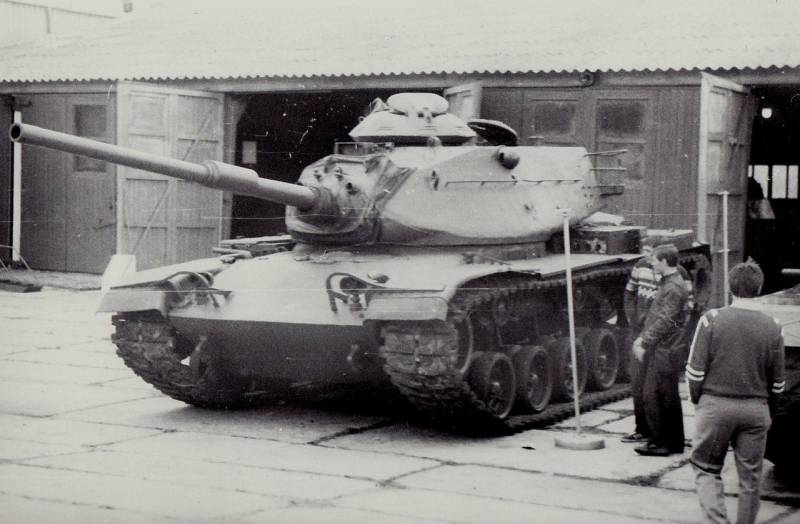 M-60 in Kubinka. Archival photo of the 80s. Source: andrei-bt.livejournal.com
Theoretical calculations have shown that the “Americans” with their large side and frontal projections of the towers will have the worst of all. M-47 and M-60 will receive 50 tons per tower with overhead pressure of about 3,7-3,9 kg / cm2 and board - 2,9-3,0 kg / cm2. On this the shortcomings of the tanks of the capitalist states end. The remaining armored vehicles tower stability was higher than that of the domestic T-54. If we extrapolate according to the graphs presented in the article, then the Leopard, Pz-61 and AMX-30 will break the tower with a 60-ton, or even 70-ton impact. Naturally, the pressure of the pressure head in this case will be the same as for the T-54. The British "Chieftain" and "Centurion" are somewhat weaker, but still more stable than the Soviet tank.

It is possible that these theoretical calculations could have influenced the tactics of using Soviet atomic weapons, as well as the growth of its capabilities.

Ctrl Enter
Noticed oshЫbku Highlight text and press. Ctrl + Enter
We are
"Bulletin of the tank industry." Tank technology classified as “secret”Heavy tanks of the USSR in the postwar period
Military Reviewin Yandex News
Military Reviewin Google News
29 comments
Information
Dear reader, to leave comments on the publication, you must to register.