"Bulletin of the tank industry." Tank technology classified as “secret” 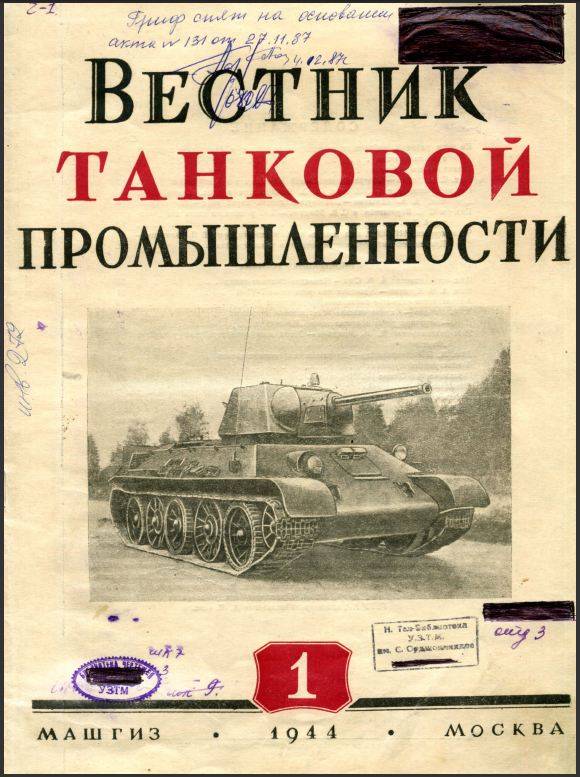 The very first issue of the Herald tank industry "

"Death to the German occupiers!"
Before you get acquainted with the unique materials of the specialized Soviet scientific and technical journal, it is worth briefly covering it history. The first issue of the magazine was published in 1944, when it became necessary to generalize the vast experience of tank builders and exchange views. All numbers carried a signature stamp, which began to be removed after more than 40 years. So, the first issue of the Bulletin of the Tank Industry became available to a wide audience only on November 27, 1987. And from the copies of the 80s, the privacy regime was removed only four years ago. 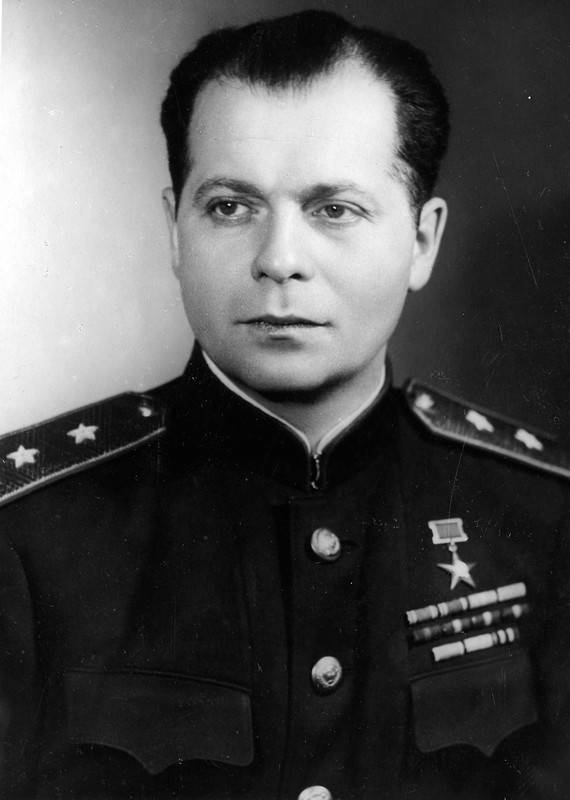 Joseph Kotin, the first editor of Vestnik. Source: ru.wikipedia.org
The order to organize the magazine was signed by People's Commissar Malyshev back in September 1943. The editorial board included the largest scientists and designers of the Soviet tank industry. Joseph Kotin, designer of heavy tanks and lieutenant general of technical troops, was appointed executive editor. Nikolai Sinev, deputy chief designer of the Kirov plant, worked as a scientific and technical editor and deputy editor of Kotin. The editorial board, among others, included metal scientist Andrei Zavialov, founder and director of the famous Armored Institute; Major General of the Tank Engineering Service, engine-designer Yuri Stepanov; Lieutenant Colonel Alexander Sych, deputy chief of the Kubinka test site for research and development activities. The editorial office was located in Moscow on Sadovo-Sukharevskaya street in the house number 11; Now in this building is the reception room of the Ministry of the Interior. The motto of the magazine was the slogan "Death to the German occupiers!"

It should be noted that the Bulletin of Armored Vehicles was not the only specialized tank publication in the country: since 1942, the Journal of Armored Forces was published in the USSR. It was a popular magazine without a signature stamp, in which materials were published on the combat use of equipment, experience in maintenance and operation (or, as it was customary to say, "exploitation"). If Vestnik was published by the People’s Commissariat of the Tank Industry, then the Magazine ... came out under the auspices of the Military Council of the Red Army armored and motorized rifle troops. Looking a little ahead, we mention that in the first issue of the secret Vestnik there were brief announcements of materials published in the Journal of Armored Forces. In particular, readers were notified of articles on the "organization and combat use of self-propelled artillery in the German army," "evacuation of emergency tanks," "shooting from a tank at night," and even "tactics for breaking through enemy defenses in a wooded area." 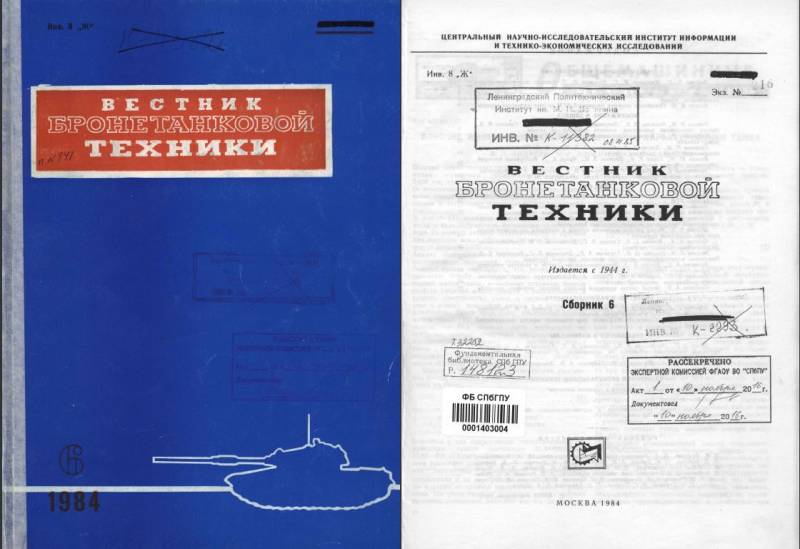 Over time, the publication evolved into the voluminous magazine "Bulletin of armored vehicles"
In the first January issue of Vestnik (signed on January 21.01.1944, 1000, with a circulation of 183 copies), the staff of the Nizhny Tagil plant No. 1943 "publishes to all workers, women workers, engineers, technicians and employees of the tank industry" is published. From a small text, saturated with emotions, you can find out that in 800 the plant refused 25 workers who were allocated to fulfill the plan, mobilized and by December 1943 had ahead of schedule fulfilled the annual rate of production of tanks. The plant’s labor productivity growth rates are striking: in 1942, compared to 28, the growth was 304%, and the cost of production fell by one fifth! At the same time, in Nizhny Tagil they still managed to restore the Kharkov plant and sent 4 metal-cutting machines, 150 foundry equipment units, a 1944-ton press and more than one and a half thousand units of tools per year. In the new 23, tank builders solemnly promise to work even harder and take on a host of new obligations. By February 10, factory workers are ready to give a column of tanks over their plan to the Motherland, and by the end of the first quarter - one more. Also, during the first three months of the new year in Nizhny Tagil, they pledged to organize at least 25 production lines for tank production and put into operation 5 new machines. A 1943% rule is set in circulation as a separate paragraph of the plan - they plan to increase productivity and reduce rejects in this first quarter. In 44-183, the Kharkov Tank Plant was sponsored by the plant number 60 (Nizhny Tagil). It was decided to block the plan in the supply of equipment to the Ukrainian enterprise. Additionally, 260 units of foundry equipment and machine tools, 120 electric motors, one oxygen unit, XNUMX units of equipment for “measuring” (especially the Russian language of that era) and metallurgical laboratories were obligated to be shipped. And at the end, the factory workers undertake to provide comprehensive assistance in organizing the sowing campaign, as well as logistical support for the three sponsored MTS.

On the pages of the publication

In the first issue of the Bulletin of the Tank Industry, the editorial board acquaints readers with the tasks facing the publication and invites all interested parties to send publications. A few quotes:

“The magazine will find coverage on issues of the design of tanks, artillery self-propelled guns, tank engines and units of tank equipment. A special place will be given in the journal to the consideration and analysis of the tank and anti-tank equipment of our enemy.
The magazine will also acquaint Soviet tank builders with the experience and achievements of the tank construction of our allies.
The main issues of the organization and technology of large-scale and continuous production of tanks, tank units and engines and the experience of advanced plants of the tank industry will occupy a certain place on the pages of our magazine.
The magazine will cover issues of armored production, the choice of metal grades used in tank building, as well as their processing technology. ”
As the authors, Vestnik saw "engineers and technicians, leaders and commanders of the tank industry." Articles were accepted only in printed form on sheets on one side at two intervals. They asked to remove all unnecessary from the images, drawings and graphs, which may be unclear.

Of considerable interest is a brief review of new books on tanks, published in the first issue of the Bulletin of the Tank Industry. In 1943 and the beginning of 1944, not only manuals on the “operation” of the T-34, KV-1s, SU-122, SU-152 and SU-76 (for official use) were published in the USSR, but also quite fundamental works. So, in Tashkent published a 786-page book “Tanks. Design and calculation. " It was the work of a team of the Military Academy named after I.V. Stalin. Professor N. A. Yakovlev in February 1944 published the textbook Design and Calculation of Tanks at the Moscow publishing house Mashgiz. And this is not the whole list of theoretical works of Russian scientists on the topic of tank construction, which were published during the war. The domestic industry was gaining momentum, and with it a huge amount of materials that needed to be compiled was accumulated.

From the very beginning of the magazine's publication and until the end of the 40s, the key topics related to reviews of foreign technology were German armored vehicles and Allied equipment. There was an abundance of materials to describe German technology - trophies provided engineers with a lot of interesting things. So, until 1949, they dealt with the device of the German 600-mm mortars and the super-heavy Maus tank. The editorial board regularly got acquainted with foreign magazines related to the tank building industry - the most important thing was published under the heading "Through the pages of foreign magazines." These were not translations, but only a very brief description of the topic of the article. Among the journals that were tracked by publishers were Automative Industries, SAE Journal, Automobile Engineer, and SAE Quarterly Transactions. For each interesting article, the output was indicated: the name of the journal, volume, number and page. What attracted the special attention of domestic tank builders? For example, "Five difficulties with diesel engine valves", "The influence of altitude on the operation of two-stroke diesel motors" and even "Noise suppression aviation engines. "

In 1946, the magazine was transferred under the wing of the Main Tank Directorate of the Ministry of Transport Engineering (the People’s Commissariat was abolished), and two years later it became a two-month scientific and technical magazine. 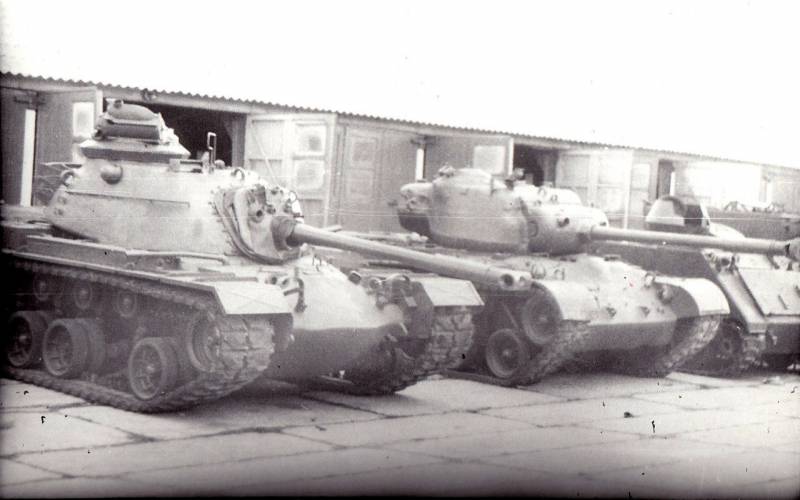 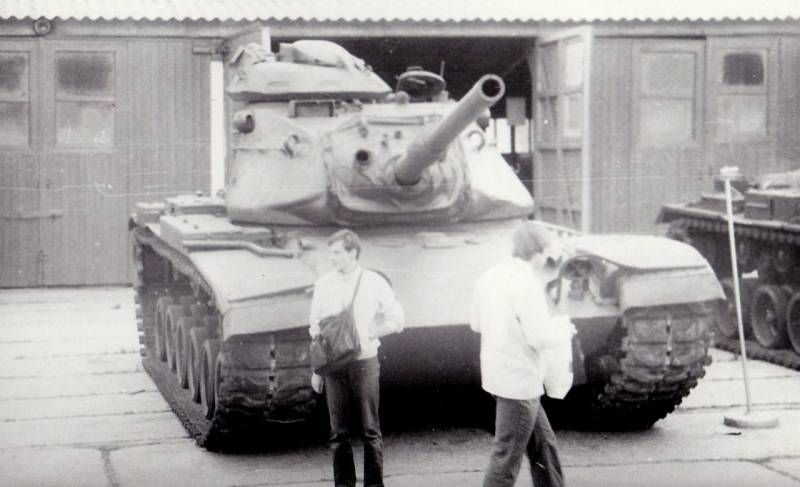 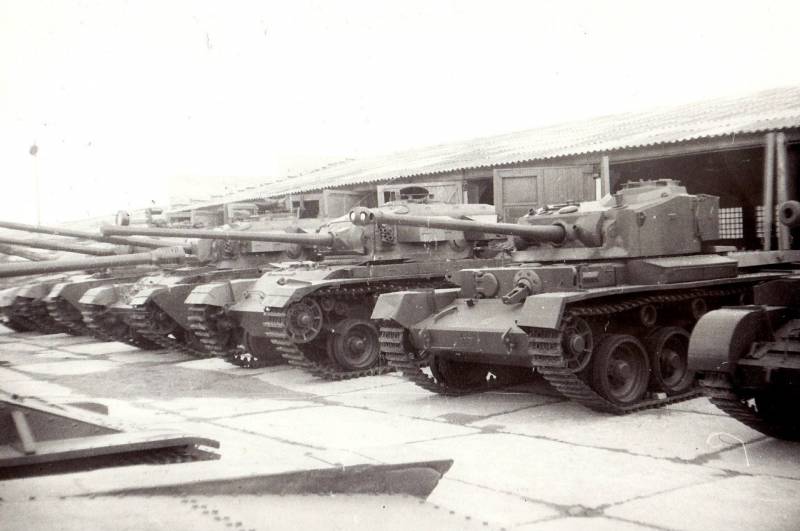 Foreign equipment in Kubinka. Photo of the 80s. Research by military engineers of the museum often became articles in the Bulletin. Source: andrei-bt.livejournal.com
For the first time, tanks of a potential enemy appeared in the Bulletin of the Tank Industry in 1952, when the American M-46 captured in Korea was studied up and down in Kubinka. Volumetric articles about the car were published for a year and a half; they did not form a good opinion of the tank. Regarding the chassis, the publication wrote that the M-46 does not contain anything fundamentally new and is essentially a repetition of the design of the chassis of previously produced American tanks. The layout of the tank, according to Soviet designers, can not be considered successful. Among the minuses, there were also large dimensions, weak armor protection, a small power reserve and, amazingly, the inconvenience and crampedness in the fighting compartment (especially the loader). 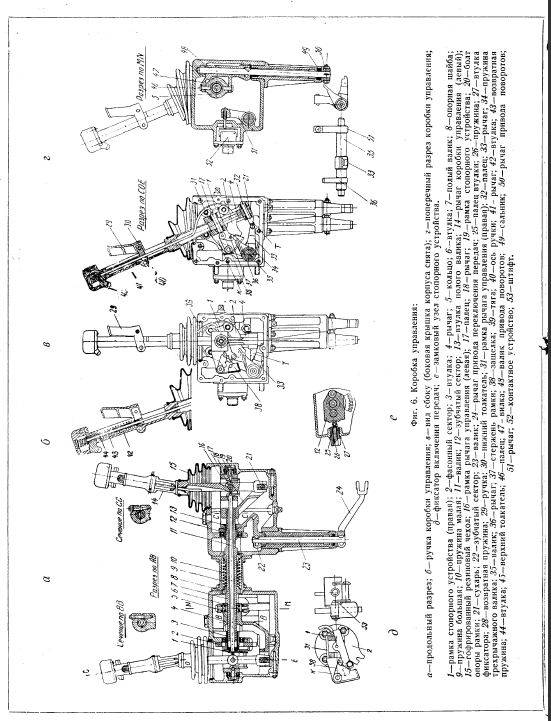 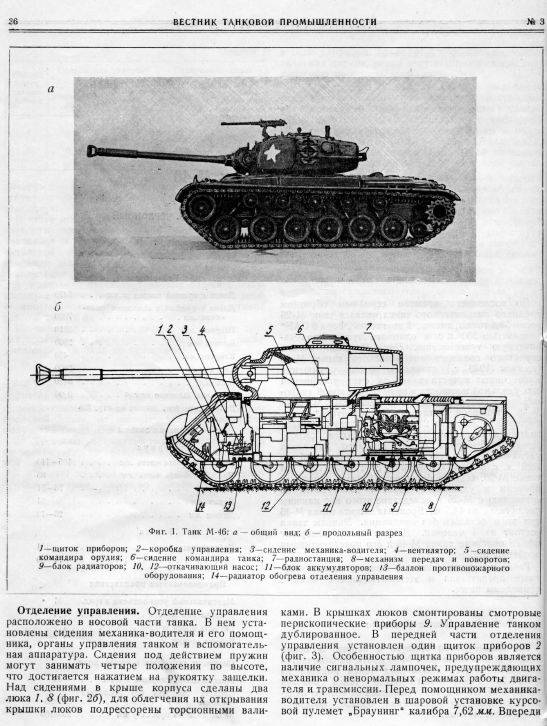 The authors of the Bulletin “dissect” the M-46 captured in Korea.
Naturally, the armored protection of the tank, evaluated in comparison with the M-26 Pershing, did not go unnoticed. Rate the reports in one of the articles of the "Bulletin":

“The main alloying elements of the armor of the American M-26 and M-46 tanks are molybdenum and manganese. During shelling, American armor shows good viscosity: there were no cracks, splits and spalls. Welded joints of the armored parts of the hulls of the M-26 and M-46 tanks are characterized by considerable strength during shelling. Despite the large shell load, the formation of cracks in the welds was not observed. Welded seams of American tanks are multi-roll. For welding, the edges of the parts to be joined were subjected to “K” and “X” -shaped cuts with cutting angles close to 45 degrees. In this case, the gaps between the mating parts vary from 7 mm to 22 mm, depending on the thickness of the parts. Welding of the main armored parts of American tanks was carried out by an austenitic electrode wire with a significant amount of molybdenum. The applied thickness of the armor, the configuration of cast parts, especially the turret, as well as the structural arrangement of the parts are not optimal. "
But the ejection device M-46 has earned high praise from domestic engineers. According to the most preliminary data, such a system after a shot reduced the gas contamination of the fighting compartment by 2–3 times. Researchers from Kubinka unambiguously hinted to domestic designers that "this principle, combined with the ventilation system of powder gases, will certainly reduce the percentage of concentration of powder gases in the fighting compartment of the tank, thereby reducing their harmful effect on the condition of the crew." We must pay tribute to the designers: they read the Bulletin and understood the hint.

Ctrl Enter
Noticed oshЫbku Highlight text and press. Ctrl + Enter
We are
Camouflage tanks of the Red Army westwardArmored vehicles of Germany in the Second World War. Part of 2. The evolution of the organizational forms, the composition of the Wehrmacht Panzervawe and the SS troops
Military Reviewin Yandex News
Military Reviewin Google News
14 comments
Information
Dear reader, to leave comments on the publication, you must to register.