Our tank panopticon: T-34, which were and which could be

Tank T-34-76 arr. 1940 year. Here with such tanks it all started ... A short cannon (so as not to interfere with breaking the walls!), a double tower with one hatch for two. His very first and almost early design, apart from experienced images

About tanks with love. Today we again go to our tank panopticon, but the goal of our "trip" will be only one tank. But what a! Our T-34 is a tank about which probably everyone has heard, and without mention of which it is not enough for one book about the Second World War, neither here, nor in the West. “Their T-34 was the best in the world!” This was not said by anyone, but by a German general. And this is probably the most serious praise of the tank. 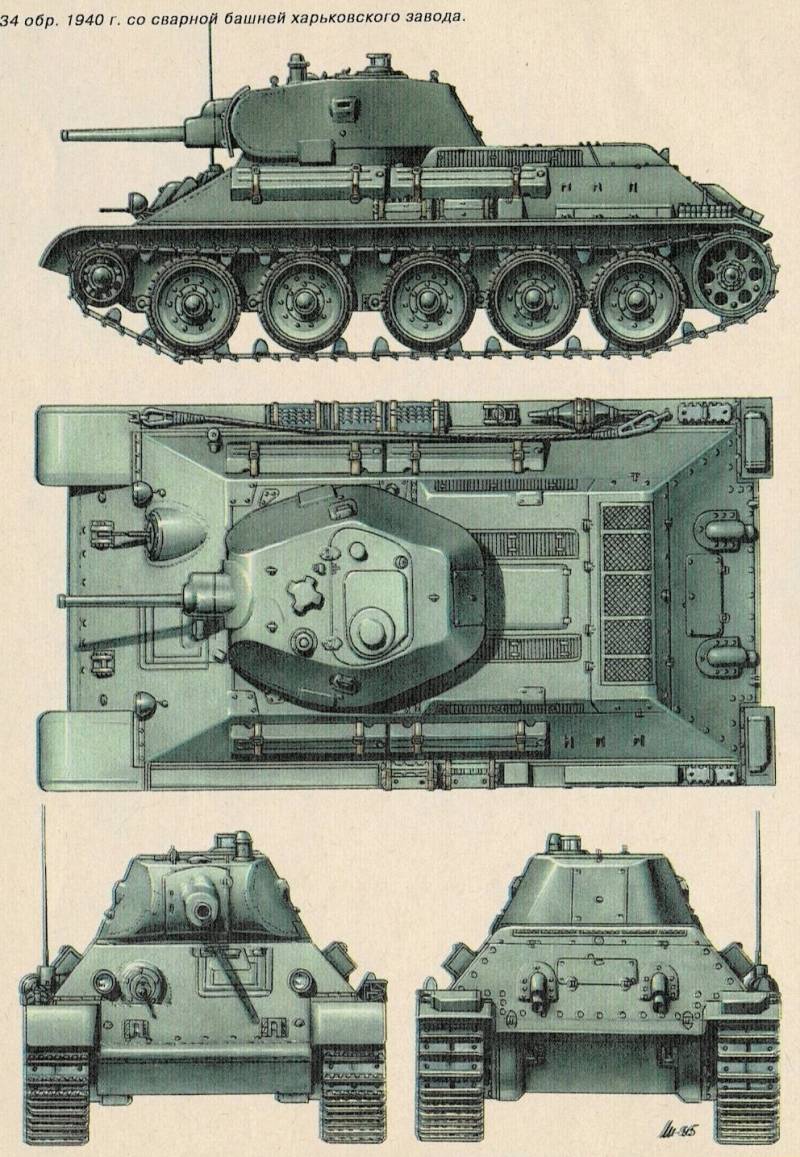 And so he looked from all sides. Fig. M. Shmitova 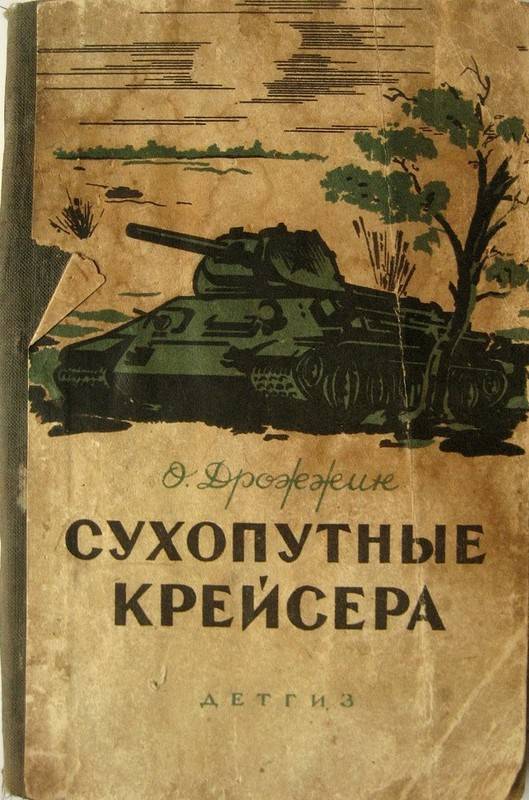 Despite the war, very interesting books were published in the USSR. In particular, the book of Drozhin "Land Cruisers." How is she good? After all, it seems that they didn’t write about much then ... It’s good that it was written, like many Soviet books for young people, in a beautiful, understandable and accessible language. So these books were clear to the student and interesting to the academician! Therefore, I will give advice to those who decide to write about tanks today: start by reading the books of your predecessors, and this is a must! 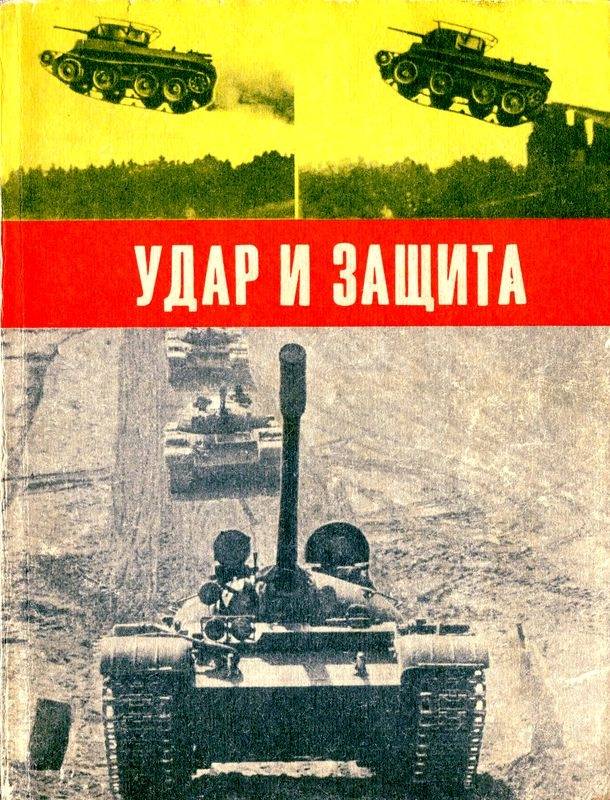 But this is Beskurnikov’s book. There is one funny blunder there, but we’ll somehow tell about it in another article 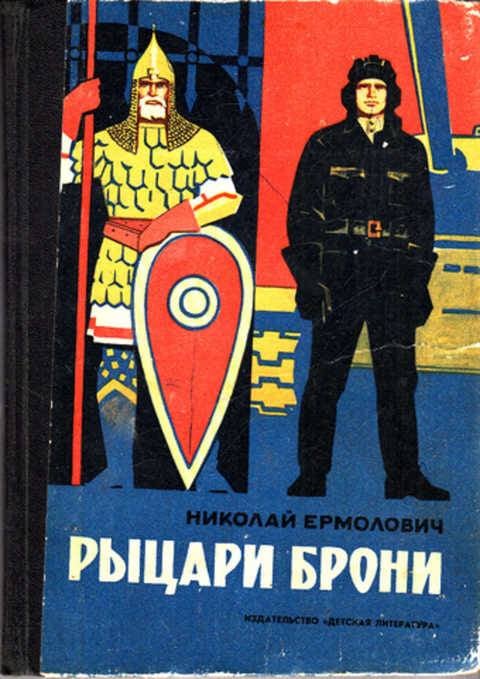 The book “Knights of Armor” is interesting in that it tells about the profession of tank test
I found out about this tank for a long time. In Soviet times, his images and sections were in the magazine "Young Technician", and "Model Designer," and "Science and Life", and even ... in the magazine "Murzilka". It was told about him both in the book of O. Drozhzhin “Land cruisers” (1942), and in the book of A. Beskurnikov “Strike and defense” (1974), and in the book of N. Ermolovich “Knights of armor” (1976 ), and by I. Shmelev “Tanks in battle” (1984), and, of course, in his “Stories tanka (1916-1996) ”(1996). And these are only the most popular publications, so to speak. And after all, there were special monographs (beautifully published) by a number of other, very competent authors, such as M. Kolomiets, the author of the book “T-34. The First Complete Encyclopedia ”(2013). 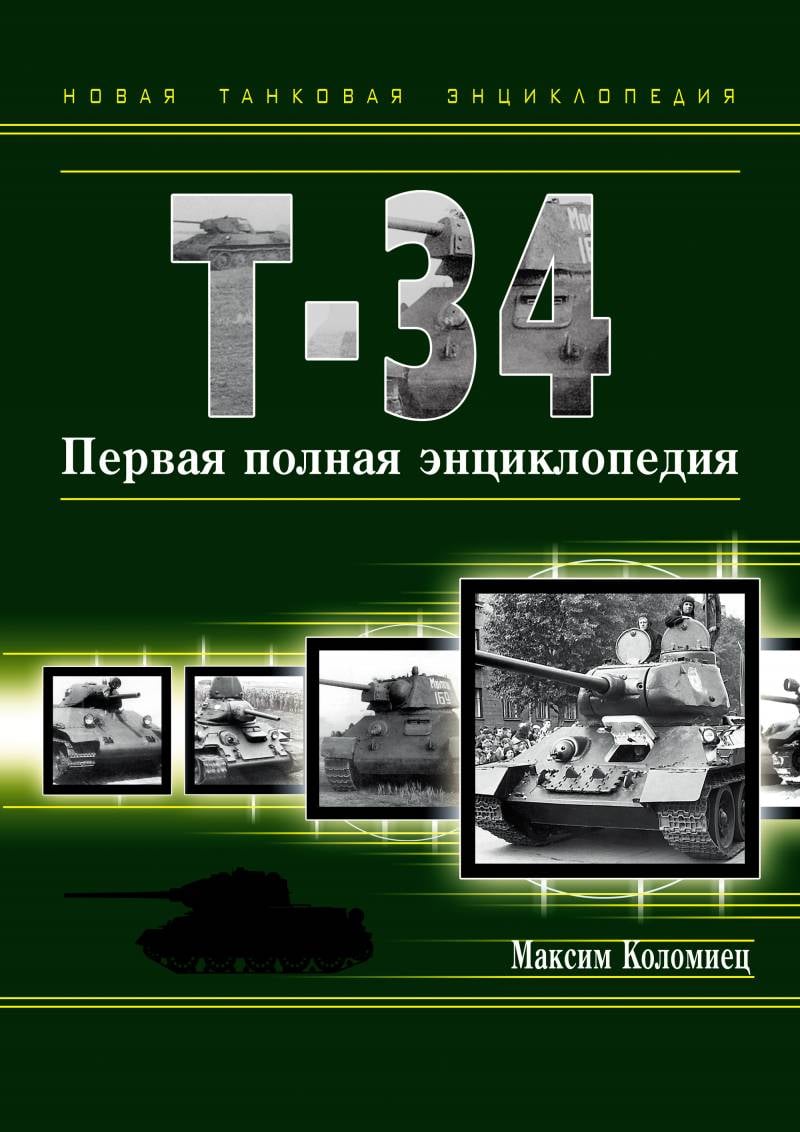 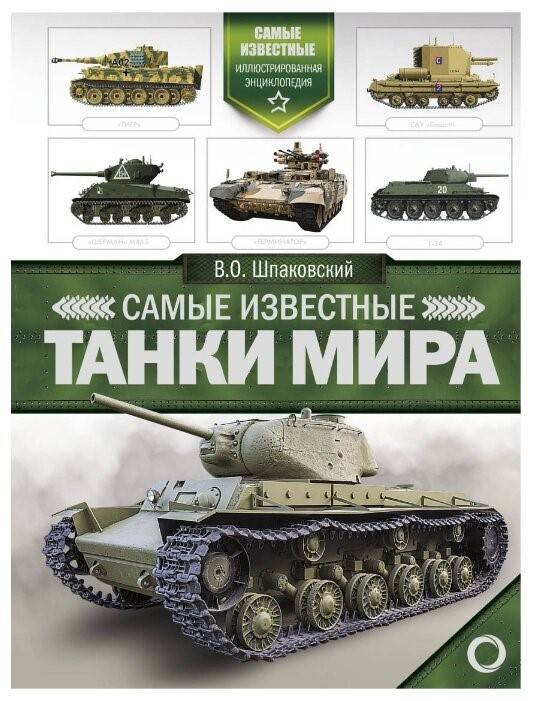 This book is also framed with photographs and drawings, many of which are taken from our “tank panopticon”. 2017 Edition 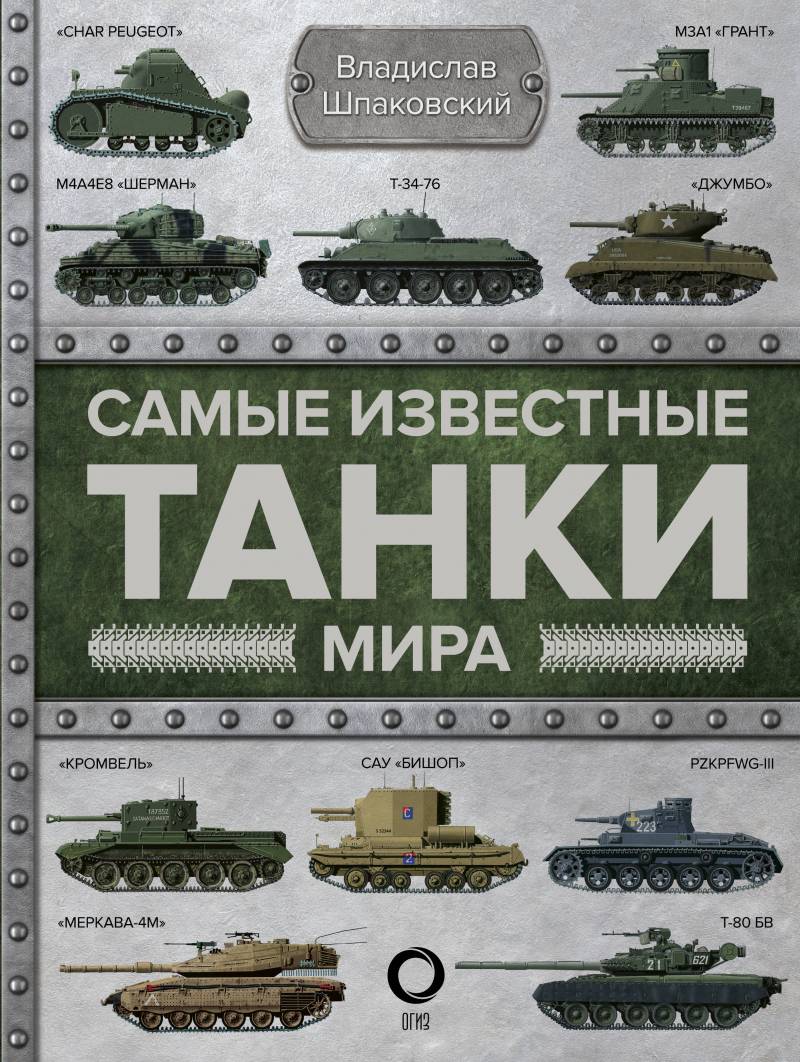 Well, this is an example of how books should not be reprinted. The same publishing house, but the year 2019 ... Look carefully at the name of the author. Moreover, inside the book, in the annotation, everything is correct. And now we are still wondering why Hitler soldiers flaunted on our posters dedicated to the 75th anniversary of the Victory! Over time, many show a disregard ... Hence, the photos are not the same, and the names too 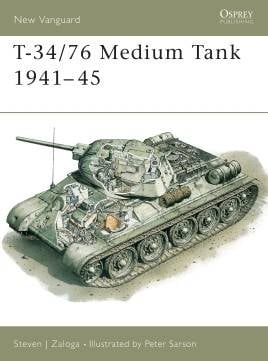 Books about him were published abroad. For example, the renowned American BTT specialist Stephen Zaloga published a book in the New Vanguard series in 1994, T-34/76 Medium Tank 1941–45 (New Vanguatd 9), in the Osprey Publishing House. followed by: “T-34-85 Medium Tank” (New Vanguatd 20)
In a word, there are so many books about the T-34, including even his participation in the war in Korea and in the conflict in Croatia, that it’s just right to write a full-fledged historiographic review about them, but it is unlikely that anyone will need it today. 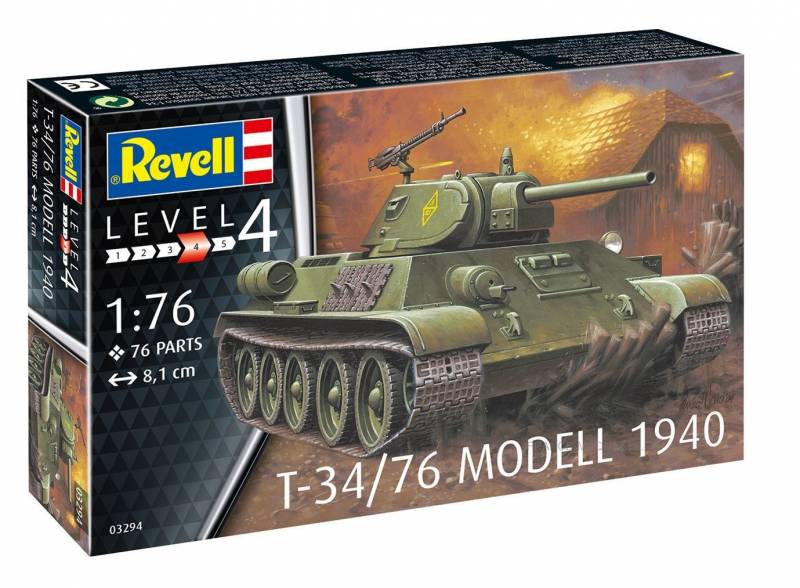 Model of Revell firm 1:76
For modelers, the T-34 models are produced by the most famous model firms, including Tamiya, Revell and our Star, of course. And on a variety of scales. From 1: 100 to 1:10 and 1: 6! That is, information on this tank is very much, and the most diverse. 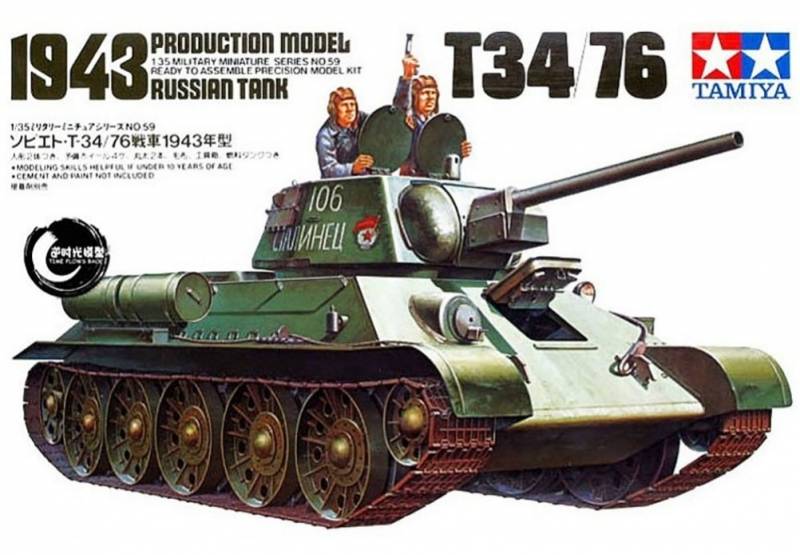 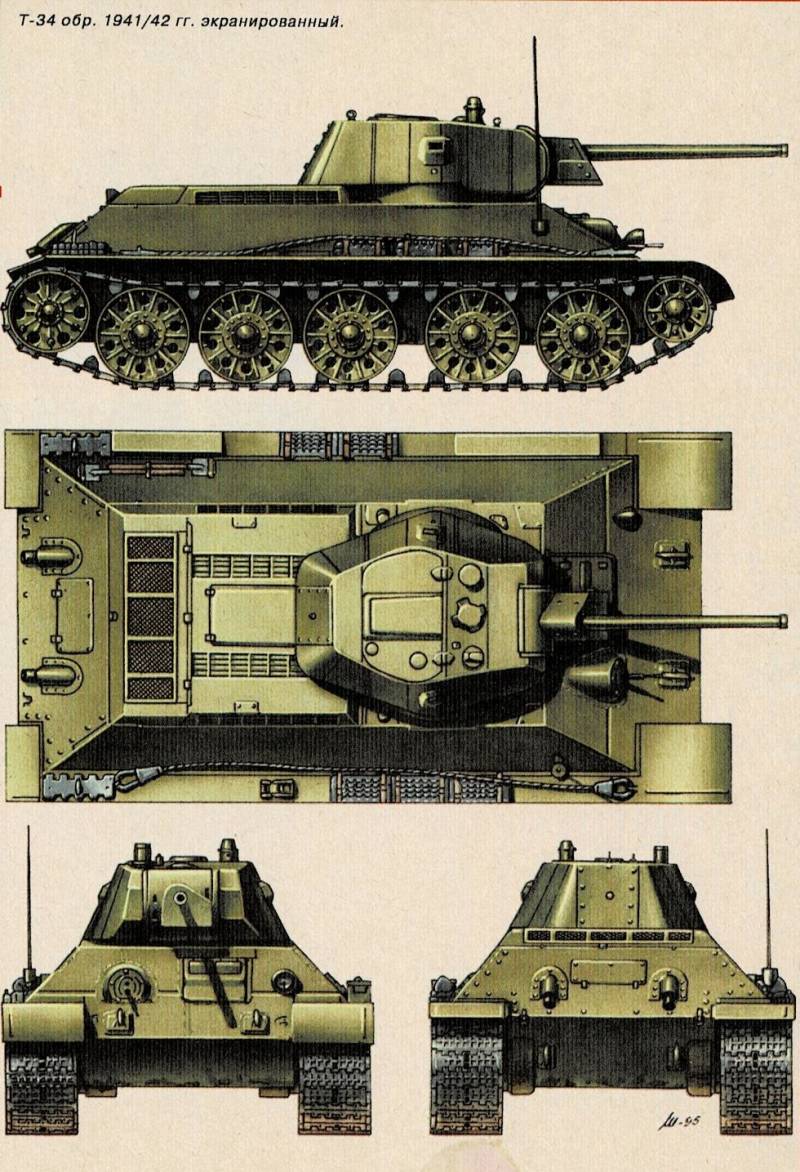 In 1942, many tanks received not only additional tower reservations, which, as it turned out, were most often hit by German shells, but also wheels without a rubber coating, since the rubber in the USSR was sorely lacking. The rumble produced by these tanks was heard from afar ... However, they fought! Fig. Shmitova
But among all this undoubted wealth there is a place for our collection.

Note that during the war years, technology improved very quickly. Compare the T-34 mod. 40 years old and this one - 1942. The hull remained virtually unchanged, but a new hexagonal tower appeared on the tank, nicknamed the “nut” (it was a cast and welded version, but recently there was an excellent series of articles about welding tank armor on the VO!). For two round sunroofs, the Germans nicknamed him “Mickey Mouse”

The 43-year-old model received the commander’s turret, although there were still two people in the tower. But at least on the march, the machine commander could now have a circular view 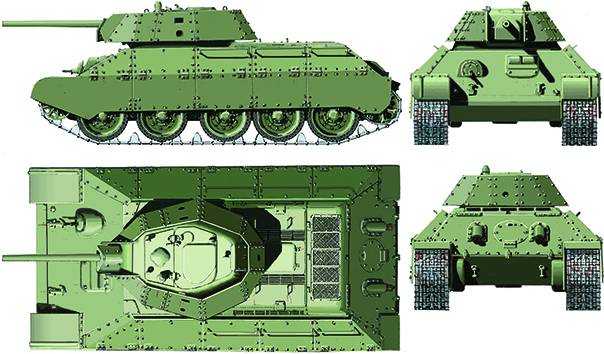 At the very beginning of the war it became clear that the T-34's armor was still thin and it would be nice to increase its thickness. A flood of letters with suggestions on how best to do this poured into the relevant authorities. Work on additional reservations began at the factories. It has been observed that armor that is located at some distance from the main armor protects better. Here is one of these projects of a tank with spaced armor

The Germans, who captured many T-34 tanks, also used them and also strengthened their armor by shielding 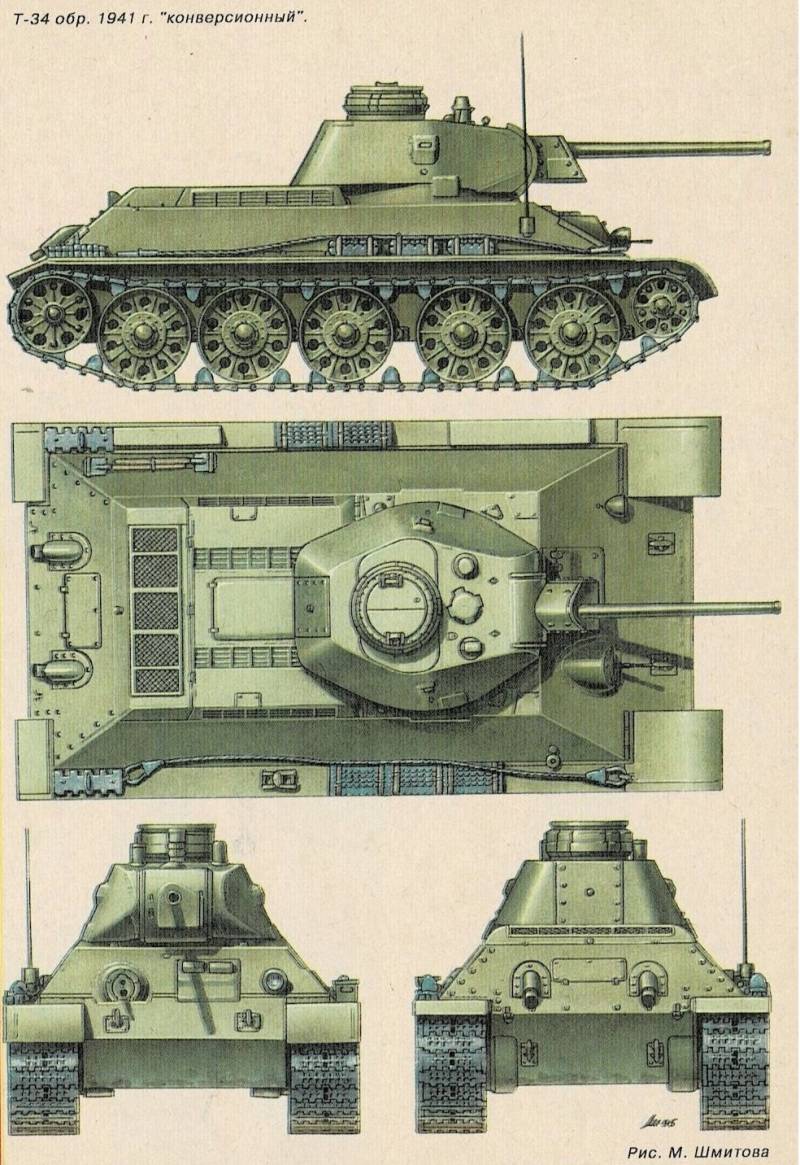 On some tanks, they installed commander's turrets from the T-III and T-IV tanks. Fig. M. Shmitova 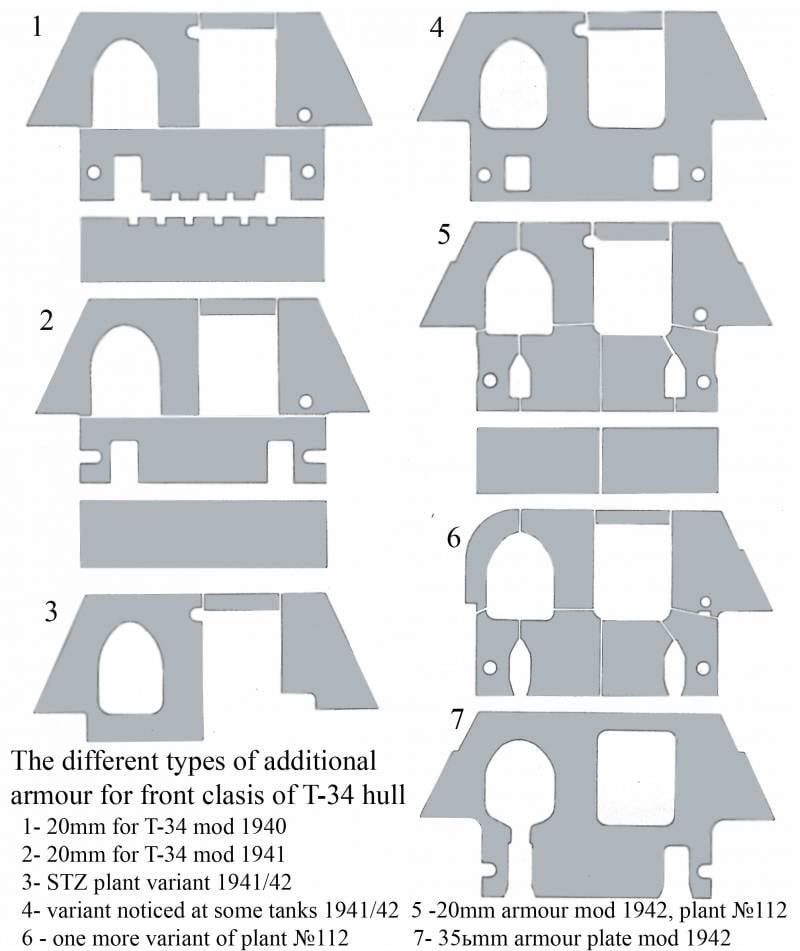 Options for cutting armor plates of additional armoring of T-34 tanks in 1941-1942.
However, in the end, the simpler scheme of additional reservation of the tank won by welding on the frontal reservation of the body of additional plates of armor. It is known that the thickness of the armor on the frontal projection was 45 mm. Thus, having welded a sheet with a thickness of only 10 mm, we get a total thickness of 55 mm, and if 15, then in the end there will be all 60 (booking an experimental T-46-5 tank). Well, a 20-mm plate altogether gave 75 mm, that is, the T-34 reservation on this indicator correlated with the reservation of the KV tank. Not always, however, the factories had armor plates of the required thickness, and then the sandwich armor was invented: 10 + 5 + 5 + 45 - that’s 75 mm. Even armor sheets 35 mm thick were put, that is, such a tank received 80 mm frontal armor! True, such a reservation increased weight, pressure on the front rollers and suspension springs, but, nevertheless, put up with it. And the life span of our tanks on the battlefield was so small that the suspension did not have time to wear out! 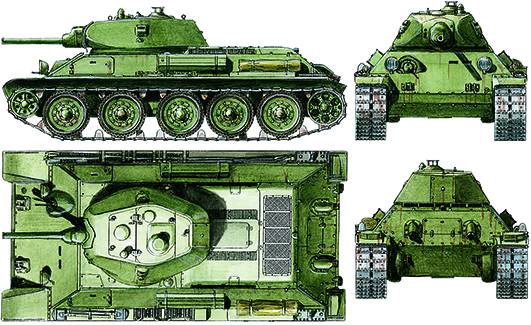 T-34 with hatches on the sides
But in this figure we see four projections of the T-34 of an not quite ordinary form. It seems to be a tank of 1941, but some of them are not like that. And this, so to speak, is a tank of the IF brand (“If ...”), which represents the author’s imagination on improving the original model. Many tankers complained that the hatch on the front armored plate was a bad decision. Often the tank was hit by shells precisely through the hatch, especially of large caliber. One possible solution to this problem could be to use a solid armor plate without a cut for the hatch, but only with two narrow slots (a tradition of those years!) For observation and with three periscopes on the roof of the hull. But hatches could well be placed on the sides of the hull, as the British did on many of their tanks, in particular, on the Valentine tank. 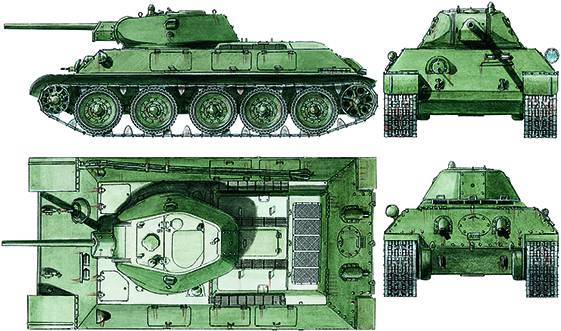 T-34 1941 model with sunroofs
But the T-34IF tank with a modified slope of the frontal armor and an increased body width with a reverse inclination of the side sheets of the body armor, covered with another layer of thinner armor with hatches for inventory in the area of ​​the fenders. Such a scheme would allow moving the tower a little back and placing hatches, a driver and a radio operator-gunner on the roof of the building left and right. Which, in principle, was then done on the T-44 tank, although the side armor sheets did not have a slope 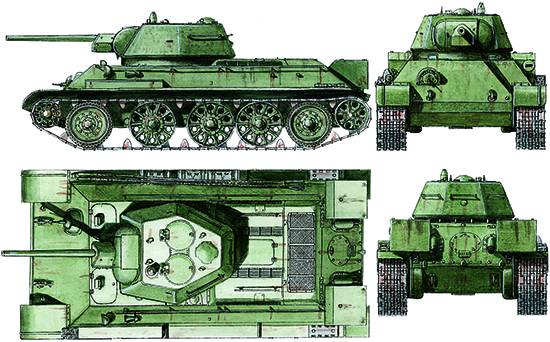 T-34 1942 model with sunroofs
In this figure, the width of the tank hull is left unchanged, but the slope of the front hull armor plate is changed. Accordingly, this would make it possible to mark both hatches on the roof of the hull, that is, each crew member to provide their own hatch. Since the inclination of the armor would be reduced, to compensate for this drawback could be an increase in the thickness of the armor plate to 52 mm This is exactly the slope of the frontal armor that was on the American Sherman tanks (51/56 °). That is, the Americans considered such armor for their medium tank to be quite sufficient. It would be no worse than protecting our tank, but the convenience of the driver and the arrow on it would increase in a very noticeable way.

It should be borne in mind that the analysis of damage to the frontal armor showed that its inclination leads to ricochet of shells only if the caliber of the shell is not more than the thickness of the armor, that is, for German guns this is a maximum of 37 and 50 mm. But with an increase in caliber, the probability of a projectile ricochet from an inclined sheet decreases very quickly. For shells of 88 mm caliber, the inclined armor of the T-34 hull already had almost no effect on its armor resistance. On the other hand, a sheet of armor located vertically at an angle of 60 ° is almost equal to a sheet of armor of double thickness: 1 / cos (60 °) = 2, which makes it possible to rationally cover the internal volume with armor and reduce the total weight of the armor on the tank. That is, the less the armor is tilted, the better, in principle, but a 52 ° tilt with a thickness of 52 mm can be considered almost optimal. And besides, hatches from above!

T-34-85 with a gun D5T
It is known that during the war two versions of the T-34/85 tank were produced: with an 85-mm D-5T gun (early version) and the same-sized ZIS-S-53 gun, which was considered more convenient to use and technologically advanced in production . But since the D-5T was ready earlier, they started to put it on the tanks first. 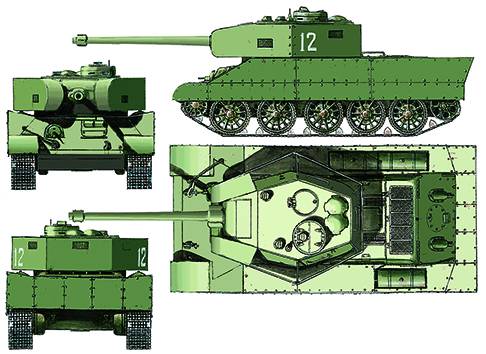 T-34-85 with spaced reservation
The use of cumulative ammunition by the Germans at the end of the war again led to the need to equip tanks with spaced armor. Here is one of the projects of such an additional reservation. But, as always, the projects were in one place, and the tanks in another, so our tankers had to “book” their tanks with bed nets and garden bars. There are photos in which such tanks can be seen, but in our panopticon their drawings, unfortunately, are absent.

PS The site administration and the author express sincere gratitude to A. Sheps, the author of the Panopticon illustrations, and also to M. Shmitov for the BTT drawings.

Ctrl Enter
Noticed oshЫbku Highlight text and press. Ctrl + Enter
We are
Is the "old" well forgotten to become the "new"? Part-2. At the call of honor and dutyThe fire control devices of the Soviet and German tanks of the Second World War. Myths and Reality
Military Reviewin Yandex News
Military Reviewin Google News
131 comment
Information
Dear reader, to leave comments on the publication, you must sign in.