By the way, the first project tank A7V did not provide for cannon weapons at all. Only a machine gun!

About tanks with love. The first material of a new cycle about tanks VO readers liked, and they expressed many wishes that it would be continued, and soon. Here, however, not only everything depends on me, but also on the wonderful artist A. Sheps, but fortunately both he and I have enough materials for our "panopticon". It is only necessary to choose ... But here the problem arises: from what principle should one proceed? Take beautifully painted serial tanks? Armored wonders? “Terrifying monsters” or, on the contrary, go through countries and continents, as it was, for example, in the Mauser company’s cycle about rifles (“On Mausers with Love”)? Let's do it this way: consider today the heaviest tanks that have ever been created, both in metal and in drawings. Again, we won’t be able to review them all - there’s simply not enough volume, and not all of them have been drawn. But there is something, and today we are going to consider them. And believe me, this will really be the real “goblin reserve”.

Well, we start with the German tanks, which appeared during the First World War in spite of the British cars. And everyone knows that the tactical and technical task for any new type of weaponry is given out to the engineers by the military. What they need, then they order. Only occasionally do engineers manage to take the initiative in this matter. And even less often, this initiative is approved by the authorities in uniform. And here, in relation to the development of tanks in Germany, the question immediately arises: why did the Germans need them at all?

With the British, everything is simple. Their military needed a “machine gun fighter” and a barbed wire breaker. Hence the high caterpillar rim, weapons in sponsons, low speed. But why did the Germans need a tank? Crush the wire? Its design did not allow this! Destroy British tanks? But then why put the gun in the nose? Indeed, with such a placement, any, even the smallest turn of the tank hull led to the fact that the shooter from the cannon lost its target. And again ... the Nordenfeld 57-mm cannon with a truncated barrel is not serious. Well, a lot of machine guns - to mow the British. So, because of its insignificant cross-country ability, the A7V also could not do this successfully. But the goal was good for the enemy artillerymen.

Project A7V with 77mm infantry gun
There was a project to install on this tank instead of the 57-mm gun a very good German 77-mm infantry gun. The trunk was shortened, but he did not need a long trunk. But it could shoot all kinds of army grenades and shrapnel, so this tank would have no problems with ammunition. Moreover, any English tank could be destroyed by the first hit of the shell of this gun. And it could be a high-explosive shell, or even shrapnel put “on strike”. But the army categorically refused to give these guns to the needs of the tankers, and so the 57 mm serf (caponier) guns that nobody needed were brought to German tanks. 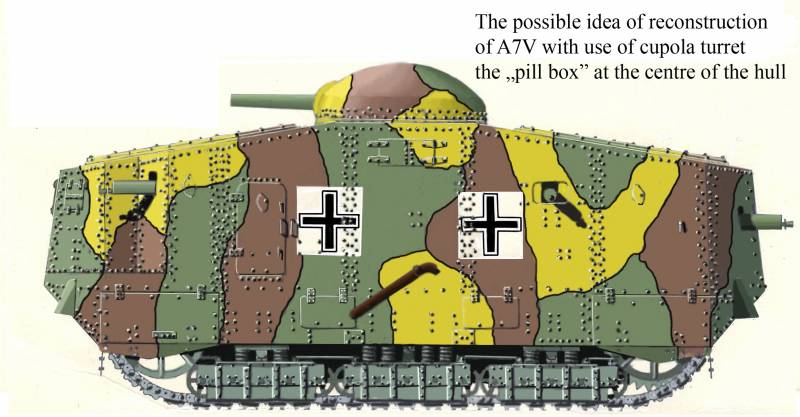 Hypothetical A7V with a pill box tower (“pill box”). But even this gun could be used with greater efficiency if it was located in the center of the tank in the tower. And even before the war the Germans had such armored towers with “pill boxing” cannons, but only no one, neither the military nor the engineers, had the idea to put this ready-made tank towers on the tracks! And in the end, Germany was defeated by "General Tank"!
Let's move now to the beginning of the 30s. IN USSR. And let's look at this top secret (at one time) development of the T-39 tank. It is made in the form of a reduced wooden layout. That's where the designers ’fantasy came true: the first option (1) - four turrets, four cannons, two 107 mm and two 45 mm, and four more caterpillar tracks; the second option (2) - four towers, three 45-mm guns, one 152-mm howitzer and one flamethrower; The third option (3) is similar to the second, but in the main tower there is a 152-mm gun mod. 1910/1930 There was also such an option in which two 107-mm guns were installed at once in the rear large tower! The tank came out even according to the first estimates so expensive (three million rubles) that they decided to abandon it in favor of more cheaper tanks. For example, with this money you could buy nine BT-5! The weight of the monster reached 90 tons, the armor was supposed to have a thickness of 50-75 mm. 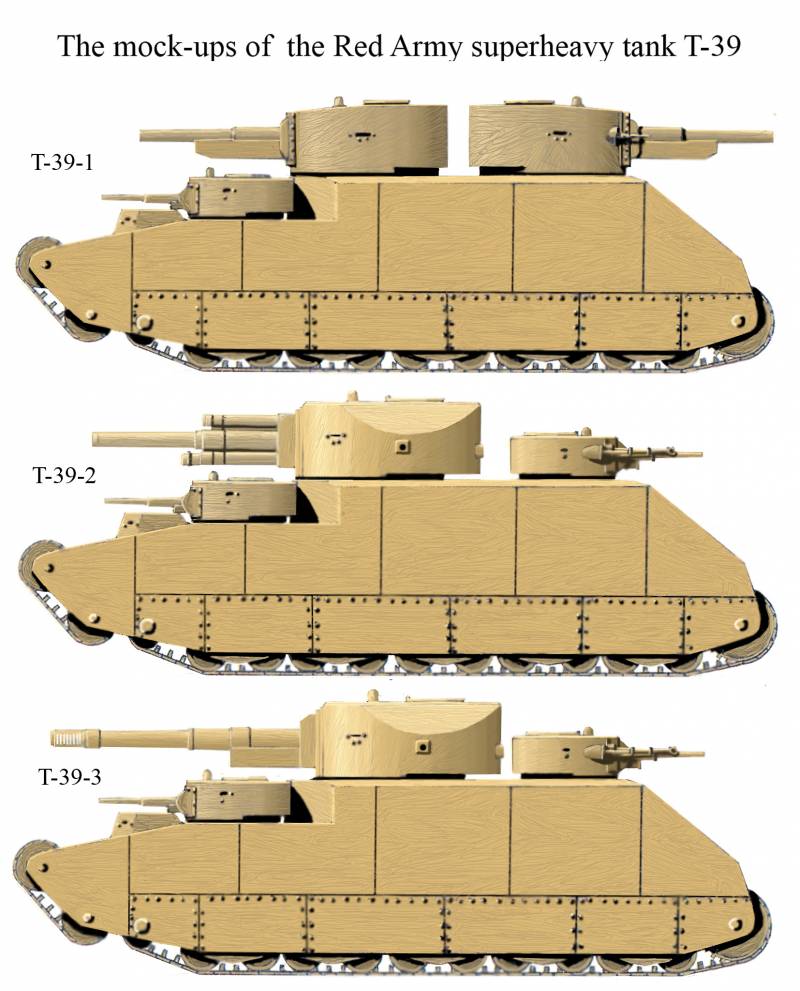 Here it is, T-39. Scale 1:10
And now in our “reserve” we have reached genuine “goblins” - German experimental tanks of the end of the war. In general, they were strange, these Germans. Like a bag from around the corner grabbed. There is no other way to explain this: a total war is going on, the Russians and the Allies are throwing real armored armada against the Wehrmacht, and they, instead of opposing their armadas with their armadas, that is, riveting them day and night with the forces of all you can strain, created a mass prototypes, they spent working time, raw materials, money on them, forced the draftsmen to draw, and the woodworkers to make their wooden models ... But it was necessary to improve only what was required, and use it as quickly as possible, and throw all your energy into it! And they? So they lost, and back in 1939, when they produced 200 tanks a month, and the USSR - 2000. And they themselves came out in 2000 only by 1944, so it is not surprising that they were gouged like a tortoise god.

Although no one argues: by the end of the war they thought up very good tanks. This is especially true for the “E” series - a series of tanks and self-propelled guns developed by several co-operating little-known enterprises. Their weight was supposed to be from 10 to 70 tons with the most advanced weapons.

For example, the E-75 tank was supposed to weigh 75 tons, and armed with a completely deadly 88-mm gun with a barrel length of 100 calibers! It is clear that it was not possible to build it. Managed to make only a few chassis

The Gerat 810 had an even more powerful 210 mm caliber gun. This is a machine for the Strugatsky brothers. Her place on the planet Saraksh. to follow the instructions: “Tanks in coastal defense against white submarines” 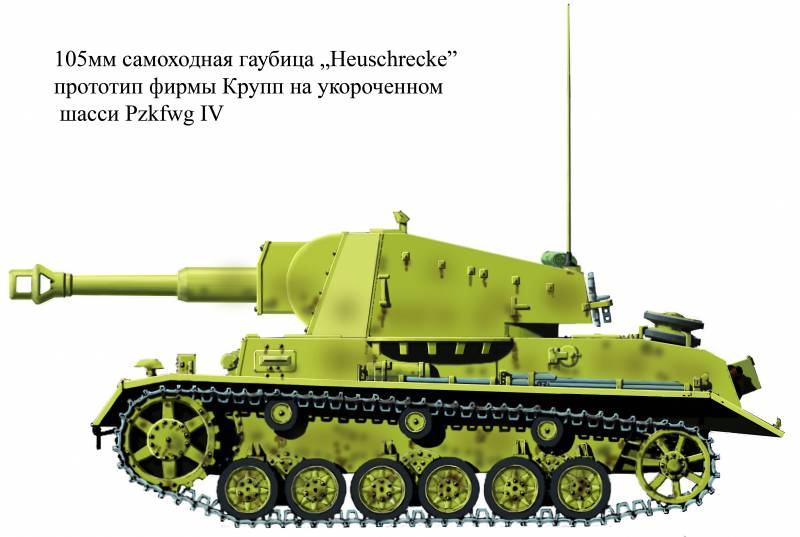 Another “end model”: the Krupp company shortened the base model of the chassis of the Pzkfwg IV tank and placed a turret open on top under a 105-mm howitzer. Well, it was necessary to “rivet” them! But neither the strength nor the materials for this was gone !!!

FV 214 "Conqueror" (from the English. "Conqueror") - the last British heavy tank, developed in 1949-1952 to confront the new Soviet heavy tanks. From 1955 to 1959, a total of 185 Konkarorov and 28 ARVs were produced on their chassis. Weight 65 tons, gun - 120 mm. By the way, here in Russia in Kubinka you can watch it live. But we didn’t steal it from them and this is not a trophy, but received it from the British on inter-museum exchange 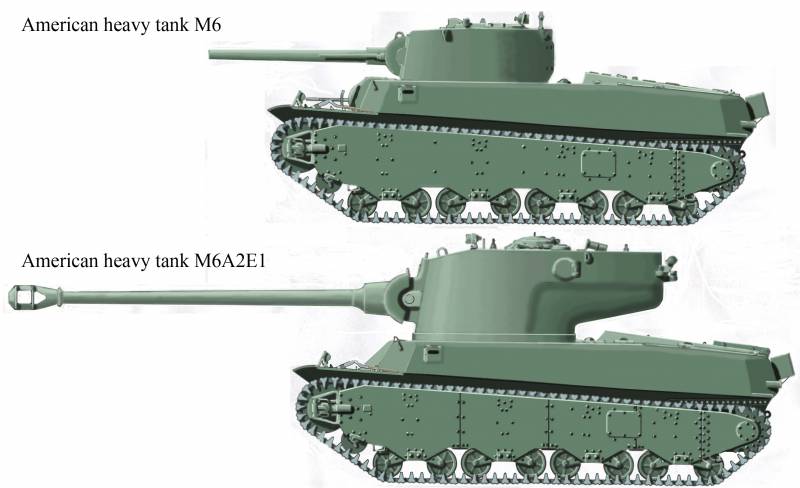 Not so long ago, there was an article on VO about the American M6 heavy tank. It was developed throughout the war, many experimental modifications were released, but they were not accepted into service. And why? Well, just look at him, I think. But on the other hand, its base was used to develop towers for other tanks and tank guns were also tested on it. There was also such a modification of the M6A2E1, designed to fight the “Royal Tiger” with the help of a 105-mm gun. But she didn’t go anywhere else.
Interesting developments, including in metal, were created by our Soviet designers. For example, they have long possessed the strange dream of unifying our heavy and medium tanks, that is, making them a kind of hybrid. And they even created it - KV-13, but only he was unsuccessful. There was an attempt to put the IS-1 tank on a five-wheeled chassis from the T-34. In the book of the Kirov factory "Without secrets and secrets" about all these developments is told very interestingly. However, in the end, they did not lead to anything. Heavy tanks remained heavy, and medium tanks remained medium!

IS-1E (1944)
Well, at the end - the IF tank (If tank), the shortened and "crazy" Kirov QMS. Everyone knows, everyone remembers and, on occasion, cites how J. Y. Kotin presented Stalin a model of the SMK tank, on which there were three towers, which corresponded to the assignment, but they were made removable. And so Stalin removed the back tower, asked how much he removed, and suggested using this weight to strengthen armor. And Kotin did just that, and so he “spent” Stalin. But why then did Stalin remove only one tower? Why not two? Could not decide to take too radical a step? But Kotin still managed to make it. He took off the second tower, and so the KV tank turned out! That is the legend. But how was it really? And most importantly, what could have happened if Stalin had nevertheless removed not one, but two towers, and at the same time would have ordered the QMS to be shortened, which is quite logical. As a result, such a tank could have turned out, and quite good!

This is how a heavy tank based on the QMS might look like ...
Today, our visit to our "tank panopticon" is completed. But there will be new ones ahead!

Ctrl Enter
Noticed oshЫbku Highlight text and press. Ctrl + Enter
We are
Is the "old" well forgotten to become the "new"? Part-2. At the call of honor and dutyThe fire control devices of the Soviet and German tanks of the Second World War. Myths and Reality
Military Reviewin Yandex News
Military Reviewin Google News
147 comments
Information
Dear reader, to leave comments on the publication, you must sign in.