For 9 liters of vodka. How the Bolsheviks destroyed the Spassky Cathedral 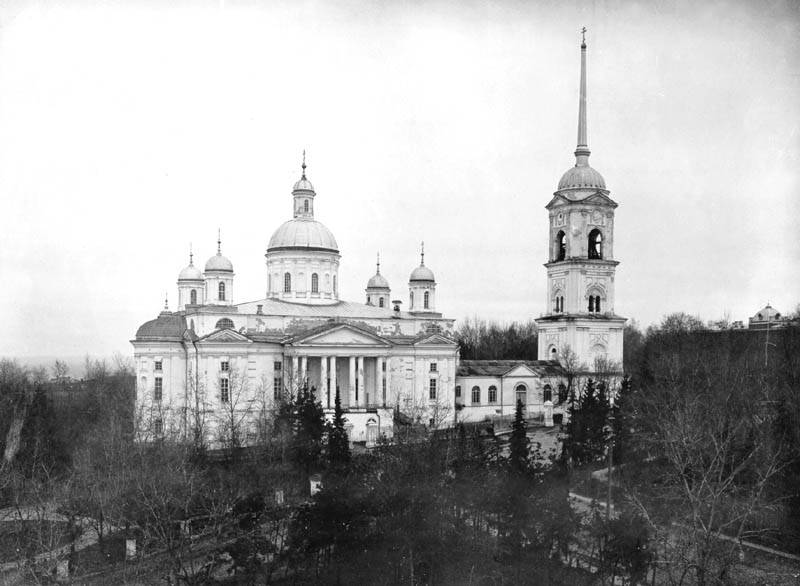 Spassky Cathedral in Penza at the end of the XNUMXth century

“Lying is the religion of slaves and masters ... Truth is the god of a free man!”
Maksim Gorky. At the bottom

History and documents. A cathedral is being built in the center of Penza. Moreover, the construction has entered the final phase - the interior is being decorated with marble. Outside, everything is finished. And the surrounding temple buildings, and bell towers, and the square, and porches. The monument to Karl Marx, standing on the square, was found a new place nearby. They didn’t break it. Moreover, the cathedral is being built on an old site. He has already been here. Moreover, it was built a long time ago. Construction took place in the years 1790-1824 and ended with the construction of the most grandiose and spectacular building in Penza - the Spassky Cathedral, after which the area became known as the Cathedral. In 1923, the Spassky Cathedral was closed, the following year it was given over to the archives, and the square was called Soviet. In 1934, the cathedral was blown up. The destruction of the Spassky Cathedral in Penza is one of the most disgusting events in the history of Penza, and today we’ll talk about it. 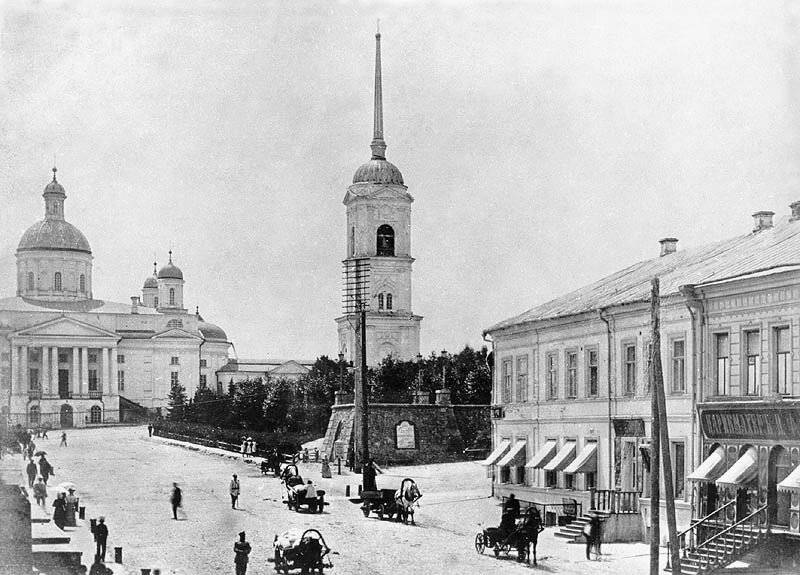 Moscow Street, the cathedral and the pedestal under the monument to Tsar Alexander the Liberator, which was never installed. Photograph of the beginning of the century
But the story will have to start not with the history of the cathedral, but again with archival documents. Working in the Penza City Archive, I came across a curious historical document. It can be said, completely unique - the Penza newspaper "Voice of the prisoner." How many years she graduated, when it began to graduate and when it ended, until it was not possible to find out. But what matters most is the very fact of publishing a printed newspaper in prison and, of course, its contents. This is the true spirit of the era. After all, these people sitting behind bars breathed the air of a completely new Russia. In many ways, they looked at life in a new way. That is, it is a very interesting source. However, an anti-religious topic drew my attention to the newspaper. I must say that in Penza in the 20s the “Union of Atheists” operated and the central newspapers “Atheist” and “Atheist at the Machine” were distributed, in short, there was enough anti-religious propaganda. Articles on anti-religious topics were regularly published in the newspaper “Working Penza”, and when believers installed a spotlight on the bell tower of the Peter and Paul Church, to light up Easter night, the newspaper called it “unheard of arrogance”. And now it turned out that the newspaper “The Voice of the Prisoner” published materials on anti-religious topics, moreover, written by the prisoners themselves. 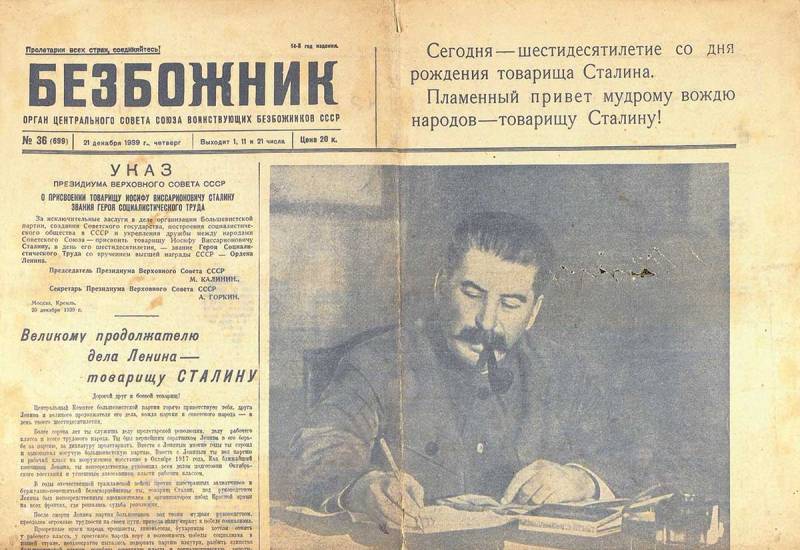 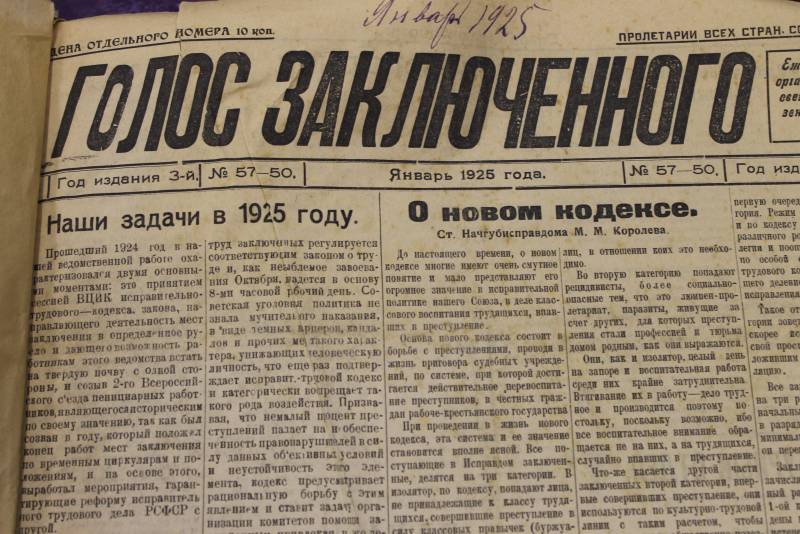 The Voice of the Prisoner
It was then that it occurred to me to look at what was written in this newspaper about the explosion of the Spassky Cathedral. After all, it was an event! Not that there was some kind of searchlight there for Easter ... And also to see how it was reflected in the documents of the city committee of the CPSU (b). I looked at the local history materials and ran into the first difficulty. Nowhere was it indicated when the cathedral was blown up. In 1934, yes! But when exactly? I went to the public relations department of the Penza Patriarchate, introduced myself, explained what and why, and they told me that the cathedral was blown up in August, but it is not known what date. 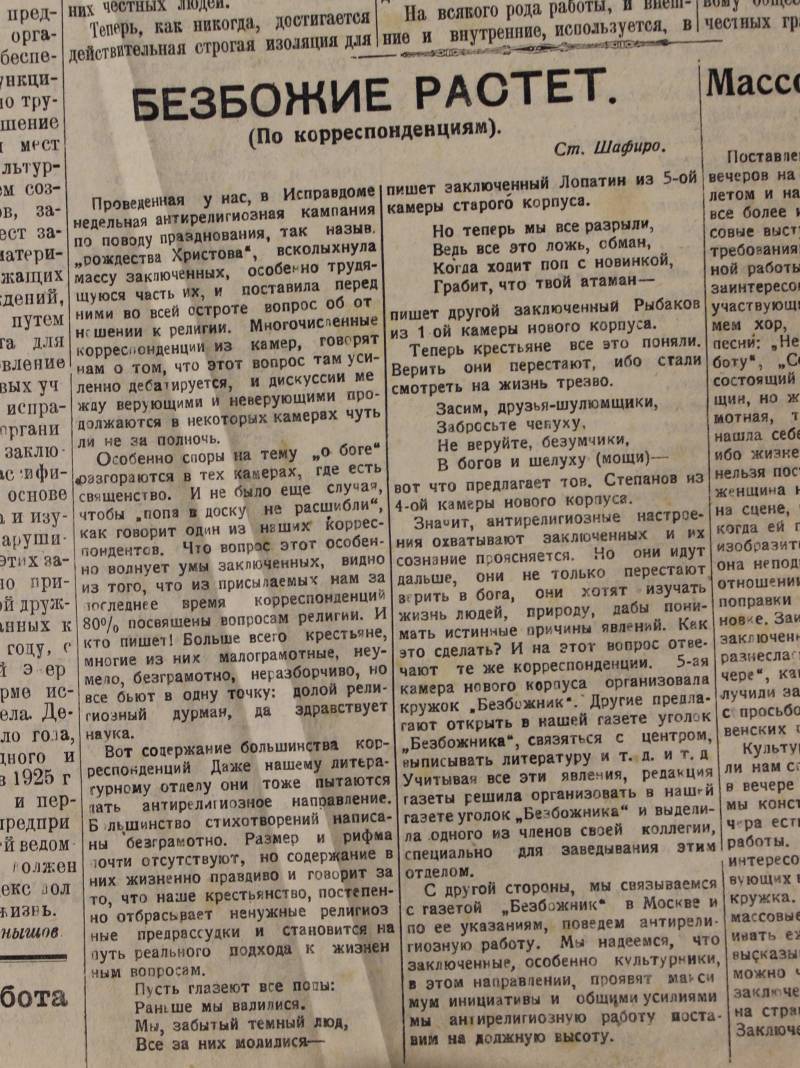 Atheism then grew even in prisons!
And how do you command me to understand? This is not an old water pump, which they took and demolished - this is a cathedral in the city center, and a huge building. The explosion of the cathedral (“an enterprise producing opium for the people”) is an event of a grandiose scale! And neither the day nor time of this action is known. Here's how: cooked and hid the spoons! You cannot say otherwise. 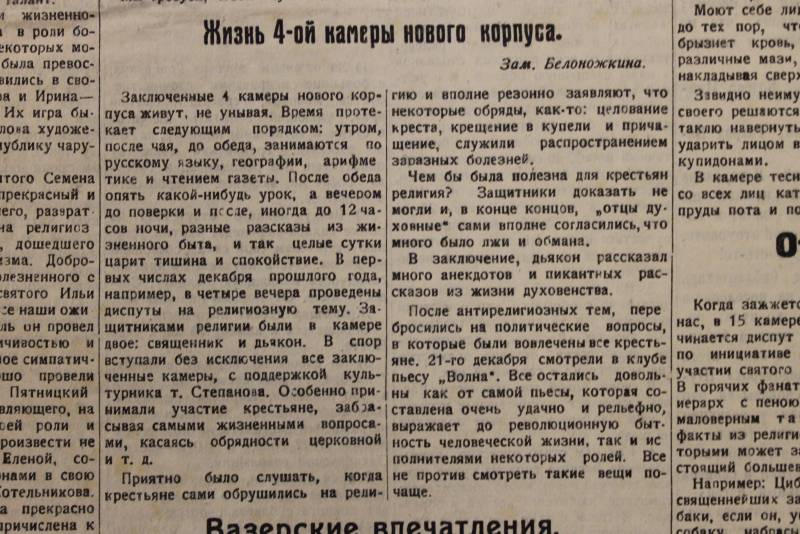 In the cell, the priest and the deacon. For what, interesting?
Well, well, at least a month to find out. He ordered "Work Penza" for 1934, flipped through all the numbers for August. It's empty! About the explosion of the cathedral NOTHING. As if he was not there. 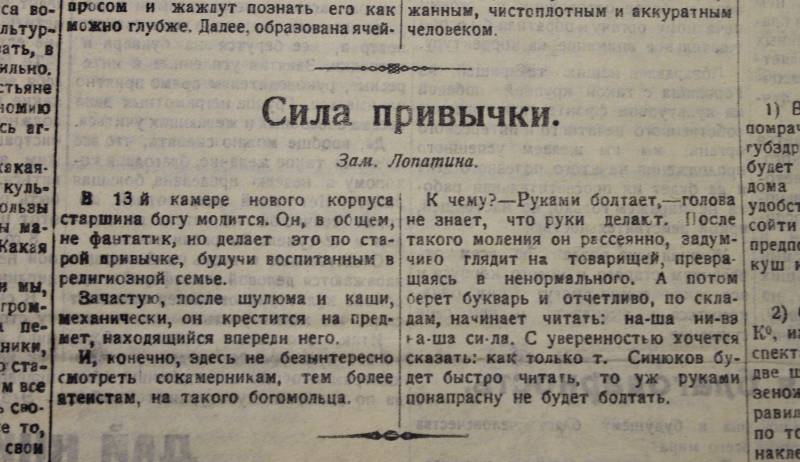 "Religious foreman"
Well, I went to the party archive. He raised the materials for 1934. It's empty. They discuss thieves, robbers of public property, various other issues. But no one raised the issue of the explosion of the cathedral and during the whole year it was not discussed at the level of the city committee (there was no regional committee then, Penza entered the Tambov region). Where did the explosive command come from? Where did the explosives come from, who was laying it? 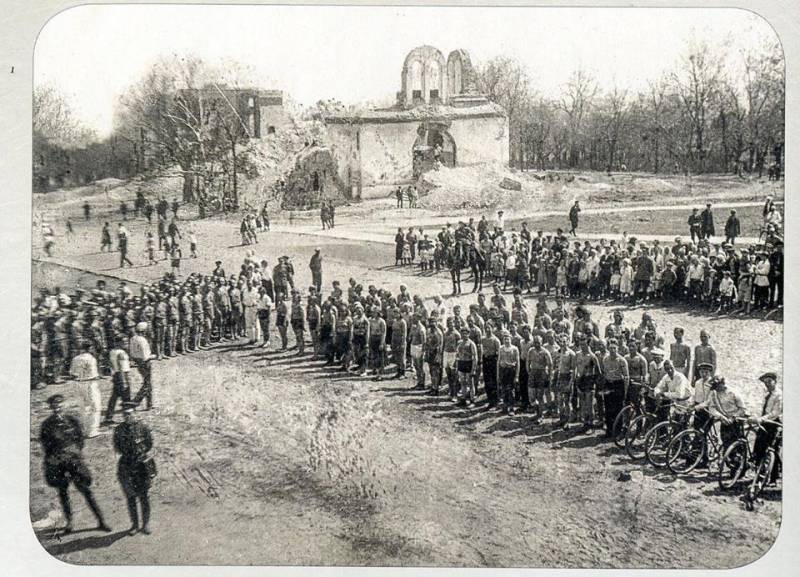 The area after the explosion of the cathedral. It hosts a gathering of cyclists!
But most importantly - why did not the newspaper report this? Since we are fighting religion, this is an excellent occasion for you to write that we, the Bolsheviks, irreconcilable fighters against religious dope, successively realizing the ideas of Marx - Lenin - Stalin, destroy this stronghold of obscurantism, and let the dawn of reason shine on Penza! Well, something like that ... But no, everything was done secretly, thieves ... 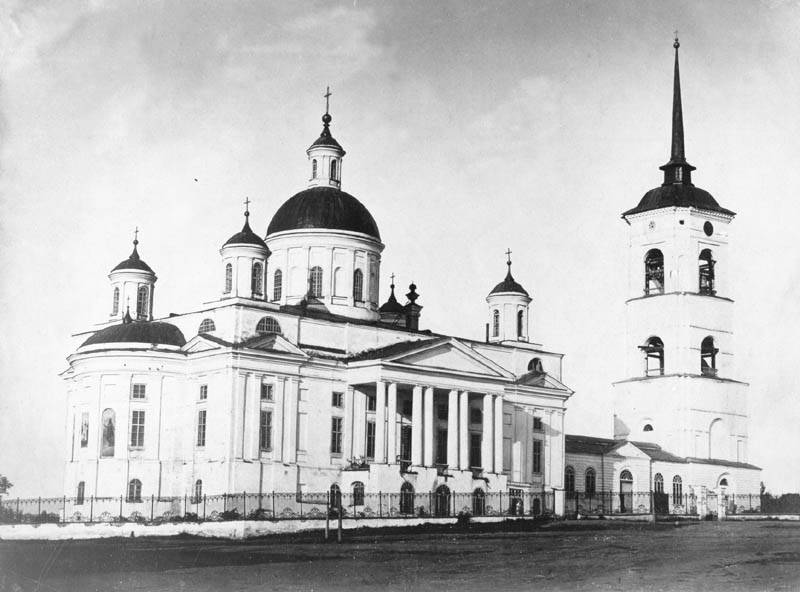 So he was at the beginning of the XX century
The PR law is this: since there is no official information, it is replaced by rumors. And it is natural that after the explosion they didn’t talk about him. They survived in the memoirs of the Penza people to this day. They say that a lot of people came. But there were a lot of police. Therefore, people were silent. Most cried. First dismantled the bell. They removed the fasteners, and he remained hanging on one rope. All workers refused to do this. We started looking for a volunteer. One local alcoholic called out for three quarters of vodka (9 liters, not bad, however!). When the bell fell, it touched the ceiling, and there was such a loud bang that many people even got their ears closed. A drunkard fell unconscious, he was shell-shocked. And three days later he died!

Cathedral bombing brought cadets of the demolition school. For all cadets this was a shock, but for military people the order is an order, it is not supposed to discuss it. At the base of the cathedral, in the walls, which had a thickness of more than three meters, drilled pits and laid charges of ammonal. And the whole square was surrounded by police. The first explosion thundered, pits were knocked out, but the building could not be destroyed. The charges doubled, but that didn't help either. Only on the third attempt did the cathedral fall apart into huge boulders. They did not bother to remove them until 1947! And they were also undermined, the strength was masonry. 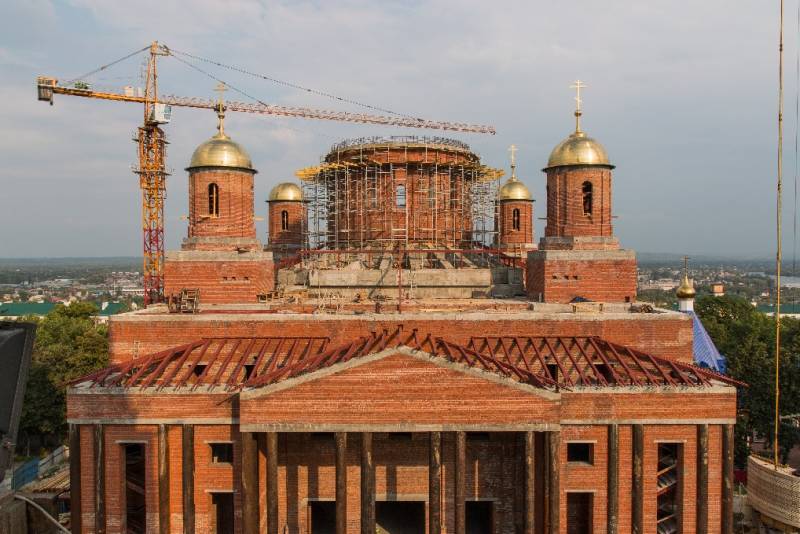 A new cathedral is being built ...
It was said that after the explosion of the cathedral, a ghost in a white shroud began to walk across the square. Three security officers were sent to catch a ghost. They didn’t catch him, but saw how he suddenly appeared near the wall of the governor’s house and then seemed to fall underground under the site of the former monument to Karl Marx.

In general, things got worse nowhere and only showed the people the weakness of the existing government. Everything had to be done quickly. Break the bell cable with a dynamite saber, do not spare explosives for detonation (pre-train in some church outside the city!) In order to detonate once. And the main thing is to immediately remove all the destruction so that nothing reminds us that the cathedral was there at all. So as in the song: “Here it was, and no!” Because there is nothing stronger than the Bolshevik party and their iron Bolshevik will!

But the most important thing is, of course, the cowardly silence of the fact of the explosion of the cathedral in the regional newspaper. An article about celebrating Easter is bad - here it is, but a joyful article that another dope nest in the country ceased to exist did not appear! What, the journalists were afraid that their hands would dry out? Or that believers in a dark alley will fill their faces? 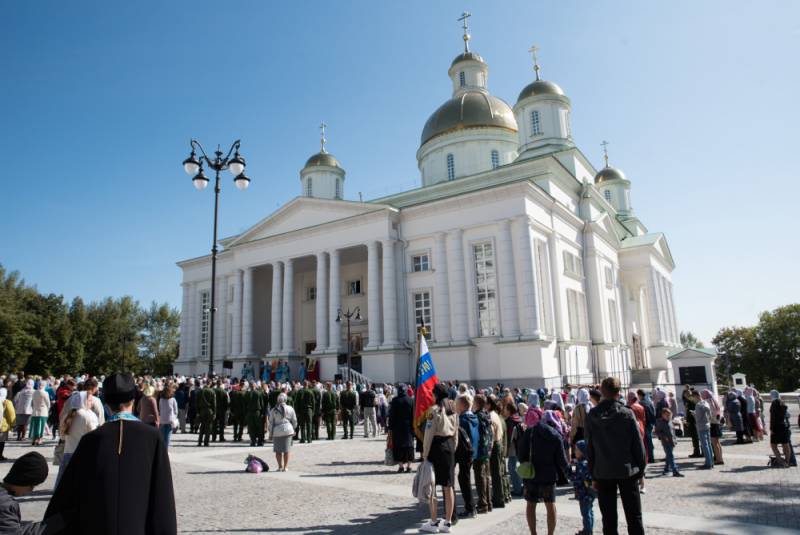 And here he is now!
Well, the modern history of the cathedral began in 2010. On April 7, the foundation stone was laid, and on February 28, 2011, the foundation was poured with concrete under the bell tower. In December 2014, the main dome of the cathedral was installed. To date, the construction of the cathedral, together with a bell tower 82,5 meters high (with a 27-storey building) has already been completed. Even the basement here is seven meters high! It remains to lay the walls with granite panels, lay a stone floor, as well as finish the basement and first floors. 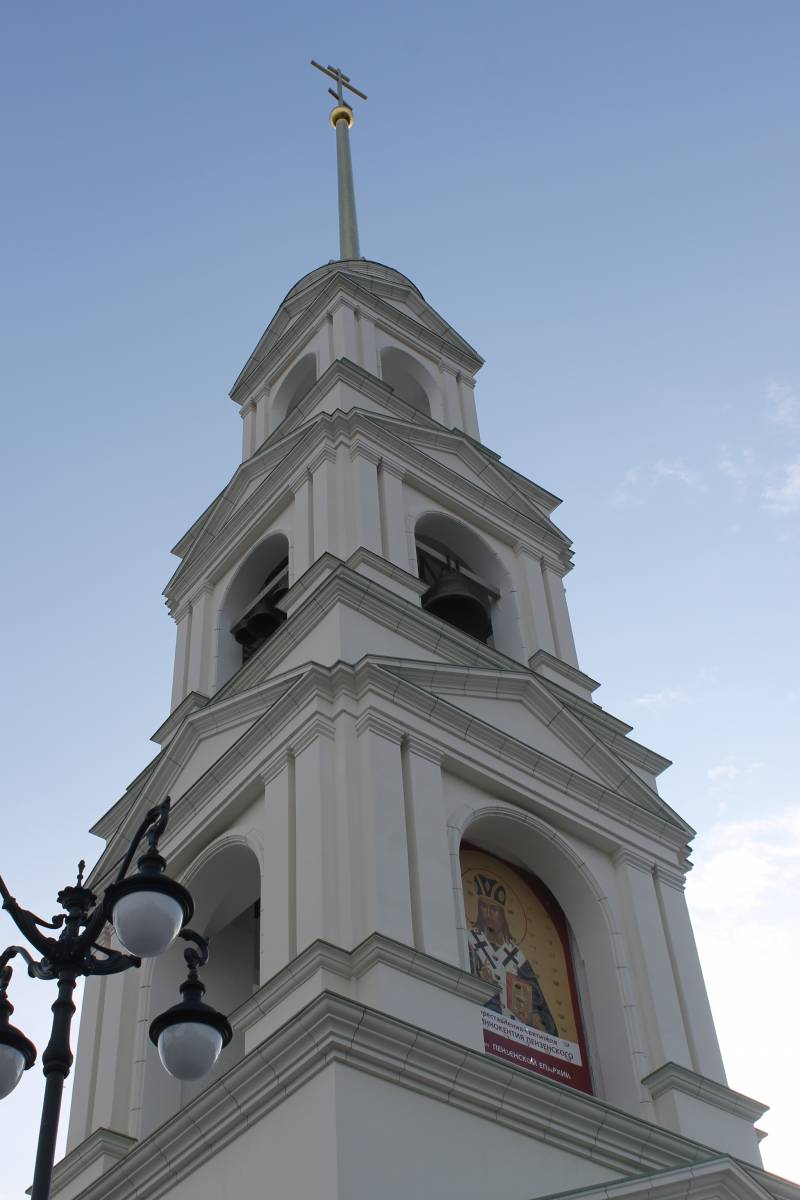 The modern bell tower is taller and slimmer than the old one!
“The Spassky Cathedral is composed of 2 million 200 thousand bricks. It can accommodate almost three thousand parishioners, ”they told me in the information department of the Penza diocese.

Interior finishing work is the most painstaking, time-consuming and costly. According to experts, in terms of investment, the finish will exceed the construction itself! 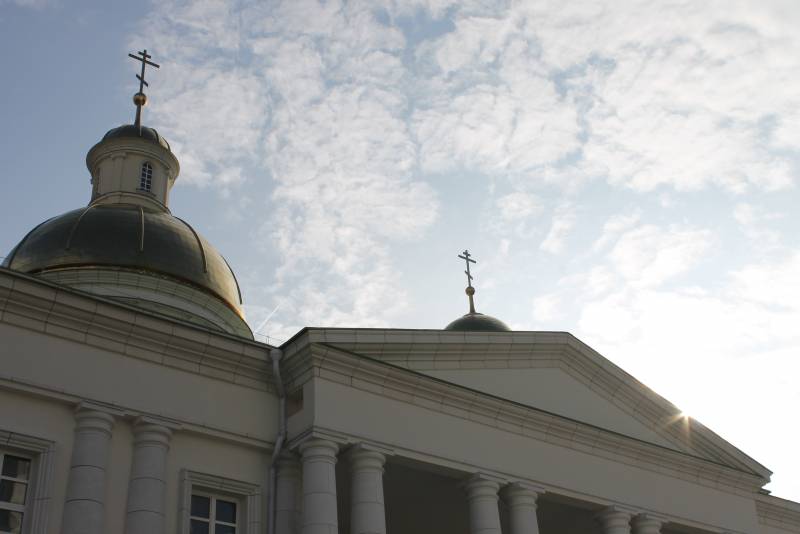 "The sun over the cathedral"
“Now you will not see anything interesting, inside the church everything is in the woods, plastering is in progress. We plan to complete this work this summer. Only after plastering can artists start painting the temple, ”said Andrei Timofeev, an artist-designer and icon painter who is involved in the interior of the cathedral. - Of course, the design will be conducted according to all the canons. Unfortunately, no sketches of the decoration of the old temple, which stood on this site until 1934, have been preserved. There are fragmentary 4-5 watercolors of Makarov, and that’s all. Unfortunately, they cannot be restored to their old paintings. ”

According to him, Moscow icon painters are ready to get down to business and are now developing design sketches. The cathedral will have a unique marble floor: made of natural stone, the shades of which will be selected among marbles in various parts of the world. 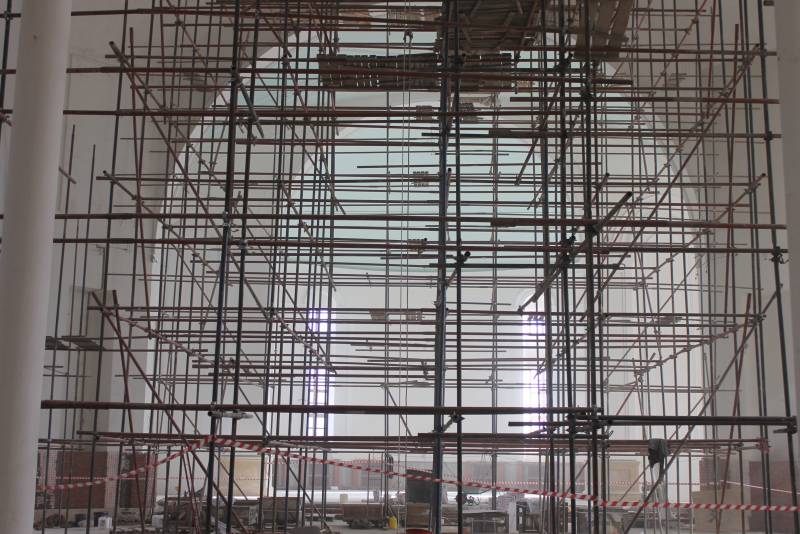 Scaffolding inside
“It will be a built-in floor with a pattern, perhaps it will be ordered in China or Italy,” continues Andrei Timofeev. - On the walls, we decided to make panels 1,5-2 meters high, made of natural or artificial stone. It all depends on funding. ” 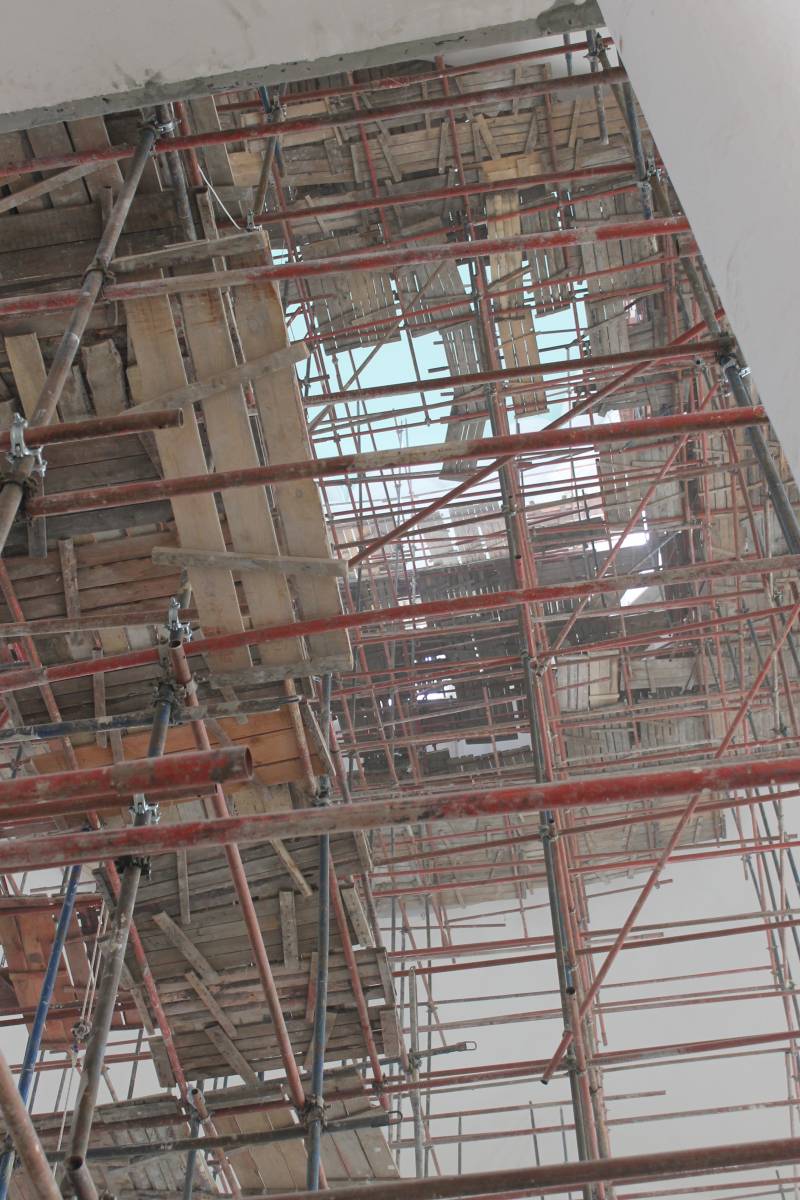 Look up - the hat is falling off your head
Gold details will be truly gold. But the domes, although they look golden, are actually trimmed with golden sheets of a very strong and durable material - nitrotitanium. And the cathedral itself will be filled with light and air. And this is indeed so, and now let it be filled to the top with scaffolding. 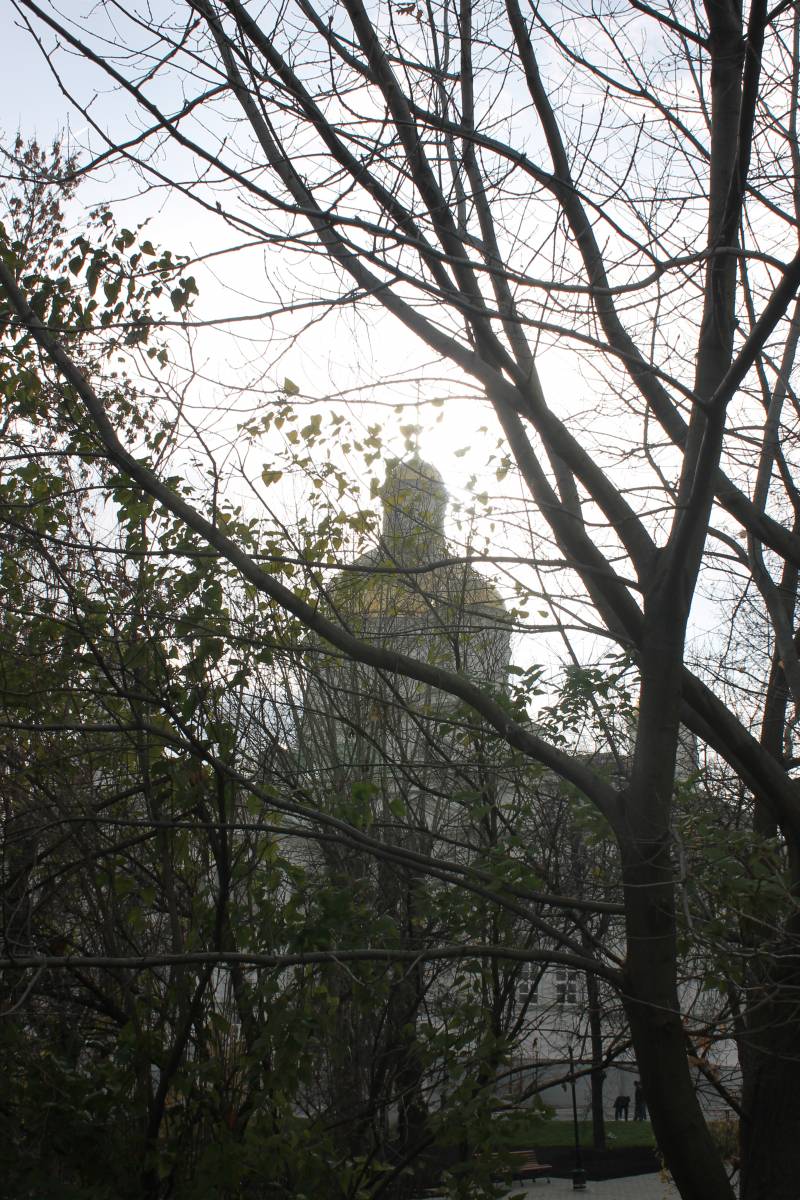 Behind the trees of the park ...

Author:
Vyacheslav Shpakovsky
Articles from this series:
Country of the Soviets. My career as a political informant
Back to USSR. Information for Soviet children
Archival affairs: NKVD on peasants and Stakhanovites
Archival affairs. From “class alien” to “loss of party intuition”
Back to USSR. Mosaic of memory
By the wave of our memory

We are in Yandex Zen
The great proletarian writer Maxim Gorky
Thunderbird revolution. Maksim Gorky
678 comments
Information
Dear reader, to leave comments on the publication, you must to register.