Archival affairs. From “class alien” to “loss of party intuition” 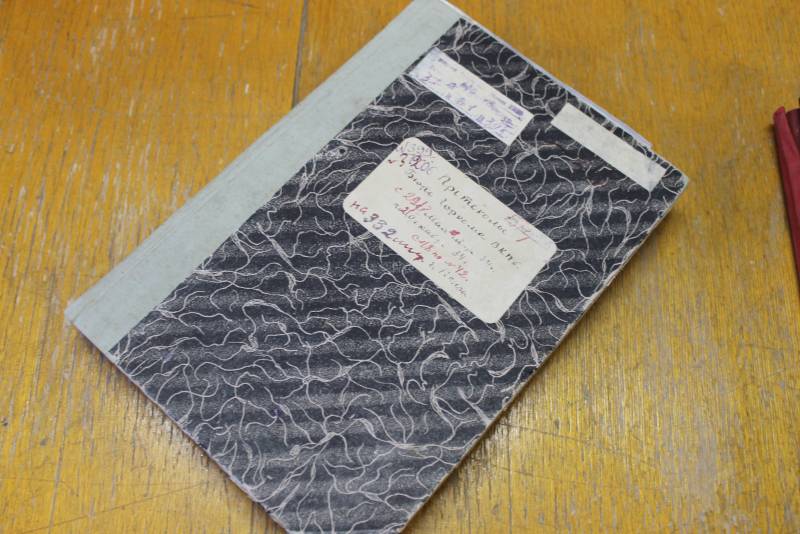 This is what the files of the city committee of the CPSU (b) of the city of Penza look like. The region did not exist then, it did not exist: the Penza region was merged with the Tambov region shortly before
Only vilification, pride, discovery of secrets and insidious ...

History and documents. So, continue acquaintance with documents from the party archive of the Penza region. And today in front of us will be photocopies of documents for 1934. "Year of the congress of winners." Since we don’t have one particular topic, we will read everything in order to make an impression about that time. 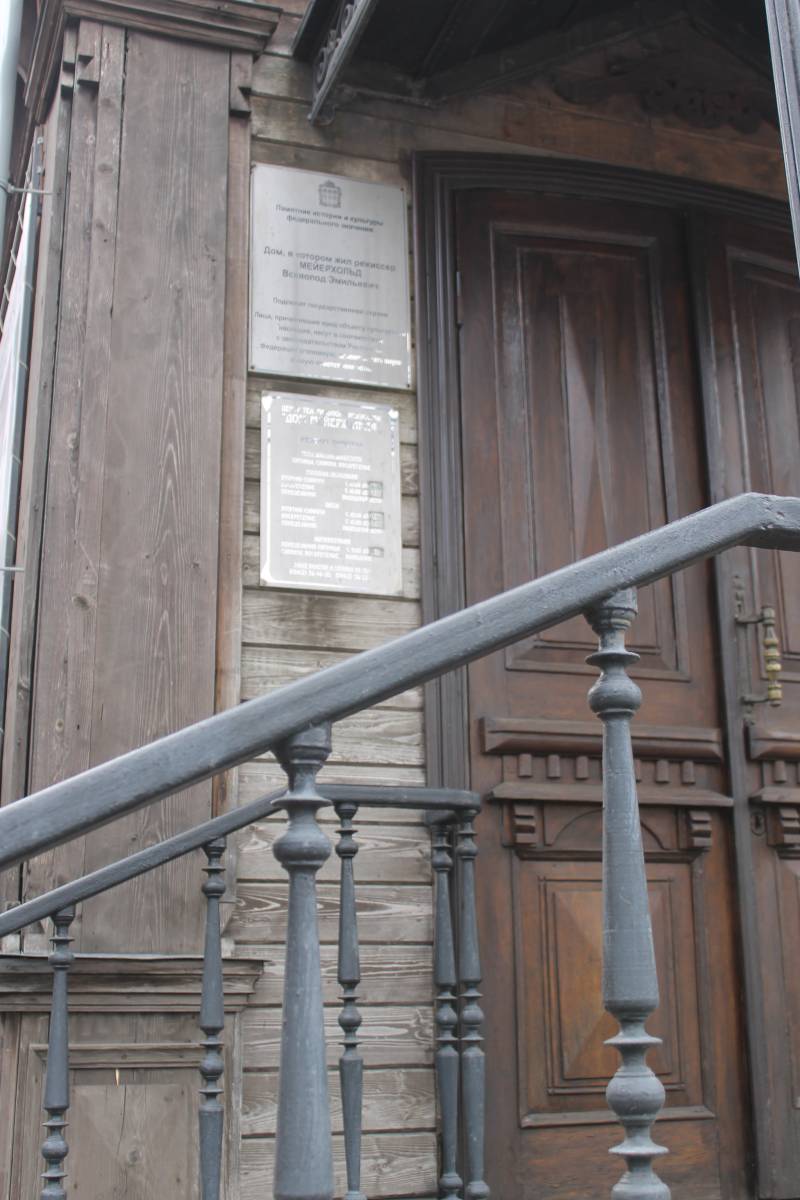 We go inside ...
In principle, anyone can work here today, but you need to get permission from the state archive, because OFOPO GAPO is its branch. Many are looking for their relatives. Indeed, all communists had registration cards and personal files, and you can learn a lot from them. For example, that your ancestor, a veteran of the Great Patriotic War, who was awarded orders and medals, was expelled from the party for ... sodomy, and at the same time put on trial for this. 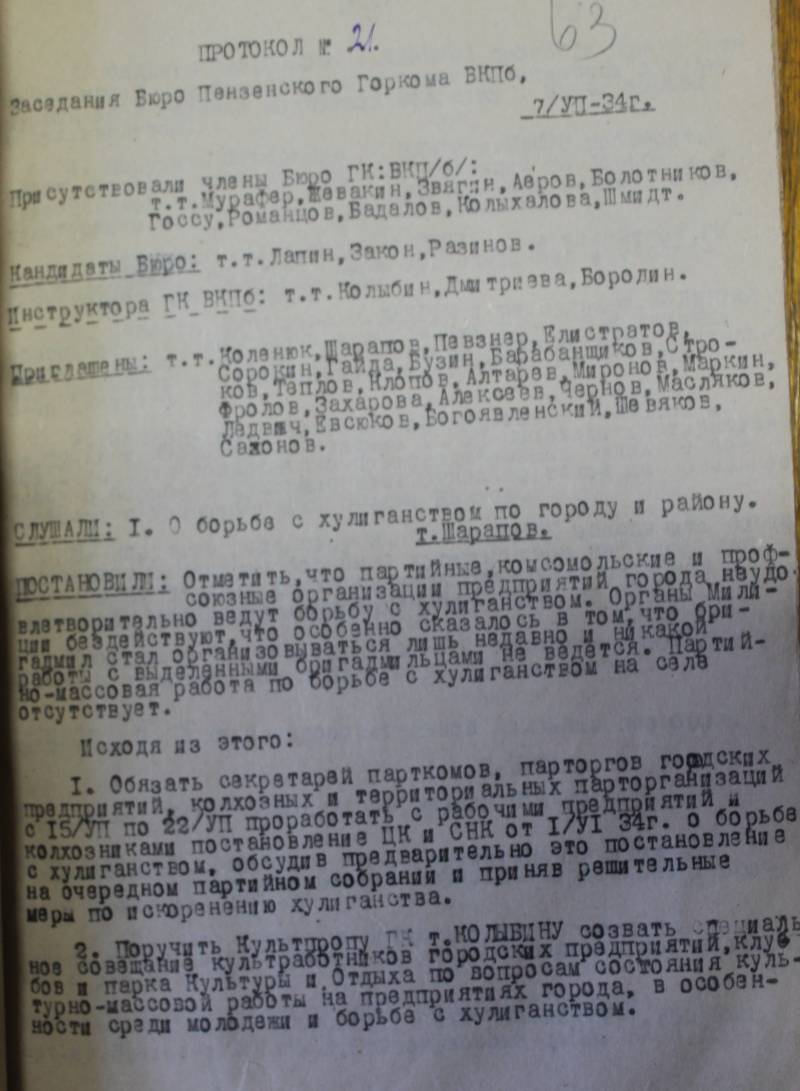 "Police inactive"
Let's start with this document. At one time, VO was my article on hooliganism in Penza and the region, written on the basis of one dissertation on deviant behavior of Soviet citizens of the 20s. But there, the business ended with the 29th year. And now five years have passed, and the problem of hooliganism, as it turned out, as it stood, still stands, especially in the countryside. 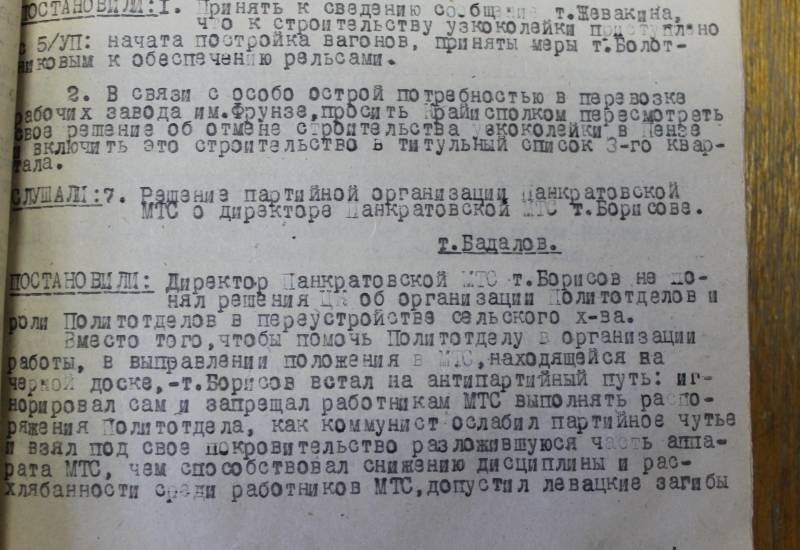 "Left bends"
Interestingly, in the 1934 documents (in the newspapers Pravda and Rabochaya Penza), the terms “pest” and “wrecking” have not yet been used. But the talk was about “class alien”, “loss of party flair”, “decomposers” and “leftist bends”. It’s interesting what exactly such “leftist bends” could have been committed by the head of the MTS, but they could not find out from the documents. 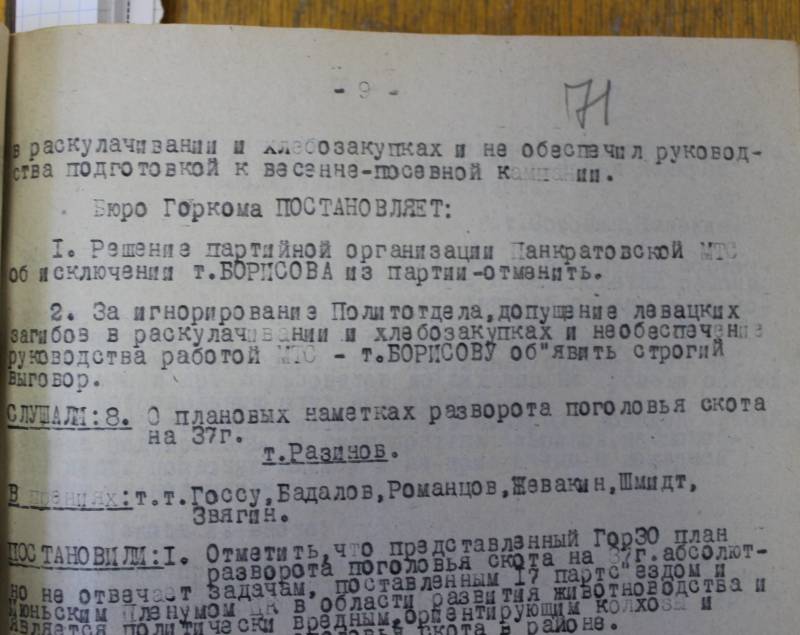 "Leftist bends" in dispossession. Recall, the case takes place in 1934! 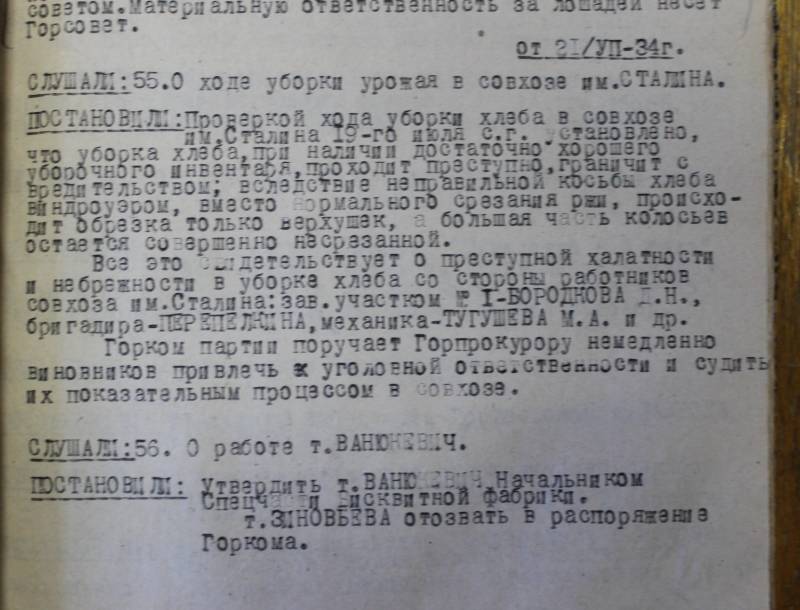 "Borders on sabotage." But there are no direct accusations of wrecking 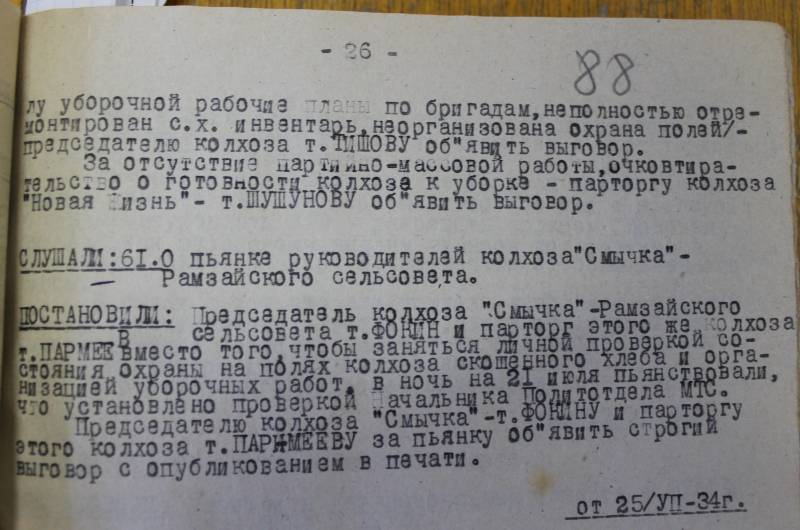 "Strict reprimand for the chairman for drinking" 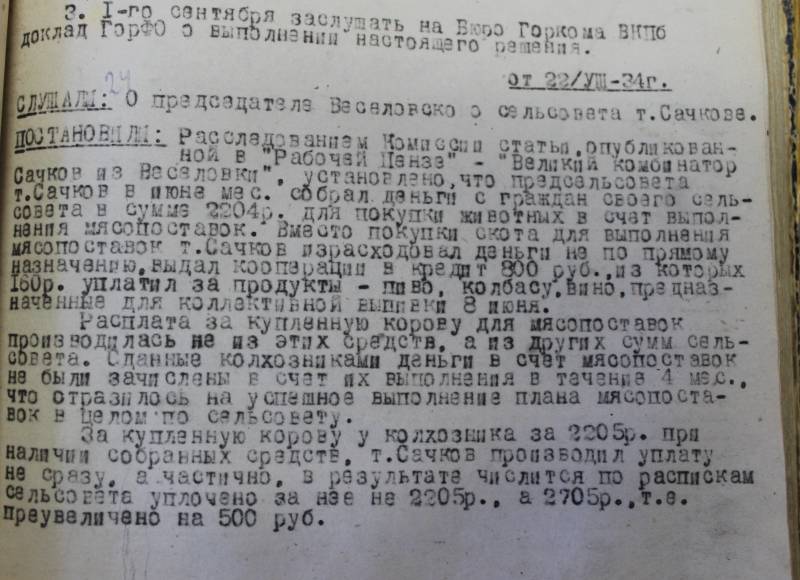 "The Great Combinator Sachkov from Veselovka." The book of Ilf and Petrov made a strong impression, to be sure. And the journalists of the newspaper “Working Penza” used the name of its main character and wrote about the revealed shortcomings. And the city party committee checked the facts and took measures ... 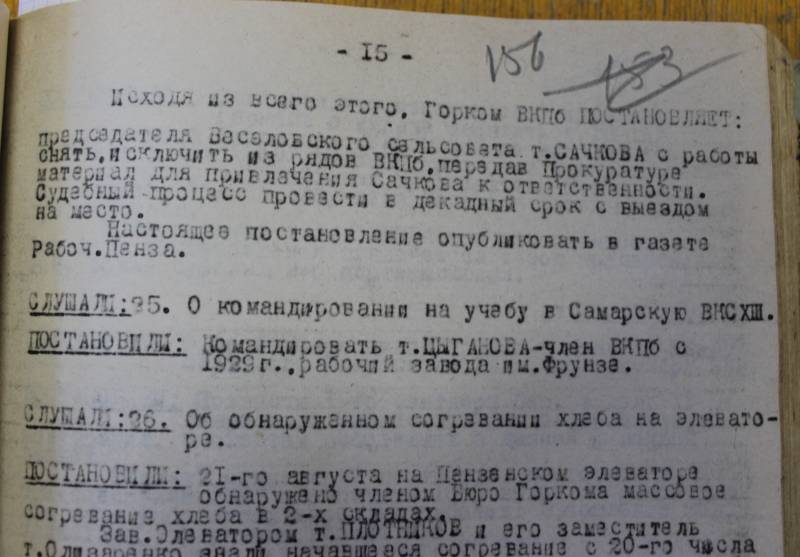 And so this Sachkov was punished ... 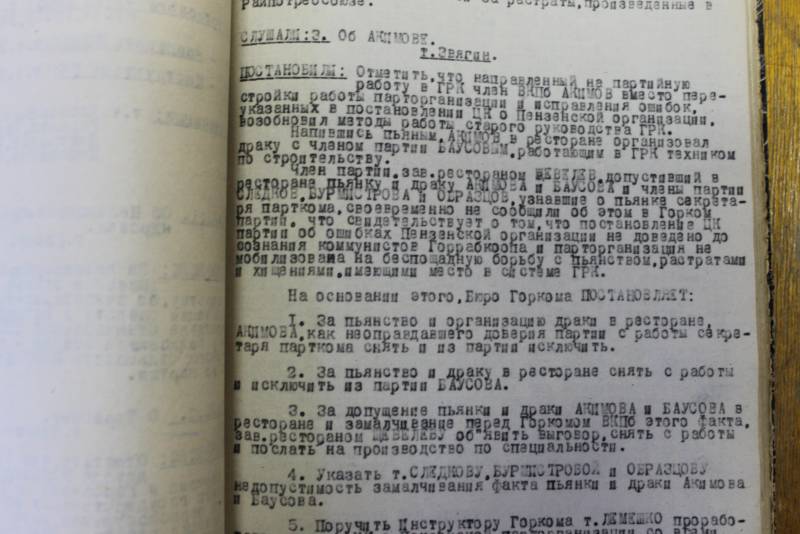 Not justified the high confidence ... 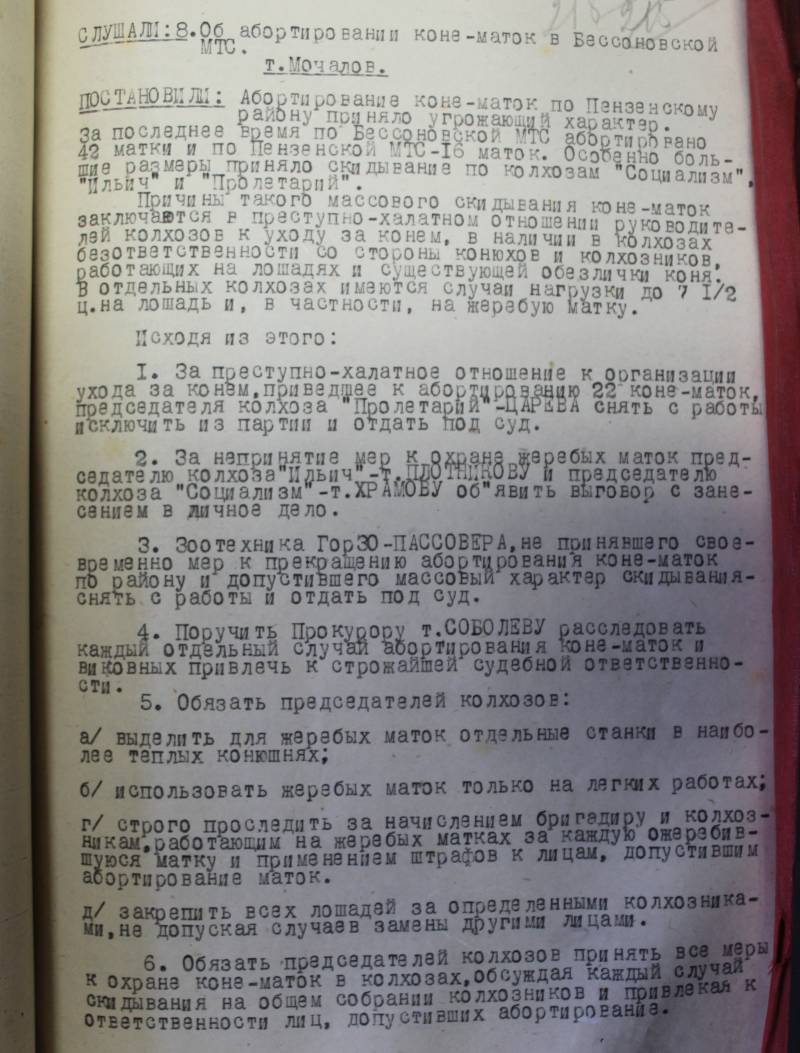 "About the abortion of mares"
What kind of affairs did not have to deal with the city committee of the CPSU (b). After all, there were Soviets of working people's deputies, both urban and rural; why then were they? However, the party was even concerned about the mares and the frequent increase in the area of ​​their abortion. In general, the picture is strange if you read the party documents: the police were inactive, the grooms did not watch the uterus, the marriage exceeded 60% in the factories. Did anyone at that time even work as expected? 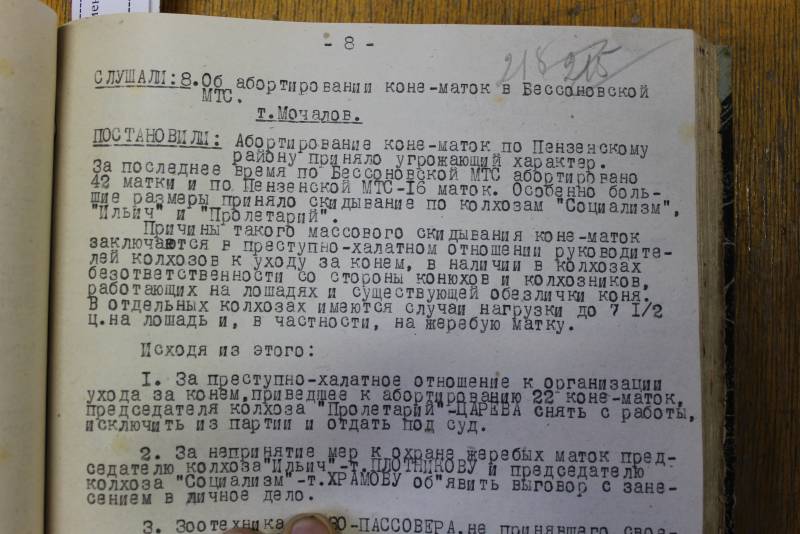 Bad work was punished severely! But nothing has changed ... In the place of some scammers, others came 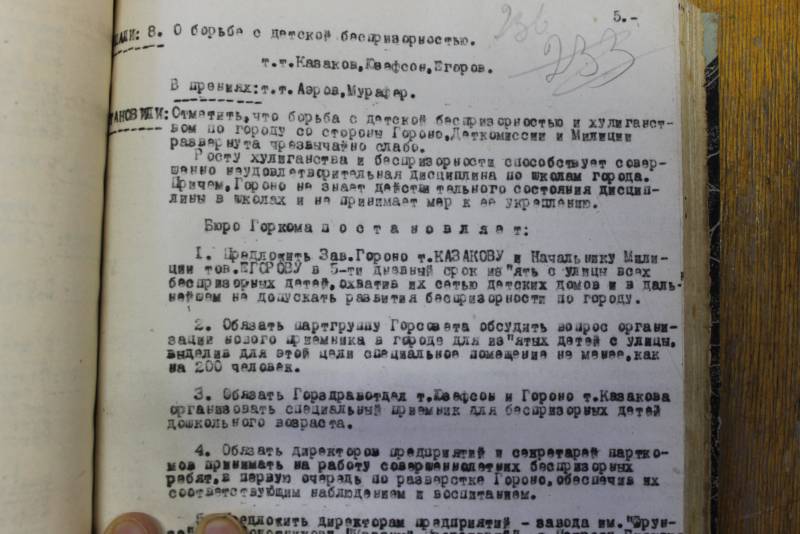 "On the homeless"
But this is a very interesting document. On the fight against street children. But where did they come from? The civil war ended in 1922. In the 20s, the struggle against homelessness was very active. And here again, homeless children, and even on the scale that caused the discussion at the city committee level ... 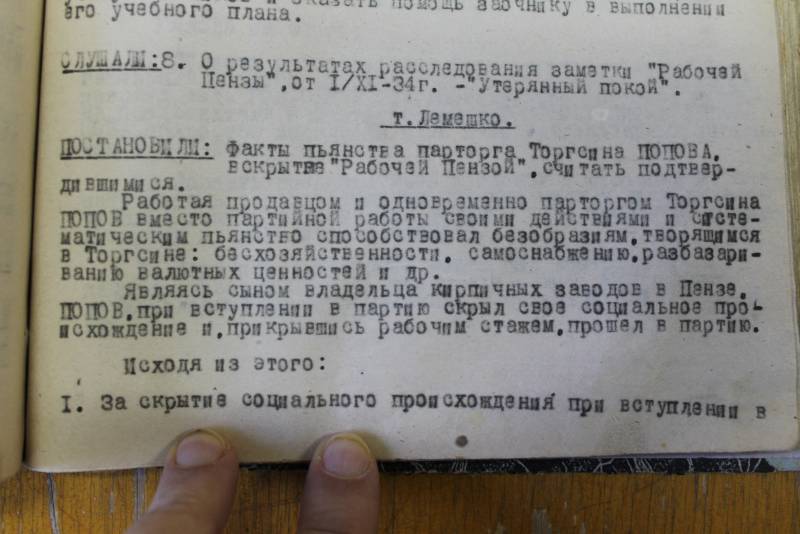 Party organizers also drank ... Yes, and hid their social origin, crawling into the "warm places". That is, the "top" we have far from the best hit ... always? Is this a tradition like that? This Popov was exposed (or rather, it was he himself exposed) and punished. But how many of these “priests” in the country turned out to be smarter? That is, the system was sharpened so that as soon as you went upstairs, you immediately “get there”, betray the working masses, become bourgeois and begin to “work for the West”. A strange system ... 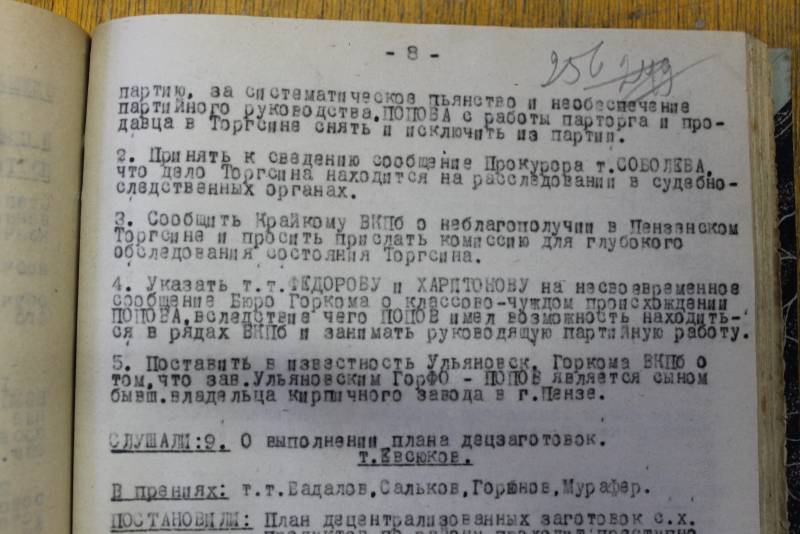 So them, worthless, so! 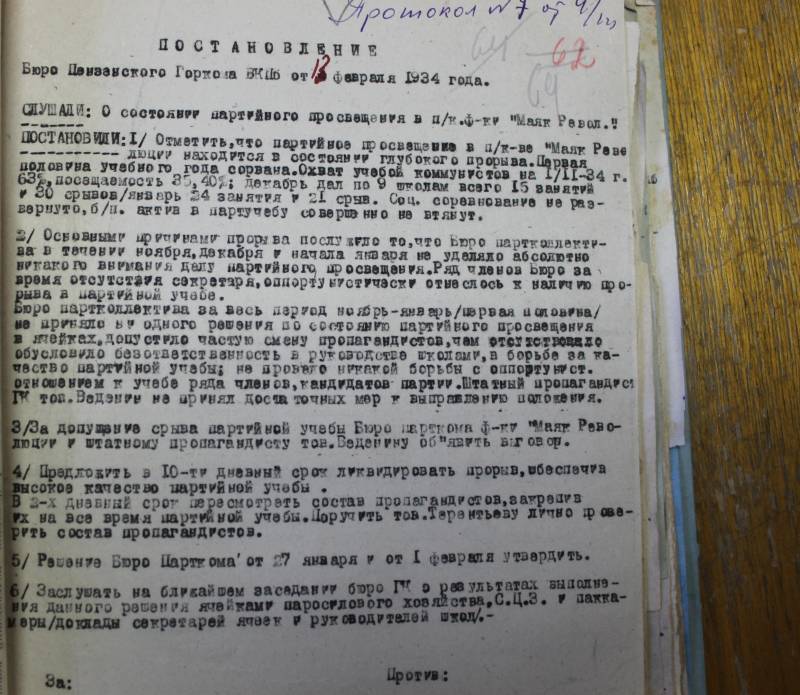 “Eliminate the breakthrough in 10 days!”
Another indicative document. There is no party propaganda work. Gorkom notes this. Opened the "breakthrough." And then there was an instruction to liquidate it within 10 days. But can such a serious flaw be corrected in such a time? Moreover, to ensure the "high quality of party education" where it was not at all. That's how the party organs themselves pushed people to show off. They set obviously impossible tasks, and then demanded their implementation. And people, so that they would not be punished, all ... "performed." The question is “how?” 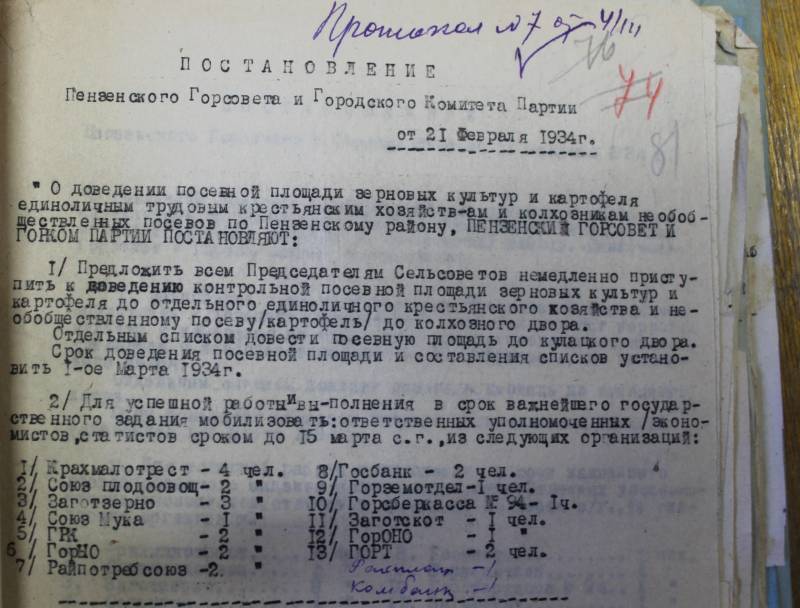 “A separate list to the kulak court”
But this is just a unique document. That is, 4 years after the “liquidation of the kulaks as a class”, fists still legally existed on Penza land and they were given tasks by the City Party Committee to “finish the sowing area”. What kind of fists were they? His board and absolutely loyal to the Soviet regime? But the kulak is the same rural moneylender, "world-eater", "spider" - that's what they were called in the village. And suddenly - here is a separate list of "comrades fists". Very interesting. The theme for a separate study is directly: "Soviet fists after collectivization and dispossession." 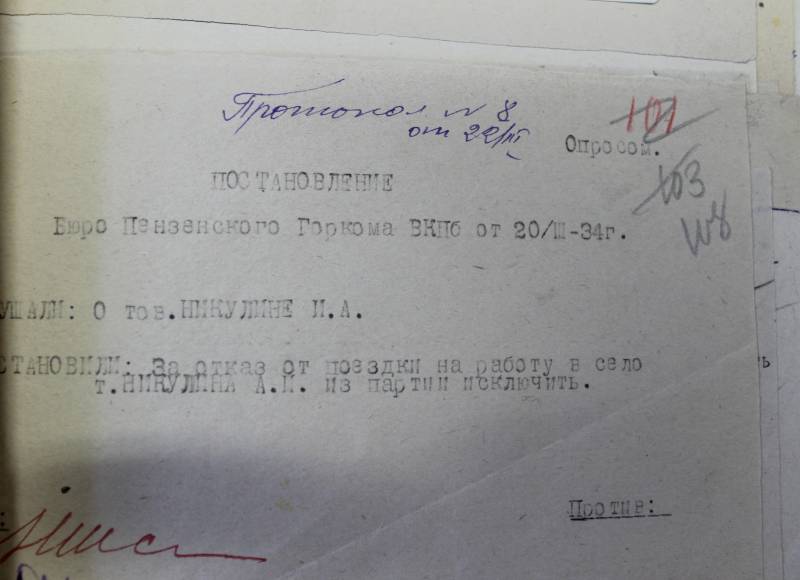 And someone lost his membership card for refusing to go to the village ... 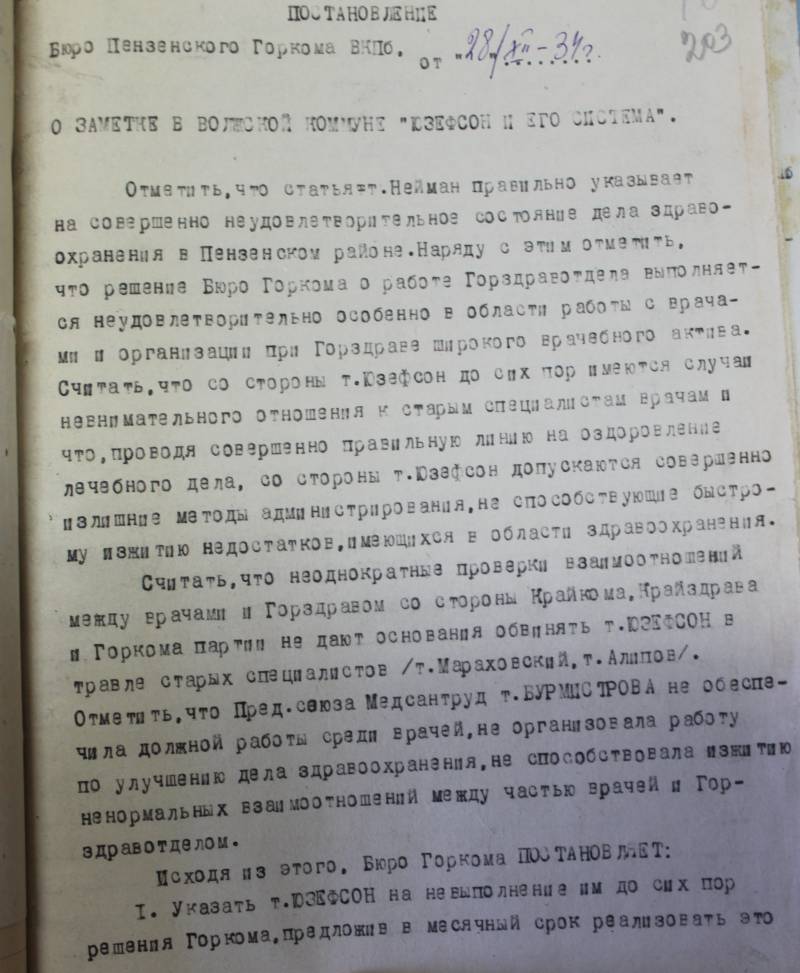 “Jozefson and his system”
Also very interesting material. In defense of old specialists, here's how. Against administration ... Something familiar blows, is not it? It seems that even today we recently had the “case of doctors” in the Moscow Cancer Hospital related to excessive administration by the director. As you can see, little is changing in our country. The same rake, and we are still stepping on them. 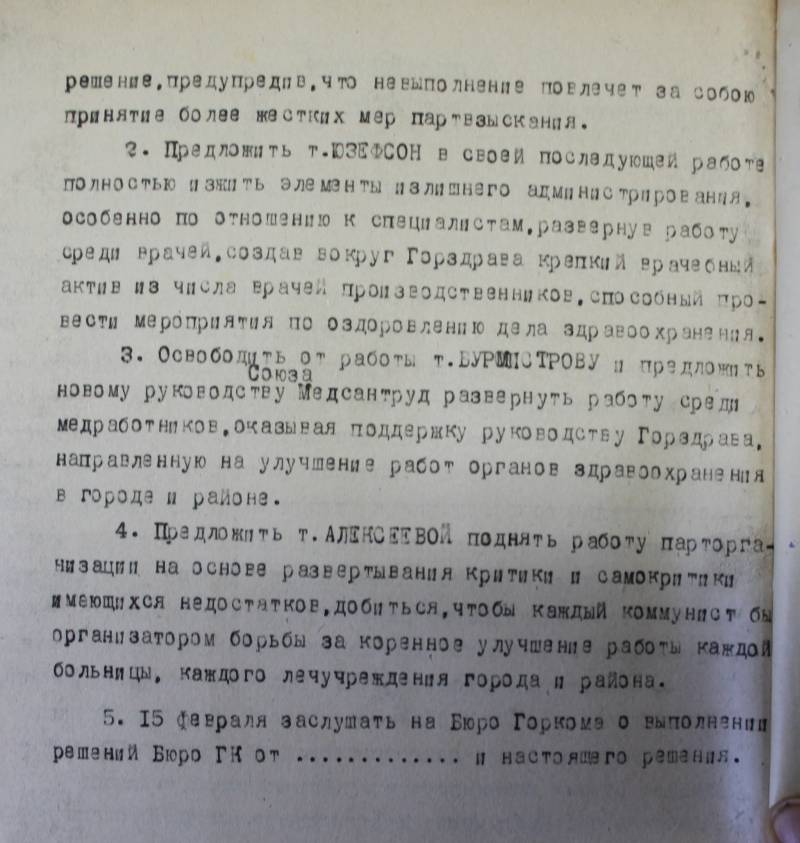 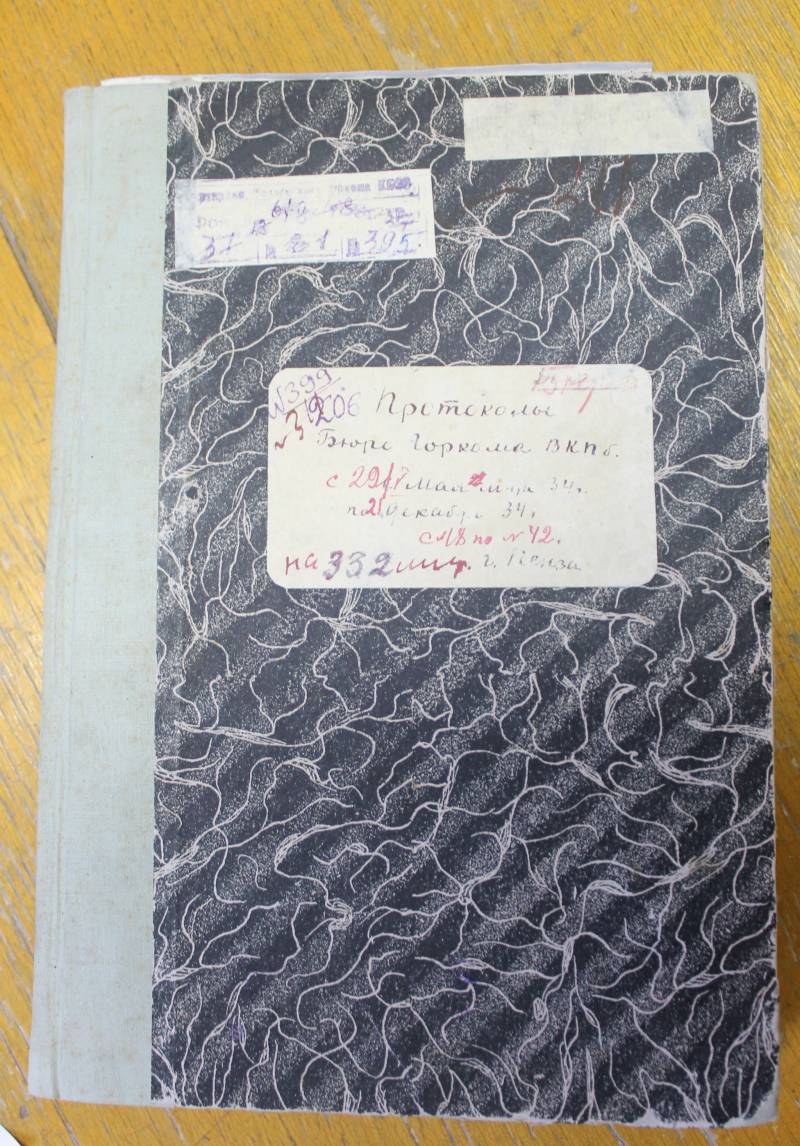 Well, the “book” for 1934 was worked out from cover to cover ... And how many more are there in this archive?

Author:
Vyacheslav Shpakovsky
Articles from this series:
Back to USSR. Mosaic of memory
By the wave of our memory

Ctrl Enter
Noticed oshЫbku Highlight text and press. Ctrl + Enter
We are
Formation of the Soviet propaganda system in 1921-1940The activities of the Penza Regional Committee of the CPSU (b) on the guidance of informing the public about life abroad during the Great Patriotic War (1941 — 1945)
Military Reviewin Yandex News
Military Reviewin Google News
219 comments
Information
Dear reader, to leave comments on the publication, you must sign in.