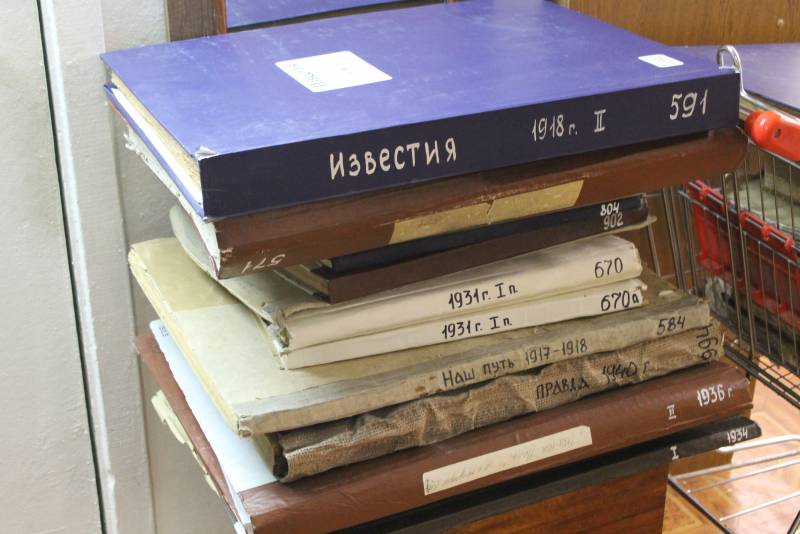 This is how newspaper sets look in the state archive. It is very interesting to read first the newspapers, and then the archival affairs of the OK party. Or vice versa - first things and then newspapers. It opens so yin and yang, black and white, clean and dirty, that only you wonder. One thing in the newspapers, another thing in the “deeds”. No wonder most often under the heading "secret" and "owls. secretly. " Such was life then. “To ordinary people” - hooray, “we are great, we are powerful, higher than the sun, more clouds”, and there ... “top secret”, only for the elite.

History and documents. Let's start with the fact that publication of documents of the Penza OFOPO GAPO, as, however, as expected, caused an ambiguous reaction from the VO readership. Someone familiarity with the documents seemed interesting. Well, someone, looking at the screen, of course, blamed the author for all the shortcomings he saw there. That is, the selection is “not that” (one-sided), and the filing of photographic material is hacky (and professional photography costs money, unless someone wants to sponsor it for me?), In a word, “it's not that.”

But here, by the way, the saying will have to be made: there is nothing to blame for the mirror if the face is crooked. Already what documents are, we publish such. Hidden to this point from the public. The materials of the newspapers Pravda, Stalin's Banner and others were not hidden ... And this is like two faces of the two-faced god Janus: one for all, the other for the elect. And isn’t it interesting to know, and with what, in fact, did these chosen ones have to deal with for the benefit of the others who were estranged from this unpleasant information? In any case, other VO visitors are not eager to go to their local archives and to show by concrete examples from documents that everything was fine in their cities, that this negative has been a purely local phenomenon since the era the city of Glupov Saltykov-Shchedrin.

True, some still admit that "no one argues, there were flaws, but ..." Well, look with your own eyes what the flaws were, how they accumulated over the years, accumulated, and then the quantity turned into quality, and it came 1991 year. So, for example, I would only be glad that without any work whatsoever, and just by opening the VO page on the Internet, it became possible to look into the holy of holies of one of the party archives. Well, just like a drop of water you can think of the presence of seas and oceans, and with these little bits of information you can fully imagine the state of affairs throughout the country. Somewhere more, somewhere less ... So, we continue our acquaintance with our history. 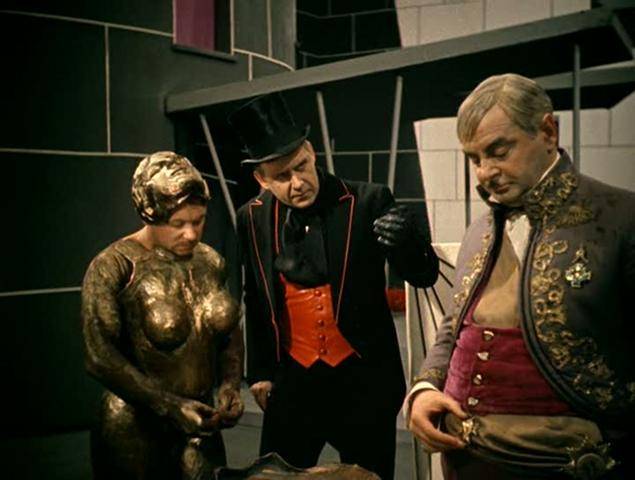 Shot from the movie “Cain 18” The head of the secret police and the prime minister fined, and on the left is his “bronze informant”. Probably, something similar was with us, although, most likely, not so sophisticated ...
Among the documents of the party archive of the Penza region, a special place is occupied by memoranda from the head of the city department of the NKVD, who informed the secretary of the city committee about all manifestations of anti-Soviet behavior of citizens. Who, what, about whether, about this, when, and in the presence of whom, he spoke, what did anyone complain about and why. It was reported on the facts of unacceptable behavior and on cases of industrial marriage detected at the military enterprises of the city. That is, the party knew everything as well as the NKVD bodies. Let's look at some of these notes of one of the most interesting periods in the history of our country - documents for 1937. 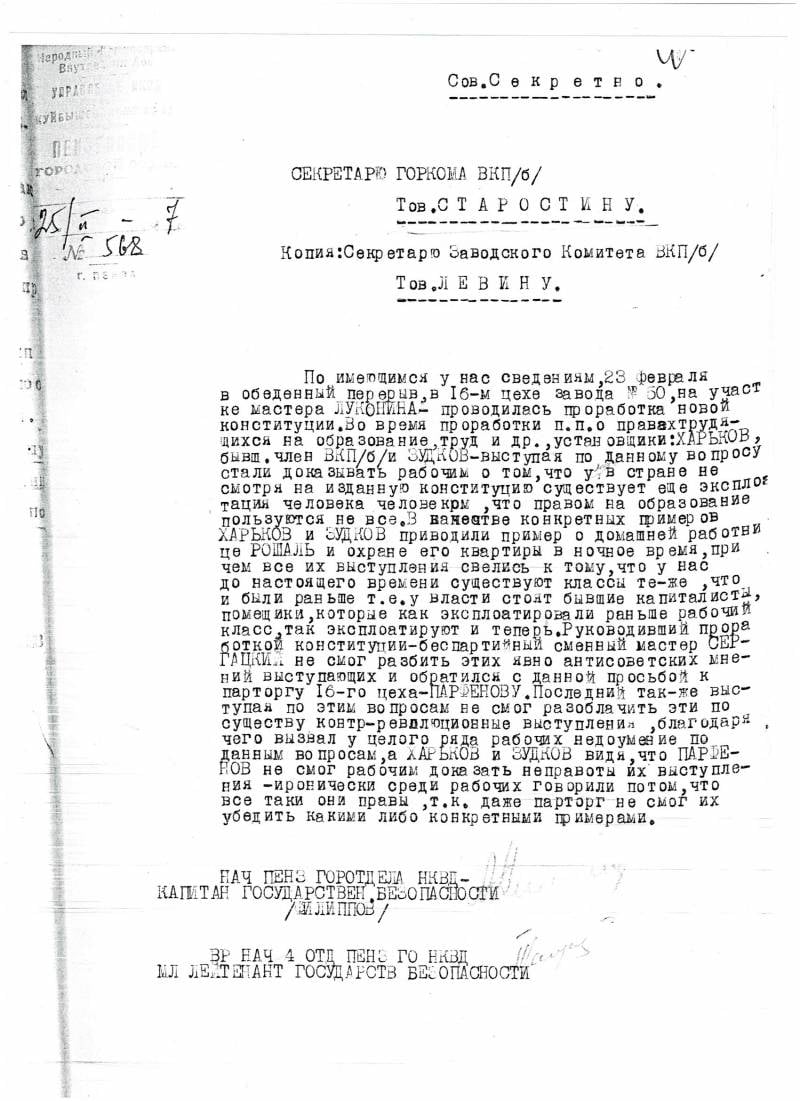 “Didn’t cope on the field of counter-propaganda”
Reading these documents, you inevitably come to the conclusion that there were a lot of people in our country (and even now they haven’t translated!) In their own way smart, honest, but ... that’s purely stupidly everyday. So these two ... Well, what did they achieve with their statements? They put the party organizer in a puddle and fell into the field of vision of the corresponding "organs". That is, even in the 37th there were enough of those who “spoke not for, but against,” but there were even more, of course, those who thought the same, but were silent. And there were absolutely “smart people” who also thought that way, but who lacked the mind and insight to say something completely different, including from high stands! And there were those who saw in them sincere, so to speak, and devotees ... and cast their votes for them. And then, being at the very top, these people quickly "morally decomposed." That is, as one of the visitors to our site said in a commentary on past material, “there were a lot of bastards.” So I want to add - "And that!"

And now let us get acquainted with this document, which was preserved very poorly, but it is still possible to parse the contents. This is a memo on food difficulties on collective farms in 1937. 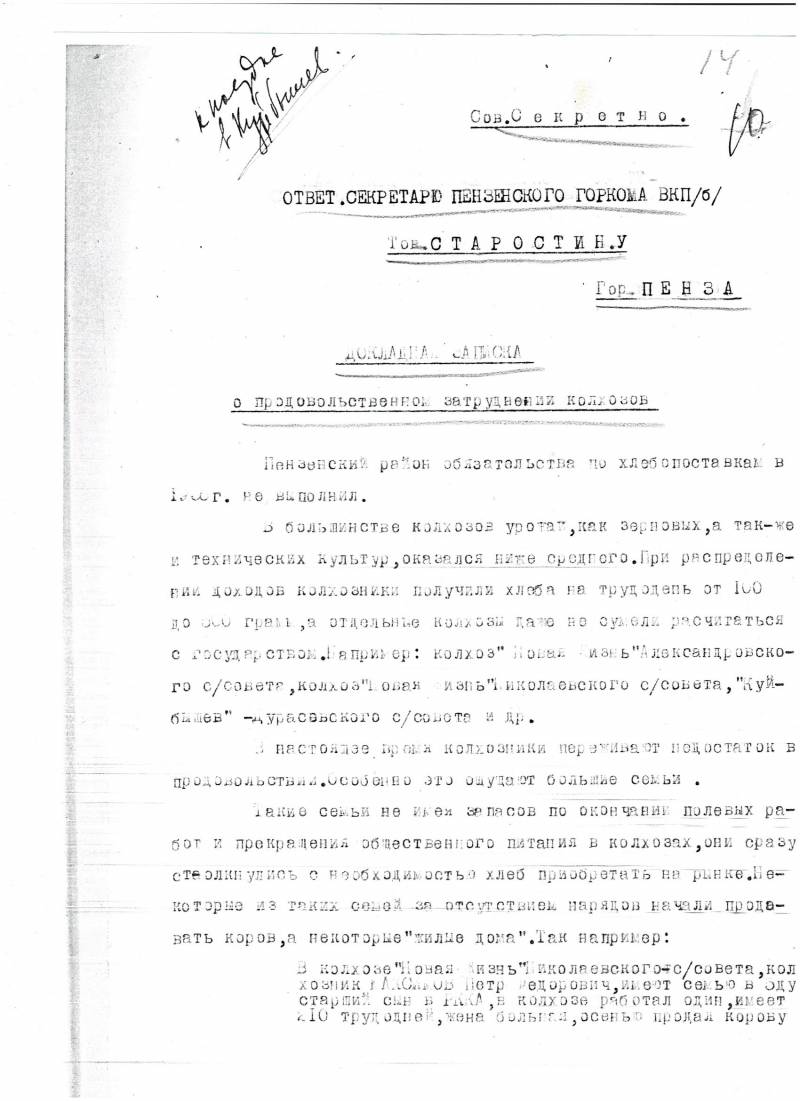 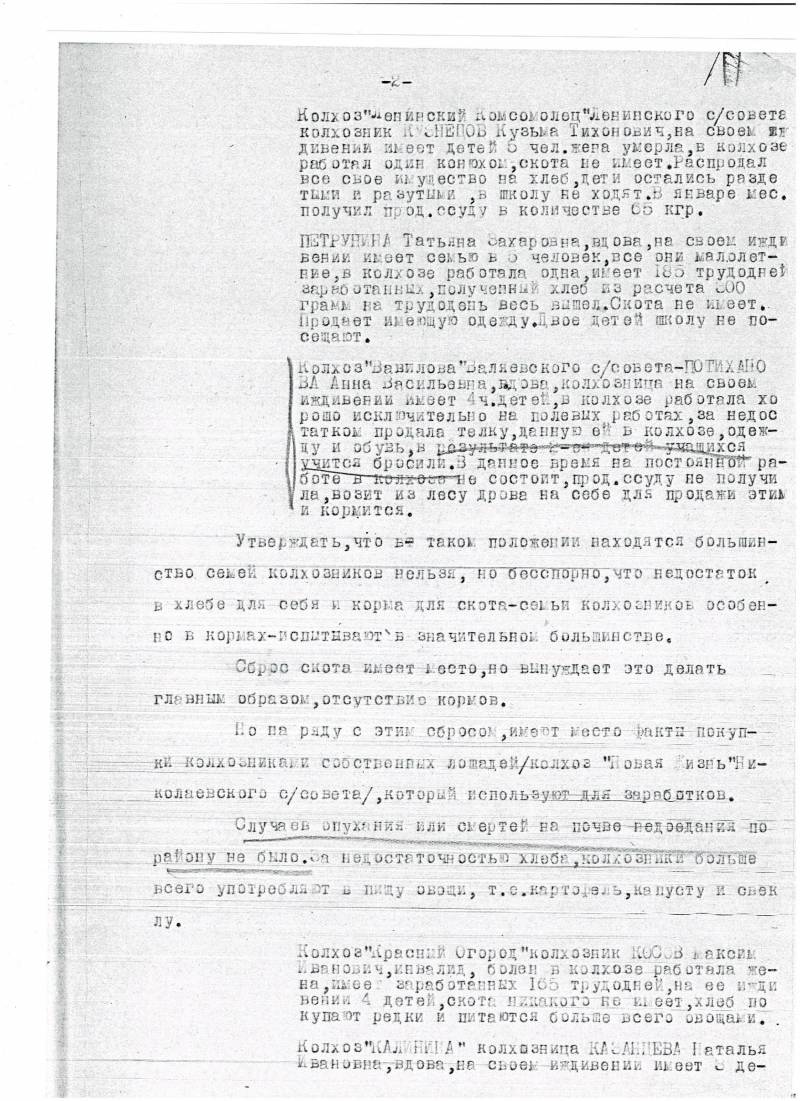 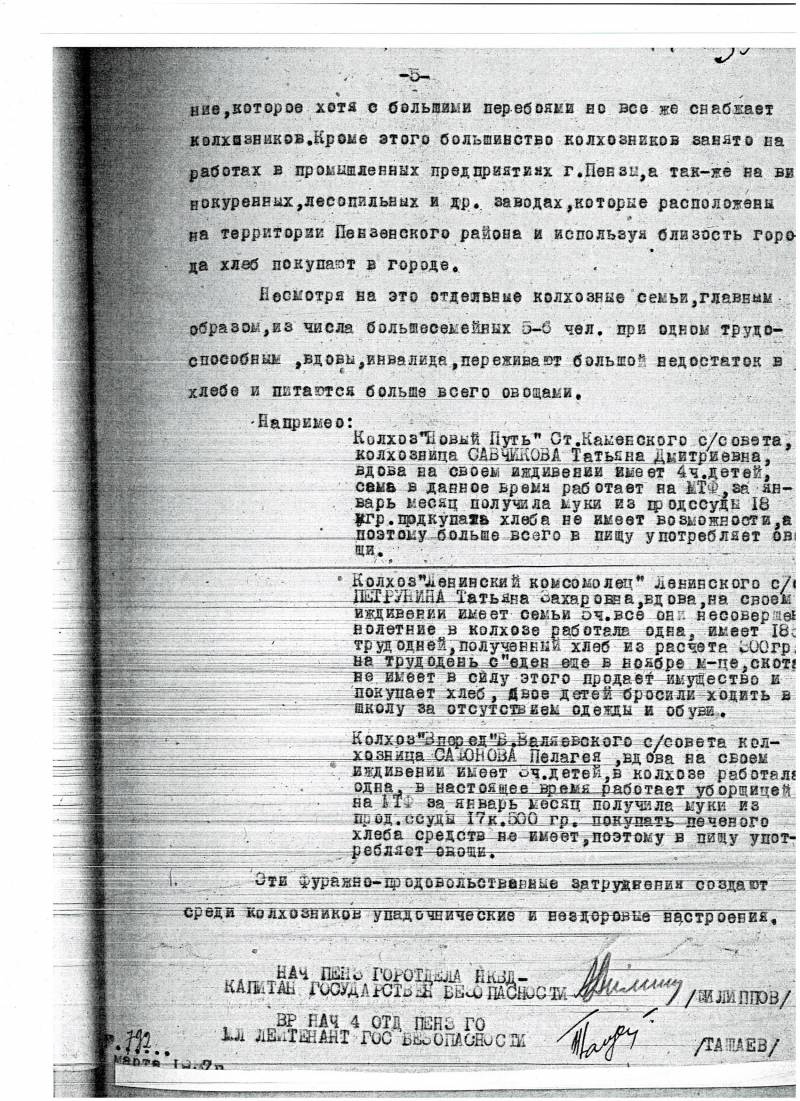 And then we immediately proceed to the fifth, final one, since on all previous ones everything is absolutely the same
And we see on it that as the head of the Penza NKVD on the basis of his "intelligence" assesses the situation: "... there is no doubt that a significant majority of them lack grain for themselves and livestock feed - the collective farmers' families especially in feeds." And as a result: "These fodder-food difficulties create among the collective farmers decadent and unhealthy moods." But what about "life has become better and more fun." And among other things, in the newspaper "Stalin's banner" about these difficulties with food in the village ... they wrote. They wrote that bread was stolen, that grain was strewed to the ground from holey bags, that mares were thrown off from poor care. That's about the fact that the collective farmer Petrunina, having a family of 5 people, can’t feed her and her two children left school in the 10th year of the Soviet regime due to lack of clothes and shoes ... there was nothing about this in the newspaper. 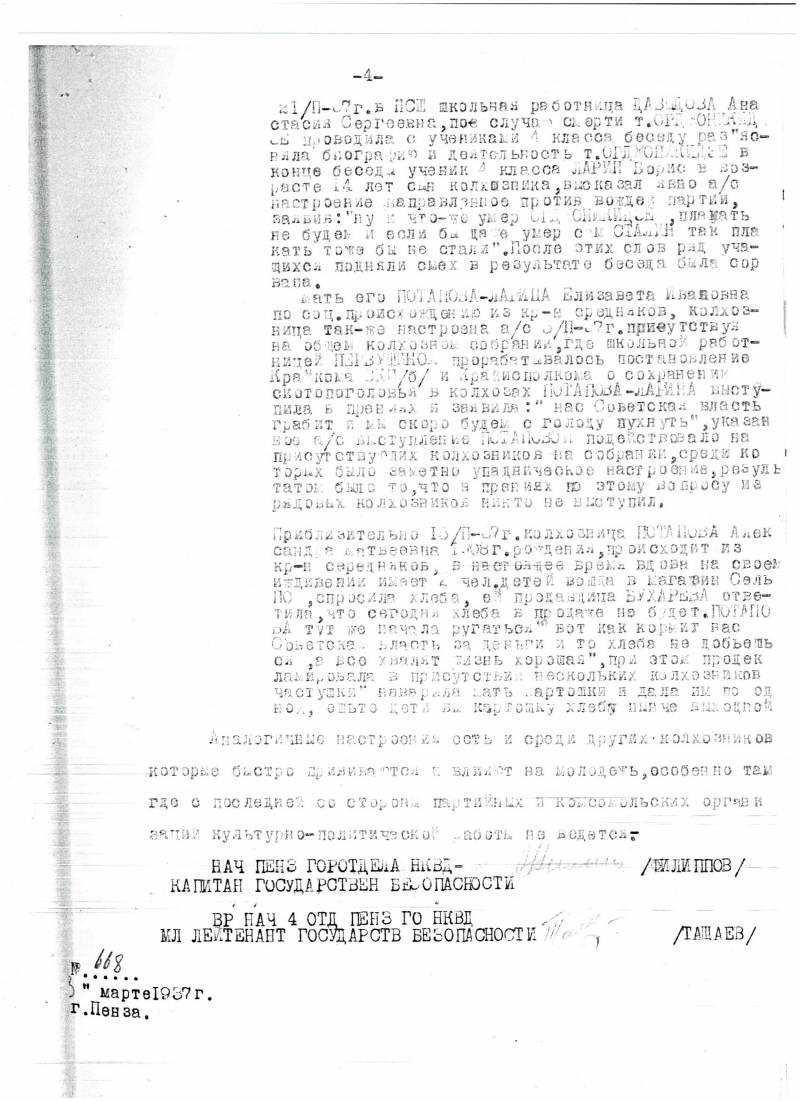 A number of very interesting statements, including those from young people ... 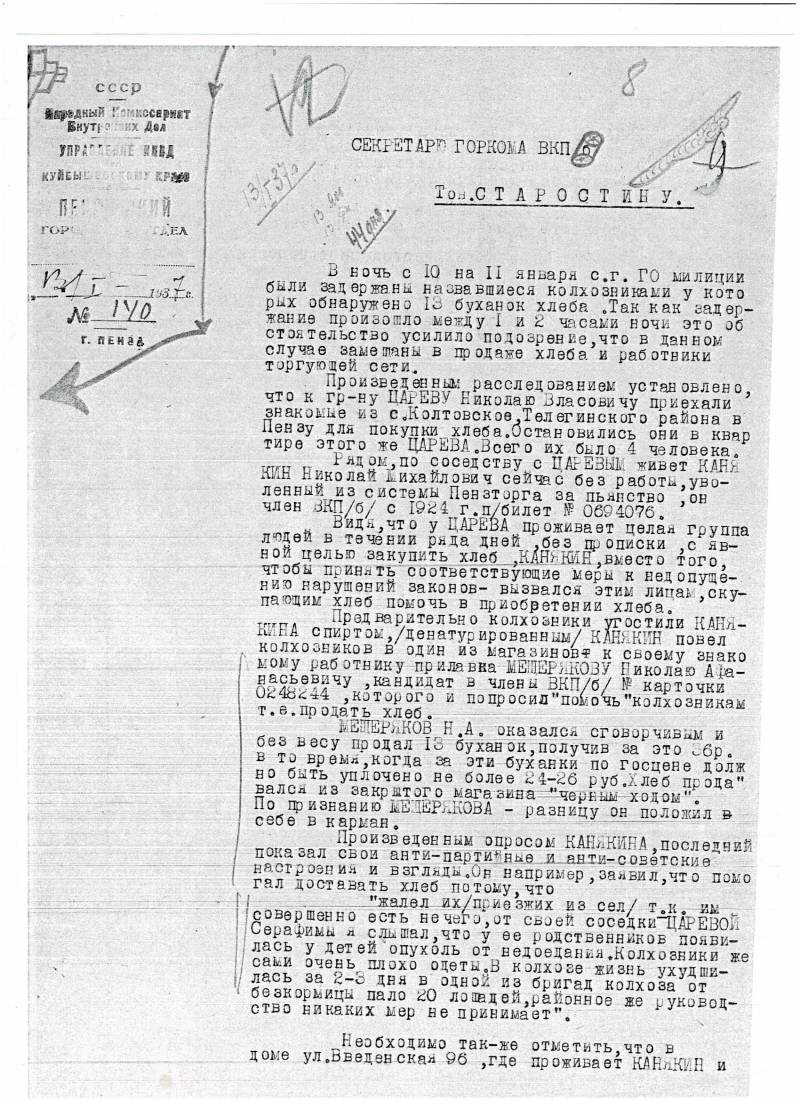 Well, it’s clear that bread began to be stolen by loaves of bread. Rather, as they stole, steal and continue ...
And here is a very interesting document on the deployment of the Stakhanov movement. My article on the Stakhanov movement has already been published on VO: “The trend is the highest labor productivity ...” (March 16, 2017), so there is no point in repeating it. But what’s interesting, this certificate clearly shows that very many workers were not at all happy with the successes of the Stakhanovites and opposed this "movement" in every way. And not only workers, by the way. And again, marriage - 50%, however, now it is already the fault of the specific named pests. 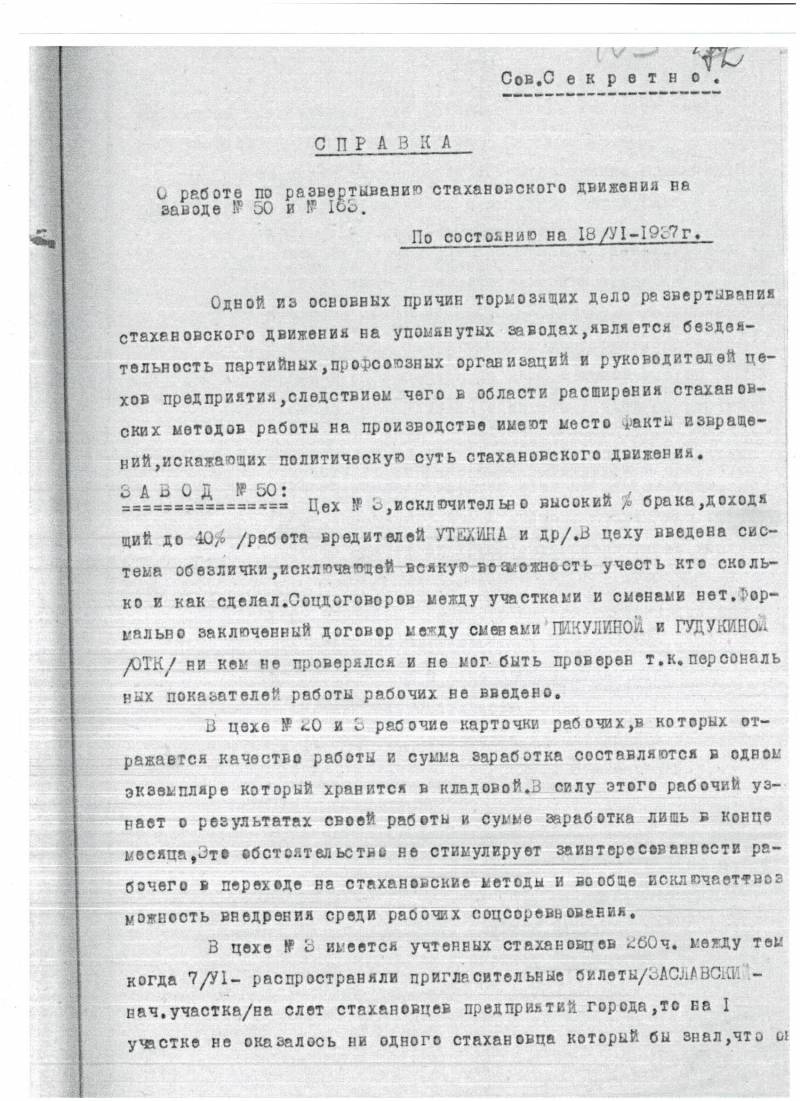 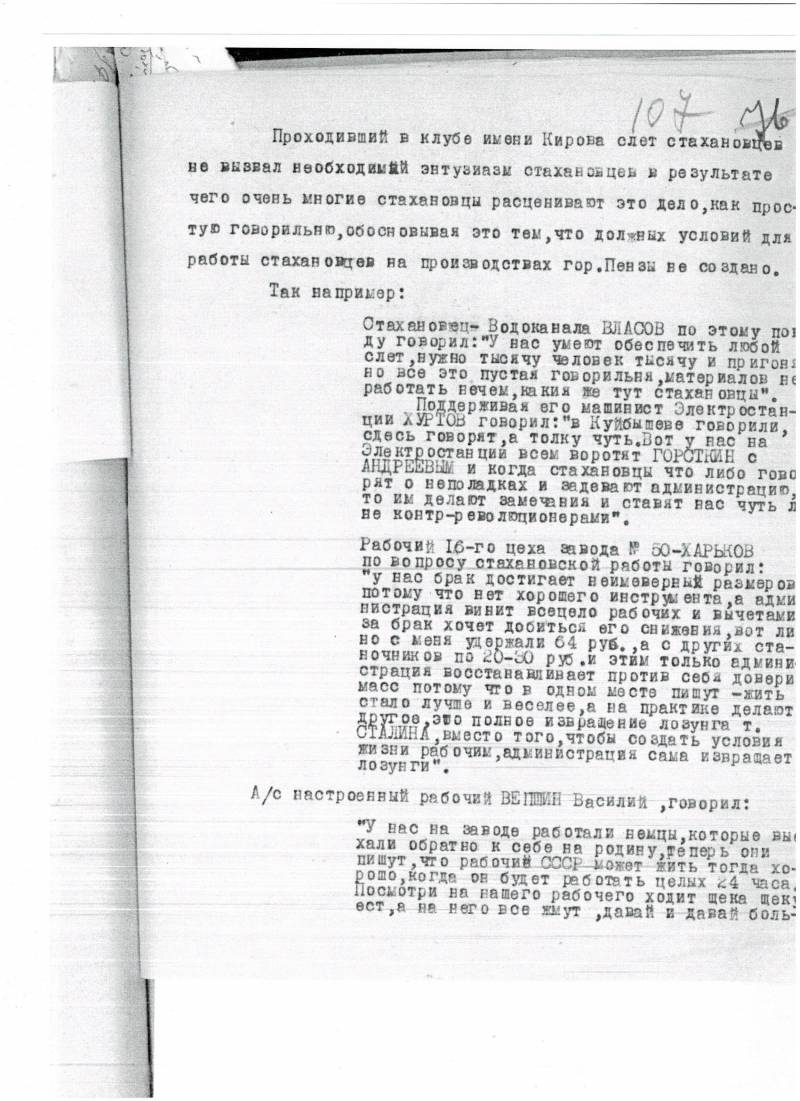 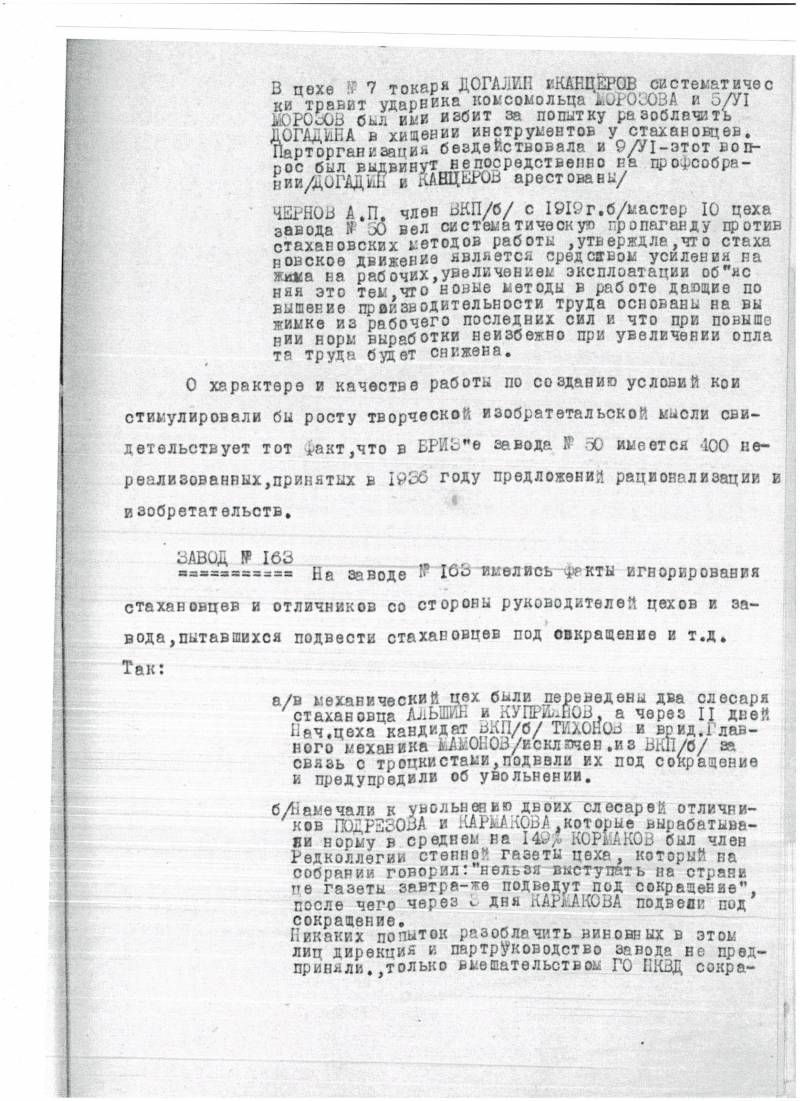 And here the master himself explains what this movement will end for most workers. And ... wasn't he right? And most importantly - why put 100 piston rings in the warehouse when the plant, say, needs only 20 according to plan. There are engines for these 20, not for 100! It turns out a paradox - capitalizes aimlessly, without bringing any benefit. And if, say, you have to switch to a new type of ring, where to put the old ones? Write off in scrap metal? That is, it was possible and necessary to change the norms, but carefully, linking the planned nature of the economy and the possibility of production 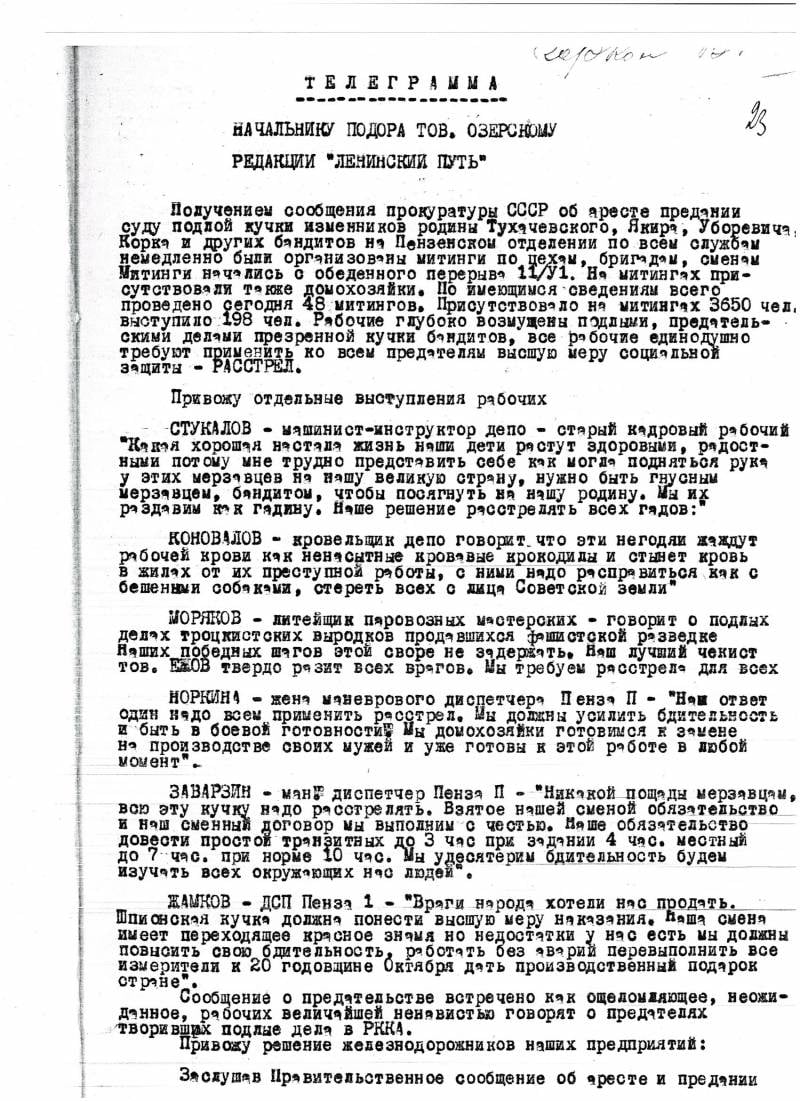 And here is how the general “approvals” were organized. 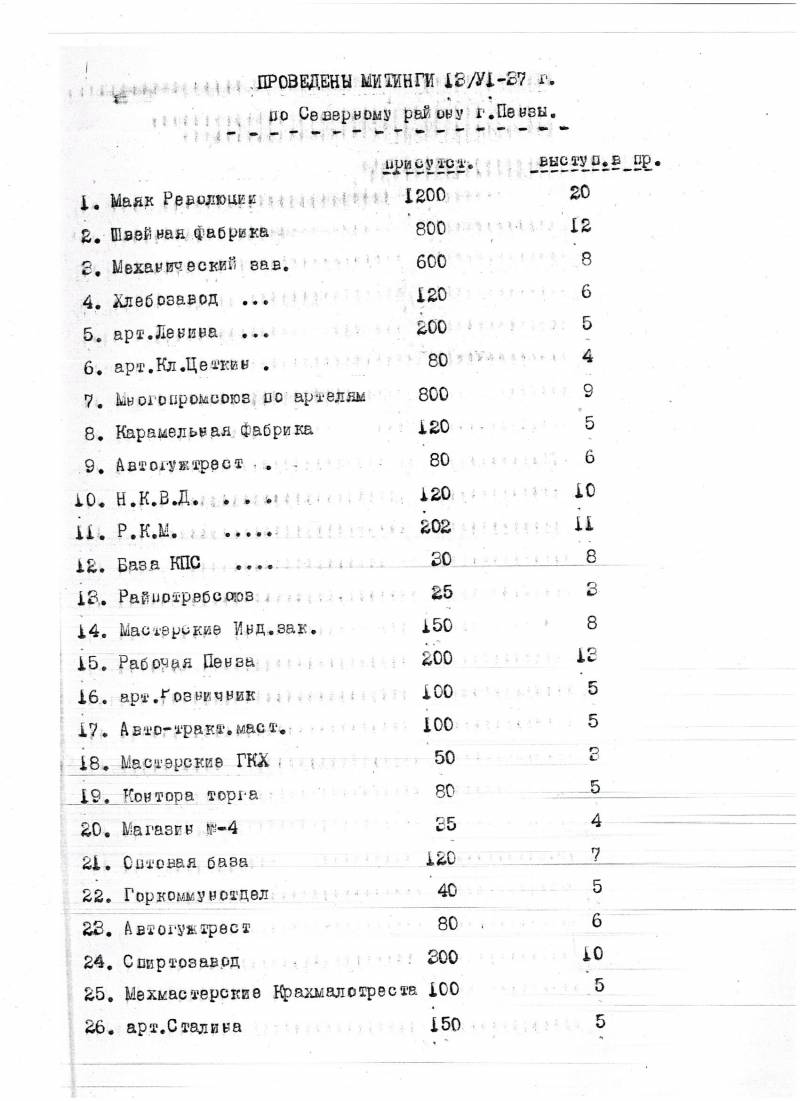 Then it was necessary to report how many people participated and how many performed. Almost half of these reports are in the documents of the City Committee, so in this case, one is enough as a model 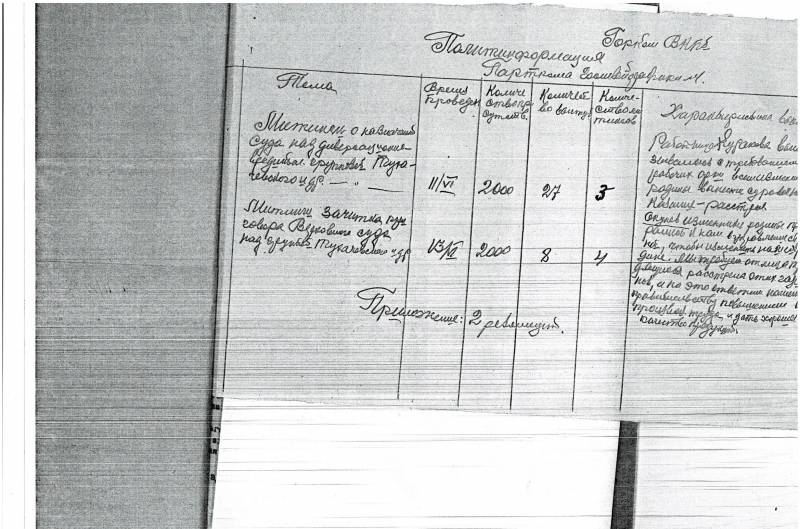 Some of the reports were compiled in such a hurry that they did not even have time to retype them! And in the end, all the speeches came down to what Boxer horse declared in the story “Animal Farm” by J. Orwell - “I will work even more!”
PS I think that it would be just wonderful if some VO visitors (well, not all the same they inject from the morning until the dark night) would visit their archives of the former OK CPSU and see what they have there. Now it’s not at all difficult, as well as working in a regular archive. There we have, how many people are looking for their pedigrees ... Under the same sauce, it’s quite possible to go to the OK archive or directly in the application and write: “I want to collect material for an article about our bright past!” Why not? Any research work on the site will be welcome!

Author:
Vyacheslav Shpakovsky
Articles from this series:
Archival affairs. From “class alien” to “loss of party intuition”
Back to USSR. Mosaic of memory
By the wave of our memory

Ctrl Enter
Noticed oshЫbku Highlight text and press. Ctrl + Enter
We are
Formation of the Soviet propaganda system in 1921-1940The activities of the Penza Regional Committee of the CPSU (b) on the guidance of informing the public about life abroad during the Great Patriotic War (1941 — 1945)
Military Reviewin Yandex News
Military Reviewin Google News
297 comments
Information
Dear reader, to leave comments on the publication, you must sign in.