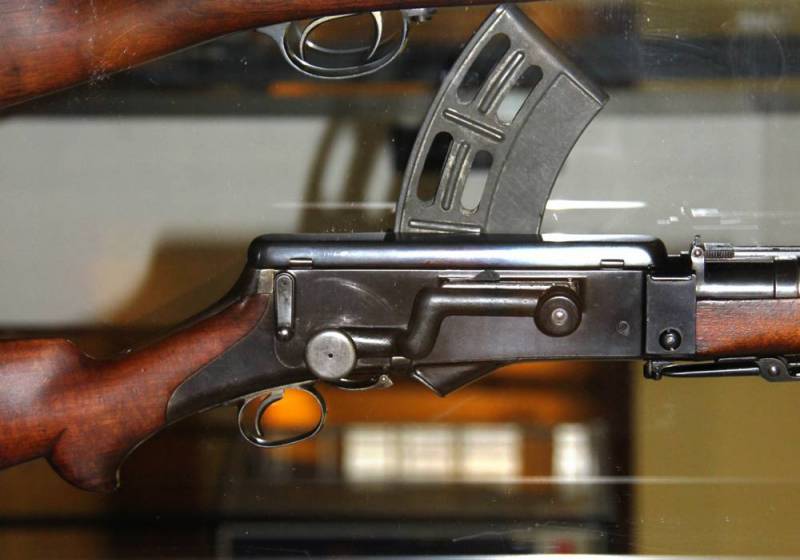 The Madsen-Rasmussen M1896 rifle, presented at the U.S. automatic rifle contest before World War I. View of the receiver on the right

Weapon from around the world. One of the first automatic rifles, adopted and especially used in the First World War, was, as you know, the famous BAR - the M1918 rifle designed by John Moses Browning. Created by him in 1917, under the cartridge .30-06 Springfield (7,62x63 mm), it was intended primarily for arming the US Expeditionary Force, which had fought in Europe before with Shosh and Hotchkiss machine guns. But she fought there a little and really managed to prove herself later, namely on the battlefields of World War II, as well as in the Korean War and the "dirty war" in Vietnam. Of course, it is difficult to call it a classic rifle, since it is very heavy and, being equipped with a two-legged gun, is more suitable for the role of a light machine gun. In this capacity, it was subsequently used just like that, but the fact that it was a “rifle” was fixed forever in its name. This is all known and there is nothing new in it.

Of interest is the atmosphere in which this weapon was created, that is, whether Browning’s development was a unique phenomenon or if there was already something in this area, that is, some samples of such rifles were already created, and he could familiarize themselves with them, see advantages and disadvantages and then strengthen the former and get rid of the latter already in its own design.

And here it turns out that even in the years preceding World War I, the military department of the U.S. Army was considering the possibility of adopting a self-loading rifle, and this despite the fact that they generally already had a Springfield 1903 military rifle. However, in the following 1904 and then again in 1909, this department developed and published a testing procedure for new semi-automatic rifles that could be submitted for its consideration. That is, the designers got at their disposal all the performance characteristics of their future rifles and they had only to tighten their heads and create something that as fully as possible corresponded to these requirements. And, by the way, between 1910 and 1914 it was in the United States that seven different models of self-loading rifles were created and tested. That is, work in this area was quite intense. Among these seven samples were the Madsen-Rasmussen, Draise, Benet-Mercier, Khelman, Bang rifle, a sample from the Rock Island Arsenal and one of the Standard Armz company samples. 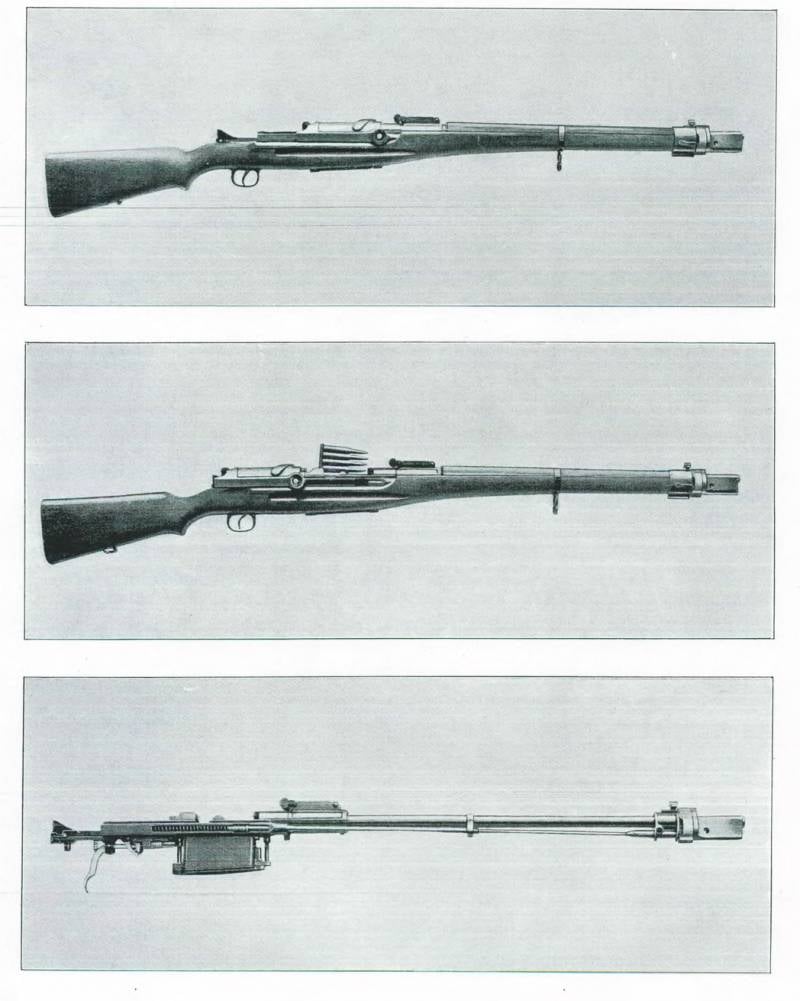 Bang rifle, appearance and device. (Photo from the instruction manual)
Of all this number, two foreign rifles attracted attention. This is the Bang rifle and the Madsen-Rasmussen rifle. The Bang rifle was the first successful semi-automatic rifle presented to the U.S. Department of War. It was developed by the Dane Soren Hansen in 1911. Two copies were sent to the Springfield arsenal for testing, where they made a very positive impression on his staff. Both rifles functioned very well, despite some flaws discovered. In particular, in order to meet the weight requirement, that is, be no heavier than the Springfield 1903 rifle, Hansen made a very thin barrel and removed a maximum of wood from the forearm. All this led to the fact that the trunk began to quickly overheat, and this, in turn, led to carbonization of the inner surface of the box. 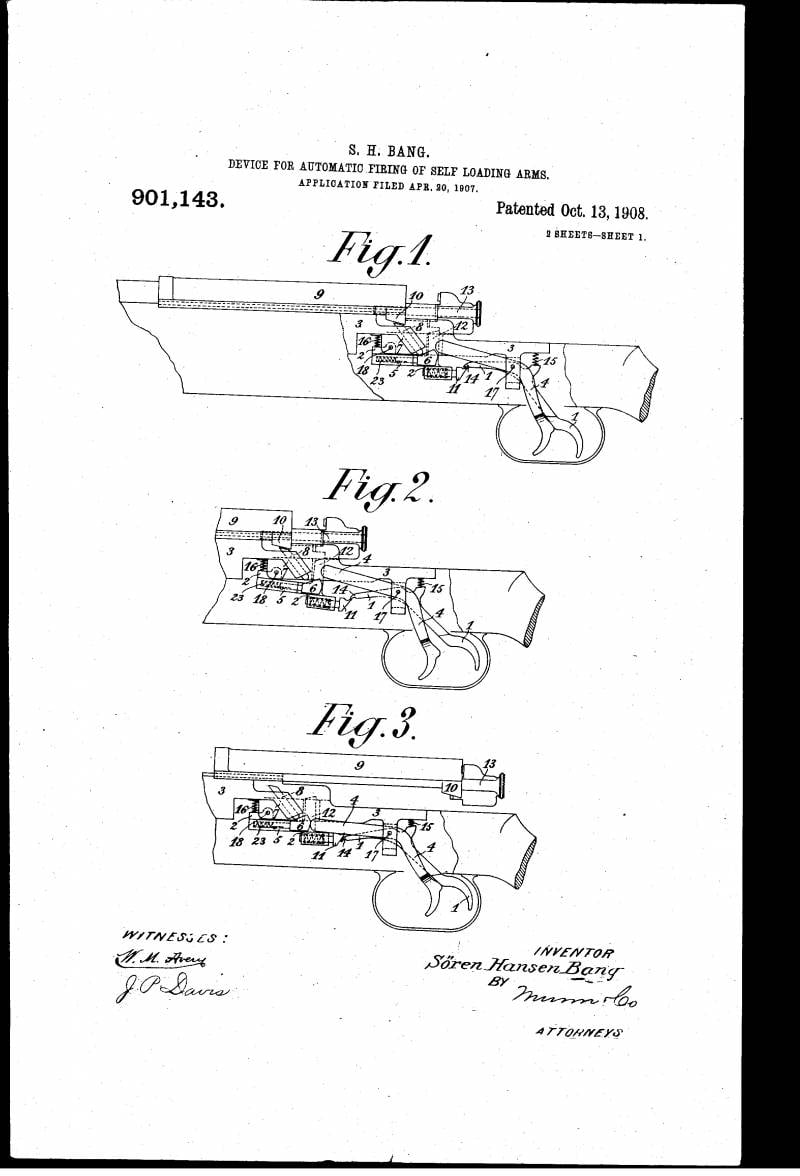 US Patent Office Patent Documentation
The rifle had a very unusual automation system. On its barrel in the muzzle was a sliding cap connected by a rod to the bolt. Powder gases, leaving the barrel, pulled this cap forward, and the shutter, accordingly, due to this action, first opened, and then went back. Further, a return spring compressed by this movement came into play, and the whole cycle was repeated. 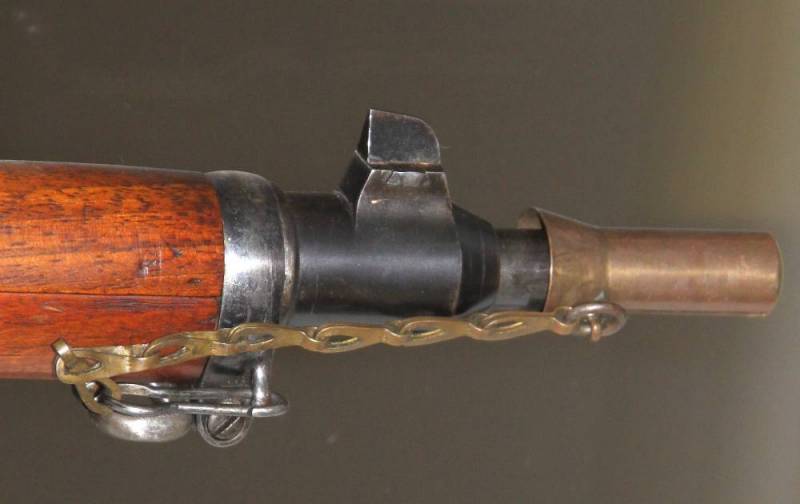 Protective cap on the barrel. At that time was considered an important affiliation.
As for the Madsen-Rasmussen rifle, it can rightfully be called the mother of all automatic rifles in general. Back in 1883, the Danish army officer W. Madsen, together with the director of the Copenhagen arsenal J. Rasmussen (he later changed this name to Bjarnov) began to create a fundamentally new type of rifle, which was supposed to have automatic loading and reloading. In 1886, they completed the development of the project and offered it to the Danish army.

Madsen-Rasmussen rifle M1896. Left view. (Royal Arsenal of Denmark, Copenhagen)
The rifle was developed under the unitary cartridge 8x58 mm R from the Krag-Jorgensen rifle, which had sufficiently high characteristics, and also lacked the shortcomings of cartridges equipped with black smoke powder. 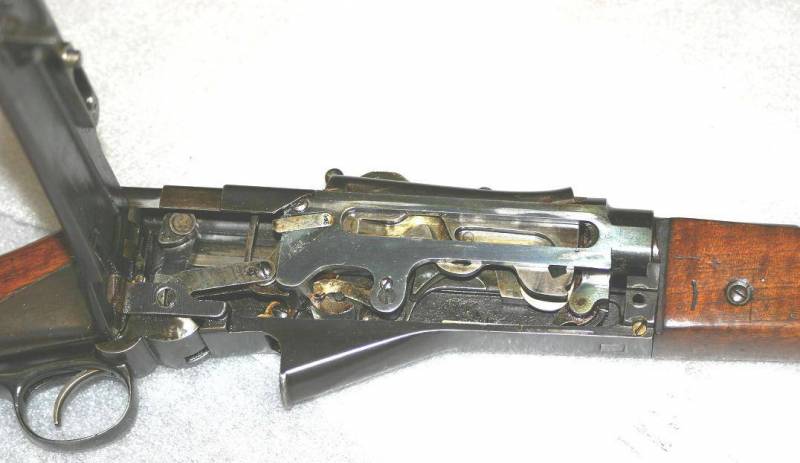 And so the M1888 rifle looked inside. And how could all this work?
The designers proposed a new and very original automation scheme, which used the recoil force of the barrel during its short course. Of course, in our today's opinion, their system looked really quite unusual, but it was quite functional and even got its characteristic name: Forsøgsrekylgevær (“Experimental recoil rifle”).

Madsen-Rasmussen rifle M1896. (Royal Arsenal of Denmark, Copenhagen)
The main part of the rifle was a metal receiver, to which the barrel was movably attached in front and the wooden forend was motionless. In its rear part there was a frame on which the trigger mechanism was mounted and the buttstock was attached with a straight neck. The right wall of the receiver had the form of a door, which was tilted sideways and back to service the parts inside, and in the closed position it was fixed with a latch. The hole for ejecting spent cartridges was located below, and was designed in the form of a triangular pipe. Ready-to-use cartridges were in a holder that was inserted into the grooves of the receiver shaft. Due to their own weight, they descended into the mine, where a special lever applied the next cartridge to the delivery line. The authors did not provide for any springs that facilitated the delivery of cartridges into the receiver, since they believed that the simpler the design, the better.

However, this could not be said about the automatic equipment of the Forsøgsrekylgevær rifle, since it also used a shutter swinging in the vertical plane, and at the same time recoil the moving barrel. Therefore, on the inner surface of the receiver there were a lot of all profiled grooves that interacted with the protrusions and levers, which, firstly, complicated the very design of this rifle, and secondly, complicated (and made it expensive!) Its production. By the way, her trigger system provided firing with only single shots. And only later, when on the basis of this rifle made the "Madsen machine gun", he was changed so that he could shoot continuously.

M1888 rifle. Pay attention to a very thin and short bayonet. And he could not be different, since otherwise he would have upset the balance of the barrel and the operation of automation. (Royal Arsenal of Denmark, Copenhagen)
The designers developed two samples of their M1888 and M1896 rifles, and both of them were adopted and limited, not in mass quantities, used in the Danish army until the mid-thirties of the last century, and only then were decommissioned due to their complete and hopeless obsolescence, as moral as well as physical. Nevertheless, both designers, not stopping there, offered their rifle to several countries at once, and even, including, as we see, in the USA.

The rifle "Smith Condit." Left view. Looks pretty elegant, right?
But the rifle presented by Standard Arms, also known as Smith-Condit, named after its developers Morris Smith and company secretary V.D. Condita was her own, American design. The company, founded in 1907, had high hopes for it. With a capital of a million dollars, she acquired a factory that planned to hire 150 workers and produce 50 rifles a day (source: Iron Age magazine, May 23, 1907). 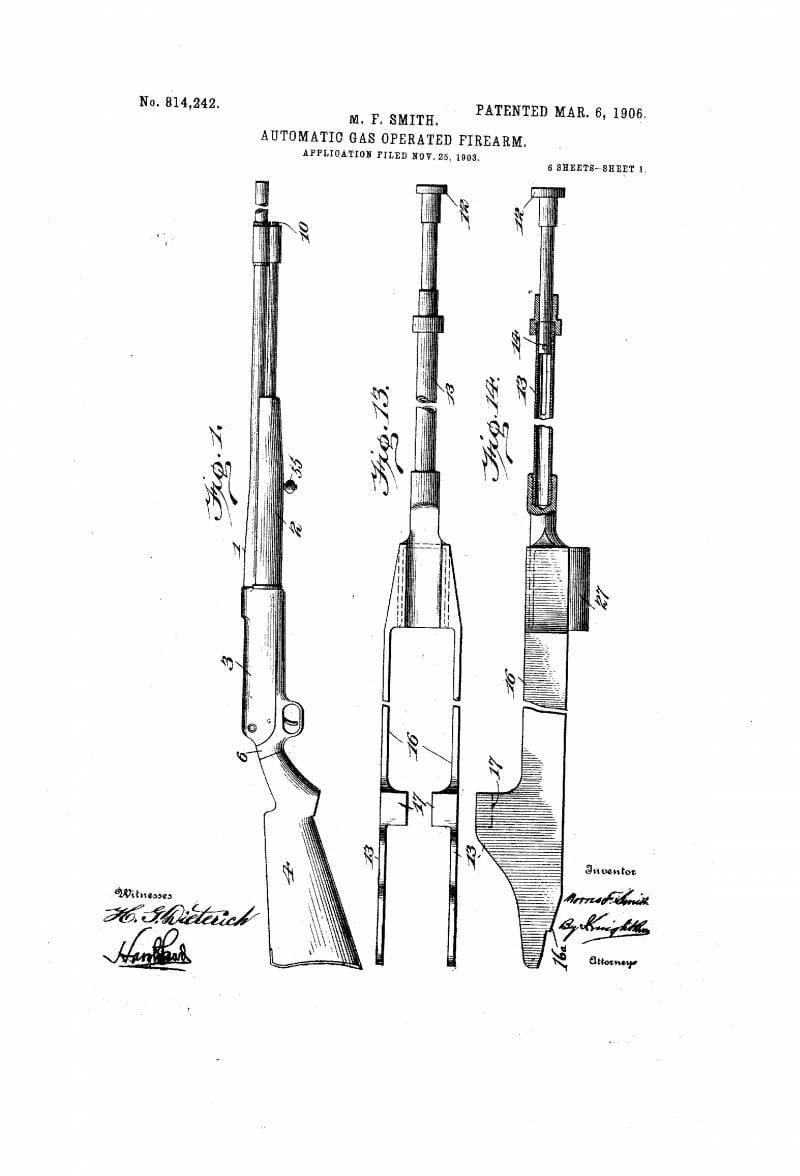 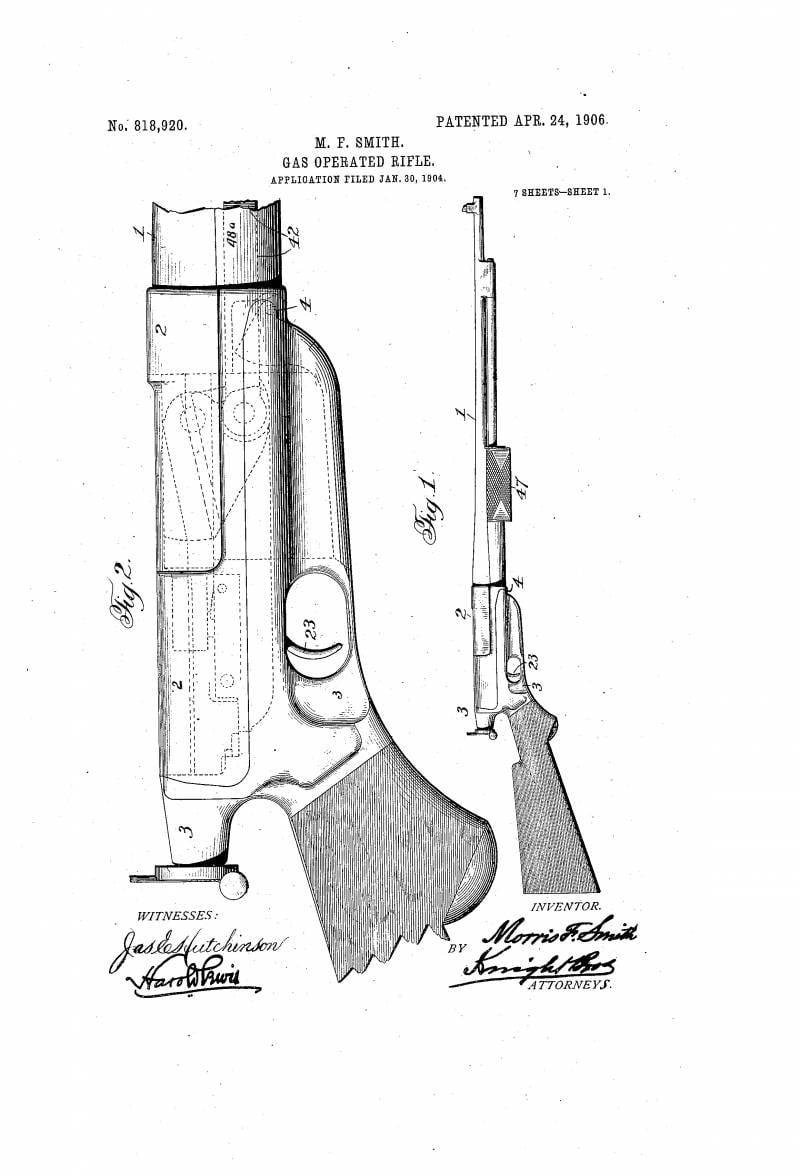 One version of a rifle signed by Morris Smith from 1906 (US Patent Office)
But all these hopes did not come true. The reason is military tests. According to their results, the rifle was modernized, however, the “Model G”, produced in the amount of several thousand units, was possible to sell only in the civilian arms market. The military did not take her.

Smith Condit Right
She was tested twice in 1910 and rejected both times, primarily because they considered her too difficult for military service.

Receiver
As for its design, it had a classic gas piston mechanism located under the barrel. The piston consisted of two parts, the latter having a U-shape and thus “flowed around” a five-shot magazine. When fired, the piston first unlocked the bolt, and it began to move backward, removing and pushing out the shot sleeve, and then, under the action of the spring, went forward, loading a new cartridge into the barrel. The rifle had a cut-off of the gas mechanism, which turned the rifle into ordinary weapons with a sliding bolt, which the military at that time considered very important. For 1910, such a decision should be considered unnecessarily complicated and in the future, by the way, it was decidedly abandoned.

Shutter handle
Interestingly, the test rifle was presented in three different calibres. Under the standard 7,62 × 63 mm springfield cartridge, 30/40 Krag-Jorgensen cartridge, and the third, 7 mm caliber. But in the end, this rifle “didn’t go” under any of them.

Extractor
Thus, Moses Browning had something to look at and rely on when he developed his famous BAR ...

Author:
Vyacheslav Shpakovsky
Articles from this series:
Fort Ellis: the rifle from what's at hand
DX-7: American Kalashnikov
Beretta: the most coveted trophy