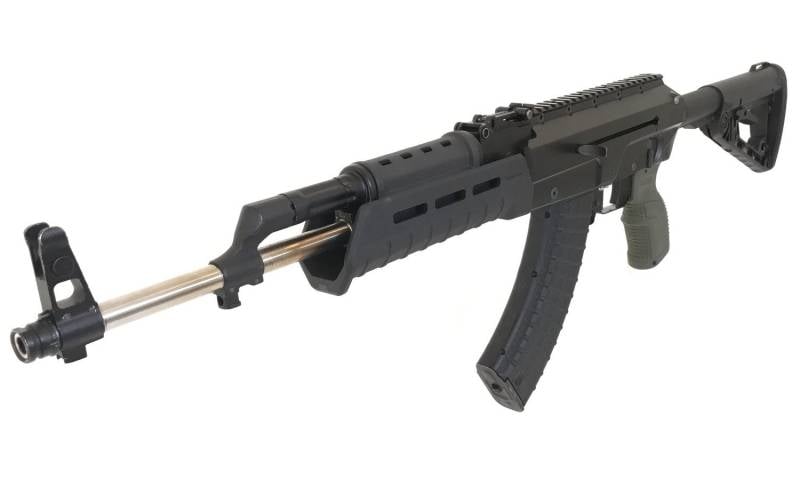 Here is the next novelty of the American arms market: the DX-7 assault rifle

Weapon from around the world. So the people are arranged that some are constantly drawn to novelty. Others, on the contrary, hold fast to the “good old”, but they do not approve of any new products there. A similar phenomenon, as it turned out, is very beneficial for humanity. And if someone, well, let's say, the same Lord God, once created it, he did the right thing by putting a passion for innovations in some people, and on the contrary, making others conservatives. One need only imagine for a moment how terrible a world consisting of innovators alone would be! They would improve everything all the time, because of which an abyss of resources would be spent on various improvements, and society would essentially stagnate. The society of conservatives alone would be just as bad, where everything new would be rejected from the doorway. In such a society, we would all just be sitting in the trees, and all the innovators would be waiting ... a feasting pot, well, so that their meat would not be wasted.

DX-7. Right view
And so, somewhere, innovators take over and we go ahead, then conservatives slow down the avalanche of improvements, and we prudently ride on the old luggage. Moreover, it is especially important to maintain this balance in the production of weapons. After all, by and large, no one needs it, although one cannot do without it. A novelty here is generally appropriate only to the extremes, when old samples are worked out well, just to the limit. As an example, take history с a tank T-54/55. It was a good car, still fighting. In Israel, captured Arab tanks were easily equipped with a new engine and an English cannon of 105 mm caliber, but we needed to create a new T-110 tank for a new 62 mm caliber gun, which didn’t show itself in anything. But it would have been much easier to put a new gun on the T-55, even if the tower was slightly enlarged, than to rebuild the whole tank. But this is ... well, thinking about the topic-problem, because today we will talk about how craving for everything new coexists with traditionally good quality, that is, is it possible to reconcile the interests of innovators and traditionalists within the framework of a market economy. And it turns out that, yes, it is possible and he, this very market, and in some cases allows you to eat fish and ride bones. Well, as an example, let's turn to the recently appeared DX-7 assault rifle - the American patented clone of the Kalashnikov assault rifle. 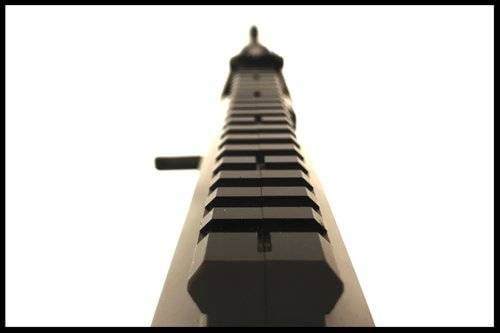 Picatinny rail
To begin with, what all citizens of the USSR and Russia who had dealings with him probably paid attention to. First of all, it is a removable receiver cover, on which it is impossible to mount the sight. That is why it is moved far ahead, which is not very convenient for the shooter. I personally would prefer to have it directly above the protrusion of the guide rod of the return spring, closer to the eyes. Another brand name, but the controversial part of AK is a fuse. Yes, it closes the slot for the shutter, through which, in principle, dirt gets there. Or may fall. But in the classic version, it is inconvenient. And not without reason at the last AK-12 they thought of redoing it by changing the position of the thrust bar. But ... it’s obvious that the fuse must be on both the right and left. And one more thing: the shutter handle on a traditional AK is on the right. This is inconvenient, you have to remove the right hand from the grip handle. On the left it was necessary to do it, on the left! The experience of many samples clearly shows that this weapon does not do worse. 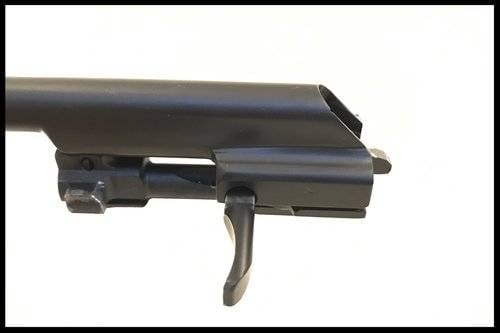 Shutter handle is removed
However, all these comments have no special significance. What does it have? It has only that in the conditions of the market you can create a company and release an analogue of AK with these changes. To the delight, innovators who always want something new. But there are also moderate innovators who need everything to be just the same, but “with mother-of-pearl buttons”.

And if there are such people, and they want, then ... in the market there will always be someone who will fulfill their desire, of course, not without benefit for themselves. There would be money to buy appropriate modern equipment.

And this is exactly what Eric Dienno, creator of DNO Firearms, did. Well, about how he came to this, Eric himself writes like this:

“At the age of 12, I already knew that I wanted to do different things with my own hands. And it just so happened that I had a choice between a welder and a Playstation. And I chose a welder. I spent day and night welding, grinding and collecting carts and choppers. 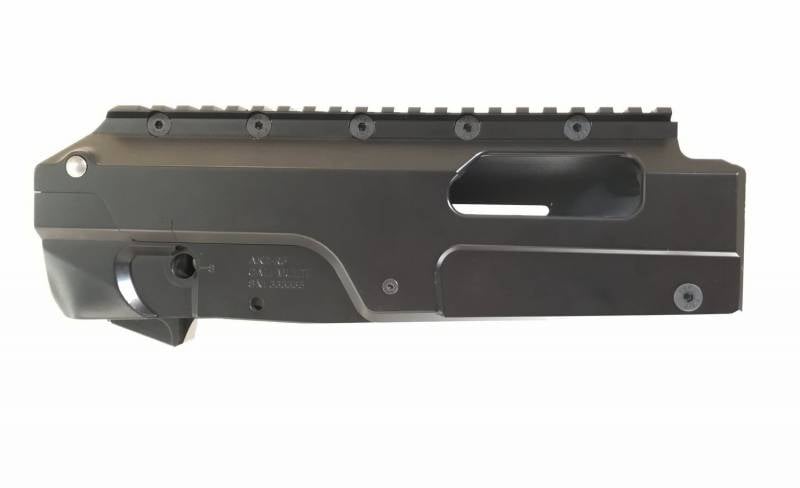 Upper receiver. Under the Picatinny rail, the screw holes for the left and right halves are clearly visible.
Later, I was lucky to engage in racing cars with my brother, who was finishing his master's course in mechanical engineering. Our team's motto was “Quick and Easy.” My brother with CNC made the throttle body of magnesium, and I made titanium manifolds and a fuel supply system. It was here that we became interested in the possibilities of working on CNC machines.

When we decided to start developing firearms components, we realized that we had to set up production ourselves in order to control the quality of our products in accordance with our own standards. It was a business for two brothers working together to create innovative high-quality products in America. Moreover, we would like to have not just a business for the sake of money, but a socially oriented business. So, one of our goals is to donate to organizations that help the mentally retarded. 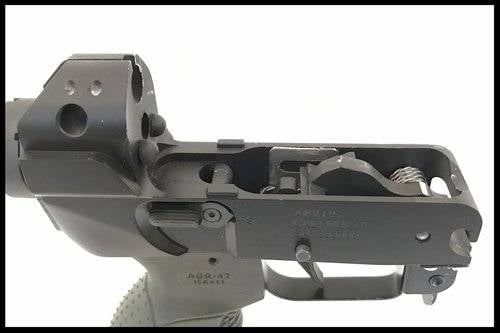 Lower receiver with trigger and butt mount type AR-15
We also want to use our design and manufacturing knowledge and educate our youth so that they too can use their own potential to re-establish mass production in America. Today I see that in China there are too many things. It is completely incomprehensible why America should give in to them.

When we decided to produce our own AK assault rifle, we first of all decided to try to improve the simplicity and elegance of a standard Kalashnikov-style automatic rifle. With more than 15 years of engineering experience, I sincerely believe that we have achieved our goals to improve its design without detracting from the proven simplicity and reliability of the original design. 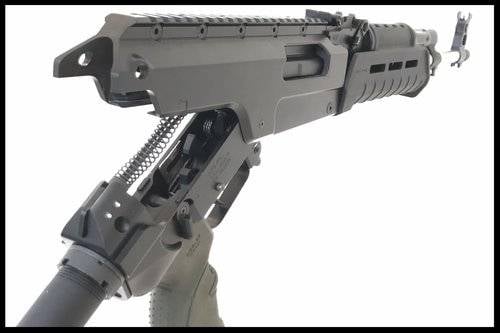 That's how the machine opens, if you remove the rear pin
The DX-7 was conceived as an advanced AK-style automatic rifle by redesigning components that did not work as optimally as possible. Thus, the addition of an upper and lower receiver significantly improved the ability to install modern optics and other furniture functionality. It’s nice to work with the DX-7 because it is equipped with an ergonomic fuse, which is activated by the thumb, and your left hand also moves to a natural place on the left side to charge when changing stores. On our DX-7, you can easily put a sight with a "red dot" or any other modern sight, which is a huge improvement over standard AK. Designing the DX-7 took more than two years and went through several successive stages of testing and redesigning to achieve the optimal result. "We spent time on providing the most reliable and functional firearms system with minimal costs when changing the original sample."

And in fact, if we look at this American Kalashnikov, it is easy to notice that it looks more modern, even purely outwardly. However, external changes are not everything! Inside, there are also quite a few changes. To begin with, the receiver of the machine is double. In it, as in the AR-15 rifles, there is an upper and lower receiver. There are several benefits to this. The first one is that there is no receiver cover, so the entire upper plane of the upper receiver is one solid Picatinny rail on which you can mount a lot of all kinds of sights with the necessary rigidity for their functioning. The second benefit is not so obvious, but it is, although it becomes clear only when the machine is completely disassembled. The fact is that the upper receiver case consists of two halves, which are made by milling of aluminum alloy 6061. That is, the AK receiver was once done this way too, but only technologically it was very difficult. However, the guides for the shutter in the halves of the receiver are still steel, which ensures the receiver of this design long and reliable operation, and also (which is also important!), Reduces its weight. Both halves of the receiver are connected after the barrel is inserted between them, using screws that are staggered to the left and right to screw into the tide under the Picatinny rail. 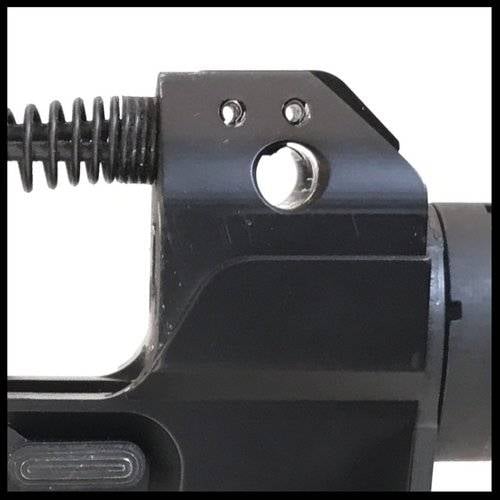 Lock pin mounting location
The shutter is redone in a minimal way. The handle on the right is cut off, and the handle on the left is set in its place. Also, the forend remained unchanged, and the gas-piston mechanism itself, although the back of the return mechanism, for obvious reasons, had to be changed. A butt from the AR-15 rifle was added. 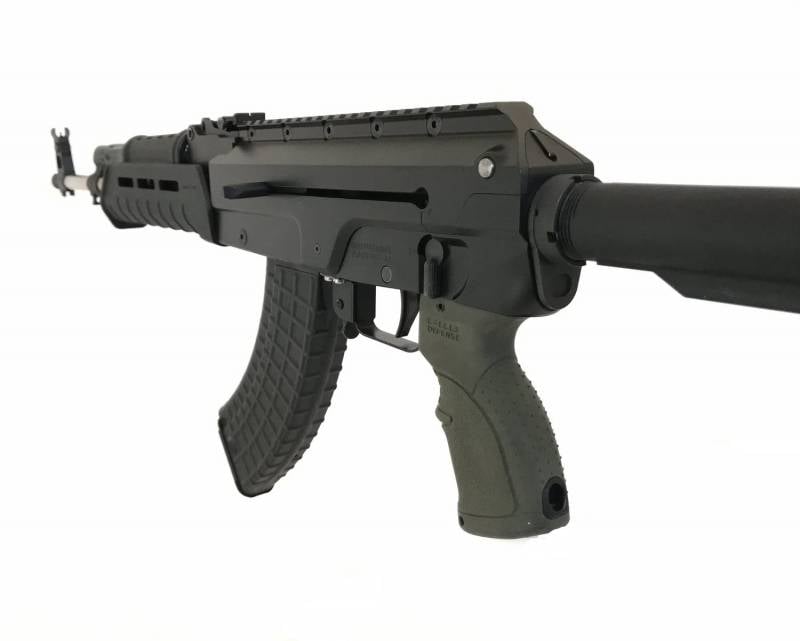 DX-7. Left rear view. The fuse is both left and right, which is convenient.
The weight of the machine without cartridges is 3,26 kg. Stores are used standard, "Kalashnikov", cartridges too, but it is planned to develop interchangeable barrels for other ammunition. Coverage - the most modern "black terracotta."

Naturally, our press immediately reported that the machine had lost the famous "Kalashnikov" reliability, but ... Why does she write like that, although there is no direct evidence for this, is understandable. However, this does not matter. The main thing is that this novelty improves the old, well-known machine, and that is why it can be sold and bought, if only in order to compare which is better and which is worse. For people with money, it matters, it’s interesting, it satisfies their craving for novelty and at the same time loyalty to the good old traditions. Well, smart man Eric Dienno, you will not say anything!

Author:
Vyacheslav Shpakovsky
Articles from this series:
Beretta: the most coveted trophy

We are in Yandex Zen
Small-sized automata (Article I): MA Dragunova, AO-46 Tkacheva, TKB-0116 Stechkina
Automatic machines of German Alexandrovich Korobov
178 comments
Information
Dear reader, to leave comments on the publication, you must to register.