Beretta: the most coveted trophy 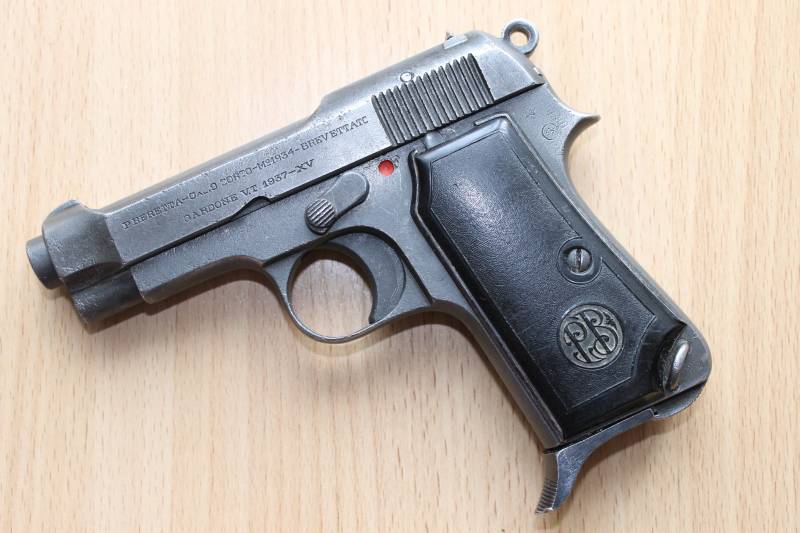 Weapon from around the world. Tell me, what can an ordinary soldier bring with him from the war? Not ours, of course, but, say, American? Of course, something is not very big, because where did he get the junk in the bag. However, if we asked the American military police about this, we would get an interesting answer. After the end of World War II, the Beretta pistol of 1934 and 1937 became the main souvenir for soldiers returning from the South European theater. And obviously there were some reasons for this, right? 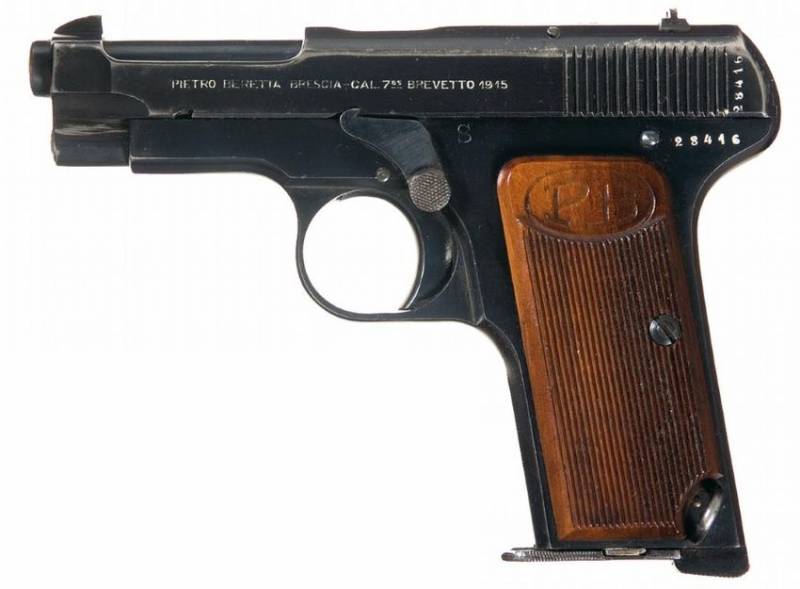 The 1915 Beretta was bezelless, and this series began with it.
It so happened that the Beretta company began to produce pistols in the years of the First World War. Then the army entered the army in 1915 model design Tulio Marengoni caliber 9 mm. In 1917, it was supplemented by a sample under the Browning cartridge of 7.65 mm and finally a 1922 model with an enlarged cutout on the frame above the barrel for ejecting cartridges, which made it different from all other pistols of this time. So at the end of the 1920s, the company had three models of pistols in its lineup. The newest model was the M1923 pistol, but it was not accepted into service by the Italian army. The main difference between this model and the previous ones was the open trigger with a hole on it. As a result, the company decided to start developing a completely new pistol that would attract the attention of the military and allow it to receive a profitable military order.

And I must say that the work was crowned with success: the 1931 model appeared, which had all the combat characteristics of the 23rd model, but had a more compact design, and was lighter than its predecessor. The new pistol was developed under the classic Browning 7.65 cartridge, which was distinguished by high combat characteristics. And this pistol became the basis for the creation of the next model M 1934, from which the previous sample differed only in three features: the line of the tilt of the handle; wooden overlays on the handle; and some changes to the trigger. 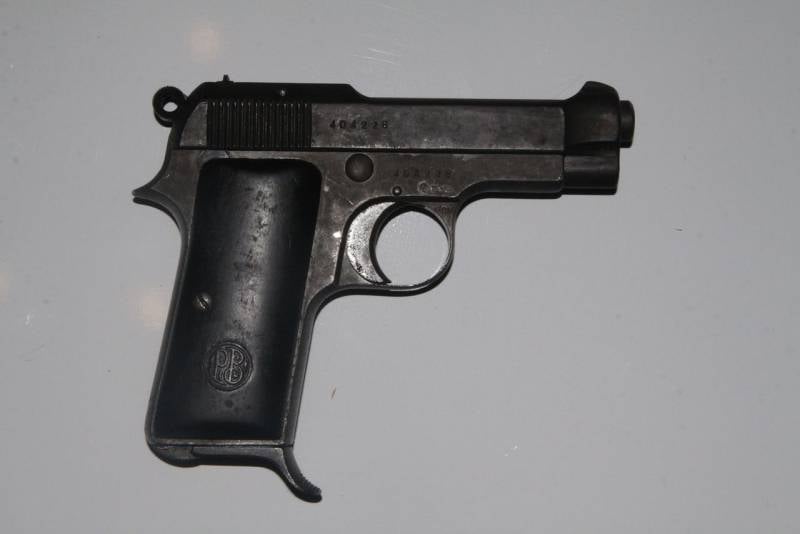 The 1931 model already had all the signs of a future that has earned universal acclaim.
There was no special documentary evidence of the production of these pistols, although we know that it was quite limited and ceased by 1935 with the advent of the 1935 model of the same caliber. A number of 1931 models were acquired by the Navy. fleet, while some, supposedly very small, were sold in the civilian market. The serial numbers of these pistols for some reason begin with 400. So one instance of the 000 civil model was, for example, numbered 1933, and the other 402 had a number higher than 000.

Weapons made for the navy are easily recognizable by the medallion on the handles with the inscription RM and an anchor between the two letters. Civilian samples have a classic medallion with a monogram RV.

Several samples of M 1932 have been preserved, where the number 2 is clearly stamped on top of the number l. Based on this, it can be assumed that this pistol was not mass-produced, but was manufactured in small quantities as an experimental prototype or sample for delivery to the military commissions, which at that time were looking for a new pistol for the Italian armed forces. In fact, the 1932 model is identical to the future 1934 model, which was officially adopted by the royal army. The only difference was again in the handles, which at first had “cheeks” made of wood, not bakelite, but this design seems quite normal for the experimental sample.

In addition to the already-classic 7.65 caliber, the 1932 model first used the .380 ACP (9 × 17 mm) Colt-automatic cartridge, which was also one of the many creations of J.M. Browning. The cartridge in Italy was renamed to 9 “corto” (short), obviously in order to avoid confusion with the 9 mm cartridge of Glisenti, whose cartridge was several millimeters longer and therefore nicknamed the 9 mm “lungo” (long) - all that led to a noticeable confusion among 9mm caliber cartridges intended for use in Italian automatic pistols.

In the first half of the 30s, the new Beretta pistols were subjected to a series of comprehensive tests in the Italian army and the police. The pistols were compared with the German Walther PP, but in the end they liked their own gun more and was adopted by the name Modello 1934 calibro 9 corto. 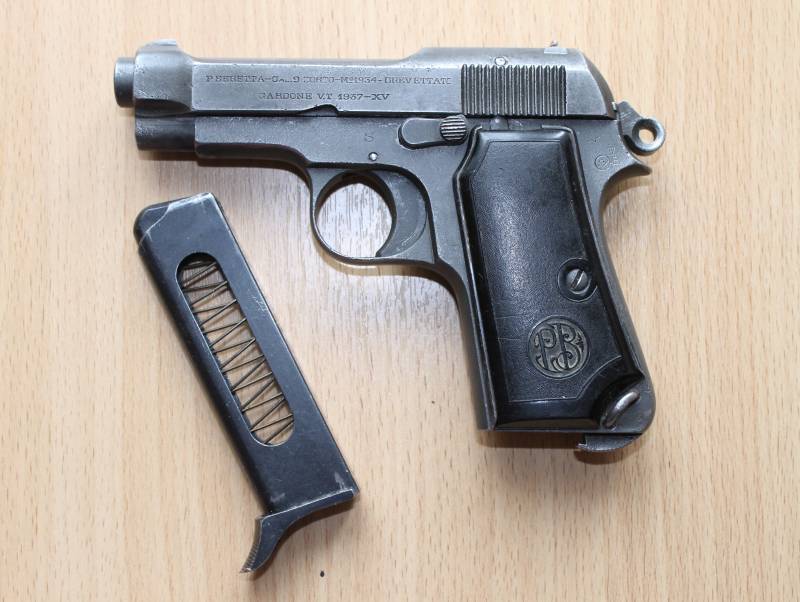 "Beretta M" of 1934 and release of 1937 with the removed store. Strap bracket and magazine latch clearly visible
The adoption of this new 9 mm pistol by the army did not prevent, however, the development of the 7,65 caliber version, the 1935 model, the pistols of which were supplied to the Navy and the Air Force, and were produced regardless of the production of a larger caliber model.

It is interesting to note that these two pistols, which are almost identical, have, nevertheless, been arranged in such a way that it is impossible to replace components such as trunks or magazines in them.

It is also interesting that although the “Model 34” was considered a completely new model and was numbered separately (the numbers start at 500), the “Model 000” was still considered a new version of the 35 model and was numbered in the same series as its predecessor, as indicated by an analysis of their serial numbers. It should be added that there is also a “Model of 1931”, but in fact it is quite rare. This is nothing more than a commercial version of 1937, differing only in the inscription on the side surface of the shutter housing and the absence of military markings.

In the late 30s, Beretta also began experimenting with alloy frames for its pistols. In the postwar years, this version of the 7,65 caliber pistol had some commercial success, while the 9 mm version with the new frame was completely unsatisfactory and its release was continued exclusively from steel. 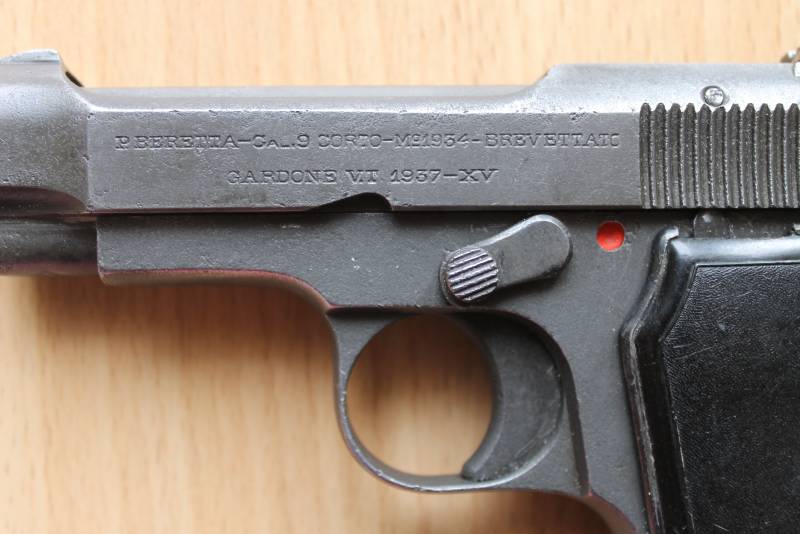 Marking
Experts note that the Beretta M1934 (like the 35-year-old model) was a high-quality weapon and practically had no competitors in its functional class. Despite the import ban, and perhaps just because of it, this automatic pistol became an attractive military trophy for soldiers of all armies who crossed the land of Italy during the Second World War. Incidentally, the Italians write about this, but among the memoirs of the Americans there is evidence of this.

Its advantages include high reliability and good mobility, qualities that are necessary for any weapon on which human life depends in an extreme situation. 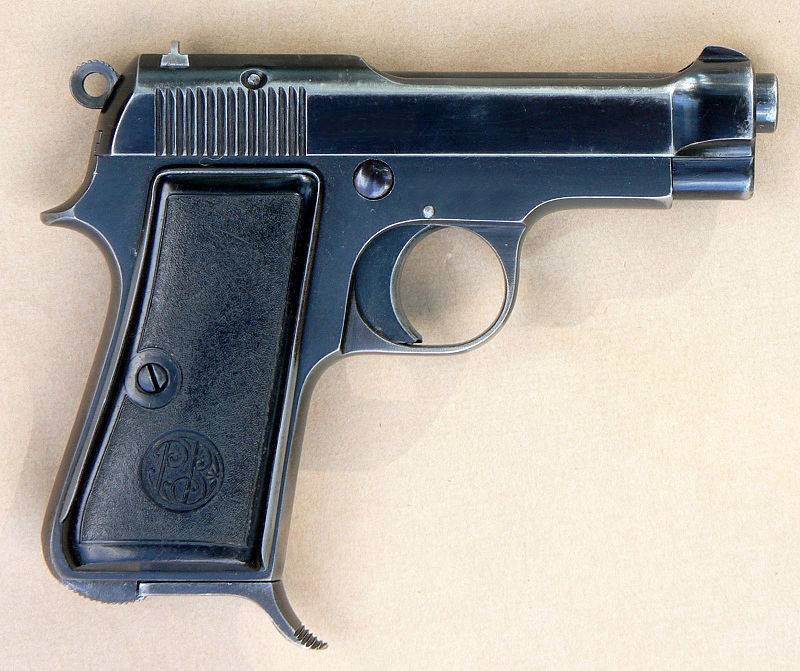 "Beretta" M1935. Right view
To this should be added the minimal cost and simplicity of any repairs necessary for this gun, which was required only in rare cases. In addition, he did not need high-power ammunition, which facilitated the process of learning how to shoot it. And it is very significant that all Beretta models are still in demand many years after they were discontinued, and the market quickly absorbed the masses of these pistols. 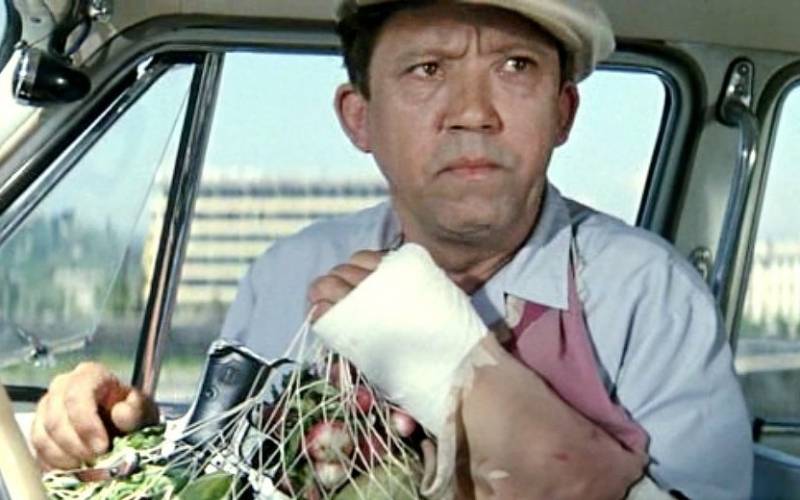 It is interesting that one of them even got into our Soviet cinema, where it was Beretta M1934 that was armed with none other than Semyon Semenovich Gorbunkov, the protagonist of the popular comedy The Diamond Arm. Why was he given this particular gun? You might think that our filmmakers didn’t find other small-sized pistols, but again, it means they weren’t! Here he is sticking out in his bag ... 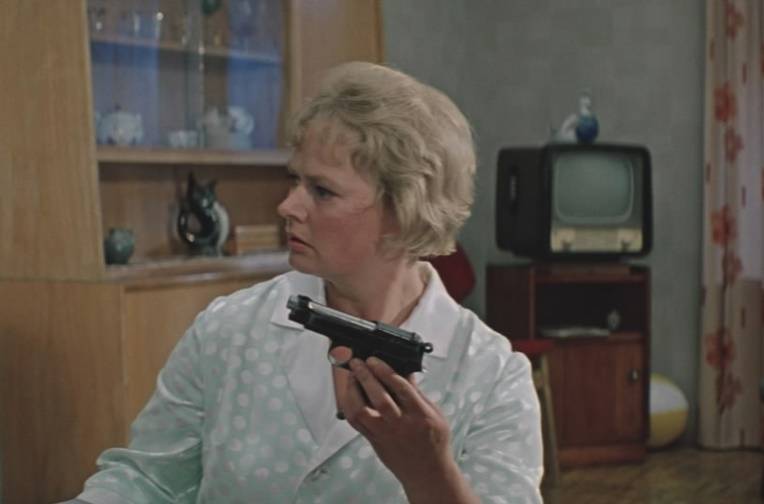 "Where did you get the gun and the money from ?!"
The production of M1934 and M1935 continued throughout the war, although its total character on the quality of the weapons produced in Italy, and not only in Italy, certainly greatly affected the course of the war, especially with regard to weapons fired in 1944 and 1945. Fortunately for these guns, they were so simple that any manufacturing defect only affected their exterior finish and not their “performance” or safety. 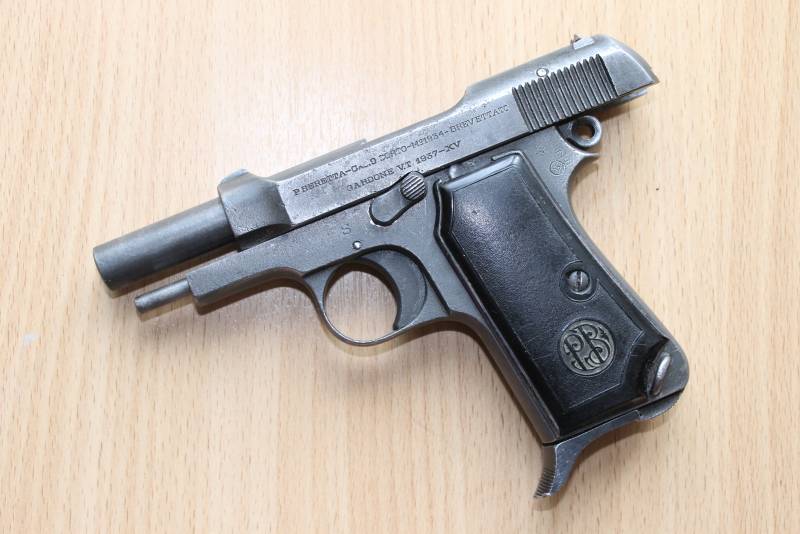 Beretta with a shutter on a delay
The pistol of the 1945 model produced in the last months of World War II does not have a neat external finish and looks rude. The serial number and caliber designation are the only markings on these pistols, and they are marked on the frame just above the trigger guard. 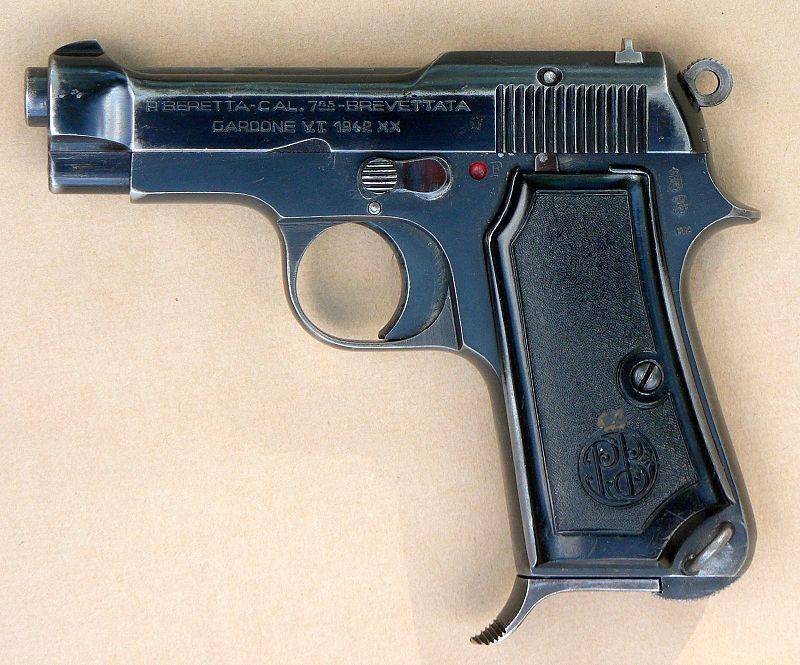 This is what the Beretta M1934 looked like in 1942
Interestingly, during the time when the production of pistols fell into the hands of the Germans, the criteria for serial numbers changed. The simple progressive numbers that Beretta always used were replaced by a mixed code of letters - usually German, and numbers. In any case, there are several samples with the inscription "Pistola Beretta Cal 7.65 M35 SA Armaguerra-Cremona 1944" along with German numbering. 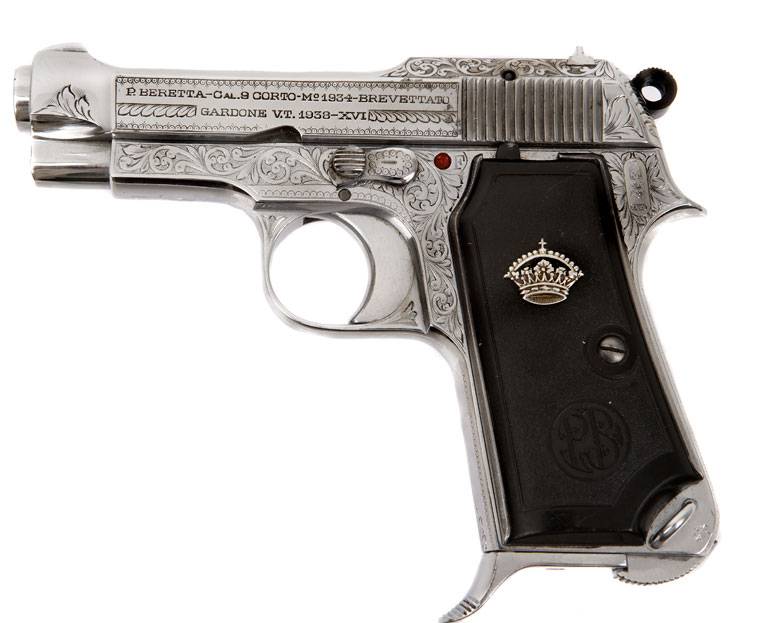 "Beretta" M1934 with engraving
I personally managed to get to know this gun and hold it in my hands. Although his tilt of the handle is not so great, it is very convenient to hold it in your hands. A big role in the convenience of retention is played by the “spur” at his store. Thanks to the "spur" and the handle fits comfortably in the hand, and the store is removed without much difficulty. True, in the traditions of his time, designers provided the gun with a magazine latch at the base of the handle. The spring is tight and shifting it is not very convenient. But there is no danger of losing the store. 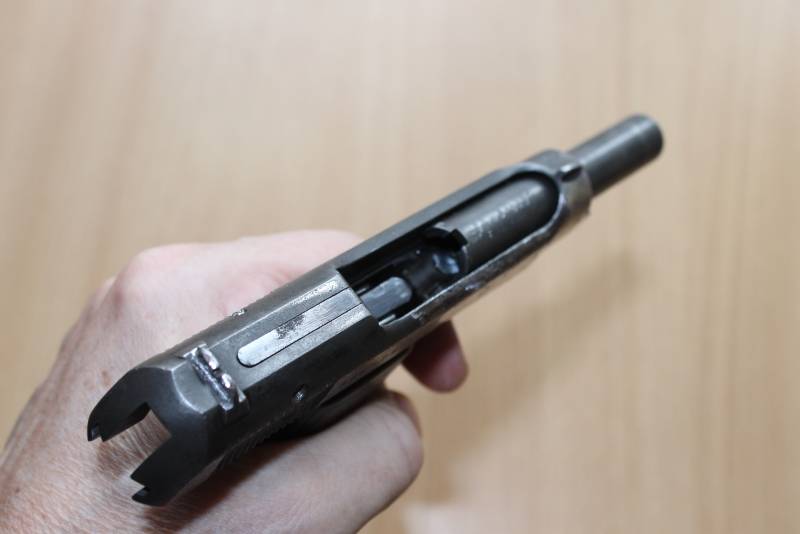 Beretta in the hand. The spring of the extractor is clearly visible, ensuring the ejection of the sleeve straight up
The store feeder is also a shutter lag. As soon as the cartridges are used up, the shutter abuts against the protrusion of the feeder and remains in the rear position. Only when the empty magazine is removed does the bolt go forward, but only if it has not been fixed in the rear position with a safety catch for the recess in the bolt. Such locking of the bolt, in particular, is necessary for incomplete disassembly of the gun. Also on the left side of the bolt there is a stud - an indicator of the presence of a cartridge in the chamber. Of course, one would have to shoot from it in order to finally say whether it is convenient or not, but what is not is not. So you have to be satisfied with at least that.