Fort Ellis: the rifle from what's at hand

Weapon from around the world. To begin with, let's recall the Strugatsky brothers ’popular science fiction novel“ The Predatory Things of the Century ”written by them in 1964. There were many interesting predictions about the future, but unfortunately of a limited duration. In 1974, this work was read as a revelation. In 1984, almost as well. In 1994, with a sense of surprise: how are the authors, living in the USSR 30 years ago, everyone guessed so accurately. But in 2004, the story became obsolete at once. It did not have computers, laptops, mobile phones and electronic games, which by this time flooded the whole world.

However, there still remained this, that which is being carried out right before our eyes:

“We are constantly confused by the talk of terrible new inventions. We have already sat several times in a similar puddle. When Mhagana and Buris turned to the UN complaining that the separatists were using a new type of weapon - freezing bombs, we rushed to search for underground military factories and even arrested two of the real underground inventors (sixteen and ninety-six years old). And then it turned out that these inventors had nothing to do with it, and the terrible freezing bombs were purchased by the separatists in Munich at the wholesale warehouse of refrigeration units and turned out to be defective super freezers. True, the action of these super-freezers was really terrible. In combination with molecular detonators (widely used by underwater archaeologists on the Amazon to scare away piranhas and caimans), superfreezers were able to instantly lower the temperature to one hundred and fifty degrees of cold in a radius of twenty meters. Then we persuaded each other for a long time not to forget and always bear in mind that nowadays literally every month there are a lot of technical innovations of the most peaceful purpose and with the most unexpected side effects, and these properties are often such that violations of the law banning the production of weapons and ammunition just become meaningless. ”

This is all to the fact that if you wish today you can make an automatic machine out of a water pipe, by the way, and a mortar too, use a drone drone as a “flying bomb”, and place the firing device directly in your mobile phone. Technical creativity “from everything at hand” is developing ever wider. When it is not necessary to squeeze the hull of the boat model out of the log, but you can make it by cutting and cutting out all the details from plywood or polystyrene on a CNC machine and laser cutting. You can buy a 3D printer and print on it any design, up to pistols and rifles, both plastic and metal. By the way, grenades for a 40 mm zinc alloy grenade launcher were already tried to print and it worked. It turned out to print out a plastic model copy of the FAU-2 missile, and one that only needs to insert an engine into it and it will fly. Well, if you insert a "engine" stronger? And in the nose pour TNT? Ready high-explosive action will turn out, that's it!

The same rifle, right view
Well, if you live in a country where the free sale of weapons and the manufacture of its new models are allowed, then those amateur designers who are interested in doing this business, there is simply a very wide field for activity. Take it, buy what you want parts and design! Satisfy your craving to create something new that has not yet existed, let it be a new pistol, machine gun or rifle. 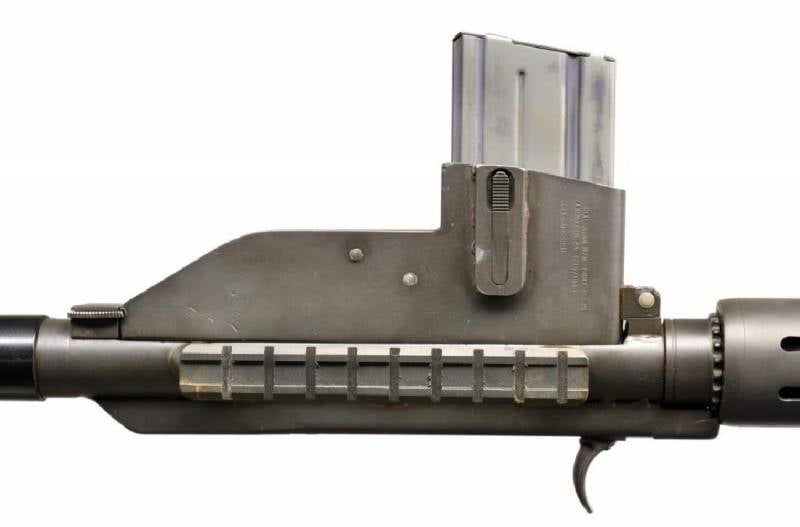 Top view of the receiver of an Ellis rifle. You can clearly see the makeshift USM case connected to the receiver of the store, as well as its fastenings to the receiver at the front and rear, the magazine latch and Picatinny rail
By the way, this is what Wilfred G. Ellis (1935-1994), an American police officer and master gunsmith from Abington, Pennsylvania, who clearly had a craving for the construction of new types of firearms, did just that. In his house, he equipped an excellent workshop in which he was engaged in restoring old weapons and at the same time creating new ones, using for this purpose the parts of weapons available on the market. And in 1986, in just 15 days of work, he created his own 5,56 mm caliber rifle under the 5,56 × 45 mm NATO cartridge, which he called “Fort Ellis”. And he did it, of course, not from scratch, but using the details of rifles such as the AR-15, M14, M16, the M60 machine gun, the AK47 assault rifle, in a word, what his hands reached, that’s the point. And it should be noted that his rifle ... turned out. 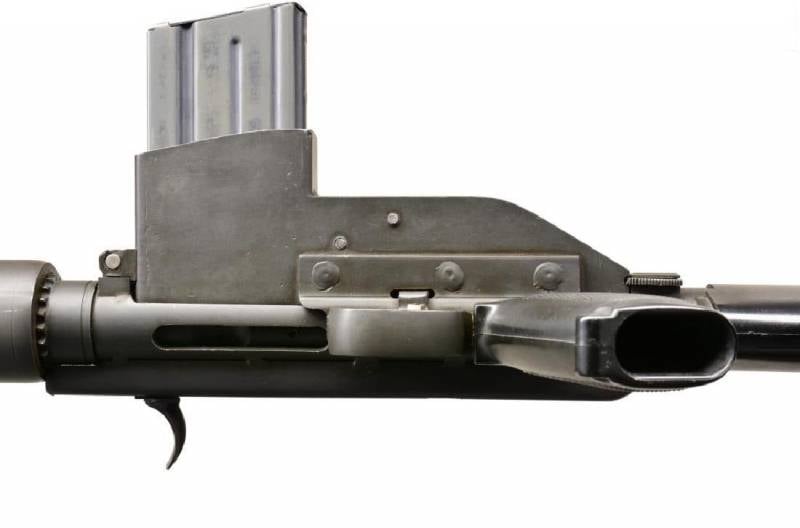 View of the same detail from below. Well visible hole for the extraction of spent cartridges
And it didn’t just work out, but it turned out to be truly unique, since it is much simpler than the AR-15 and all other models, but at the same time it is not inferior to them in combat effectiveness. That is, for mass weapons it is more profitable than the same M16. Much of his design is simply the “cubes” that he put together. So, for example, the arrester on the barrel was taken from the M60 machine gun. The gas venting device on the barrel and the gas piston were borrowed from the M14 automatic rifle, the barrel from the AR15 rifle, and the pistol grip and butt from the M16. And from the AR-15 was taken a flat magazine for 20 rounds, the trigger and the entire bolt group, that is, almost all the main details. 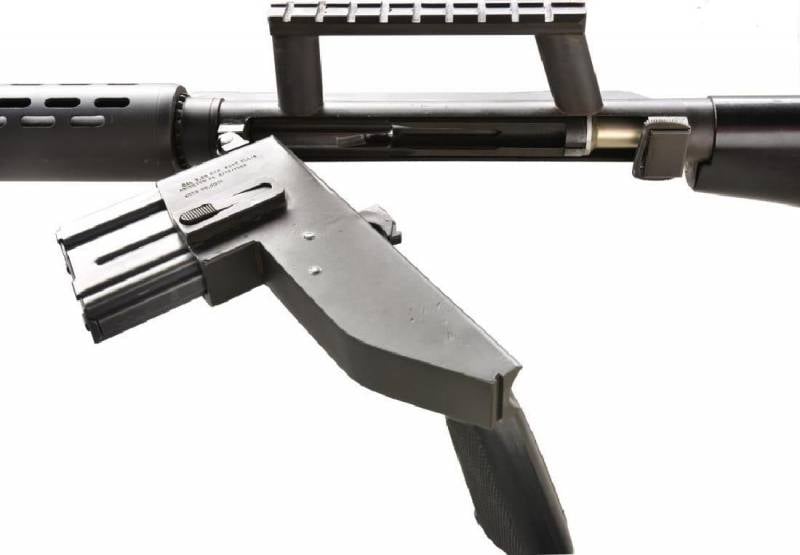 And so she leans back ...
But then the original design of the author of the rifle went on. To begin with, having placed a gas outlet unit from M14 on the barrel, Ellis did not conduct his piston-push rod shutter under the barrel, but brought him to his right side, where he moves under the barrel cover. The shutter from the AR-15 is rotated 45 degrees to the right, respectively, and its tube, into which the original hot gases enter the barrel, is tightly welded, because the push rod now rests on it, which in turn is affected by the gas piston during a short stroke . The shutter, as in the original rifle, with the shutter handle is not rigidly fastened. The shutter handle is welded to a metal bar with a through hole drilled in it, through which the pusher rod goes back and forth. That is, the shutter itself, and the handle itself, and they only interact when you cock the shutter yourself, and when the pusher rod acts on it, it remains stationary. In fact, this is the design of the same AR-15, but only equipped with a gas piston instead of directly affecting the shutter with powder gases.

Shop used standard
The USM designer, as well as the store’s receiver, is located in a makeshift case on the left side. Moreover, the pistol grip from the early sample AR-15 (without a protrusion under the finger) is located where it is supposed to, that is, from below under the cylindrical receiver, and is connected to the USM case by screws. This part is attached to the receiver in two places, a spring-loaded lock in the back and a T-shaped stop in front. Inside the cylindrical receiver there is a return spring and a buffer - everything, like the AR-15 and M16. 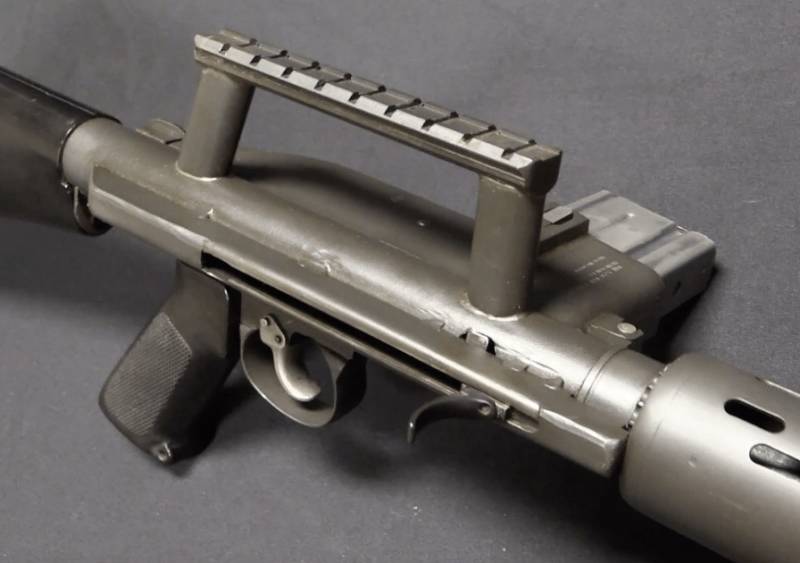 In this photo you can clearly see the tide, which is welded to the receiver, and in which the shutter cocking handle moves. By the way, as this quality, the designer used the trigger from the AR-15, attaching it to a metal bar
Since the trigger has now changed its position with the trigger, the designer introduced a pusher lever into it, which puts pressure on the sear instead of the trigger, but from its impact, after which the entire trigger works as expected. Accordingly, the store is also inserted on the left, by analogy with the power of the German rifle FG-42, in which the store is also inserted on the left.

So, on the left side of the receiver is the magazine receiver, combined in one housing with the trigger and pistol grip, on the right side of the receiver there is a rush under the bolt handle, but where are the cartridges extracted? And they are extracted through the hole below, which opens when the slide frame moves back. And this is convenient, by the way, since they don’t fly in the face of neighbors and cannot get someone by the collar. 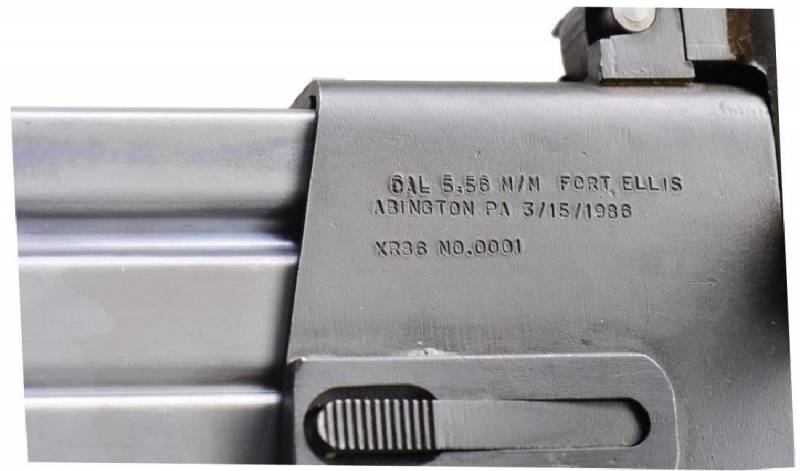 The rifle has such a designation and even a number
There are no sights on the rifle, but there are two racks on which the Picatinny rail is welded, which allows you to install any sights on it. On the trigger case there is also the following "company" designation of this rifle: "Cal 5.56 m / m FORT ELLIS / ABINGTON PA 3-15 / 1986 / XR86 No. 0001".

Her stock is ordinary, plastic, again from the early M16 sample, which is easily removed from the pipe in which the mainspring is enclosed. True, the author added two fixing metal plates to it and to the butt.

It is known that its creator fired about 860 shots from it, and only on one of the last ones the bottom detached, but this is more likely a defect in a cartridge, not a rifle. In general, the designer got a very simple, and cheap rifle for a total war, although why he made it himself is unknown!

We are in Yandex Zen
Small arms trunks
What should be a modern sniper (part of 1)
56 comments
Information
Dear reader, to leave comments on the publication, you must to register.