From offensive to defense. The battle of Lyubachev enters a new phase

October 18 2019
19
So, the advance of the strike group of the 8 Army was unsuccessful (see 8 Army strike group tragedy). 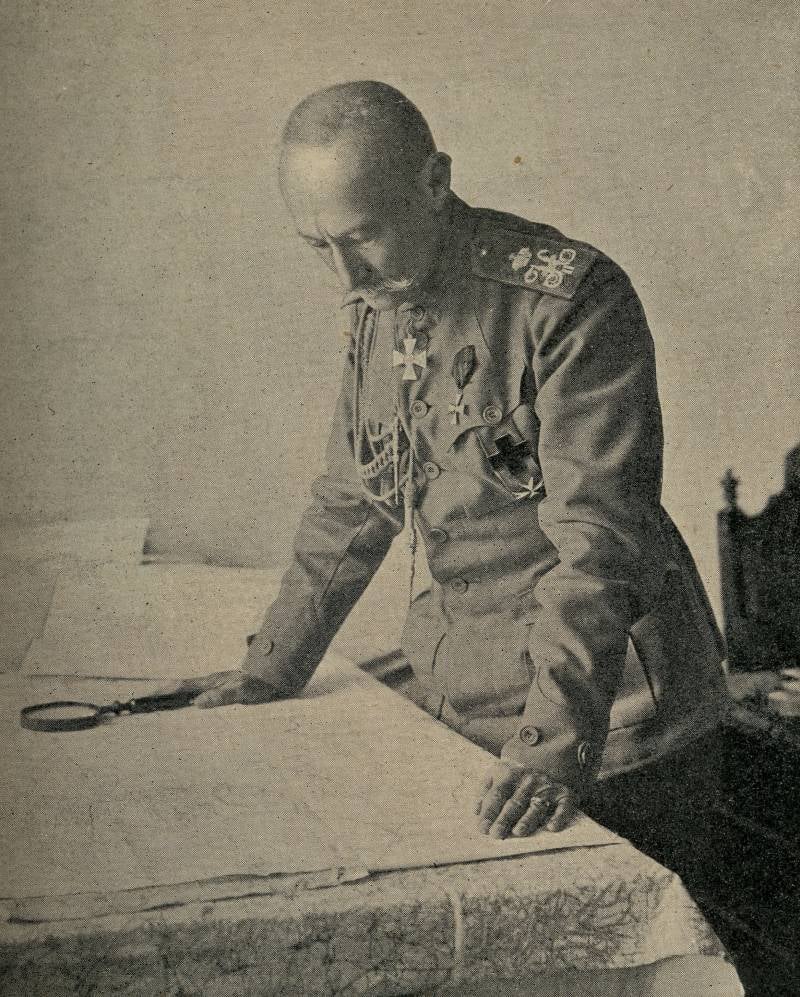 Adjutant General A. A. Brusilov for the map

A. A. Brusilov tried to shift the blame for the unsuccessful offensive of the strike group of his army and the heavy losses in its units to the poor preparation of these formations, since they arrived from another front. Moreover, the general assigns to these corps a certain share of responsibility for the premature fall of Przemysl. So, he writes in his memoirs that when 2 attacked the aforementioned corps from Lubachev to the south-west, a frontal attack of the enemy was obtained, which had many machine guns and huge artillery, while the advancing neither machine guns nor guns had enough, and even an artillery attack , which was supposed to prepare an infantry attack and support the latter, due to a lack of shells could not take place. The general writes that it could be said in advance that this untimely and insufficient fist, launched in an inappropriate place, will not produce tangible results. As noted by A. A. Brusilov, these 2 corps were of "very high fighting qualities," but, oddly enough, "poorly trained, like most of the troops that arrived to us from the north, and they made an attack not very harsh. Shortly after this attack, Przemysl fell ... ” One gets the impression that it was not the 8 Army command that was responsible for this attack, but someone else. A. A. Brusilov writes about these events as if he was only an outside observer. Let us leave this to the conscience of the honored commander.

The end of the offensive phase of the battle of Lyubachev

The attack of the strike group of the 8 Army was drowned. The offensive of the 3 Army was also unable to realize its goal - by delivering a deep blow to the enemy’s rear, to restore the situation on the river. San and help the 8 Army to stay in Przemysl.

Limited tactical success during the offensive at Lubachev was achieved at a high cost - by pulling reserve corps into the battle (the 14 Army in the 3 Army and the 2 Caucasian Army in the 8 Army). The combat strength of the remaining corps was significantly reduced. 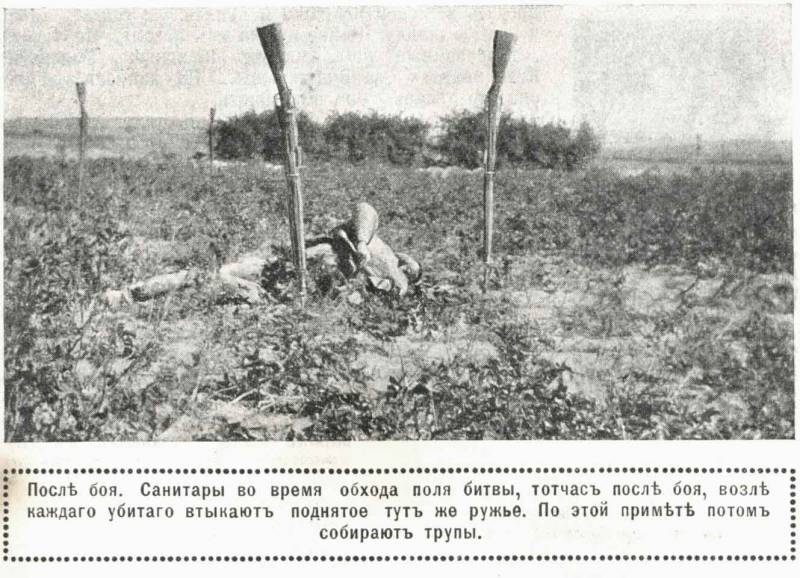 The failure of the offensive operation by Lyubachev and the abandonment of Przemysl had a disintegrating effect on the structure of the South-Western Front. Changing operational and strategic tasks and priorities, a new alignment of forces in Galicia and southeastern Poland led to the fact that the front was divided into 2 groups: one - the 4 and 3 armies - based on Lublin, the other - 8 , 11-I and 9-I Army - based on the Kiev Military District.

The operation near Lyubachev 19 - 22 in May is indicative of fierce oncoming battles, successful for the Russian troops, and the manifestation of the highest valor on the part of soldiers and officers of the Russian imperial army.

From a tactical point of view, the limited maneuverability of the formations of the South-Western Front and the poverty in the sphere of material and technical support of the Russian troops had a great influence on the unsuccessful outcome of the offensive operation. A participant in the operation wrote that Russian counterattacks and offensive operations, deprived of the support of the necessary artillery fire, develop either very slowly or not at all, encountering the enemy’s fire curtain and artificial obstacles not destroyed by artillery fire. The adversary uses this slowness to develop his strike in other directions. And by quickly achieving success in other areas, the enemy creates a new environment, in the presence of which the expediency of continuing the attack undertaken by the Russians either completely disappears or even creates the danger of a deterioration in the general situation. 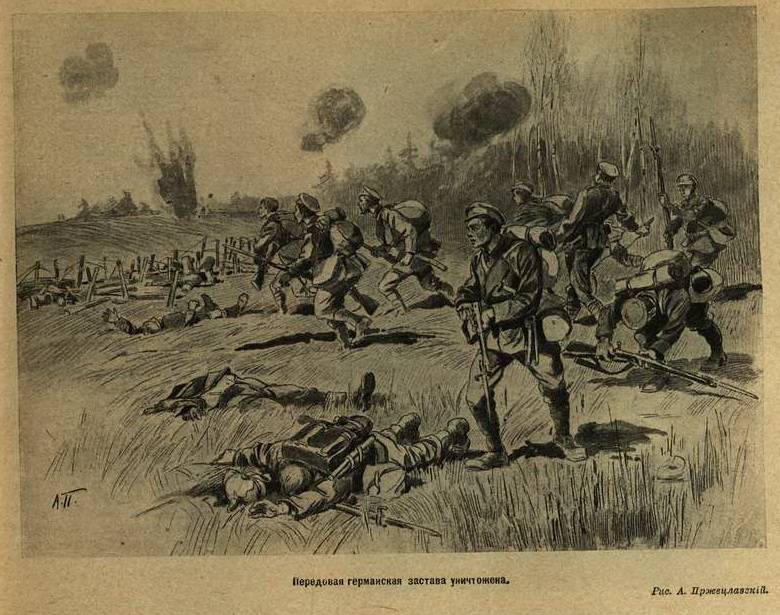 In fact, the offensive at Lyubachev is a battle for Przemysl. The idea itself - by active actions on an adjacent sector of the front to distract the enemy's attention from the assault on the fortress - was absolutely true. The fortress during the First World War could survive only thanks to the success of the field forces. But the same situation was repeated as during the battles at Radymno - the actions of the quantitatively and qualitatively weak Russian 3 Army did not lead to a significant change in the operational-strategic frontier on the South-Western Front. the setting. The effect of the blow, despite the tactical successes of the Russian troops, was minimal, and did not affect the fate of the fortress. The enemy did not begin to transfer additional troops to the offensive zone of the 3 Army, nor did he suspend the assault on Przemysl. As during the battles at Radymno, the enemy ignored the tactical defeat of one of his army (the Austro-Hungarian 4) in order to achieve a strategic goal. As a result, a small area of ​​the left bank of the river was captured. San, but due to an even greater weakening of the troops of the Southwestern Front - primarily the 3 Army. The enemy, covering herself from this army by Austrian troops, dealt the main blow to the Russian 8 Army, using its best formations for this operation - the corps of the German 11 Army. And by May 22, Russian troops left Przemysl. Having solved the strategic task, the enemy began to supplant the remaining armies of the South-Western Front - successively delivering attacks on the 3, 11, and then the 9 armies. 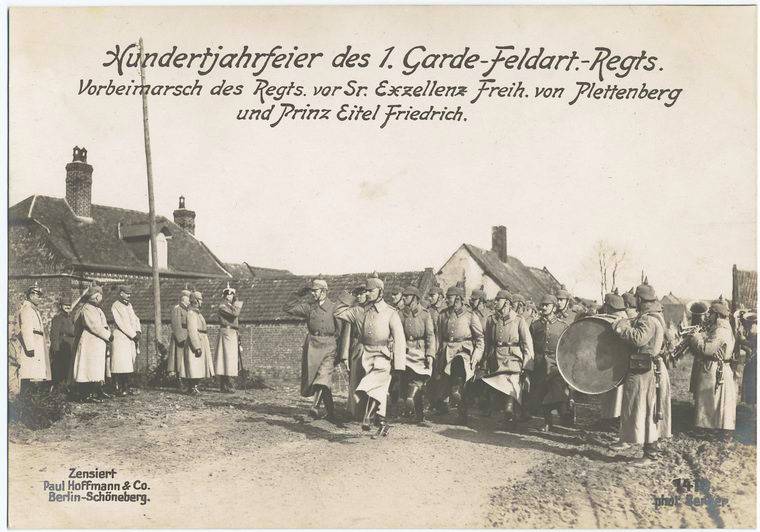 In the ranks of the enemy are the 1th Guards Field Artillery Regiment, the Guards Corps of the German 11th Army. 1915 Propulsion The Parade of the Guards Corps, infantry general K.F. von Plettenberg and the chief of the 1th Guards Infantry Division, Major General Prince Eithel Friedrich of Prussia, take the parade. New York Public Library

From May 23 to May 29, the adversary remained passive and improved his position.