Armory of the Doge's Palace. Armor and weapons

October 9 2019
80
Like a giant lily, you conceived
From the blue sea, whose abyss has protected

Your houses, palaces, your temple, your sails,
And solar power, and a knightly outfit.
Henry Longfellow. Venice. Translation by V.V. Levik

Military museums of Europe. In the hall №2 Armory the chambers of the Doge’s Palace have a very interesting trophy: a triangular standard captured in the famous battle of Lepanto in 1571. Along the perimeter, verses from the Koran are embroidered on it, and the inscription in the center proclaims the glory of Allah and his prophet Muhammad. Here you can see the genuine armor of the French king Henry IV, which were donated to the Republic of Venice in 1603. On the chest of their cuirasses there is a mark from the bullet, that is, it is obvious that after manufacture they were subjected to a kind of strength test. It is interesting that the weight of most of them does not exceed 23 kg, that is, they are not so heavy to wear. There is also a very rare medieval armor on display - the brigandine, which represented a carapace of plates sewn from the inside onto fabric. And why this is such a rarity, it is clear: metal can withstand a lot, but the fabric, alas, does not have its strength. There is also the armor of the Admiral of Venice fleet Francesco Duodo, who heroically fought at Lepanto, which adorn both the lions of St. Mark and arabesques in a purely oriental taste. In the same room are exhibited chanphrons of the XNUMXth century - guards for protecting the heads of horses; several two-handed swords and two richly decorated halberds. 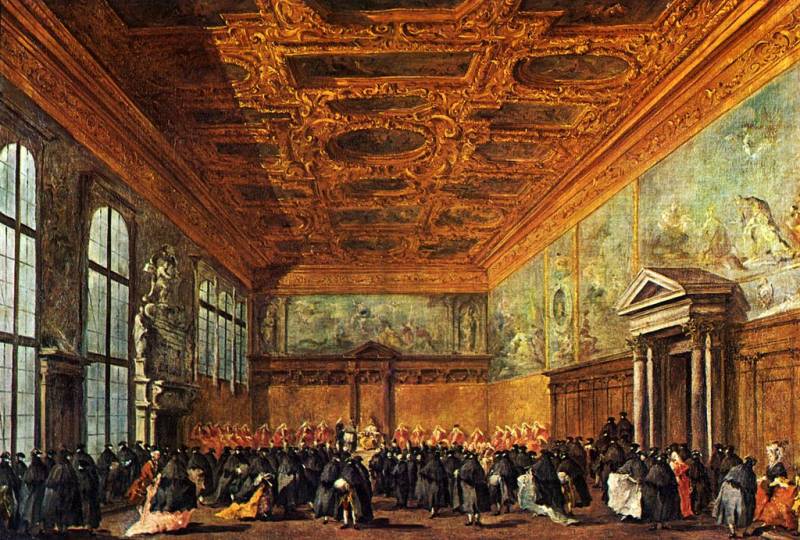 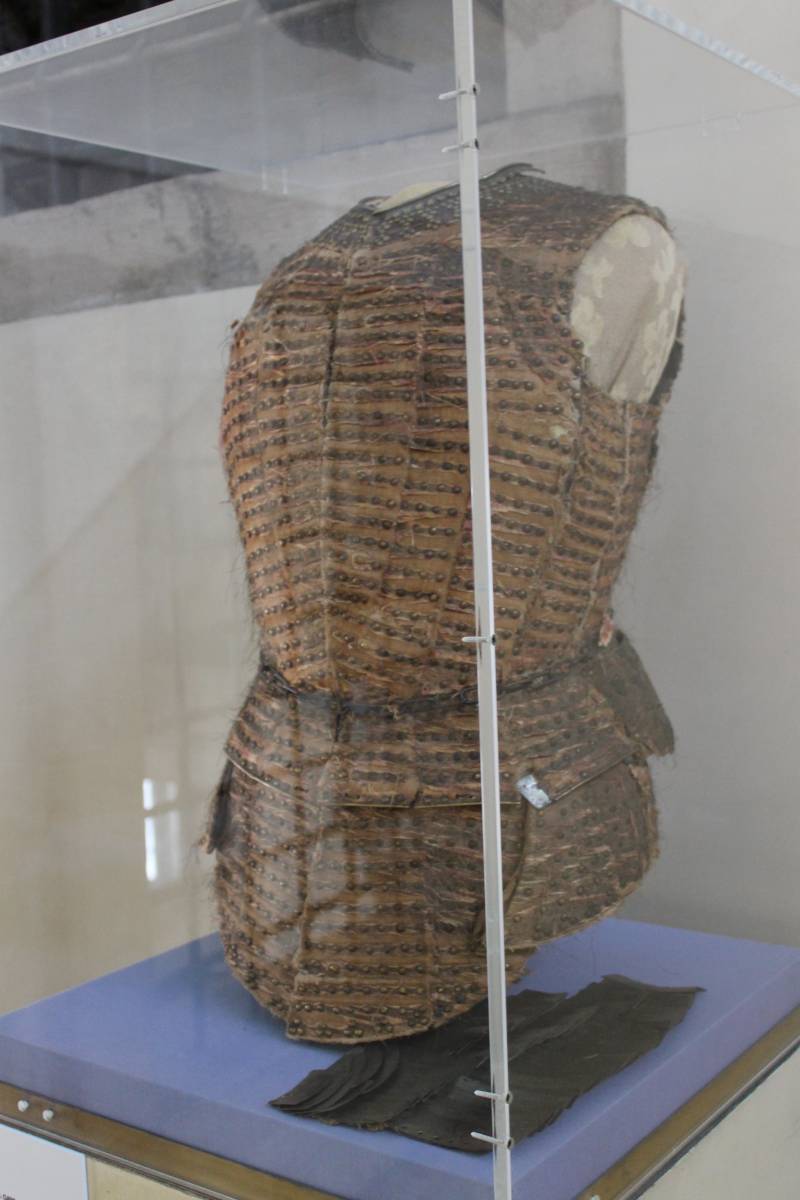 Here she is, this brigandine!

Hall No. 3, or “Morosini Hall”, got its name from the bust of Francesco Morosini in a niche at the end of the room. As a Venetian admiral, he became the supreme commander of the Venetian fleet during the war with the Turks in the 1684-1688 years, re-conquered the Peloponnese received the title of Peloponneseako ("conqueror of the Peloponnese"), and was elected a doge in 1688 year. Moreover, Morozini's military victories were such that he was the only person in all history The Republic of Venice, which was awarded a monument from the state, put to him during his lifetime. In this room you can see an amazing number of swords in the characteristic Venetian style, halberds, crossbows and their quivers, marked with the letters CX, which are also visible on the doorposts, which indicate only their belonging ... to the Council of Ten - the highest organ of the Republic of Venice. X. Another noteworthy exhibit is a small, exquisitely decorated cannon-gun, dating from the mid-16th century. 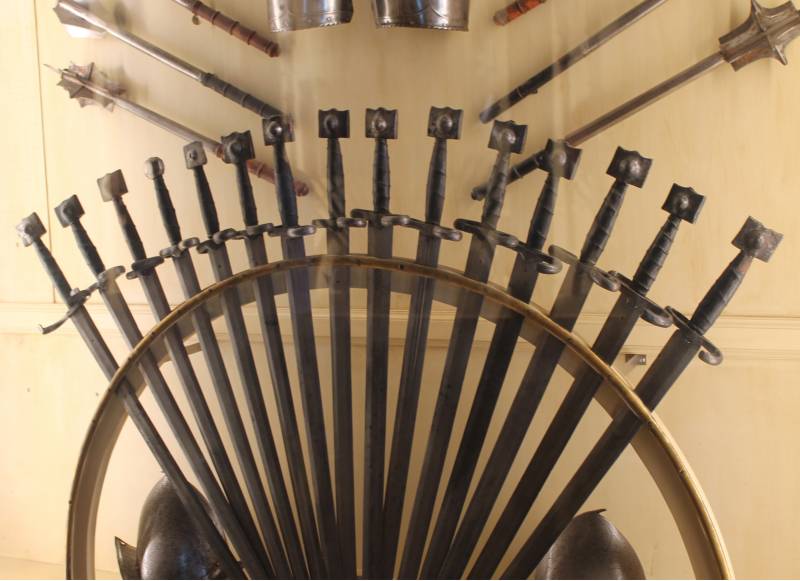 The swords of Venice in 1480-1490 and sixth-century shoppers. Venice and Hungary. They had a horizontal crosshair, curved in the shape of the letter "S". Doge Guard traditional weapon 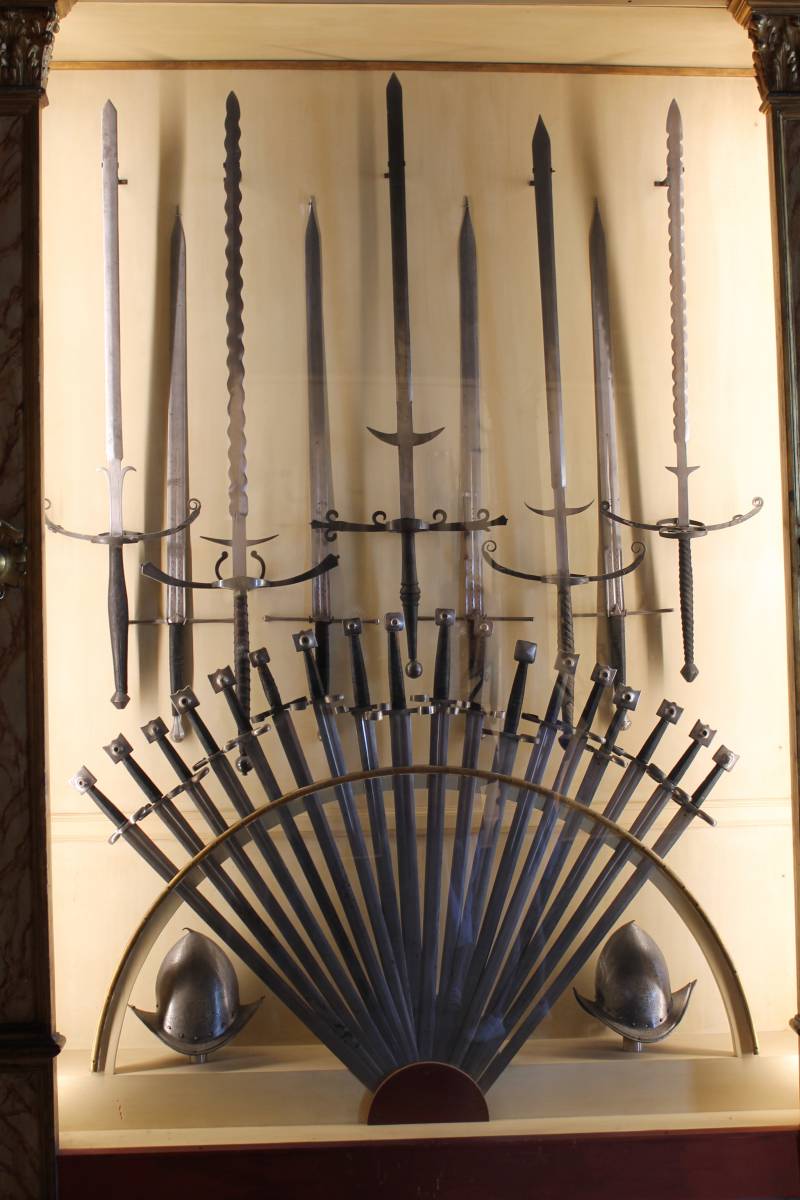 Below - the Venetian swords of Skiavona 1480-1490 gg .; above two-handed swords are the spadons of mercenary Landsknechts 1560 – 1580; Morion-Cabasset type helmets, second half of the 16th century, Brescia 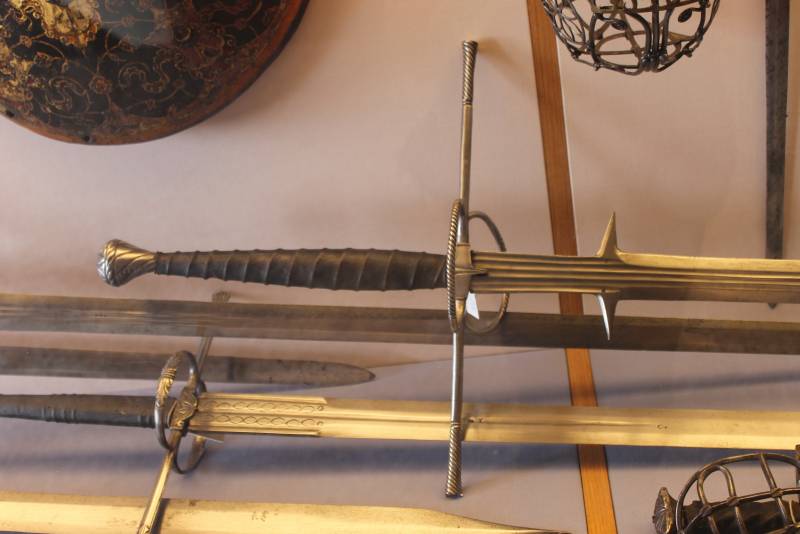 Handle to match the sword!

Hall No.4. In this room, various samples of firearms of the XVI and XVII centuries are stored. The collection also includes some instruments of torture, as well as a chastity belt and some instruments of torture, but the main thing is, of course, all kinds of muskets and pistols. The collection of pistols and arquebuses - the ancestors of modern rifles - owned by the Doge's Palace, contains rare and valuable specimens, mainly made by German gunsmiths or who worked in the republic in Brescia. Some are completely metal, others have wooden handles and are very richly decorated with gilding and ivory and mother of pearl inserts. There are also models made in the East, such as, for example, seven Persian arquebuses, which, no doubt, were donated to Doge Marino Grimani (1595-1605) by ambassadors from this distant country. 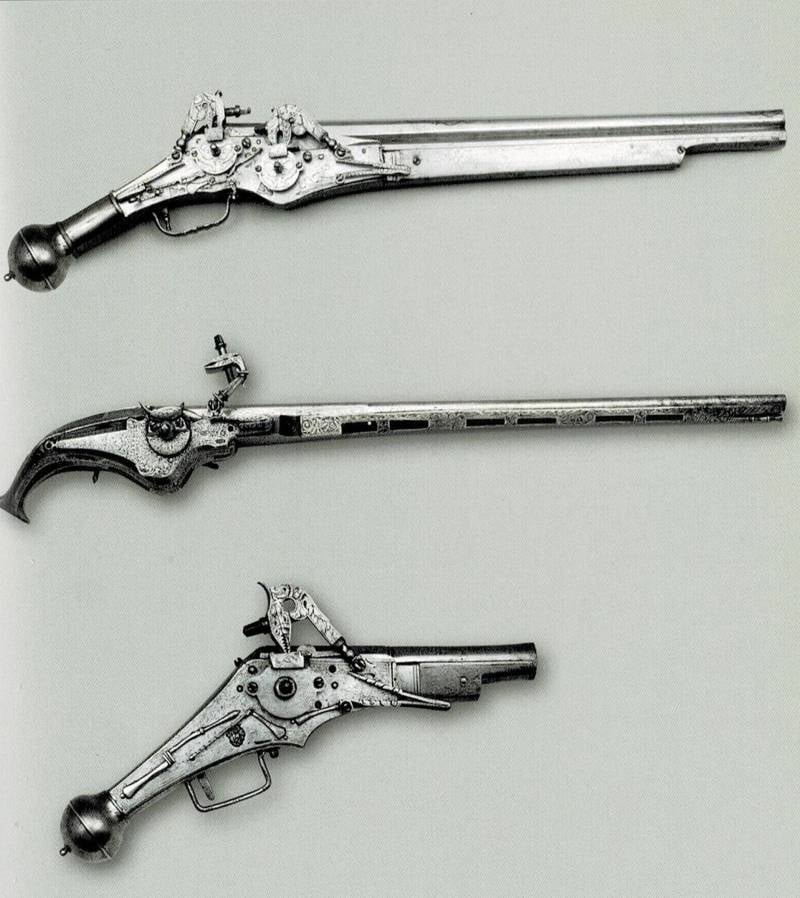 In this photo we see a German Reitars pistol with two locks (at the top), but one barrel, charged sequentially 1560 d. By the way, the ball on its handle is not at all designed to hit the enemy on the head like a club. Inside, it is empty and this container was intended for storing spare pyrite, a pistol with an Eastern-use wheel lock and a German pistol, which was used primarily by travelers

There are many crossbows in the collection and this is one of them, but very unusual: a small steel crossbow with a length of only 27 centimeters, found in 1664 from a certain Giovanni Maria Zerbinelli, who was hanged after they found this weapon from him. It was strictly forbidden to store such portable weapons in Venice at that time! Next to them are torture instruments: a collar with spikes and a "key" for the fingers. Their owner Francesco Novello da Carrare, ruler of Padua, was strangled in the cellars of the Doge's Palace in 1405 with his sons, accused of possessing these and other “cruel objects” and using them to torture his captives. 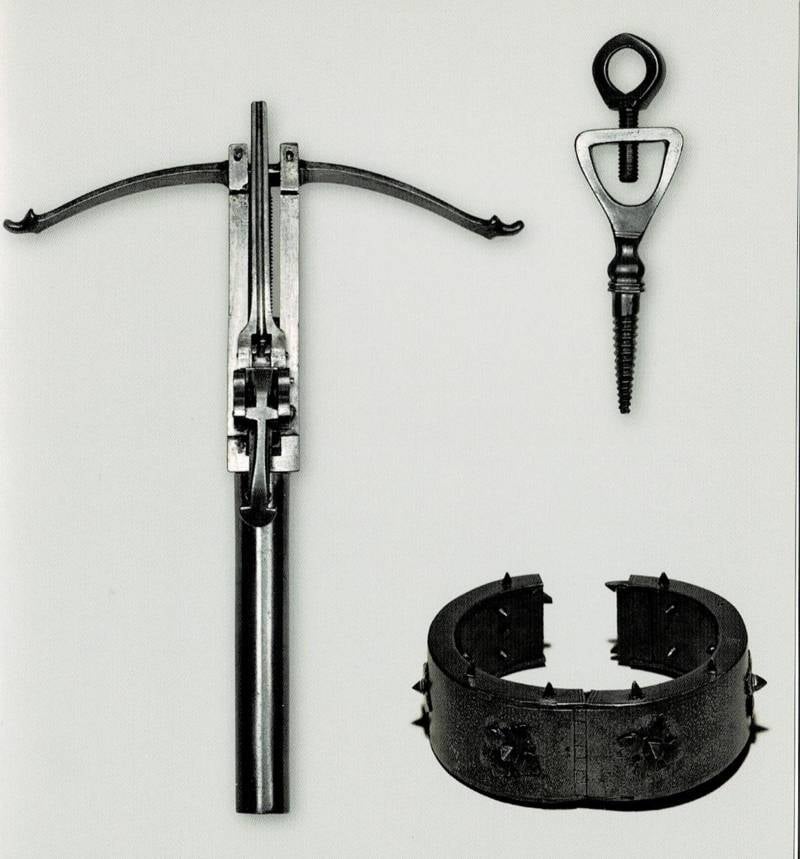 Crossbow by Giovanni Zerbinelli and the Torture Instruments Francesco Novello

Among the most amazing exhibits, which could have been given a separate article, are samples of hybrid weapons, and there are more than 180 copies here! These are shooting clubs and hybrids of a pistol and ax, crossbows and arquebus hybrids, a mace gun and a sixth gun, a slaver pistol, an ax ax and even ... a horn pistol!

Present on display and an impressive collection of helmets. Here and “a grand bacinet, with a mantle that a simple bacinet did not have, and salads of various kinds, and barbut helmets. 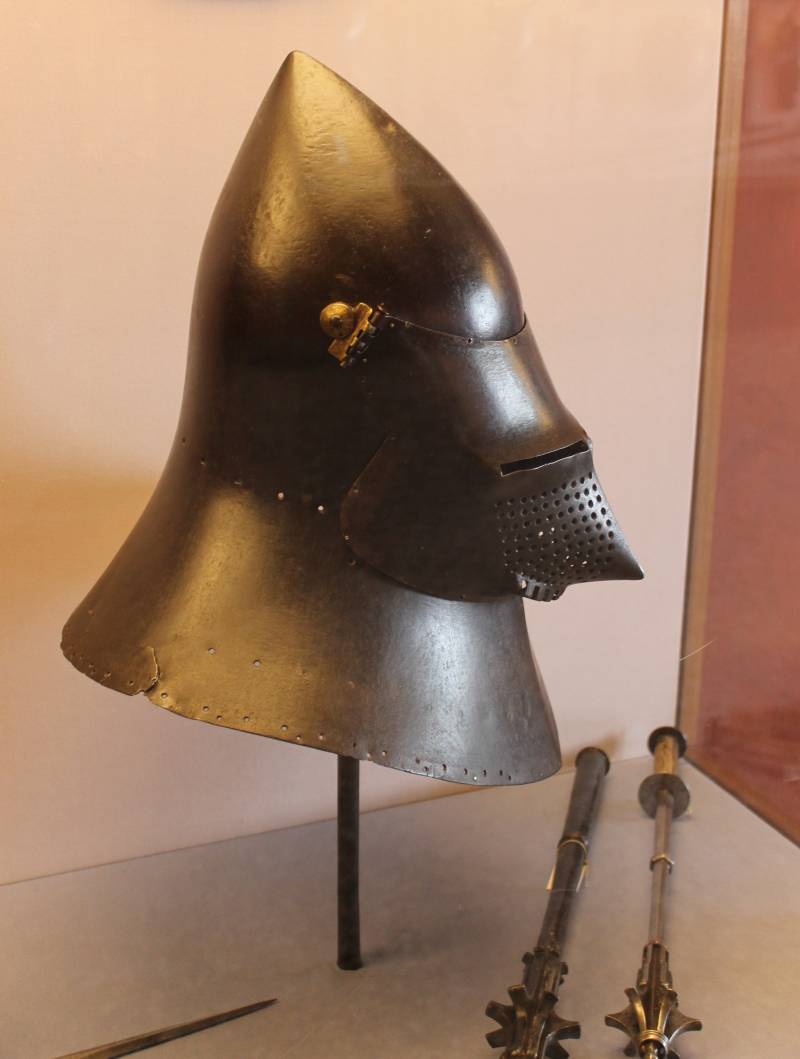 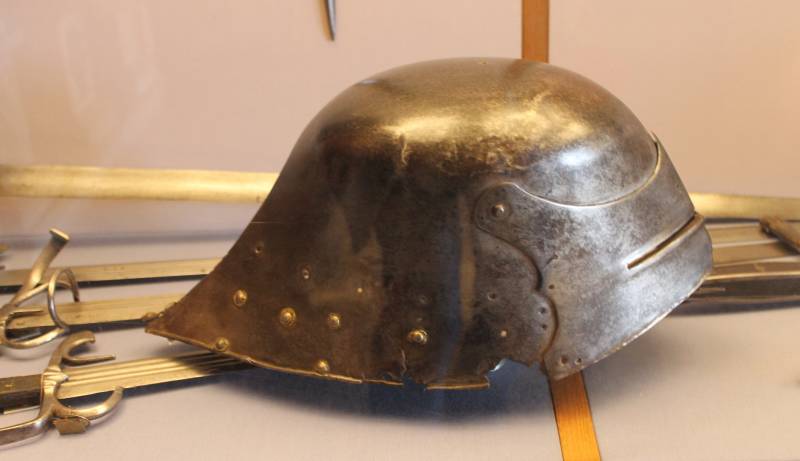 Salad of the 15th century 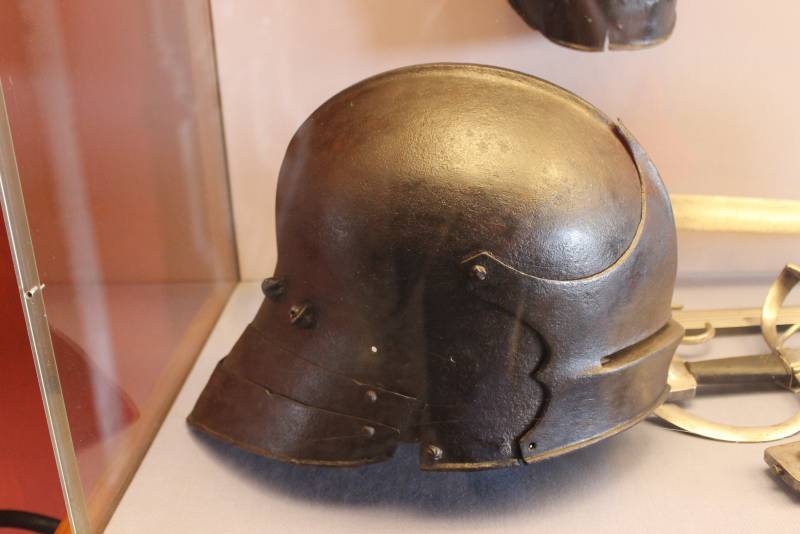 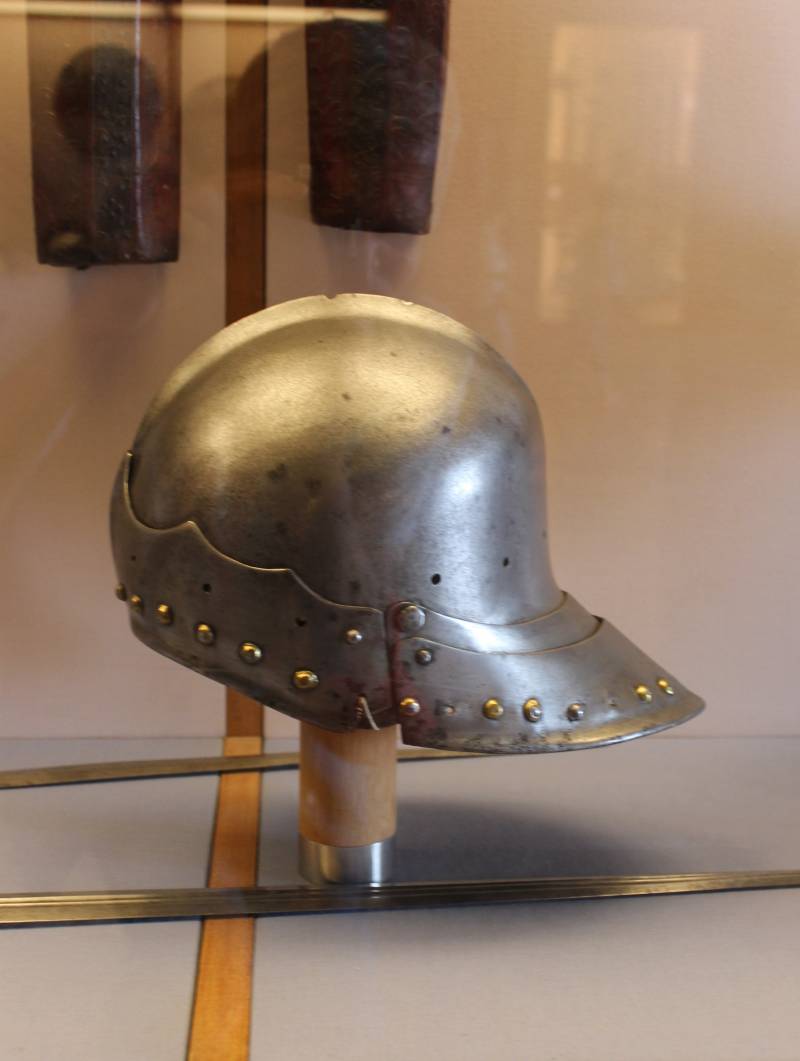 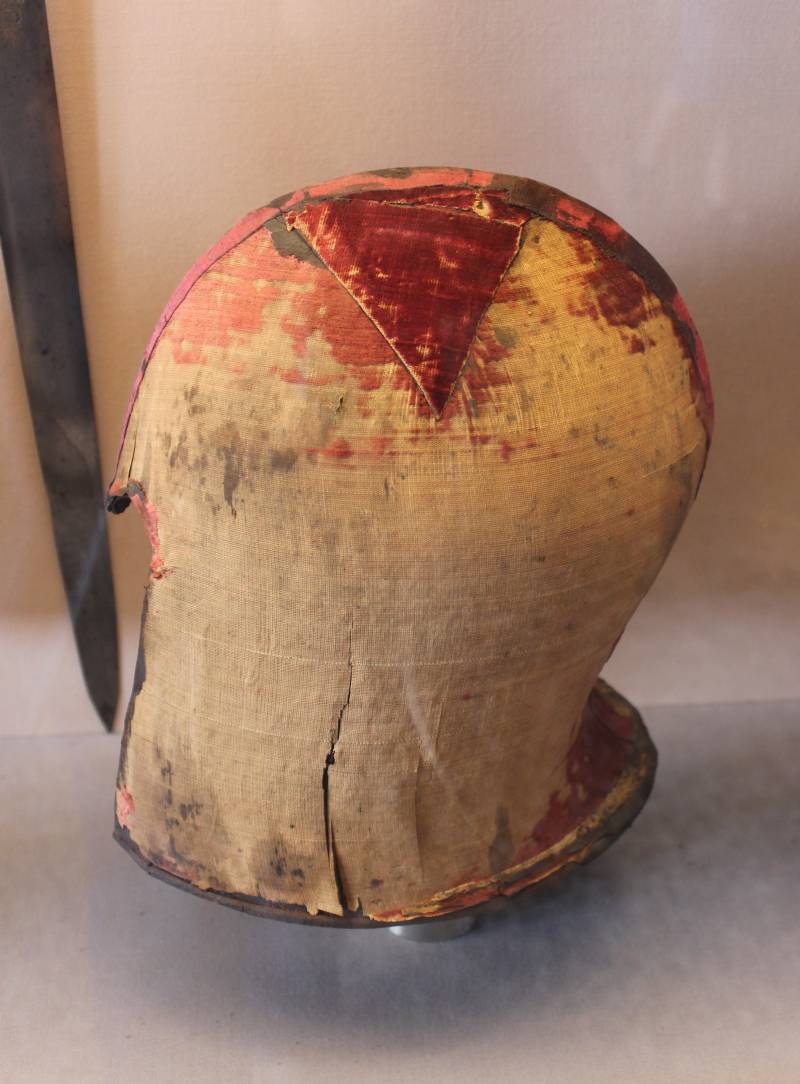 Barbut helmet was considered an Italian invention and in the same Germany was called "Italian Salad." Moreover, it is very often covered with fabric. Here's how this one, for example, a typical Italian barbut in shape, approx. 1470 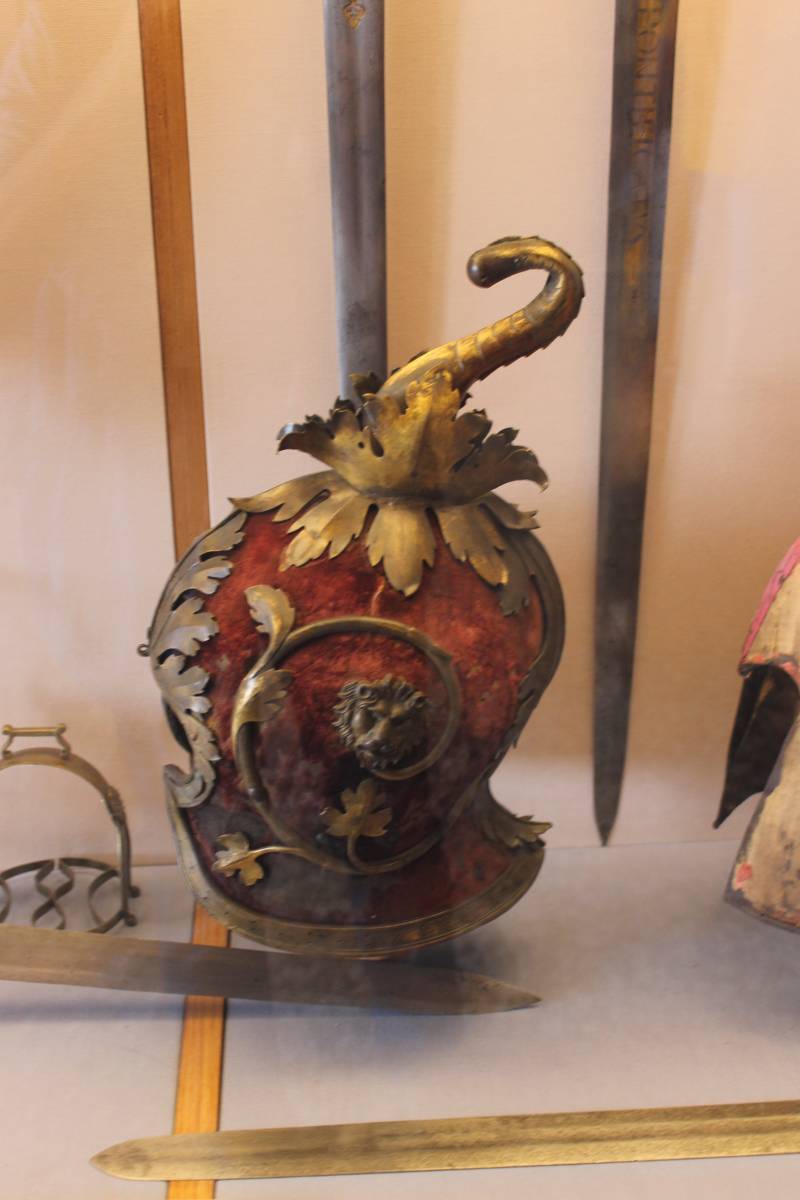 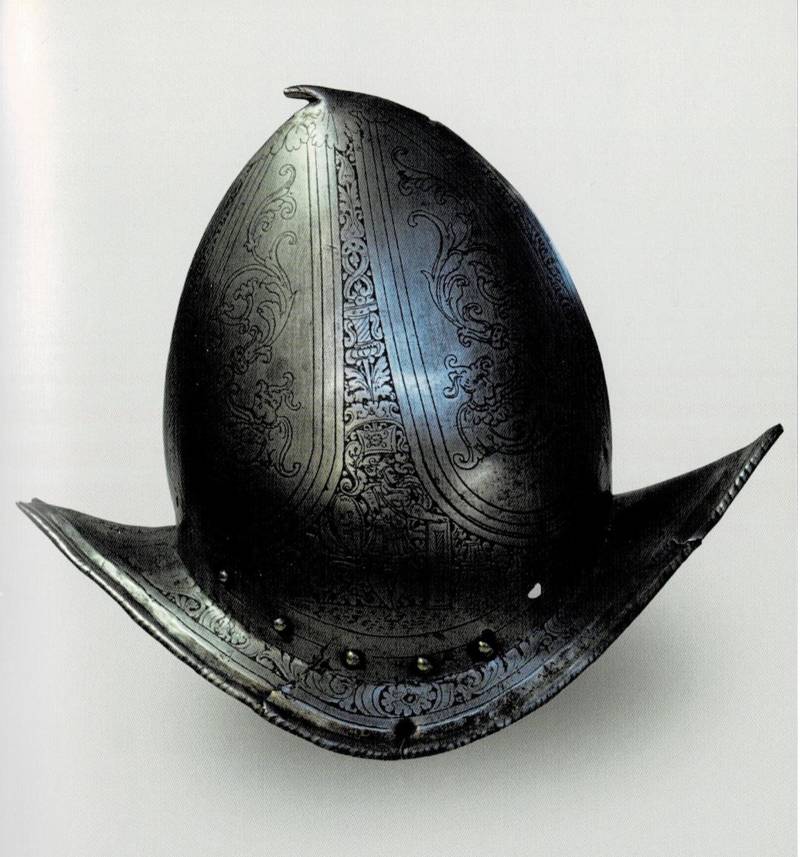 But this is a hybrid of Morion and Cabasset - Morion Cabasset, also called the “Spanish Morion”. As for the name, the word "morion" comes from the Spanish word "morra" - "crown", and there are a lot of such helmets in the collection of the Armory as well, and it is not surprising, because the Swiss Pope’s guard still wears them. But the cabasset in its shape was like a bottle pumpkin, calabash, and it was from it that it got its name! And Morion, and the cassette, and their hybrid, were very convenient primarily for arquebuzirs, since the fields bent up did not prevent them from shooting at the walls of the fortresses

The exhibition has many halberds (introduced to Italy by Swiss mercenaries at the beginning of the 15th century and, curiously, still used by the Swiss Vatican Guard, it certainly makes it perhaps the most famous medieval weapon that has survived to this day!). In addition to halberds, there are glaives, corsets, protazins, in a word, pole arms for every taste. That's just to photograph it, and even through the glass, well, it’s just very inconvenient. 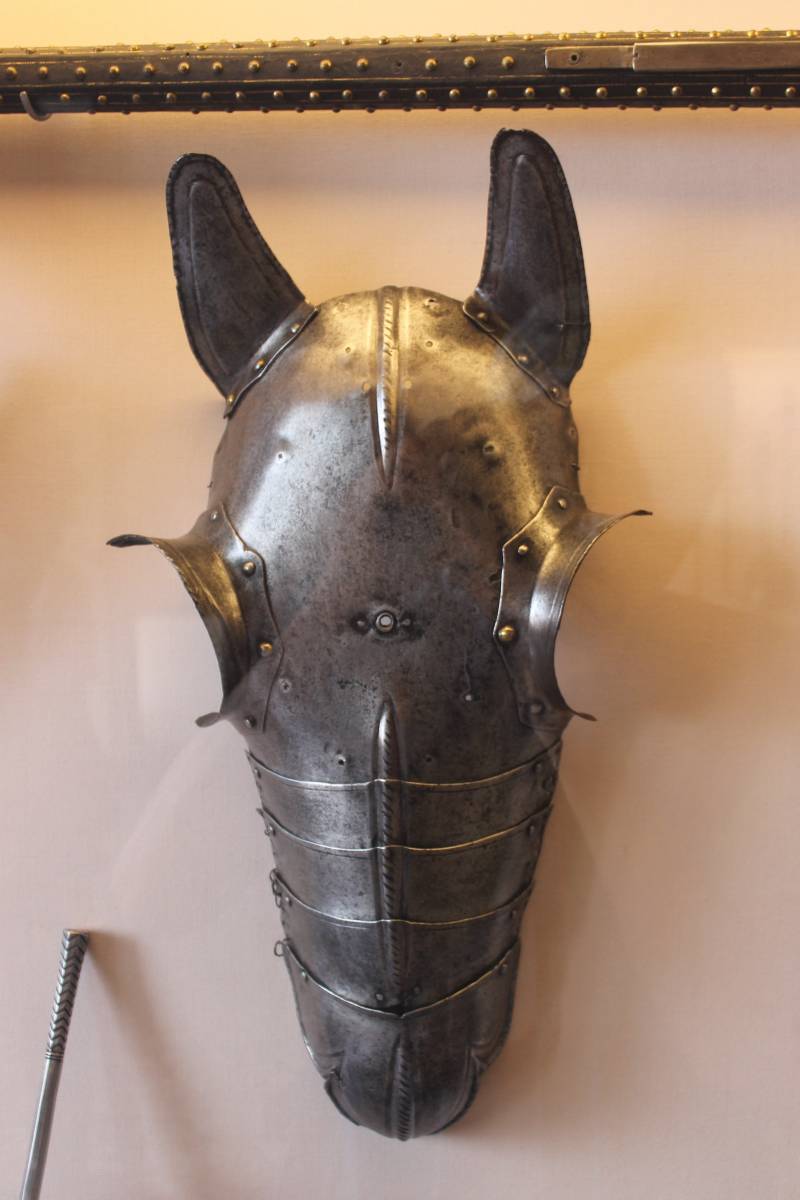 In addition to helmets for people, there are also chanphrons in the exposition - headgear for horses! 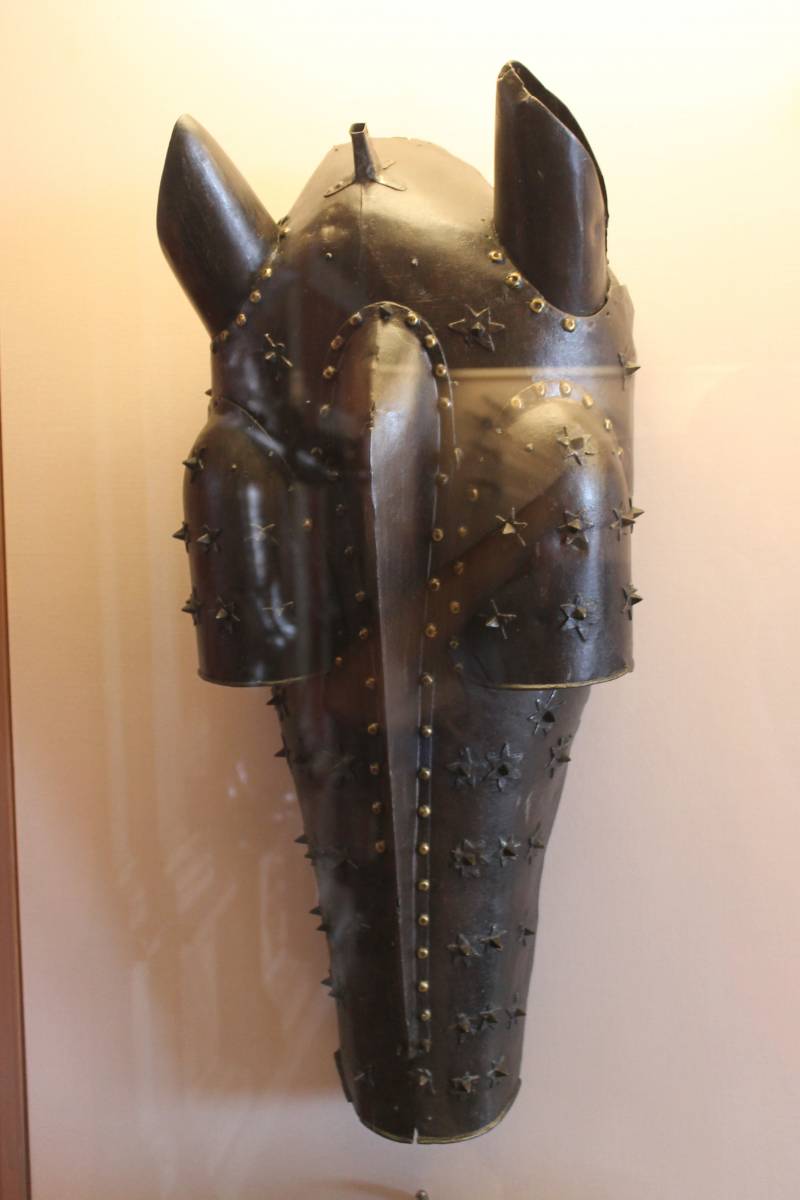 You don’t even know how prettier! 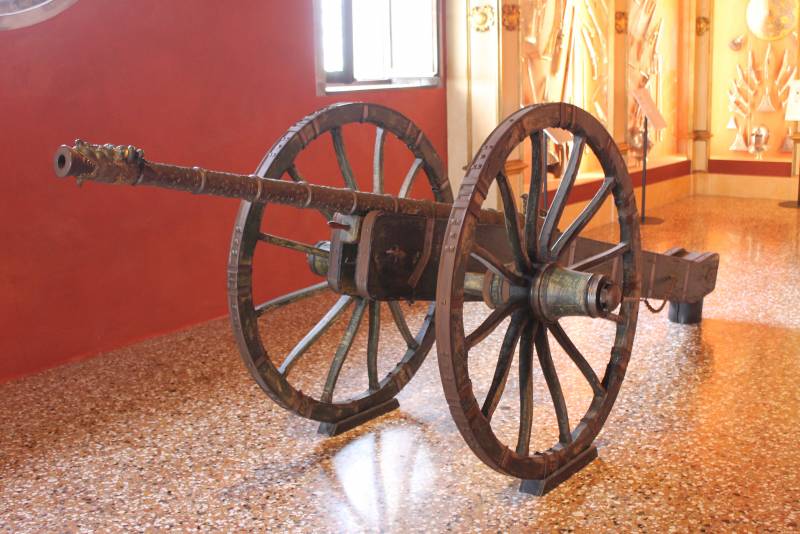 There is also a very beautiful, albeit small-caliber cannon-gun, presented to him in 1576 by the heirs of one of the Doges. It looks like an example of high foundry art, and not a device for killing - that’s what you can say about it 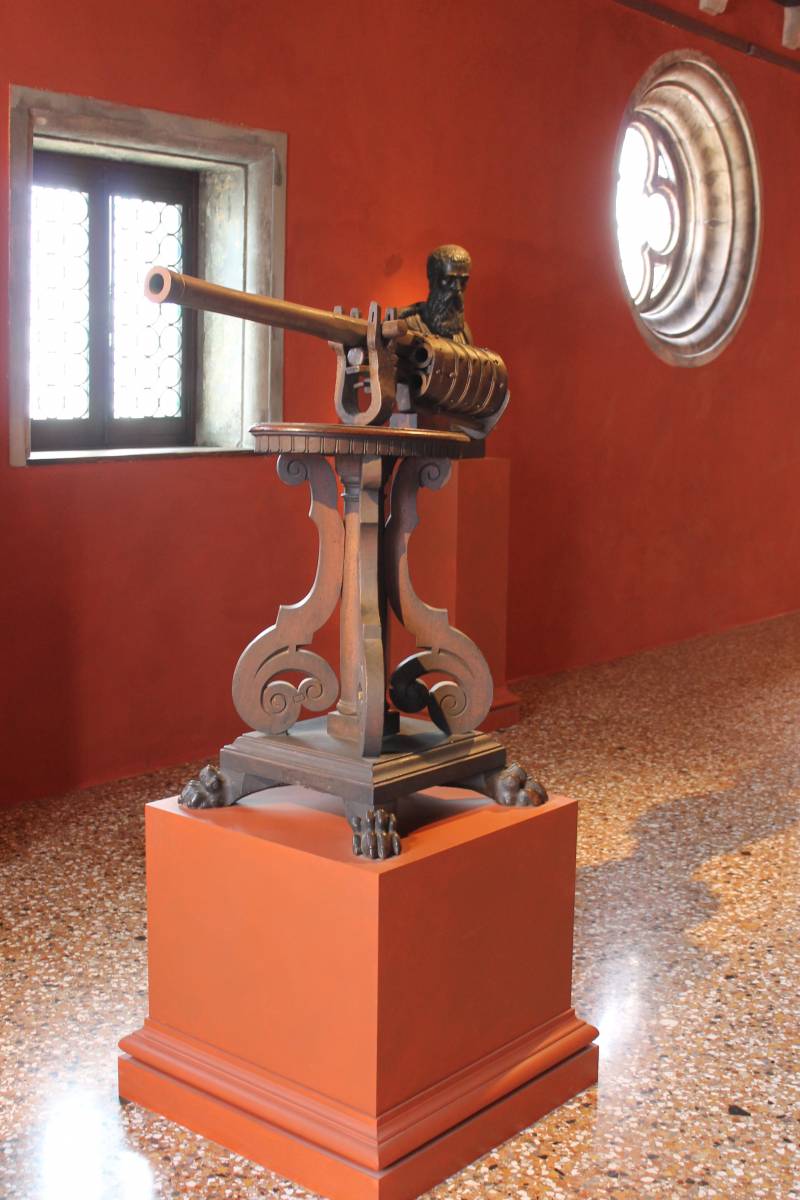 There are also completely original examples of firearms: a five-shot ship’s revolving cannon made by master Giovanni Bittista Comin in 1621. That's just she recharged for too long! 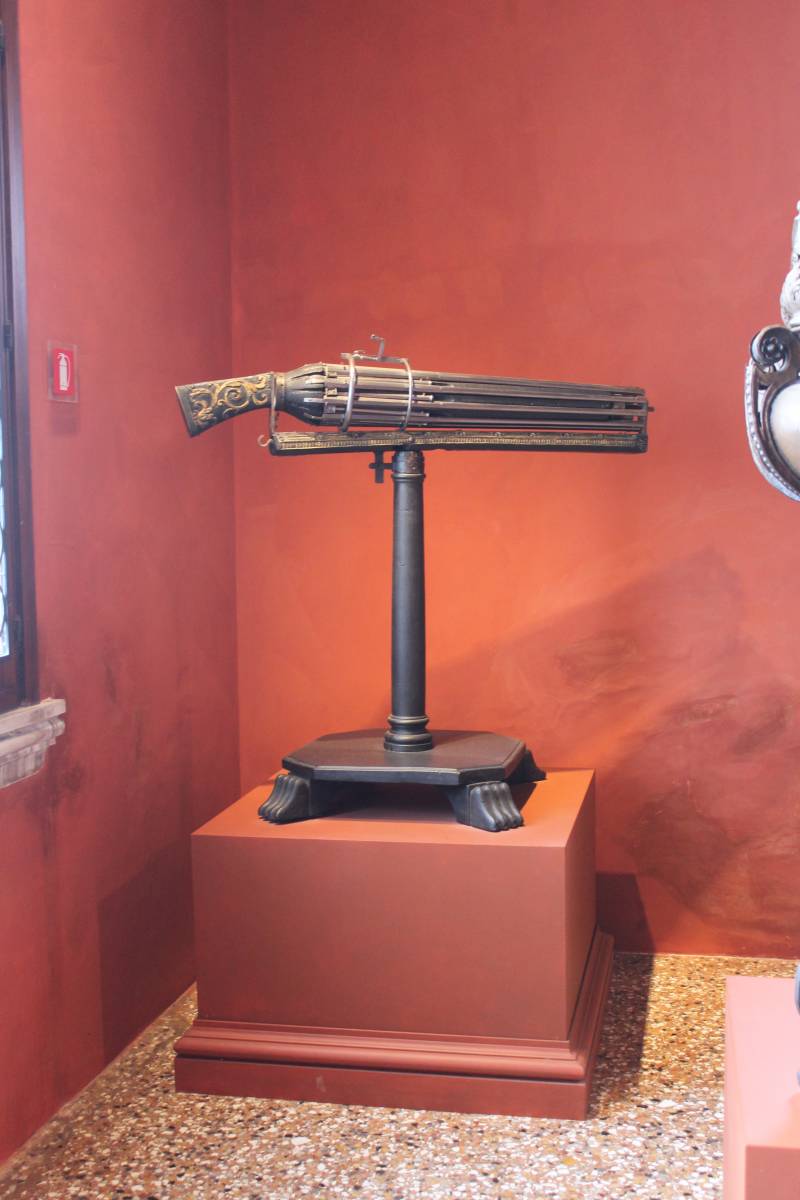 Another prototype of a machine gun: a twenty-barrel cannon with a rotary block of trunks of master Giovanni Maria Bergamin, who got here in the weapons room of the palace in the 1622 year. She had a mechanism of vertical and horizontal aiming and, as it is believed, could shoot at a speed of 500 rounds per minute! 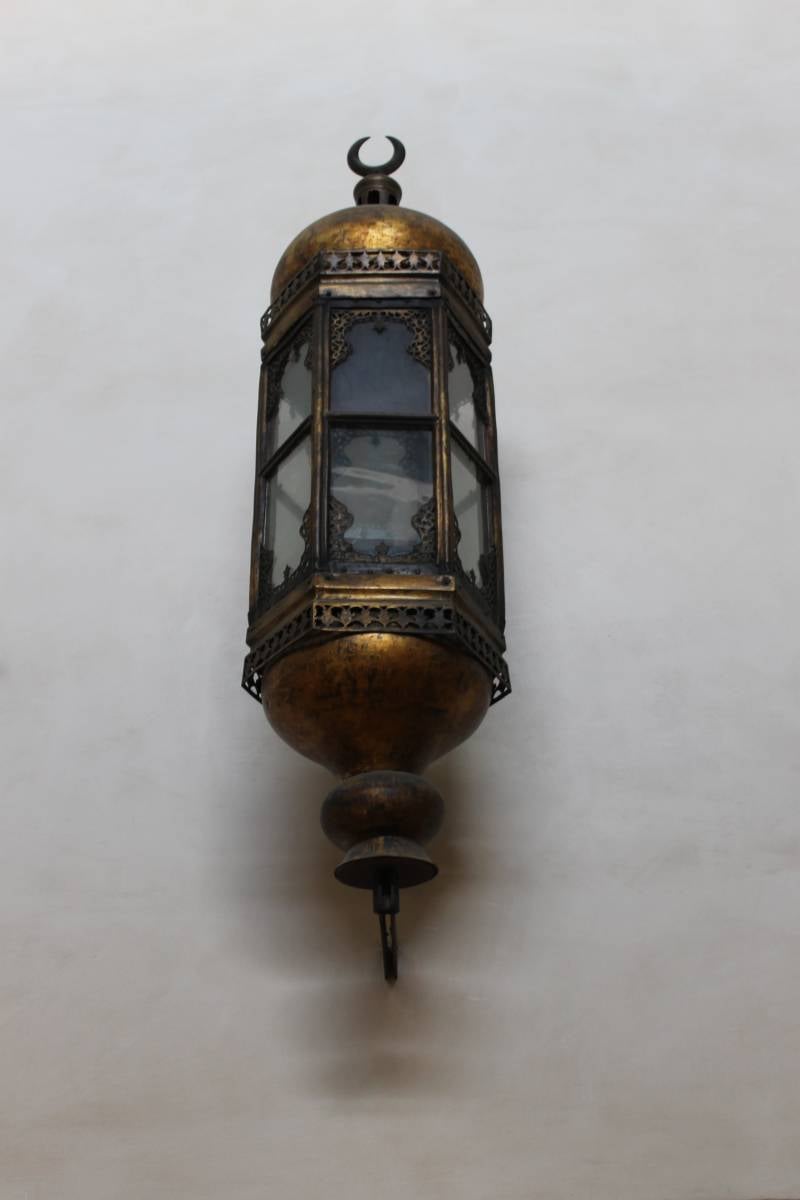 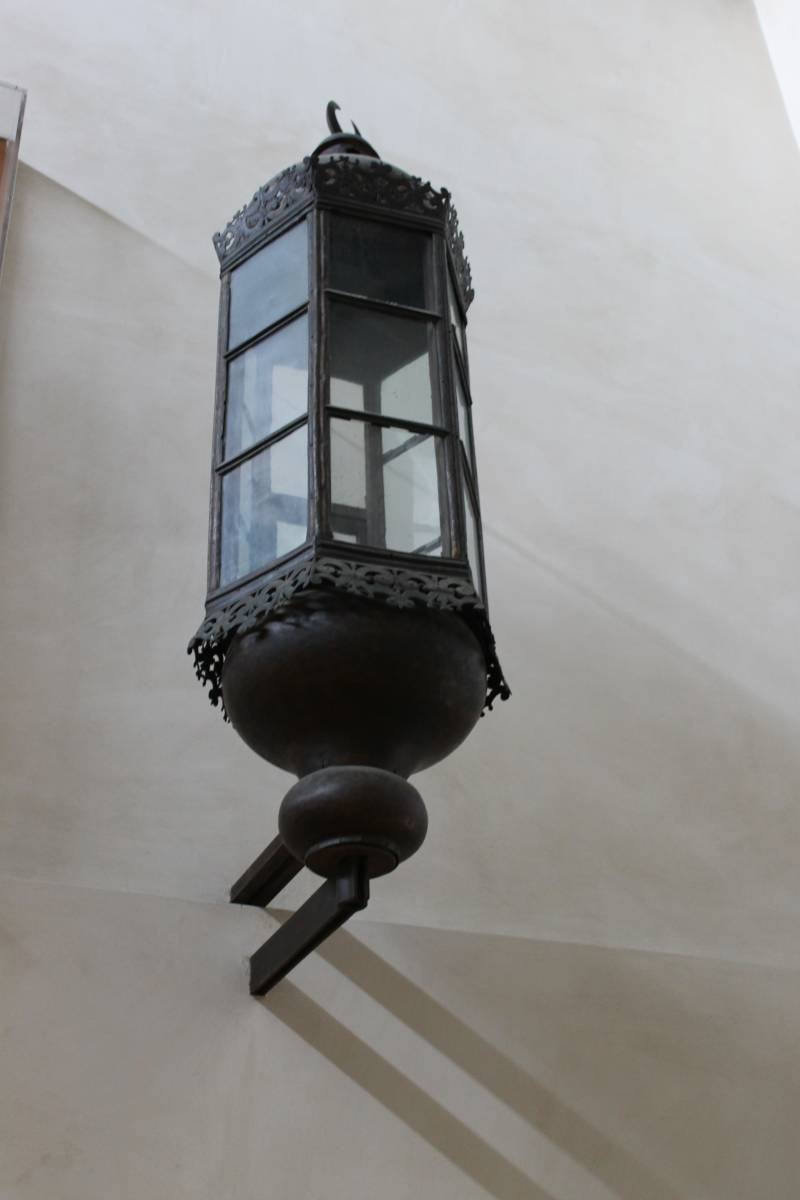 Overwhelmed by the impressions of what we saw, we leave the halls of the Armory, again follow the signs on the walls and get ... inside the famous "Bridge of Sighs", leading from the Doge's Palace to the neighboring building, where the prison was located. There was a prison in the palace itself, and at the very top, under a lead roof, where the prisoners froze in the winter and literally roasted in the summer from the incredible heat. 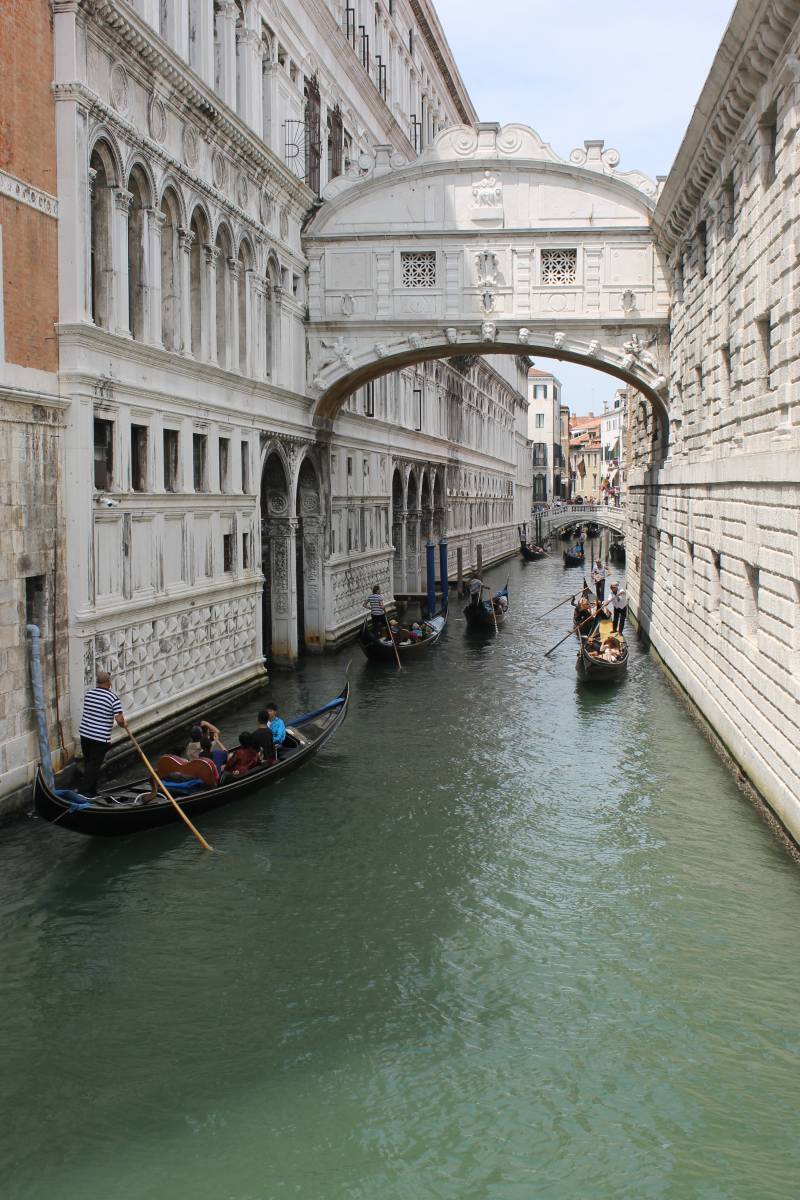 This is how this bridge looks from the outside. I had never thought that I could happen to be inside him 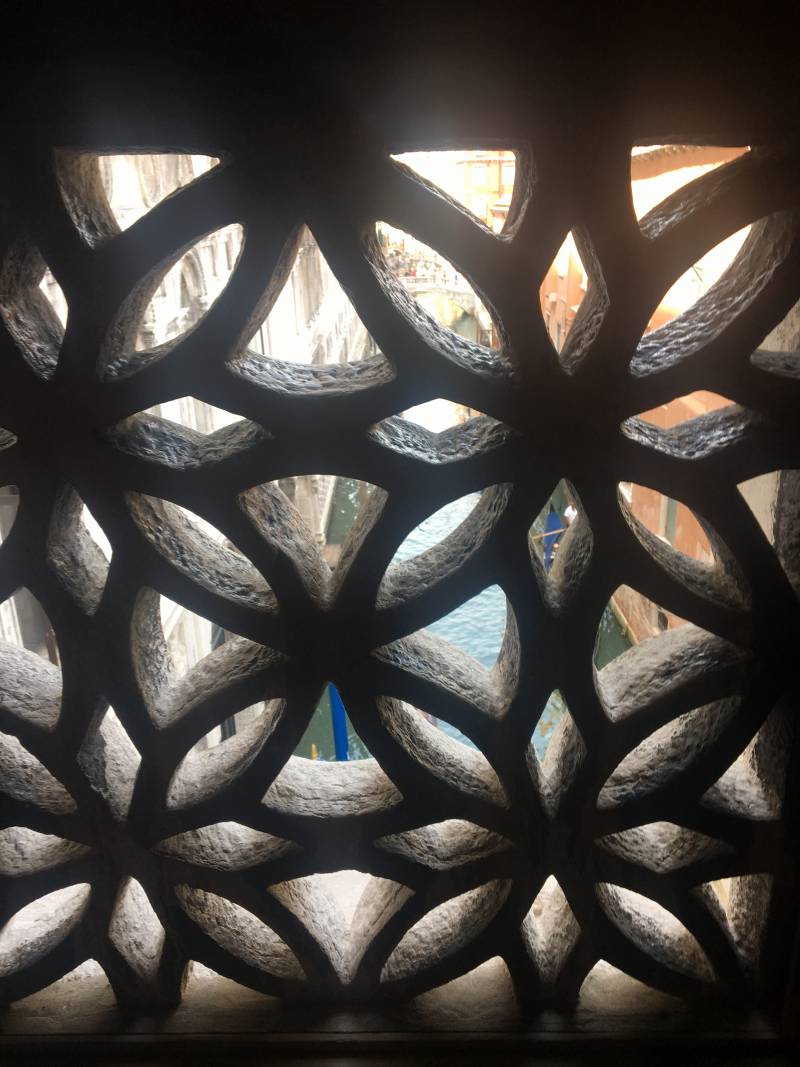 Lattice in its window from the inside 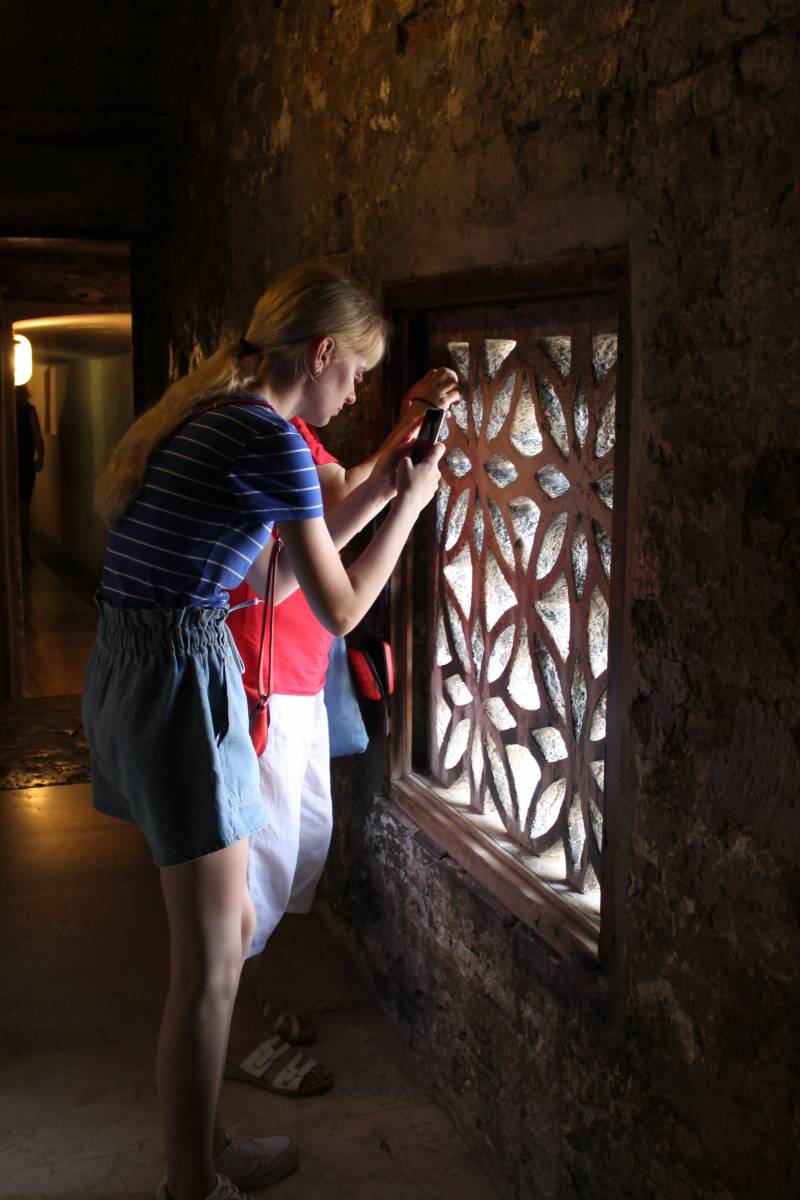 Tourists here, of course, have something to photograph, but actually being inside this "humpbacked bridge" is a little creepy. And some start to get lost in the narrow underground passages and then, meeting you, they ask in frightened voices: “How do you get out of here?” The best answer: “No way!” And a sardonic laugh in addition! 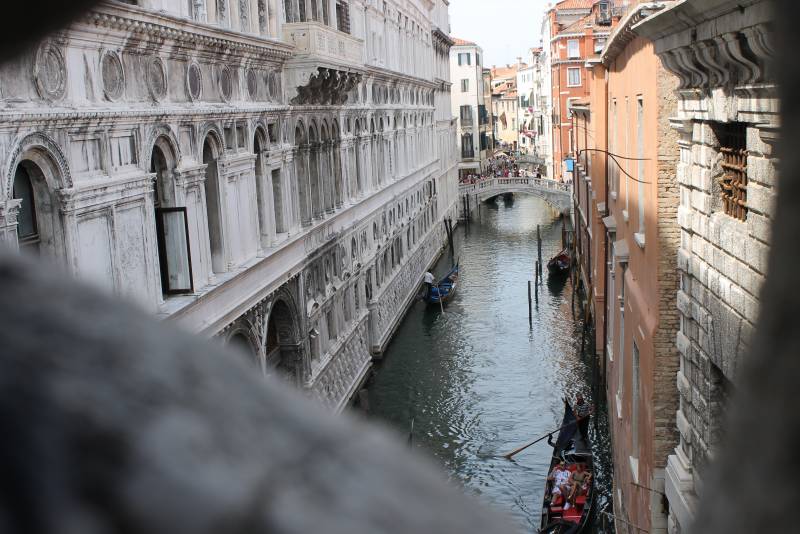 That's all the unfortunate prisoner could see, setting off across this bridge into prison, casting a last look through the slots of the grill. And it’s sad to sigh ... This is where the name of the bridge came from, that the people who walked along it always sighed very bitterly 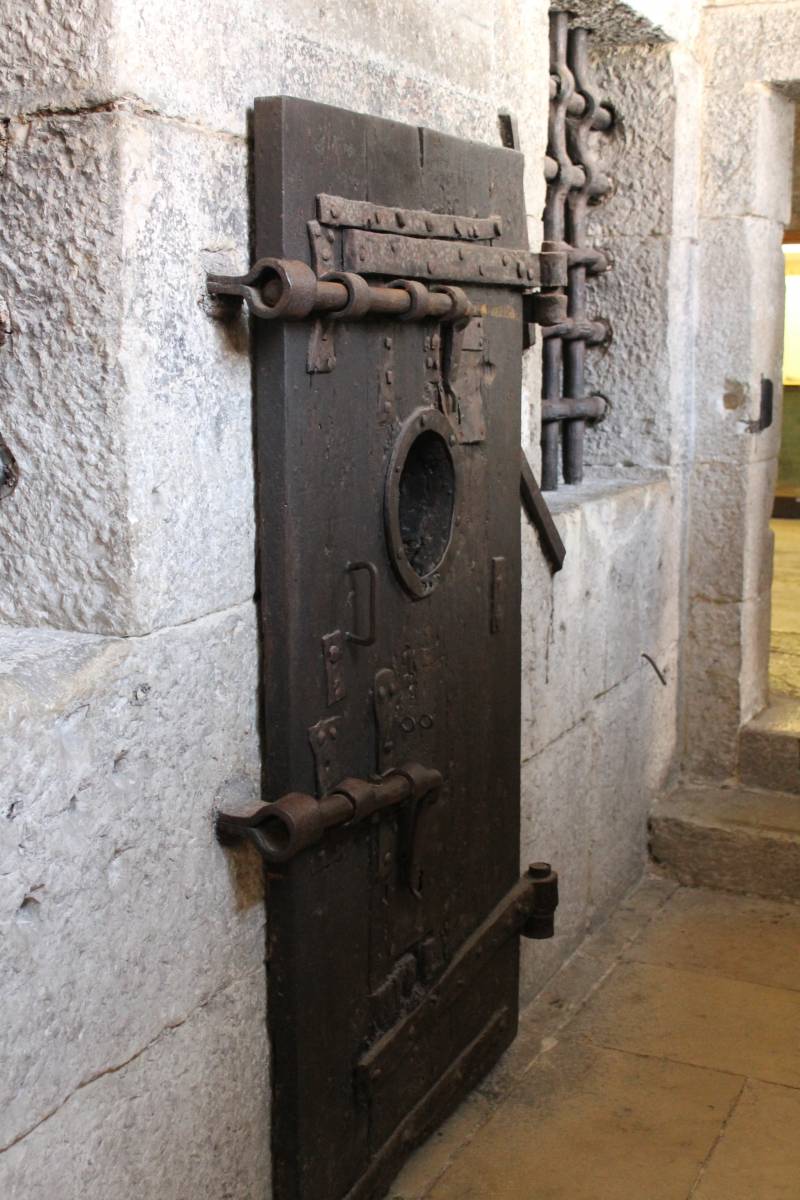 Then this door slammed behind them ... 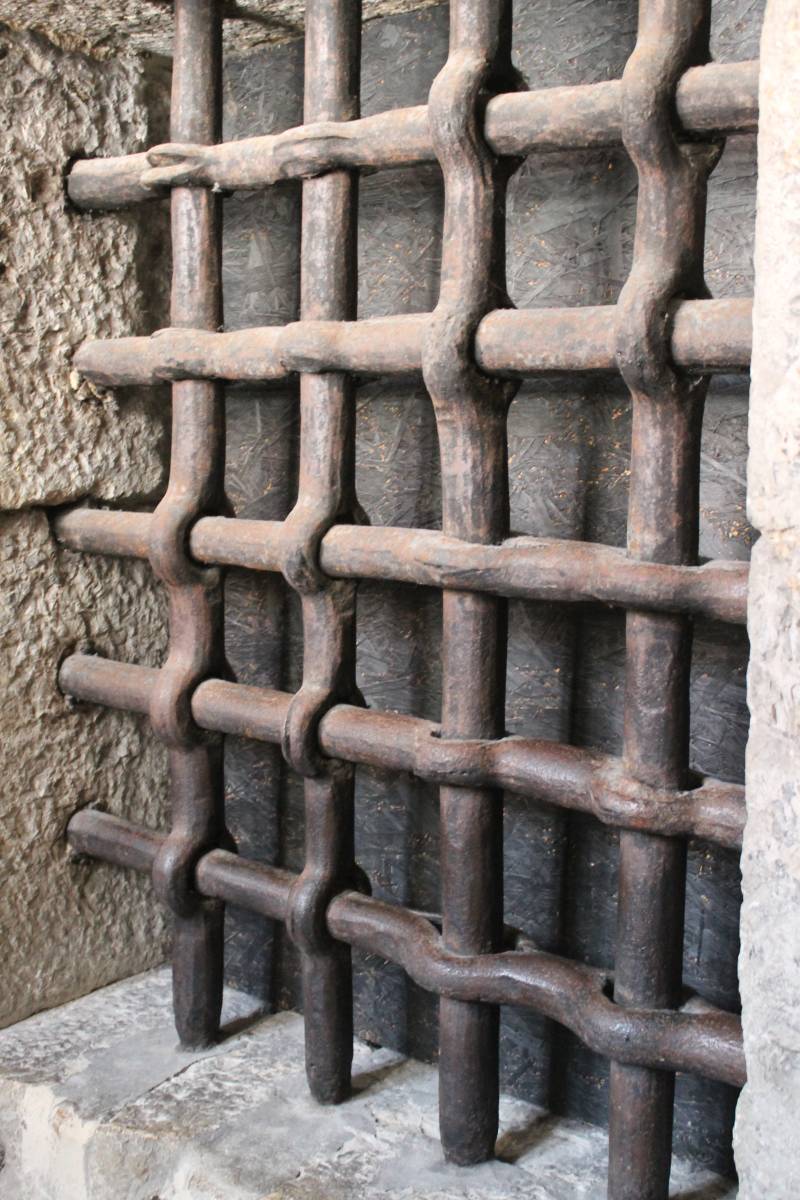 The “window to the world" for them was the window behind this truly monstrous iron grate! 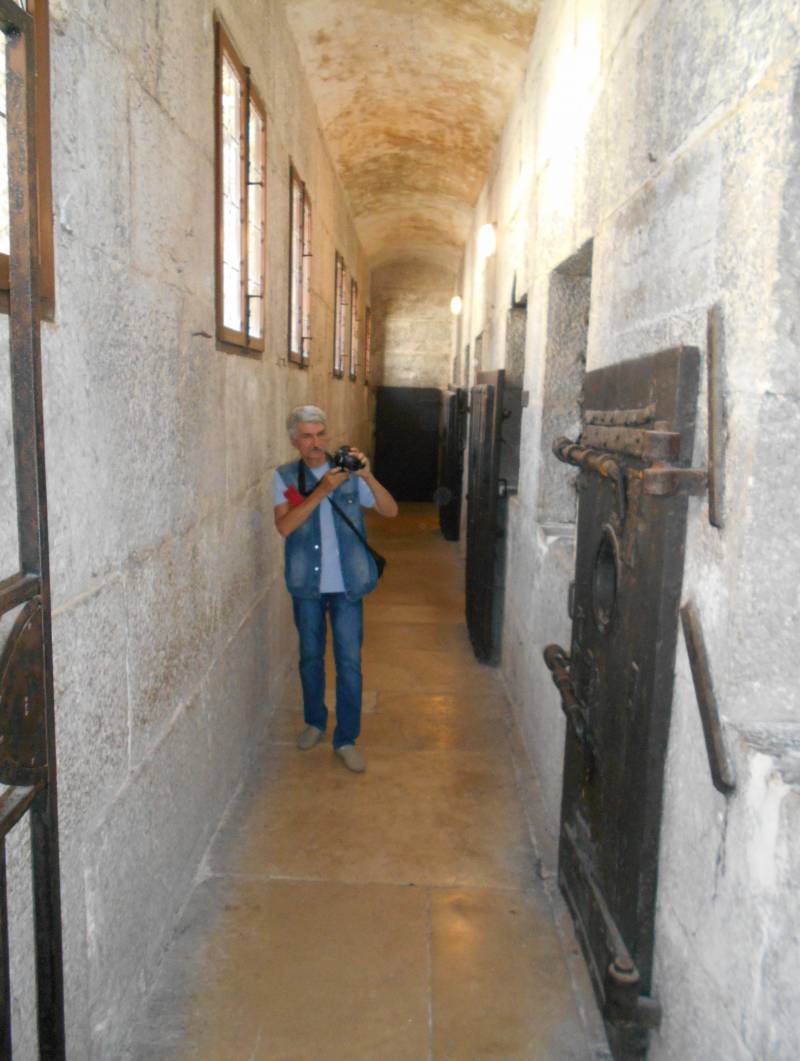 In the prison corridor. Author at work

This usually ends with a visit to the Doge's Palace. Although, you should not rush out of it, but have a bite to eat with real Venetian pizza right there, in the dungeon, in the cafe, watching how gondolas float past you right behind its glass door. Romance, however! 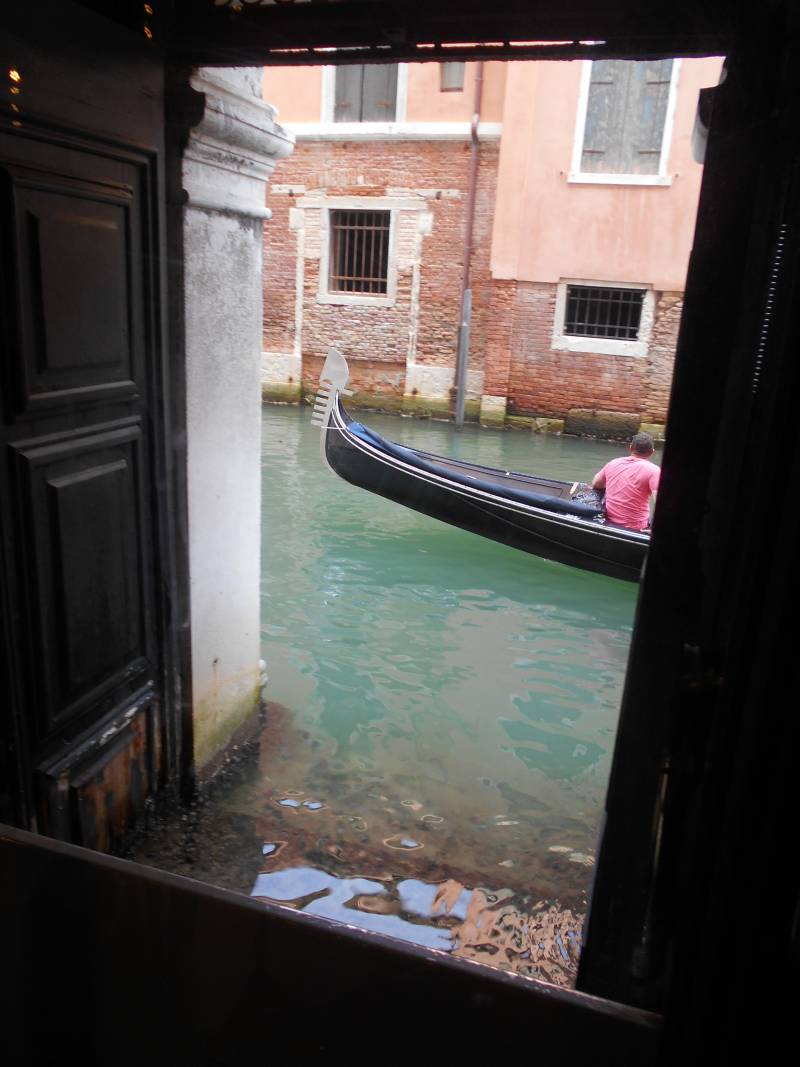 Author:
Vyacheslav Shpakovsky
Articles from this series:
Horsemen in museums. A little about each
Armory of the Venetian Doge's Palace
Knightly and non-knightly armor of the Vienna Imperial Arsenal
Armor of the "sunset era". Vienna imperial arsenal
One day at the imperial arsenal in Vienna
Naval Historical Museum of Venice. Excursion to the “Ship Hall”
Mistress Museum of the Lady of the Mediterranean
Many, many "iron guys." One day at the Army Museum in Paris

We are in Yandex Zen
Chernobyl notebook. Part of 3
My grandfather's front-line letters (part 2)
80 comments
Information
Dear reader, to leave comments on the publication, you must to register.