Military museums of Europe. We continue to explore the collections weapons and armor that are exhibited in Vienna arsenal, and today we have in turn the knightly armor of the "sunset era". What does it mean? It’s just that over time, as it happens very often, the very idea of ​​protecting a person from all types of known weapons has gradually become obsolete. So, already no armor could protect their owner from the stone cannonball. Armor began to pierce the arrows of crossbows and bullets of pistols and muskets. Yes, their creators achieved perfection in them, managed to cover literally every piece of their body with armor, and yet even such perfection did not guarantee against serious injuries and death. Knights, even kings, also perished in tournaments, where, it would seem, everything was done to ensure the safety of those fighting. Another important factor was the price! The time has long passed when the armament of a knight cost 30 cows: 15 - the armament and armor itself, and 15 for a war horse. Now, only the serial field armor of mercenaries-latniks had such a value, and the cost of armor for kings and dukes exceeded ... the cost of a small town! But the armor was also influenced by fashion, so a lot of it was required. They needed to be given to their children, grandchildren and nephews, to be given to the kings of neighboring countries, to order prestige for the sake of no one saying: “But this monarch is impoverished, goes to the tournament twice in the same armor!” And what was to be done? The easiest way is to abandon the armor in general, which was subsequently done. 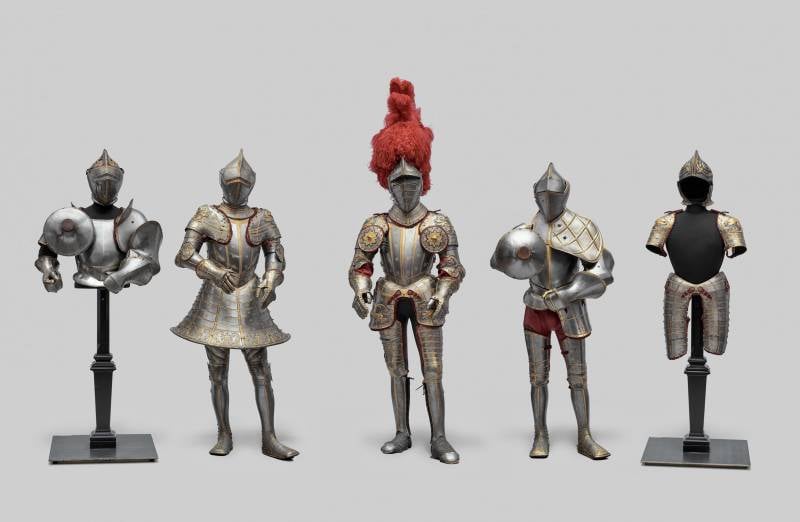 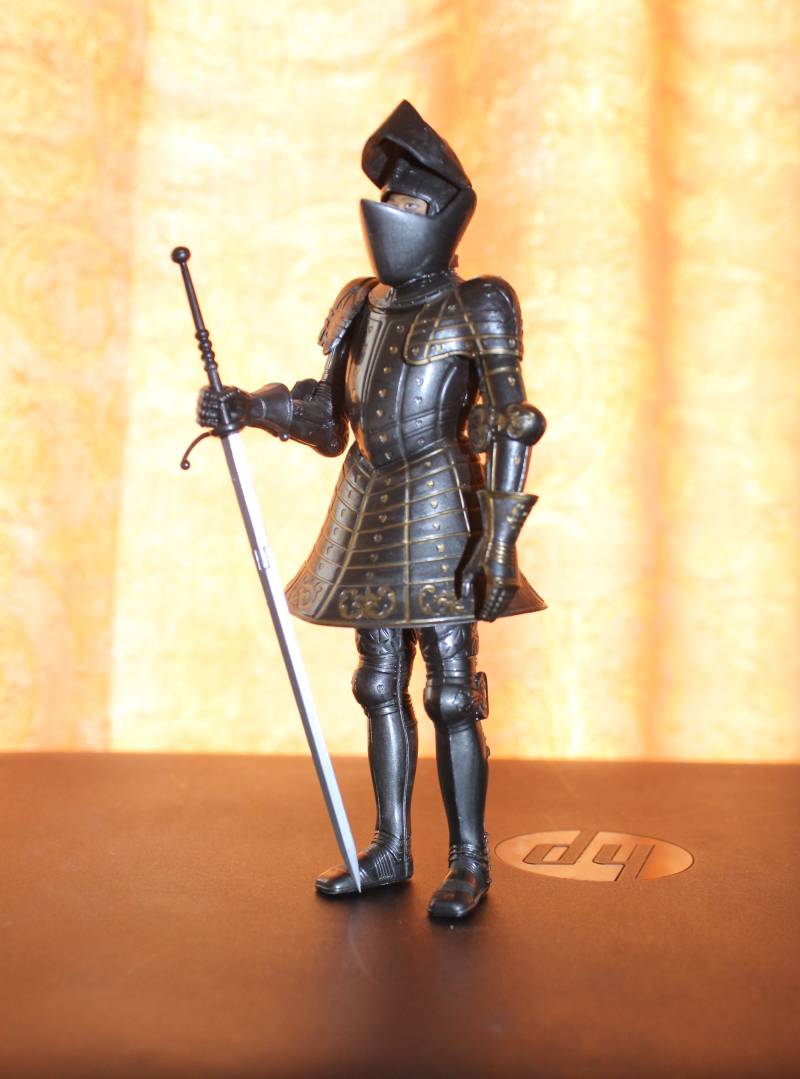 And here it is ... a figure of Ferdinand II of Tyrol himself, in the tournament armor from the Eagle Headset in the scale of 1: 12 (150 mm). A set of parts for the manufacture of this armor was released by Imai (Japan) and Imex (USA) in the first half of the 80 of the twentieth century. An interesting feature of these knightly figures is that their legs and arms are made movable, that is, you can give them poses of their own free will. The leadership of the Vienna Armory, where this headset is located, praised the quality of their manufacture and reproduction of the details of the armor. Then a few more sets appeared, but subsequently their release was for some reason discontinued. I painted the figure not quite right, but then even with paints we had problems, and I did not see the original 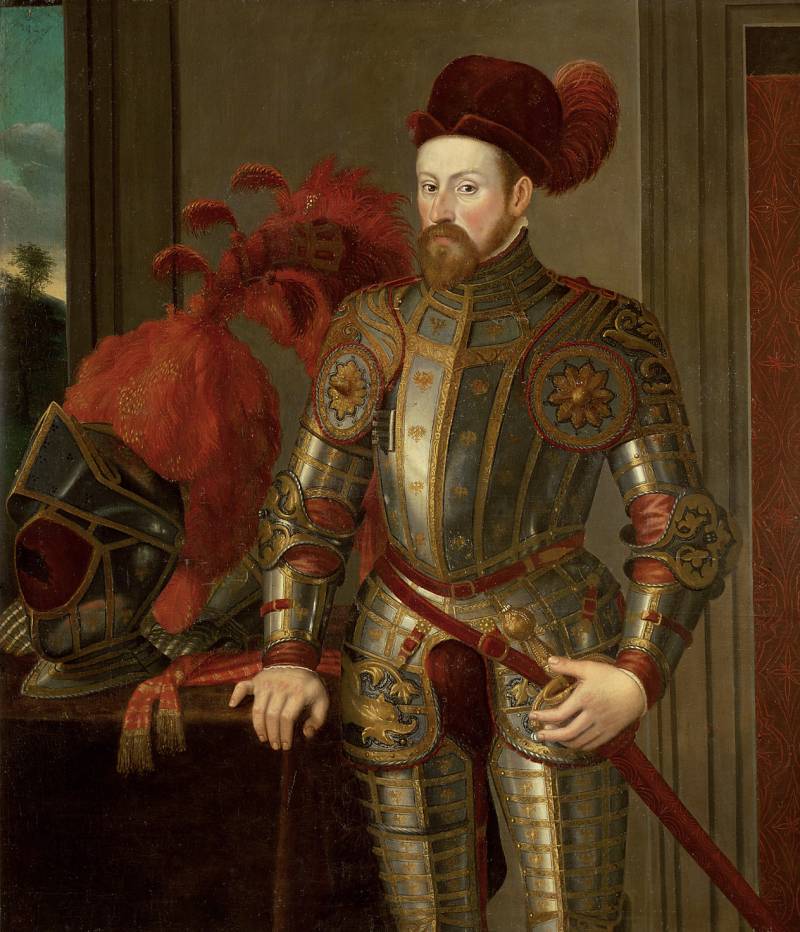 Archduke Ferdinand II (1529-1595), in the armor of the Eagle Headset. Depicted in the so-called "Bohemian hat", a headdress made of felt and silver wire. On the table to his right is a helmet with an open visor; next to him are gauntlets and a purple belt. The portrait according to the style of painting was attributed to the artist Francesco Terzio (circa 1523 - 1591 gg.) And dated approximately 1566 / 67 year, but, most likely, was painted earlier than this time. The fact is that it does not have a chain of the Order of the Golden Fleece, which the Archduke received on 28 of March 1557 of the year, which means that the picture was created before this date

But first, some way out to reduce weapons costs was found in the creation of armored headsets. And in the XVI century, in order to satisfy all the requirements of numerous varieties of the tournament, just such headsets were created in the form of sets of parts that could be combined among themselves so that each time their owners received seemingly new armor. There was clearly a modular layout principle, so widely used today in modern weapons. So this find is far from our days. All this was already in the past, only at that time the modularity of the design was used not in weapons, but in armor. 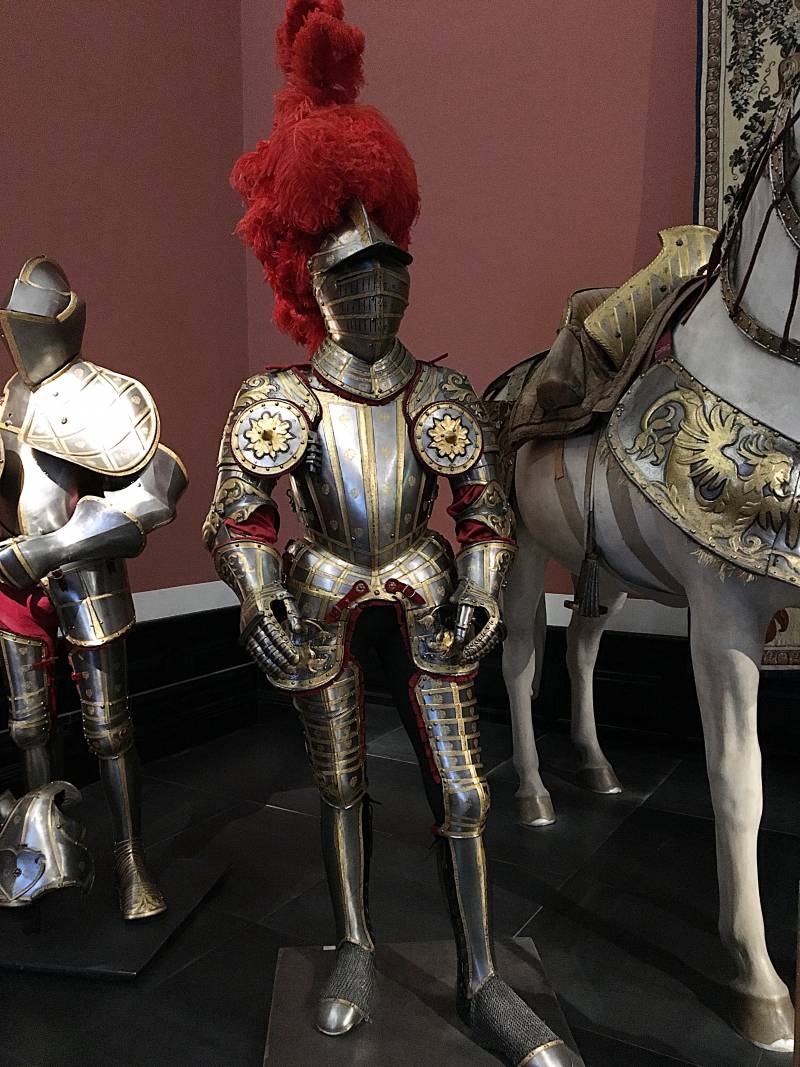 One of the armor of the Eagle Headset by Ferdinand II of Tyrol.

Following the fashion of such headsets and at the same time being quite practical, Emperor Ferdinand I in 1546 ordered for his second son, Archduke Ferdinand II of Tyrol, a suit of armor consisting of 87 individual parts.

This is the largest collection that has survived to this day, and, thanks to its early description in the inventory book of Archduke Ferdinand, it is certainly the best documented. The basic unit of the modular design was the so-called “field armor”, that is, plate knight armor used in field battle. Combining with it various additional details, you can get twelve different armor for equestrian and foot combat. For example, armor for foot combat was distinguished by its curly “bell skirt”.

This headset was made in a typical for that time and quite simple design, and without elaborate details, but with excellent finishes. It was made by Jörg Seusenhofer and the engraver Hans Perhammer from Innsbruck. The set is decorated with images of gilded eagles - which were the heraldic symbols of Austria and therefore was called the “Eagle set” in honor of its characteristic decoration. The price of this pompous set was correspondingly very high and amounted to a huge amount of 1258 gold florins, twelve times the annual salary of a high court official, and in addition, 463 florin was spent on its gilding. 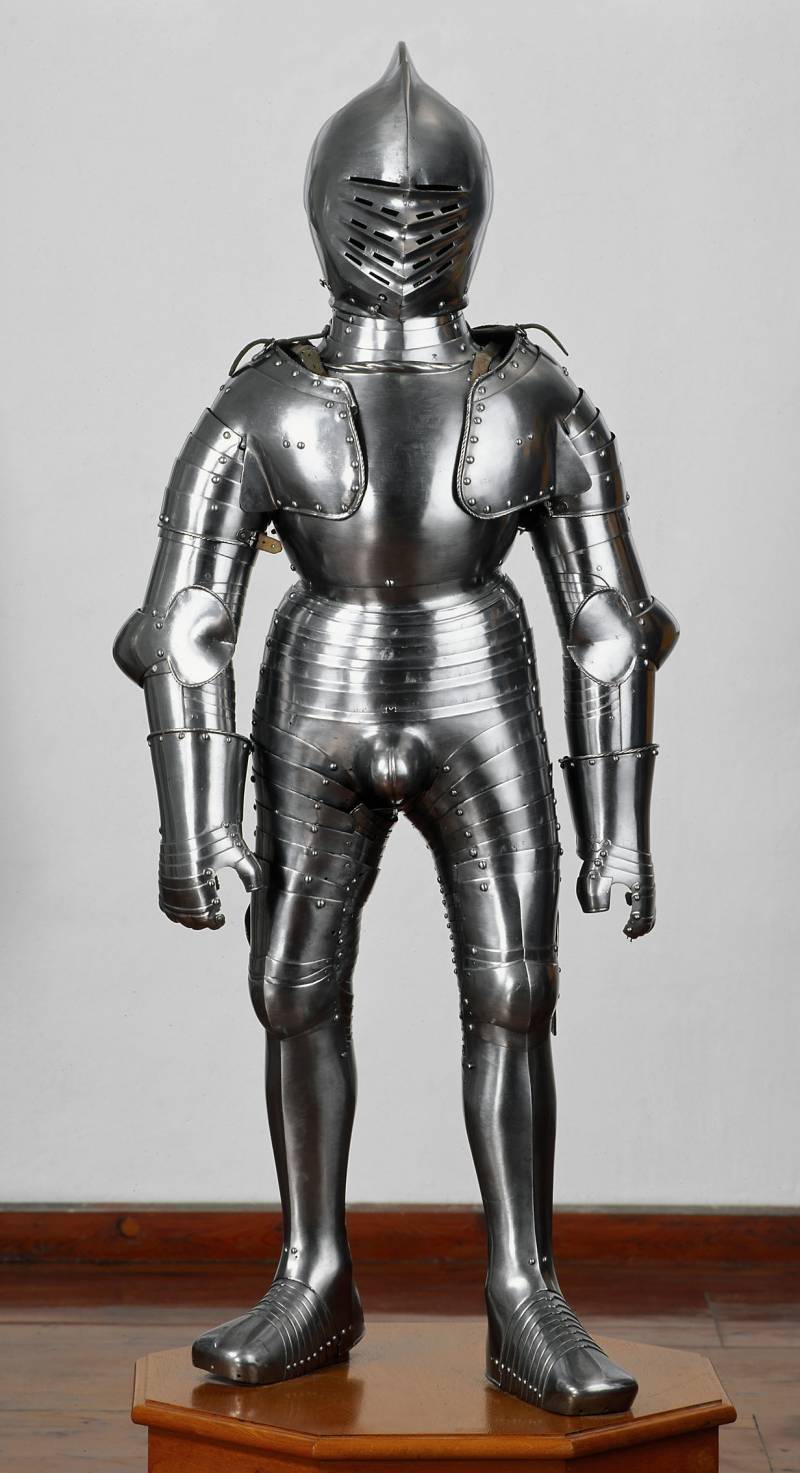 The famous master of armor manufacturing, the “platner,” was Konrad Zeusenhofer, who lived and worked in Innsbruck. Emperor Maximilian I (1493-1519) in the 1504 year entrusted him with the management of the local weapons workshop, which he was in charge of until his death in the 1517 year. Seusenhofer was at the head of a huge company that produced both serial and precious armor for representative purposes. To polish the armor, a drive from a special water mill on the Sill River was used. For serial used stamping. In 1514, Emperor Maximilian I ordered from Seusenhofer armor for the eight-year-old Hungarian king Ludwig II, and the occasion for the gift was the wedding of Louis with Maria, the granddaughter of Maximilian, in 1515. Such holidays were often used just to show off in armor. These armors are mentioned in the oldest documents, starting from the 1581 of the year, as belonging to the collection of Archduke Ferdinand II. It is interesting that, although at that time the “Maximilian” armor had not yet gone out of fashion, the emperor did not consider it possible to order them as a gift, but limited himself to ordinary smooth armor. 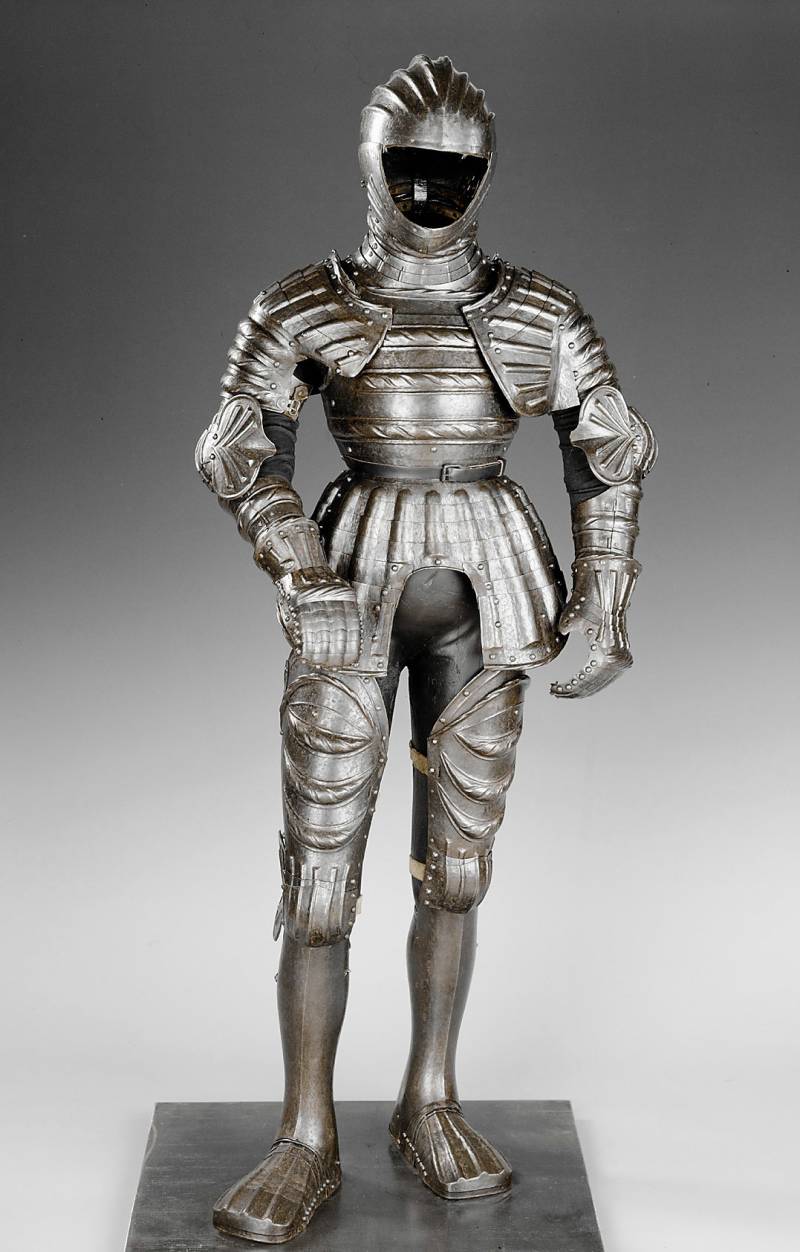 In July 1511, Maximilian I ordered the master Hans Rabeiler in Innsbruck for his grandson Karl (future emperor Charles V (1500 - 1558 gg.)) New fashionable armor. But it so happened that ... the boy managed to grow out of them until the end of work. As a result, they remained incomplete. And it turned out to be very valuable for historians. On an unpolished surface, every blow of the hammer, every trace of painstaking work, is visible. The armor was only finished in the 1514 year, but by the time, of course, he was already late. This is a typical “suit armor” imitating the clothes of that time. There is no visor on the helmet, as well as a spear mount on the right side of the chest, although it is possible that it was not provided for initially. And although the armor was incomplete, it was still stored in the arsenal of Innsbruck and was included in his inventory of the 1583 of the year 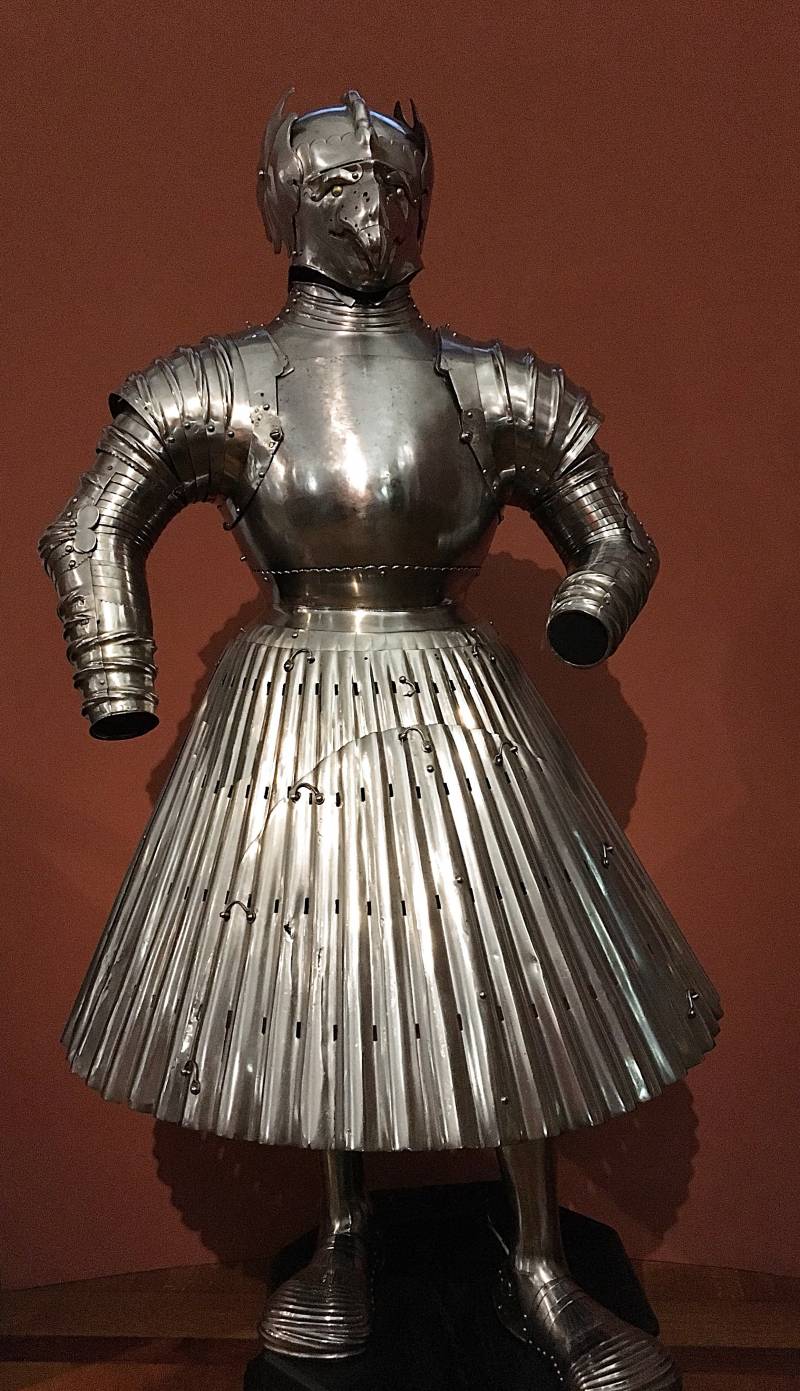 But this completely unusual armor with a pleated skirt, Emperor Maximilian I ordered Konrad Zeusenhofer in the 1512 year. Moreover, these armors were not intended for anyone, but for his twelve-year-old grandson, Duke Albert of Prussia. The master tried to make a Dutch men's suit in metal in metal, part of which was just such a folded skirt. Therefore, such armor is called costume. The question arises, but how did the rider in such armor mount his horse, because the skirt should have interfered with it? But very simple! For riding on a skirt, front and rear cutouts were provided, which were closed with the corresponding details of the skirt, mounted on hooks. When they needed pages or squires, they were removed and ... taken separately, and when the owner of the armor got off the horse, they immediately mounted them in place. Such armor, in theory, was intended for a foot fight in the arena. And by the way, no matter how a boy dressed in such armor would refuse to fight another boy of the same age about his age and ... the corresponding situation ?! 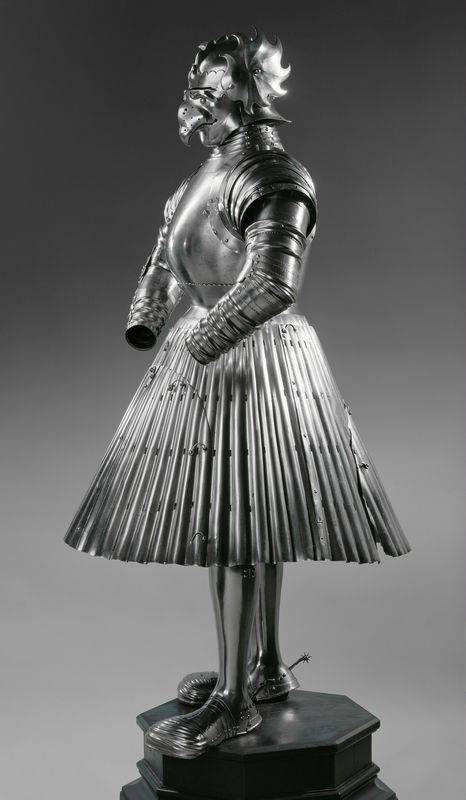 The same armor, side view 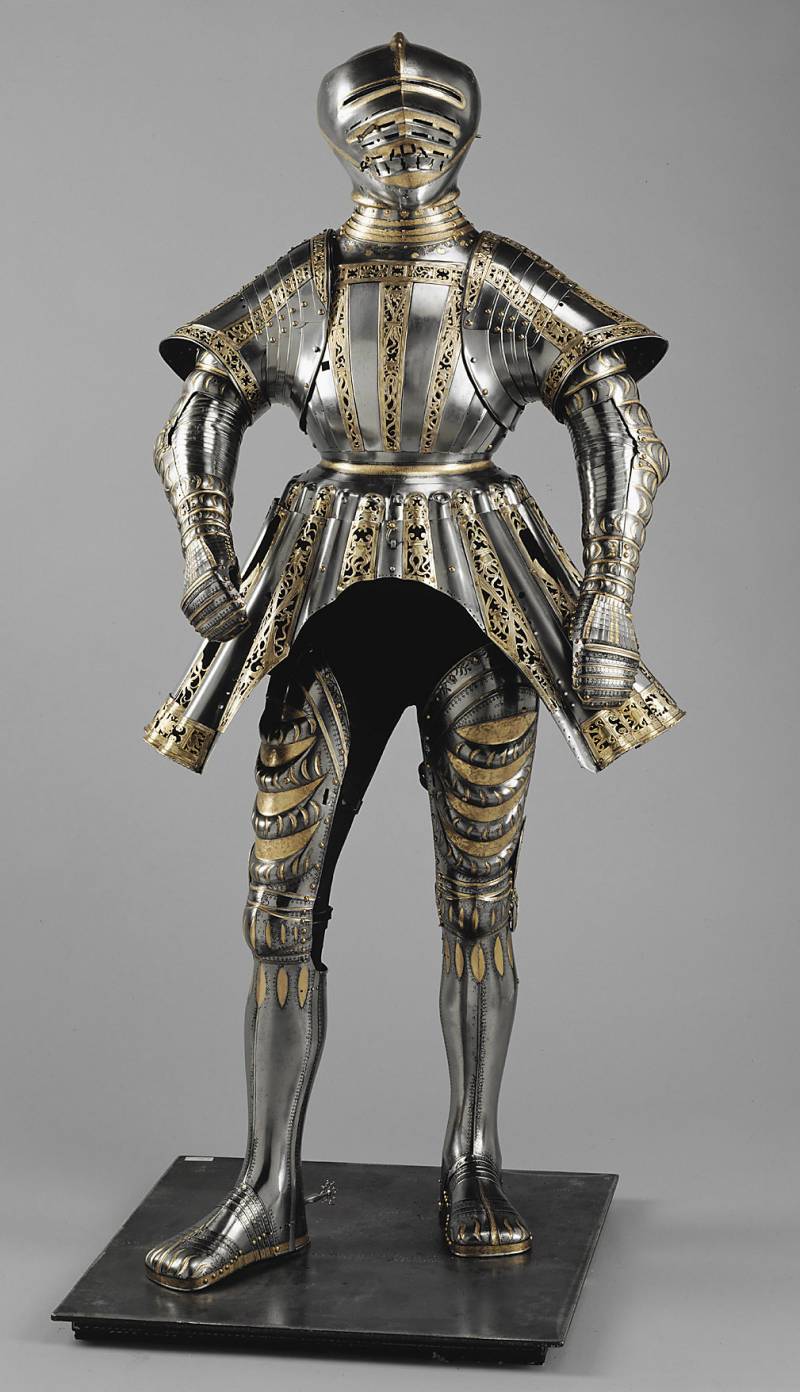 Since Maximilian I didn’t succeed with the present for young Karl, he decided to order one more armor for him, already Konrad Zeusenhofer, and so that they would make it as soon as possible. A man’s suit from Holland with a pleated skirt, the so-called “Schaube” with sewn fabric overlays, was again chosen as a model here. To imitate them, gilded silver stripes with emblems of the Order of the Golden Fleece and St. Andrew's Cross were made on metal. The armor was decorated with mobile and gilding in the style of the Augsburg master Daniel Hopfer

Simultaneously with the armor for this boy, Maximilian I ordered two more armor with pleated skirts for his English ally Henry VIII. One helmet has survived from one of them (Tower of London, Inv. No: IV.22). 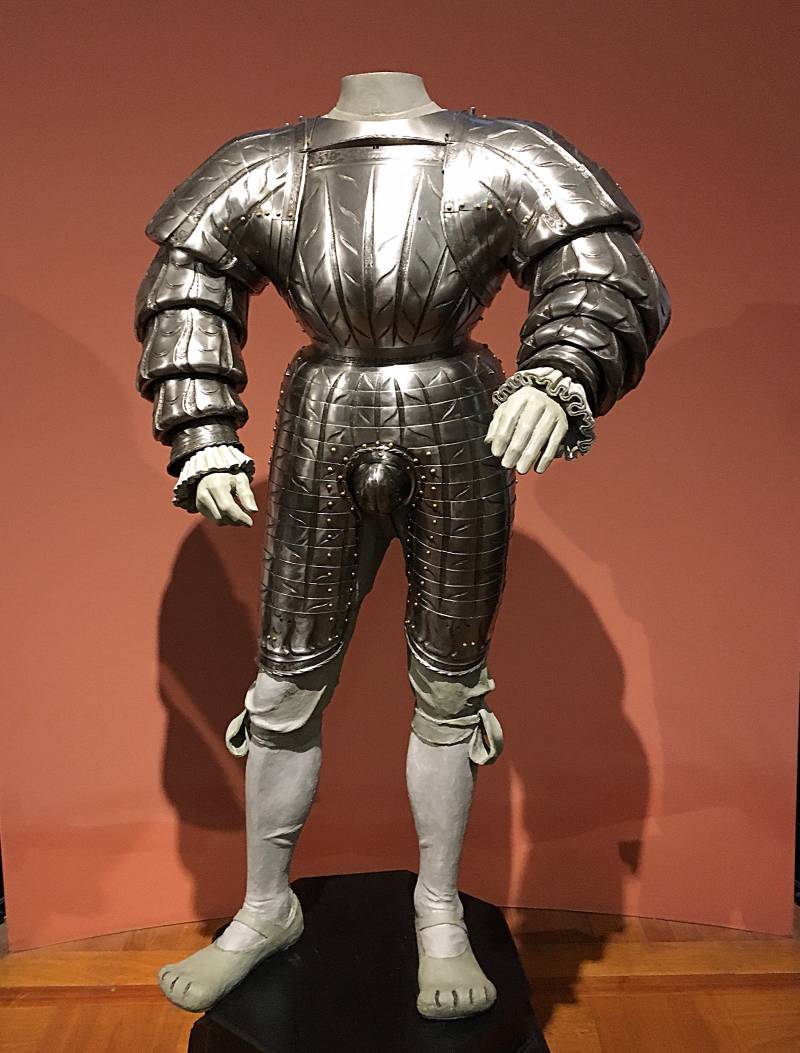 Wilhelm von Roggendorf's unusual armor, made by the gunsmith Helmschmidt, also belongs to the “costume armor”. The master reproduced in metal the traditional clothes of Germanic landsknechts

Of course, “costume armor” could not but surprise. But still they were too pretentious. Meanwhile, almost simultaneously with them, the gunsmiths found other ways to amuse the nobility with a sense of their own significance. However, this is the next time.

Author:
Vyacheslav Shpakovsky
Articles from this series:
One day at the imperial arsenal in Vienna
Naval Historical Museum of Venice. Excursion to the “Ship Hall”
Mistress Museum of the Lady of the Mediterranean
Many, many "iron guys." One day at the Army Museum in Paris