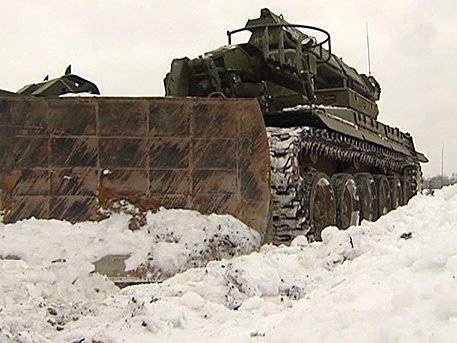 In the second part, we reviewed the main modifications of IMR-2. But the improvement of the machine and its equipment did not stop. They continue to this day.

In the mid-1980s An experimental sample of a trawling device was tested at the IMR. This was due to the fact that the knife trawl of the machine (like the KMT-6 trawl for tanks) did not provide reliable trawling of mines buried more than 30 cm — it was 20%. In the course of the work, a trawler was developed in the form of a frame, which was hung on a universal bulldozer. As a result, the total weight of all components of the trawl was reduced, but the reliability of minesweeping during deepening to 50 cm was only 10% higher. 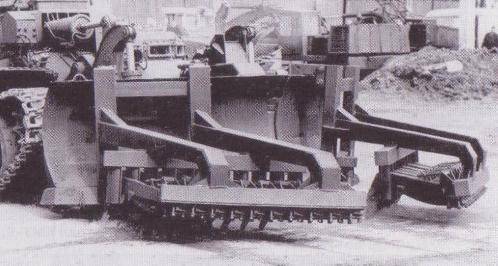 Also in recent decades, many robots have been carried out to modernize and improve the working bodies of WRI. For example, we give a patent for an interesting upgrade (or change) of the IMR-2М capture manipulator:

F41H13 - Means of attack or defense, not related to other groups. The authors of the patent: Kondratovich A.A., Afanasyev V.E., Primak L.V., Cherepanov V.D., Kuptsov V.I.

The invention relates to overcoming barriers and obstacles, in particular forest and stone debris. The engineer vehicle lining contains the 1 base chassis, on which the 2 universal dozer unit and the 3 rotary platform with the 4 telescopic boom are mounted. New in the car is that the telescopic boom is equipped with an 5 gripper with 6 control hydraulic cylinders, made in the form of two jaws pivotally interconnected, one in the form of 7 dozer blade with 8 spikes attached to it, the other in the form of 9 frame with rigidly fixed on her teeth 10.

The invention relates to overcoming obstacles and obstacles, in particular, forest and stone debris.

Known engineering machine lamination IMR-2M, containing a tracked chassis, on which are mounted a universal bulldozer working body and a turntable with a telescopic boom, on which the working body in the form of a gripper-arm is mounted. The disadvantage of this machine is low productivity when making passes in the forest and stone blockages.

The objective of the proposed technical solution is to increase the performance of the machine when making passes in the forest and stone rubble.

A comparative analysis of the proposed technical solution with the prototype shows the possibility of improving the performance of the machine when arranging passes in the stone and forest blockages by a factor of 2-3.

The essence of the proposed technical solution is illustrated by drawings.

WRI works as follows. When making passes in the rubble, where the small fraction prevails, as well as when entering the steep slope, the jaws of the 5 grip are closed (Fig. 3 and 5).

By lowering the 4 telescopic boom, the 5 grab is inserted into the blockage (slope), then the telescopic boom is pulled in and turned into the vertical plane, the dam elements are clamped between the grip and the 2 dozer blade lowered onto the ground, then the base machine moves the dam elements in the right direction. direction (the soil from the slope between the grip and the blade of the bulldozer working body is not clamped, but moves in the direction of the machine, due to which an entry is formed).

When making passes in the rubble, where a large fraction prevails (logs, reinforced concrete slabs, etc.), the 5 grab is exposed (fig.2 and 4). Lowering the telescopic boom 4 and turning the grip 5 in the vertical and horizontal planes to give it the necessary orientation, implant it with the 10 teeth in the roll, simultaneously closing the jaws 7, 9 and clamping the elements of the blockage between them. Then, controlling the 4 telescopic boom and the 3 turntable, move the elements of the dam and the desired direction.

If necessary, these cycles are repeated.

Due to the application of the proposed technical solution, it becomes possible to increase 2-3 times the performance of the machine when making passages in the rubble, the remaining functionality of the machine is preserved.

Perhaps when parsing the dam, such a grip is more profitable. But with it, the universality of the machine is lost. After all, sometimes you need to dig a trench or ditch, remove loose material to the side of the path, and not move it, etc. With a new capture of this you will do

In the armies of other countries of the world (not counting the republics of the former USSR - there is a WRI), there are also engineering machines like WRI-2. They are named differently: a sapper tank, an armored (combat) engineering vehicle, an engineering obstacle vehicle. The composition of the equipment they may also differ from that of the IMR-2, but the range of tasks performed is almost the same. Below - a few representatives of this family.

Sapper tank "CHIEFTAIN" AVRE. “Chiften” is intended to ensure high mobility of tank battle groups by clearing for them the paths of movement in the conditions of mass use by the enemy of obstacles, including mine ones. Instead, the tower mounted cargo tilting platform to accommodate the working equipment. The tank is equipped with an EMP wheel knife mine sweep with a hydraulic control system, UDK1 bulldozer equipment, mounted instead of a trawl for 10 minutes, up to three packs of plastic pipes for overcoming anti-tank ditches, one or two sets of extended clearance charges on L8 trailers, flexible road surface 60, winch with 10 t force, crane equipment. All were ordered 46 demining tanks. 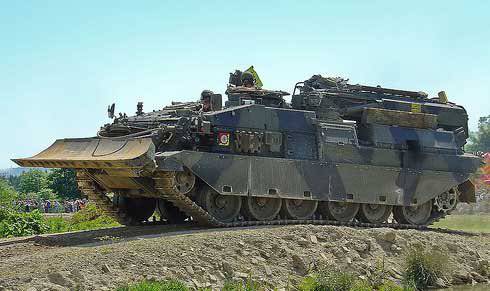 With 2008 and the engineering forces of Great Britain, the Troyan machine is used to solve the tasks of escorting troops. The 33 received such vehicles for the use of engineering units to replace the armed Chiften armored engineering vehicles in service. The chassis of the combat engineering vehicle (BIM) “Troyan” is made on the basis of the components and assemblies of the main combat tank “Challenger-2”. The Troyan vehicle is equipped with powerful modular armor protection similar to the base tank, which should provide protection for the crew against the explosion of an anti-tank mine, as well as against the fire of most anti-tank weapons. Since the machines of this type are often forced to perform engineering tasks associated with the risk to the life of the crew, it is possible to use them in remote control mode. The 7,62-mm machine gun with a remote control is used as a weapon on it.

In the standard version, the Troyan is equipped with a hydraulic dozer blade mounted in the nose. The blade can be used both to destroy obstacles and to quickly prepare firing positions. If it is necessary to make a passage in mine-explosive barriers, it is possible to quickly replace it in the field with a knife mine trawl or a plow-type mine trawl. Making passes in a minefield is also possible in an explosive way. To do this, the "Trojan" can tow on the trailer installation of clearance "Python". If necessary, this machine can be installed electromagnetic mine trawl to destroy mines equipped with proximity fuses. The rear platform is designed to carry various engineering equipment, such as fascines. On the right side of the BIM "Troyan" mounted boom excavator with hydraulic control. To date, only this engineering machine is fully adapted for use in contemporary conflicts. 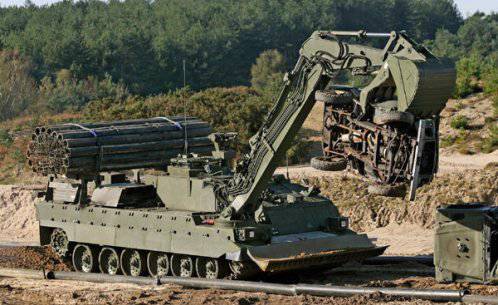 From 2010, British engineering troops began to receive Terrier combat engineering vehicles from the British company BAE Systems. "Terrier" can perform a wide range of work, including the laying of column paths, ensure the advancement of troops through destruction zones, dig trenches, anti-tank ditches, create engineering barriers, and engage in loading and laying fashin. Combat engineering vehicle Terrier is equipped with a system of remote control, which allows you to control the machine at a distance of up to one kilometer. The machine is capable of transporting 5 tons of materials, is armed with an 7,62-mm machine gun, as well as smoke grenade launchers to create a smoke screen, is equipped with an RCB protection system, infrared cameras. The total weight of the Terrier is 32 tons, it has an all-welded armored body and can be additionally equipped with hinged armor. The crew consists of 2 people. 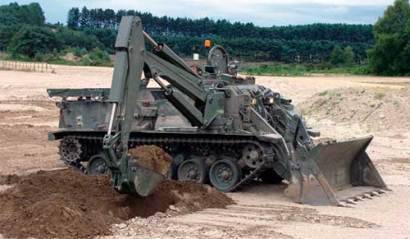 The German engineer tank “Pionierpanzer 2” is designed to assist heavy combat vehicles when they cross water obstacles, as well as to carry out excavation and lifting work in advanced areas. It is a further development of the sapper tank "Pionierpanzer 1", made on the basis of the tank "Leopard 1". The machine is equipped with a telescopic excavator boom, dozer equipment, a set of equipment for electrical cutting and welding, working from an integrated electric generator, a winch capstan with a cable tension mechanism. Armament includes 7,62-mm machine gun. The remote control system of excavator equipment allows you to more accurately carry out excavation, lifting and other work. A box-shaped boom of triangular section is placed on the right side in the front of the case and is placed on the roof in the stowed position. Bulldozer equipment can be equipped with flaps that increase the cutting width up to 3,75 m. The ripper teeth are hinged on the back side of the blade. Equipment for underwater driving can be installed on a sapper tank, providing for overcoming water obstacles to a depth of up to 4 m.

The sapper tank AMX-30 EBG was built on the chassis of the AMX-30 tank bridge structure, but with the new engine, suspension and transmission of the AMX-30В2 modification. It is equipped with dozer equipment with 120 m3 performance per hour. Scraper equipment is also available. When using it, the machine is slowly reversing along the road, aligning it. The machine is equipped with four tubular guides for remote mining areas, as well as a launcher for an extended charge of mine clearance. The main armament is 142-mm cannon, from which 17-kg shells are used for firing. 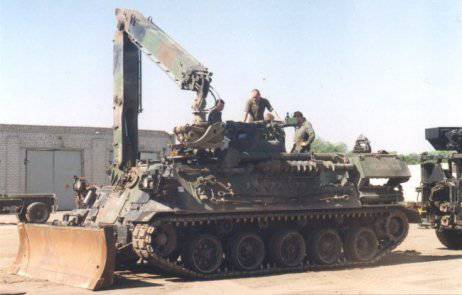 Engineering vehicle lashing MXR M1 Grizzly. The Grizzly (“Bricher”) engineering lashing machine was developed from 1992 and is intended for making passages in minefields, pulling away debris, equipment for crossings through anti-tank ditches and approaches to crossing points through water shelters and sukhodoly, fragments of pits under the slopes (starboard, mounted telescopic boom) and device trenches for combat vehicles. Made on the basis of the tank M1 Abrams. The machine is equipped with excavator equipment, a two-tail mine mine trawl with automatic trawling depth control equipment. On the 10-m telescopic box-shaped boom of triangular section, you can attach a bucket with a capacity of 1,5 cube. m, cargo hook or grab. Armament includes 7,62-mm machine gun and 40-mm grenade launcher. 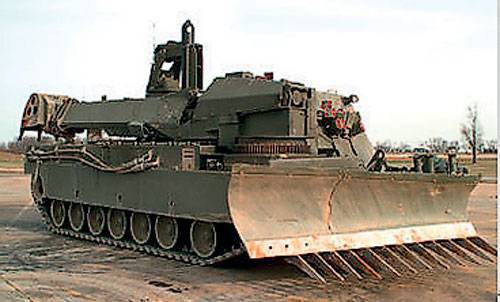 However, unsatisfactory test results and the high cost of prototypes caused the suspension of funding for the Assalt Bricher program. However, in 2007, 33 such machines were purchased for the US Marine Corps. The main engineering equipment of the Bricher BIM is the plow mine trawl mounted on the nose of the machine. With this equipment, the machine can make a continuous passage 4,5 m wide in a minefield from anti-tank and anti-personnel mines equipped with contact fuses at a speed of about 5 km / h. The machine provides for the placement of two elite demining charges "Miklik". The crew BIM two people. Space for accommodation of sappers, additional equipment and equipment is not provided. In addition, this machine is equipped with several video cameras and a remote control system over the air. 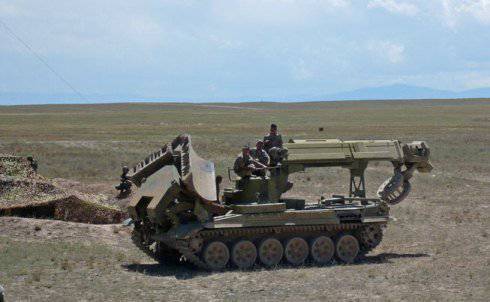 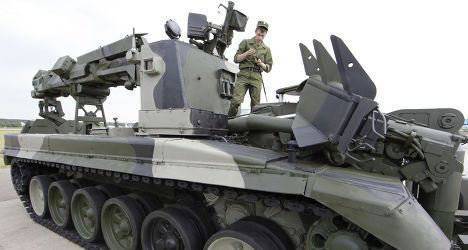 IMR-3. In front of the hull, the KMT-Р3 anti-tank trawl is clearly visible. 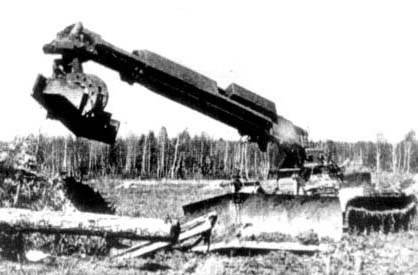 WRI for dismantling the dam