The first armored cars of Austria-Hungary

February 11 2014
3
The idea of ​​creating a protected vehicle with machine-gun or even cannon armament appeared at the end of the 19th century. However, for some time the projects of such technology did not interest the military. An example of the ambiguous attitude towards armored cars can be considered the first Russian car of this class, the Nakashidze-Sharron. Armored car designed by officer MA Nakashidze, was built with a series of 12 machines (the Russian army received only 10). Despite the relatively large number, these armored vehicles were used only for several years, and were subsequently written off and disposed of. In some other countries, the fate of armored vehicles was even worse - there such projects reached only the prototype testing stage, after which they were sent to the archive.

History The armored cars of the Austro-Hungarian Empire began in the year 1904, i.e. a little later than the development of his project began MA Nakashidze Austro-Daimler, on its own initiative, began creating an armored car of its own design. The author of the idea and the chief designer was Paul Daimler - the son of the famous Gotlieb Daimler. It was assumed that the new project will combine a number of modern developments and will significantly increase the combat potential of the army. At the same time, it was planned to work out some new technologies and technical solutions for the Austro-Hungarian industry. 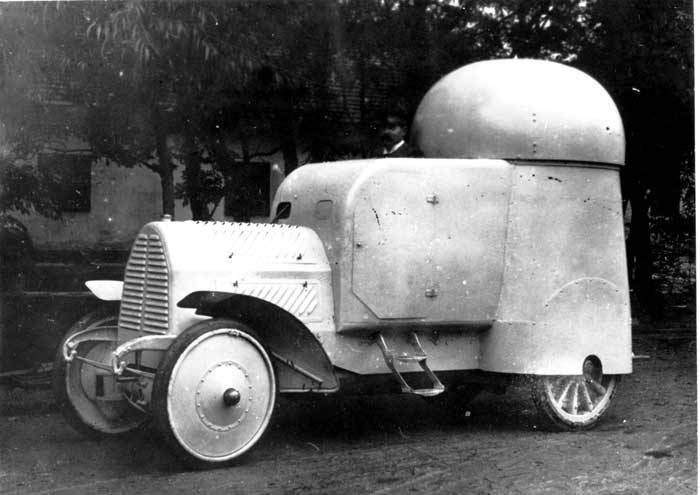 When developing a new project that received the uncomplicated name Panzerwagen (Armored Car), Austro-Daimler specialists took into account some features of the proposed combat work of such equipment. The Austrian engineers understood that the prospective armored car would have to travel not only along the roads, but also over rough terrain, which made corresponding demands on the power plant and the undercarriage. The level of development of weapons identified the necessary characteristics weapons and protection.

Taking into account all these requirements, the designers, under the leadership of P. Daimler, created a design of an armored car with a combat mass of about 3 tons. As the basis for the armored car, they chose an all-wheel drive two-axle chassis, which was designed taking into account the developments that were available to the Aastro-Daimler. To ensure sufficient running characteristics, it was proposed to equip the Panzerwagen armored car with a four-cylinder hp petrol engine rated at 35. self-developed. Such units of the chassis and powerplant made it possible to give a relatively heavy machine acceptable mobility.

The armored hull of the new machine was supposed to be made of metal sheets with a thickness of 3 (roof and bottom) and 3,5 of millimeters (forehead, stern and sides). Without having the necessary knowledge about the features of booking equipment, Austro-Hungarian designers developed a complex-shaped body, which was a combination of straight and curved panels. All parts are connected to each other using rivets. The rear "cylinder" of the armored hull did not have a roof. Instead of the roof, there was a characteristic dome of the tower, made of armor 4 mm thick. Armor thickness from 3 to 4 millimeters provided protection against small arms at distances more than 100 meters. 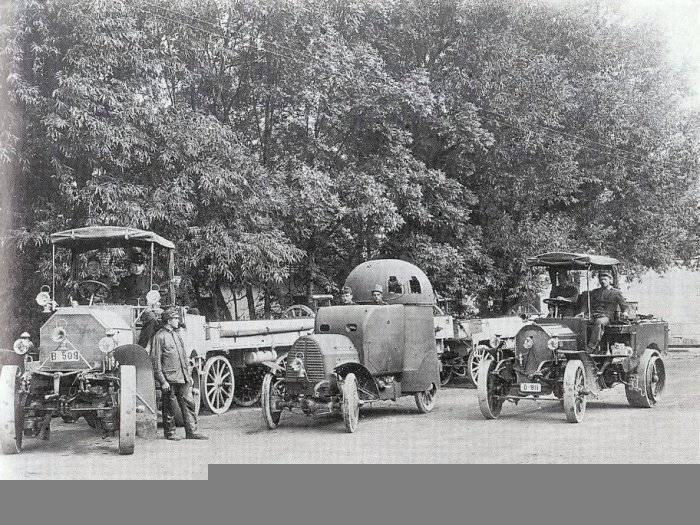 Structurally, the body of the first Austro-Hungarian armored car can be divided into three parts. In front of it was the engine compartment, separated from habitable volumes. Behind it was located the department of management, in which the workplaces of the driver and his assistant were provided. The aft part of the hull of a characteristic cylindrical shape was a fighting compartment with a rotating turret and the shooter’s workplace. For boarding and leaving the car, the crew could use two doors in the sides of the control compartment. In addition, provided for the hatch above the jobs of the driver and his assistant. To service the engine in the hood there were several large hatches.

To monitor the environment and the expensive driver and assistant could use only two small hatches in the front plate, covered with armored valves. Since these hatches did not provide a sufficient overview of the front hemisphere, and the observation of the side sectors was completely excluded, P. Daimler and his colleagues had to come up with special mechanisms for installing seats. Outside the battlefield, a driver with an assistant could raise their seats to 12 inches (about 30 cm), thanks to which their heads turned out to be outside the armored hull and the view was significantly improved.

The armament of the Austro-Daimler Panzerwagen armored car consisted of one Vickers machine gun (British version of Maxim machine gun) of 7,7 mm caliber. This weapon was installed in the embrasure of an armored tower. Later it was proposed to equip an armored car with two machine guns of this type.

With a combat mass of about 3 tons, the prospective armored car turned out to be relatively compact. Its length was equal to 4,1 meters, width - 2,1 m and height - 2,7 m.

In 1905, the first and, as it turned out later, the last instance of the Panzerwagen armored car was built. Austro-Daimler presented its new development to the military of Germany and Austria-Hungary, but in both cases the armored car was met with little enthusiasm. However, in 1906, the new armored car took part in the teachings of the Austro-Hungarian army. During the exercises, the first armored vehicle of the Austro-Daimler company showed fairly high performance, but they could not change the opinion of the military.

The commanders of the Austro-Hungarian Empire did not consider armored vehicles a promising direction. They believed that any enemy defense could be broken through by infantry and cavalry with the support of artillery. In such a strategy, armored cars simply had no place. In addition, according to some sources, the armored car did not like the emperor Franz Joseph I: the engine of the car made too loud noises and thereby frightened the horses. As a result, the Austro-Daimler Panzerwagen armored car remained in a single copy.

The second Austro-Hungarian armored car project appeared in 1906 year. This time, Ehrhardt took over. Designers under the leadership of Gerhard Ehrhardt intended to create an armored car, the purpose of which was different from the car Panzerwagen company Austro-Daimler. At the beginning of the last century, the development of aeronautics led to the emergence of balloons suitable for use by artillery spotters. In the future, the balloon could have mastered other military "professions". In this regard, the company Ehrhardt proposed to create a special armored car that can destroy enemy aircraft. Thus, the Ehrhardt M1906 was to be the first anti-aircraft armored car in the world. 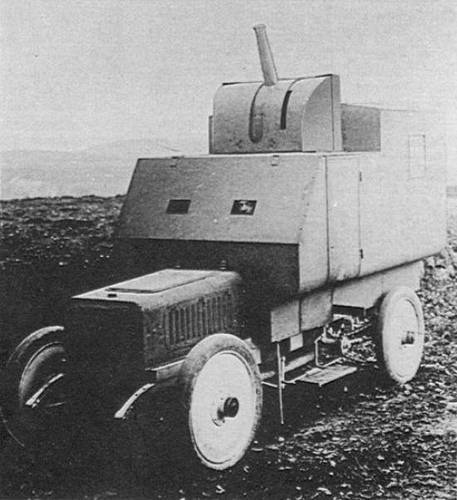 The basis for a promising armored vehicle called the Ehrhardt M1906, 5 cm BAK L / 30 was the four-wheeled chassis of the Ehrhardt truck. A two-axle chassis with rear driving and front steering wheels equipped with a hp 50 petrol engine. An interesting feature of the chassis was the drive of the rear wheels: the engine torque was transmitted to the axle using a chain transmission. Both axles of the chassis had elliptical leaf springs.

Having no experience in such things, the designers of the company Ehrhardt offered to make an armored car body of steel sheets with a thickness of 5 mm (according to other data, 3 mm). The base chassis engine was covered with an armored casing with shutters for cooling and service hatches. Behind the engine casing placed the main part of the armored hull, made in the form of a design of several flat panels connected with each other. The deployment of weapons and crew jobs affected the shape of the armored hull. Thus, the roof of the fighting compartment in the aft part of the armored car was higher than the roof of the command compartment. Thanks to this, a crew of five people was able to be placed in manned space: it consisted of a driver-mechanic, an assistant driver and three gunners.

Two crew members were placed in front of the manned volume. They had to watch the situation through two small hatches in the front sheet. To protect against enemy fire, they could use armored dampers. Side hatches in the doors were not provided. It is worth noting that Ehrhardt employees did not complicate the construction of their armored car M1906, based on the desire to facilitate the work of the crew. The roof of the office had no hatches, and the crew seats were rigidly fixed. Because of this, the driver and his assistant had to use only small observation hatches, which affected the convenience of driving.

The reason why the M1906 armored car did not receive the top hatch of the driver and assistant, can be considered the placement of its weapons. In the middle of the roof was supposed to install a tower of complex shape. The stern of the tower was housed in a special neckline of the aft superstructure of the hull. This provided greater convenience to the work of gunners, however, it had an effect on the tool pointing angles. The turret could only rotate 30 ° to the right and left of the machine’s longitudinal axis. To perform anti-aircraft tasks it was considered sufficient.

In the armored turret, they installed an 50-mm Rheinmetall 50mm BaK M1906 cannon with a barrel-sized 30 caliber. The fastening system made it possible to direct the weapon in a vertical plane with elevation angles from -5 ° to + 70 °. The maximum height of target destruction reached 7500-7700 meters, which exceeded the capabilities of the aircraft of that time. Service instrument had to be calculated from three people. In the layouts of the combat compartment of the armored car, it was possible to place the ammunition in 100 shells of the 50 caliber. Thus, the Ehrhardt M1906, 5 cm BAK L / 30 armored vehicle could fire enemy balloons and airships from a sufficiently long distance for a long time. As practice later showed, such anti-aircraft systems could be useful for the troops.

The first Austro-Hungarian anti-aircraft armored car of the Ehrhardt company turned out to be noticeably larger than the previous development presented by the Austro-Daimler company. The M1906 machine had a length of the order of 5,5 meters and a width of about 2 m. The total height of the armored car due to the relatively large tower reached the 3,1 meter. The combat weight of the machine was 3,2 tons.

Until the end of 1906, Ehrhardt managed to complete the construction of the first armored vehicle of the new model. During the test, the car showed good performance. On the highway, it could accelerate to 45 km / h. Fuel enough for 160 kilometers. The characteristics of the 50-mm gun allowed to reliably hit all existing and future enemy balloons. In addition, if necessary, an armored vehicle could attack enemy ground targets.

Despite the fairly high performance, the leadership of the armed forces of Austria-Hungary, abandoned the proposed anti-aircraft armored car. Apparently, the reason for this was the general rejection by the military of the very idea of ​​an armored car, as well as doubts about the need for a special anti-aircraft machine of this class. In some sources, however, insufficient lead angles and poor reservations are mentioned as the cause of the failure. This version looks plausible, but the history of the Austro-Daimler Panzerwagen project makes one doubt its veracity. Either way, the armored Ehrhardt M1906 remained in a single copy. The functions of this machine later performed unarmored vehicles with artillery armament mounted on an open platform.

The specific views of the commanders of the Austro-Hungarian Empire led to the fact that manufacturers of weapons and military equipment from this country either refused to develop projects of armored vehicles, or began to offer them to foreign countries, primarily Germany. As for the Austro-Hungarian army, it remained without armored cars for several years. The importance and necessity of such a technique the Viennese generals understood only ten years after the appearance of the Panzerwagen machine. The following armored car projects began to appear only after the start of the First World War, and the first serial armored car (it was Junovicz Panzerwagen PA1) was assembled only at the end of the 1916 year.