February 18 2014
4
Until a certain time, the commanders of the Austro-Hungarian Empire did not see the point in armored vehicles. According to their views, any enemy defense could be broken through with the help of artillery, infantry and cavalry. At the beginning of the 20th century, various countries began work on armored car projects, and Austria-Hungary was no exception. However, the military got acquainted with new projects and were not interested in them. In the existing strategy there was simply no place for such equipment. Because of this, by the beginning of World War I there was not a single armored car in the Austro-Hungarian army.


The first months of the war showed how the warlords were mistaken. In a positional war with numerous trenches, barbed wire and other fortifications, even a few armored vehicles could provide serious support to the advancing troops. Seeing the potential of such technology, the army commanders called on the industry to develop new armored cars. Engineers responded to the call and soon there were several new projects.

Already in 1915, the Hauptman Yunovich proposed his own design of an armored car. The project implied the use of an existing automobile chassis, on which it was proposed to mount an armored hull with crew jobs and weapons. An interesting feature of the project, which interested the military, was the possibility of using as a basis for the armored car several chassis that were available at that time. Thanks to this, Austro-Hungarian factories could build armored cars relatively quickly and simply, equipping the existing machines with all the necessary equipment. The project received the designation Panzer Auto 1 or PA1 ("Armored car-1"). 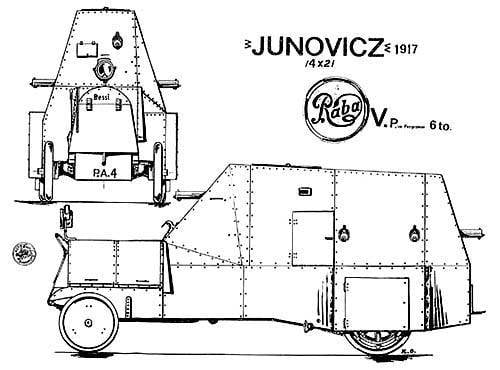 Apparently, Hauptman Yunovich initially took into account the capabilities of the country and for this reason provided for the possibility of using several basic chassis. Looking ahead, it should be noted that the five built PA1 armored vehicles were based on three variants of the chassis (according to other data, on five). So, the base for three cars became the Fiat 40PS truck, besides cars of Bussig and Saurer firms were used. All chassis had a number of common features, such as similar dimensions and chassis parameters. Four-wheel rear wheel drive chassis equipped with gasoline engines with power 40 hp (Fiat 40PS) and 35 hp (other chassis).

On the base chassis of the Junovicz PA1 armored car was installed a housing made of several steel sheets. For its time, the new armored car had a fairly high level of protection. So, the front hull sheet had a thickness of 7 mm, and the rest - on 5 mm. Thanks to this, the crew of a five-person vehicle was protected from bullets and shell fragments. The armored hull of the PA1 had an interesting shape. The armored car's engine was covered with a hood with a characteristic semicircular cover. The front sheets of the habitable part of the hull were installed at a relatively large angle to the vertical. Boards and feed also had a slight inclination inward. The front wheels were protected from the bullets of the enemy by large armored discs-shields, and the rear, together with the chassis, were covered with side hulls.

The crew, consisting of five people, was to be located in a single habitable volume, which united the command and control sections and the combat section. In front of the habitable volume, at the right side was located the control post with the workplace of the driver. He could follow the road with the help of a medium-sized hatch in the front sheet, if necessary, covered with an armored guard. Near the driver's hatch there was an embrasure for installing a machine gun. In addition, the place to install the machine gun provided for in the sides and stern of the machine. Thus, the PA1 armored vehicle could carry several machine guns and fire at targets in any direction.

The capabilities of the Austro-Hungarian army were more modest than we would like, and therefore Yunovich’s armored personnel carriers received only two Schwarzloze M07 / 12 machine guns of 7,92 mm caliber. One of them was supposed to be on the fastenings of the frontal sheet, and the second was supposed to be transferred to the correct embrasure depending on the tactical situation. 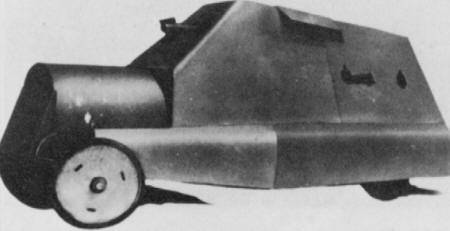 Junovicz PA1 armored cars turned out to be relatively large and heavy. Their combat weight exceeded 5 tons, and their length reached the 5,7 meter. The width and height of the car were approximately equal to 1,9 and 3,5 m, respectively. Despite this, during the tests, new armored cars showed good handling characteristics. On the highway, the Yunovich design cars developed speeds up to 50-55 km / h and had a cruising range of the order of 330-340 kilometers.

The commanders of the Austro-Hungarian Empire got acquainted with the test results of the PA1 armored car and ordered the mass production of a new car to begin. In 1916, the assembly of the last of the five armored cars of the new model was completed. It is known that these vehicles served in the Balkans, after which they had a chance to fight against the Russian troops. Finally, by the end of the First World War, all five PA1 armored vehicles went to the Italian front, where they were to take part in the next offensive. The further fate of the armored cars of the Hauptmann Yunovich is unknown.

Shortly after Yunovich, Hauptmann Romanik and Chief Lieutenant Fellner presented their project of a promising armored car. The new armored car was named after the first letters of the names of its creators - Romfell. As before, the creators of the new armored vehicle took the existing car chassis as a basis for it and equipped it with an armored body. In the Romfell project, several original ideas were applied, designed to enhance the fighting qualities of the armored car. 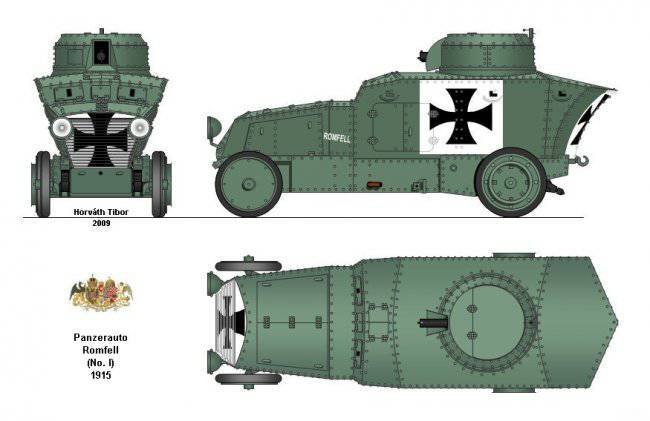 Unfortunately, accurate information about the base chassis is missing. According to some data, a Mercedes truck with a petrol engine with an 90 hp power was chosen as the basis for the new armored car. The chassis of the truck was to provide a relatively heavy armored vehicle with high mobility characteristics.

On top of the base chassis, Romanik and Fellner suggested installing their own armored hull. The corps consisted of several armor plates 6 mm thick. A characteristic feature of the Romfell armored car was the shape of the armored hull: there were only a few straight panels in the hull design. All other parts had a complex concave shape. It was assumed that the original shape of the body will minimize the size and weight of the machine, while maintaining acceptable internal volumes. A low cylindrical tower with a conical top was placed on the roof of the armored car.

The crew of two or three people was to be located inside the habitable volume of the body, separated from the engine compartment. Jobs of two crew members were inside the hull, the third - in the tower. For landing and leaving the car in the sides of the hull there were double doors. The crew could observe the situation and fire from personal weaponsusing several hatches in the sides and stern of the machine. The Romfell armored car was one of the first armored vehicles in the world equipped with radio communication systems. To maintain communication with the command and other units, several armored vehicles of this model received a wireless telegraph. 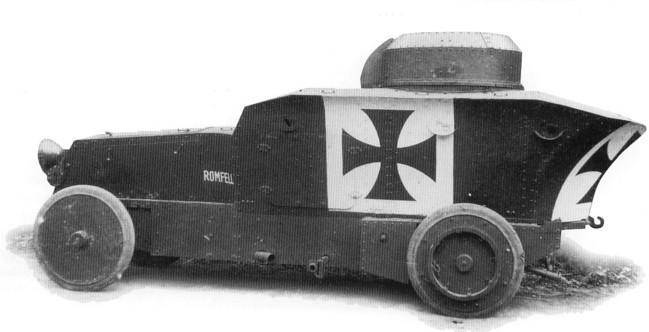 The standard armament of the Romfell armored vehicle consisted of a single Schwarzloze M07 / 12 machine gun with 3000 ammunition ammunition. The machine gun was placed in a rotating turret, which allowed the shooter to attack targets in any direction. A large cut-out in the frontal part of the turret, intended for the installation of a machine gun, made it possible to fire with large elevation angles. Thanks to this, the new armored car could attack both ground and air targets.

In the middle of 1915, the military familiarized themselves with the new armored car, and soon a contract appeared to build the first batch of production vehicles. The Romfell armored car turned out to be relatively light - its combat mass did not exceed 3-3,5 tons. At the same time, it turned out to be quite large: the length is about 5,7 m, the width is about 1,8 m and the height is 2,5 m. However, the used chassis did not have very high characteristics, which is why the mobility of the armored car left much to be desired. The maximum speed on the highway did not exceed 30 km / h, and the cruising range was limited to 140-150 kilometers.

According to some reports, before the end of the First World War 6-8 Romfell armored cars were built. They had different chassis, which was due to the possibilities of Austria-Hungary. For example, there is information about the existence of an armored car based on the captured Italian chassis of Fiat. Built armored cars differed from each other not only the chassis, but also the hull design, which also slightly changed depending on the production capabilities. 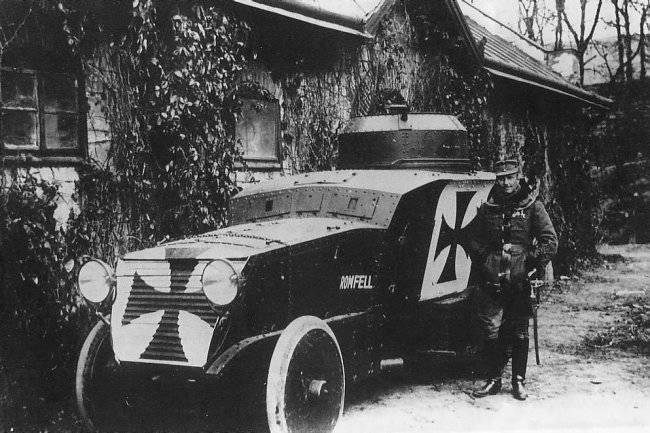 It is known that the Romfell armored cars were used in the Balkan and Russian fronts, after which some of the vehicles of this type were transferred to units that were preparing to fight with Italy. In 1919, one Austro-Hungarian armored car became a trophy of the Romanian troops, who used it for some time.

Yunovich, Romanik and Fellner were able to create quite interesting projects of armored vehicles. However, the state of the Austro-Hungarian industry did not allow to master the mass production of new technology, which accordingly affected the effect of its operation. At a time when some countries produced armored cars in batches of several dozen units, Austria-Hungary was able to assemble only a dozen two types of vehicles. The main reason for such failures should be considered the opinion, which adhered to the Austro-Hungarian command until the beginning of the First World War. The military did not consider armored cars a promising and important technique and did not support their development. As a result, already during the war, the country had to catch up, and there was not much success in this.