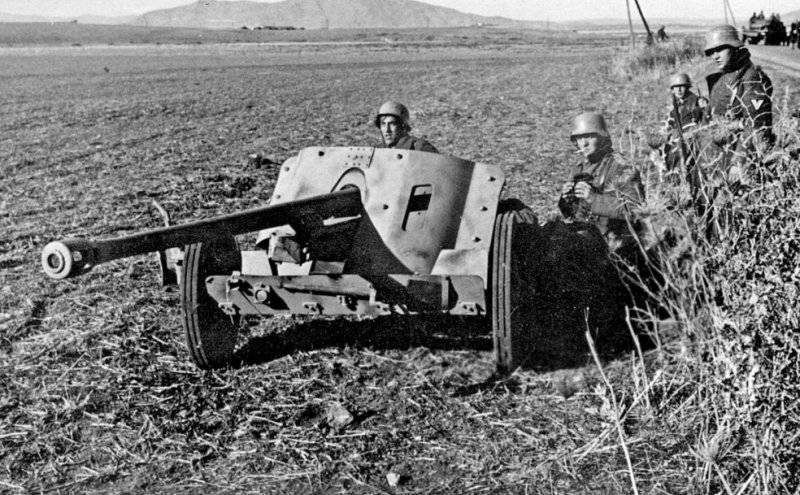 Contrary to popular belief, formed by feature films, literature and computer games such as "World of Tanks", the main opponent of the Soviet tanks on the battlefield were not enemy tanks, but anti-tank artillery.

Tank duels, of course, happened regularly, but not so often. Large counter tank battles in general can be counted on the fingers.

After the war, ABTU conducted a study on the causes of the defeat of our tanks.

The numbers are of course strongly rounded, since it is impossible to determine exactly what each tank was destroyed with. The tanks on the battlefield were fired by everything that could shoot. So during the battles near Kursk, the destruction of the heavy PTCS "Elephant" was recorded by direct hit of an 203-mm projectile. Accident is of course, but coincidence is very significant.

37 mm anti-tank gun Rak. 35 / 36 was the main anti-tank weapon with which Germany entered the war. 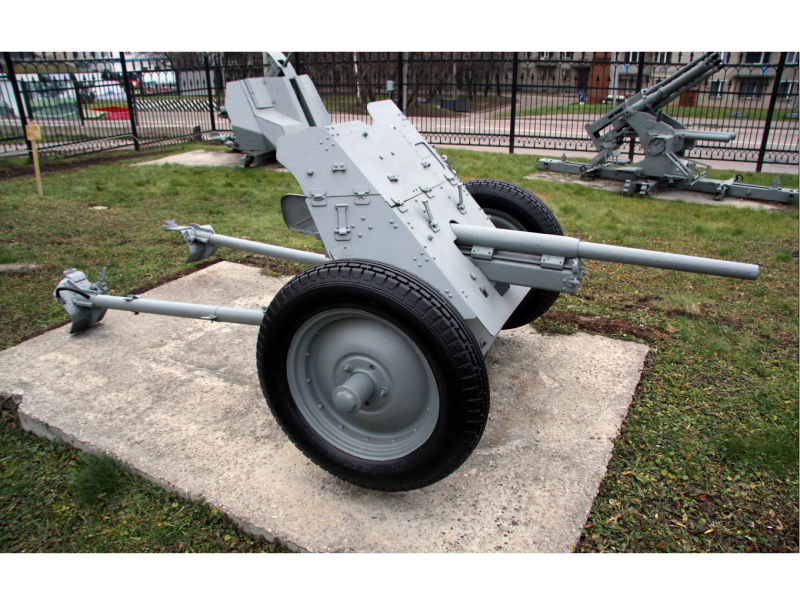 The development of this tool, bypassing the restrictions imposed by the Versailles Treaty, was completed at Rheinmetall Borsig 1928. The first models of the gun, which received the name So 28 (Tankabwehrkanone, i.e. anti-tank gun - the word Panzer came into use later) were sent to the tests in the 1930 year, and with 1932, deliveries to the troops began. The Reichswehr received a total of 264 such guns. Tool So 28 had a barrel length 45 calibers with a horizontal wedge, providing a sufficiently high rate of fire - up to 20 rds / min. The carriage with sliding tubular beds provided a large angle of horizontal pickup - 60 °, but the chassis with wooden wheels was designed only for horse traction.

By the end of the 20-ies, this tool, perhaps, was the best in its class, far ahead of development in other countries. It was shipped to Turkey, Holland, Spain, Italy, Japan, Greece, Estonia, the USSR and even Abyssinia. In the USSR, 12 of such guns was supplied, and 499 was also manufactured under license in 1931-32. The gun was adopted as "37 mm anti-tank gun arr. 1930. The famous Soviet Forty-Fang, the gun of the 1932 model, is descended from Tak 29. But the German military gun did not satisfy because of too low mobility. Therefore, in 1934, it was upgraded, getting wheels with pneumatic tires that can be towed by a car, an improved carriage and an improved sight. Under the designation 3,7 cm Pak 35 / 36 (Panzerabwehrkanone 35 / 36), the gun came into service with the Wehrmacht as the main anti-tank weapon.

The sector of horizontal shelling of guns was 60 °, the maximum angle of elevation of the barrel - 25 °. The presence of an automatic wedge-type shutter mechanism provided the 12-15 shots per minute rate of fire. For aiming gun used telescopic sight. 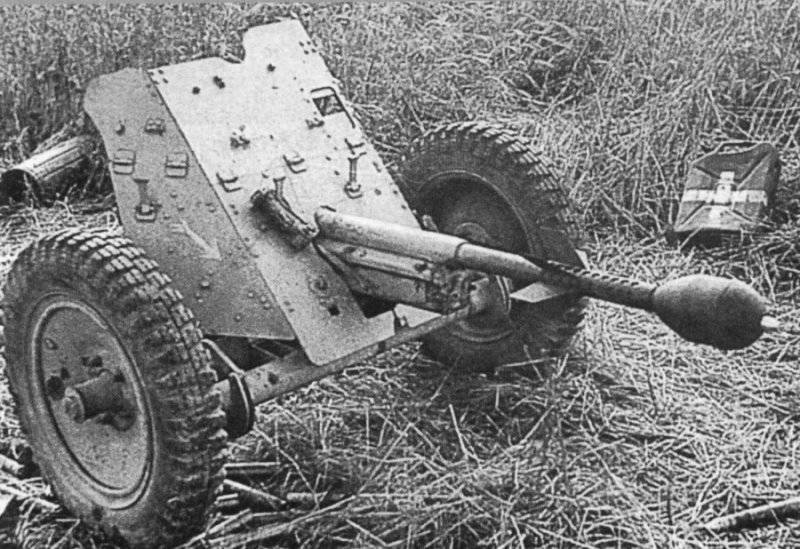 Shooting was carried out with unitary shots: fragmentation and armor-piercing. The 37-mm armor-piercing shell of this gun was punched at a distance of 100 m armor with a thickness of 34 mm. The 1940 model's sifting projectile had armor penetration at this 50 mm distance, and, in addition, a special 9-mm CHXXX, with a maximum range of 35 m, was developed for the 9K CH.9 gun. The total range was built around 36 mm, with a maximum range of 180 m. 300 / 16. 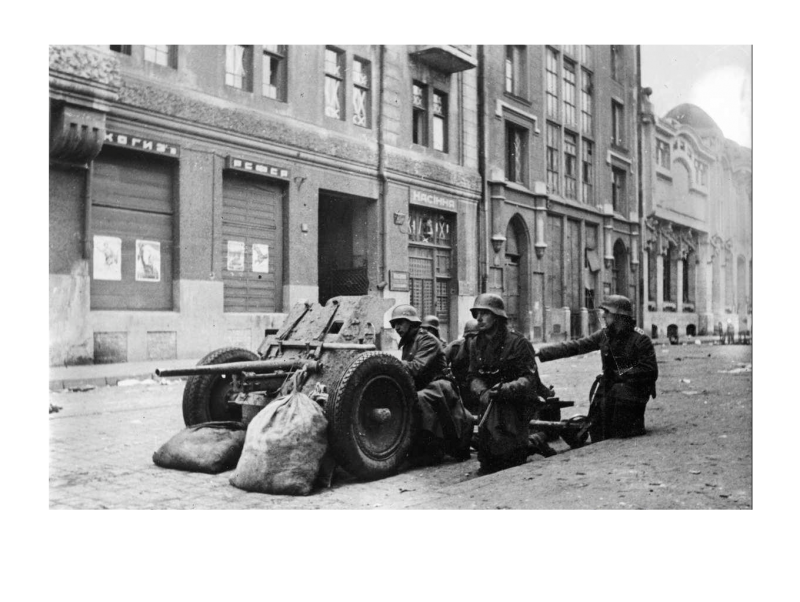 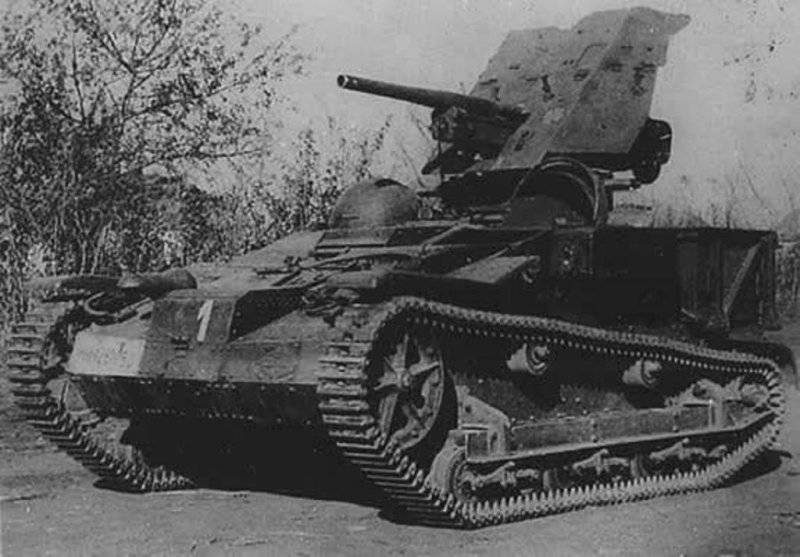 
The gun received baptism of fire in Spain, where it demonstrated high efficiency, and then was successfully used during the Polish campaign against low-armored tankettes and light tanks.

However, it turned out to be ineffective against the new French, British, and especially Soviet tanks with counter-booking. Because of their low efficiency, German soldiers called Pak 35 / 36 a “door knocker” or a “cracker”.


The Wehrmacht used the same 3.7 cm Pak 38 (t) - anti-tank 37-mm gun, produced by the Czech company Skoda. At a distance in 100 m, a sub-caliber projectile had armor penetration along the normal 64 mm. 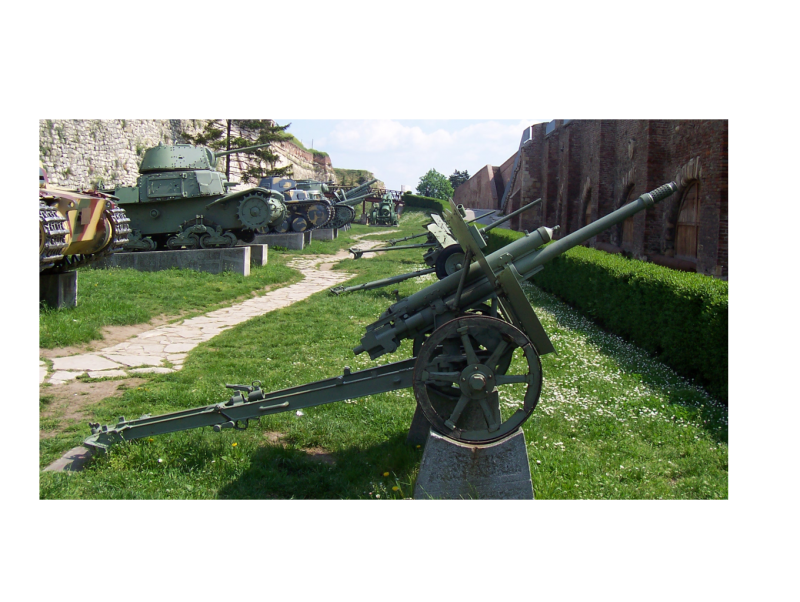 She was generally similar to the Pak 36 anti-tank gun, but had a higher initial speed and armor penetration. 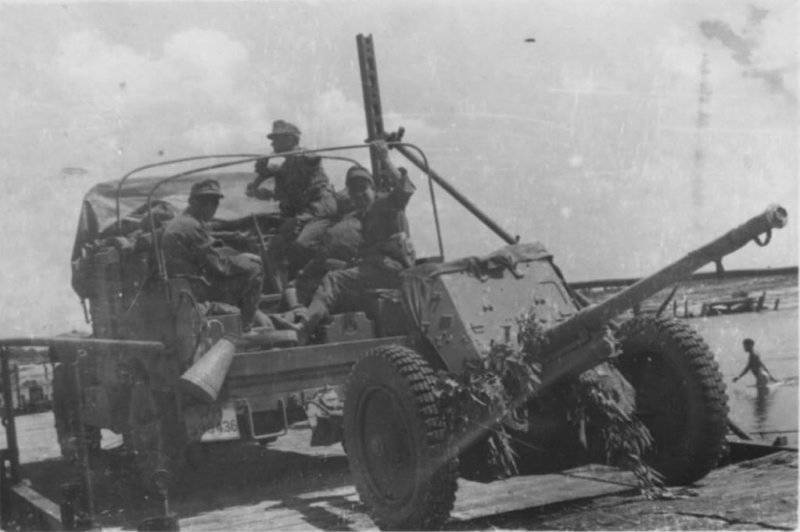 The diameter of the barrel bore varied from 42 mm in the breech to 28 mm in the muzzle. A shell with crushed leading corbels weighing 336 g punched armor 87 mm thick from a distance 500 m at a right angle.

The gun was produced in small quantities in the 1941-1942 year. The reasons for the cessation of production was the shortage of tungsten in deficit in Germany from which the core of the projectile was manufactured, the complexity and high cost of production, as well as the low survivability of the barrel. Total 313 guns were released.

The most effective of captured light anti-tank guns was the 47-mm Czechoslovak cannon obn.1936g., Received by the Germans name 4,7-cm Pak36 (t). 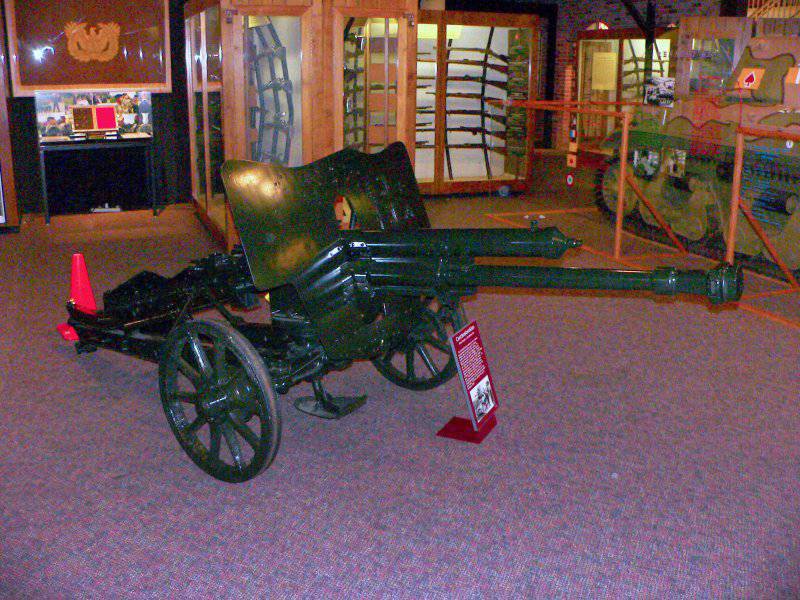 The distinctive feature of the gun was the muzzle brake. Semi-wedge bolt, hydraulic recoil brake, spring cocked. The gun had a somewhat unusual for that time design, for transporting the barrel turned on the 180grd. and fastened to the beds. For a more compact installation could be folded and both the bed. Wheel drive sprung gun, metal wheels with rubber tires.

The piercing projectile had an initial speed of 1080 m / s, an effective firing range of up to 500 meters. Normally at a distance of 500 meters, he punched 55-mm armor.

In the German army, in addition to the Czech, guns seized in other countries were actively used. 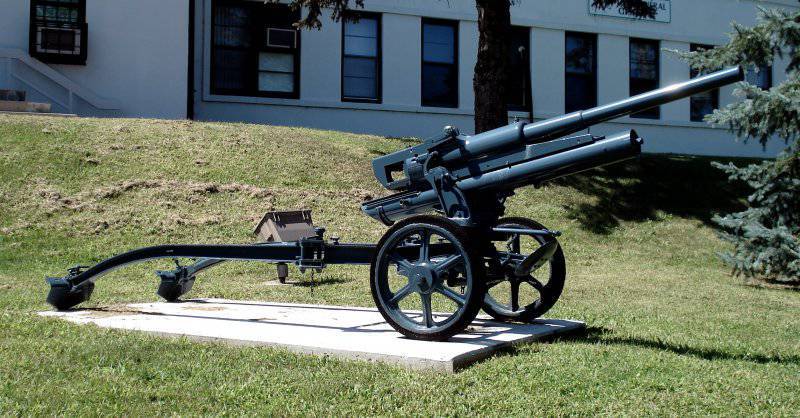 Consisted in the number of 330 units in service with the Austrian army and went to the Germans as a result of the Anschluss. By order of the German army in 1940, 150 units were also released. Entered into the arsenal of anti-tank companies regiments of infantry divisions instead of 50-mm guns. The gun had not very high performance, with the initial speed of an armor-piercing projectile -630 m / s, armor penetration at a distance of 500 m was- 43 mm. 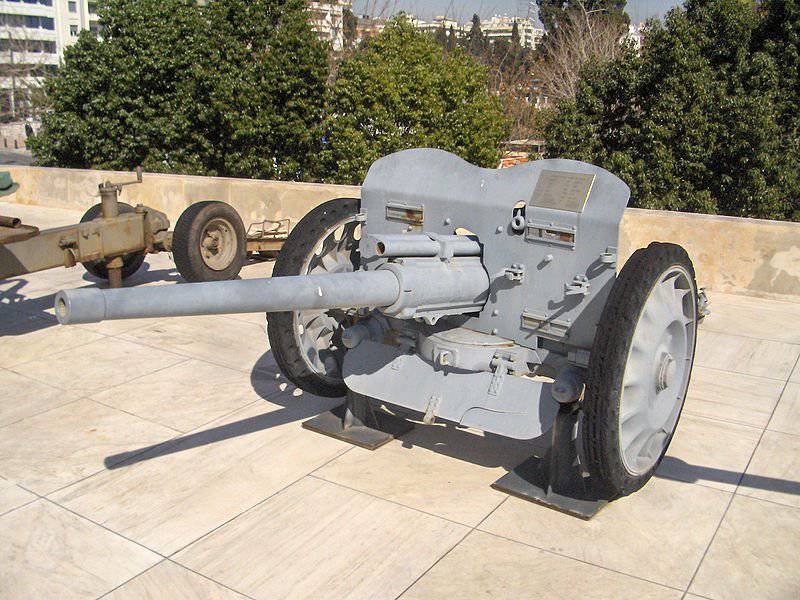 All in all, the Germans used the 823 French 47-mm anti-tank guns.
Barrel gun - monoblock. The shutter is a semi-vertical vertical wedge. The gun had a sprung motion and metal wheels with rubber tires. In the ammunition of the guns sent to the Eastern Front, the Germans introduced German armor-piercing sub-caliber shells of the 40.

The X4.7-cm Pak181 (f) cannon ammunition consisted of a French armor-piercing solid projectile with a ballistic tip; a caliber projectile punched 400 mm armor at a distance of 40 meters normal.

Anti-tank 5 cm Pak 38 was created by Rheinmetall in 1938 year. However, due to a number of technical and organizational difficulties, the first two guns arrived at the troops only at the beginning of 1940. Mass production began only at the end of 1940. Total produced 9568 guns. 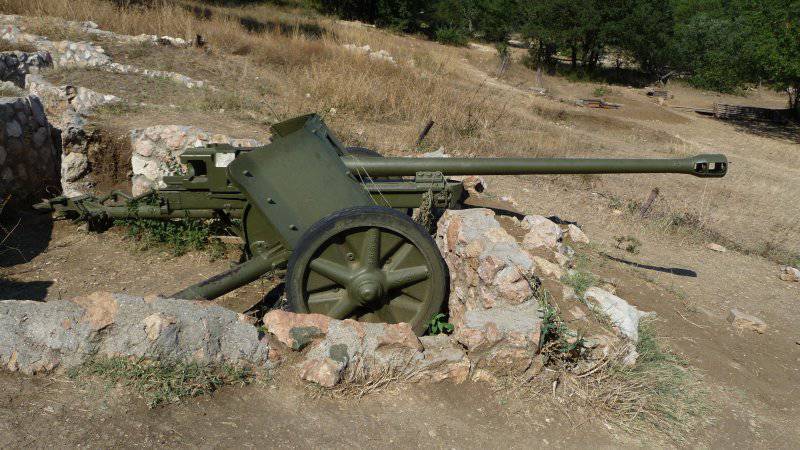 50-mm anti-tank guns, together with the 37-mm guns were part of the anti-tank company infantry regiments. An armor-piercing projectile with an initial speed of 823 m / s, at a distance of 500 meters, pierced 70 mm armor at right angles, and a sneak punching 100 mm armor at the same distance. These guns could already effectively deal with T-34 and KV, but since 1943, they began to be replaced by more powerful 75-mm guns.

In 1936, Rainmetal began designing an 7,5-cm anti-tank gun, called 7,5 cm Pak 40. However, the Wehrmacht received the first 15 guns only in February of the 1942 g. In the gun ammunition there were both caliber armor-piercing projectiles and sub-caliber and cumulative projectiles. 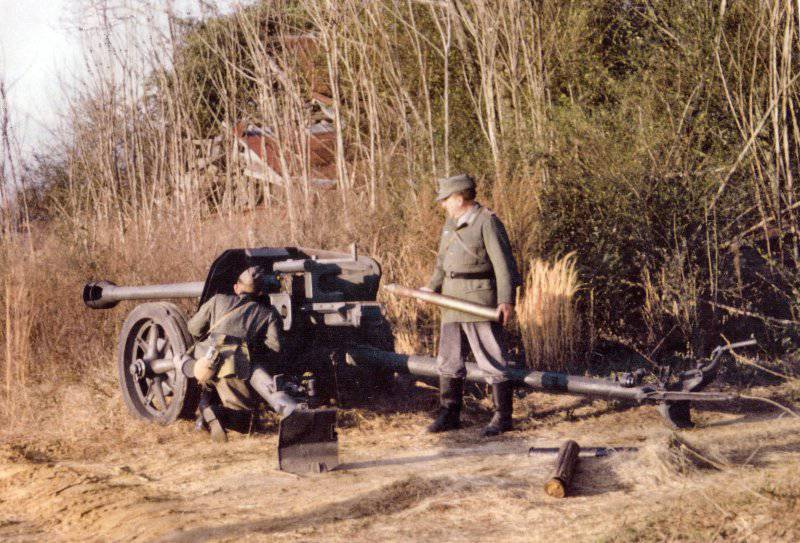 It was a very effective weapon, which was in production until the end of the war, it turned out to be the most numerous. A total of 23 303 guns were produced. 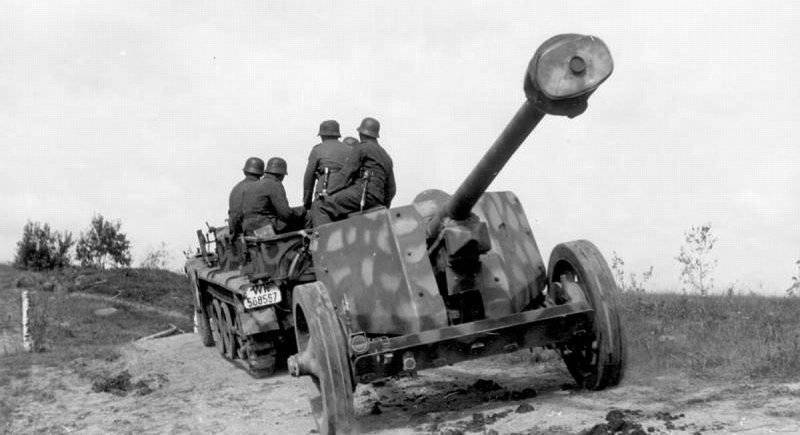 In 1944 An attempt was made to create a lighter 7,5-cm anti-tank gun, called 7,5 cm Pak 50. For its creation, they took the Pak 7,5 40 barrel and shortened it to 16 calibers. Muzzle brake was replaced by a more powerful three-chamber. In the ammunition left all the shells from Pak 40, but the length of the liner and the charge were reduced. As a result, the projectile weighing 6,71 kg had an initial velocity of about 600m / s. Reducing the weight of the barrel and recoil force made it possible to use the carriage from 5 cm Pak 38. However, the weight of the gun did not decrease much and did not justify the deterioration of ballistics and armor penetration. As a result, the release of 7,5 cm Pak 50 was limited to a small series.

During the Polish and French companies, the Germans captured several hundred 75-mm divisional guns. 1897g. The Poles bought these guns in France at the start of the 20s. Only in France, the Germans captured 5,5 millions of shots to these guns. Initially, the Germans used them in their original form, giving the Polish gun the name 7,5 cm FK97 (p)and French - 7,5 cm FK231 (f). These guns were sent to the division of the "second line", as well as in the coastal defense of Norway and France.

Use guns rev. 1897g. to fight with tanks in its original form was not possible because of the small angle of guidance (6 cr.) allowed by the single-sided carpeting. The lack of cushioning did not allow carriage at a speed of more than 10-12 km / h, even on a good highway. However, the German designers found a way out: the swinging part of the 75-mm French cannon arr. 1987 was imposed on the carriage of the German 5-cm anti-tank gun Pak 38. So it turned out anti-tank gun 7,5 cm Pak 97 / 38. 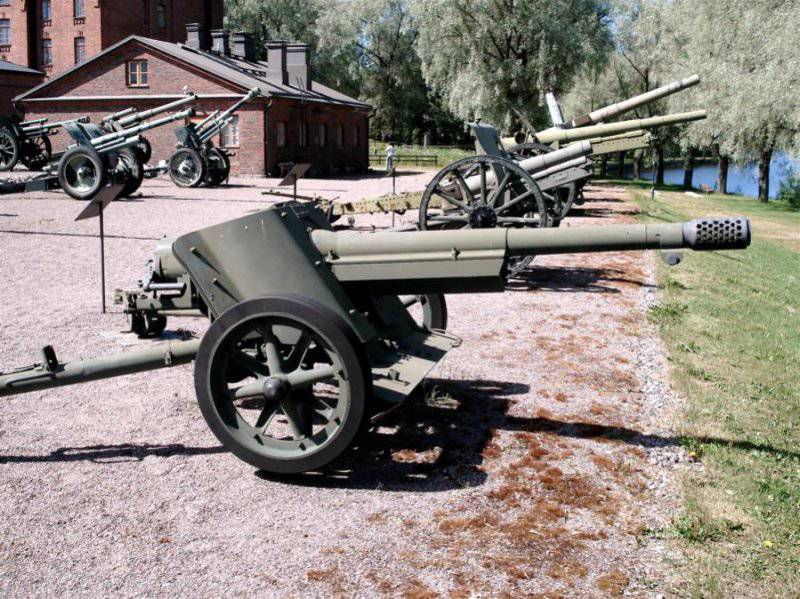 The crane bolt of the gun provided a relatively high rate of fire - up to 14 rounds per minute. The Germans introduced their caliber armor-piercing projectile and three types of cumulative projectiles into the ammunition, the high-explosive fragmentation projectiles used only French.