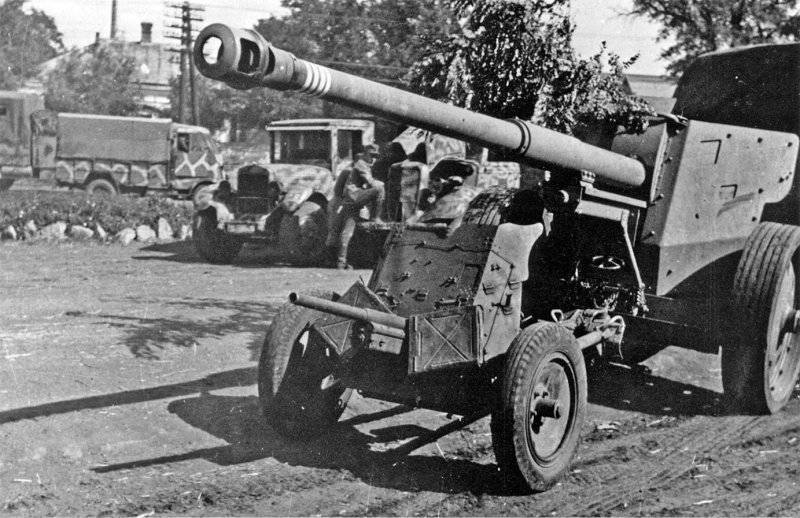 During the first months of the war on the Eastern Front, the Germans captured several hundred Soviet 76-mm divisional guns F-22 (rev.1936). Initially, the Germans used them in their original form as field tools, assigned them the name 7,62 cm FR296 (r).
This gun was originally designed by VG Grabin under a powerful shell with a bottle-shaped sleeve. However, later, at the request of the military, it was remade as a three-round projectile. Thus, the barrel and chamber guns had a large margin of safety. 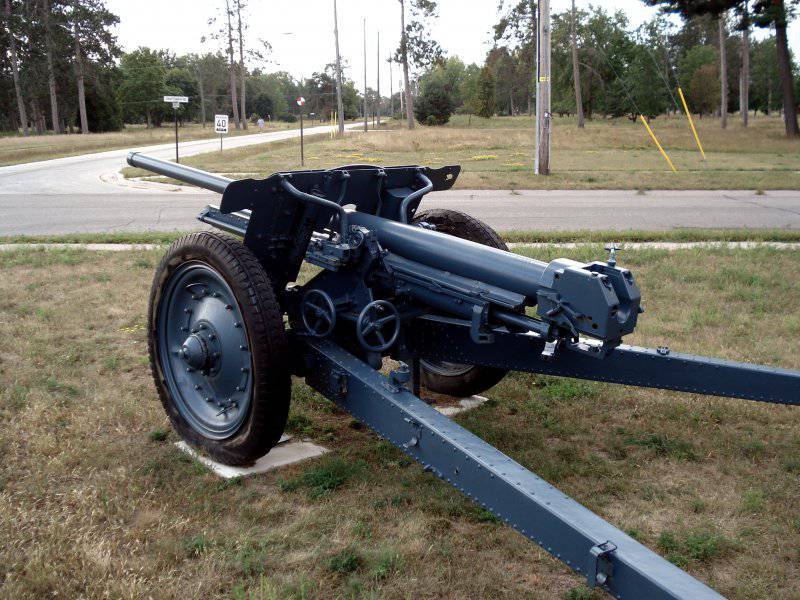 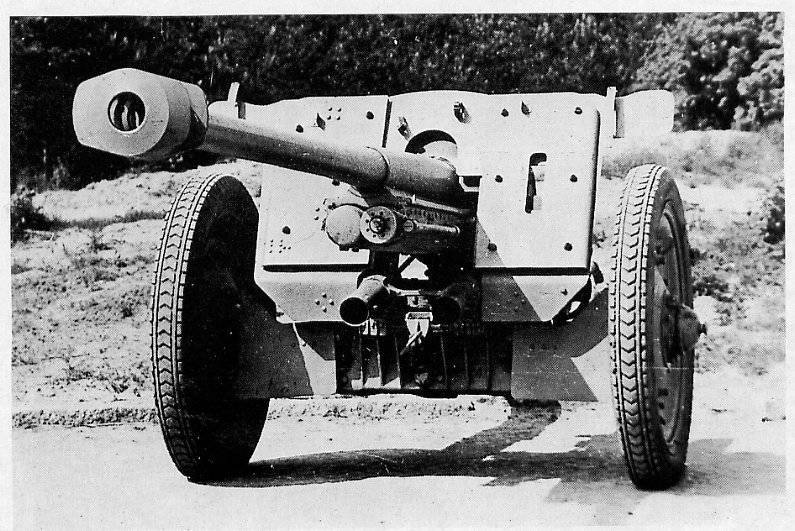 A cannon was squandered in the gun, which made it possible to replace the cartridge case. The Soviet sleeve had a length of 385,3 mm and a flange diameter of 90 mm, the new German sleeve was a long 715 mm with a flange diameter of 100 mm. Due to this, the propellant charge was increased 2,4 times.
To reduce the recoil force, the Germans set the muzzle brake.
In Germany, the angle of elevation 18 hail was limited to quite sufficient for an anti-tank gun. In addition, the recoil devices were modernized, in particular, the variable rollback mechanism was excluded. Controls moved to one side. 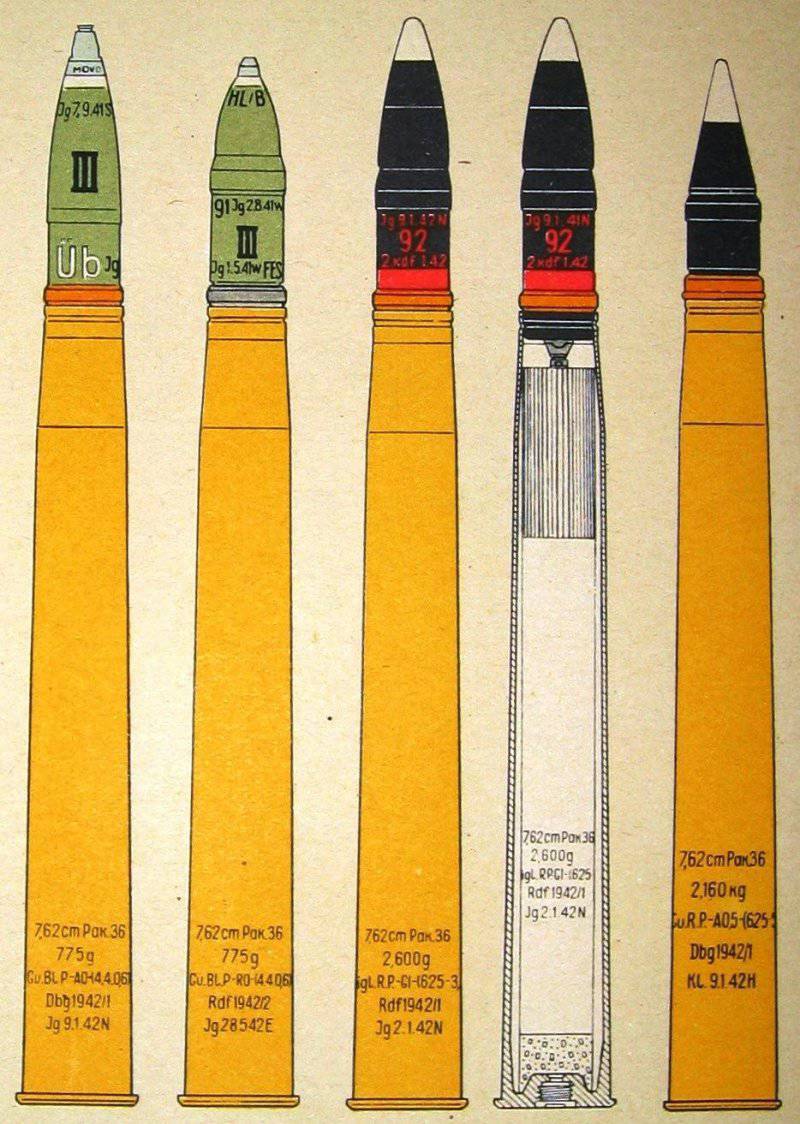 Ammunition 7,62 cm Pak 36 (r) were German shots with high-explosive fragmentation, armor-piercing caliber and cumulative projectiles. Which did not fit the German guns. An armor-piercing projectile, released with an initial speed of 720 m / s, punched at a distance of 1000 meters normal - 82 mm armor. Subcaliber had speed 960 m / s on 100 meters punched - 132 mm.
Redone F-22 with a new ammunition by the beginning of 1942. became the best German anti-tank gun, and, in principle, can be considered the best anti-tank gun in the world. Here is just one example: July 22, 1942 in the battle of El Alamein (Egypt), the calculation of grenadier G. Halm from the 104th grenadier regiment with shots from Pak 36 (r) within nine minutes destroyed nine English tanks. 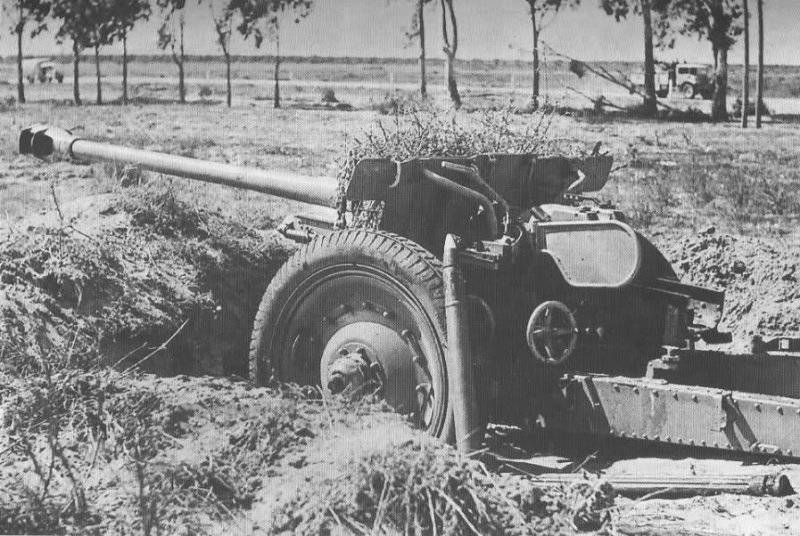 The transformation of a not very successful divisional gun into an excellent anti-tank was not the result of the ingenious thinking of German designers, simply the Germans followed common sense. 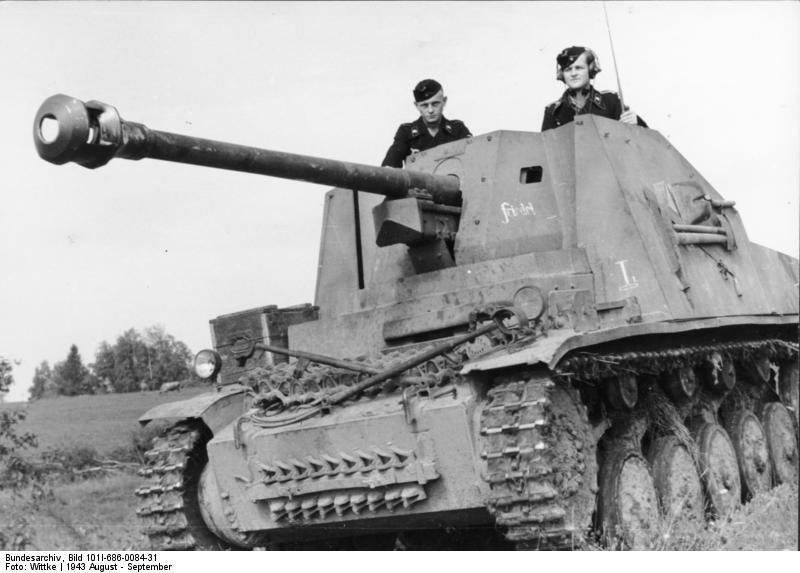 7,5 сm Pak 41 developed by Krupp AG in 1940 year. The gun initially competed (developed in parallel) with 7,5, see PaK 40. Anti-tank gun was originally created as a weapon with a high speed armor-piercing projectile.
When creating shells were used tungsten cores, which increased armor penetration. 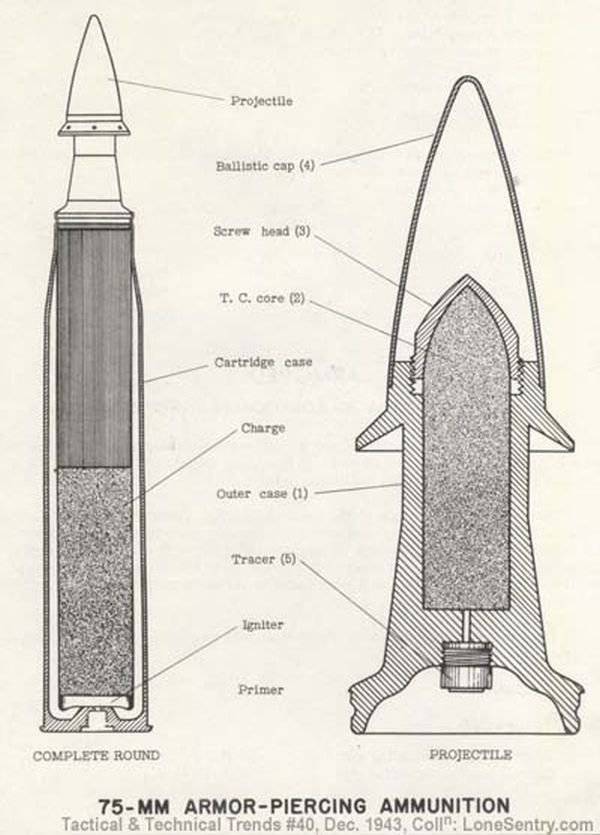 This gun belonged to the guns with a conical bore. Its caliber varied from 75-mm in the breech to 55-mm in the muzzle. The shell was supplied with crushed leading corbels. 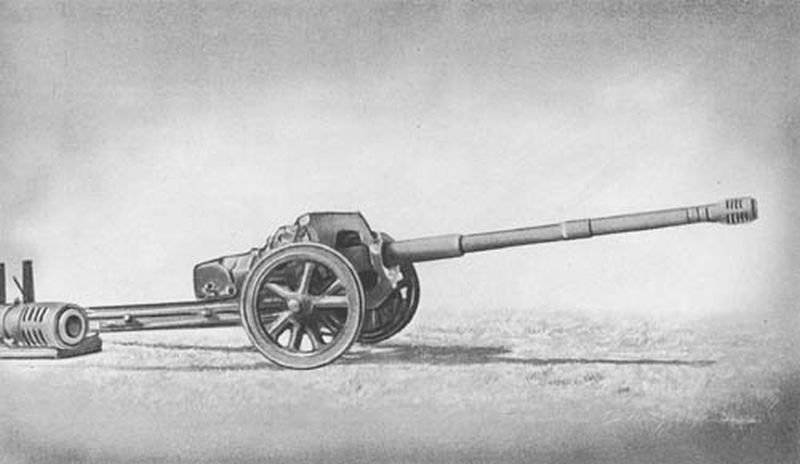 Due to its features, the gun had high rates of effective use - a projectile with a speed of 1200 m / s punched normal 150 mm of homogeneous armor at a distance of 900 meters. Effective range of use - 1,5 km.

Despite strong performance, the 7,5 сm Pak 41 release was discontinued in the 1942 year.
Total manufactured 150 pieces. The reasons for the cessation of production of steel are the complexity of production and the lack of tungsten for projectiles.

Created by Rheinmetall at the very end of the war 8 cm PAW 600 can rightly be called the first smooth-bore anti-tank cannon firing feathered projectiles.

Its highlight was the system of two high and low pressure chambers. The unitary cartridge was attached to a heavy steel partition with small slots, completely covering the hole of the barrel.

When fired inside the liner, fuel was ignited under very high pressure, and the resulting gas penetrated through openings in the septum held in place by one special pin, filling the entire volume before the mine. When the pressure reached 1200kg / cm.kv (115 kPa) in the high-pressure chamber, that is, inside the sleeve, and behind the partition in the low-pressure chamber - 550 kg / cm. square (52kPa), the pin broke, and the projectile flew out of the barrel. In this way, it was possible to solve a previously unsolvable task — to combine a light barrel with a relatively high initial velocity.

Externally, the 8 cm PAW 600 resembled a classic anti-tank gun. The barrel consisted of a monoblock pipe and breech. The shutter is a semi-vertical vertical wedge. The recoil brake and nakatnik were in the cradle under the barrel. The carriage had tubular beds. 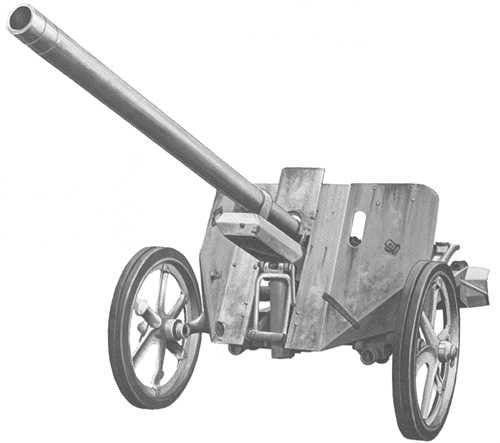 The need for a very powerful anti-tank gun was dictated by the ever-increasing armor protection of tanks of the countries of the anti-Hitler coalition. Another stimulus was the shortage of tungsten, which was then used as a material for the cores of the sabot shells of the 75-mm Pak 40 gun. The construction of a more powerful weapon opened up the possibility of effectively defeating highly armored targets with ordinary steel armor-piercing shells.

The gun demonstrated outstanding armor penetration rates. An armor-piercing projectile with an initial speed of 1000 m / s, at a distance of 1000 meters, at a meeting angle of 60 degrees - pierced 205 mm armor. She easily hit any Allied tank in frontal projection at all reasonable combat distances. The effect of the 9,4 kg high-explosive fragmentation projectile proved to be very effective.

At the same time, a gun with a combat mass of about 4500 kg was bulky and less maneuverable, for its transportation special tracked tractor were required. This greatly leveled its combat value. 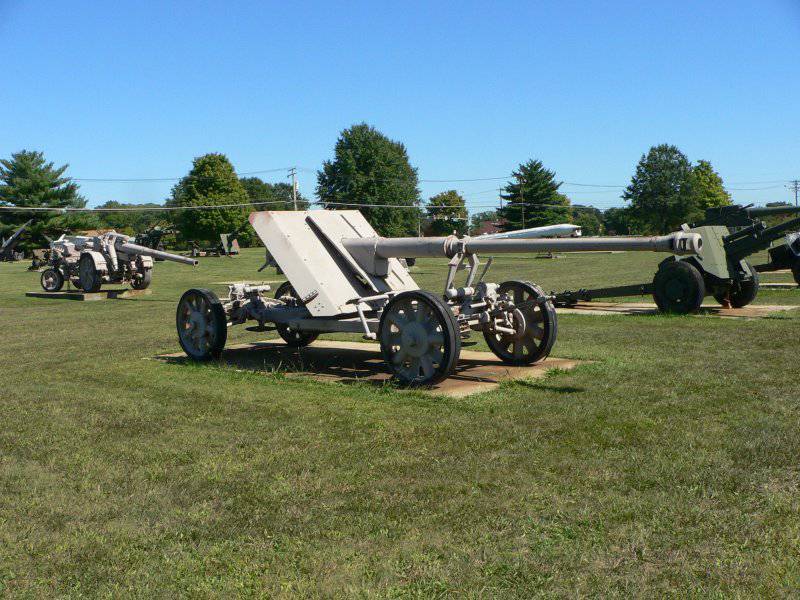 Initially, the Pak 43 was mounted on a specialized gun carriage inherited from an anti-aircraft gun. Subsequently, in order to simplify the design and reduce the size, its swinging part was mounted on a 105-carriage of a leFH 18 field howitzer, similar in type to the 75-mm gun-gun of a Pak 40 anti-tank gun. This option received the designation Pak 43 / 41. 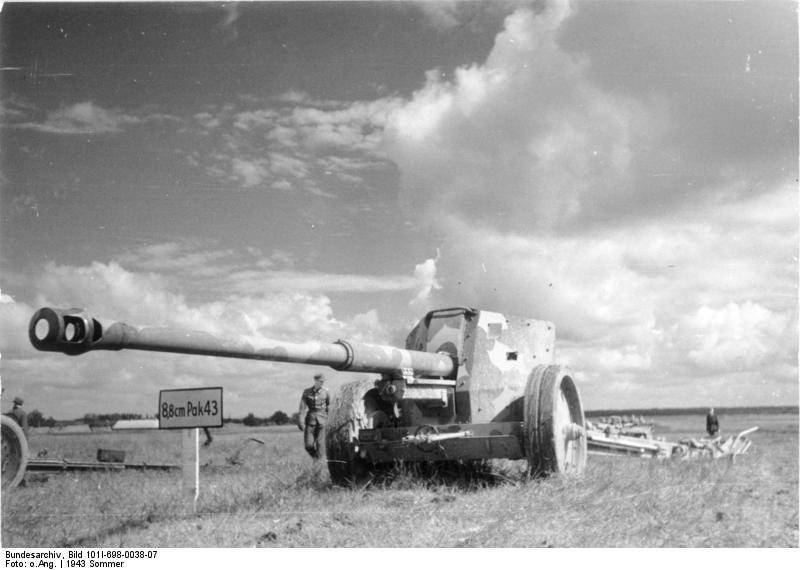 This gun can be called the most famous and effective German anti-tank gun of World War II. 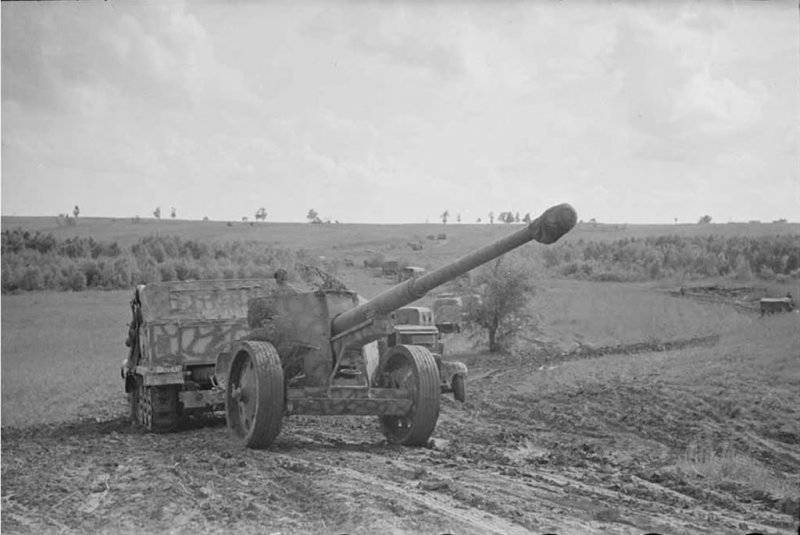 The first to receive this cannon were specialized anti-tank battalions. At the end of 1944, the guns began to enter the artillery corps. Due to the sophisticated production technology and high cost, all 3502 such tools were manufactured.

On the basis of the Pak 43, a KwK 43 tank gun and a self-propelled gun (SAU) gun were developed. StuK 43. These weapons were armed with a heavy tank. PzKpfw VI Ausf B "Tiger II" ("The Royal Tiger"), tank destroyers "Ferdinand" и Jagdpantherlightly armored anti-tank SAU "Nashorn" .

In 1943, Krupp and Rheinmetall, based on the 128-mm flak 40 anti-aircraft guns, jointly developed a heavy-duty anti-tank gun with a barrel length in 55 calibers. The new gun received an index 12,8 сm PaK 44 L / 55. Since it was not possible to mount such a giant barrel on the carriage of a conventional anti-tank gun, Meyland, which specialized in the production of trailers, designed a special three-axle gun carriage with two pairs of wheels in front and one behind. In this case, the high profile of the gun had to be maintained, which made the gun extremely noticeable on the ground. Weight guns in a combat position exceeded 9300 kg.

128-mm anti-tank gun was the most powerful weapon of this class of the Second World War. The armor penetration capability of the gun turned out to be extremely large - according to some estimates, at least until 1948, there was no tank in the world capable of withstanding the hit of its 28-kg projectile.
An armor-piercing projectile with a mass of 28,3 kg, left the barrel at a speed of 920 m / s, provided penetration of 1500 mm of armor at a distance of 187 meters.

Mass production started at the end of 1944 of the year. The gun entered service with the heavy motorized divisions of the RGC, often used as a corps gun. A total of 150 guns were produced.

The low security and mobility of the gun made the Germans work out the option of installing it on a self-propelled chassis. This machine was created in 1944 year on the basis of a heavy tank "Royal Tiger" and was named "Yagdtigr." With the PaK 44 cannon, which has replaced, respectively, the index by StuK 44, it became the most powerful anti-tank self-propelled gun of the Second World War - in particular, evidence was received of the defeat of Sherman tanks from a distance over 3500 meters in frontal projection.

The options for using guns in tanks were also studied. In particular, the famous experimental tank "Maus" was armed with exactly PaK 44 in a duplex with an 75-mm gun (in the tank version the gun was called KwK 44). It was also planned to install a gun on an experienced super-heavy tank E-100.

Despite its very heavy weight and huge dimensions of the 12,8 cm PaK 44 made a great impression on the Soviet command. In the TTZ post-war heavy Soviet tanks stipulated the condition to withstand the shelling of this gun in the frontal projection.
The first tank capable of withstanding shelling from the PaK 44 was the experienced Soviet tank IS-1949 in 7.

Assessing the German anti-tank artillery as a whole, it should be noted that it contains a large number of guns of various types and calibers. That, undoubtedly, complicated the supply of ammunition, repair, maintenance and preparation of the calculations of guns. At the same time, German industry was able to ensure the production of large quantities of guns and shells. During the war, new types of weapons were developed and put into mass production, capable of effectively resisting allied tanks.

The armor of our medium and heavy tanks, which in the first years of the war fully provided reliable protection against German shells, by the summer of 1943 was clearly inadequate. End-to-end defeats became massive. This is due to the increased power of the German anti-tank and tank artillery. German anti-tank and tank guns of caliber 75- 88 mm with the initial speed of an armor-piercing projectile 1000 m / s were breaking through any place of armor protection of our medium and heavy tanks, with the exception of the top front armor of GAN-2.

In all German regulations, memos and instructions on defense issues it is said: "Every defense must be, first of all, anti-tank." Therefore, the defense was built deeply echeloned, densely saturated with active anti-tank weapons and advanced in engineering respect. In order to strengthen active anti-tank weapons and more effective use of them, the Germans attached great importance to the choice of a defensive position. The main requirements in this case was its tank inaccessibility.

The Germans considered the following to be the most advantageous firing ranges for tanks from their anti-tank and tank artillery based on its armor-piercing ability: 250-300 m for 3,7-cm and 5-cm guns; 800-900 m for 7,5-cm guns and 1500 m for 8,8-cm guns. It was considered inexpedient to fire from long distances.

At the beginning of the war, the shelling distance of our tanks, as a rule, did not exceed 300 m. With the advent of 75 and 88 mm guns with an initial speed of an 1000 m / s armor-piercing shell, the tank shelling distance increased significantly.

A few words should be said about the action of small-caliber shells. As mentioned above, all types of 3,7-4,7-cm guns used by the Germans were ineffective when firing at medium T-34 tanks. However, there were cases of defeat 3,7-cm caliber shells of the frontal armor of the towers and the body of the T-34. This was due to the fact that the individual series of T-34 tanks had sub-standard armor. But these exceptions only confirmed the rule.

It should be noted that quite often caliber 3,7-5 caliber shells, as well as sub-caliber shells, after breaking through the armor, did not take the tank out of action light shells lost most of the kinetic energy and could not cause serious damage. Thus, at Stalingrad, on one T-34 tank that was out of action, 4,9 had an average hit of shells. In 1944- 1945 this required 1,5-1,8 hits, since by that time the role of large-caliber anti-tank artillery had increased significantly. 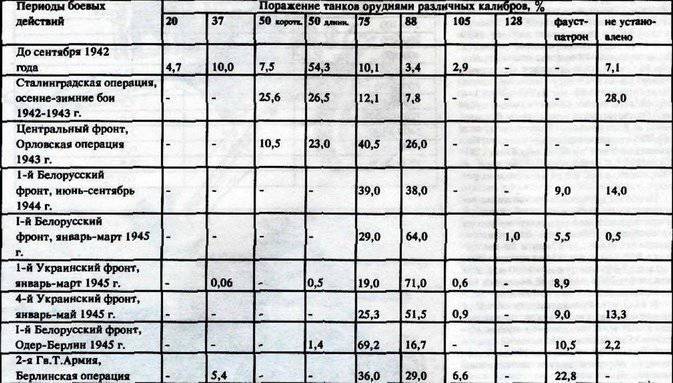 If we abandon leaven patriotism, then it should be said that German anti-tank guns were the most effective during the Second World War and successfully operated on all fronts from Normandy to Stalingrad and from the Kola Peninsula to Libyan sands. The success of the German anti-tank artillery can be explained primarily by successful design solutions for designing projectiles and guns, excellent preparation and stability of their calculations, tactics of using anti-tank guns, the presence of first-class sights, and high reliability and high artillery traction.