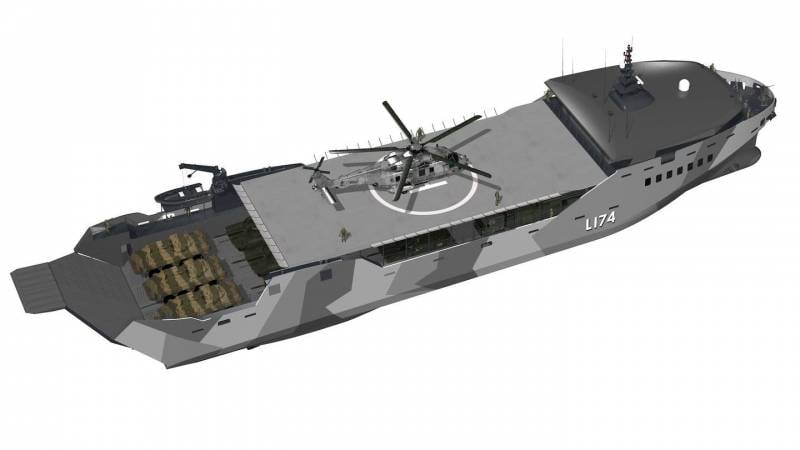 One of the concepts of the ship, according to its performance characteristics of the corresponding LAW and with a look similar to that discussed in the Navy and the Marine Corps

May 5, 2020 NAVSEA, one of the commands of the US Navy, responsible for the creation of warships and their subsystems (Naval Sea System Command, command of naval systems with ten research centers for the combat use of different subsystems, weapons and ships and four shipbuilding enterprises that are part of the so-called Washington Naval Shipyard), held a briefing in which it confirmed that a series of mass, simple and cheap landing ships would be created to conduct landing operations by the U.S. Navy and the Marine Corps. Warships.

As part of the Marine Corps Reform

Such ships are required for their reform of the Marine Corps by its current commander, General Berger (see article "A Step Into the Unknown or Future of American Marines").

The plan of the commander of the American Marines, General Berger, among other things, provides for the dispersal of the US landing forces even at sea, on smaller than the usual DVKD and UDC, ships, which Berger considers it necessary to have in the amount of about 38 units.

And today we can see what these ships will be about. It became known that the US Navy issued requests to potential suppliers of a new type of landing craft, which would be created under the LAW program (Light Amphipious warship, or, in Russian, "Light Amphibious Warship"). True, while we are talking not about 38 ships requested by Berger, but about 28 or 30 units. But for now.

The design of this ship will allow it to be produced in virtually any quantities and anywhere.

Interestingly, the concept of the ship completely coincides with the one that the author at one time considered necessary to develop, though not for the US Navy, but for the Russian Navy.

Article “Attack from the sea. How to return the fleet landing capabilities ", published on November 27, 2018, a new type of medium landing craft (KFOR) was proposed, capable of landing a marine corps with equipment, having a landing ramp in the stern instead of a gate with a ramp in the bow, and an ordinary, “one-piece” stem, optionally - helicopter take-off and landing pad (without hangar) and some weapons.

Such a ship would be able to land second echelons on a cleaned shore or used where resistance is not expected, it would be cheap and massive. At the same time, he would completely surpass the classic BDK in seaworthiness and could move from fleet to the fleet through inland waterways (if necessary). Such a ship would not be a pity to lose: it is small, cheap, and there are few people on it, even compared to the BDK.

Today, a year and a half later, they plan to order a similar ship for themselves by the US Navy and with the same goals. Recall, according to General Berger's plans for reforming the Marine Corps, the task of Marines will be high-intensity combat operations to establish dominance at sea in the interests of the Navy and to advance the enemy landing on unoccupied or weakly protected islands, with the rapid deployment of anti-ship missiles on them and a further offensive.

At the same time, the first wave of landing traditionally for Americans can go through the air and on floating AAV armored personnel carriers, but the second one - on those very middle class cheap landing ships that would fit so well into the structure of the Russian Navy.

And which the American marines of General Berger will now use.

According to the requirements of the US Navy, the ship should have a length of approximately 60 meters and a cargo deck of approximately 740 square meters. His crew should be no more than 40 people, and the minimum number of paratroopers that he must carry for a relatively long time is 75 people.

The ship should be able to be used in waves of up to 5 points, and its navigation equipment and habitability should allow it to operate autonomously, outside the composition of the naval forces, if necessary.

One 13-ton crane is required.

In fairness, it should be noted that the appearance of the ship has not yet been determined, and, possibly, the landing of the landing from the stern will be reviewed. This specific issue is under discussion between the Navy and the Marine Corps. However, the likelihood that the architecture of the ship will be just that is high.

Very curious is the requirement that the life of the ship should be 10 years.

This goes against normal practice when a ship is being built for 20-40 years of service, and it looks as if the Americans are not planning a long service for these ships. And this is a very disturbing fact.

As already mentioned in the article on Berger's reform, the states of the marine corps battalions are currently being reviewed: they will decrease. The composition of the landing group of 75 people can tell how much. As a rule, the military tries not to “split up” units. On the other hand, there will definitely not be more than one company on such a ship. Thus, the minimum composition of the company, which is considered by the Americans, can be 75 people. Such a number "beats" to platoons of 25, and they are to the squads of 8 people plus the platoon commander. True, there are no longer any places for subordinates of the battalion commander, but the number of 75 people is indicated as the smallest possible.

Thus, the battalion "lose weight" due to the possible reduction of mouth. It becomes possible to predict which direction the revision of the battalion states will go.

But all this is a trifle against the backdrop of a 10-year lifetime. The Americans have experience in the mass construction of "disposable" ships. As an example, Liberty cargo ships, which became one of the symbols of World War II, can be cited. Some of them took quite a while, but were mostly written off in the first post-war years. Reason: their design, in principle, did not provide for long-term operation, their task was to live for several years and no more.

Such life requirements were made possible because the Liberty was built specifically for the war.

Now we are witnessing the construction of landing ships “especially for war”, those that are simply meaningless for peacetime conditions.

Those who monitor the mood in American "patriotic" circles know that the idea of ​​a war with China in the near future has already turned into the mainstream there - this is simply not being discussed. War with China in American society seems inevitable.

However, until recently, these were just words, and the words of people "from the people" who do not have real power.

But on May 5, 2020, it became a request for information from the US Navy. And this is a completely different matter.

Both Berger’s plan and this ship, which has been measured out to live only a few years according to the tactical and technical assignment, are a characteristic sign that America is preparing for war. There are already a lot of signs of such preparation today: these are nuclear warheads of reduced power on submarine ballistic missiles, and new fuses for them, which increase the accuracy of target destruction, and preparation for the deployment of medium-range missiles in Europe, and much more. But so far there have been no reconnaissance signs that would have accurately set the time frame for a future great war.

And the beginning of the production of these ships will be able to tell us the time during which the Americans plan to start their next big war.

Author:
Alexander Timokhin
Photos used:
The Drive (www.thedrive.com)
Articles from this series:
"A Step Into the Unknown or Future of American Marines").

Ctrl Enter
Noticed a mistake Highlight text and press. Ctrl + Enter
We are
Light forces of the Navy. Their significance, tasks and ship compositionCoastal Warships: Modern Approach
116 comments
Information
Dear reader, to leave comments on the publication, you must to register.