Turkey Air Defense System. As of 2018, the number of Turkish Ground Forces exceeded 250. Currently, the Turkish army is in the process of reorganization, the purpose of which is to optimize the organizational and staff structure of the ground forces, increase mobility, strike and firepower of formations and units while phasing out the number of personnel, increase tactical and operational controllability by improving the command and control system and weapons. At the same time, motorized infantry and mechanized divisions are transformed into brigades. As part of the motorized infantry division there were: 150-200 combat tanks, up to 300 wheeled and tracked armored vehicles, up to 200 artillery systems, up to 200 anti-tank weapons, up to 120 anti-aircraft weapons. The mechanized brigade of five battalion composition: about 60 main battle tanks, up to 200 armored vehicles, 60-70 guns and mortars, 40-60 anti-tank and 40 anti-aircraft weapons. When moving to a brigade structure, obsolete equipment and weapons are decommissioned or transferred to storage.

The Daxter self-propelled anti-aircraft mount, created on the basis of the M41 Walker Bulldog light tank, was intended to accompany tank units. The tracked vehicle weighing 22,6 tons is covered with bulletproof armor with a thickness of 8-25 mm and is able to reach speeds of up to 70 km / h on the highway. 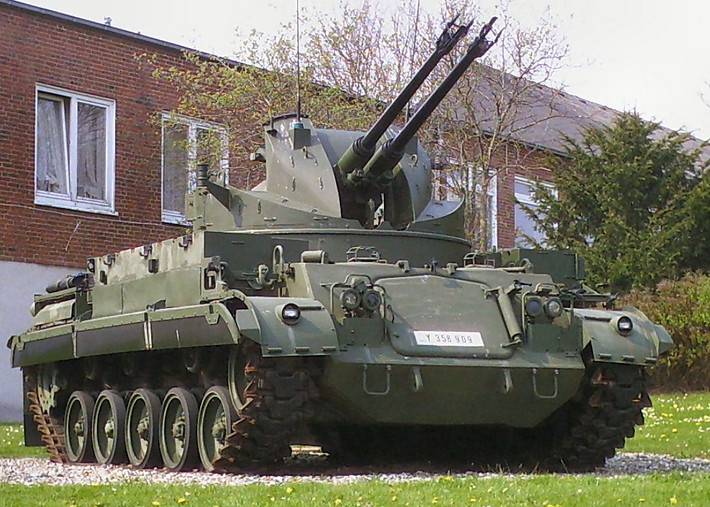 ZSU M41A1 Duster
Z41 M1A1950, built in the mid-40s, armed with two 41-mm cannons with cluster loading, are hopelessly outdated. Given the fact that the input of corrections in range, altitude and speed of the target is carried out manually, and in the ammunition there are no shells with a radio fuse, the probability of hitting targets flying at high subsonic speed is very low. Dakster anti-aircraft installations in modern conditions can be relatively effective against helicopters and unmanned aerial vehicles. As the Turkish ground forces are saturated with modern air defense systems, the Z1 MXNUMXAXNUMX air defense systems will be decommissioned.

Currently, the Turkish Armed Forces are undergoing military tests of the Korkut ZSU, designed by the Turkish company ASELSAN on the basis of the ACV-30 infantry fighting vehicle. The armored body of the machine provides protection in the frontal projection from 14,5 mm armor-piercing bullets. According to FNSS, a combat vehicle is capable of traveling at speeds up to 65 km / h with a range of up to 500 km. Water barriers are overcome by swimming.

The Korkut anti-aircraft self-propelled system includes two types of self-propelled vehicles. Anti-aircraft batteries, which include self-propelled guns equipped with SSA (Silah Sistemi Arac) and KKA control vehicles (Komuta Kontrol Arac), will be required to protect the ground forces on the march and at positions.

Each anti-aircraft battery has four gun ZSU and one control machine with a surveillance radar. The control machine crew is entrusted with monitoring the air situation at a distance of up to 70 km and issuing target designation on the VHF radio network. 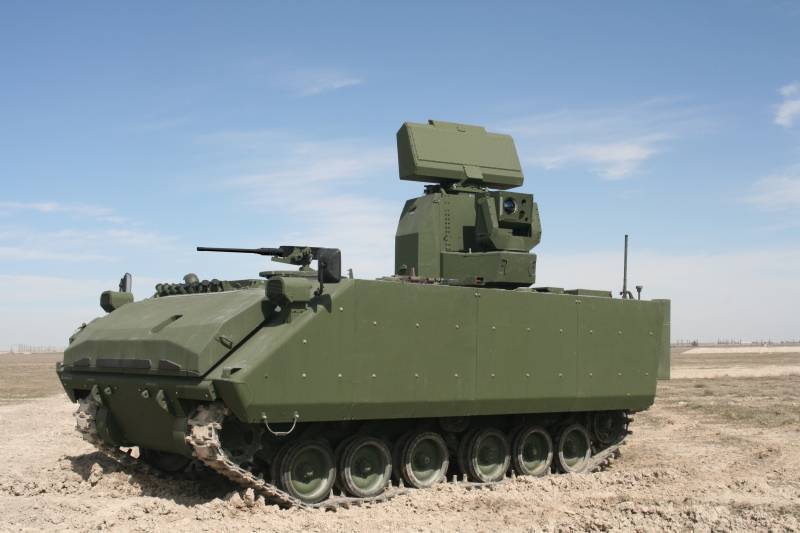 KKA control machine
On the roof of the tower of the combat vehicle there is equipment for searching for targets and guidance, with which the self-propelled anti-aircraft self-propelled crew must independently determine the parameters of the target and provide guidance for firing. 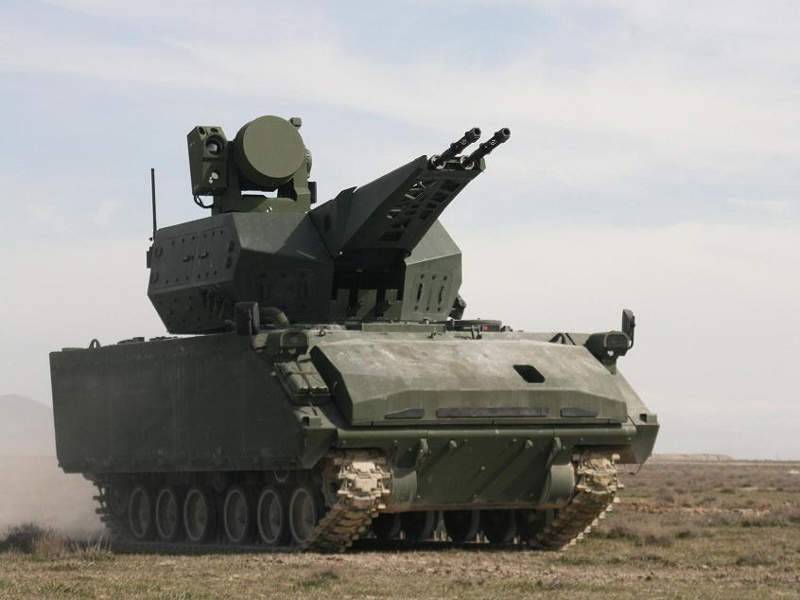 According to the contract concluded in 2016, the ground forces should receive 2024 Korkut SSA machines and 40 Korkut KKA by 13. The first production complexes entered the combat units in 2018. Annually, the industry will supply 5-7 ZSU and 2-3 control cars.

Today in Turkey, in storage and in the army there are up to 600 Bofors L60 / L 70 anti-aircraft guns of 40 mm caliber. During the Second World War, the 40-mm Bofors L60 was one of the best types of anti-aircraft weapons. 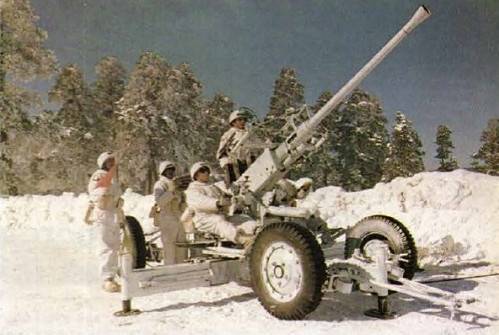 Anti-aircraft gun Bofors L60 with calculation
A further development of the Bofors L60 system was the Bofors L70 anti-aircraft installation, which uses a more powerful 40 × 364R ammunition with a projectile weighing 870 g, which allowed to increase the initial speed to 1030 m / s. In addition, the gun carriage and recoil mechanism were redone. 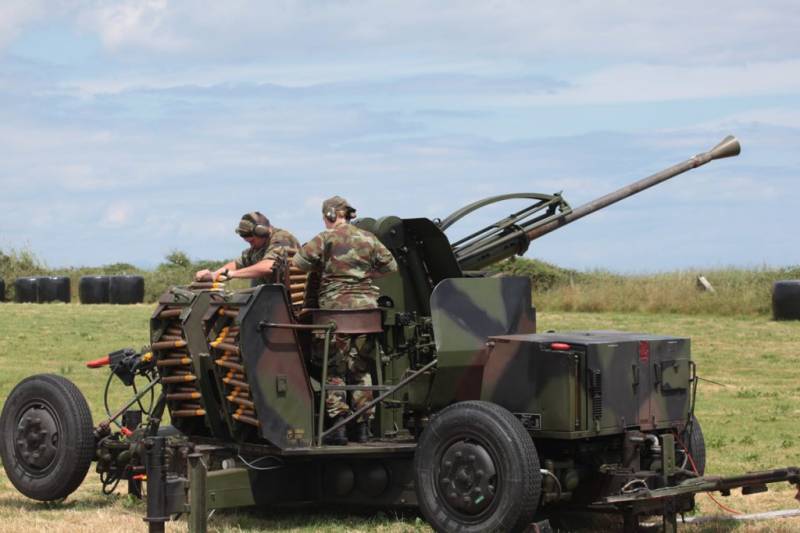 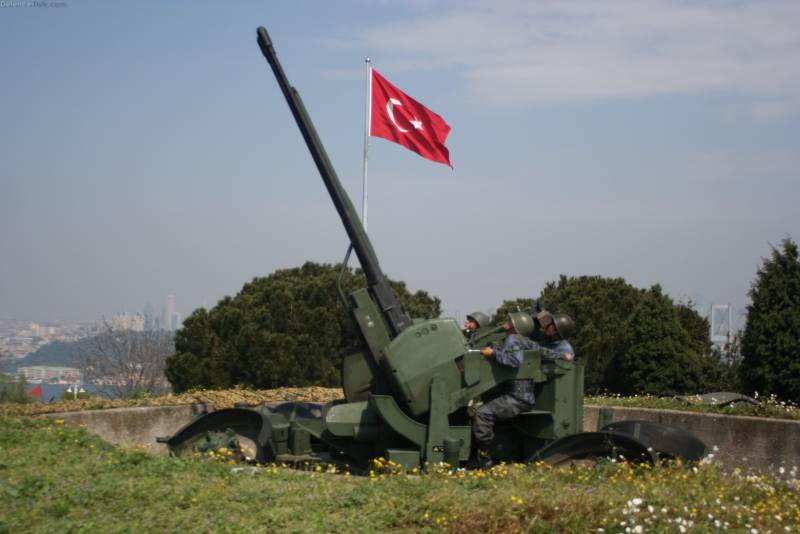 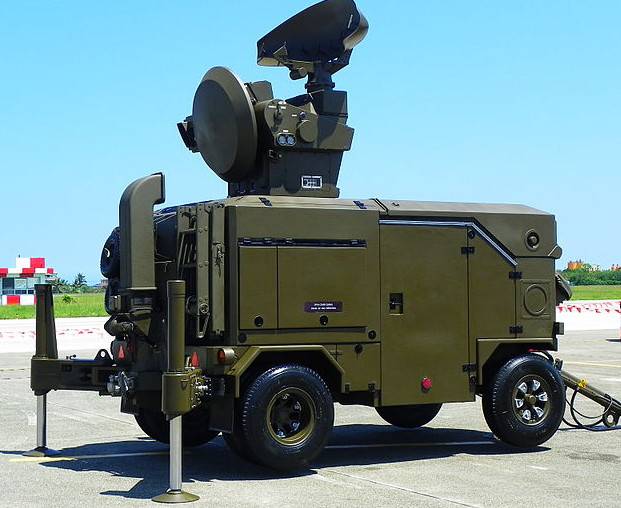 Radar Skyguard
In the 21st century, the 35 mm anti-aircraft guns available in Turkey went through a modernization program to the level of GDF-005. The battery, consisting of four 35-mm pairs, is controlled by the operator from one station via cable lines. At each installation, an individual power generator appeared, which increases the combat stability of the battery as a whole. The ready-to-use ammunition supply for the Oerlikon GDF-001 is 84 rounds. In the modification of the Oerlikon GDF-003, the capacity of the charging boxes has been increased to 124 shots. 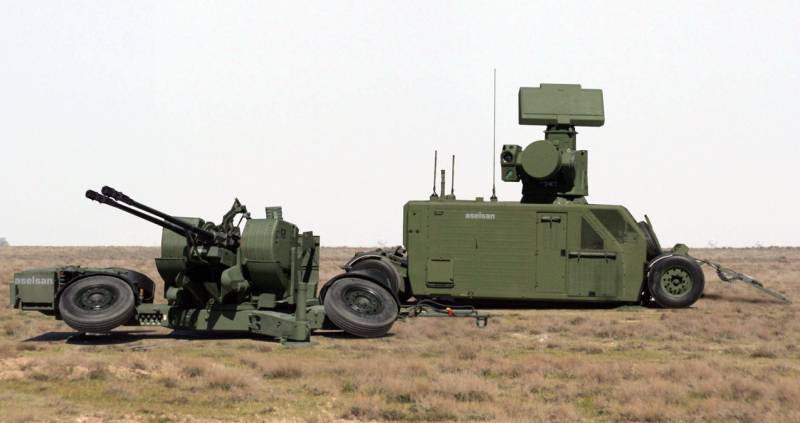 The digital fire control system uses radar and a laser range finder to determine target parameters. In terms of rate of fire and ballistic characteristics, the towed anti-aircraft gun is similar to the 35 mm Oerlikon KDC-02 assault rifles used in the Korkut self-propelled system.

Since the 1950s, the Turkish army has used 12,7 mm Browning M2 machine guns and 12,7 mm four-wheel mounts with an electric M45 Maxson Mount to control low-flying air targets in the Turkish army. 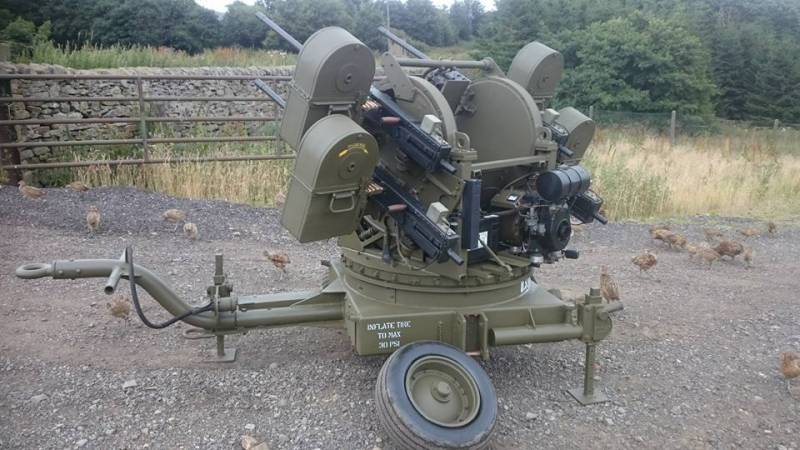 12,7mm Quad MCP Maxson Mount
Although 160 quadruple 12,7 mm rigs are still in storage, it became clear already in the late 1960s that they were ineffective against jet combat aircraft. The military liked the fire density provided by the Z45 M12,7 Maxson Mount. But the installation itself is quite complex and heavy, and the 99 × XNUMX mm cartridge did not provide an acceptable range for firing at air targets.

In this regard, the Turkish company MKEK has launched a licensed production of a 20-mm twin towed anti-aircraft gun Oerlikon GAI-D01 with detachable wheels. The gunner is covered by a shield from the bullets and splinters in front. 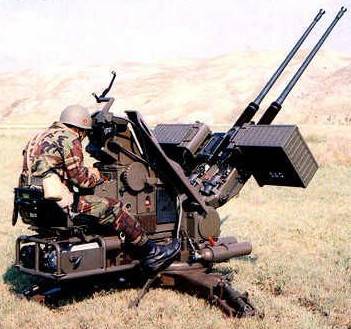 20 mm twin Oerlikon GAI-D01 anti-aircraft gun in combat position
The towed anti-aircraft gun weighs about 1800 kg in the stowed position. To increase the speed of aiming at the target, it is equipped with electric drives, which are powered by a compact gasoline-driven power generator with a capacity of 7 hp. After modernization of the installation, the determination of the range and speed of flight occurs using a computerized ballistic computer. 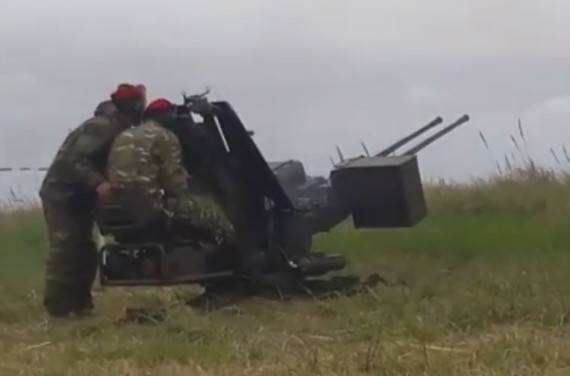 20 mm twin Oerlikon GAI-D01 anti-aircraft mount at the shooting range
The initial velocity of a 20 mm projectile weighing 130 g is 1050 m / s. The firing range for aerial targets is up to 2000 m. The total rate of fire is 2000 rds / min. According to Military Balance 2016, there were 439 Oerlikon GAI-D01 units in the armed forces of the Republic of Turkey. 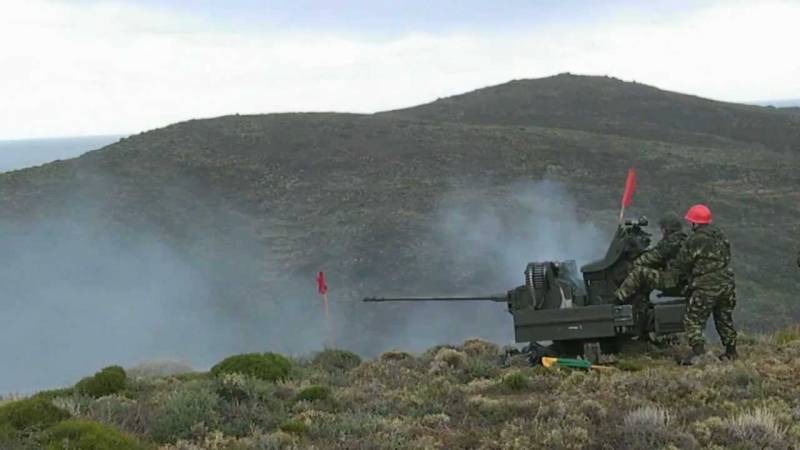 20 mm twin Rheinmetall Mk 20 RH-202 anti-aircraft gun firing at a ground target
The mass of the installation in the combat position is 1630 kg, in the marching position - 2040 kg. Rate of fire - 1100 rds / min. Ballistic performance and effective firing range are similar to the Oerlikon GAI-D01. But this sample is equipped with simple sights and has a lower targeting speed. It is known that in the past, 20-mm anti-aircraft installations were located at checkpoints and were used to provide fire support to infantry units during battles with the Kurds.

After the unification of Germany, a lot of Soviet-made weapons, formerly belonging to the German Democratic Army, were transferred to Turkey. The Turkish army received 40 Igla-1 MANPADS and approximately 300 missiles from anti-aircraft weapons. Unlike MANPADS of the first generation, the Igla-1 complex is capable of hitting high-speed targets both on overtaking and oncoming courses. The operator’s work is simplified thanks to the use of built-in equipment for automatically turning the rocket to a pre-determined point on the initial section of the trajectory. According to advertising data, Igla-1 MANPADS has a maximum firing range of 5000 m, the upper boundary of the affected area is 2500 m. The probability of destruction in the absence of organized interference with a target of the “fighter jet” type flying at a speed of 310 m / s, when fired towards - 0,59 , 260. Chase at a target speed of 0,44 m / s - XNUMX. 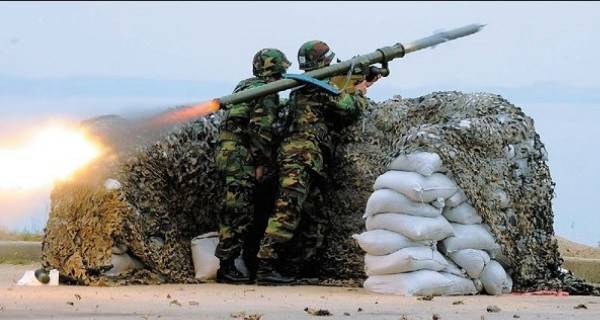 The Turkish military, who previously operated the American FIM-43C Redeye MANPADS, highly appreciated Soviet-made man-portable systems. In the 21st century, Igla-1 MANPADS were supplanted by the American FIM-92 Stinger systems. What happened to the Igla-1 systems removed from service is not known. There is reason to believe that they could be in the hands of militants fighting in Syria against the government army.

In 1995, the replacement of the FIM-43C Redeye MANPADS with the next-generation portable systems FIM-92 Stinger began. The Stinger guided missile with a passive cooled dual-spectrum seeker has much higher noise immunity and is capable of hitting targets at a range of 4500 m, with a maximum reach of 3800 m in height. 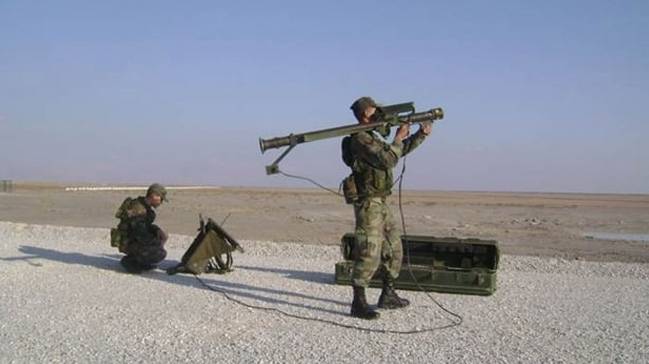 To control the actions of MANPADS calculations and the issuance of preliminary target designation, mobile command posts on the BTR ACV-300APC chassis (Turkish version of the BTR M113) are used, which receive information from the AN / MPQ-64 Sentinel radar. Some of the MANPADS launchers are mounted on machines that reduce the load on the operator and allow them to carry out long-term combat alert positions. 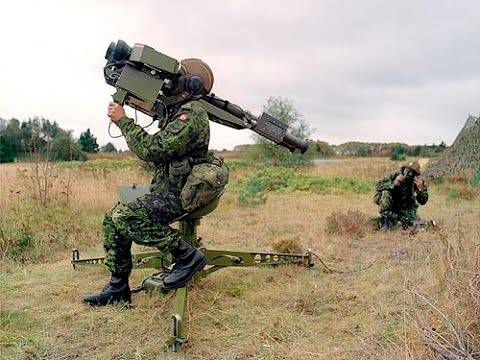 Also, the ground forces of the Republic of Turkey have short-range air defense systems that use FIM-92 SAM systems. Complexes based on the Land Rover army vehicle and the ACV-300APC armored personnel carrier are known as Zıpkın and Atılgan. 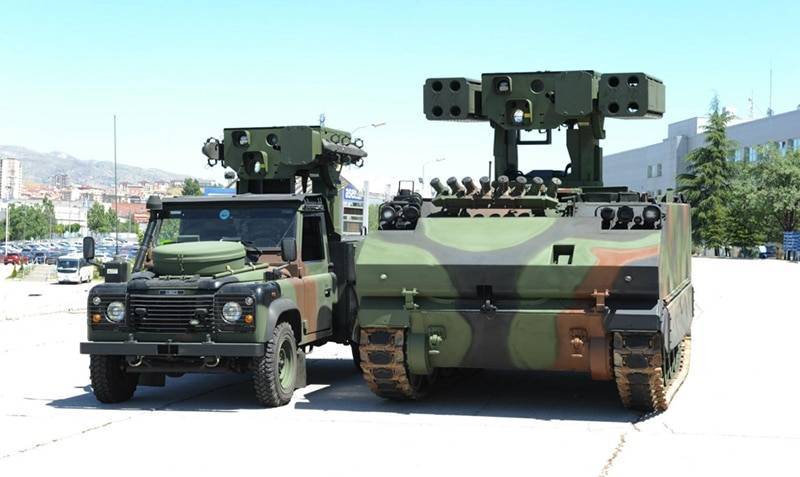 Launchers with an optoelectronic guidance system located on the Land Rover are remotely controlled using an external remote control. Inside the tracked armored personnel carrier there is enough space for equipment and a calculation of three people. The anti-aircraft battery includes three fire engines, a mobile command post with communication equipment, a technical assistance vehicle and an anti-aircraft missile transporter. Three batteries are organized into a division. The division’s command is carried out over the radio network based on information received from the AN / MPQ-64 Sentinel radar.

In the 1990s, Turkey received 148 Stinger launchers and 647 missiles from the United States. Subsequently, the Turkish company ROKETSAN began licensed production of FIM-92 missiles. A number of important components required for the manufacture of MANPADS were supplied from the United States. But due to the aggravated Turkish-American relations, the production of Stingers in Turkey is in danger of stopping. In the past, Ankara was accused of having Turkish-made Stinger MANPADS at the disposal of the Syrian armed opposition.

Author:
Linnik Sergey
Articles from this series:
Turkey's air defense radar: will they ensure the safety of air borders?
Prevent the Soviets from breaking through: Turkish fighter aircraft during the Cold War
Alternatives to replacing the F-35A. Chances of supplying Su-35SK to Turkey
Prevent the Soviets from breaking through: Turkey's air defense systems during the Cold War