So, last time we settled on the fact that "Armory Maxim's company ”began to produce machine guns and widely advertise them at the end of the 1899th century. They did not spare any money on advertising, because everything paid off immediately. Firstly, machine guns themselves were sold, then cartridges for them were sold. Secondly, production licenses were sold, and they were very expensive. And one of the reasons why Hiram Maxim managed to push his machine gun into the market was its excellent survivability and reliability, which is of great importance for mass weapons. It is known, for example, that at the end of 303 one of his machine guns chambered for a British .7,7 caliber cartridge (15 mm) fired 600 thousand shots without any particular difficulties and after that all its parts had no signs of wear. The rate of fire chosen by the inventor turned out to be successful - 250 rounds per minute (with a combat rate of 300-XNUMX rounds per minute), which made it possible to control these weapons without any problems and at an acceptable ammunition consumption. 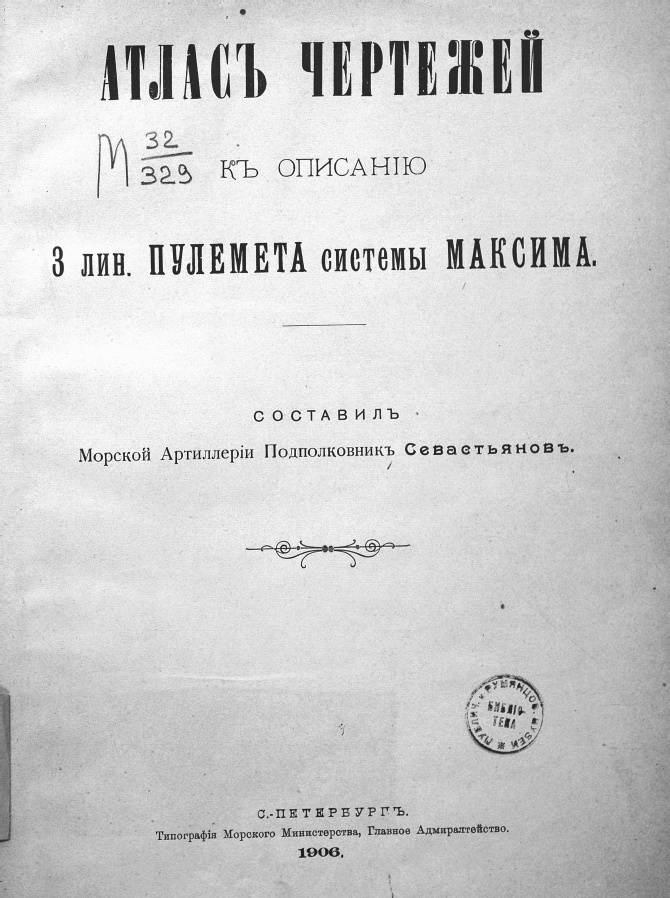 Atlas drawings machine gun "Maxim" published in 1906 year. Let's not talk about its content now. We note only one thing - all the drawings were made in black ink by hand with the help of the router, and then printed.

The successful demonstration of Maxim’s machine gun in Europe ended with Maxim’s visit to Russia, where he arrived with his .45 machinegun (11,43 mm). Then, namely in the 1887 year, in Russia they tested its machine gun under the chambered X-NUMX-mm ammunition from the Berdan rifle, loaded with black powder. 10,67 March 8, a significant event happened: Emperor Alexander III himself fired a machine gun, approving the purchase of his 1888 model machine gun of the year from Maxim 12 for a Berdanov cartridge. 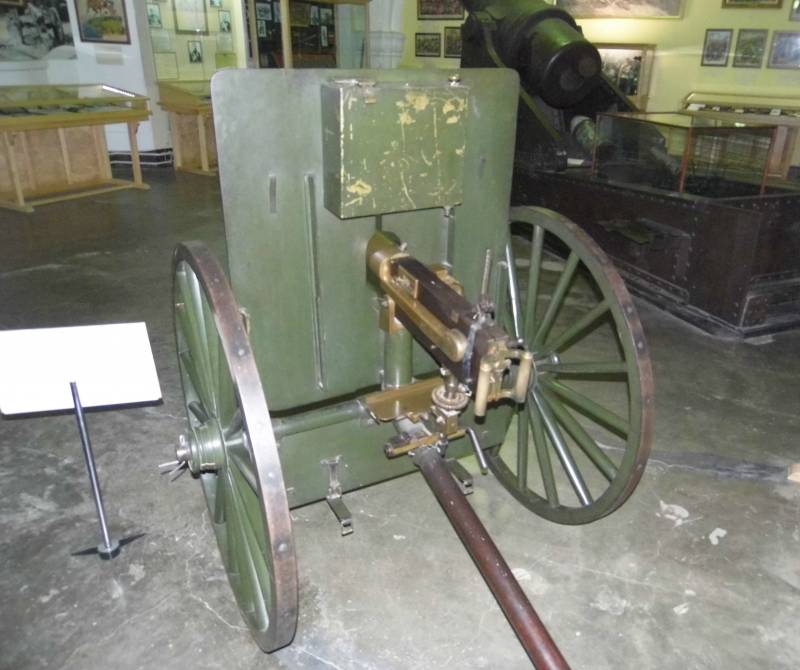 The first Russian machine gun "Maxim" on the "high" machine with an additional tank for water. (Photo by N. Mikhailov) 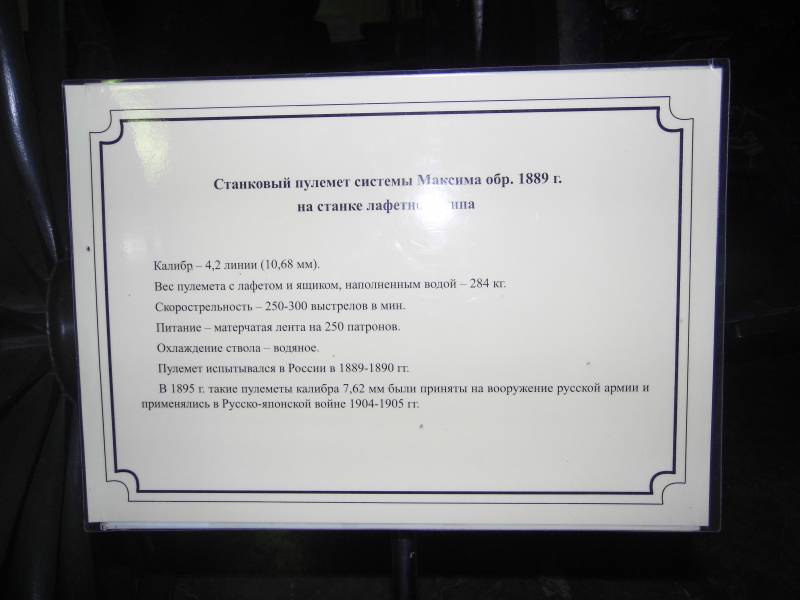 Museum plate under the exhibit. (Photo by N. Mikhailov) 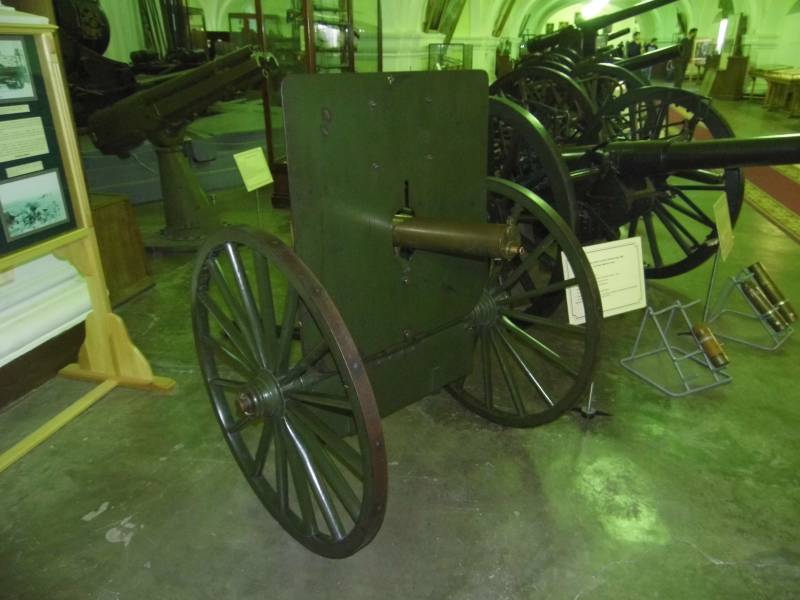 Machine gun in the hall of the Artillery Museum in St. Petersburg. (Photo by N. Mikhailov) 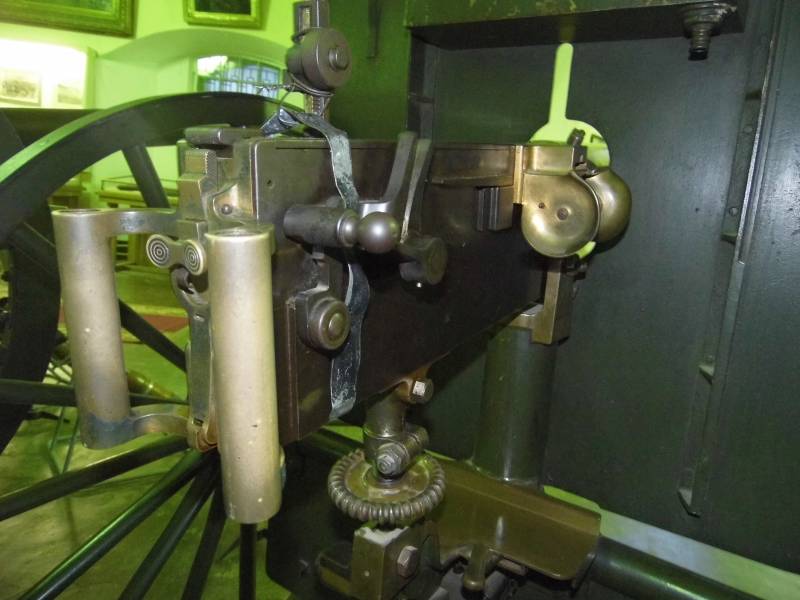 Handles, a trigger, a cocking handle and a tape receiver. (Photo by N. Mikhailov)

The delivery of machine guns to Russia was due to the firm Sons Vikkers and Maxim. The entire order was completed in May 1889. The Russian imperial fleet also showed interest in the new type of weapon, and it hurried to order two more machine guns in addition for testing on ships. 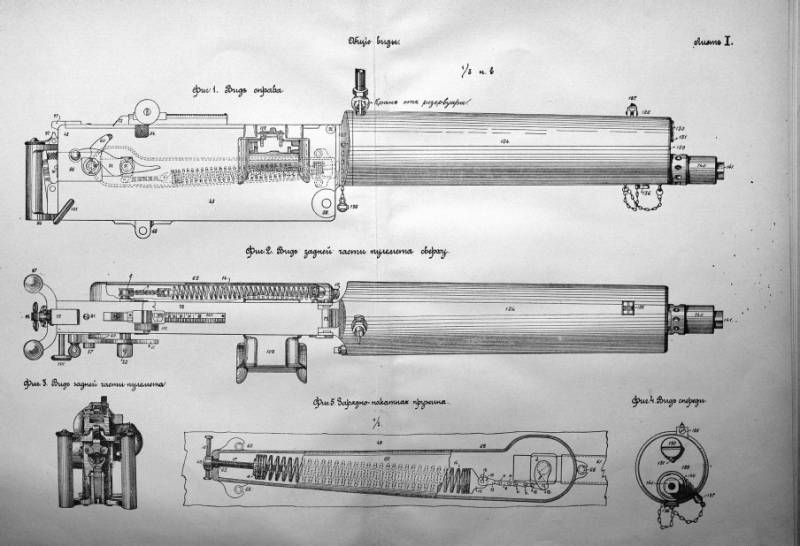 Page from the Atlas of Drawings. General view of the machine gun.

In 1901, Maxim's 7,62-mm machine guns on a high-wheeled English-style carriage and 244 kg weight officially entered service with the Russian Imperial Army, which received the first 40 machine guns in the same year. Machine guns were supposed to be used for the defense of fortresses, where, if necessary, they should be installed in pre-equipped and respectively protected positions.

The deployment of its own factory production of machine guns in Russia began in March of 1904. Then the company “Imperial Tula Arms Plant” received an order for the production of 122 machine guns and 100 thousand rubles for the deployment of their production. It was planned to manufacture the first machine gun on it already by 1 in September of 1904, however, they were only able to assemble it by December 5. But already on December 8, a report was sent from the factory to GAU that the machine gun “all the established tests passed quite satisfactorily”, and that 3000 shots were fired from it, and no delays or breakdowns were observed. But in view of the fact that the plant did not receive special steels from the Vickers company, the steel used for the manufacture of rifles, arr. 1891 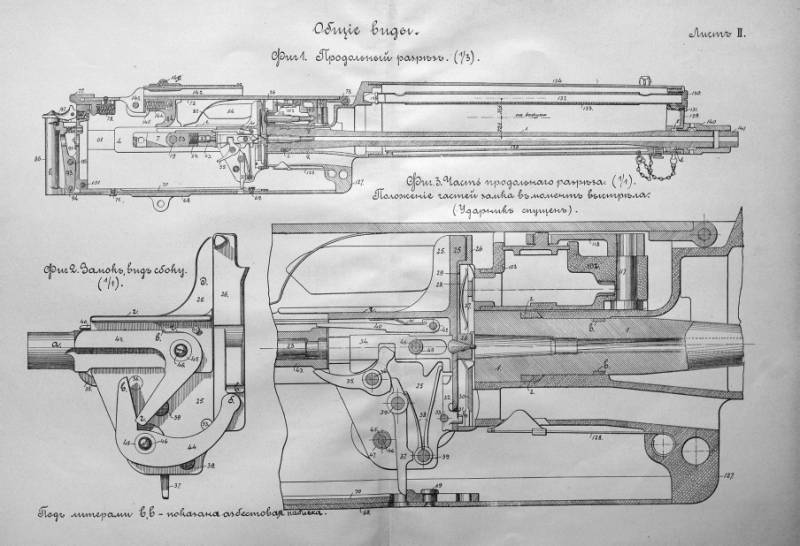 Page from the Atlas of Drawings. Longitudinal cuts machine gun and bolt.

The cost of the domestic machine gun should have been 942 rubles + 80 pounds sterling should have been given to Vickers, that is, approximately 1700 rubles. By that time, this amount was very high, although it still came out cheaper than buying ready-made machine guns from the British at the price of 2288 rubles 20 kopecks for a machine gun. Production began in May, but, as we see, it was developing rather slowly due to the complexity of the technological order. 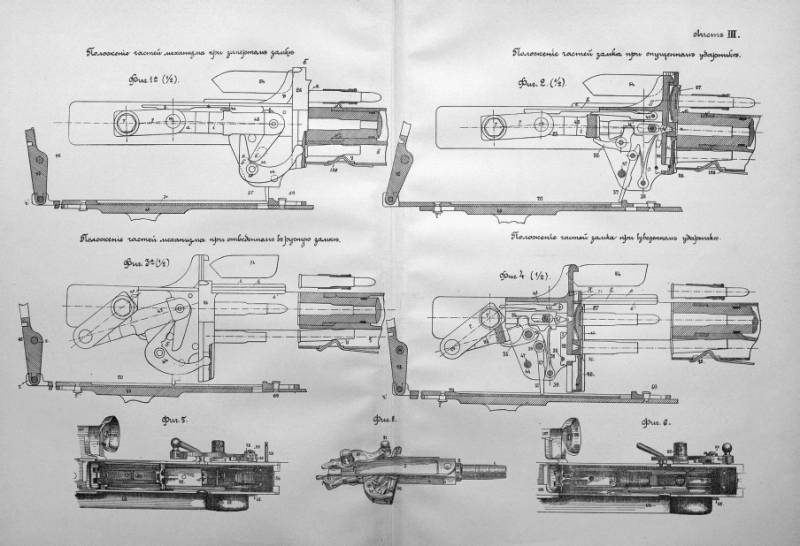 Page from the Atlas of Drawings. Shutter position when shooting.

At the end of December 1905, the company was already ready for the delivery of the 32 machine gun and almost all the parts needed to assemble another 105 machine guns were made. However, for the entire 1905, the Tula Arms Plant was able to hand over only 28 machine guns, of which only 16 came into the army. But the reason was objective. The plant lacked equipment. 700 machines of various types were required, and they could only be obtained from abroad. True 600 machines were obtained, but it did not immediately take time to set up and master them. 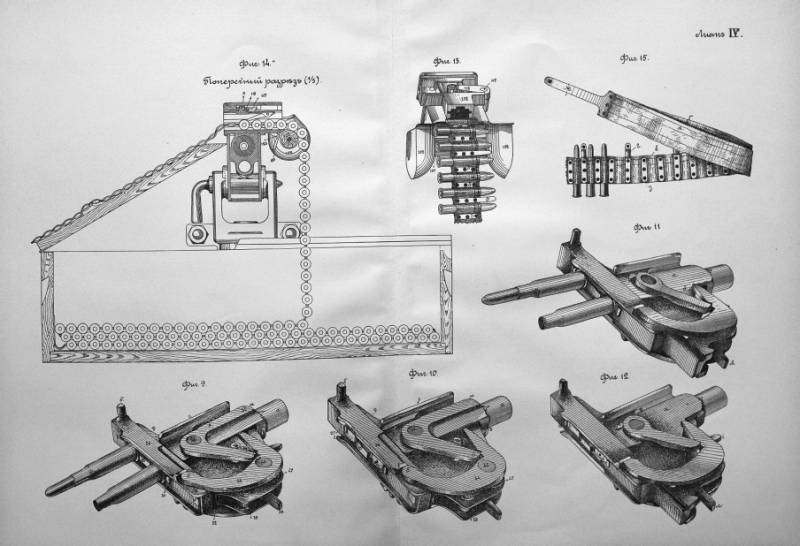 Page from the Atlas of Drawings. The shutter in different forms and machine gun belt.

Another reason was the requirement of complete interchangeability of all parts of the machine gun, which was not fully achieved even at Vickers. The reject rate was also high, so the production with its undoubtedly very high quality was still too small.

Therefore, wanting to speed up the process of saturating the army with a new weapon, the military ministry transferred the following order to the Berlin plant DWM. It should be noted that the production of machine guns wore a sufficiently not only "international", but also "cooperative" nature. So in the documents of the Tula Arms Plant it was noted that 400 machine guns from the Bryansk arsenal should receive 400 wheel pairs, Izhevsk factory 400 large pieces of armored shields, 400 shields of small, and in addition 400 pieces of wheel axles, and 1600 pieces of rough gun shafts. 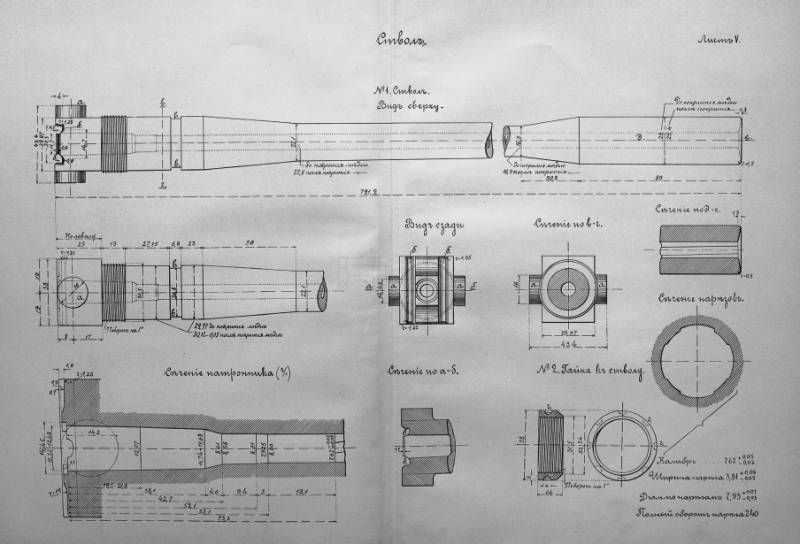 The barrel for the “maxim” was a very difficult part for the technologist, requiring minimum tolerances. Page from the Atlas of Drawings.

Note that the problems with the machine gun arose literally "from scratch", where, seemingly, there could be no problems in principle. For example, it turned out that the English fabric for machine-gun belts is better than the Russian one, because of the poor quality of which, respectively, the domestic ribbons are worse than the English ones and cause delays when firing. 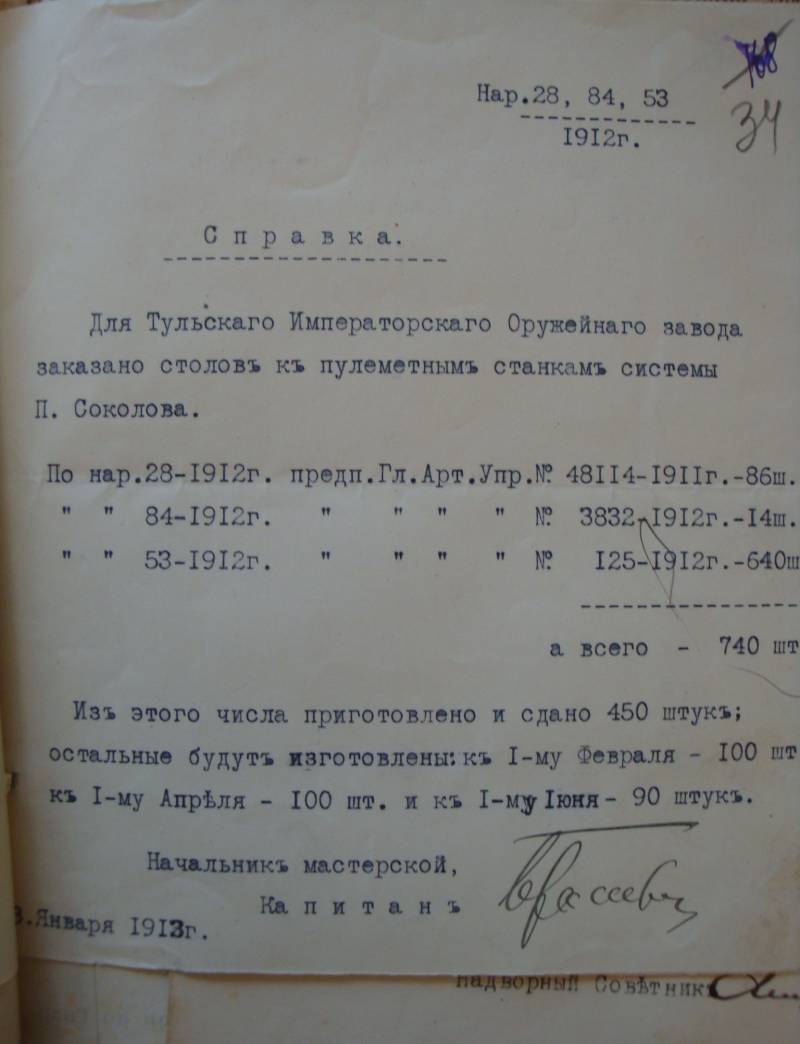 But this is a very interesting document, clearly indicating the production of machine guns already in 1912 year. (Archive of the Museum of Artillery and Communications Forces in St. Petersburg - F. 6. Op. 59. D. 5. L. 34. - Courtesy of N. Mikhailov)

Another problem was bad cartridges. So, in the report of the Chief of the Tula Arms Plant in the State Autonomous Institution of Armenia 16 in July 1907, it was reported that the cartridges of the Petersburg and Lugansk factories give frequent breakthroughs of the caps when shooting, which causes gas to break through the capsule nest. There are cases of bullets falling out of the sleeve. In addition, a specific “nuisance” has arisen, such as the clogging of a machine gun muzzle with shells of bullets. And most often such a defect was found in the cartridges of the Tula cartridge plant. It got to the point that in 1906, they even decided to change the design of the muzzle, offered and produced two new models, but the same thing continued with them. 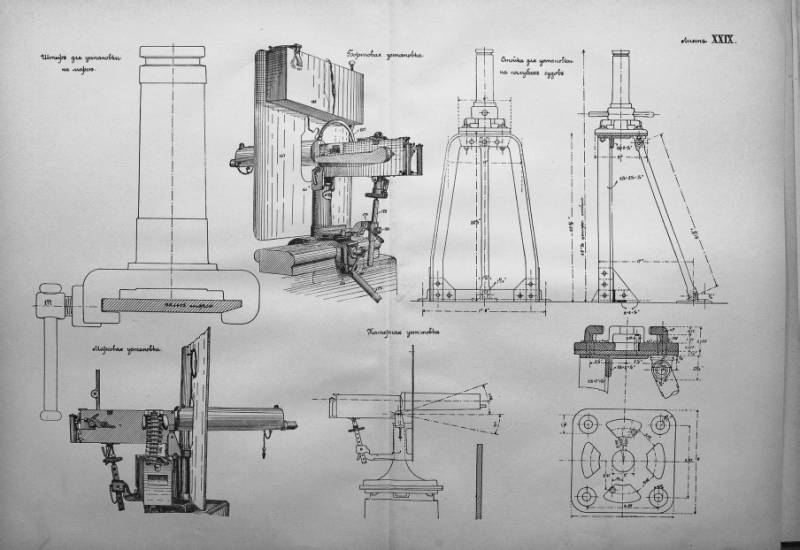 Marine machines for machine guns "Maxim". Page from the Atlas of Drawings. 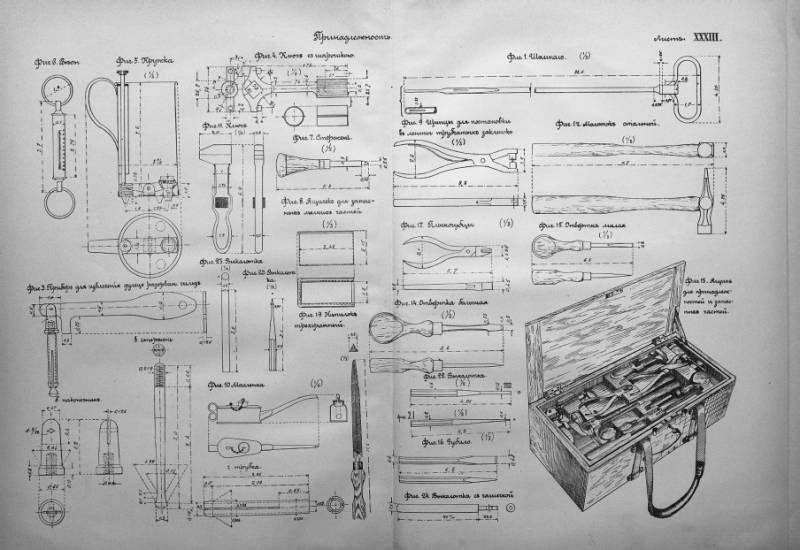 For the successful maintenance of the machine gun required the appropriate tools that also had to make and pack in a special wooden box. Page from the Atlas of Drawings.

Immediately after the end of the Russian-Japanese war, the export began (if you can call it that!) Of Russian machine guns abroad. Then the request to Russia was addressed by the Bulgarian government, who wished to receive a machine gun for informational purposes. And in January 3 1906, by the “highest permission”, was allowed to send one serf machine gun and one pack machine with a reserve of 20 000 cartridges to Bulgaria for free. The Bulgarians liked the machine gun, and they first decided to order in the Ace 144 pack machine guns and 115 serfs, but they thought, and as a result, turned with this order to the German company DWM, and Russia ended up with nothing. 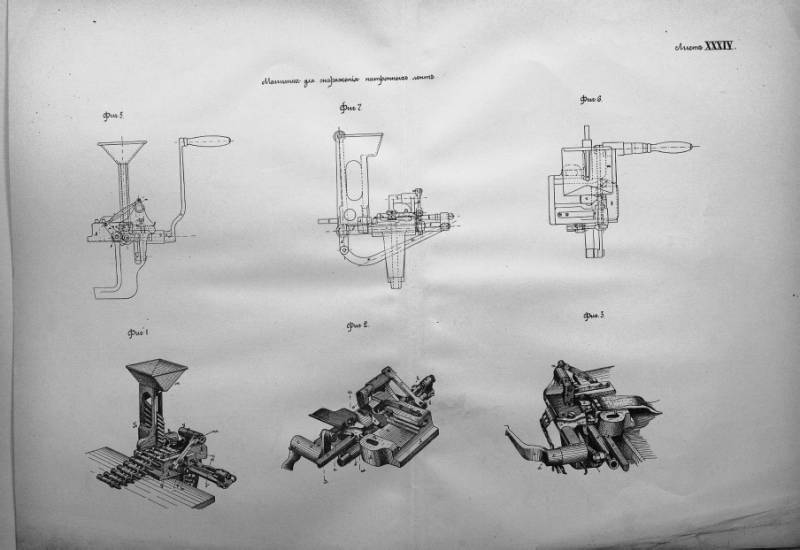 Moreover, each machine-gun unit relied on such a machine for automatic filling of tapes. Page from the Atlas of Drawings. 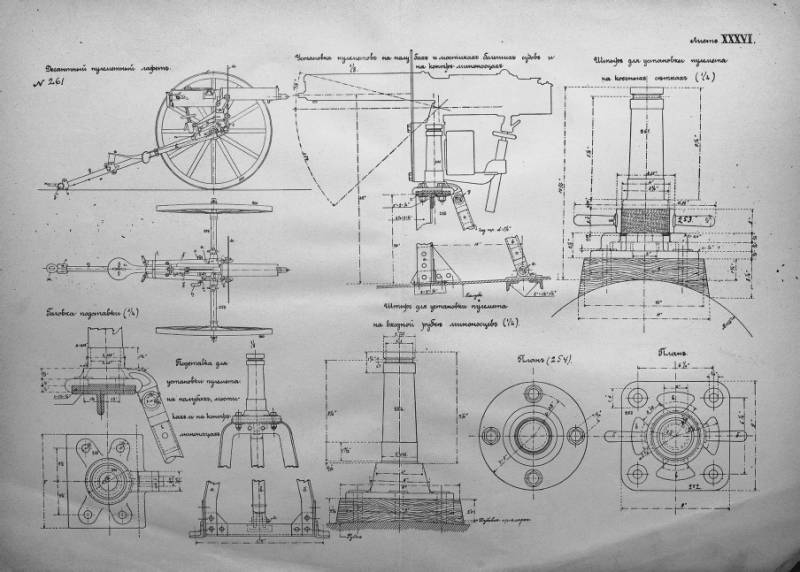 Scheme tumbovy installations for the fleet. Page from the Atlas of Drawings.

Production of machine guns for those years was extremely difficult, for which they needed expensive metalworking machines that were purchased abroad and measuring tools, as well as highly skilled factory workers. For example, such an indicator as the tolerance for the diameter of the bore through the fields of its rifling was in the Maxim machine gun 0,0028, and at the bottom of the rifling barrel was 0,0031 inches. Separate parts of the shutter "rubbed in" to each other with an accuracy of equal precision of the patterns according to which they were made. And if the three-line rifle consisted of 106 parts and required 540 patterns, the Maxim machine gun was assembled from 282 individual parts and required 830 patterns, and its machine - 126 parts and only 234 patterns. For the manufacture of one machine gun "Maxim" it was necessary 2448 operations, 2422 technological transition, working hours 700 hours and loading 40 machines per day. For comparison, we point out that the Mosin rifle needed only 35 hours, while the machine gun - 500, and the machine for it - 170 hours. The barrels were made of low carbon steel with tungsten and manganese impurities. In general, the production of "maxims" sharply increased the demand in the arms industry for high-quality low-carbon and alloyed steels.