The first material about Maxim's machine gun was liked by VO readers, and there were suggestions that the series of articles contained more and more detail about X. Maxim himself, his eventful life, and changes in infantry tactics that followed his adoption into service, and about examples of use, in a word - it is proposed to write a whole book about a man and a machine gun. Honestly, for now it's difficult. But in principle, nothing is impossible. Let's not rush, and gradually, I hope, answers to most questions will be received. Well, for now let the story evolve according to plan, because a well thought-out plan and consistency in work is always half the success. So, we continue ...

Maxim began his experiments with self-loading firearms. weapons from a patent for the use of recoil force in a Winchester rifle, in which automatic reloading was carried out by installing a system of levers on it connected to the plate on the butt plate. His next step was a weapon, which he called the "Forerunner", and which really became the "forerunner" of a new type of weapon.

3 January 1884, Maxim filed a patent on 12 for various developments in the field of automatic firearms. At the same time, Maxim put his workshop in order at Hatton Garden in London, where he built the first model of his machine gun. Already this first prototype contained many creative solutions based both on its own ideas and on the developments of its predecessors. 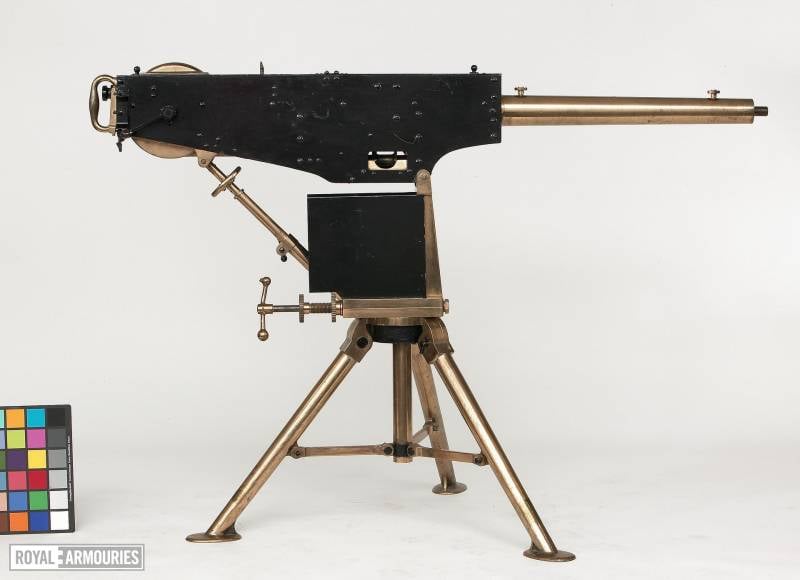 The first prototype machine gun model 1884, from the funds of the Royal Arsenal in Leeds. Pay attention to the massive gearbox and air-cooled barrel. In principle, even then it was quite a workable mechanism, but due to the fact that it used cartridges with black powder, long shooting from it was difficult. The design feature of this machine gun was the hydraulic buffer regulator protected by patent number 3493 from 16 July 1883. The passage of fluid from one part of the cylinder to the other could be adjusted using the lever on the right of the box, and thus change the shutter speed and change the rate of fire. This was a clear complication of the design and subsequently Maxim refused this buffer. Experts of the Royal Arsenal in Leeds believe that this sample is the earliest of the surviving Maxim machine guns and, therefore, the earliest known model of automatic weapons.

If you look at his first machine gun, his relatively short barrel and a very long box catch his eye. In addition, noteworthy is the location of the tape-receiver in it: it is located in the lower part of the box, and not in the upper part, as was later adopted, right at the trunk. The reason - in the constructive solutions incorporated in the first sample. The fact is that in it the cartridges from the tape got into the barrel not immediately from the tape, but through an auxiliary mechanism - a ribbed drum, between the ribs of which the cartridges were placed. Rolling back due to the effect of recoil force, the barrel removed the cartridge from the tape through a system of levers, and it itself was pulled through the receiver. In this case, the cartridge fell into the drum, which in essence was a drive, which also turned. Now the bolt went forward and pushed the cartridge from the drum into the barrel, and the barrel and bolt were fastened with a U-shaped latch. A shot followed, the barrel and bolt rolled back, disengaged, the bolt continued to move, removed the cartridge case, and during the return stroke, a new cartridge from a cranked drum appeared on its way. The smoothness of the work of so many complex mechanisms provided the lever-flywheel, rotated at the rear of the box at 270 degrees and squeezed at the same time the combat spring. 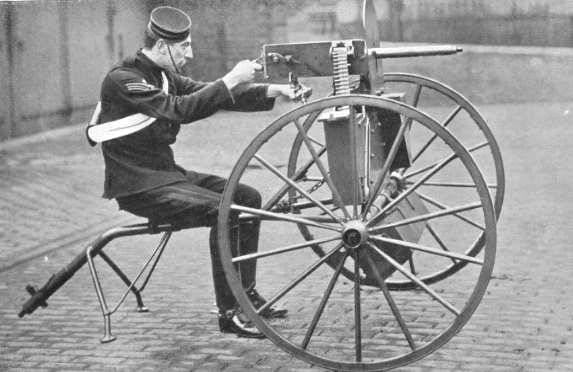 Maxim designed not only a machine gun, but also developed an impressive number of different machines for him, satisfying all the requirements of the then British military.

The very first machine gun had a unique trigger mechanism that made it possible to adjust the rate of fire - from 600 rounds per minute or to shoot 1 or 2. Early experiments also showed that when the flywheel crank rotates continuously in one direction, the system accelerates uncontrollably, so the working version received a crank that rotated approximately 270 degrees with each shot, and then went in the opposite direction. 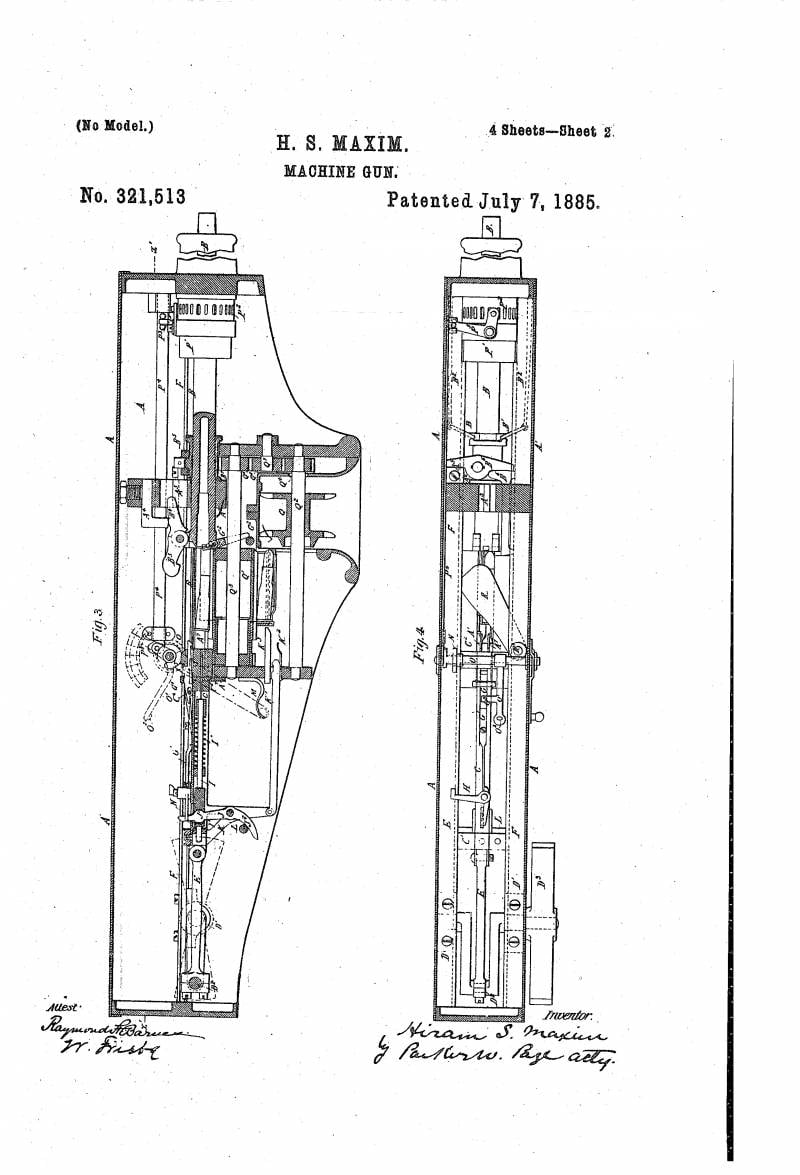 Scheme of the mechanism of the very first Maxim machine gun according to the patent from 7 July 1885. 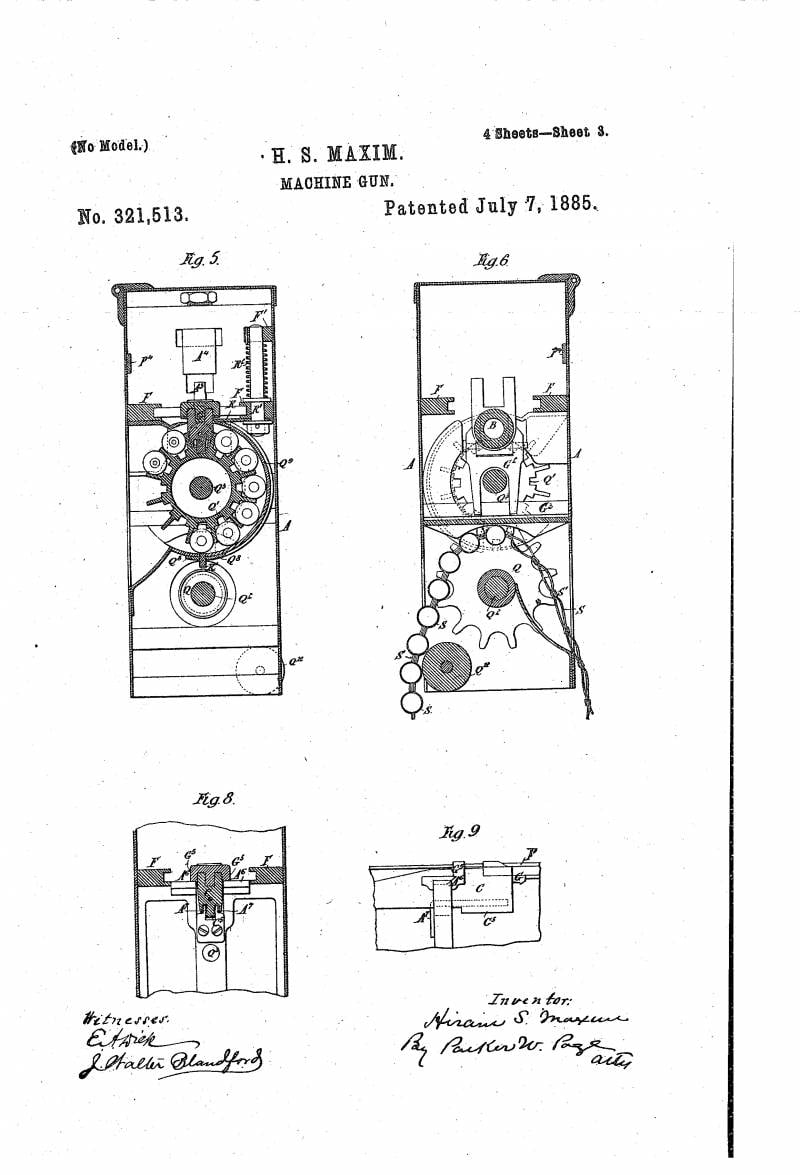 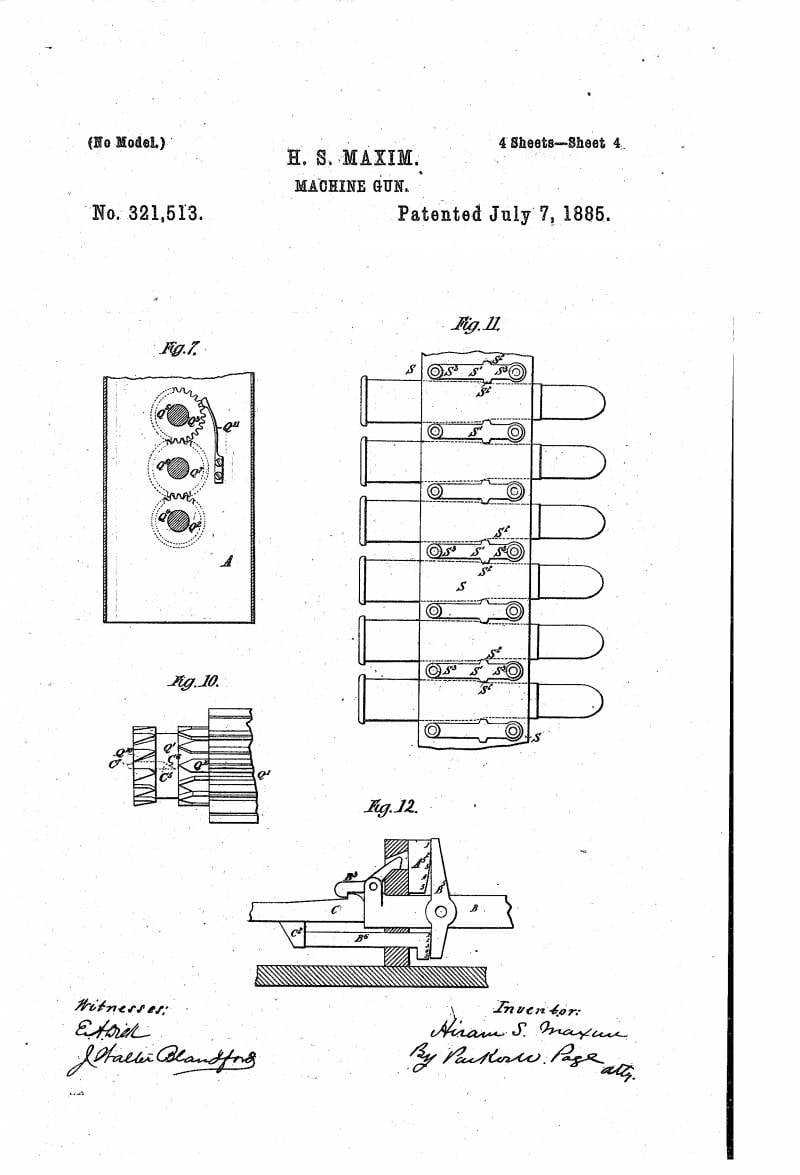 The device of the cloth tape and cylinder-drive cartridges. Patent from 7 July 1885 of the year.

In principle, this crank handle alone would be enough for a machine gun to fire. Twist it and the machine gun will start shooting. That is, the system, in principle, was close to Gatling's mitralese. But the presence of the spring turned the device into an automaton, where the handle had to be cranked only before the first shot, and then everything went by itself.

Subsequent samples of the Maxim machine gun differed from the first by significantly reducing the length of the box and simplifying the design of the mechanism. Maxim was also the first to think about the barrel water cooling. He noted that water is a better means for removing heat than steel (that is, more thermal energy is required to raise the water temperature than to increase the same mass of steel by the same amount of degrees). 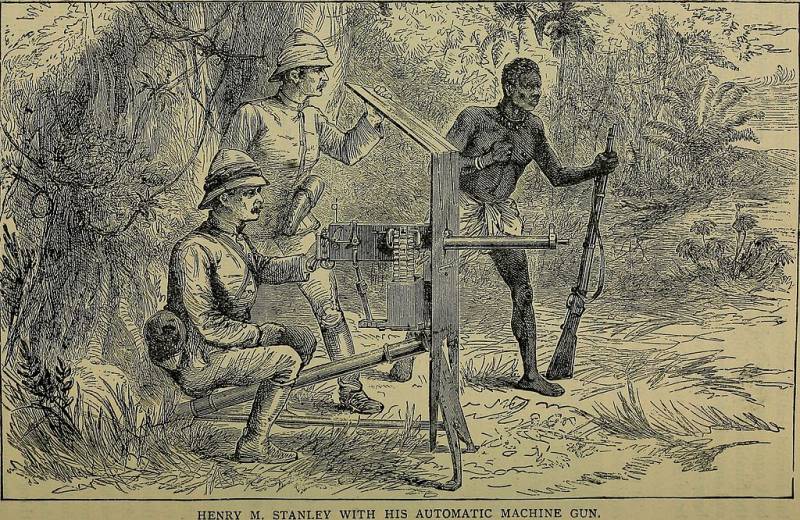 Machine gun Maxim played a crucial role in promoting the British in Africa. Without it, they would never have succeeded in their African expansion. 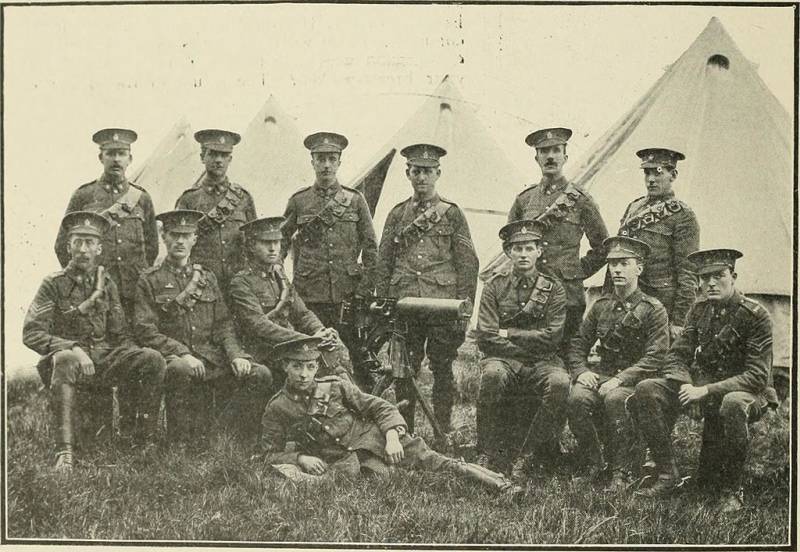 Kitchener Army (1915 g.). Over time, the Maxim machine gun became an integral part of the arsenal of the British army. But he had a special role to play during the First World War.

Well, and then Max made several copies of the prototype machine gun, achieved reliable work from them, and then widely announced his developments in the press, where they immediately began writing about them as sign news in military affairs.

It is worth noting that this machine gun was developed and publicly shown in 1884 year - that is, another year before the invention of smokeless powder. All of Maxim's work on him was fueled by the .45 caliber Gardner-Gatling cartridges, which makes his job of creating a reliable machine gun even more impressive. It was not for nothing that Maxim constantly filed additional patents during this work, created devices that facilitate the work of automation in the conditions of a rapidly forming powder deposit. Naturally, the appearance of cartridges with smokeless powder, although it devalued all these developments, but it was a real gift for him, as for a gunsmith. 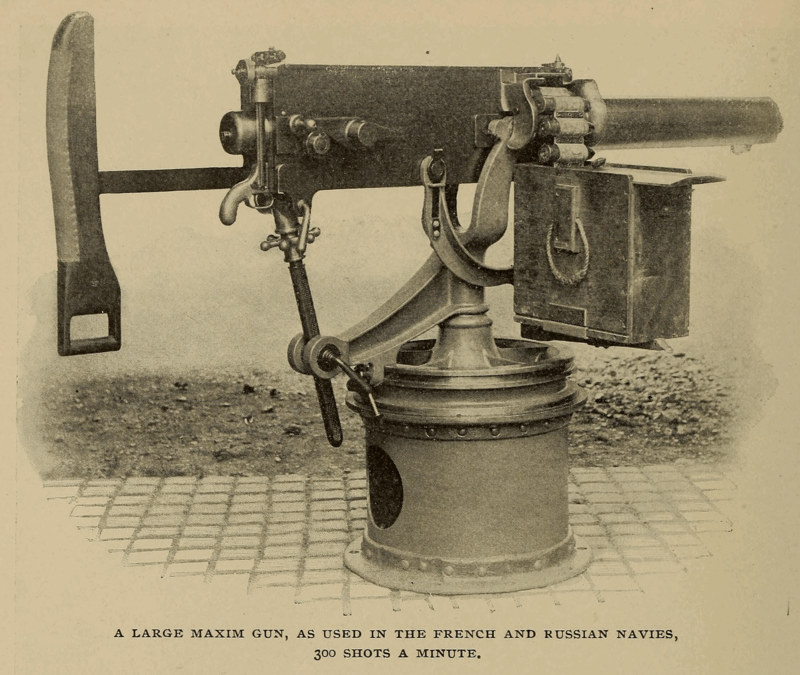 In order to better use the possibility of automatic fire, which is capable of his machine gun, Maxim also developed a delivery mechanism that is more complex than the vertical shops used on Gatling and Gardner mitraliases. In fact, he came up with two filing systems: feeding the cartridges with a tape and feeding them from the drum magazine. The drum was worn on the top of the machine gun box, and was structurally very similar to the drum shop from the Lewis machine gun, which entered service later. Nevertheless, Maxim decided that the tape mechanism was more practical and further improved only him, leaving the development of drum shops. 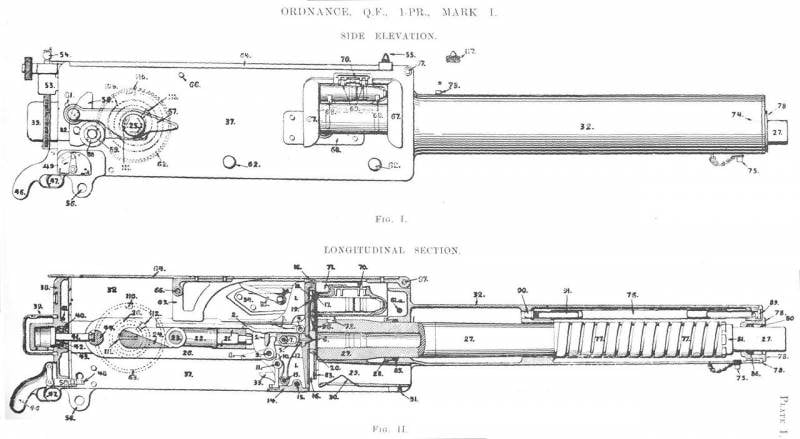 Nothing else but the size (and the oil recoil damper), Maxim's 37-mm submachine gun did not differ from its predecessor machine gun.

During the tests, Maxim shot more than 200 000 cartridges with the help of his prototype machine guns with the minimum number of breakdowns and delays, which at that time was just a fantastic achievement! However, the size of his machine gun and technical complexity did not allow to use it in the armies of the time. And Maxim followed the advice of his friend, Sir Andrew Clarke (Inspector General of Fortifications), and returned to the drawing board, trying to achieve such simplicity of design that his machine gun could be completely disassembled without tools in seconds. 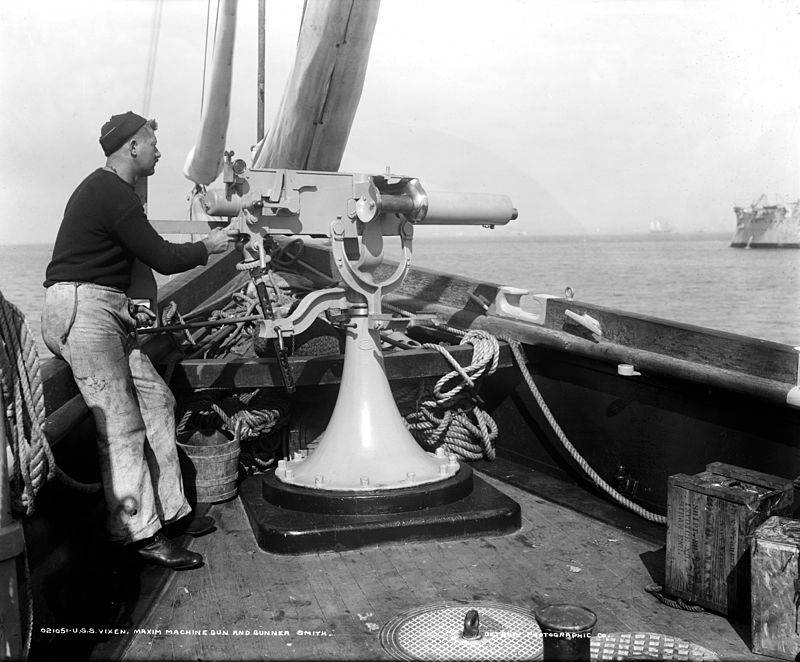 Simultaneously with the machine gun rifle caliber at the same time at the end of the 1880-s, Maxim created his enlarged version of the caliber 37-mm. It was a caliber that allowed the developed design to be used with a minimum of rework, but the weight of the projectile should not exceed 400 grams (0,88 pounds), since it was the lightest explosive projectile allowed to be used in accordance with the St. Petersburg 1868 declaration of the year and confirmed Hague Convention 1899. 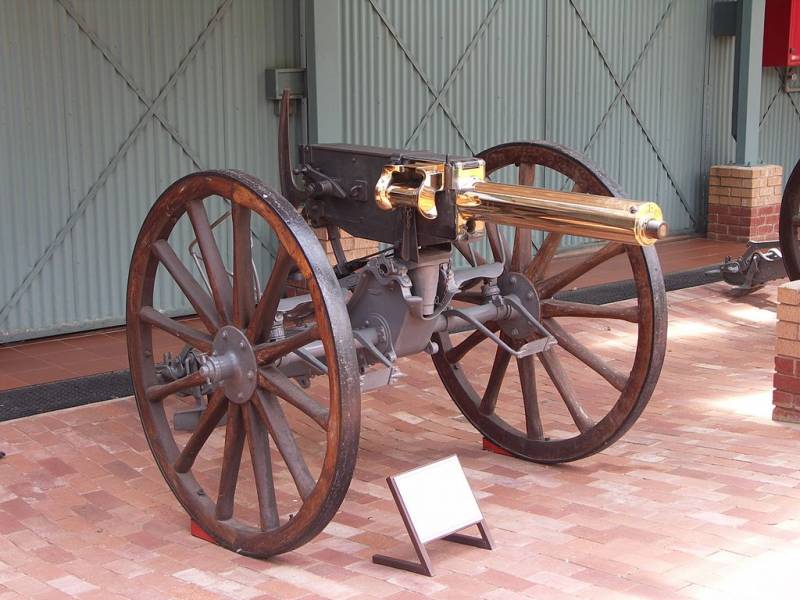 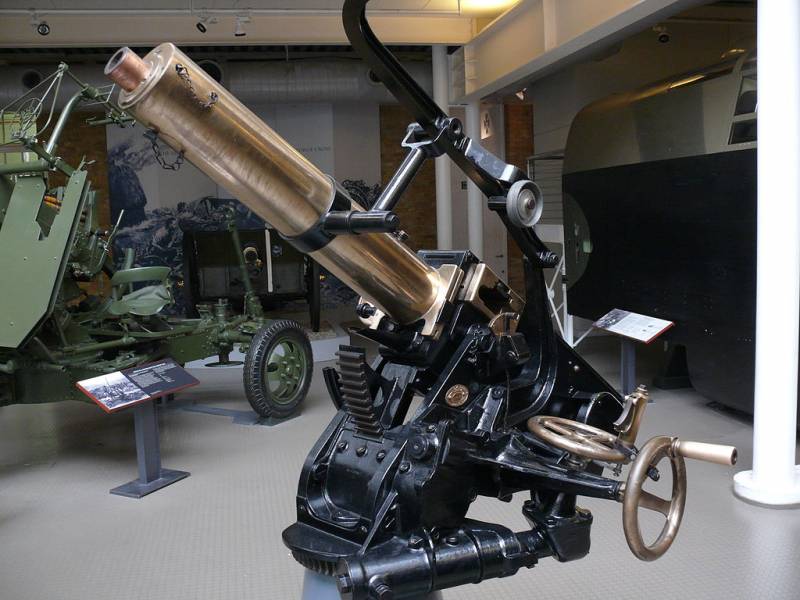 And his English equivalent of the sample 1903 g. (Imperial War Museum, London)

The early versions were sold under the brand Maxim-Nordenfeld, while the British service version (from 1900 of the year) was produced by Vickers, Sons and Maxim (VSM), since Vickers bought the assets of the Maxim-Nordenfeld company in 1897 year All of these samples are actually the same weapon. 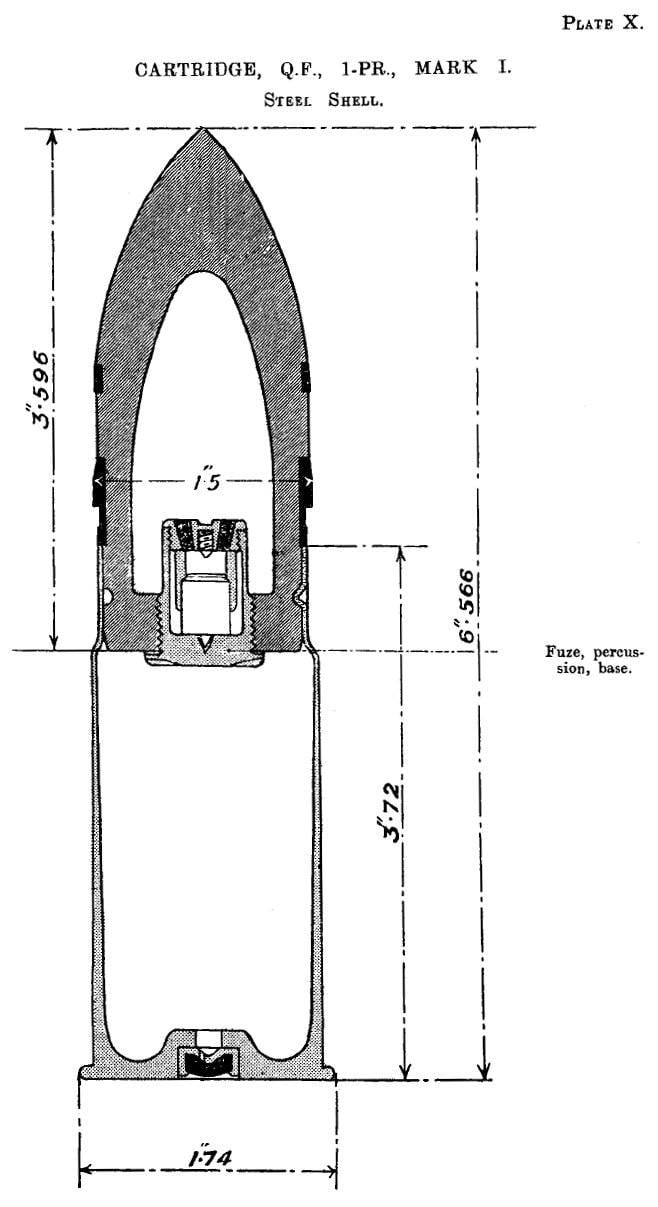 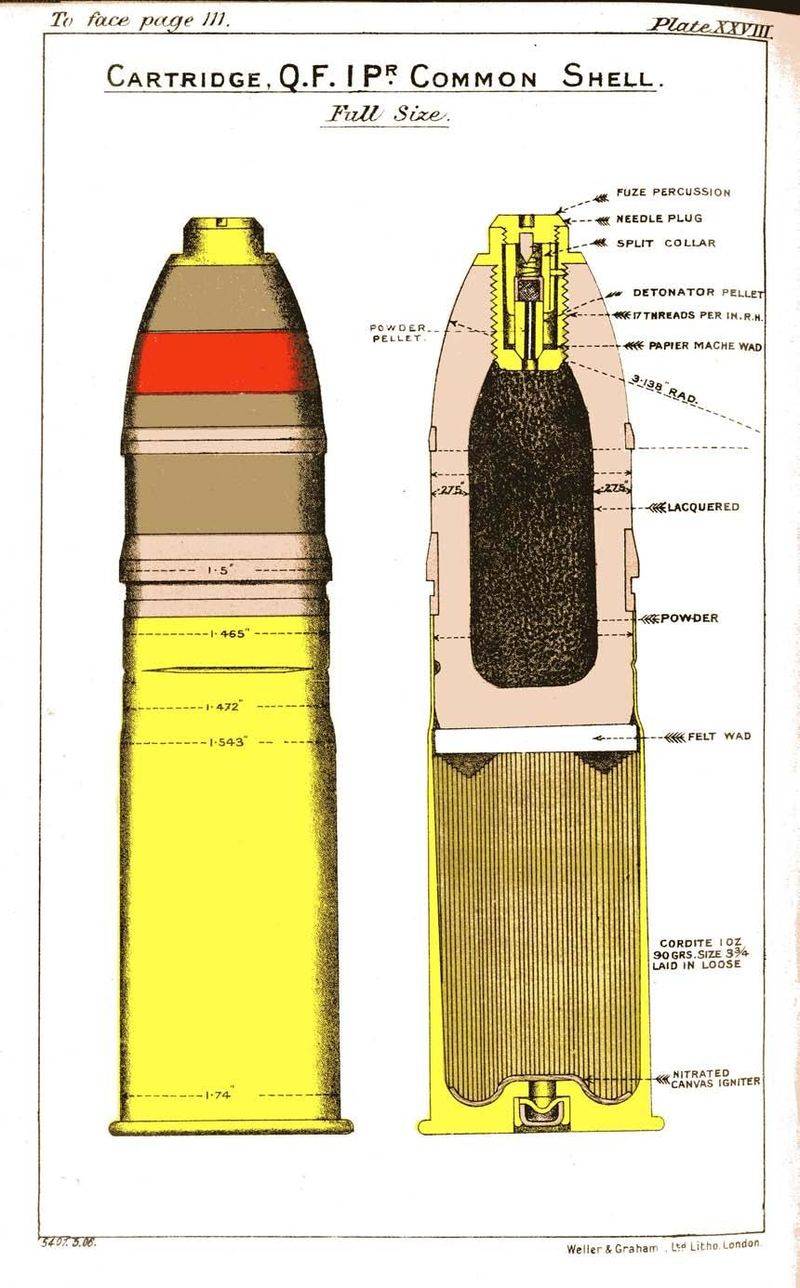 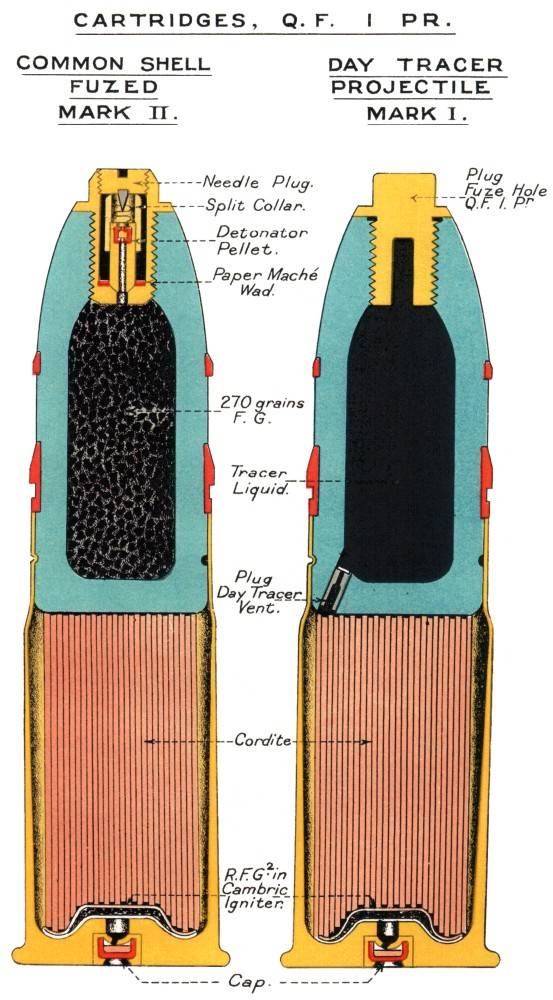 Tracer shells (on the right) were relied on, but they had no explosive charge.

At first, the British military rejected this proposal of Maxim and the 37-mm “autocannon” went on commercial sale, including to Germany, and from there it went to the Boers to South Africa just in time for the start of the Second Boer War. However, being under the fire of Maxim's guns, they quickly changed their minds and bought them for the British army. In the Transvaal was sent from 50 to 57 such guns, which have proven themselves in battles. At the same time, “pom pom poms” (as they were called for the characteristic sound of a shot) got into the fleet as an anti-cater and anti-carrier weapon. During the First World War, these guns were not used in the ground forces of the British Army, but were installed on ships as a means of air defense and Pearless armored vehicles, including those who fought in Russia as part of an armored division sent by the British.

Author:
V. Shpakovsky
Articles from this series:
Poem of Maxim (part of 1)