We have a machine gun "Maxim",
They have no Maxim "
(Hilary Belloc "New Traveler")

About the Maxim machine gun did not write except that lazy. But ... it always happens when you collect material for several years, it is, firstly, a lot, and secondly, there is a lot of it in it that previously escaped the attention of the authors. Therefore, sometimes it is worth returning to any topic, including the "topic of the Maxim machine gun, which fully pretends to become the most real" poem. " It is strange, of course, to feel respect for the person who became most famous for the fact that the invention he created killed the most people on planet Earth. But it just so happened that everyone just admires it, but he somehow forgotten that he created the device that killed the most mice - the mousetrap. By the way, it is for the mousetrap that he is worthy of the monument, and for his machine gun curses for ever and ever. But since we live in our traditional world ... then let it be the other way around. We will not break the tradition! And if so, then let us once again get to know the person who created this suicidal invention, and his machine gun himself.

Maxim was born in Sanguville, Maine, 5 February 1840 of the year. He became an apprentice to a blacksmith (according to other sources, a carriage master) at the age of 14 years, and ten years later got a job with his uncle Levi Stevens in Fitchburg, Massachusetts. Subsequently, he worked in different places and changed many professions. But everywhere he was distinguished by such qualities as an inquisitive mind and a desire for invention. 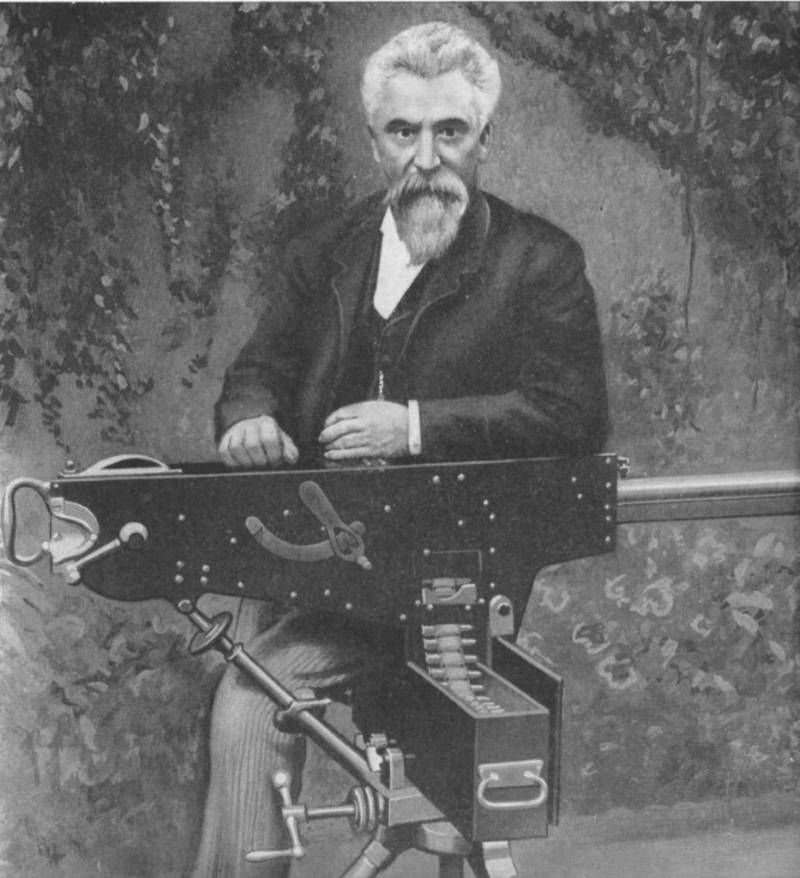 Interestingly, his brother, Maxim Hudson, was also a military inventor who specialized in the development of explosives. For the time being, they worked quite closely, but then they had disagreements over the patent for smokeless powder. The patent claimed by Hiram was signed by “H. Maxim ”, and that's why they quarreled. Now it is difficult to say which of them borrowed from whom, but the jealousy and disagreements between us caused such discord that he lasted throughout their rest of his life, which, by the way, Hudson stayed in the US, and Hiram was forced to leave for Europe. Two bears in one den turned closely!

Hiram Maxim first married Englishwoman Jane Badden, 11 May 1867, in Boston, Massachusetts. The children were born Hiram Percy Maxim, Florence Maxim and Adelaide Maxim. Hiram Percy Maxim followed in the footsteps of his father and uncle, and also became a mechanical engineer and designer weapons. He later wrote a book about his father called “The Genius in the Family,” containing about 60 funny stories from his life with his father. Most of these stories are very interesting and give the reader a visual idea of ​​the personal and family life of a person of such a multifaceted talent. Interestingly, in 1946, they even made a feature film for it. 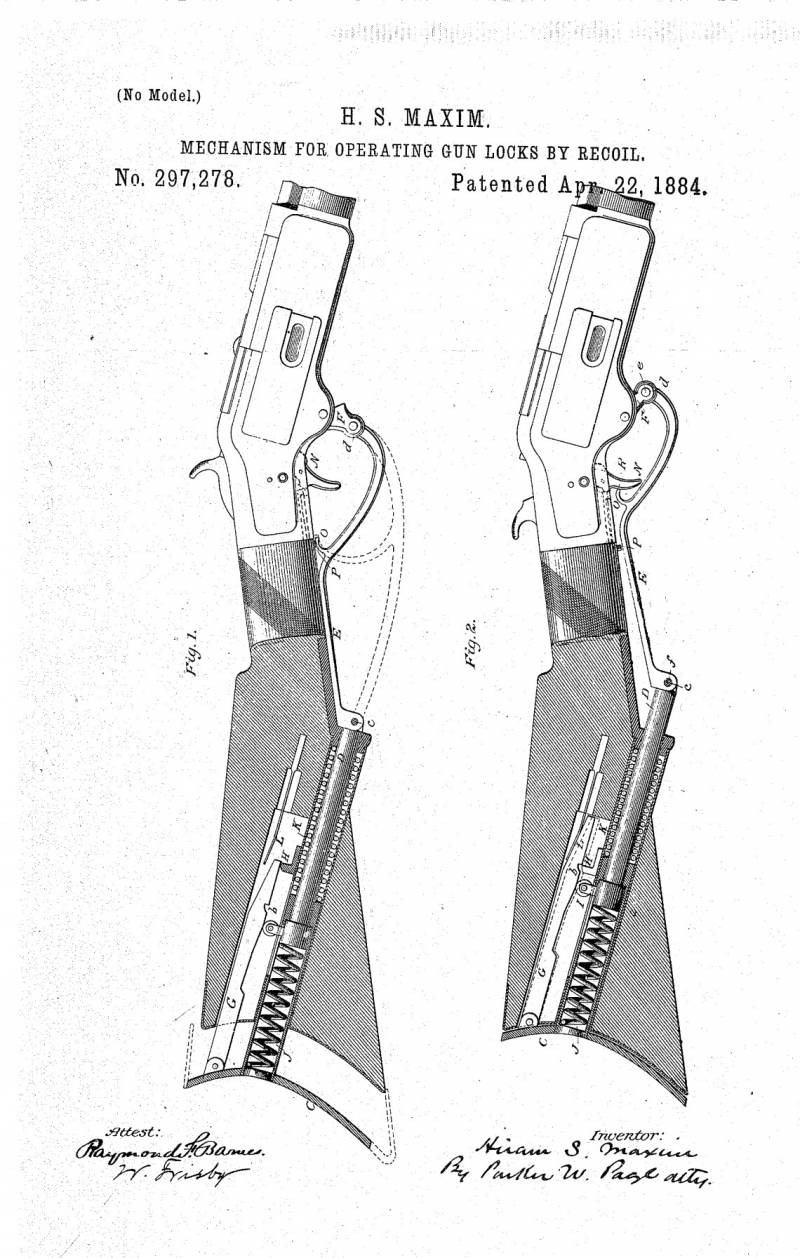 Patent No.297278 1884 of the M1876 hard drive recharging mechanism. As you can see, the device is very simple. The plate on the back of the butt is connected by a spring-loaded lever with a bolt. Recoil force plate tightened and simultaneously actuates the shutter. Everything is very simple. Easier than this system was perhaps that one of the first systems of automatic Browning rifles with a cup at the muzzle of the barrel with a crank and a long pull to the bolt. When fired, the bullet flew into the hole in the cup, but the gases pressed on it, threw back on the crank and forced the thrust and bolt to move. Very efficient design. But very uncomfortable!

For the second time, he married his secretary and mistress, Sarah, the daughter of Charles Haynes from Boston, in 1881. The marriage was registered at Westminster in London in 1890. In addition, there was a woman named Helen Leighton who claimed that he married her in the 1878 year and that "he deliberately committed bigamy" being married to his current wife Jane Badden. She claimed that she bore a daughter from him, whom he subsequently left 4 000 pounds sterling. It is quite possible (although the claims of this woman were not proved in court) that such generosity could have certain grounds.

Another Maxim patent for an automatic rifle. Massive bolt rests on the rod with a spring located in the tube in the butt. Well, there is even nothing to explain. Before us is a diagram of a finished submachine gun, which simply never occurred to anyone!

It must be said that Maxim was the author of a mass of useful inventions, and often they were born spontaneously, as far as he personally felt the need. For example, he suffered from bronchitis for a long time and ... manufactured, and then patented a pocket menthol inhaler, and then a larger desktop steam inhaler, which used coniferous steam, which, he said, could alleviate asthma, tinnitus , fight hay fever and Qatar. And when he was reproached that he added to his suffering people with his machine gun, he invariably replied that no one considered how many people he had brought relief from suffering. 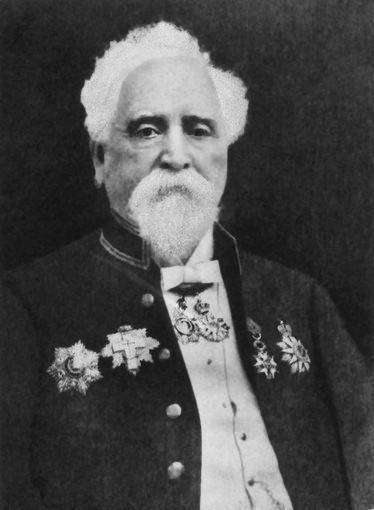 So, one large furniture factory often suffered from fires, and Maxim was invited for a consultation - how to prevent their recurrence. As a result, Maxim invented the first automatic fire sprinkler, which also reported a fire to the fire station. He also developed and installed the first electric lights in New York (“Fair building of life” on the No. 120 on Broadway) at the end of the 1870s. About how significant were his work in the field of electrification, testifies to his litigation with Edison himself over patent rights to the incandescent bulb. Working in this area, he came to England in the 1881 year to reorganize the London offices of the Electric Electricing Company. And here in Vienna (at least that's what the legend says, the author of which was most likely himself) in 1882, he met an American friend who advised him to quit chemistry and electricity and come up with something deadly, because that’s good to earn. 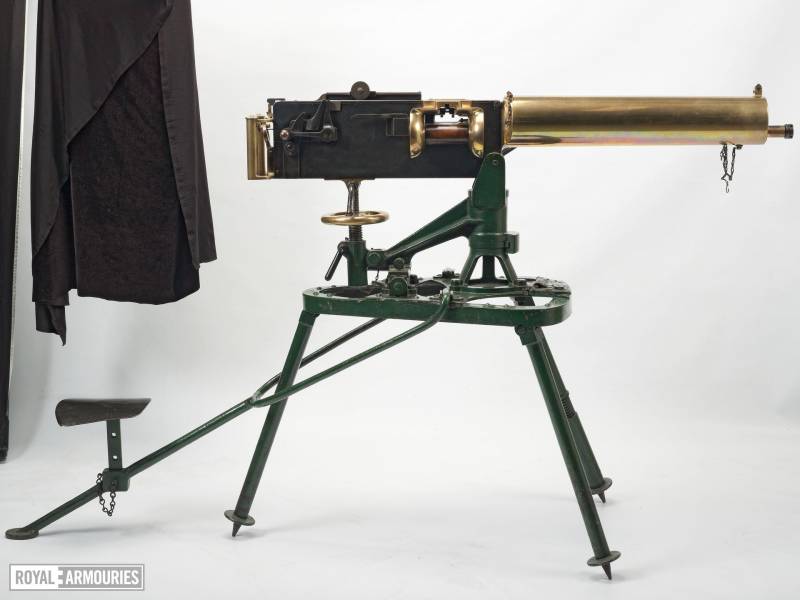 And I must say that in his childhood Maxim was knocked down by the recoil of the rifle butt when fired, and this made him think of using this recoil to create an automatically reloaded weapon. In the period from 1883 to 1885, Maxim patented a number of mechanisms using the recoil force. It was then that he moved to England, settled in a large house, formerly owned by Lord Thurlow in West Norwood, where he developed his machine gun, which operated with recoil energy. In the local press, he announced that he was going to experiment with firearms in his garden, and asked his neighbors to open their windows in order to avoid trouble with broken glasses. 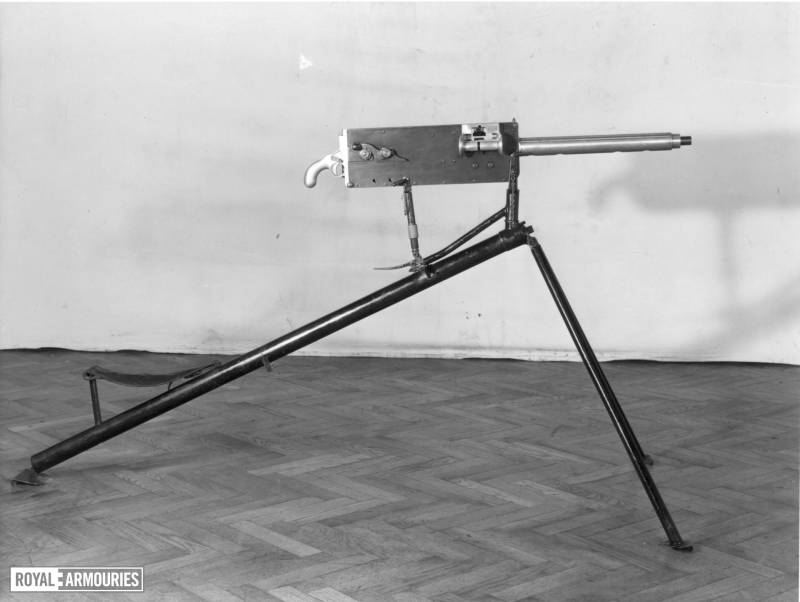 “Maxim-Nordenfeld” is an ultra-lightweight model of 1895. At that time, the idea of ​​water cooling the barrel and all this fussing with water topping up seemed absurd to many military men. They rightly noted that the soldiers could have far from always water, especially in such quantities as the Maxim machine gun had devoured it. In addition, with a water jacket and water in it, it was much harder than without them. In general, the weapon, in their opinion, was too heavy ... And Maxim didn’t argue, but he immediately made a model of a machine gun, firstly, extremely lightweight, and secondly - with air cooling. 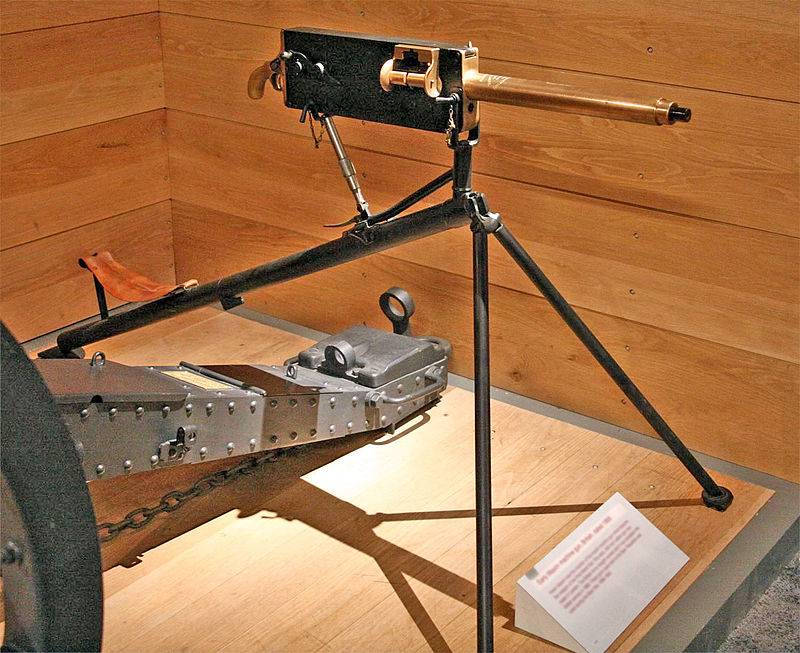 Note also that Maxim was not only a good inventor, but also a skillful manager. He regularly invited to the demonstration of his machine guns crowned persons of different countries, and when they honored him with his visit, he took pictures with them and immediately published these photos in print! 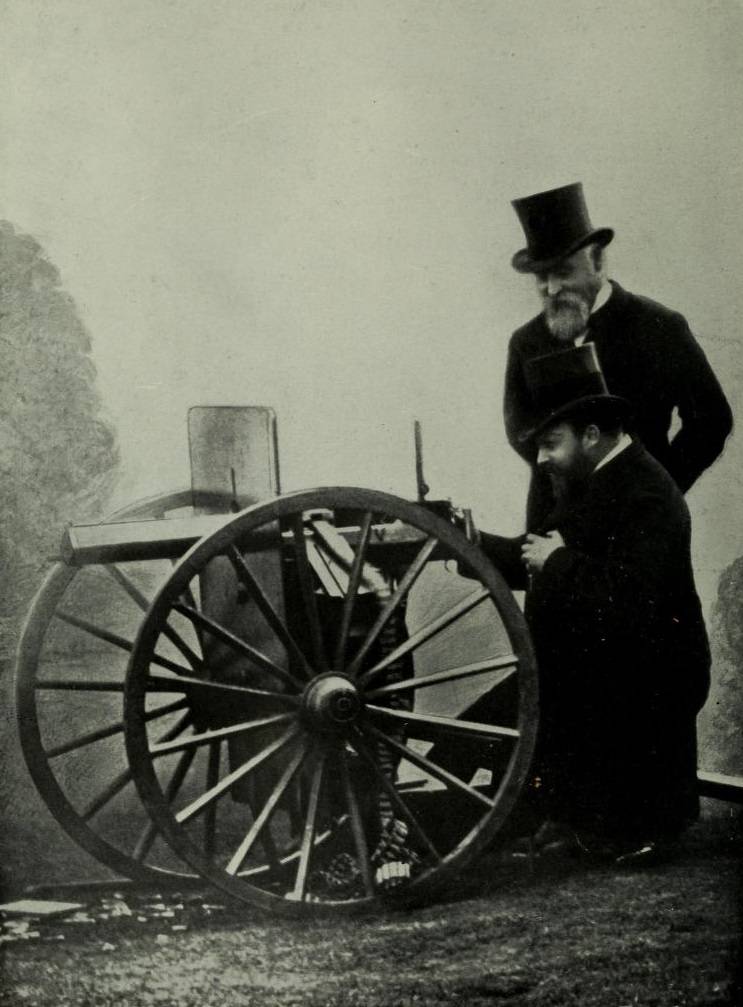 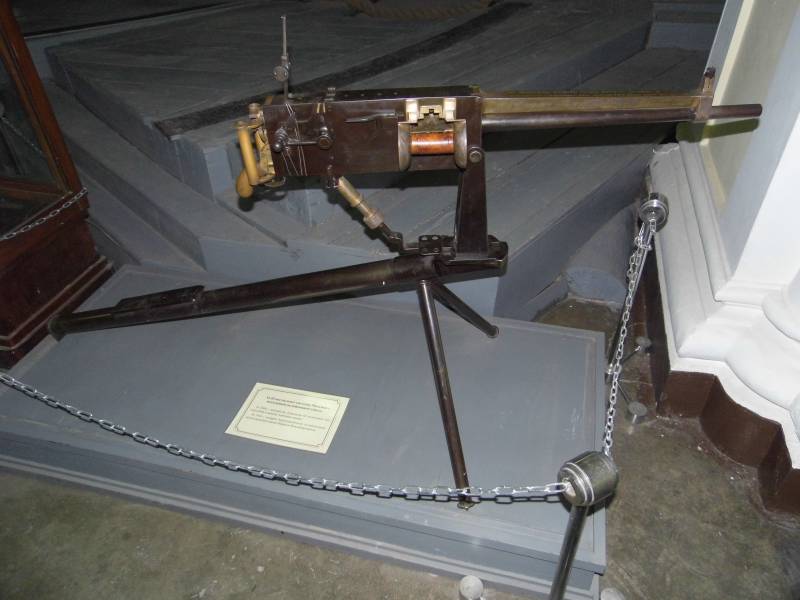 8 March 1888 of the year from the Maxim machine gun was fired by the Russian emperor Alexander III in the arena of the Anichkov Palace. After the tests, representatives of the Russian military department ordered Maxim 12 machine guns of the 1885 model of the year under the 10,67-mm cartridge of Berdan rifle. In 1914, this machine gun was presented to the Artillery Historical Museum in St. Petersburg by the Grand Duke Boris Vladimirovich. For some reason, the caliber of the signature under the machine gun is 11,43-mm. The museum workers were wrong. Berdan's rifle had a caliber in 4,2 Russian lines, which is exactly 10,67-mm. (Photo by N. Mikhailov) 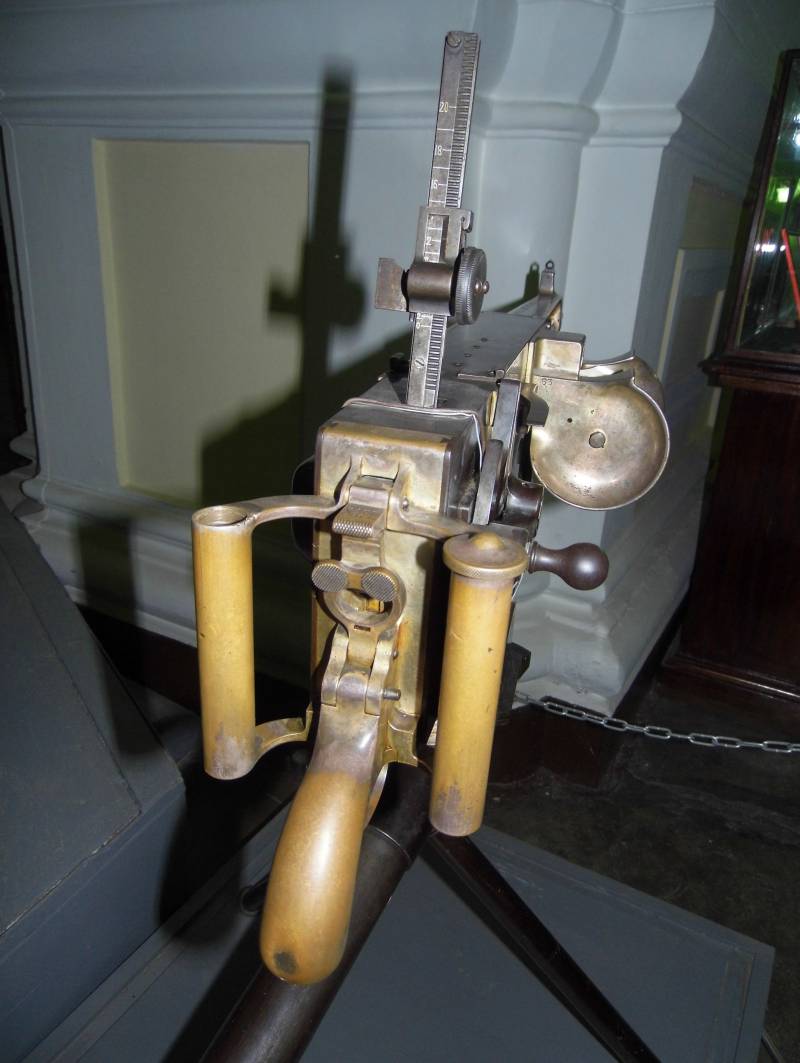 A very interesting sample, and above all that it has both a pistol grip and a trigger, as well as a handle with a trigger. That is ... to choose from! If you want - so, you want - here is the commercial: “Any whim for your money!” A wonderful marketing ploy. (Photo by N. Mikhailov)